I’ve been lucky enough to do quite a lot of travelling this year, but the list of places I want to visit only ever seems to get longer. I find that one of the best ways to deal with that feeling of wanderlust is to travel vicariously through the writings of others, and I’ve read a lot of travel books over the last 12 months, so I thought I’d share some of my favourites…

On the Trail of Genghis Khan: An Epic Journey Through the Land of the Nomads
Tim Cope, 2013 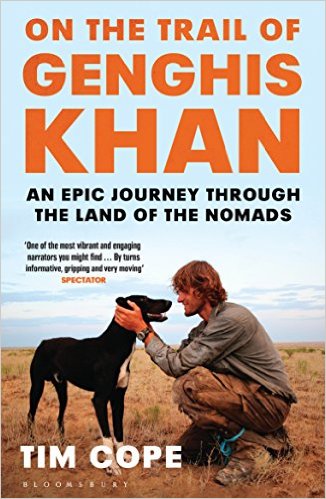 In the run-up to our trip to Uzbekistan I read a lot of books about Central Asia, and I think this book captured the essence of the region better than most. The author is an Australian who decided to travel over 6,000 miles across the vast Central Asian steppe from Mongolia to Hungary on horseback, following a similar route to that of Genghis Khan and his marauding Mongol hordes. While the writing is perhaps not as polished as some of the other authors on this list, what this book does exceptionally well is to convery the sheer scale of the journey and the harsh nature of life on the steppe. I felt a little bit traumatised just reading Cope’s descriptions of the bitter cold of a Kazakh winter, and the searing heat of the mosquito-infested steppe in high summer. He also gives a real insight into the lives and traditions of those who live on the steppe, in a way that would be difficult for an author travelling across the region using more conventional modes of transport. His journey took three years in total, and that sense of time and distance is what really stuck with me after I finished the book.

The Almost Nearly Perfect People – Behind the Myth of the Scandinavian Utopia
Michael Booth, 2014 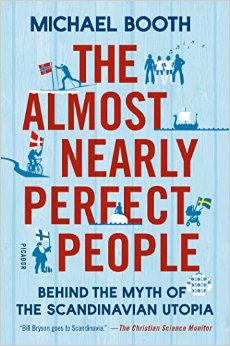 It’s fair to say that the UK has gone a bit Scandi-crazy in recent years, what with the burgeoning popularity of Nordic noir and mid-century modern Danish furniture, as well as the fetishisation of the Scandinavian model of social democracy. This book, written by a Brit who lives in Denmark, is a more nuanced take on the realities of life in the Nordic countries, questioning some of the accepted wisdom around the ‘almost nearly perfect people’ of the title. The book is full of interesting facts – did you know that 54% of Icelanders believe in elves? – along with insights into the distinct national character of each country. The Danes, who are the happiest people in the world despite also paying the highest taxes, have a bizarre obsession with the twee and difficult-to-define concept of hygge; Swedes have no concept of personal space, and will barge into you on public transport; the stoical and resilient Finns, who have endured a difficult history of domination by their Russian and Swedish neighbours, are prone to getting blind drunk and fighting; and the Norwegians really love their flag. It’s a book that seeks to challenge the prevailing rose-tinted view of the Nordic countries, but at the same time it’s very funny, and the author clearly has a lot of affection for the region.

Between the Woods and the Water
Patrick Leigh Fermor, 1986 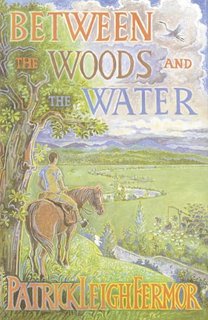 Patrick Leigh Fermor is widely considered as one of the great travel writers of the twentieth century, and with good reason. His writing goes beyond simply describing a journey or a place, weaving an incredibly rich contextual tapestry of history, art, music, linguistics and literature, with an uncommon gift for florid and evocative prose. Between the Woods and the Water is the second in a trilogy that describes a journey he undertook in the 1930s, walking from the Hook of Holland to Istanbul. Though the people he meets in the books were of course oblivious, the Europe described here was about to be changed forever by the calamity of the Second World War, and this knowledge tempers the more joyful encounters with a sense of melancholy and foreboding. This volume deals with Leigh Fermor’s journey through Hungary and Romania, and he spends much of his time in an aristicratic milieu that was about to be snuffed out forever in Eastern Europe; first by war, then by Soviet occupation. The books are all the more remarkable for the fact that they were written decades later, from a combination of meticulously kept diaries and remarkably clear memories. As with Tim Cope’s book, there is something about the slower pace of crossing the continent on foot that adds a depth and a substance to the portrayal of each country and the people who lived there. 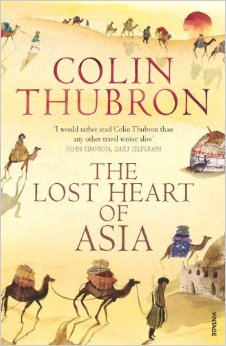 I included Colin Thubron’s more recent book about Central Asia, Shadow of the Silk Road, in my round-up of the best travel books I read in 2014, but I preferred this one. In The Lost Heart of Asia Thubron is travelling through a region still in something of a daze after the collapse of the Soviet Union, and the unplanned-for independence of the five Central Asian republics. There is not a huge amount of optimism on display from the people he meets during his travels, and it’s fascinating to compare the hopes and fears he describes with the reality of Central Asia today. While some fears have proved to be well-founded – the region remains characterised by political repression and economic dysfunction, and many Central Asians have had to move to Russia to find work – others, such as the spectre of fundamentalist Islam, have so far been kept at bay. I read this book after we’d returned from Uzbekistan, and unlike when I read Shadow of the Silk Road I had a clear picture in my head of many of the places the author visits, so I found it particularly interesting to compare Thubron’s descriptions of places like Samarkand and Bukhara in the early ’90s with my own experiences in 2015.

What inspired your travels in 2015? Any tips for what I should read in 2016? Let me know in the comments below!

One of the many misconceptions informing the current debate around migration and the Syrian refugee crisis is the idea that the presence of Islam in western Europe is a new phenomenon. Even a

I rubbed the sleep from my bleary eyes as our taxi driver, unfeasibly chirpy for six o’clock on a Monday morning, fired yet more questions at us. “What about the basilica, did