"You should see the town," said the cyclist, speaking loudly into his phone in a booming Welsh baritone. "It's full of them, tourists. Spreading it about, I bet."

He glanced around as he spoke, checking to make sure everyone could hear him, while adjusting the lycra all-in-one that clung to his considerable frame like a wetsuit. Down below on Tenby's wide golden beach, an ice cream van chugged along the sand under grey-streaked skies.

"They're thick as shit, I'm telling you."

We had arrived in Wales just a few weeks after the country had reopened to tourists, and the prospect of holidaymakers flooding in from Covid-19 hotspots clearly had some people feeling nervous. Although I didn't feel that Captain Lycra's characterisation was entirely fair, I had some sympathy with the locals. Tenby is somewhat unusual for a British town, with the historic centre hemmed in by 13th-century Norman walls, and the narrow streets were crammed full of people. Social distancing was pretty much impossible, and it did seem that many visitors had simply given up on the idea. Happily we had only stopped off in the town for lunch, and the remainder of our stay in Pembrokeshire would be spent exploring quieter reaches of the countryside.

For this part of our Welsh holiday we met up with Polly's parents, who came armed with Ordnance Survey maps and local knowledge gleaned during numerous visits to Pembrokeshire over the years. We stayed at a hotel in St Florence, a pretty little village a few miles inland from Tenby, and our first night coincided with the arrival of Storm Francis, an unusually fierce August weather system. We awoke to the sound of gale-force winds and lashing rain, and news that the next village along from us was flooded. Luckily we had come up with a sensible plan for the day: a walk through a forest of tall trees, across an exposed expanse of farmland and along a clifftop path.

We set out from the 13th-century Stackpole Elidor church, cradled in a wooded valley with a slender, ivy-clad tower. We entered the Stackpole Estate, managed by the National Trust, and followed a path down into a damp forest carpeted with ferns. You're never far from water in Wales, and the muddy path skirted close to a gushing stream, while rain dripped down from the canopy overhead. Signs had been posted on the gates of the estate warning against entering the forest during high winds, but the storm seemed to have eased off a little, so we took our chances and quickly made our way through the trees.

Emerging from the forest we were hit by a wall of wind, and striding across the green fields felt like walking through treacle. There was a loud crack behind us; the sound of a tree snapping in two.

We weren't the only ones struggling with the gales. A flock of swifts were trying repeatedly to launch themselves from their perch on a wooden fence, but the wind pinned them back, keeping them almost suspended in mid-air. Some of the birds seemed to have given up, and simply sat on the fence, gripping on for dear life.

Pembrokeshire is rightly famous for its spectacular coastal scenery, and while a clifftop walk in the middle of a storm may not be the cleverest idea, the weather only added to the sense of drama, and the feeling of being at the ragged edge of Britain. As we followed the path along the coast the wind was blasting in off the sea towards us, rather less dangerous than if it had been blowing in the opposite direction. Down below we could see the churning waves crashing against the rocks, and in places the wind carried great globs of spume up off the water and dashed them across our path. We stopped for a sit down on the beautiful beach at Barafundle Bay, where we watched a group of hardy surfers making the most of the breakers rolling in.

Just the other side of the beach was a little café where we had lunch, before walking back along the road to Stackpole, still buffeted by the wind on the narrow country lanes. Later that day we discovered that we had got off pretty lightly, with flooding, power cuts and transport disruption reported across Wales thanks to the storm; just along the coast from us, at St Clears, a campsite had been evacuated by the fire brigade after being cut off by flooding.

By the following morning the storm had calmed and the sun was out. Our plan for the day was a walk around the Angle Peninsula, which sits out on a limb on the southern side of the Milford Haven Waterway. This deep natural harbour was formed at the end of the last Ice Age when rising sea levels flooded a river valley, and it's an important shipping channel for both industrial traffic and the Irish ferry service between Pembroke and Rosslare.

As we set out on our walk from the village of Angle this was immediately apparent, with the clustered chimneys of the Valero Pembroke Refinery dominating the landscape. A 19th-century fort, built to defend against invasion by the French, sat in the middle of the waterway, and we watched little pilot boats guide huge oil tankers out towards the Irish sea. The ships were incongruous amongst the bucolic calm of the Pembrokeshire countryside, and there was something unsettling about the contrast between heavy industry and natural beauty. Some readers may recall that in 1996 the Milford Haven Waterway was the site of one of Britain's worst ever environmental disasters, when the MV Sea Empress ran aground and spilled 72,000 tons of crude oil in the middle of a marine conservation area.

Our walk followed a section of the Pembrokeshire Coast Path, a 186-mile trail first established in 1970. We found ourselves on a narrow path between two hedgerows that exhibited surprising biodiversity, heavy with honeysuckle, blackberries and plump purplish sloes. Ferns brushed our feet, birds rustled overhead amongst bursts of red hawthorn berries, and the hedges hummed with bumblebees, dragonflies and several species of butterfly. Occasionally we encountered people coming the other way, and one party would manoeuvre themselves halfway into a bush to allow a modicum of social distancing. We also took to opening gates with a stick where possible, to cut down on the amount of hand sanitising. But these were small annoyances, and well worth it to be out in the fresh air, with thoughts of Covid-19 largely left behind in London.

We followed the Coast Path around the headland, with fine views out towards Thorne Island, and beyond it the Marloes Peninsula. We passed sheltered bays, caravan parks and sandy beaches busy with families, before climbing a slight incline to a scenic (if slightly windswept) picnic spot. Here we stopped for lunch, overlooking a crumbling fort perched on a promontory known as Rat Island.

It was tempting to continue on the Coast Path to the more remote southern shore of the Angle Peninsula, but we decided to take the easier route and retraced our steps, until we met the main road that took us back to Angle village. Once again, the jarring sight of the refinery hovered on the horizon. We stopped to have a quick look at Angle's pretty church (still closed due to Covid-19), behind which was a tiny sailor's chapel dating back to the 15th century.

Once we were back in the car we followed the scenic route to St Florence, driving past the undulating sand dunes of Freshwater West beach. We took a brief detour down to the Elegug Stacks, which involved driving through the Castlemartin army firing range past barbed wire and decommissioned tanks. The range is closed when exercises are taking place, but we were lucky and picked a day when the road was open. The Elegug Stacks are dramatic rock formations that take their name from the Welsh word for guillemots, seabirds that nest here in their thousands in early summer. They were all gone by August, but we did spot a few seals swimming in the water down below, the first time I'd ever seen them in the UK.

Even more spectacular than the stacks is the neighbouring Green Bridge of Wales, a natural rock arch which juts out into the roiling seas. This is the view that graces many postcards from Pembrokeshire, and it felt like one of the few spots where you could compose a photo that really captured the raw beauty of this coastline. It was also a reminder of the power of those waves, so easily awakened by storms barrelling in from the Atlantic. 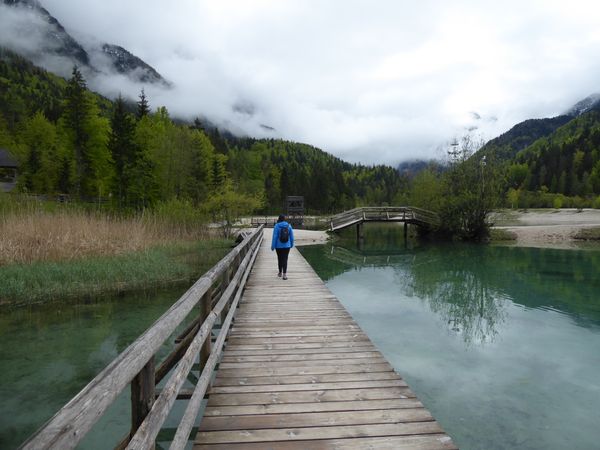 It was when the waitress brought out the lard on toast that I knew I was going to like Kranjska Gora. We had arrived on a grey and drizzly day in the Julian Alps, and a TripAdvisor tip-off had directed us down a narrow street to Lačni Kekec [http://www.