If you’ve only ever heard of one place in Central Asia, it’s probably Samarkand. This ancient city, one of the most important stops on the old Silk Road, once shared the same near-mythical status as Timbuktu and Shangri-La, and became renowned for its fantastical architecture during the reign of the fearsome Emir Timur in the 14th century. It’s one of those places, like Venice or the Grand Canyon, that gets showered with so much hyperbolic prose that I wondered whether it could ever live up to its reputation in reality.

And there were suggestions that it might not. The Lonely Planet guide warns of the “disneyfication” of Timur’s famous monuments, and of an Old Town rendered “sterile” by the Uzbek authorities building walls around it. I had also recently read Colin Thubron’s 2006 book Shadow of the Silk Road, in which he complains of restoration work “snuffing out the strange vitality of ruin, and building in its place a shining blandness”.

My initial emotion on arrival in Samarkand was, I will admit, a tinge of disappointment. Our hotel was just a five minute walk from the Registan Square, probably the most famous sight in all of Central Asia, where three huge madrassas tower overhead, each pitching forward at just enough of an angle to make you wonder if you’re hallucinating in the heat. The facades shimmer with a vivid veneer of incredibly ornate tilework, flanked by enormous minarets built in an almost Greco-Roman style, resembling huge, psychedelic Doric columns. Golden sun motifs and strange lion-tiger hybrids burst from the walls, while all around are bulbous, fluted turquoise domes. The cumulative aesthetic effect of such an explosion of colour is almost overwhelming, the symmetry and precision simply stunning. And yet… 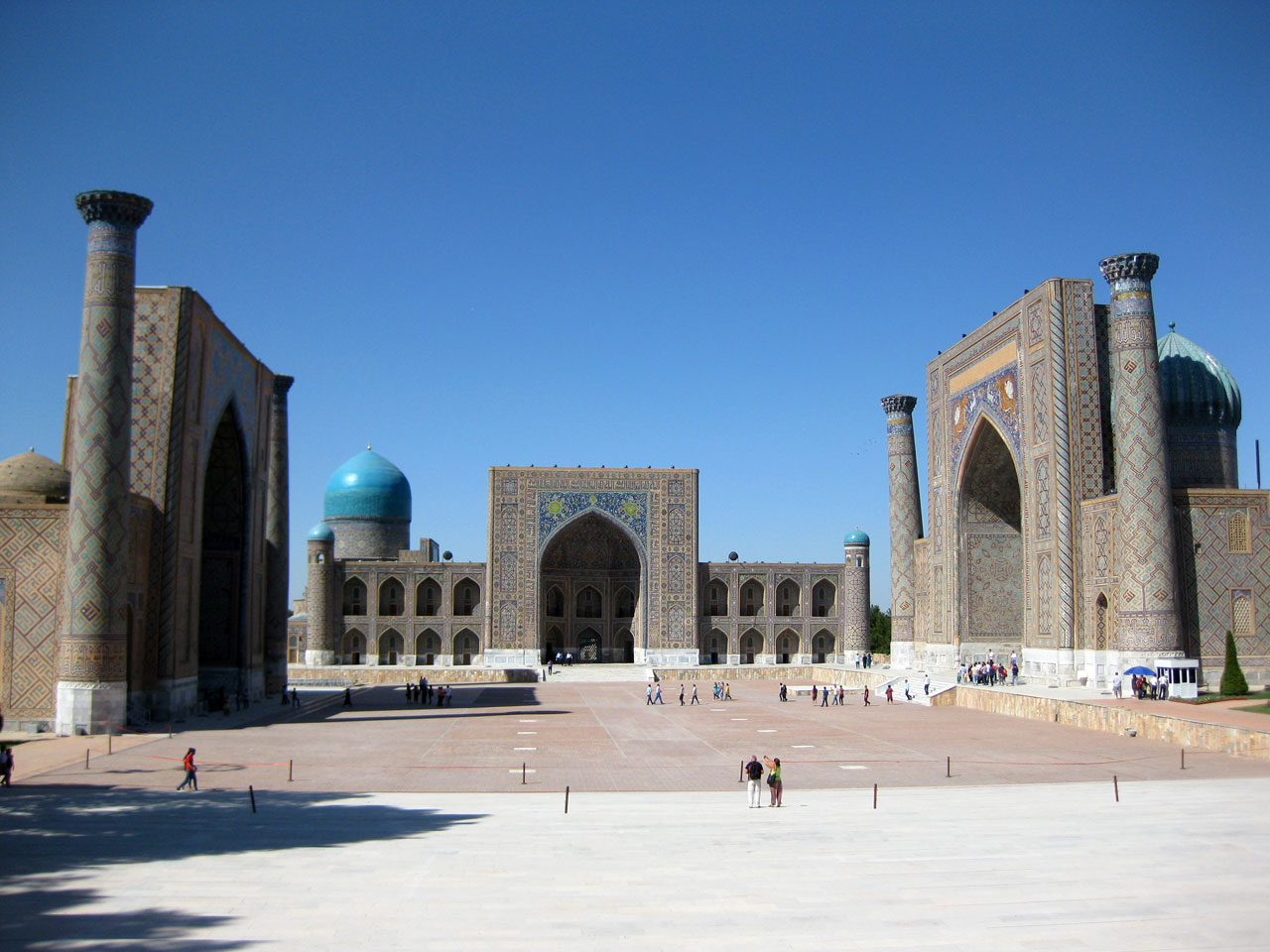 It feels churlish saying so, ungrateful even, but the Registan wasn’t what I was expecting. Perhaps it’s my own fault, but I’d been labouring under the mistaken impression that the Registan was still the centre of life in Samarkand, a bustling square at the heart of an ancient city. But Samarkand isn’t quite like that any more. The Registan, incredible though it is, is surrounded by a carefully manicured park, which is in turn ringed by busy roads, giving it the impression of being almost cut adrift from the rest of the city. The central square is roped off, and you have to buy a ticket if you want to enter what was once a public space. Samarkand is actually a pretty modern city, and the other relics of Timur’s rule are similarly marooned in various locations around the city rather than concentrated in one place. It’s quite different to Bukhara, lacking that same sort of stylistically homogenous historic centre. 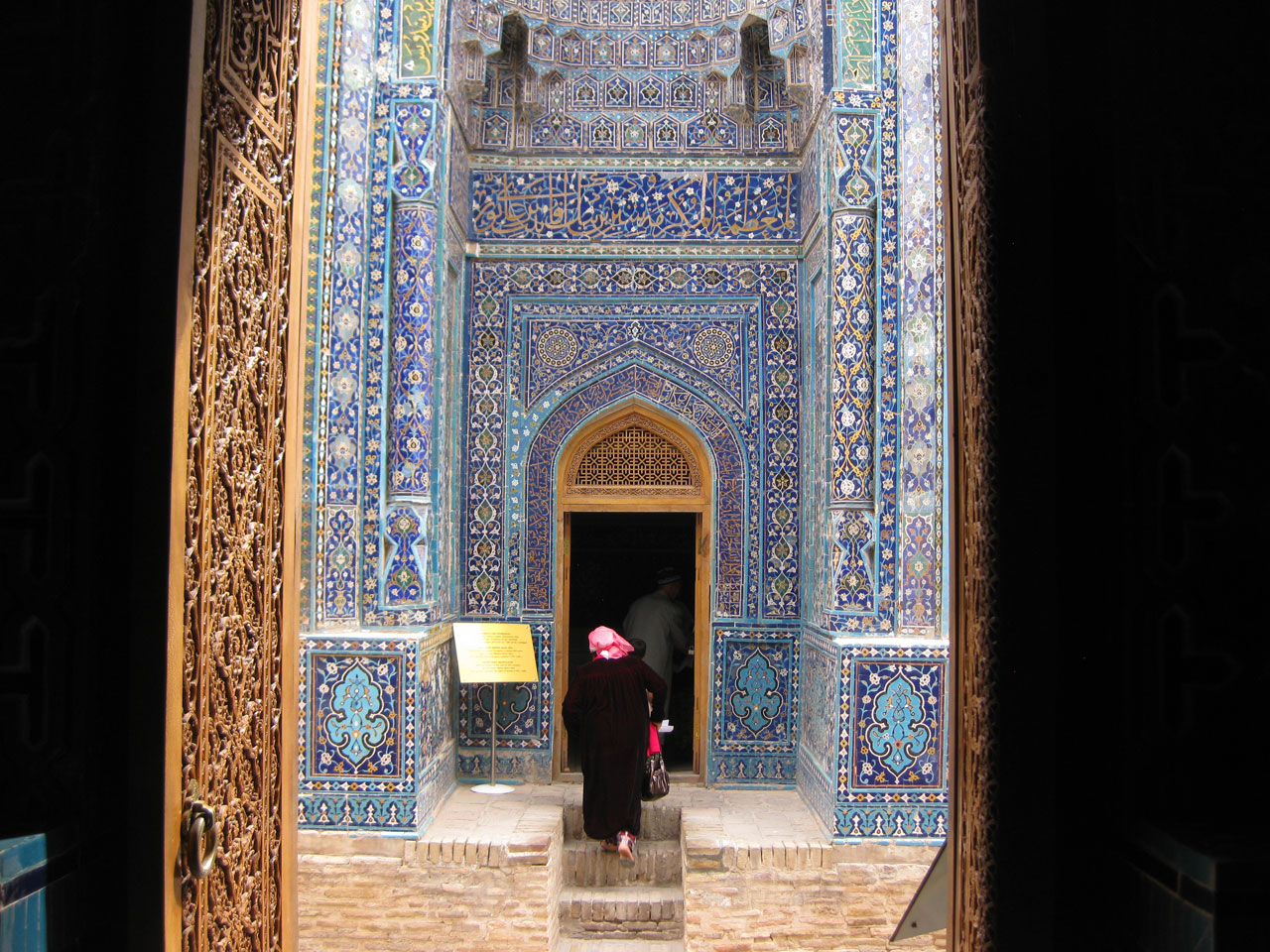 In a way it’s funny to talk of the ‘disneyfication’ of Samarkand, because it could be argued that Timur himself conceived of his capital in a fairly superficial way. The story of this fearsome Turco-Mongol warlord with a limp, also known as Tamerlane (‘Timur the Lame’), is not often told in the West, and he is a lot less well known than that other great Central Asian conqueror, Genghis Khan. Timur may even have been a relative of the great Khan, and he rose from obscure beginnings to build an empire that rapidly expanded out from Central Asia and swallowed up most of modern day Iraq, Iran and northern India. He is generally remembered as a cruel and bloodthirsty tyrant, slaughtering hundreds of thousands of people and razing cities to the ground as he rampaged across Asia. But he was also something of a collector, amassing treasures and artisans from across his conquered lands in order to build his astonishing capital at Samarkand, a monument to his own munificence in much the same way that the present day rulers of Central Asia fill their capitals with marble and gold. 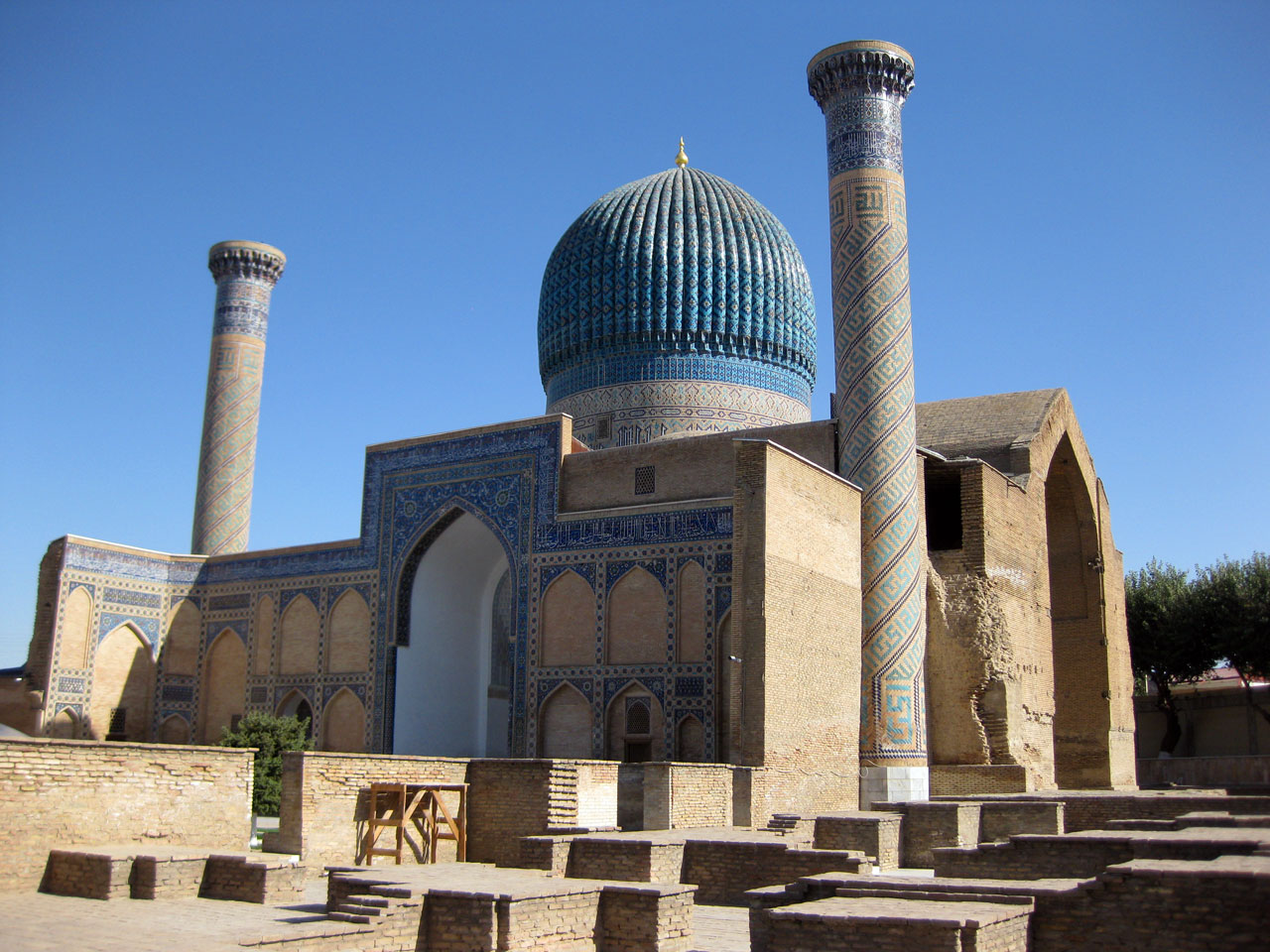 After the initial disappointment of the slightly lifeless Registan, Timur’s capital did begin to work its magic on us. First we headed to the Gur-e-Amir mausoleum, where the Emir himself was interred in 1405. On the outside it’s a simple but attractive building in the same highly idiosyncratic Timurid style as the Registan, crowned by a ribbed turquoise dome and flanked by flat-topped minarets. But it’s the inside of the Gur-e-Amir that really blows you away, the soaring walls covered with intricate motifs in blue and gold that seem to radiate a sort of celestial light as the sun bounces off them. It really doesn’t matter that most of what you’re looking at has been heavily restored; it’s a breathtaking sight, whoever applied the last lick of paint. 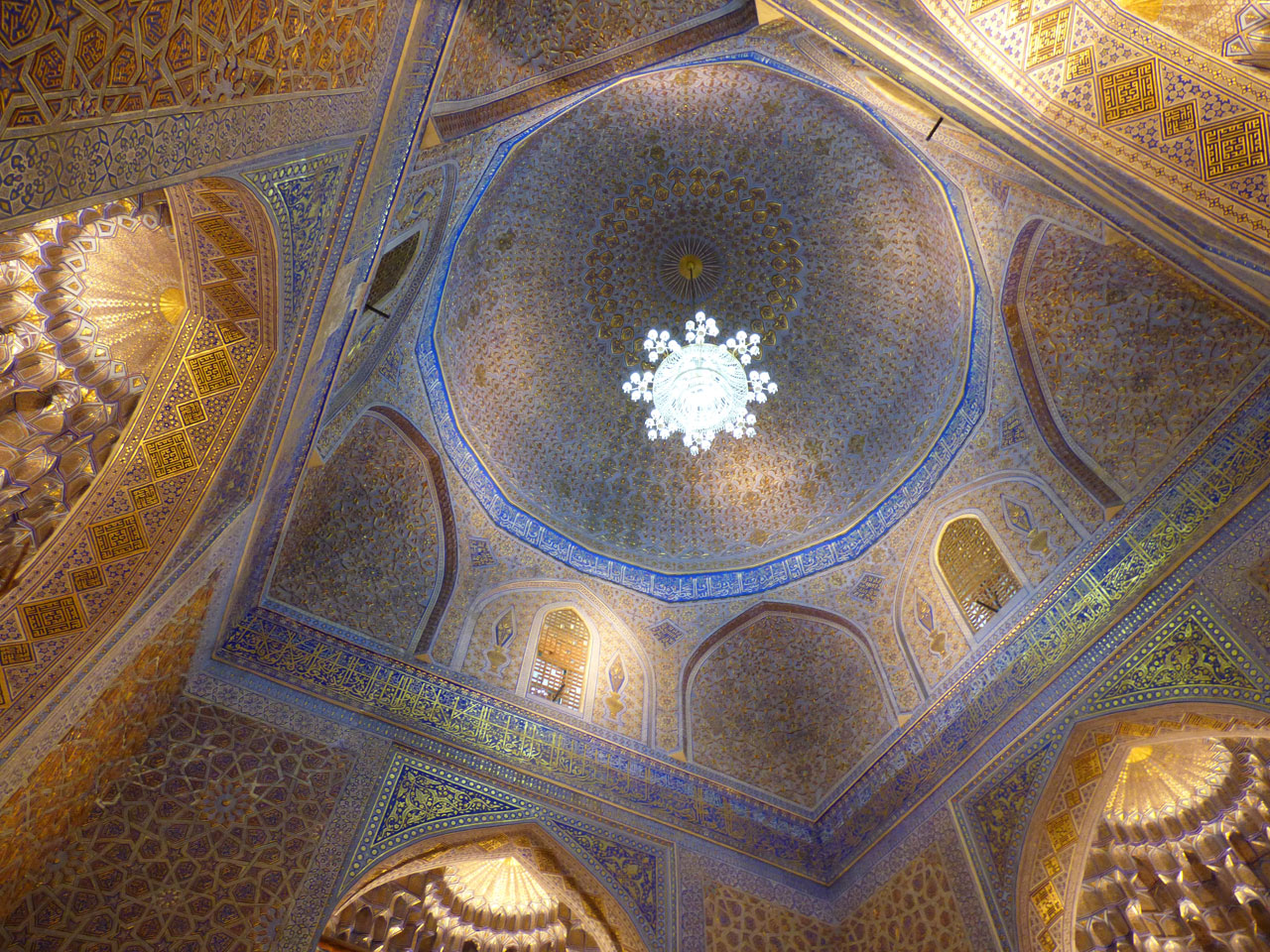 For the purists, however, or those who are simply interested in comparing past and present, it is still possible to get an idea of what Samarkand’s Timurid monuments would have looked like prior to restoration. We took a trip out to a town called Shakhrisabz, a couple of hours south of Samarkand towards the Afghan border, near where Timur was born and where more remnants of his reign stand crumbling in the harsh glare of the desert sun. Restoration work has still barely begun here, and there is something particularly poignant about the ruined gate of the great Ak Saray Palace, which stands desolate and alone like some forgotten sentinel. It’s said that Shakhrisabz in its prime was even more impressive than Samarkand, and when you stand looking up at what’s left of the Ak Saray, and remember that this was just the gate, it’s mindboggling to think how big the palace must have been. 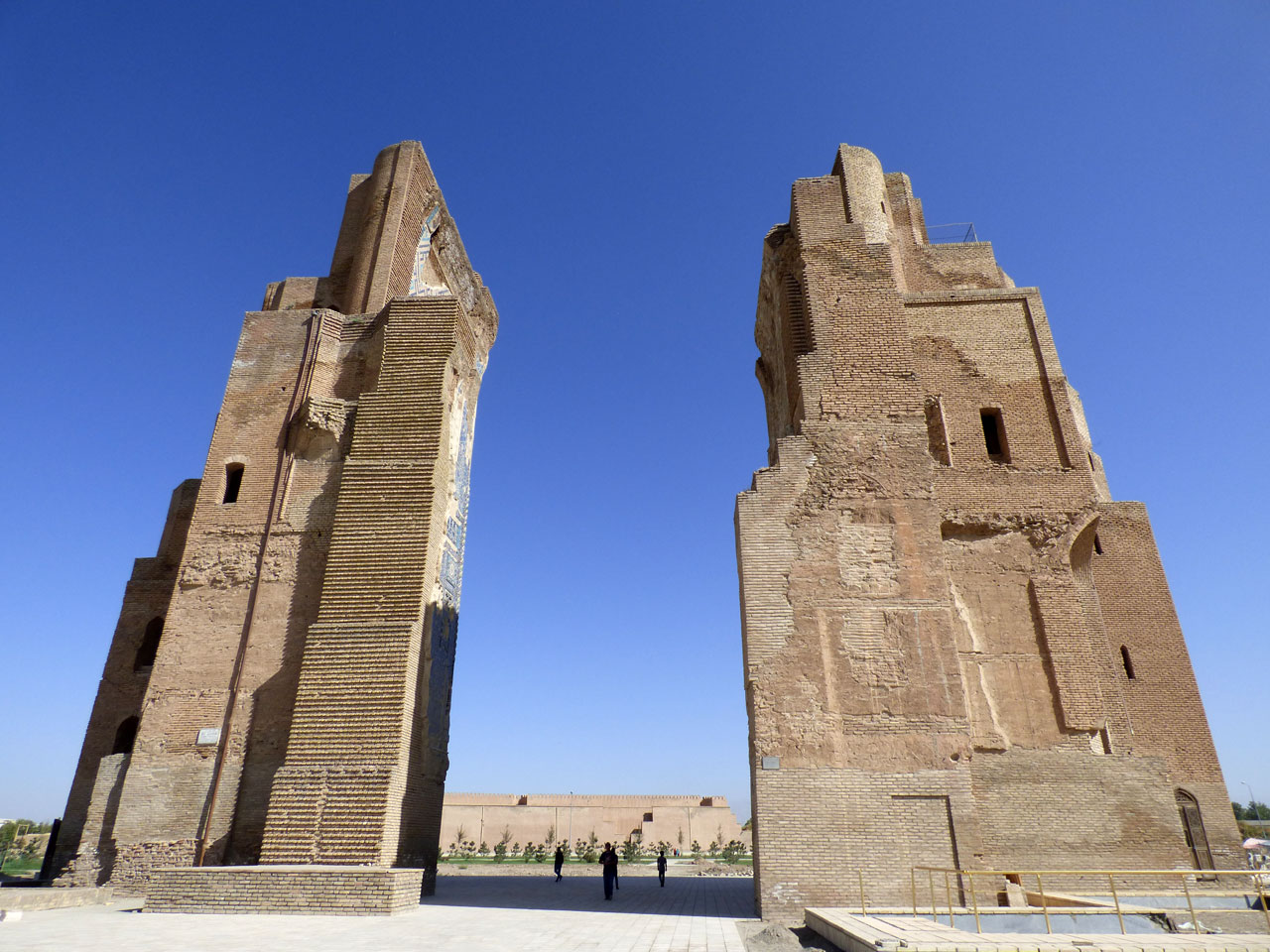 We were also lucky enough to see the work-in-progress restoration of the nearby Gumbazi Seyidan mausoleum, where we watched a local craftsman carrying out the painstaking work of repainting the tiles on the interior walls. It really brought home just how highly skilled and time-consuming the restoration work is, and made us appreciate the vision and skill of Timur’s original artisans all the more. 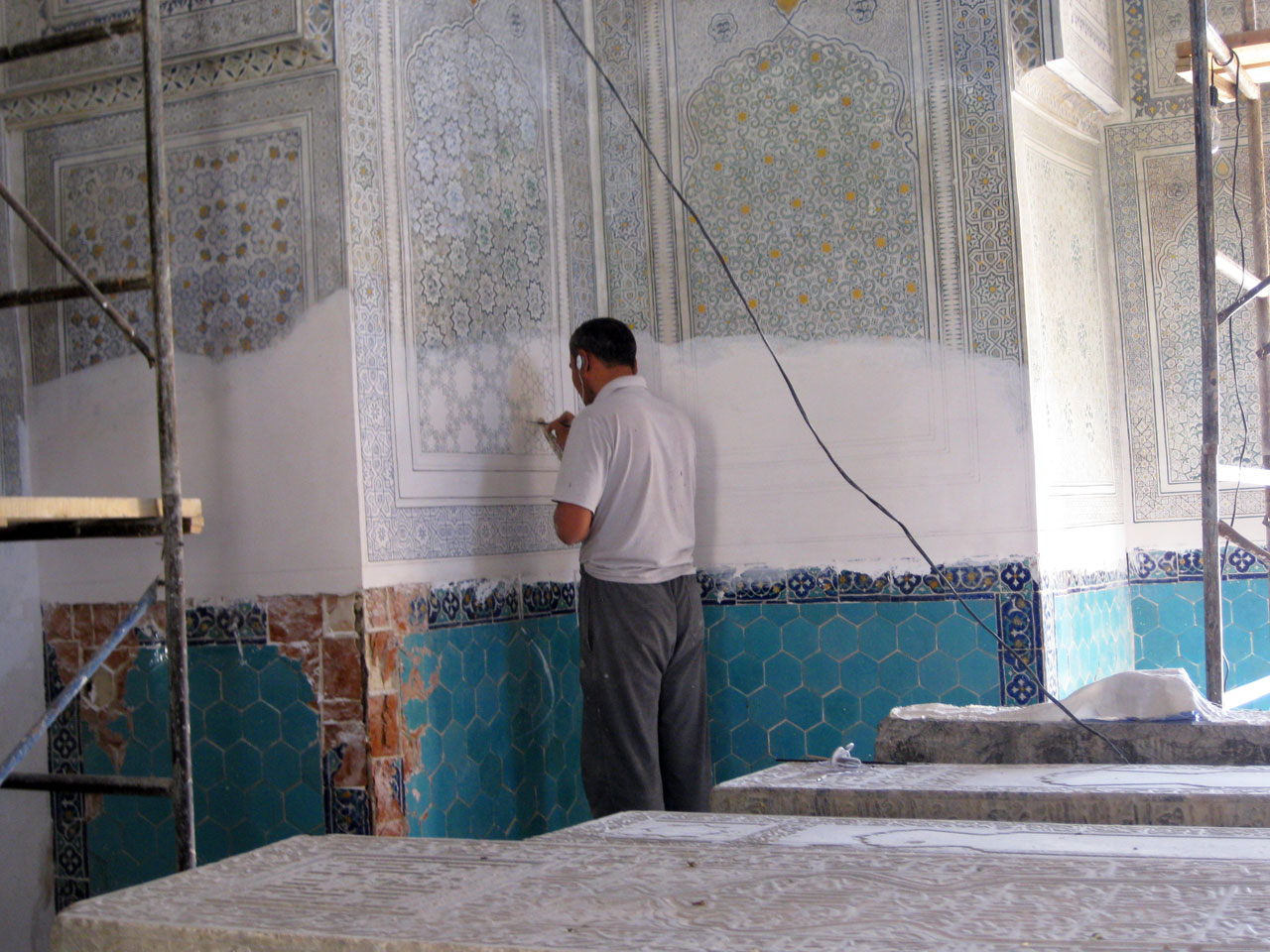 There is more to Samarkand than just the Timurid period, however. One afternoon we went for a walk around the Alisher Navoi Park, where we found the rather eccentric Regional Studies Museum, which houses exhibits ranging from bad taxidermy to a history of Samarkand’s Jewish population to a collection of random archaeological finds labelled simply, and brilliantly, as “dross”. Later that same afternoon came the most memorable encounter of our time in Samarkand, and perhaps of our whole trip to Uzbekistan, as we were wandering through the streets of the Old Town looking for the Jewish Quarter. 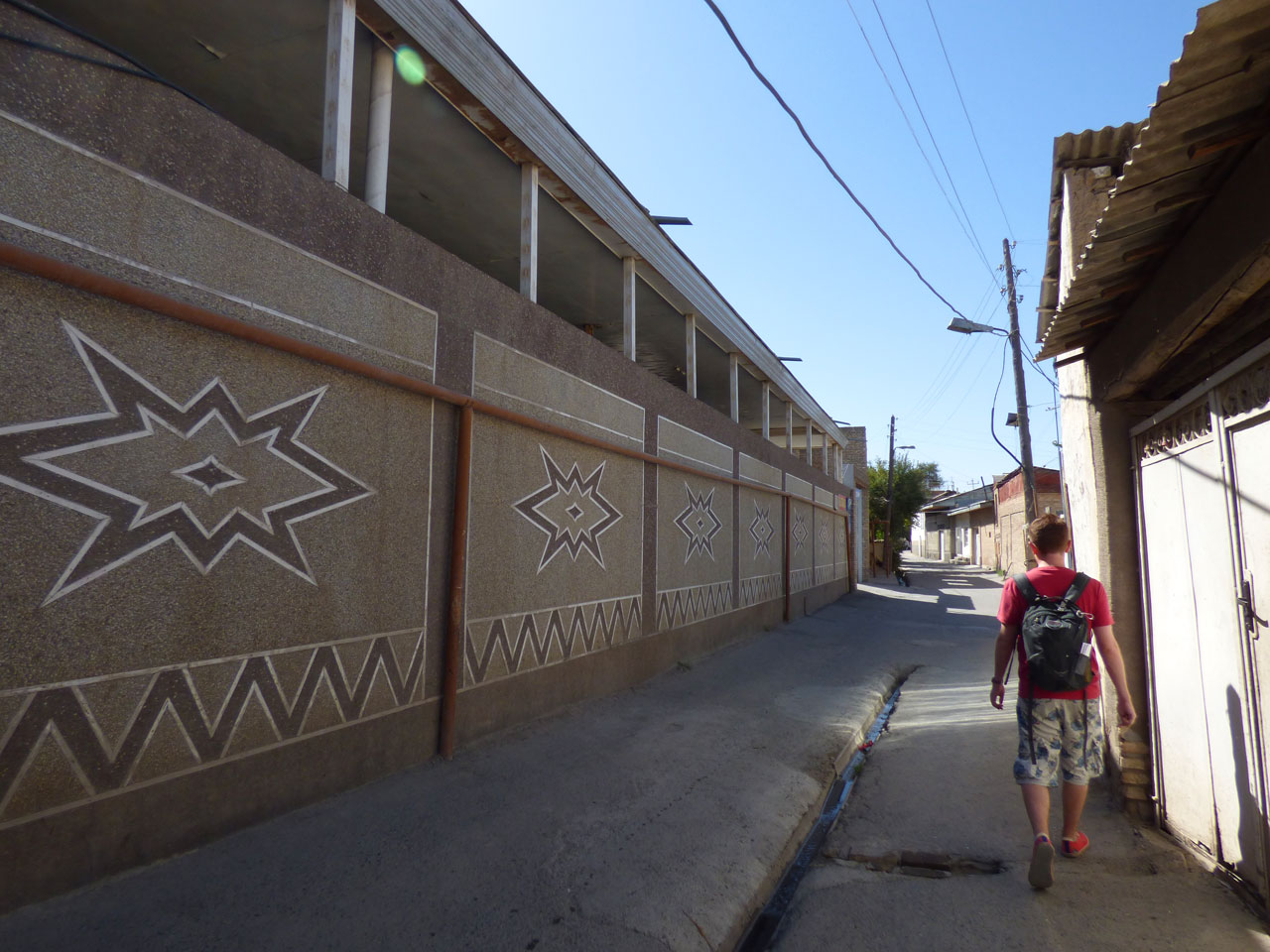 As we stood at a dusty street corner looking at a map and scratching our heads, two friendly local men looking flushed with the exuberance of a Sunday afternoon vodka session approached us, and tried to communicate with us in their limited English. As with many Uzbeks we met, this exchange was conducted through the medium of Premier League football, and they were keen to know which team I supported.

One of them brandished a bottle of vodka, and beckoned for us to follow them and join them for a drink. Against our better judgement, we agreed that we would “just have one”.

They led us round the corner to what seemed to be their house, or possibly some sort of social club, with a shop selling exotic birds attached. They sat us down on a *tapchan *inside a long room with a TV hung at one end and a portrait of President Karimov at the other, and out of nowhere about fifteen other men appeared. As is the case all over Uzbekistan, the myriad faces told the story of Central Asia’s history as a crossroads of civilisations; some with Mongol or Chinese features, others who looked more Persian or Turkish, and even one Korean. None of them really spoke English, but they all tried their best, while our two hosts poured beer into china cups, and then huge slugs of vodka into slightly smaller china cups. It was rapidly becoming clear that this was going to be more than “just one”, but even so we were still surprised when they whipped out a table cloth and a huge meal started appearing in front of us. Steaming bowls of beef and potato stew, enormous round loaves of Samarkand bread, freshly made salads and several different types of melon were all laid out, and we were implored to get stuck in. 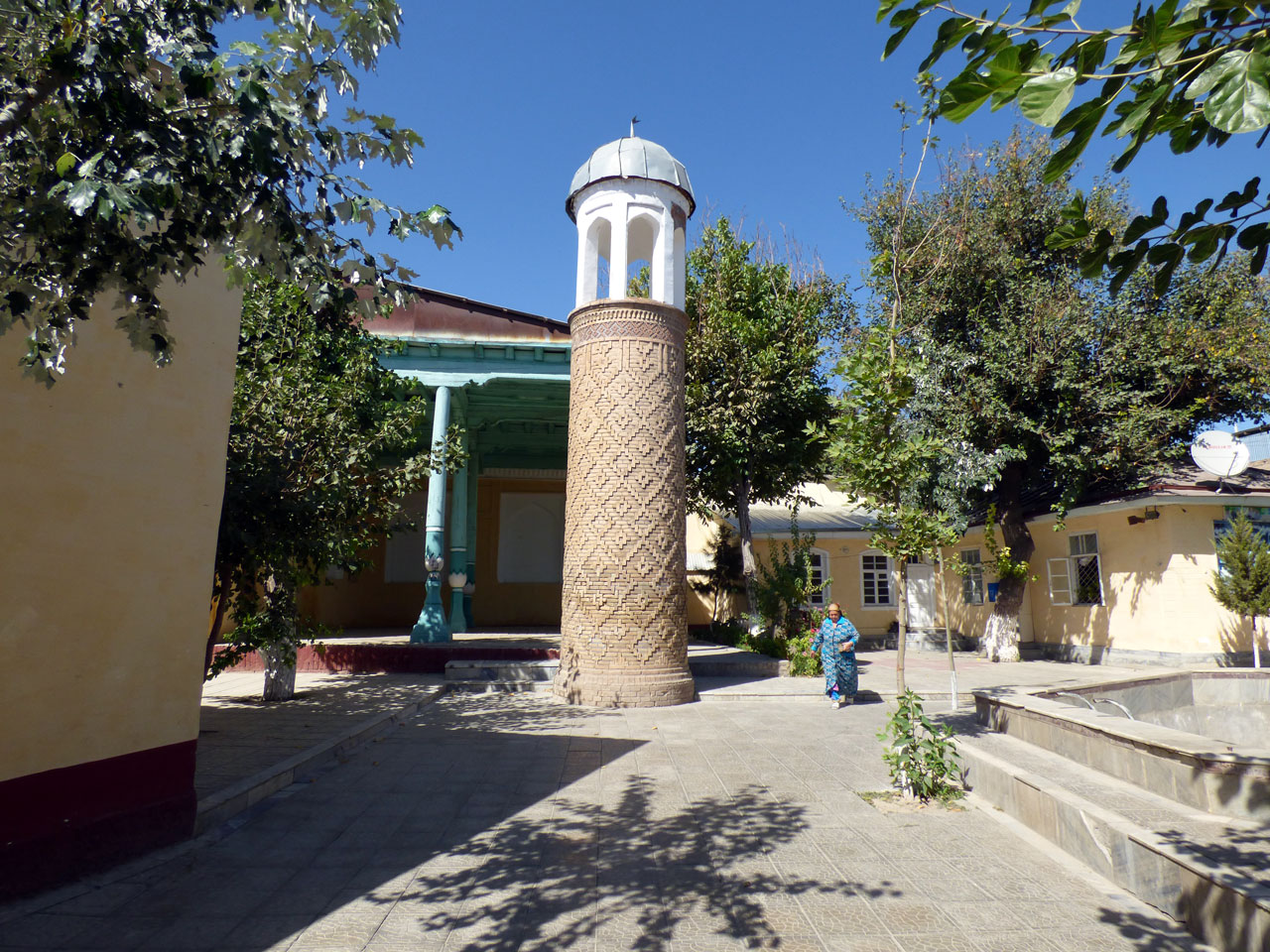 We had only recently had lunch so we weren’t particularly hungry, but we did our best to be polite and ate as much as we could while our hosts attempted to interrogate us. One older man knew a small selection of English words, which he seemed to delight in rearranging into every possible combination.

They told us what each person did for a living, though I’m not sure they were being entirely truthful; we were told that one man was the ‘chief’ of the Registan Square and another was a secret policeman, while one largely silent and disapproving-looking chap was introduced as the head of the mahallah (neighbourhood). In a stilted mishmash of English and Russian they spoke with passion about how we needed to understand that Uzbekistan was not like Syria, how the Americans had stirred up trouble in Iraq and Afghanistan, but perhaps most enthusiastically (and embarassingly for us), how appalling it was that we didn’t have children. One guy in particular wouldn’t leave the subject alone.

He gave me a seriously disapproving look, then flapped his arm up and down in a gesture clearly intended to signify erectile dysfunction. We had already been warned by some British friends in Tashkent that most Uzbeks don’t understand the concept of a couple our age not having any children; in Uzbekistan people normally get married young, and if the wife isn’t pregnant within six months of marriage then it’s assumed that there is something medically wrong with her. I didn’t dare tell him that we weren’t even married.

After an hour or so of eating, drinking and fielding awkward questions we stumbled back out into the afternoon sunlight, posing for photos with our new friends in front of their bird cage before wandering off in a daze back towards the Registan. 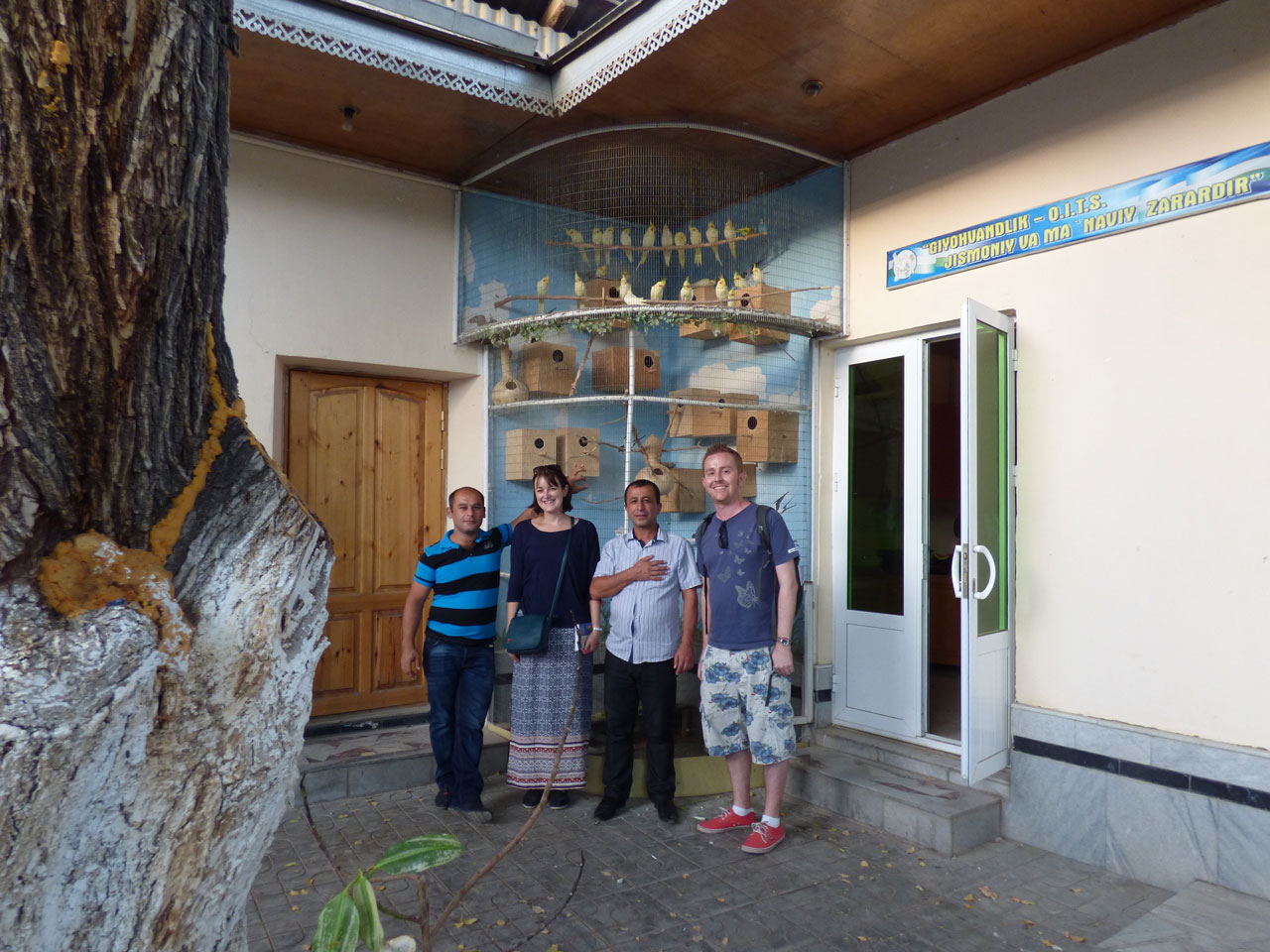 It had taken us a few days, but by the time we left Samarkand the city had really grown on us. Looking back at my photos now, I wonder if we were suffering a little from mosque fatigue when we reached Samarkand, and had maybe started to take Uzbekistan’s incredible architecture for granted after a week spent in Khiva and Bukhara. I do think that Lonely Planet, Colin Thubron and all the other critics of Samarkand’s restoration have a point, and the city can feel a little sanitised and sterile in places. But there is definitely still plenty of life in Samarkand; it’s just not always in the places where you expect to find it.