The sun-baked city of Khiva sits between two bleak and inhospitable deserts, the Kyzylkum and the Karakum. As you approach the city limits the rusty brown sand begins to sprout unlikely patches of green, and you find yourself wondering whether it’s an oasis or a mirage that you’ve stumbled upon. The steep, crenellated walls of the old town, the Ichon Qala, enclose an impeccably restored medieval city that feels like walking into another age. The streets are flanked by mosques, mausoleums and madrassas sculpted in the dusty ochre tones of the surrounding desert, crowned by glistening flourishes of turquoise tiling. Old ladies in technicolour headscarfs amble along the alleyways, souvenir stalls are stacked high with shaggy woolen Turkmen hats, and bulging minarets soar towards the blazing blue sky. 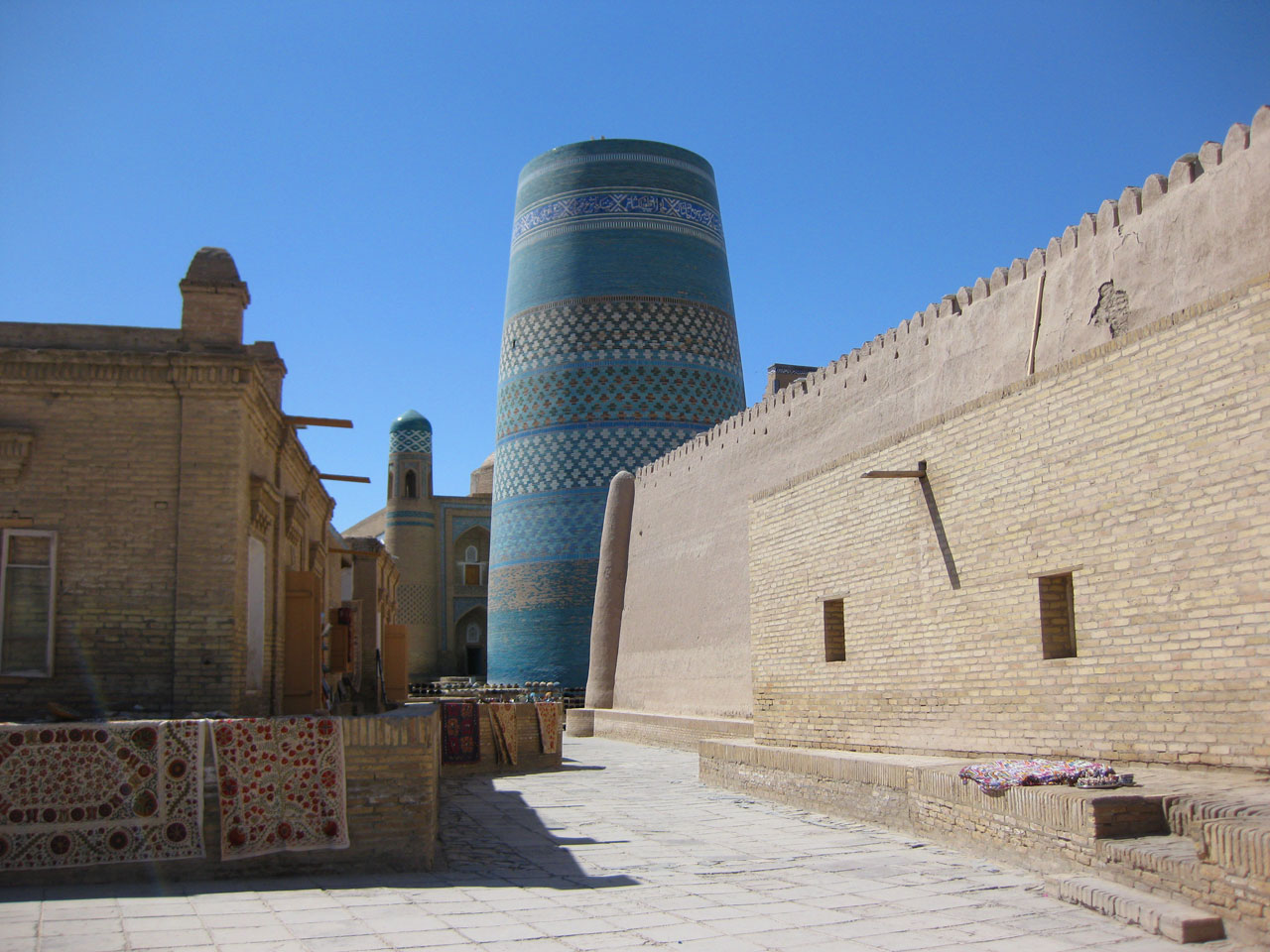 Khiva belongs to a historic region known as Khorezm, one of those half forgotten countries that has all but disappeared from the modern map; in the 13th century the Khorezmians built an empire that included the territory of modern day Turkmenistan, Uzbekistan and Iran, as well as a sizeable chunk of western Afghanistan. For those who are ignorant of Central Asian history, as I was before I started researching this trip, Khorezm’s historical significance comes as a surprise. A statue outside Khiva’s West Gate commemorates Abdullah Muhammed Ibn Muso Al-Khorezmi, a gifted Khorezmian mathematician who gave his name to the mathematical process we now know as the algorithm, and from whose work Al-Jebr we get the word ‘algebra’. We spent a few confused minutes looking round a museum that we thought was his old house, before we realised that it was actually the tomb of a different Al-Khorezmi, a musician whose significance was unclear in spite of the many photos of him posing with his instruments. 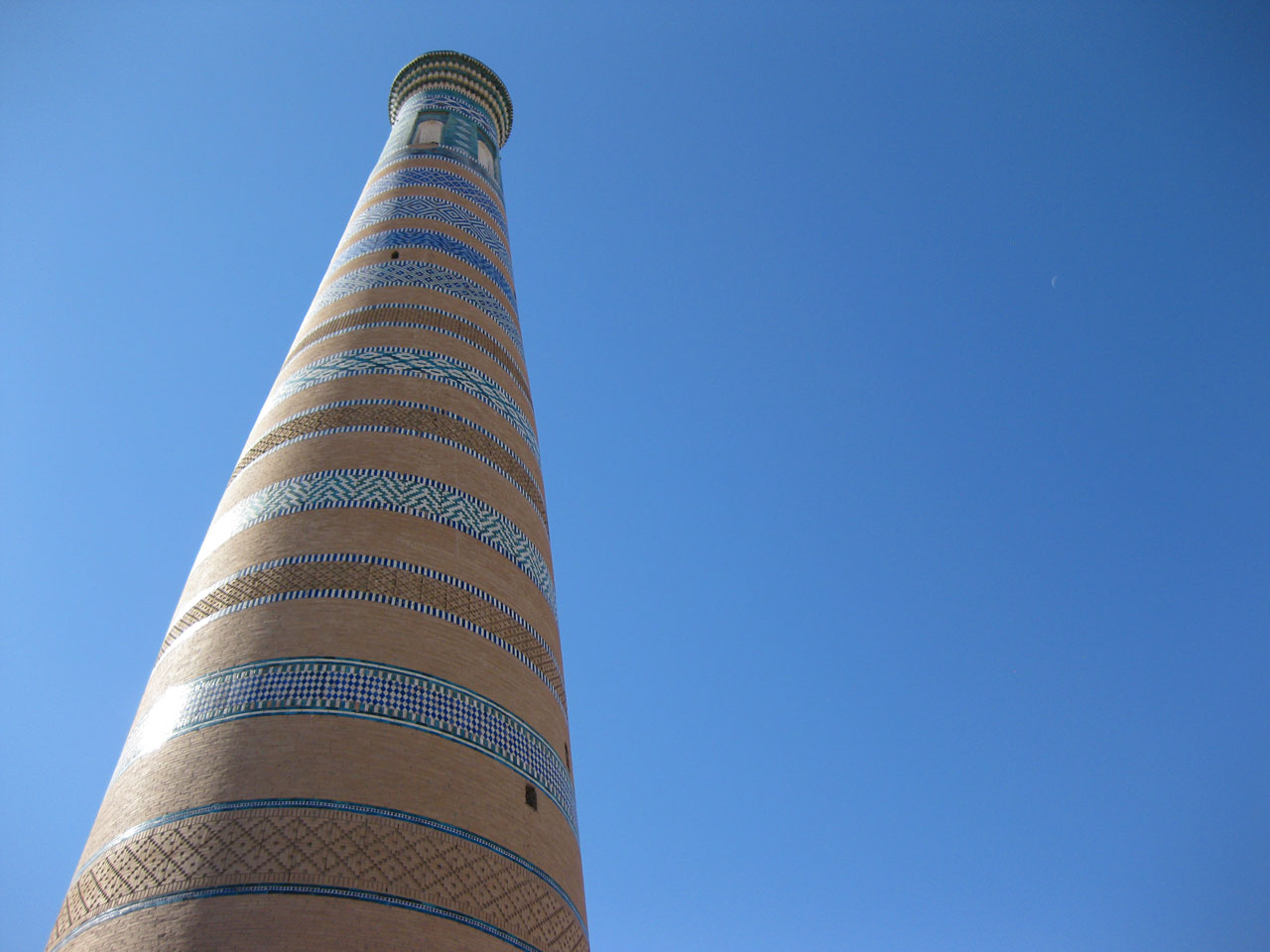 These days Khiva is a very welcoming place, but in the 19th century the name struck fear into the hearts of many who travelled the deserts of Central Asia. The city was the centre of a feared khanate, ruled by the descendants of Genghis Khan, and was a notorious slave trading outpost, where Turkmen raiders would bring the unfortunate souls they had captured in the lawless deserts to the north and west. Many of those on sale at the slave markets were Russians snatched from the southern fringes of the Caspian steppe, and this was eventually used by the Russians as a pretext for annexing Khiva in 1873. The taming of Khiva came at the height of the ‘Great Game’, a prolonged period of imperial manoeuvring in which Russia and Britain jostled for influence in Central Asia, with Russia’s southern frontier creeping ever closer towards the vulnerable mountain passes of northern India. 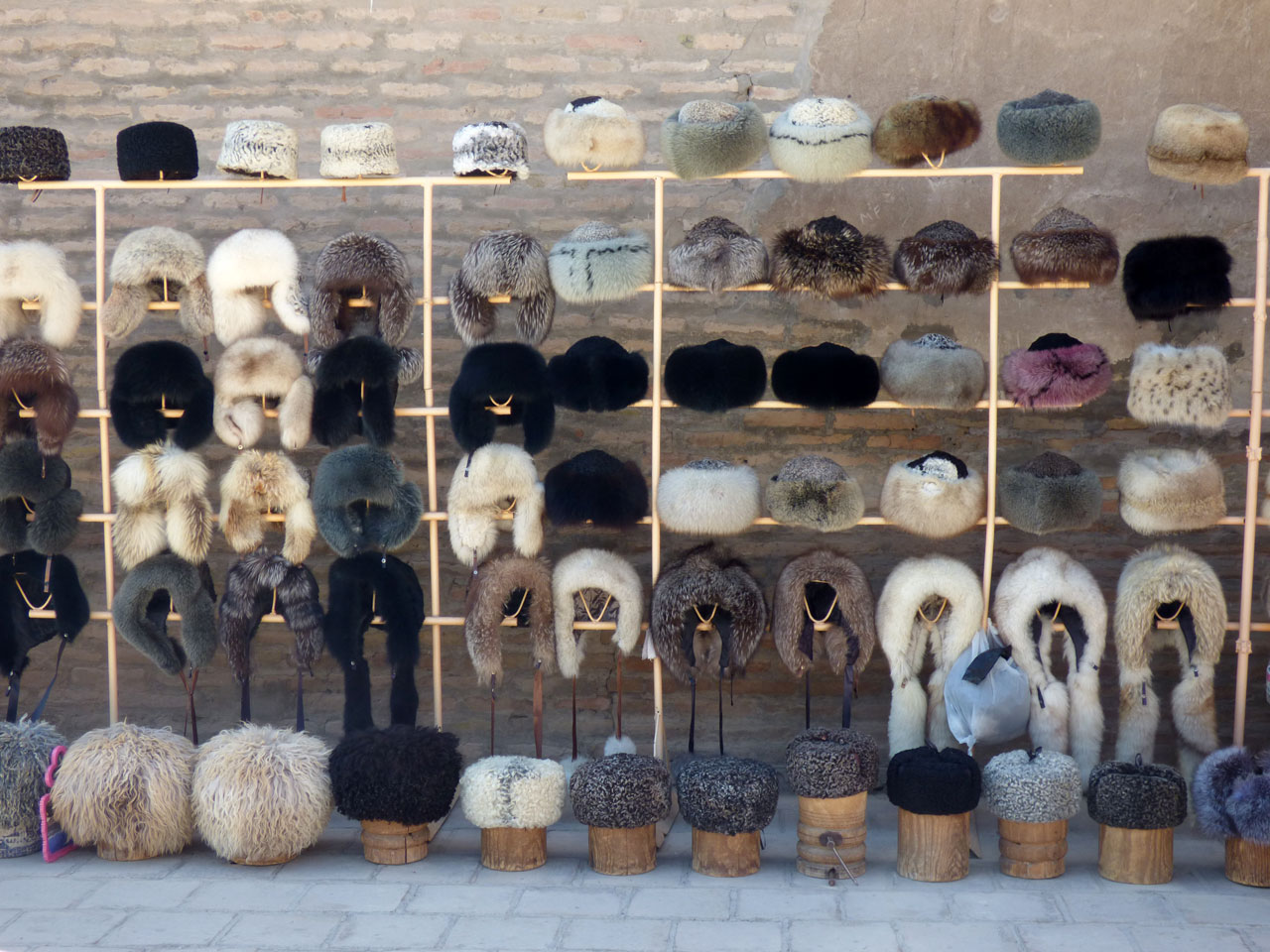 We were able to do what very few of our fellow Brits managed during the 19th century, entering the court of the khan. The extravagant Tosh-hovli Palace, built in the 1840s, is where the ruler would enjoy the company of his four official wives, along with the many young girls that made up the royal harem. Within the palace courtyards you can still see the circular podium on which the khan’s yurt was pitched during the winter months, a nod to his nomadic roots. Our visit happened to coincide with a film shoot, which seemed to be a pretty low budget production of some Uzbek historical epic. Horsemen clothed in black galloped around clutching flimsy plastic swords, while a group of extras hung around waiting for their scene. These extras were local people clad in a variety of traditional costumes, many of which are still worn today, making it difficult to tell where the film set ended and real life began. 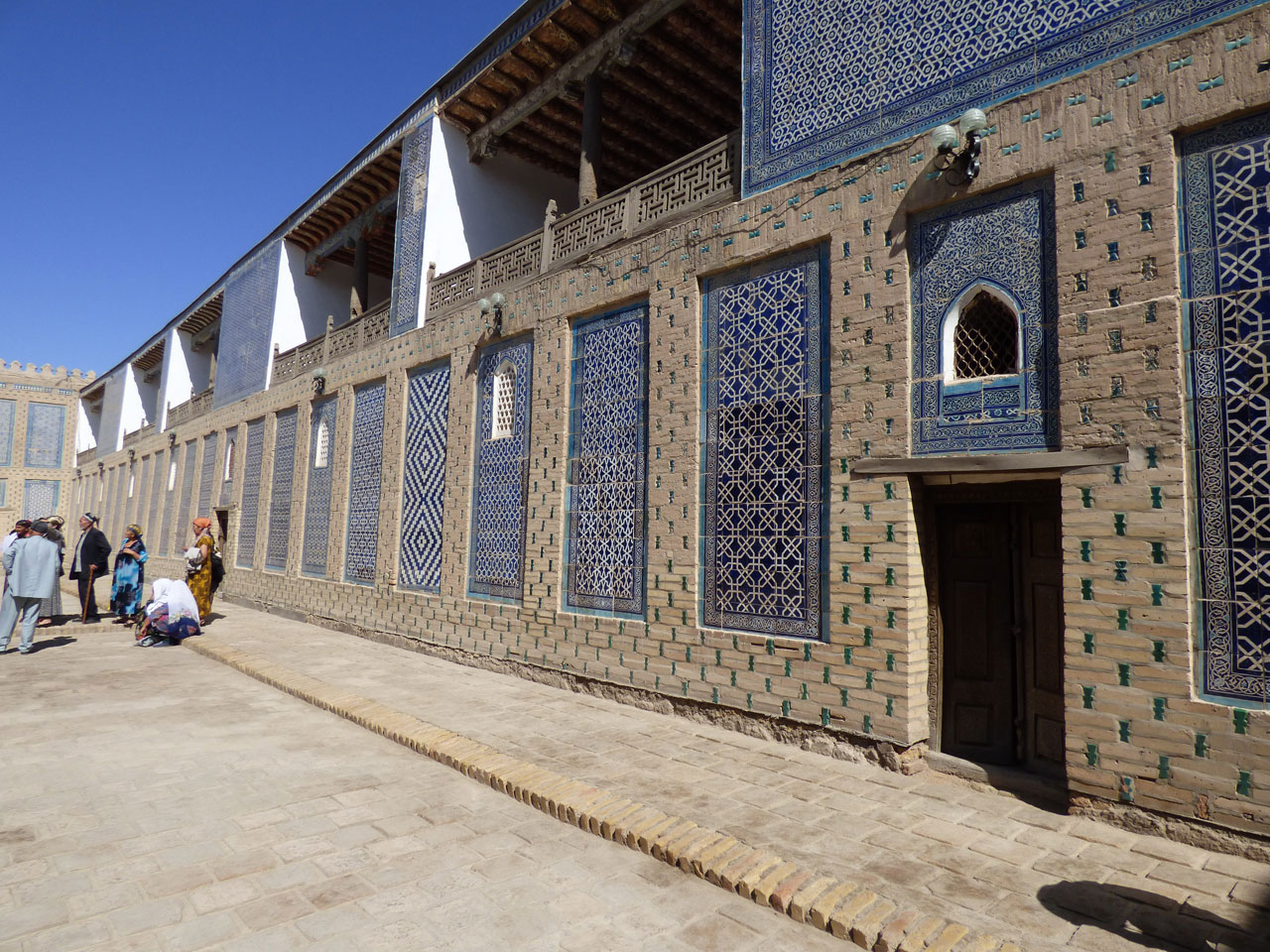 Thankfully a lot has changed since the days of the khan; back then Khiva was subject to sharia law, and as we wandered towards the Kuhna Ark fortress we crossed the square where infidels were beheaded and adulterers were stoned. Harsh punishments were also handed out to debtors, who were nailed by their ear to the city gates; the city’s residents were then encouraged to spit on them as they walked past. The square outside the Kuhna Ark was also the place where many of the town’s women came to burn their veils in the 1920s, after Khorezm was incorporated into the godless and egalitarian Soviet Union. This story had an unhappy ending for many women, who were murdered by their husbands or male relatives after returning home with their faces uncovered. Ultimately, however, it was the Soviet approach that won out; although the majority of Uzbeks are still nominally Muslim, it’s an extremely liberal interpretation of Islam that holds sway these days. Most Uzbeks drink alcohol and eat pork, even during Ramadan, and women are not required to cover up. 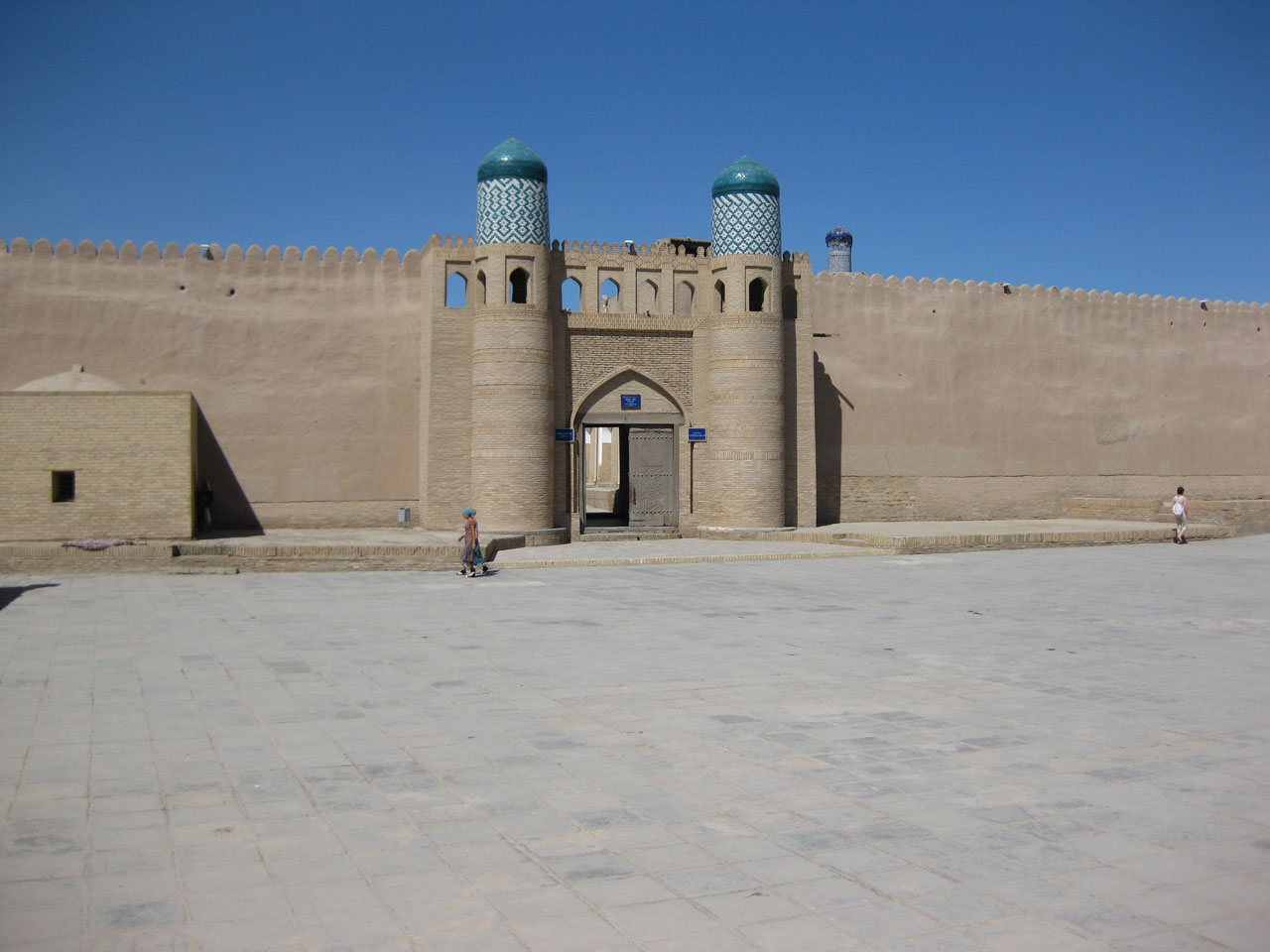 The most obvious way in which traditional Uzbek culture is expressed is through the various crafts that fill the shelves of souvenir shops, and Khiva is home to some particularly skilled artisans. We visited a wood carving workshop where we saw ingenious and intricate book stands, originally designed to hold the Koran, along with sturdy hand carved doors. We also stopped off at the Khiva Silk Carpet Workshop, which I had read about a few months earlier in Christopher Aslan Alexander’s excellent book A Carpet Ride to Khiva. It was a little surreal to find myself standing in a place about which I had read so much, and to see people who I recognised from the photos in the book. The workshop was originally set up with funding from Operation Mercy and the British Council, and produces carpets and suzanis using traditional Uzbek designs and natural dyes. It perhaps won’t shock you to learn that an awful lot of the carpets on sale in Uzbekistan – around 70% according to our guide – are mass produced in China. 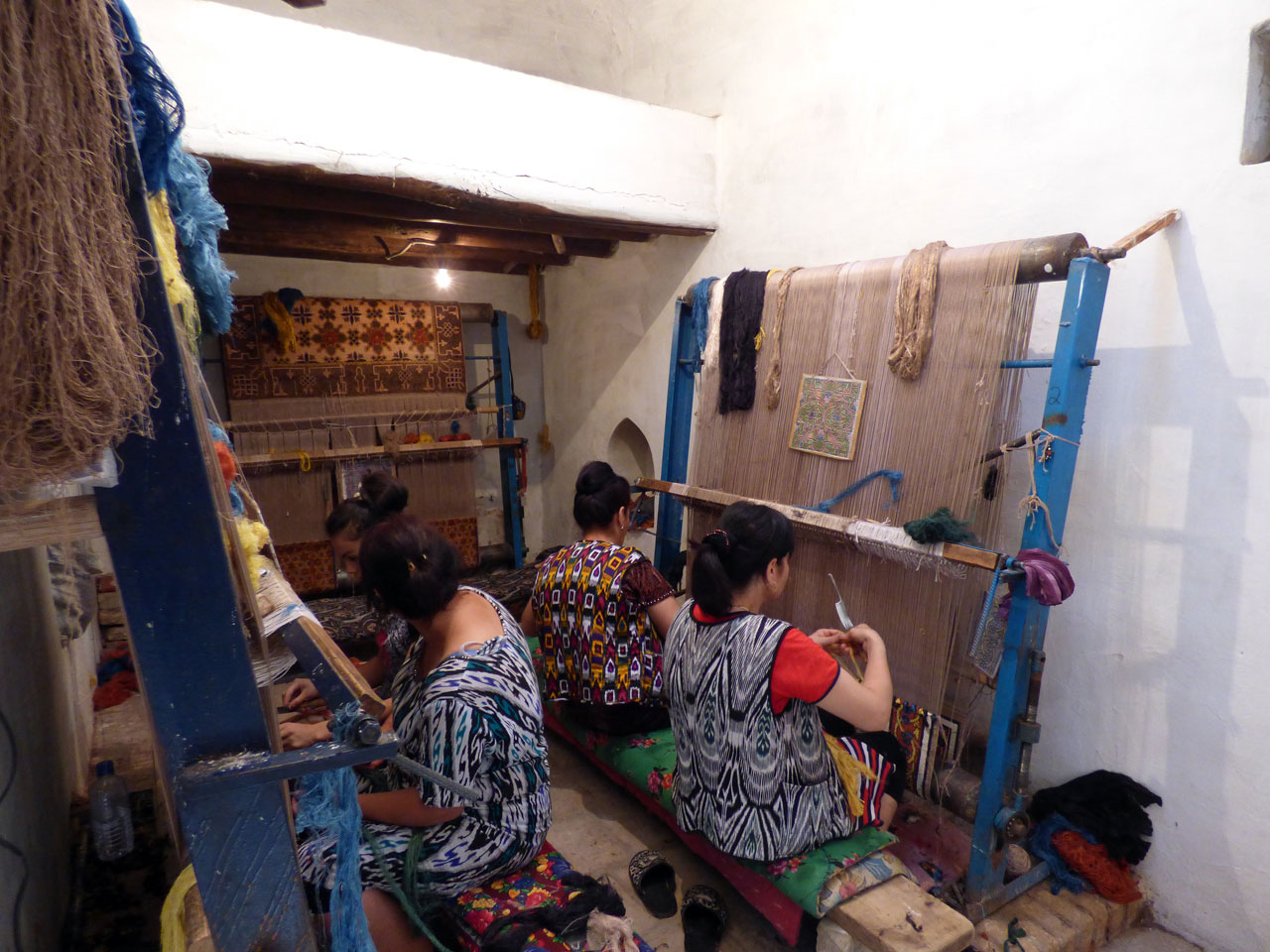 For me, the most impressive craft on display in Khiva was the architecture, but not everyone would agree. There are those who argue that the extensive restoration of the Ichon Qala, started by the Russians in the 1960s, has gone too far, and that the town is now nothing more than a sanitised open air museum. While I can see their point, I’m not sure that this fetishisation of ‘authenticity’ is always helpful. Sometimes I think you have to take a step back and just appreciate a place like Khiva for what it is, rather than what you think it should be. And there is no denying that Khiva as it exists now is an incredibly beautiful place. 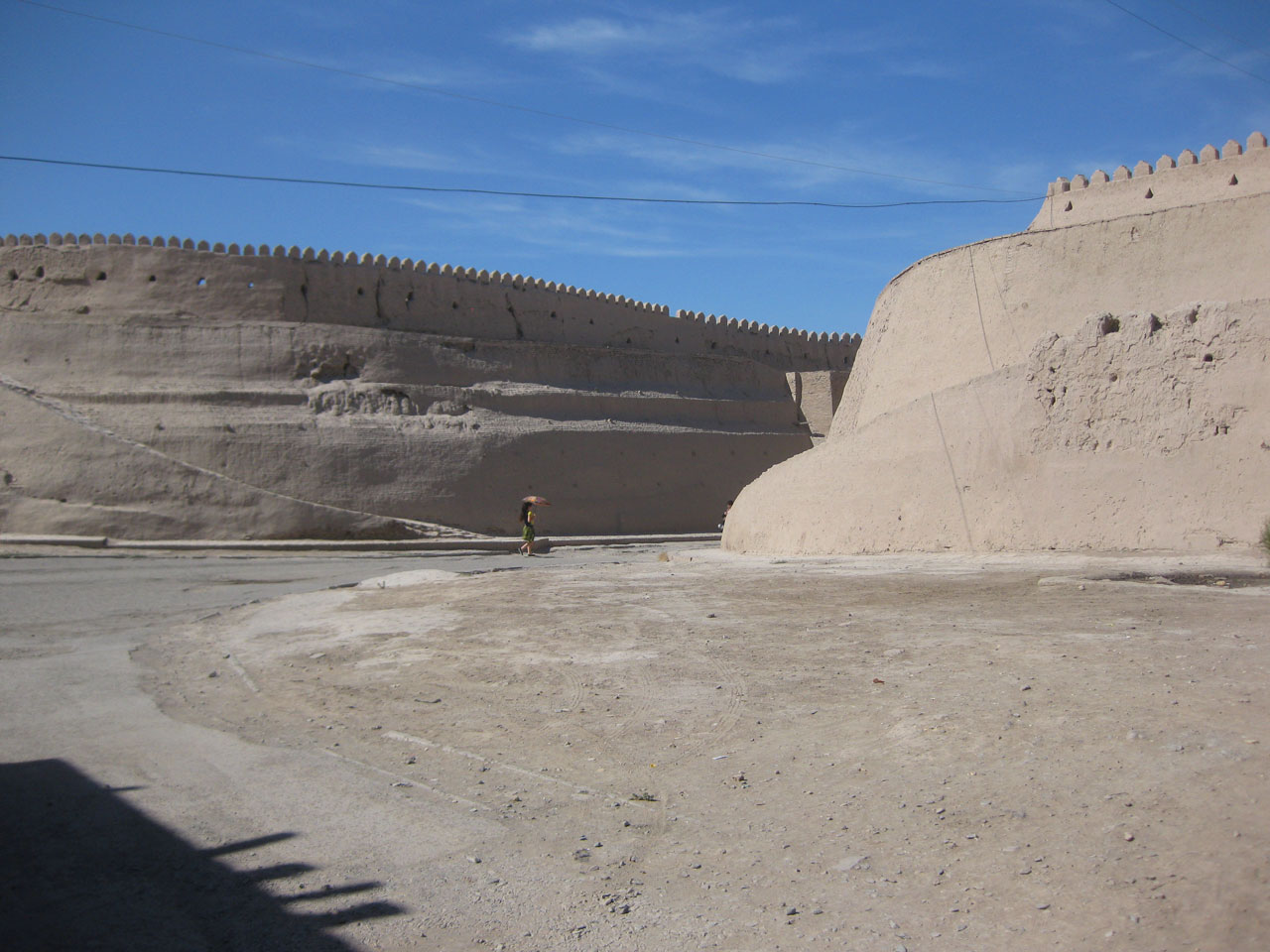 There are also still plenty of people living within the walls of the Ichon Qala, even if the streets around the main tourist sights can seem oddly deserted. We took a walk through the more residential parts of the old town and saw quiet streets lined by mudbrick houses, where people sleep outside on their tapchan (a sort of wooden bed) under a mosquito net during the height of summer, when temperatures can reach a barely imaginable 55°C. We passed children meandering down back streets on bikes, women returning home from the bazaar laden with circular loaves of bread, and wizened old greybeards in embroidered skullcaps taking an afternoon stroll, hands clasped behind their backs. 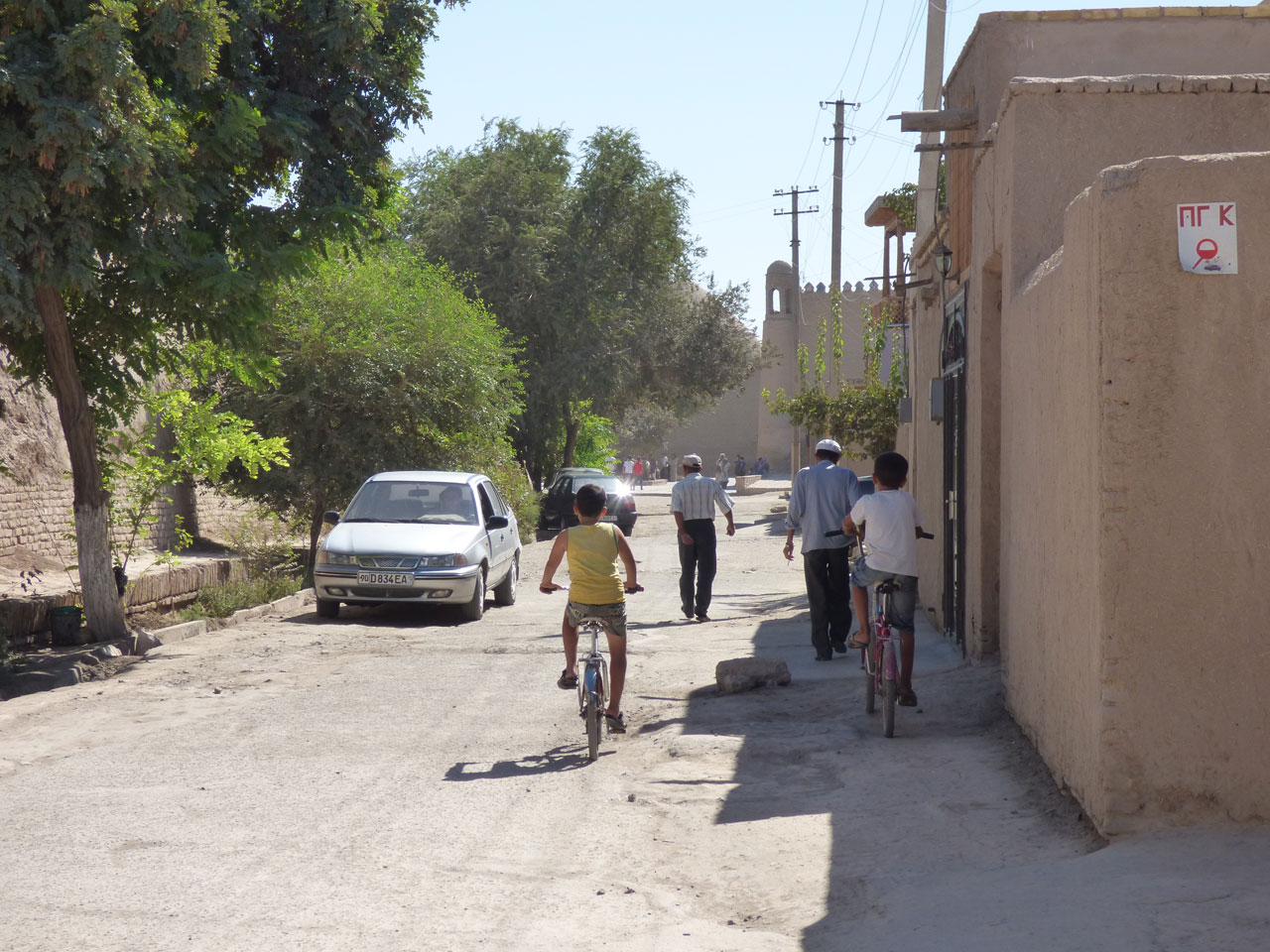 On our second and final night in Khiva we took in the sunset from the watchtower at the top of the Kuhna Ark, the best vantage point in the city. As the sun slipped down towards the deserts of Turkmenistan to our west, the minarets and madrassas of the Ichon Qala were bathed in a dusky orange light, the only sound the appreciative murmur of our fellow tourists and the sporadic braying of a goat chained up somewhere below. Standing here, surrounded by such a spectacular view, it was hard to imagine why anyone would have wanted to leave this city in ruins. 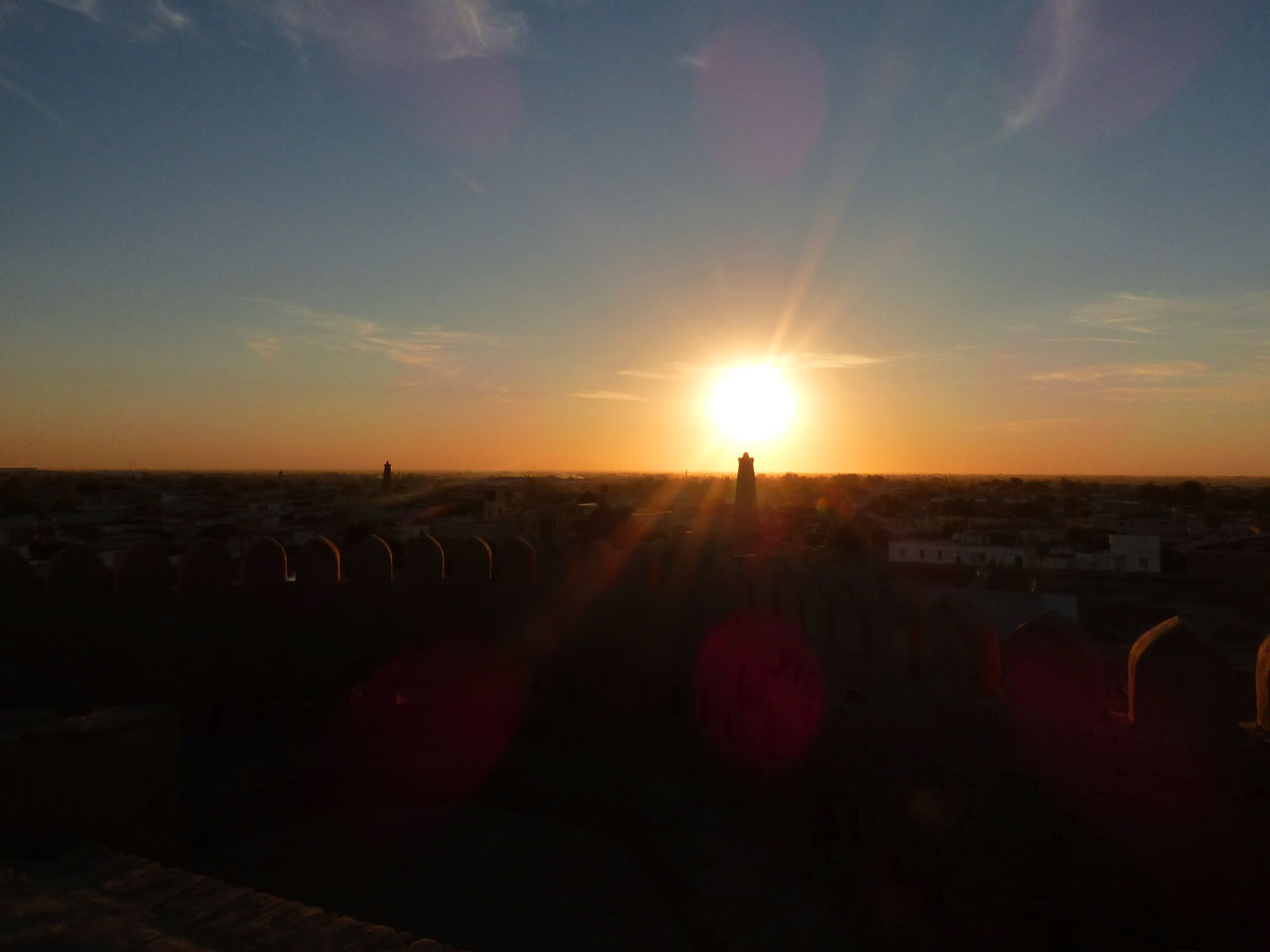 I’m not usually superstitious, but I’m pretty sure that the ghost of a tenth century Persian emir cured me of diarrhoea. My stomach had been suffering for a couple of days,

“What’s up bitches, who’s ready to cook some meth?” It would have been a jarring welcome had it come from Jesse Pinkman himself; as it was, delivered in the plummy voice

Not Here
—
Khiva: In the court of the khan
Share this