I’m not usually superstitious, but I’m pretty sure that the ghost of a tenth century Persian emir cured me of diarrhoea. My stomach had been suffering for a couple of days, the most likely culprit the plov I’d eaten for dinner on our last night in Khiva. Plov is Uzbekistan’s national dish, a combination of rice, mutton and vegetables, and like most Uzbek cuisine it’s very heavy, soaked in oil. So when our guide in Bukhara told us that walking around Ismail Samani’s mausoleum three times would make any wish come true, I figured it was worth a shot. While I can’t say for sure whether I was touched by a ghost or a divine being, from that moment onwards my holiday improved immeasurably, in ways that you probably don’t want to hear about. 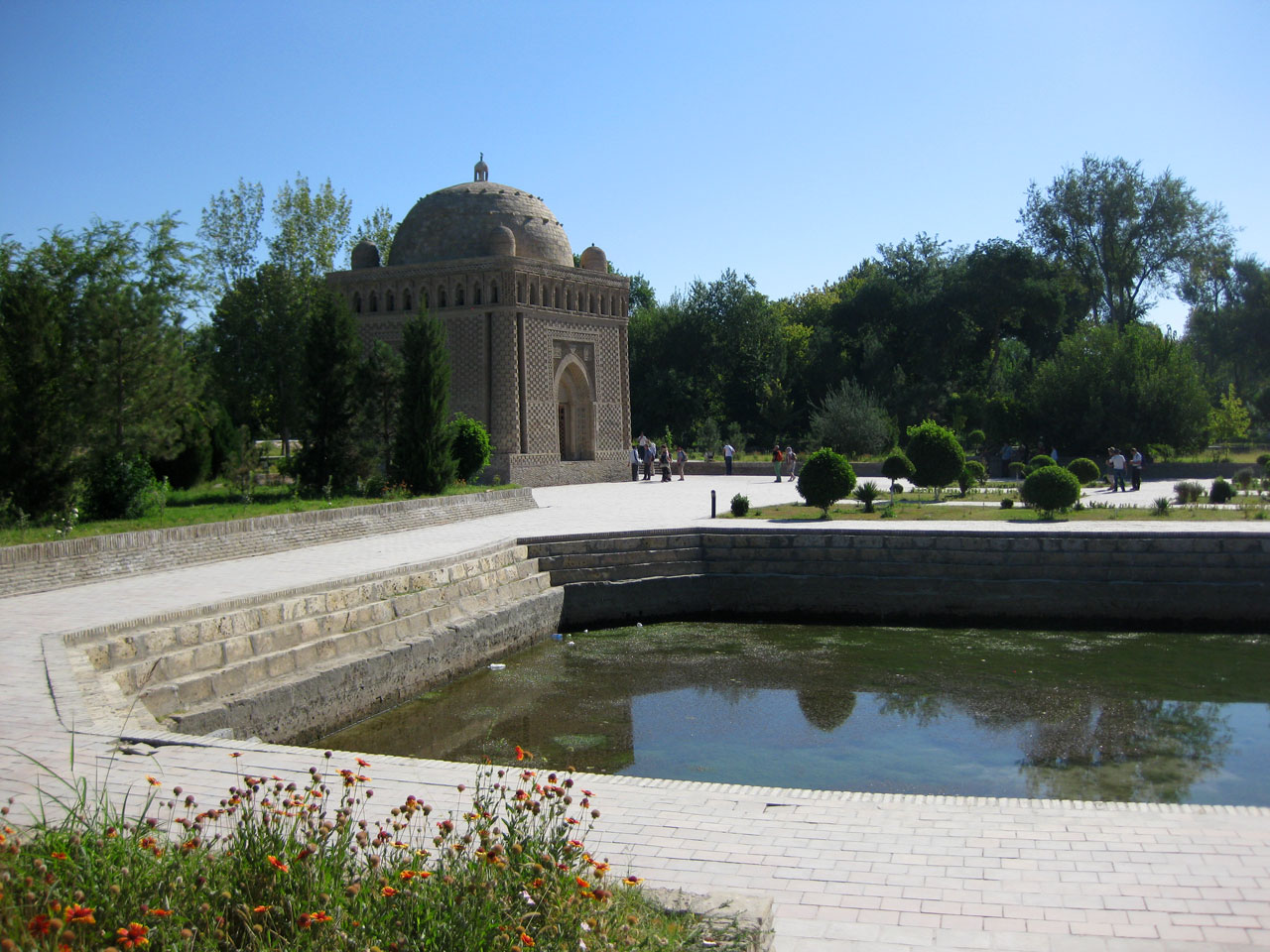 Bukhara has long been venerated as one of Central Asia’s holiest places, and in its heyday was one of the most important cities in the Islamic world, yet most people in the West have never heard of it. Bukhara’s glories are not all faded either; whereas Khiva has the slightly Disneyfied appearance of an open-air museum, and Samarkand’s ostentatious monuments are marooned amongst more modern surroundings, Bukhara still feels alive and authentic, a slice of old Turkestan. The medieval centre has survived both the invading Russians, who subjugated the city in 1868, and the current Uzbek regime, which has an alarming penchant for tearing down old buildings that don’t fit with the shiny marble and gold aesthetic so beloved of Central Asian despots. 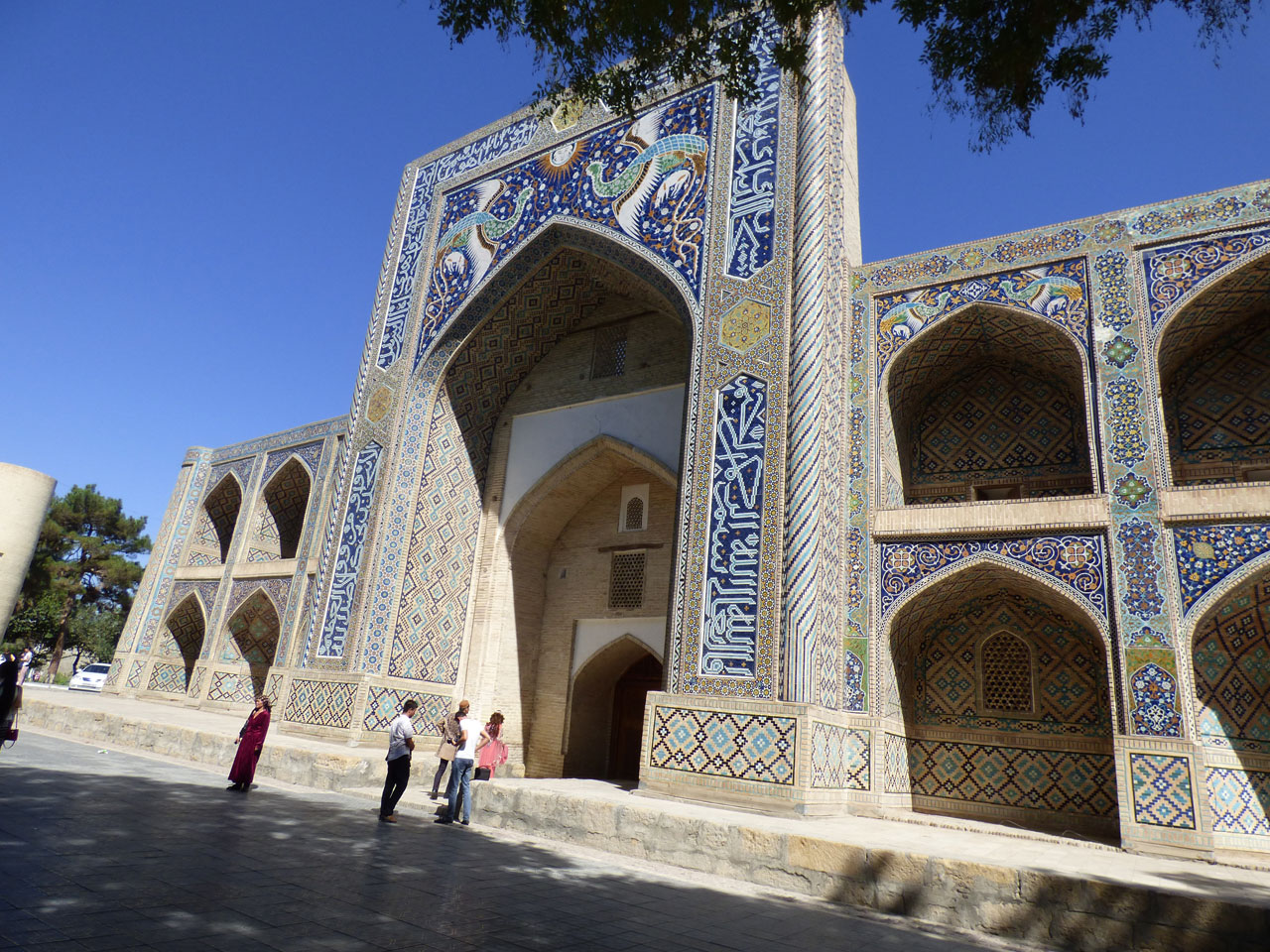 A casual observer leafing through a guidebook or a brochure would be forgiven for thinking Uzbekistan’s three most famous Silk Road cities constitute a fairly homogenous collection of turquoise-domed monuments, but in fact each has its own unique architectural style. Khiva is characterised by mud-brick walls and bulging minarets, while Samarkand is an explosion of tilework and distinctive fluted domes. Several of Bukhara’s most impressive monuments eschew colours altogether, and are embellished purely by the ingenious use of intricate brick work. Ismail Samani’s mausoleum is one excellent example of this, and the towering Kalon minaret is another. 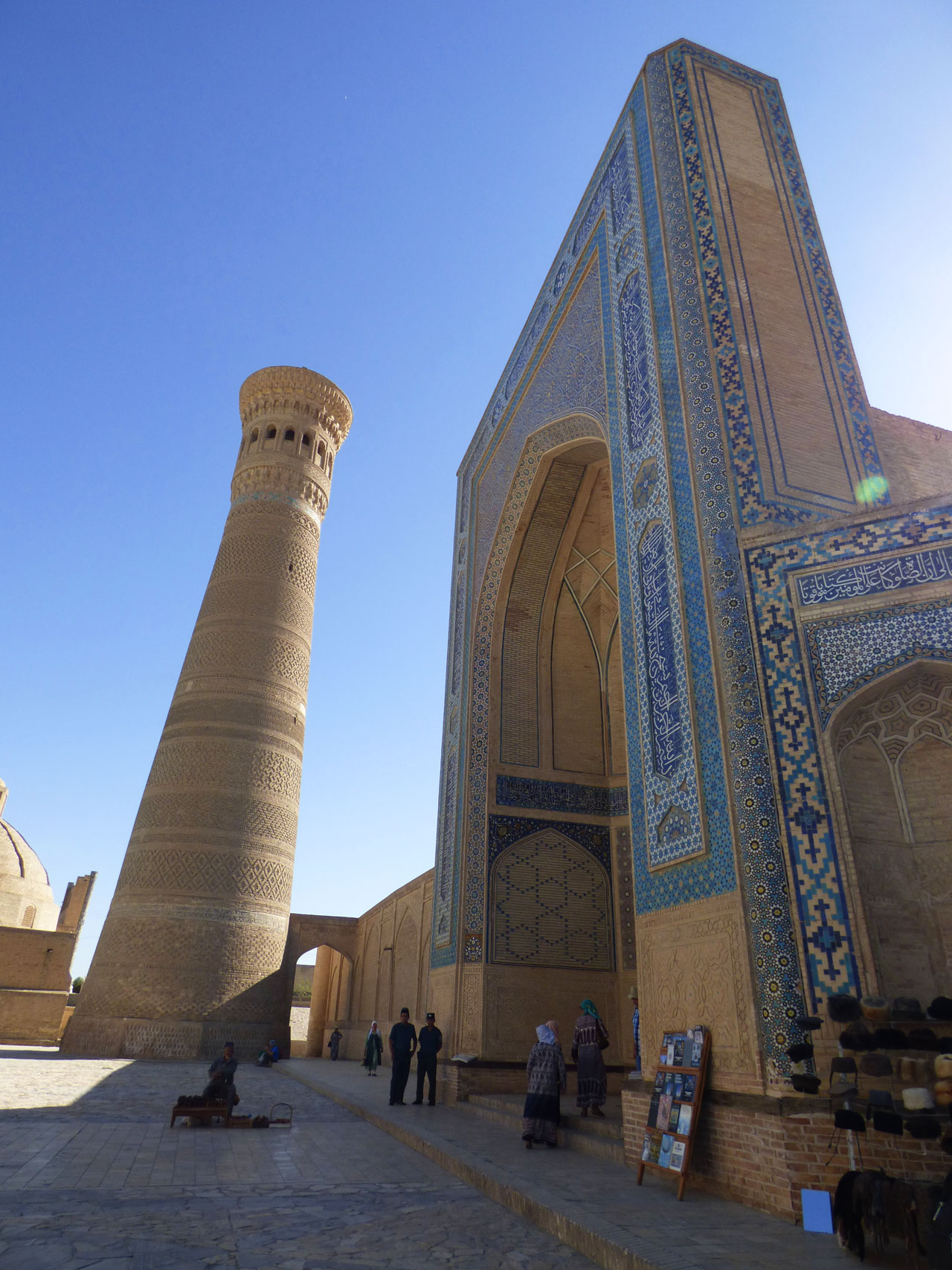 This minaret is flanked by the Mir-i-Arab madrassa and the Kalon mosque, which together form the most impressive architectural ensemble in Bukhara. I’d even go as far as to say that it gives Samarkand’s Registan Square a run for its money; while I was fully expecting to be blown away by the Registan, the Kalon complex almost took me by surprise, and it seems to fit in with its surroundings in a way that the Registan no longer does. In fact there seems to be another extraordinary building round every corner in Bukhara, from the four-towered Char Minar, hidden down an unprepossessing back street, to the Maghoki Attor mosque, where it is said that both Muslims and Jews were allowed to pray until the sixteenth century. 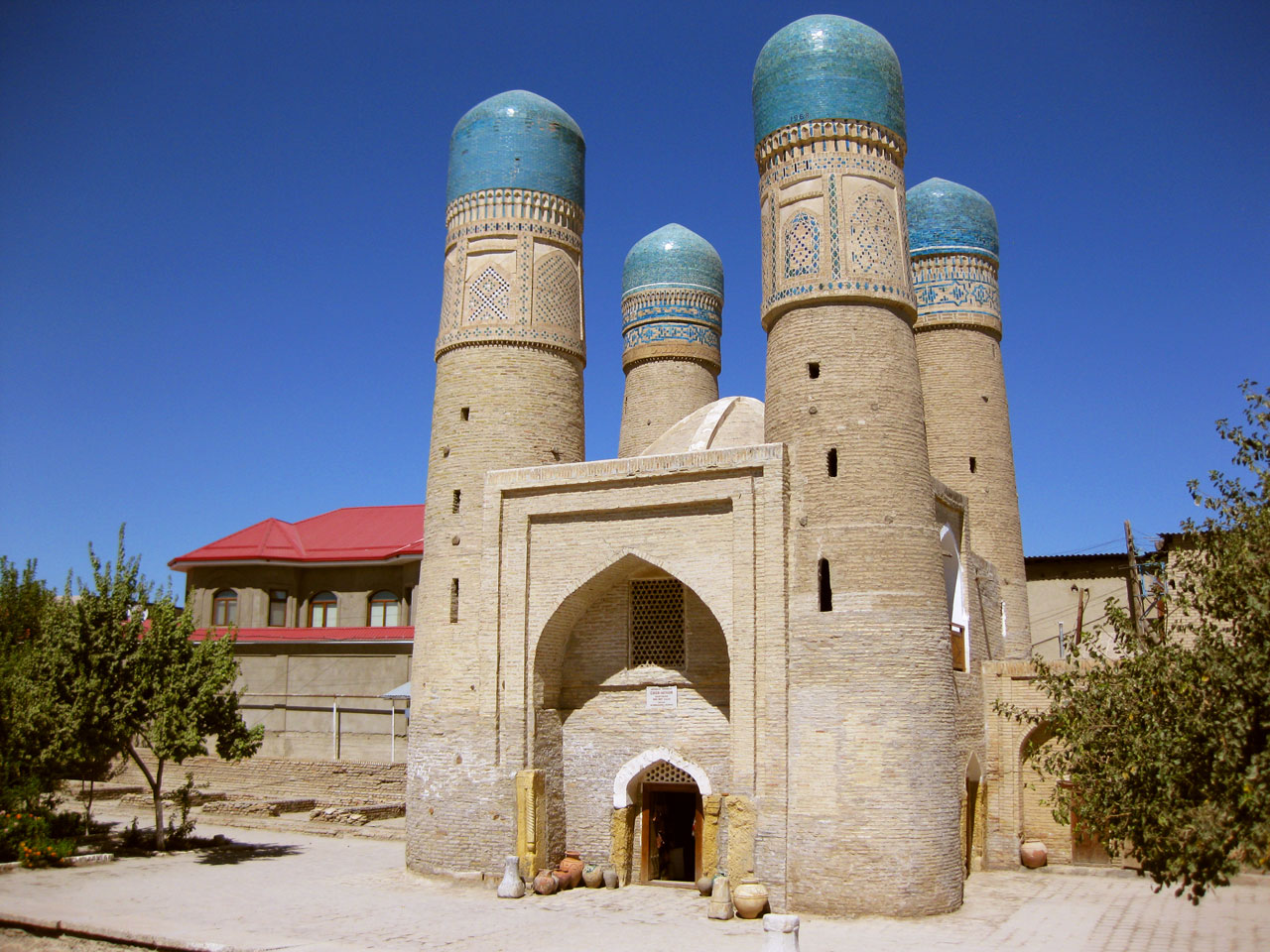 This example of religious tolerance and coexistence in the heart of Islamic Central Asia seems pretty remarkable when you consider the state of the world today, several hundred years later. It’s equally surprising to discover that there is still a Jewish community in Bukhara, albeit a very small one that continues to dwindle, consisting of perhaps a few hundred people. The old Jewish quarter is just a short walk from the Lyabi-Hauz pool in the centre of town, and it’s still home to a working synagogue. 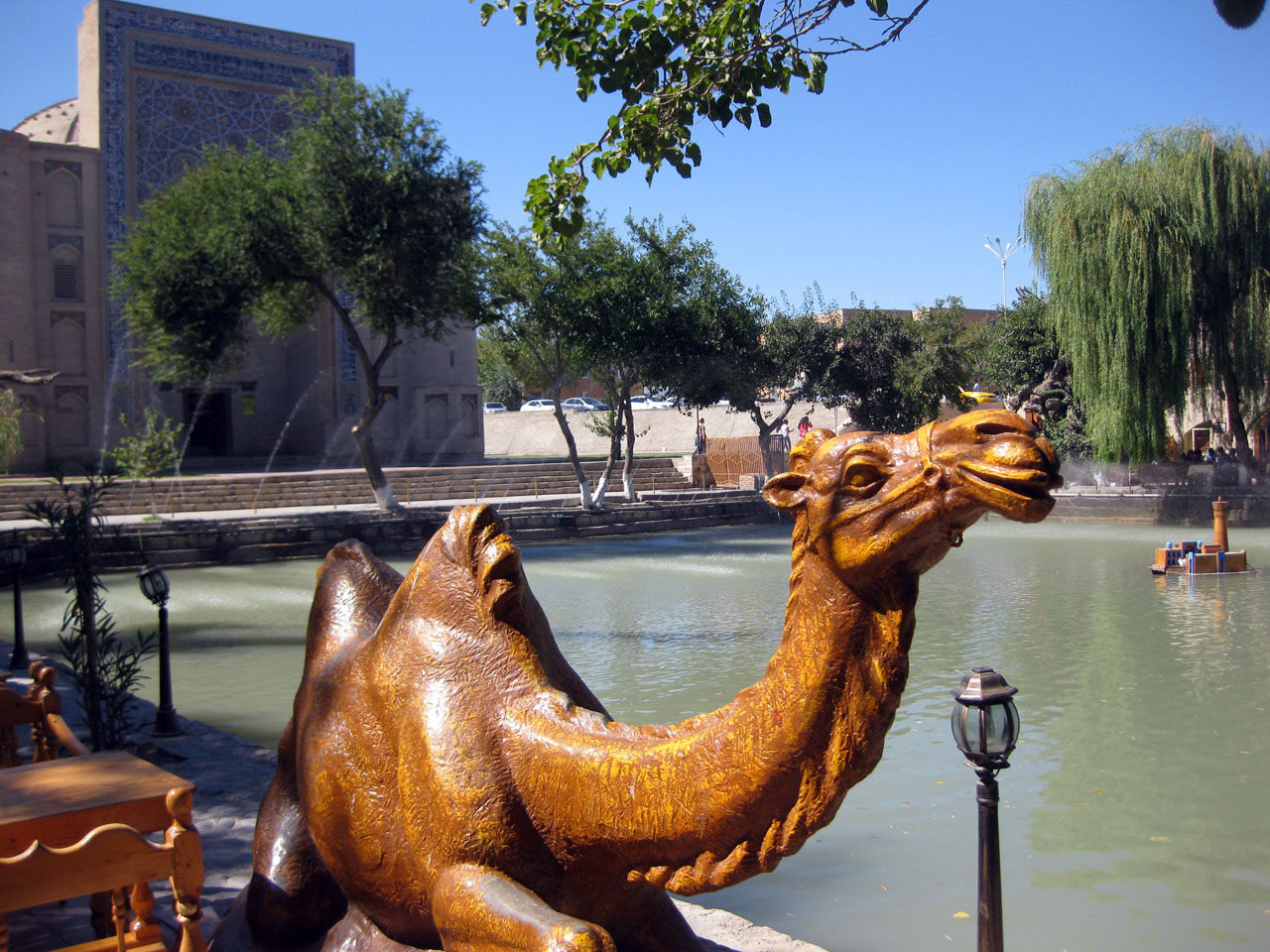 In the nineteenth century, however, Bukhara was a less tolerant place, the centre of a powerful emirate ruled by a succession of unsavoury despots. Bukhara’s most notorious Emir was Nasrullah Khan, who butchered most of his family in his ascent to the throne. We traipsed up to the Emir’s jail, the Zindan, where he famously imprisoned two British officers, Charles Stoddart and Arthur Conolly. Stoddart arrived in Bukhara in 1838 as the emissary of the British government in India, and made an almighty faux pas, arriving at the Ark fortress on horseback, rather than on foot as custom dictated. To make matters worse, he brought no gifts and no letter from Queen Victoria. Nasrullah, a vain and egocentric character by all accounts, was so affronted that he had Stoddart thrown into the ‘bug pit’, a six metre deep hole filled with snakes, scorpions and various other creepy-crawlies. When Conolly turned up three years later to try and negotiate his release, Nasrullah, suspicious of his motives, had him locked up as well. 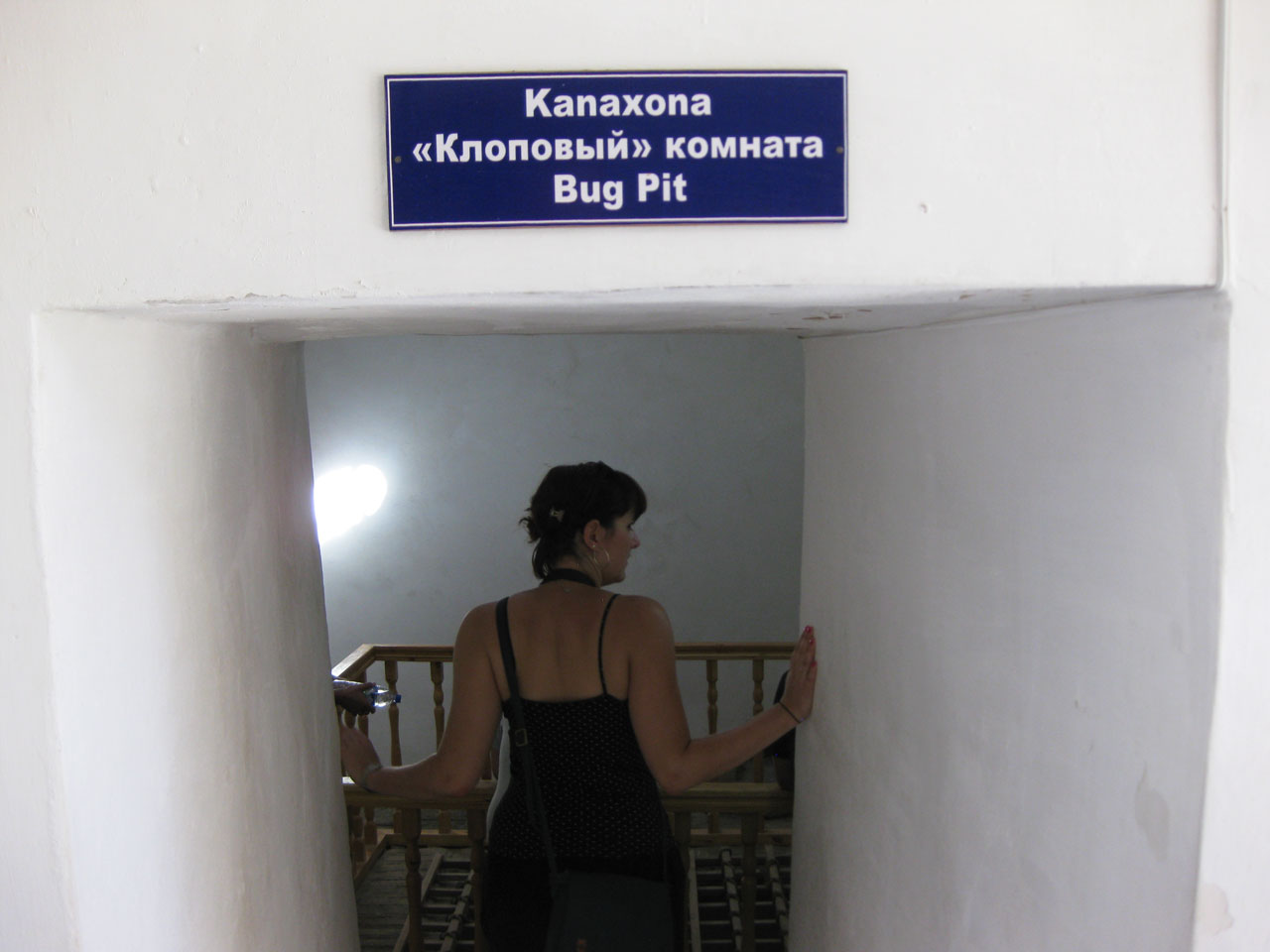 The final straw came when Queen Victoria failed to reply to a letter that Nasrullah had sent her, and the two officers were duly forced to dig their own graves and then beheaded on the square in front of the Ark, which provoked uproar back in Britain. The Ark is still standing, and though the walls are crumbling away in places, it’s still an impressive fortification, looming over the surrounding streets. Craning my neck to look up at where Nasrullah would have been, I could almost imagine him sat there, grinning maniacally, as the sand below was spattered with the blood of the insolent foreigners who had wronged him so. 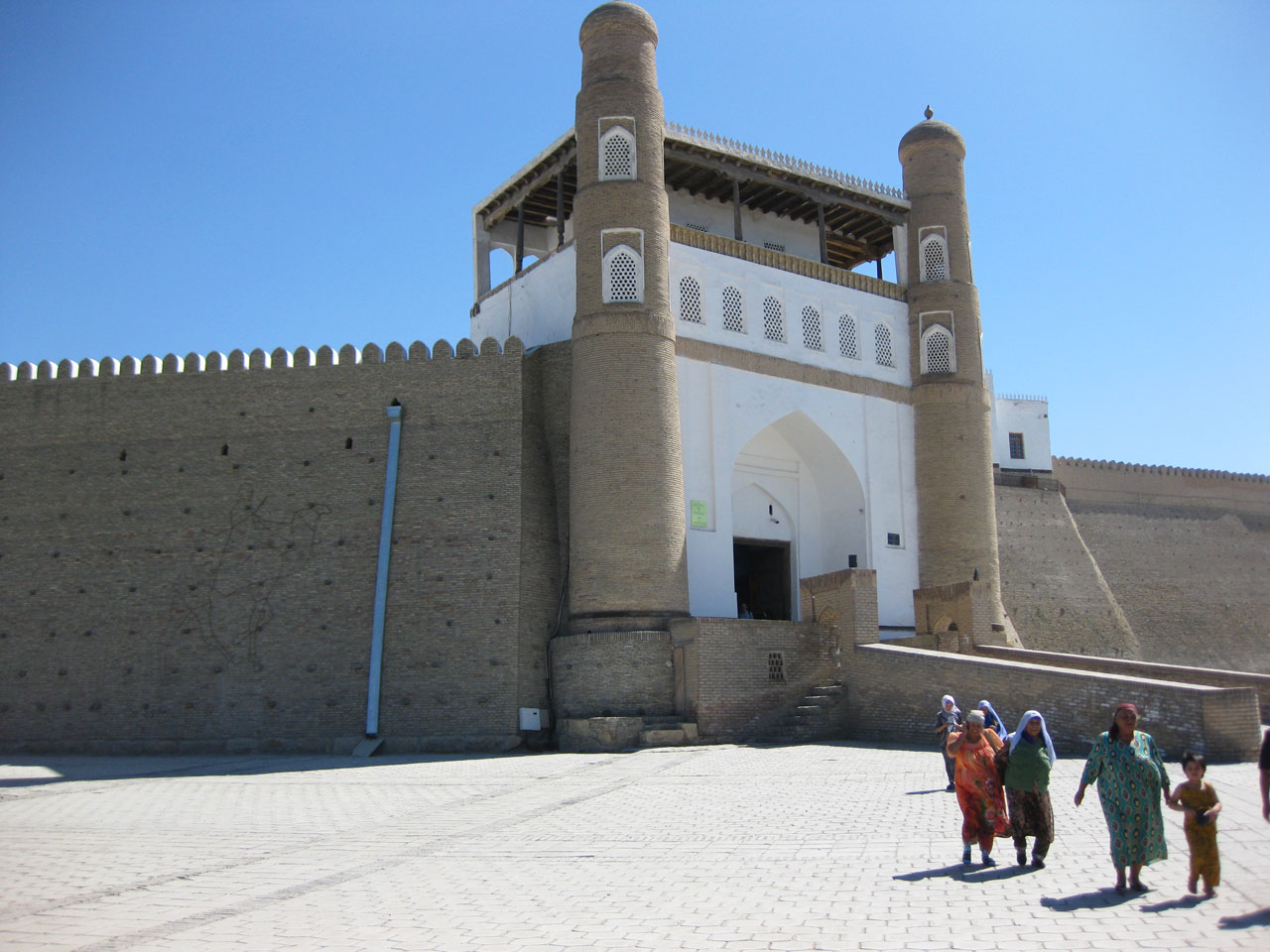 Thankfully this attitude towards outsiders is a thing of the past. Bukhara nowadays is a very laid back place, with some of the friendliest people we encountered anywhere in Uzbekistan. As we walked along the dusty streets near our hotel, the local kids would wave and call out to us in English, and craggy-faced old men in tall black hats would greet us with an “Assalomu aleykum”, right hand placed on their heart, an infectious gesture of warmth that I soon found myself reciprocating.

Bukhara also has a different ethnic make-up to much of the country; the majority of Bukharans speak Tajik as their first language, which is a form of Persian, quite different to the Turkic language of the Uzbeks. The former Soviet republics of Central Asia are full of little enclaves like this, thanks to the devious way in which Stalin drew up their borders. This was designed to ensure that no republic could be self-sufficient in terms of natural resources, nor ethnically homogenous, which would prevent the development of any coherent national identity. This has created all sorts of problems now that the republics are all independent, ruled by a collection of corrupt and autocratic rulers who seem incapable of working together in the region’s wider interest. 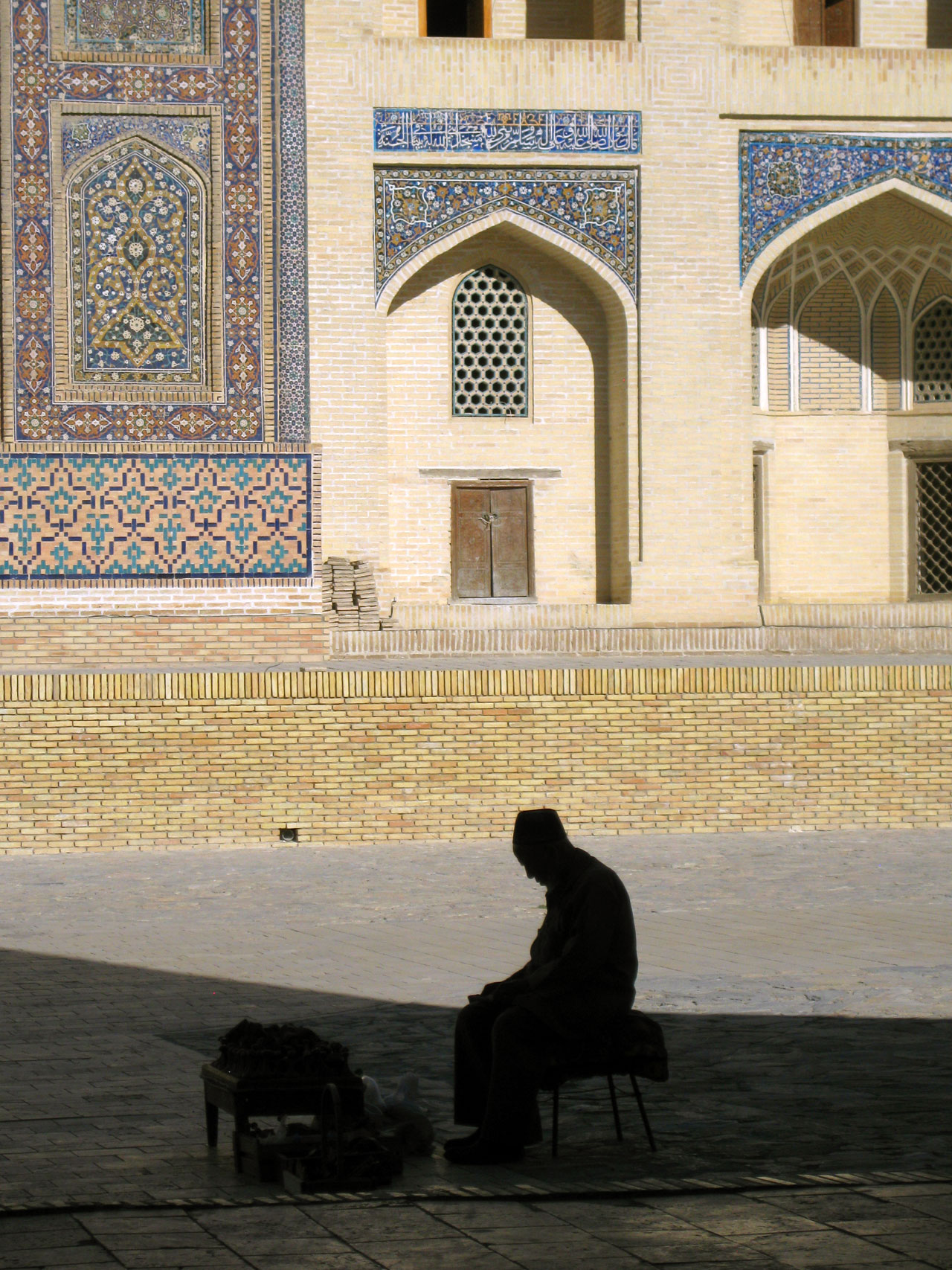 The legacy of the Soviets also lives on in other ways. We visited the Museum of Art, a bizarre collection of pretty unremarkable recent paintings and some older, peculiarly Central Asian interpretations of the Soviet socialist realist style, portraying scenes such as Uzbeks in traditional costume driving tractors. We were the only visitors in the gallery, and as we walked around a lady hovered just behind us, turning off the lights in each room as we left it, presumably to keep electricity bills to a minimum. At one point Polly realised she hadn’t seen everything in the previous room and tried to go back, earning a stern rebuke from the gallery attendant; a strict one-way system was clearly in operation. 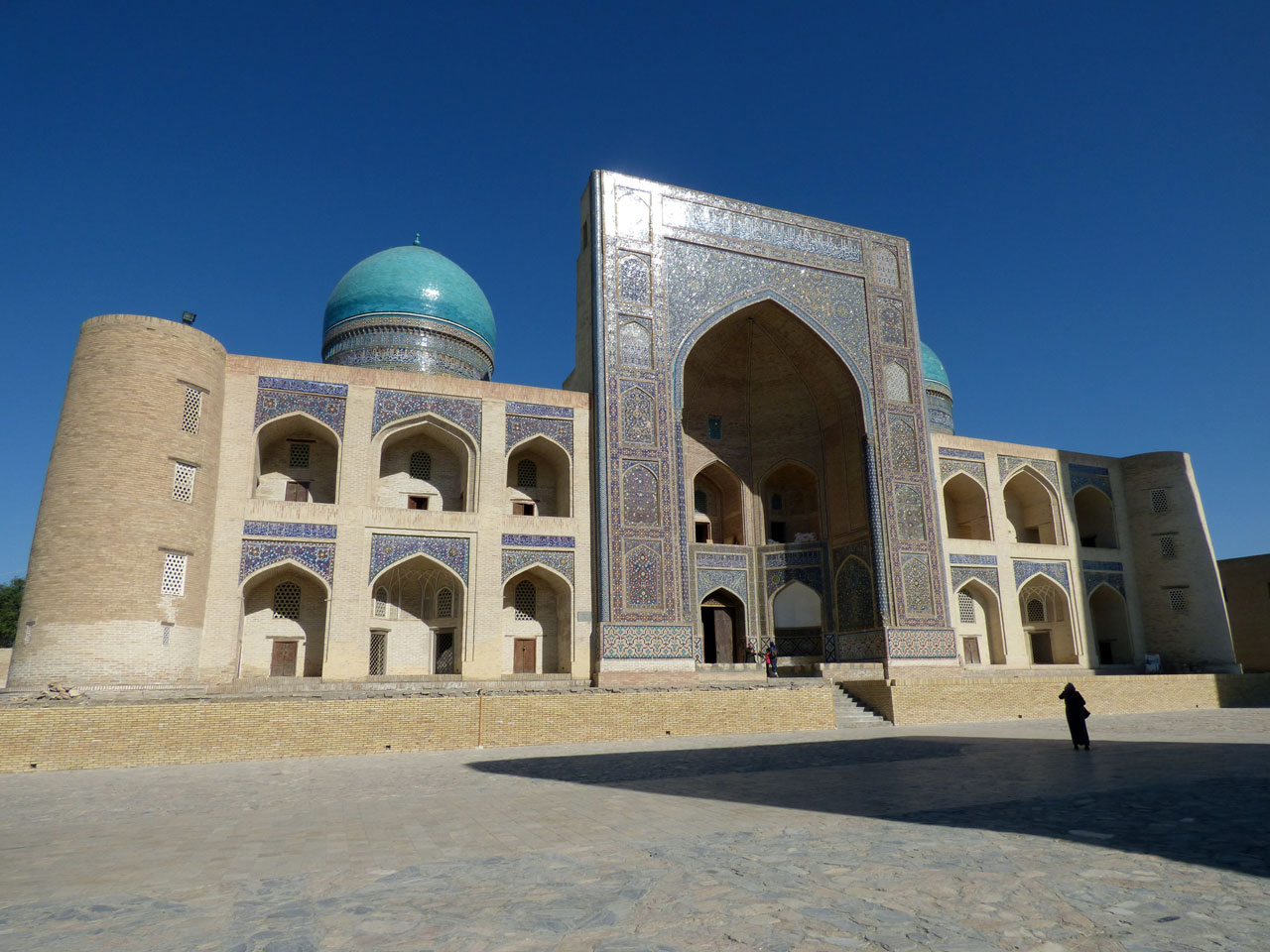 My overriding impression of Bukhara, however, was of a thoroughly pleasant place to spend a few days. Every night we ate on a rooftop terrace in the centre of town, watching the sun go down over the sand-coloured domes and minarets, the sky fading to a dusky desert pink. Wherever we went we were greeted with smiles and people eager to try out their English, and although it’s quite a touristy city by Uzbek standards, it never felt remotely crowded. Whereas I felt that we saw pretty much all there was to see in other cities we visited, Bukhara is somewhere I would definitely go back to, and it really is surprising that it’s so little known in the West.

The Kyzylkum Desert is the Central Asia you imagine when you look at a map: vast, inhospitable, empty. Yet a lot of history fills the barren land between the Amu Darya and Syr

The sun-baked city of Khiva sits between two bleak and inhospitable deserts, the Kyzylkum and the Karakum. As you approach the city limits the rusty brown sand begins to sprout unlikely patches of

Not Here
—
Bukhara: The holiest city you've never heard of
Share this