The Kyzylkum Desert is the Central Asia you imagine when you look at a map: vast, inhospitable, empty.

Yet a lot of history fills the barren land between the Amu Darya and Syr Darya rivers (better known in the west as the Oxus and the Jaxartes), and crossing the Kyzylkum Desert was a key stage on the old Silk Road. Alexander the Great, Genghis Khan and Tamerlane all passed through here during their Central Asian campaigns; British and Russian spies traipsed across the desert disguised as holy men and horse traders during the intrigues of the ‘Great Game’; and in 1989 the Soviets crossed the Amu Darya with their tails between their legs after the mujahideen chased them out of Afghanistan.

Our own journey across the Kyzylkum began with the drive from Khiva, on the Turkmen border, to the holy city of Bukhara, a nine hour slog across largely featureless terrain. Setting off from Khiva we passed briefly through Karakalpakstan, an autonomous republic that makes up a third of the total land area of Uzbekistan. Karakalpakstan has its own government, its own flag and its own language, similar to Kazakh, but it’s a pretty bleak place, still suffering the terrible effects of the Aral Sea disaster. The Aral Sea was once the fourth largest lake in the world, but has been shrinking since the 1960s thanks to an ill-conceived Soviet engineering project that diverted the Amu Darya and Syr Darya in order to irrigate the cotton fields of Uzbekistan. By 2007 the Aral Sea had shrunk to a tenth of its original size, and the salt from the sea bed combined with various unpleasant chemicals in the desert sand has caused untold health problems for the people of Karakalpakstan. 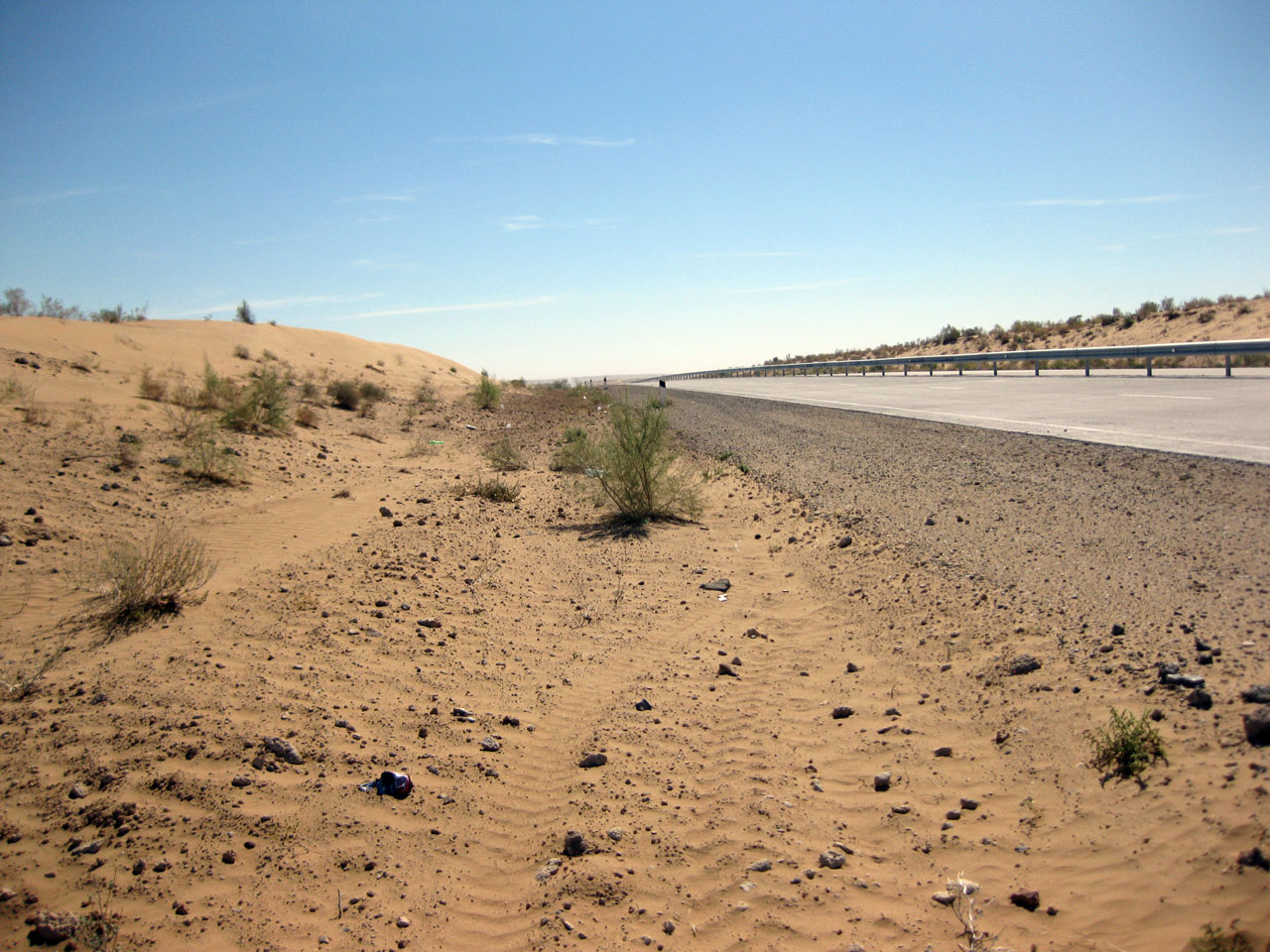 I would have liked to have seen the remnants of the Aral Sea, and the rusting ships that now lay beached in the middle of the desert, but sadly we didn’t have time on this trip. Instead we crossed the Amu Darya and struck east, travelling along the desert highway that runs all the way to the Afghan border. This road is currently being rebuilt by a joint Chinese-German-South Korean venture, part of a long term project to reintegrate Afghanistan into the region. The first couple of hours driving on the new road surface were surprisingly smooth, though eerily empty of traffic for much of the way; at one point we passed a man riding a donkey cart the wrong way down the dual carriageway, a scene that wouldn’t have looked out of place in Borat.

As the hours passed the appearance of the desert subtly changed, from a rusty brown landscape populated by the occasional Bactrian camel, to an almost Saharan vista of golden dunes blowing across the road, before levelling out into an arid grey-brown steppe. We stopped for lunch at a flyblown restaurant in the middle of nowhere, the modern equivalent of the old caravanserais that would have lined the route taken by the old Silk Road travellers. In those days it would have taken a couple of weeks to reach Bukhara by camel, and it must have been an unimaginably difficult journey. 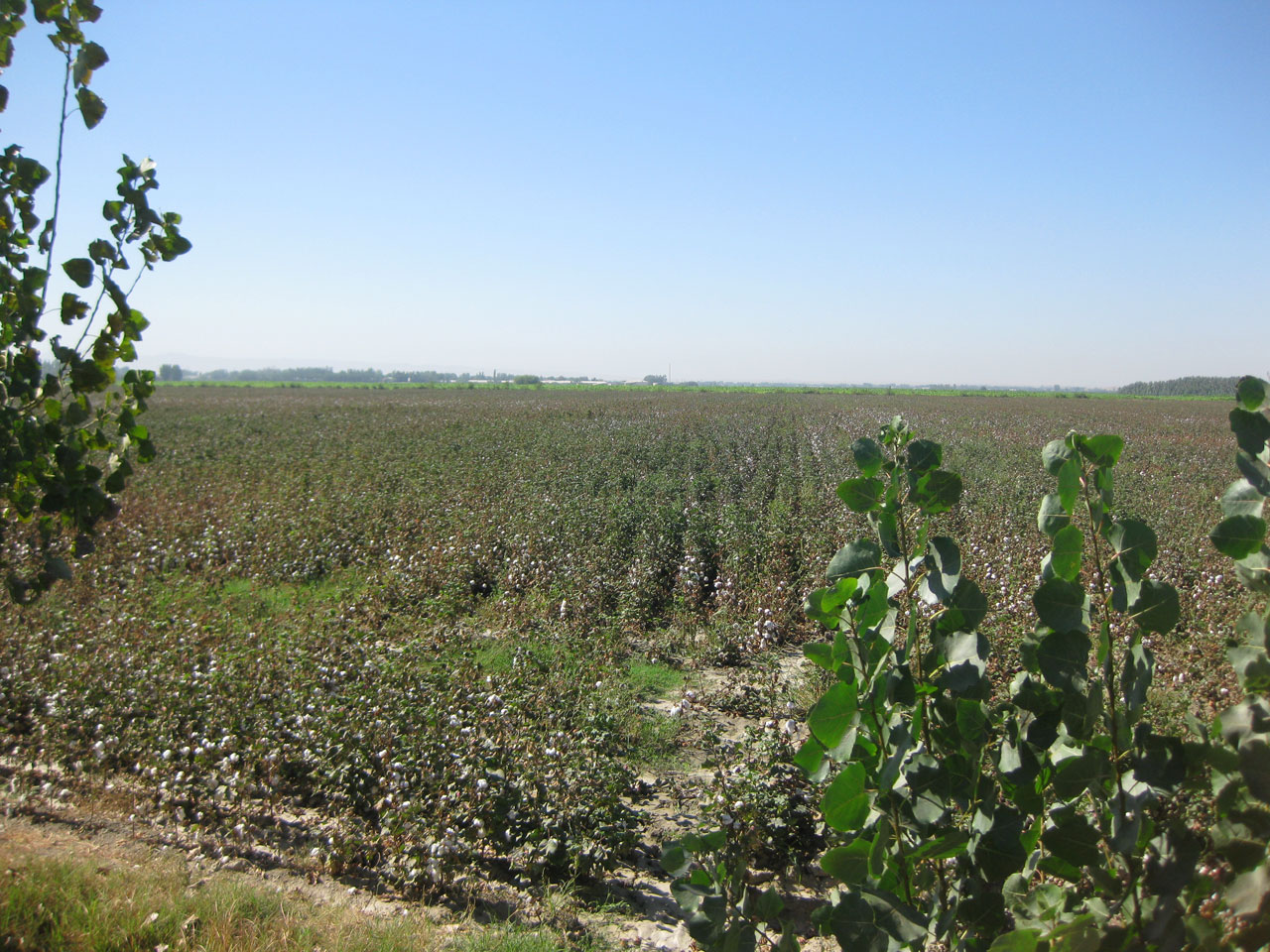 As we approached the Bukharan oasis the desert started to turn green again, the tufts of camel grass giving way to endless cotton fields. Although cotton production has halved since Soviet times, the Uzbek government still insists on enforcing the cultivation of what is a wildly unsuitable crop for a desert climate. The only way the cotton industry remains economically viable is thanks to the government’s policy of forcing its citizens to carry out compulsory, unpaid labour in the fields, including children as young as nine years old. This appalling situation has led to many international clothing brands boycotting Uzbek cotton, and in 2012 the government responded by announcing that they had banned children from working in the fields. Whether this practice has been entirely eradicated is highly dubious, however. Later on in our trip we saw an enormous convoy of school buses, complete with a police escort, transporting students from Samarkand out to the cotton fields, though we weren’t close enough to see how old they were.

After a three-night stay in Bukhara we were back on the road and heading into the desert again, this time to the northern reaches of the country close to the Kazakh border. When you drive across Uzbekistan you constantly have to stop at police checkpoints, another way that the Karimov dictatorship exercises tight control over the population, and we enjoyed a comic interlude at a checkpoint just outside the town of Nurata, where a couple of elderly Uzbek men had broken down in a battered old Lada. The police had to help one of them push the car through the checkpoint, and as the engine sputtered back into life the poor bloke went running off down the road after it, his old legs unable to carry him quite fast enough to catch up. 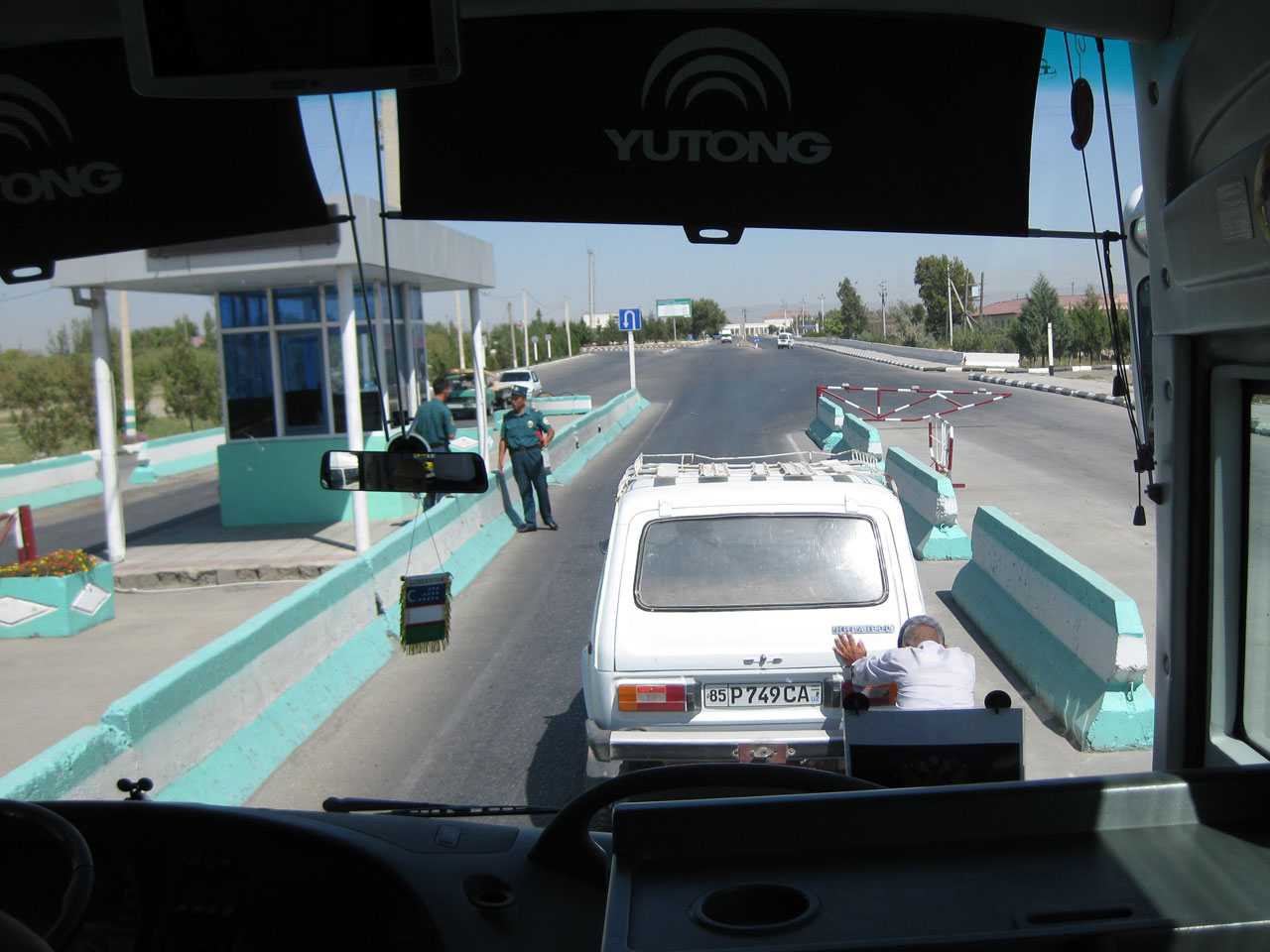 Happily we suffered no such mishaps, and we proceeded to Nurata, a small town at the western end of the Pamir-Alay mountain range that was founded by Alexander the Great. At the top of a hill on the south western edge of town are the ruins of the fortress he built here, looking out across the Kyzylkum. We climbed to the base of the fortress to admire the view, a widescreen vista of bleached desert and jagged brown mountains, and it brought home to me just how far Alexander must have travelled in the course of his military conquests. It felt an awfully long way from Macedonia, where we’d seen so many statues of the great general a year previously. 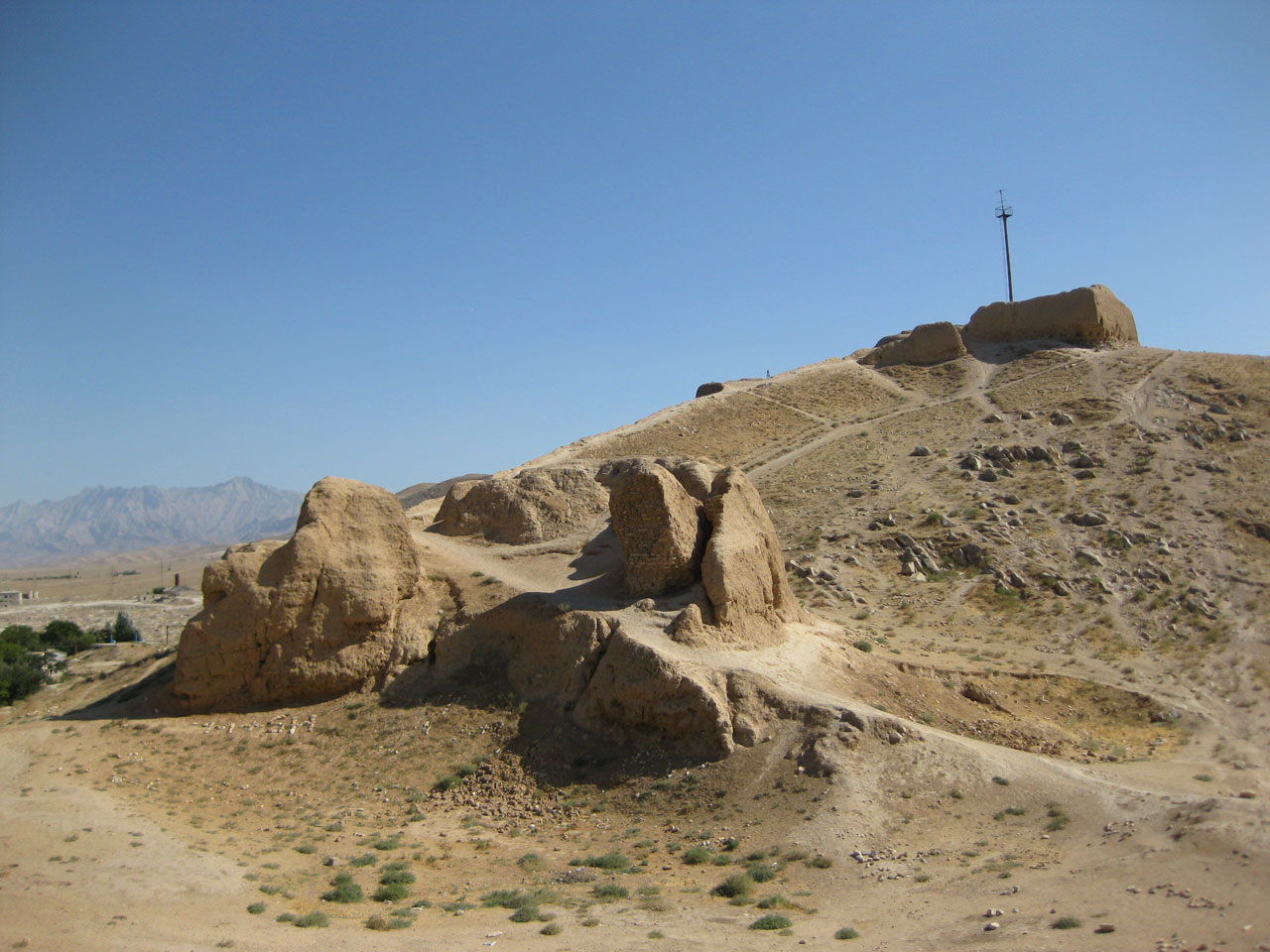 Below the fortress is a mosque, a mausoleum and a pool full of hundreds of trout fed by the Chashma Spring, a place of pilgrimage which is said to have appeared when the Prophet Mohammed’s son-in-law, Hazrat Ali, drove his staff into the ground. A couple of curious local kids came and sat next to us as we cooled off in the shade, and conversed with us in the only way they knew how. 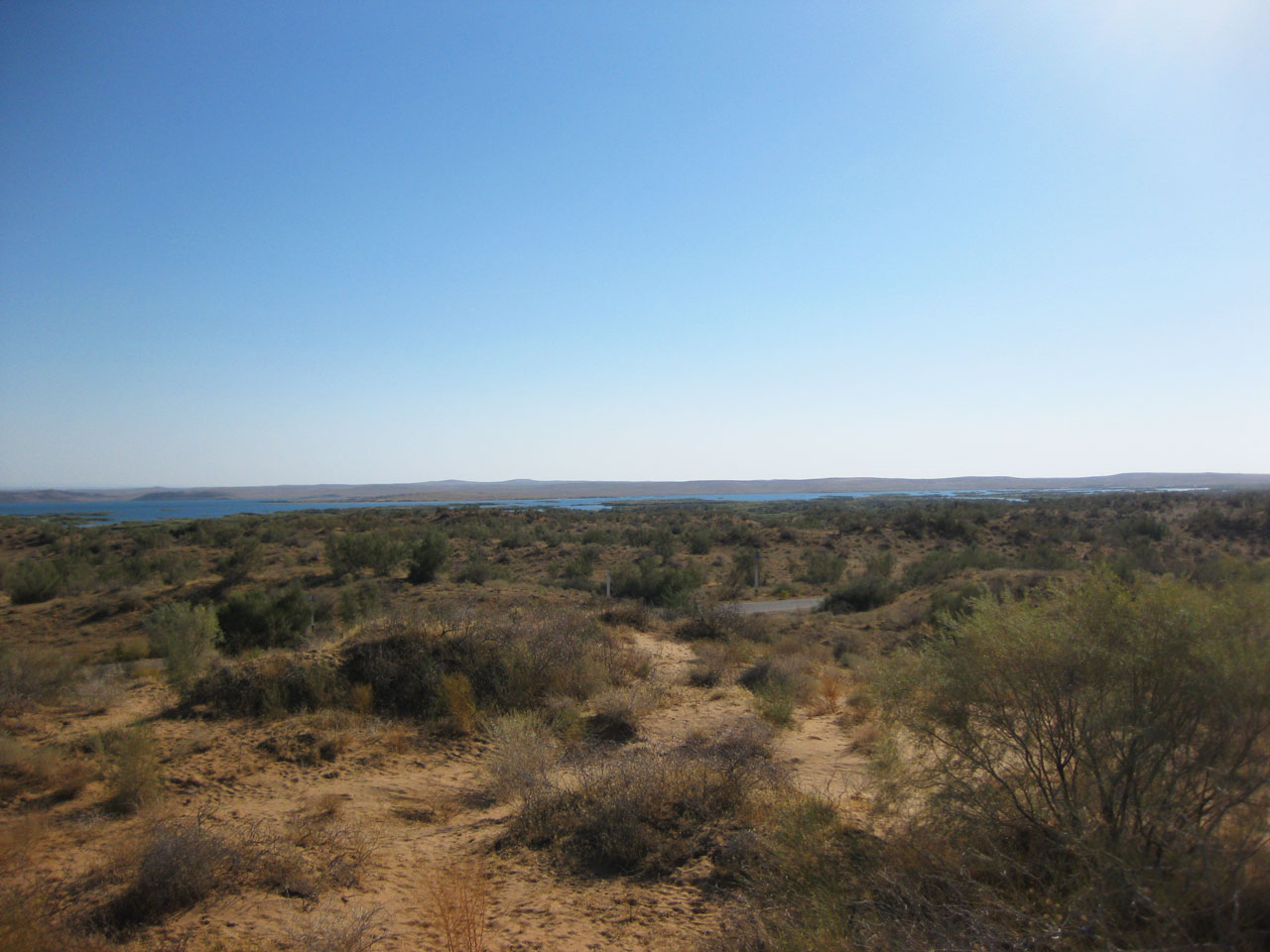 From Nurata we headed north into still emptier reaches of the map. On the other side of the mountains the landscape flattened out and the sky seemed to expand dramatically, as we entered the southern fringes of the vast steppe that stretches from Mongolia in the east to Hungary in the west. Our destination was a yurt camp in a place called Yangikazgan, an utterly remote location near the huge, manmade Lake Aydarkul. 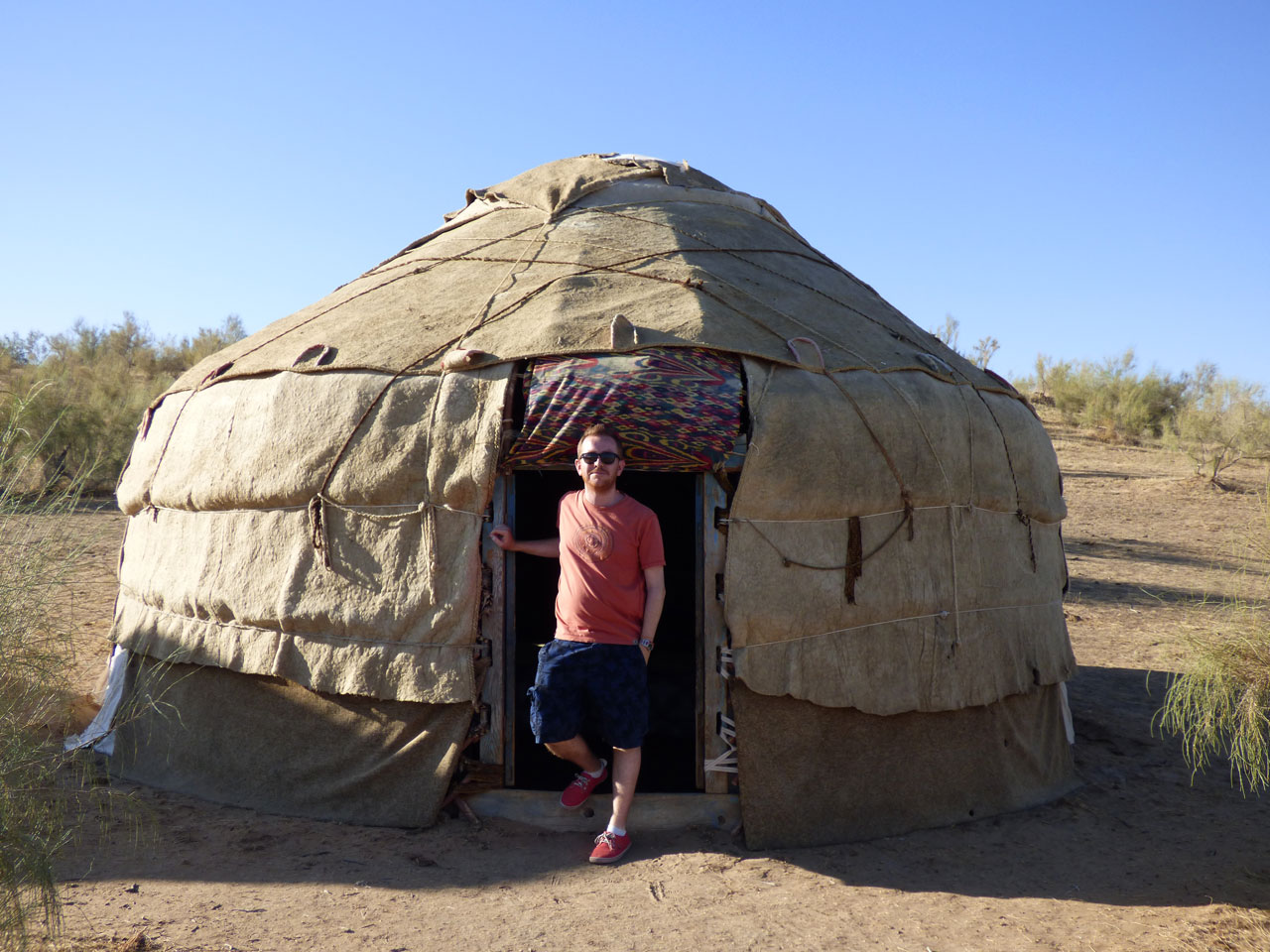 Although the camp has obviously been created for tourists, it was a great experience nevertheless. It really did feel like we were in the middle of nowhere, and as the sun started to drop we went on a camel ride over the dunes. The desert was eerily quiet and still around us, the only discernible movement coming from the occasional ground squirrel scrabbling around in the sand. It was my first time on a camel, and to be honest I didn’t find it the most comfortable experience. Again I found myself wondering how on earth those old Silk Road travellers managed to survive days and weeks travelling through this harsh environment, on the back of a creature such as the one whose humps I now found myself wedged between. 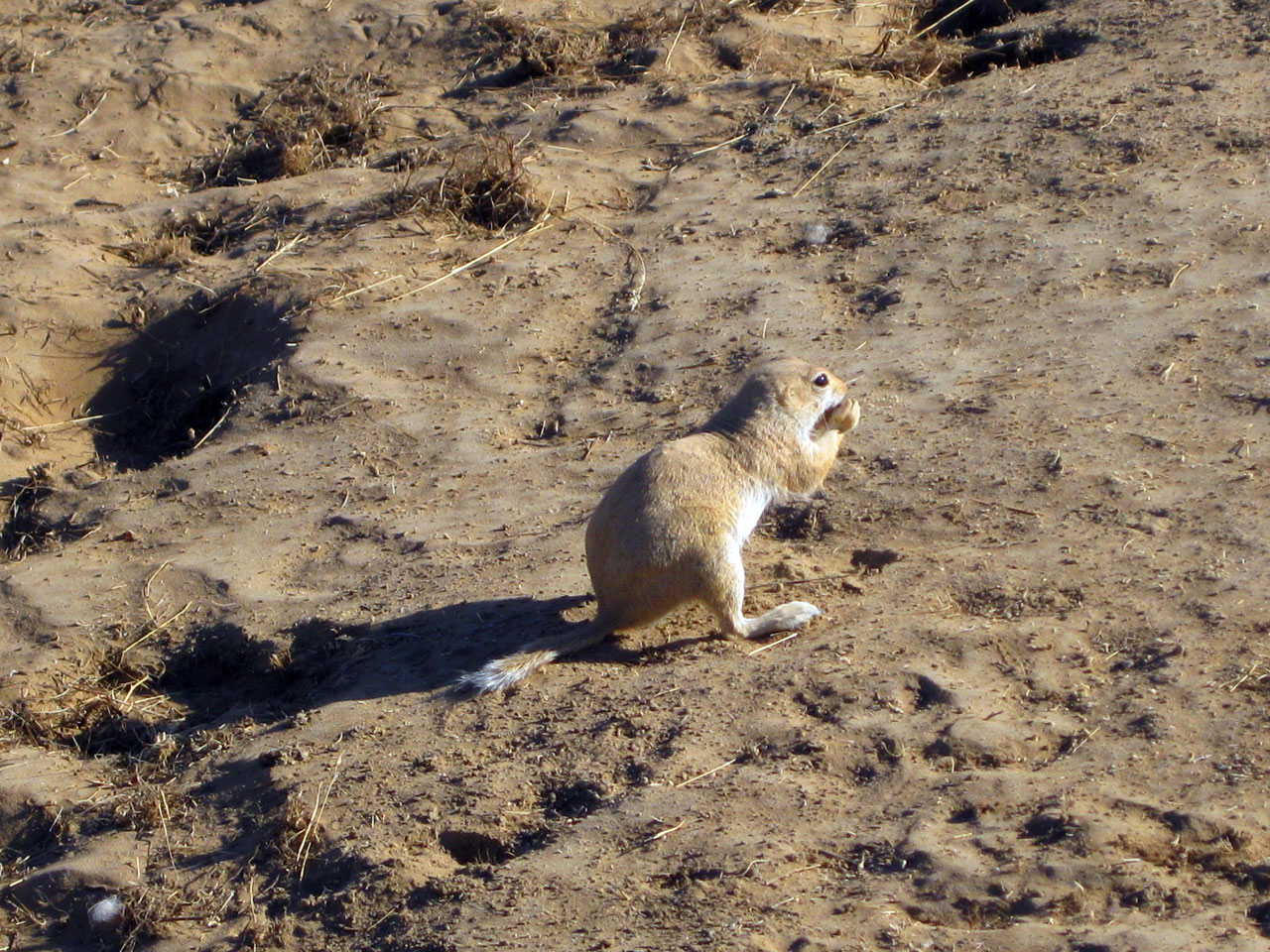 As night fell we sat down for a simple but delicious dinner, and the desert came alive with insects of all shapes and sizes. Kamikaze moths pinged off the lightbulbs hanging above us, damselflies crashlanded in my stew and fat black beetles darted around the floor. I felt like we were very much intruders in this landscape, an alien species far from its natural home. After dinner we sat round a campfire under a perfectly clear sky, lit up with more stars than I’ve ever seen in my life, and a hush descended as a local musician treated us to a series of beautifully haunting Kazakh ballads. Just for a moment, those old Silk Road travellers didn’t seem so distant, and home seemed further away than ever. 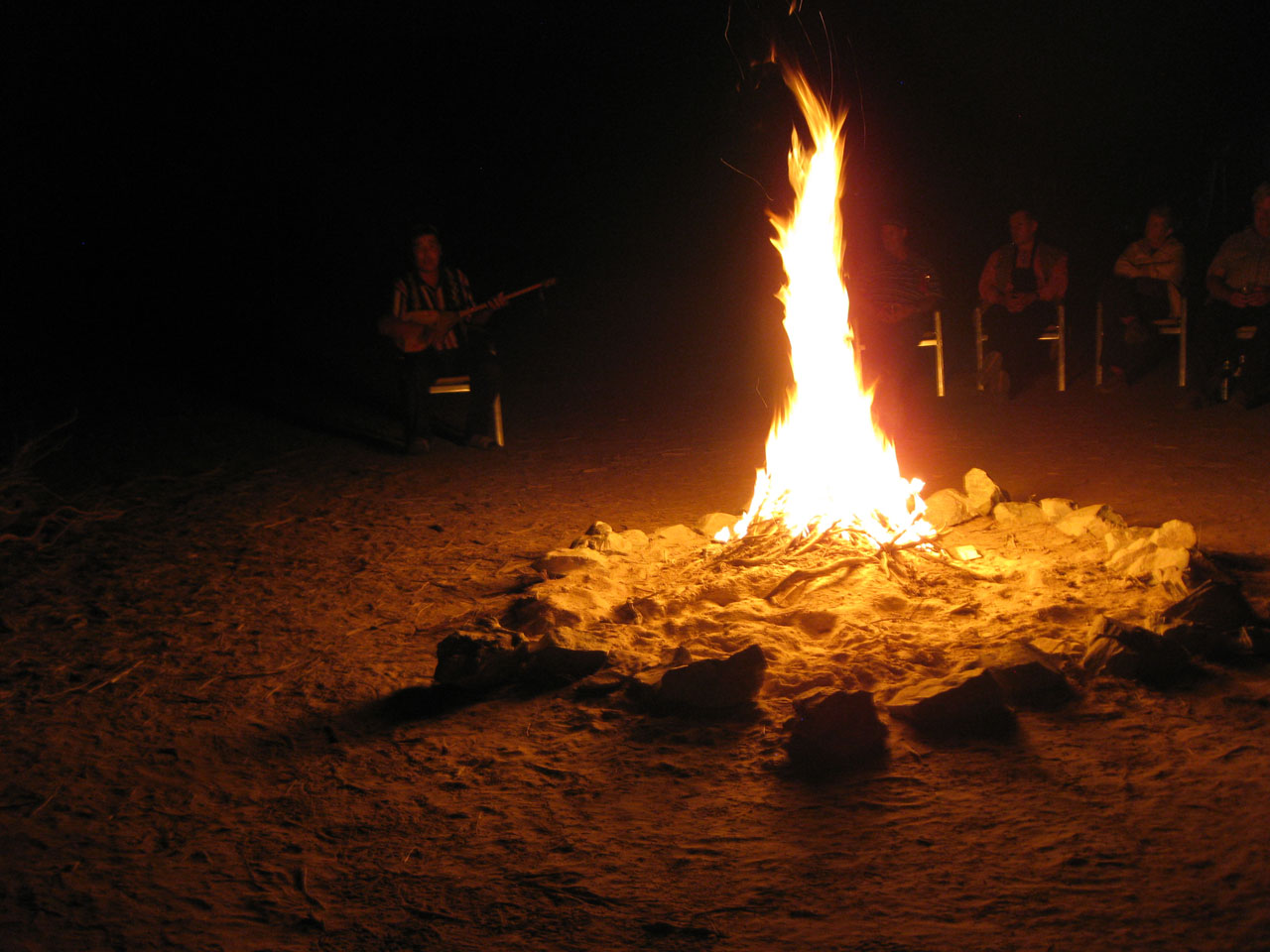 If you’ve only ever heard of one place in Central Asia, it’s probably Samarkand. This ancient city, one of the most important stops on the old Silk Road, once shared the

I’m not usually superstitious, but I’m pretty sure that the ghost of a tenth century Persian emir cured me of diarrhoea. My stomach had been suffering for a couple of days,