Although it might not be the first place that springs to mind when you're out shopping for a full-bodied red, there is compelling evidence that Georgia is the birthplace of wine.

People have been quaffing alcoholic grape juice in the mountains of the South Caucasus for at least 8,000 years, and wine remains Georgia's most important agricultural export. Our visit to the country was relatively brief, so we only gave ourselves a day to take a whistlestop tour of Kakheti, the region of eastern Georgia where the majority of the country's wine is produced. 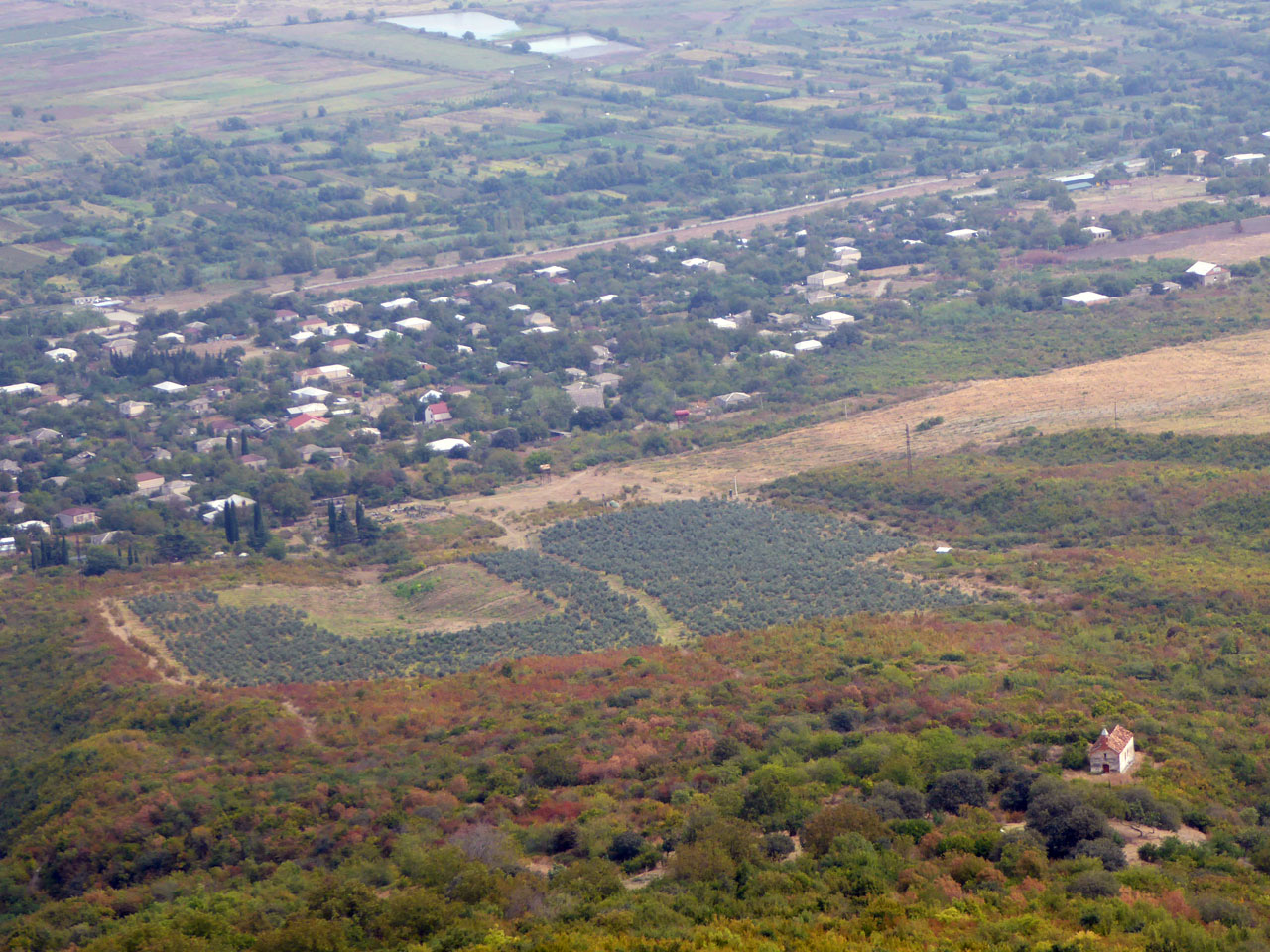 We arranged our tour with a local guide named Rezi, who picked us up from our hotel in Tbilisi just after breakfast. As we drove out into the countryside we had an opportunity to ask him all the questions about Georgia that we'd accumulated over the last week, and he filled us in on everything from the separatist movement in Abkhazia to the growing popularity of rugby.

But the topic we returned to again and again was, inevitably, Georgia's frosty relationship with Russia. Since independence, and especially since the 2008 war, Georgia has been turning away from its northern neighbour and towards the West. The Russian language is no longer compulsory in schools, and Rezi's son belongs to the first generation of Georgians who will speak English as a second language rather than Russian. Visa restrictions mean that Russia has become a place that most Georgians only ever see on TV, despite a slight thaw in relations over the last couple of years.

"I have nothing against Russian people, just their government," Rezi assured us with a smile. "Although there are a few things I could say about Russian tourists..." 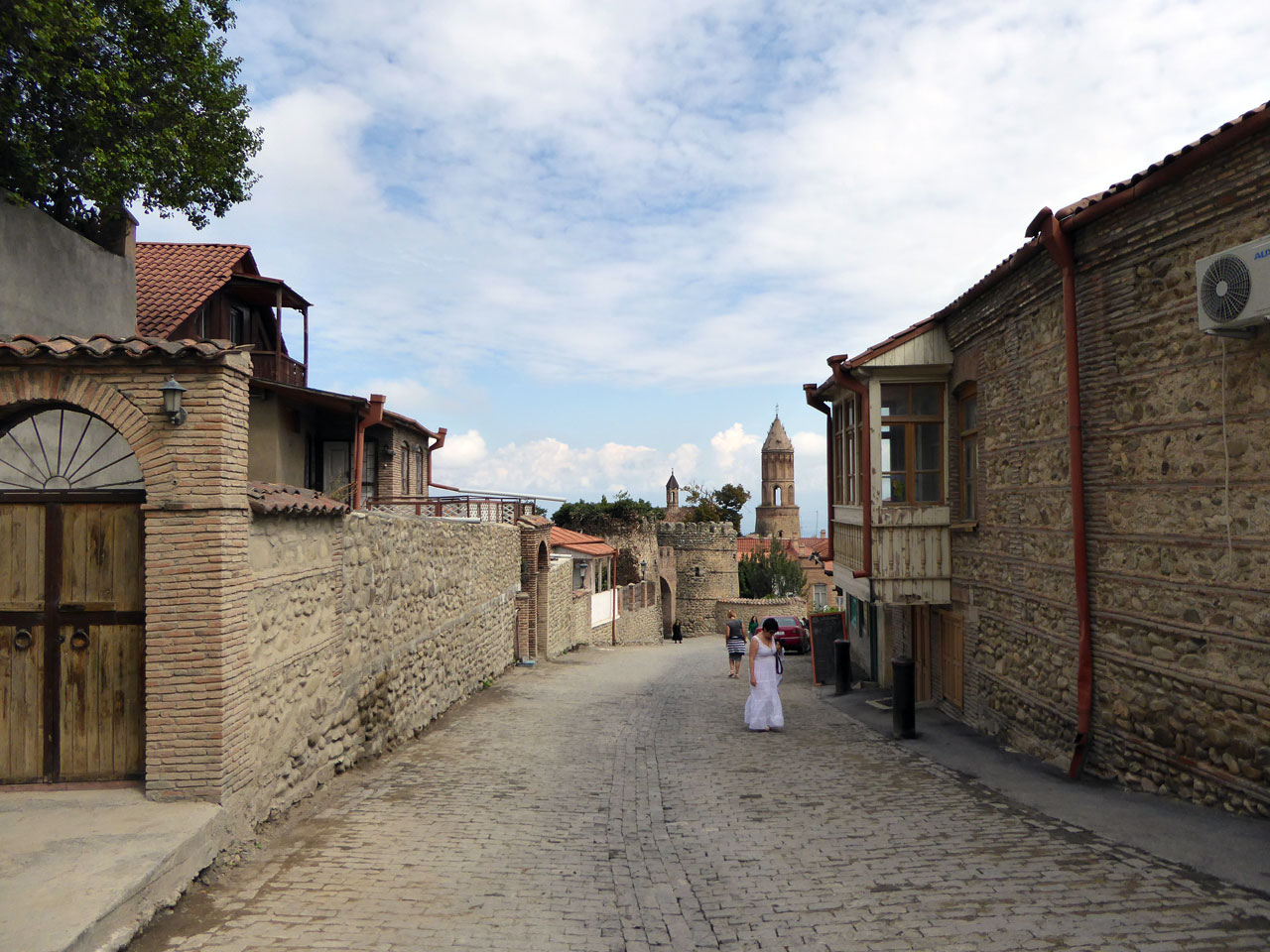 As we headed east the landscape began to swell with gently rolling hills, a very different topography to the mountain passes of Kazbegi. We made our first stop at the Bodbe monastery just outside Sighnaghi, close to the border with Azerbaijan. The monastery is built on the burial site of Saint Nino, a key figure in Georgia's fourth century conversion to Christianity. Just next to the monastery's original basilica, parts of which date back to the ninth century, a new church is currently being built because the congregation has outgrown the old one.

"I think this tells you something about Christianity in Georgia," Rezi pointed out. "I keep reading about all these churches in western Europe being turned into flats because no one uses them, but in Georgia we are still building new ones!" 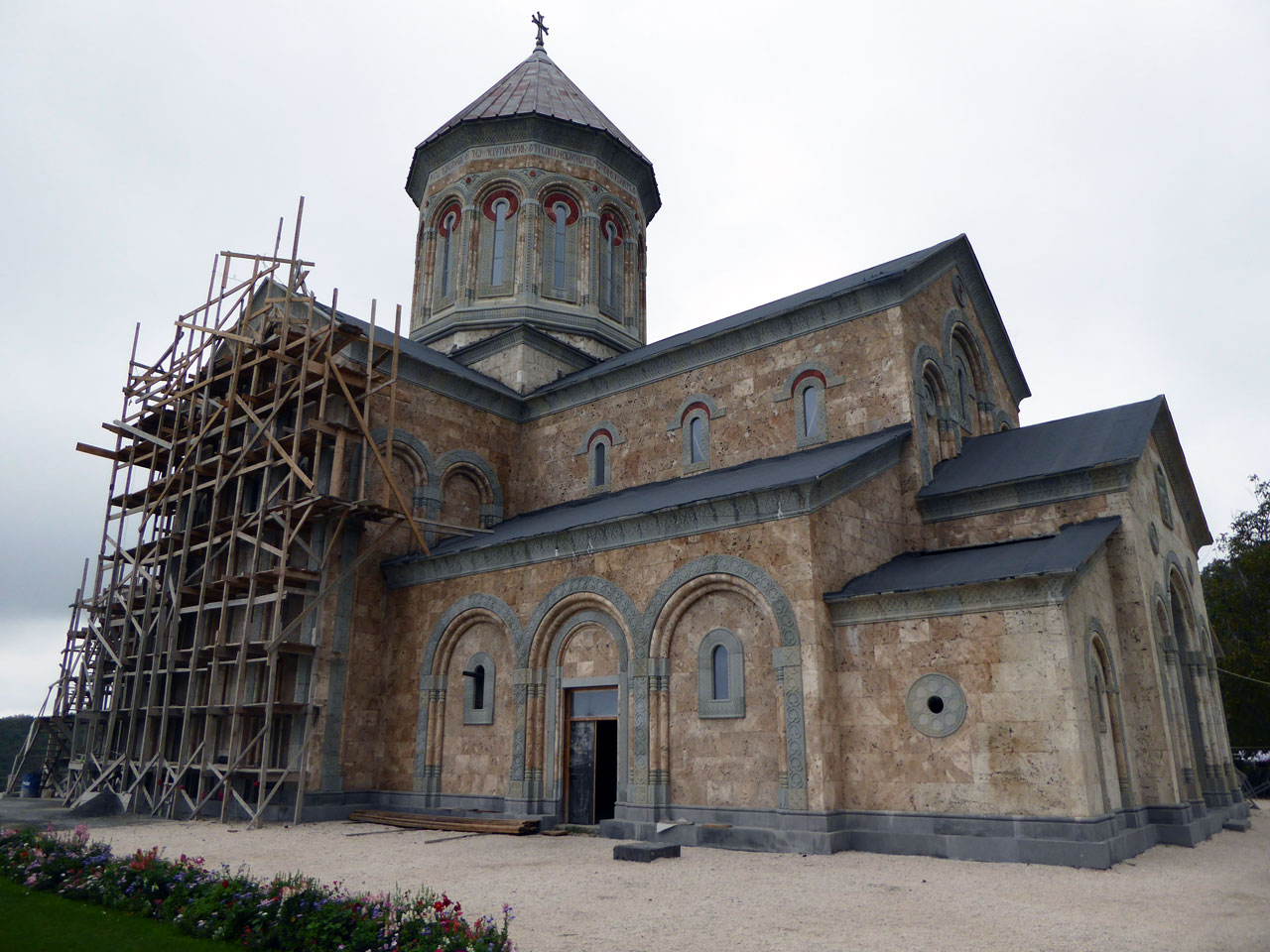 From the monastery it was a short drive to Sighnaghi itself, a pretty town that sits on a hilltop overlooking the Alazani river valley. We walked along the top of the town's eighteenth century walls, described by Rezi as Georgia's version of the Great Wall of China. These fortifications were built to protect the townspeople against marauders from Persia and Dagestan, with watchtowers looking out over the valley towards the Caucasus Mountains. 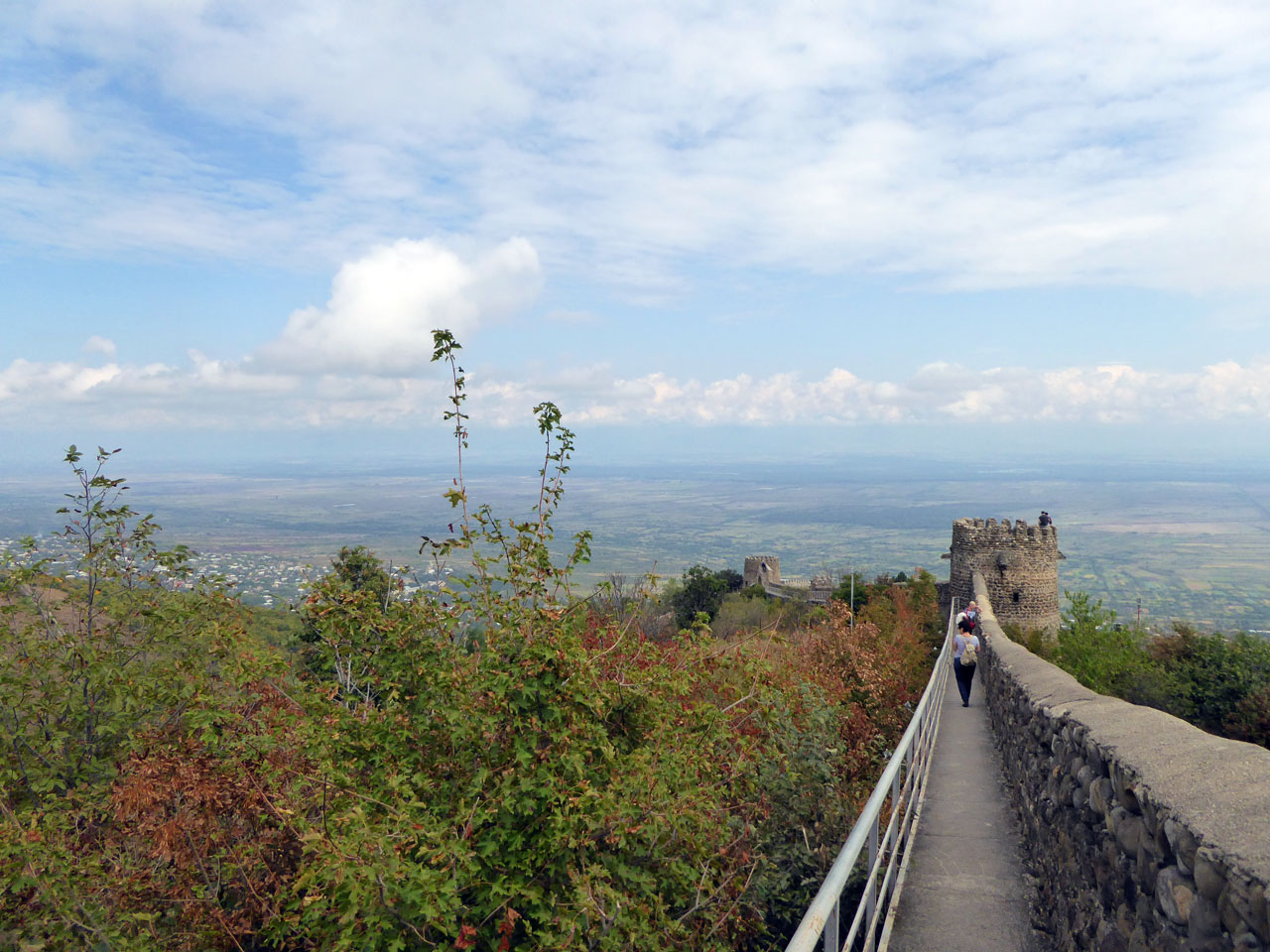 After a brief saunter around the town we were back on the road, heading northwest through vineyards and sleepy villages where flatbed trucks were piled high with freshly harvested grapes. We passed roadside stalls where chunks of raw meat and strings of churchkhela (candied nuts and grape must) hung limply in the sun. It was a bucolic landscape of green and gold, where cows and sheep frequently wandered into the road and farmers plodded past in donkey carts. 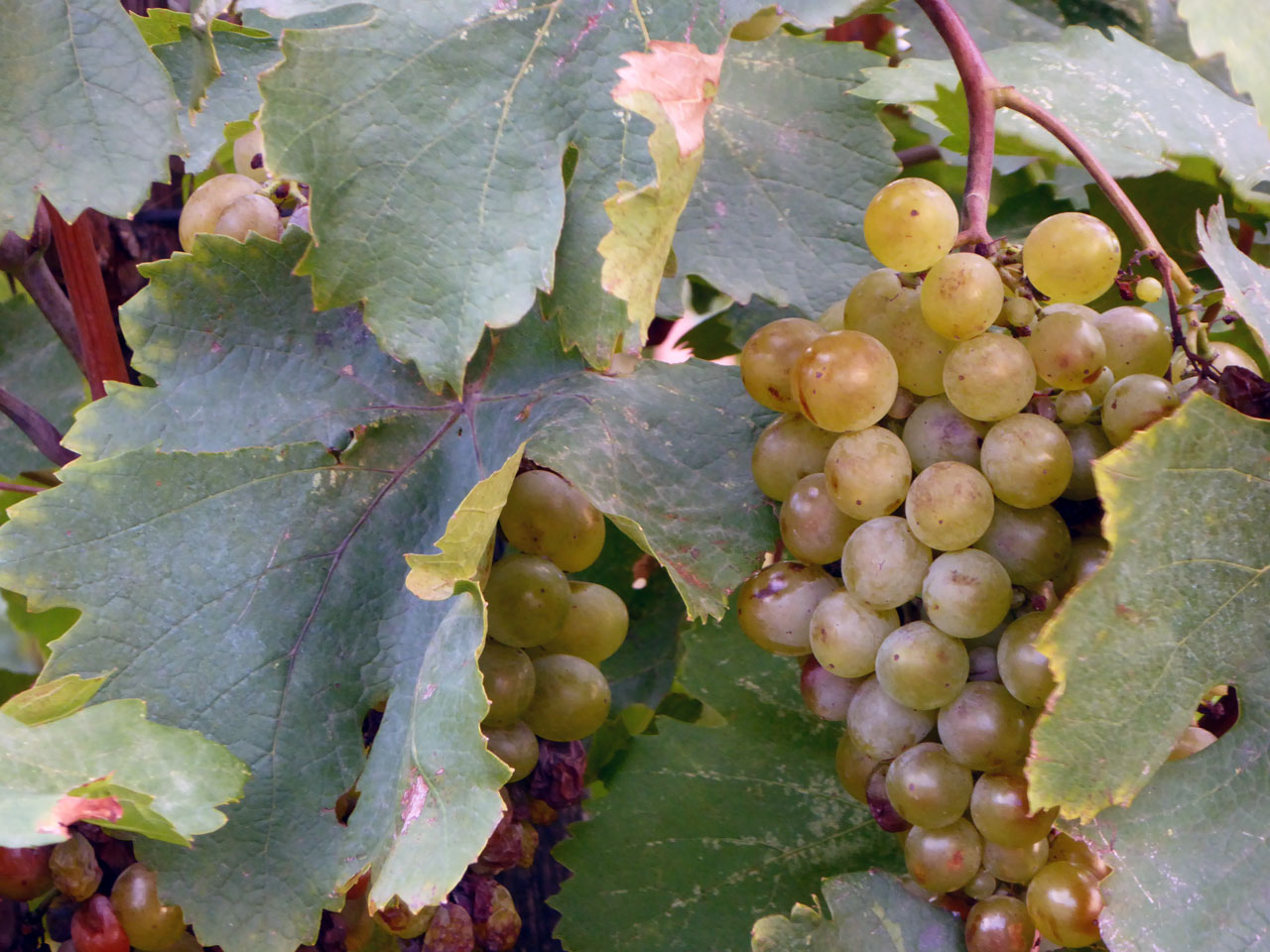 Our next stop was the village of Tsinandali, and the carefully manicured gardens of the Chavchavadze estate. At the centre of the estate is the elegant nineteenth century palace where Prince Alexander Chavchavadze lived, an eccentric character who played a big part in bringing the ideas of the European Enlightenment to Georgia. We had a bizarre tour of the house with a terse Russian tour guide, who rushed us from room to room, reeling off facts and figures in a heavily accented monotone and barking at anyone who dared deviate from her route for a closer look at the antiques on display. 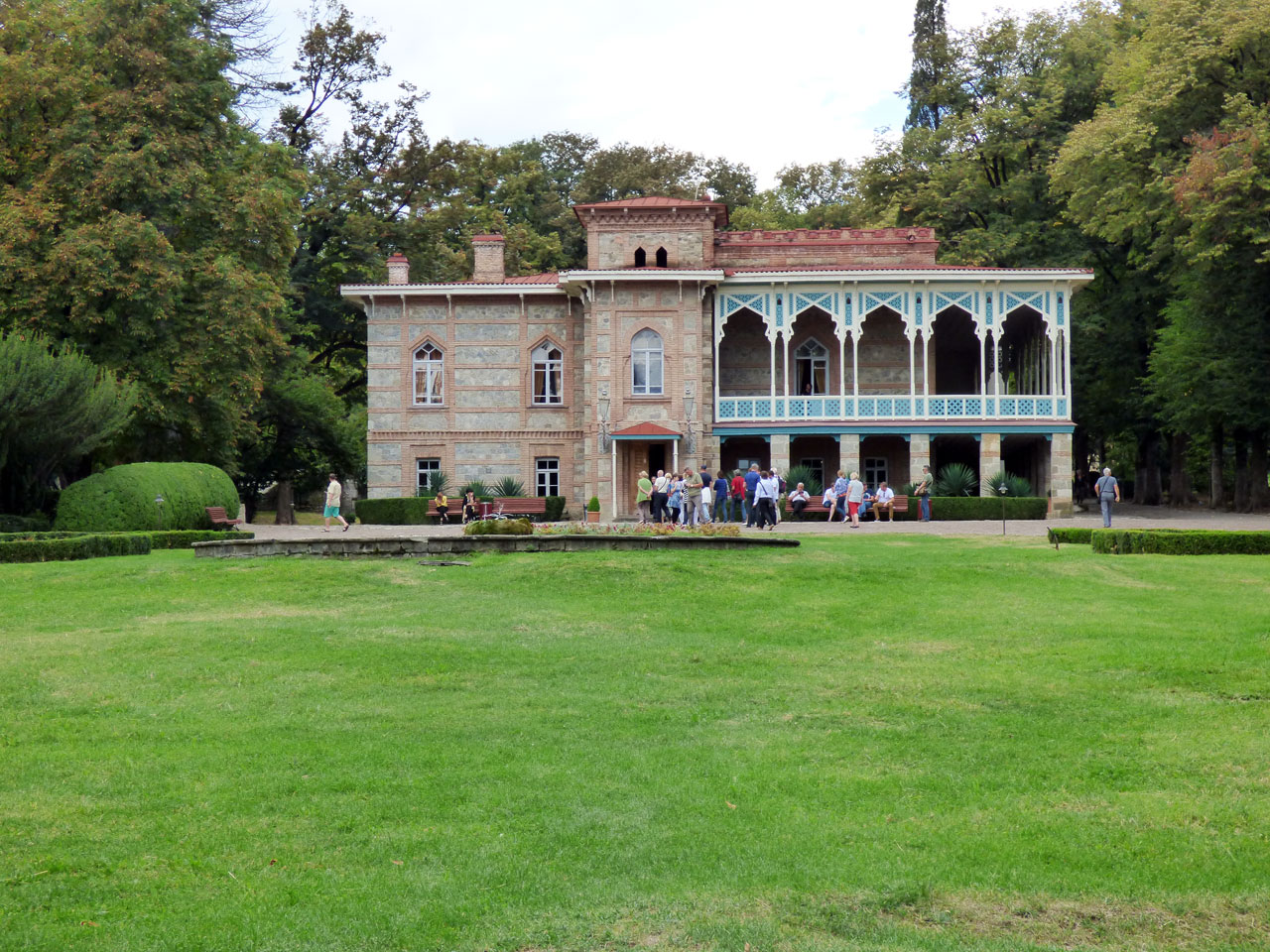 Prince Alexander also introduced European winemaking techniques to Georgia, and we had the opportunity to try several different wines at the end of our tour. We took a particular liking to the Saperavi and Mukuzani reds, and we also bought a couple of bottles of a very nice Tsinandali white. Slightly more of an acquired taste were the 'natural' white wines, made using the traditional qvevri method, where the wine is fermented in a clay amphora buried underground, with the stalks and skins left in. This gives the wine a stronger taste and a darker appearance, heavy on tannins, quite different to a typical European wine. 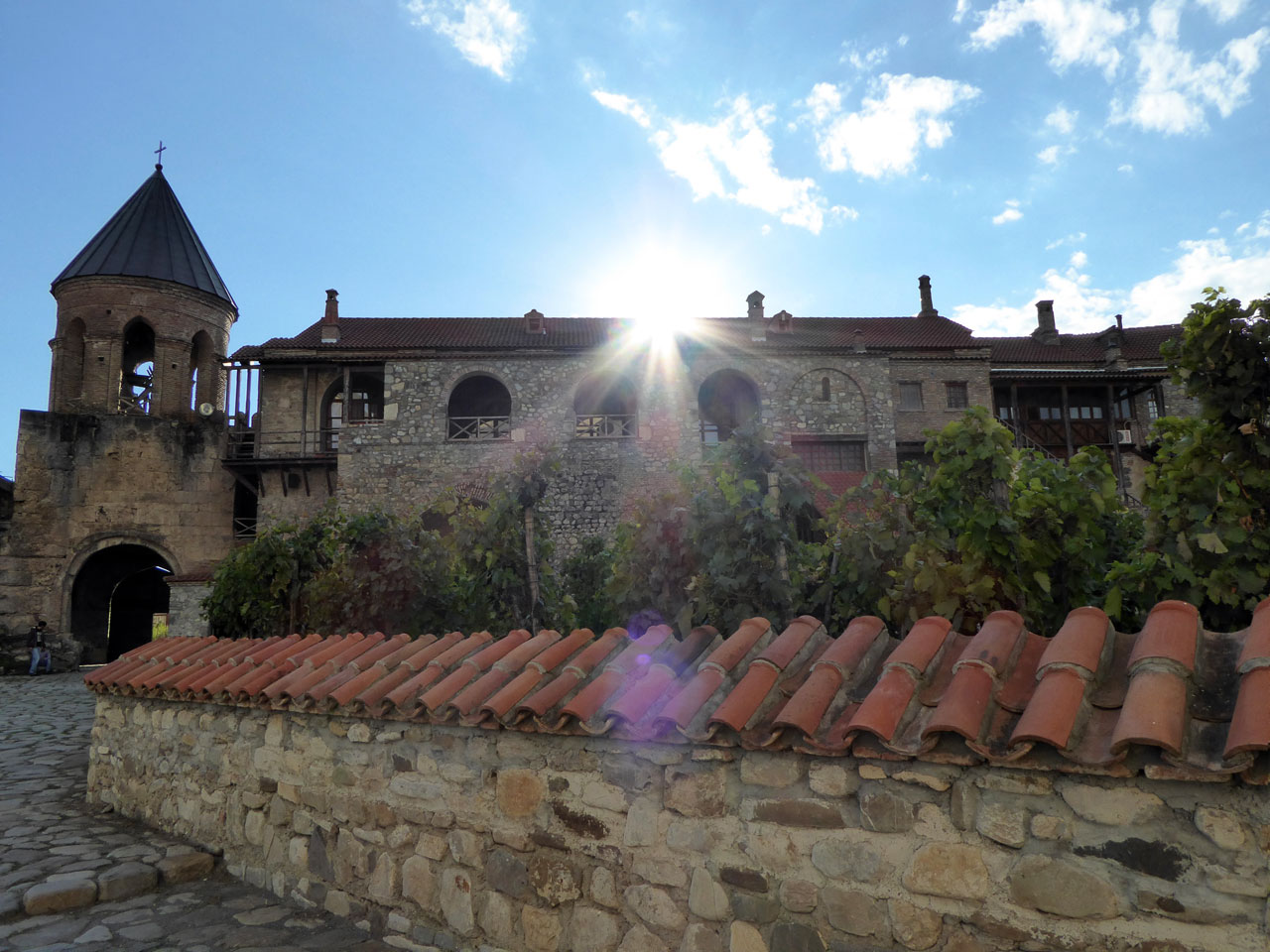 After lunch in the nearby town of Telavi we veered off the main road again, and headed north along a sun-dappled lane flanked by trees that could just as easily have been in the south of France. We were now approaching the foothills of the Caucasus, with the mountains hovering ever closer on the horizon. It was odd to think, amongst such idyllic and tranquil surroundings, that we were just 30 miles from the border with Chechnya, such a byword for violence and unrest in the 1990s. We came to a flat plain in the shadow of the mountains where the Alaverdi monastery stands, the site of a cathedral second in size only to the one in Mtskheta that we had visited the previous day. Opposite the cathedral was a small vineyard; this being Kakheti, the monks also make their own wine. 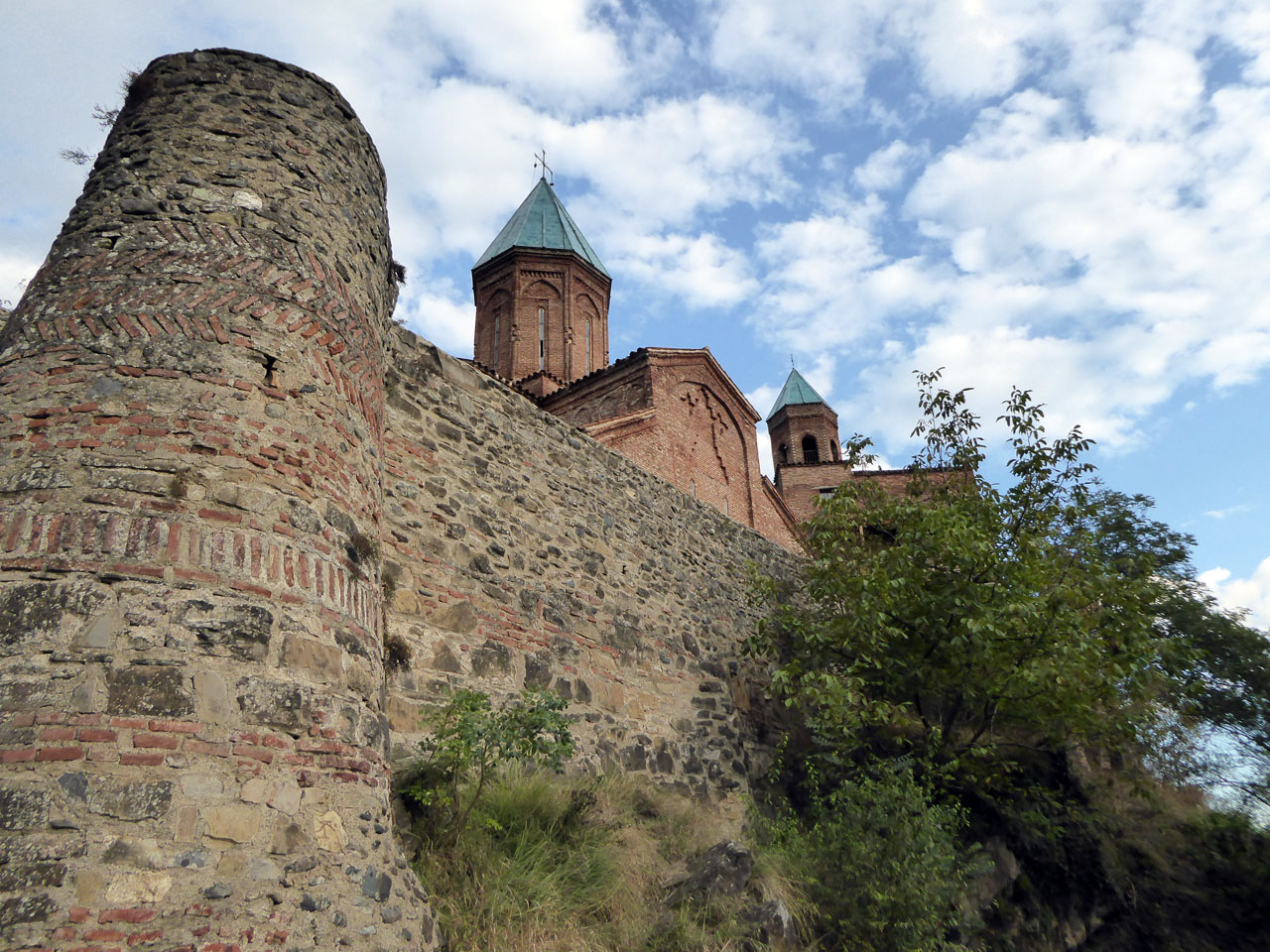 Our final stop was a place called Gremi, a short drive to the east. Gremi was once the capital of the Kingdom of Kakheti, situated on the old Silk Road, but most of it was destroyed by the Persians in the seventeenth century. A fortified hilltop citadel and monastery is all that survives, and it provided one of the most atmospheric moments of our whole trip to Georgia.

Inside the church a service was taking place, with two priests holding a gilded bible aloft and wafting incense around the dusky interior of the church, while a third chanted psalms and kissed the pages of the bible. We were lucky enough to witness a short passage of Georgian polyphonic singing, an entrancing sound even to the ears of a non-believer, recognised by UNESCO as part of the world's 'intangible cultural heritage'.

And at the back of the church, of course, there was a wine cellar. 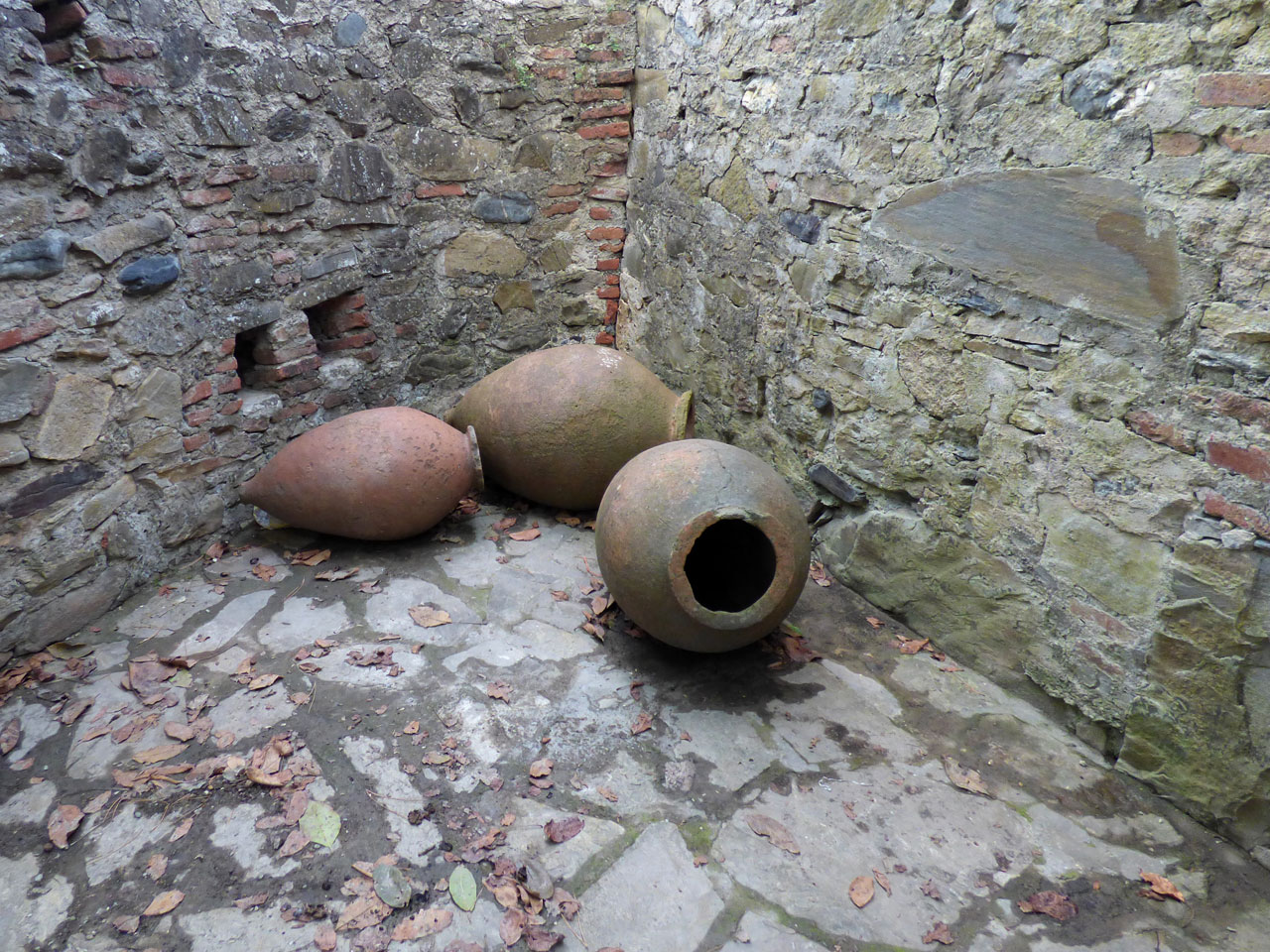 Imagine travelling to the little Austrian town of Braunau, which sits by the river Inn on the German border, and arriving in the main square to find people smiling and posing for photos