Our driver raised his head solemnly, looking up towards the monastery perched on a hill, and made the sign of the cross over his heart three times. As we hurtled along the road at an alarming speed, bound for the treacherous mountain passes of northern Georgia, it wasn't clear whether this was a simple gesture of piety or an appeal for divine protection from his own appalling driving.

The winding road known as the Georgian Military Highway heads north from Tbilisi to the Russian city of Vladikavkaz, following an ancient route through the Caucasus Mountains. Mentioned in antiquity by Strabo and Pliny, the road has long served as both a trade route and as a means of invading Georgia from the north. 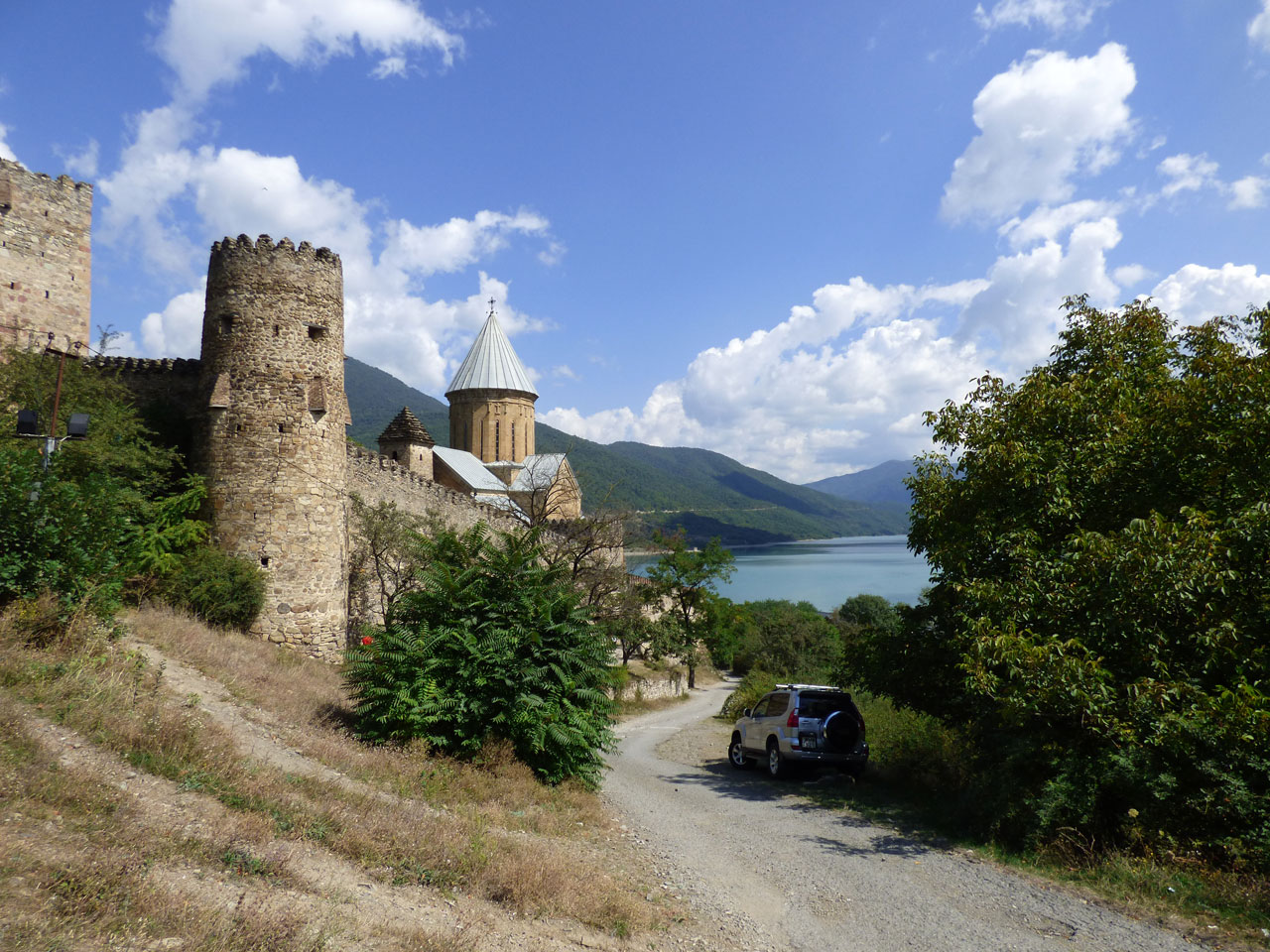 Our first glimpse of the sheer beauty of the High Caucasus came as we rounded a bend and the vast Zhinvali reservoir opened up in front of us, a dazzlingly turquoise mountain lake created by the construction of a hydroelectric dam in the 1980s. The lake provides a spectacular backdrop to the far older fortress of Ananuri, where we stopped to stretch our legs. Within the walls of the fortress are two 17th century churches built in the typical Georgian Orthodox fashion, and there were just enough tourists to sustain a few souvenir stalls selling local crafts, fluffy Turkmen hats and strings of churchkhela, a traditional candy made from nuts and grape must. 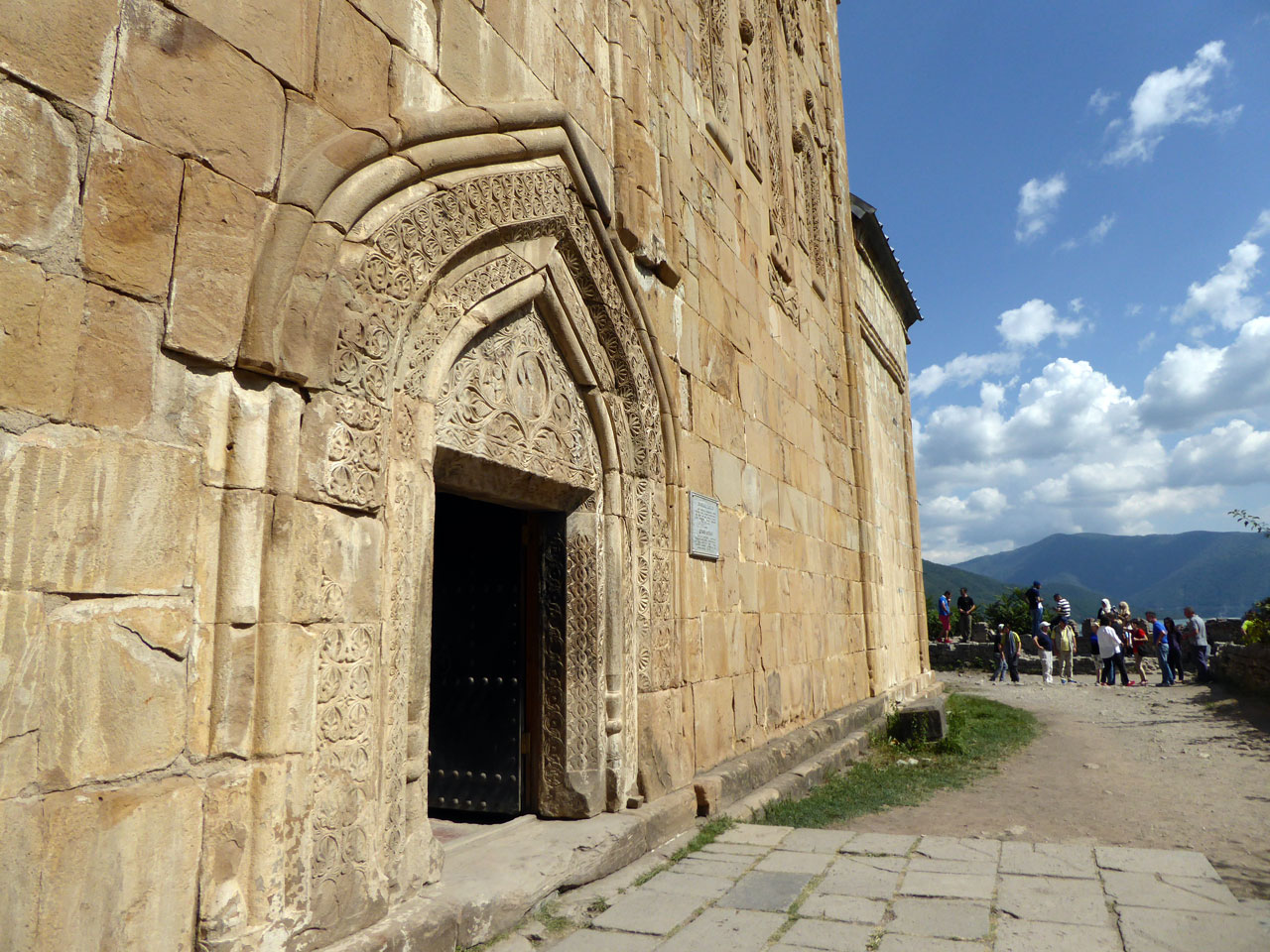 From Ananuri the road grew steeper and narrower, the scenery ever more dramatic, and crystalline mountain streams began to appear beside the road. Our driver's gung ho driving style only seemed to intensify, flying round hairpin bends while sending text messages on his phone, weaving in and out of the huge trucks bound for Russia. 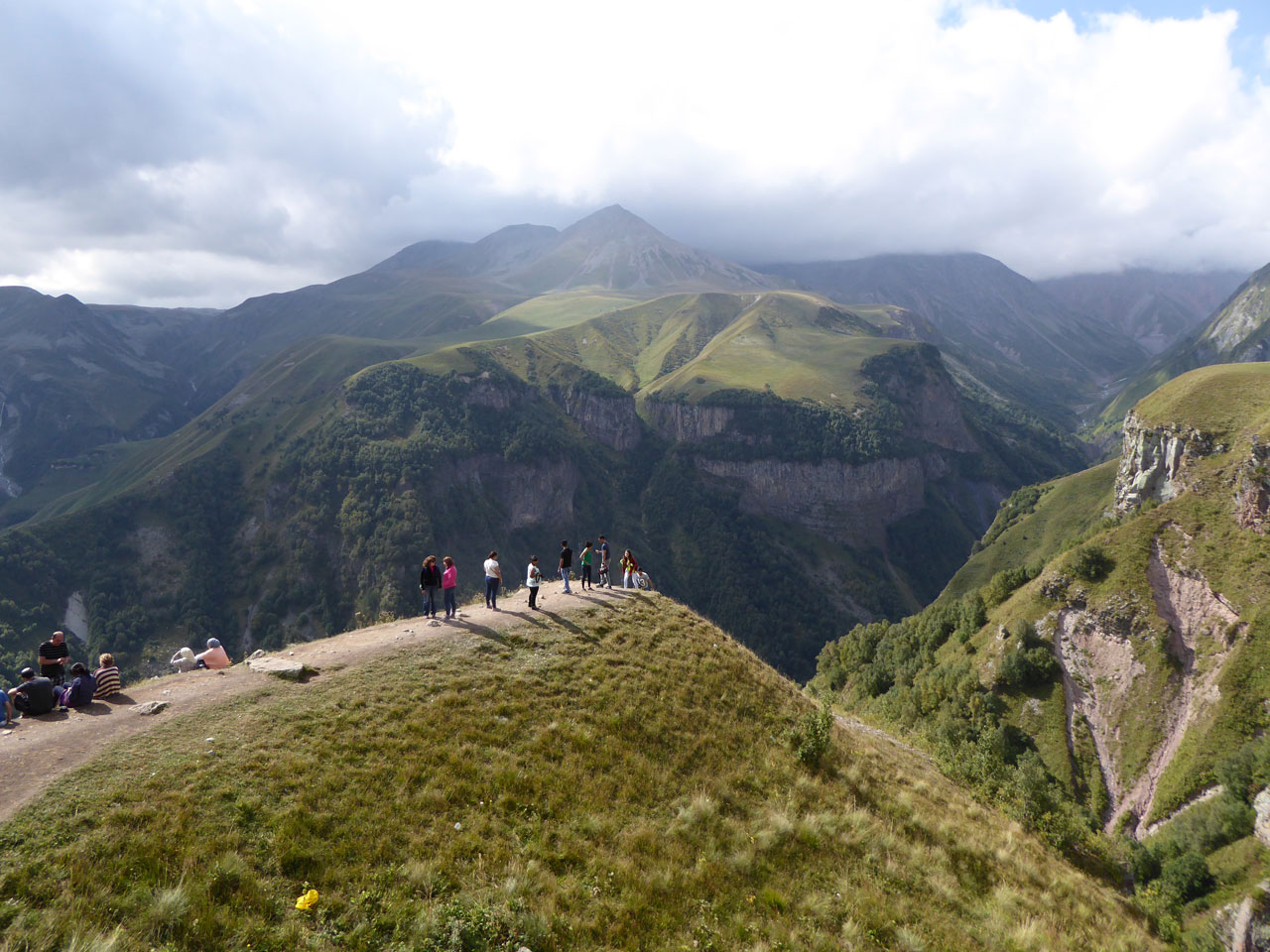 As we approached the town of Gudauri we slalomed up a series of switchbacks a little too quickly, narrowly avoiding being crushed under the wheels of a huge lorry coming the other way. It was a heart-stopping moment, but fairly typical of the way that many Georgians drive on these mountain roads. The scenery around us was a welcome distraction, the soaring peaks of the High Caucasus now closing in around us. Above the treeline the mountains were a smooth and softly textured green, as if covered in moss, crowned by teeth of jagged grey and skimmed by clouds. Gudauri is a ski resort in winter, and the buildings looked almost Alpine, more Tignes than Tbilisi. 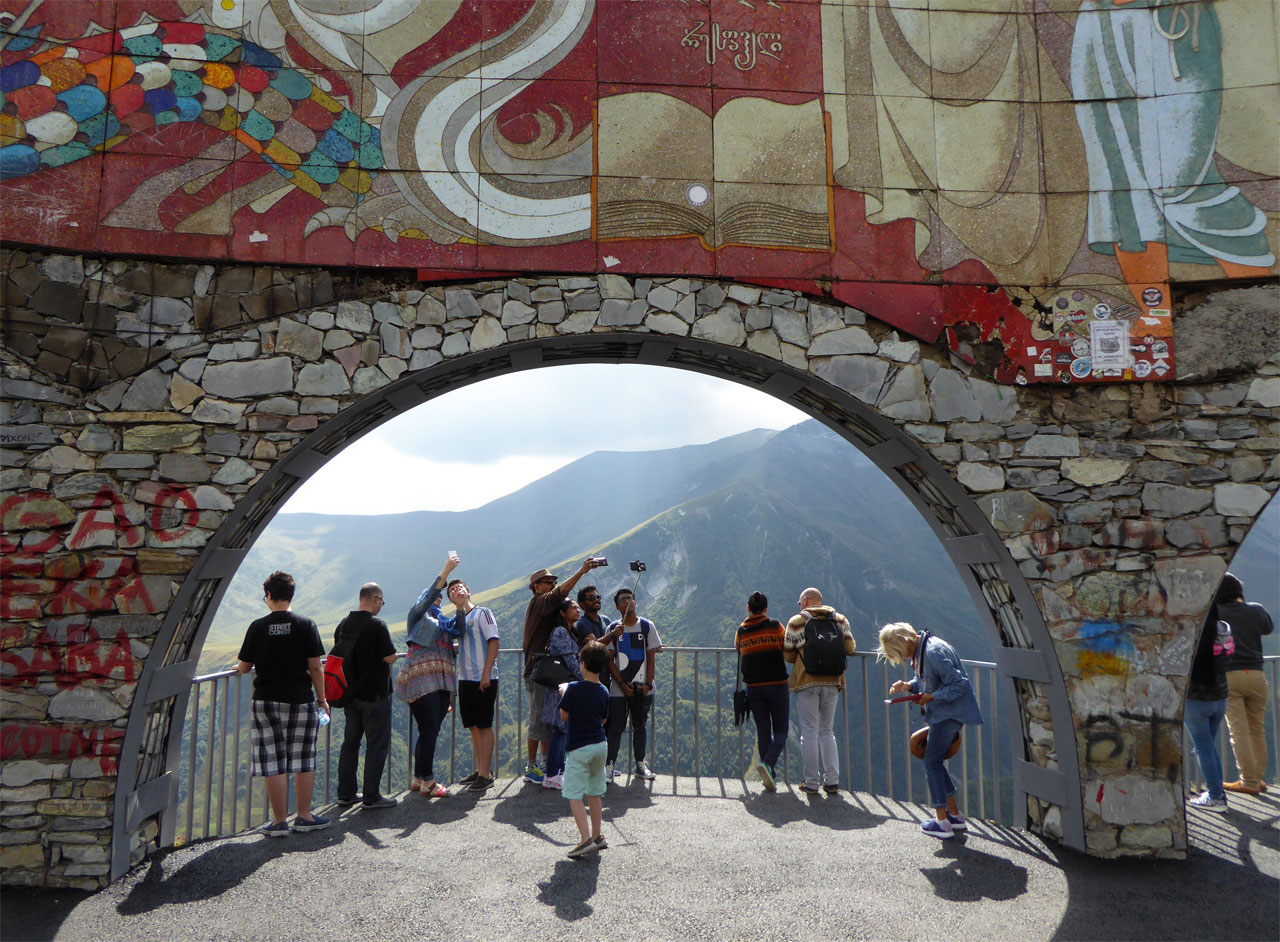 Just past Gudauri we stopped at the Russia-Georgia Friendship Monument, a semi-circular mural and viewing point that looks out across the dramatic abyss of the Devil’s Valley. The monument was built in 1983 to mark 200 years since the signing of the Treaty of Georgievsk, the agreement that established Georgia as a protectorate of the Russian empire. The monument was controversial even during Soviet times, and nowadays the name seems faintly absurd, given the frostiness of Russo-Georgian relations since the 2008 war over South Ossetia. 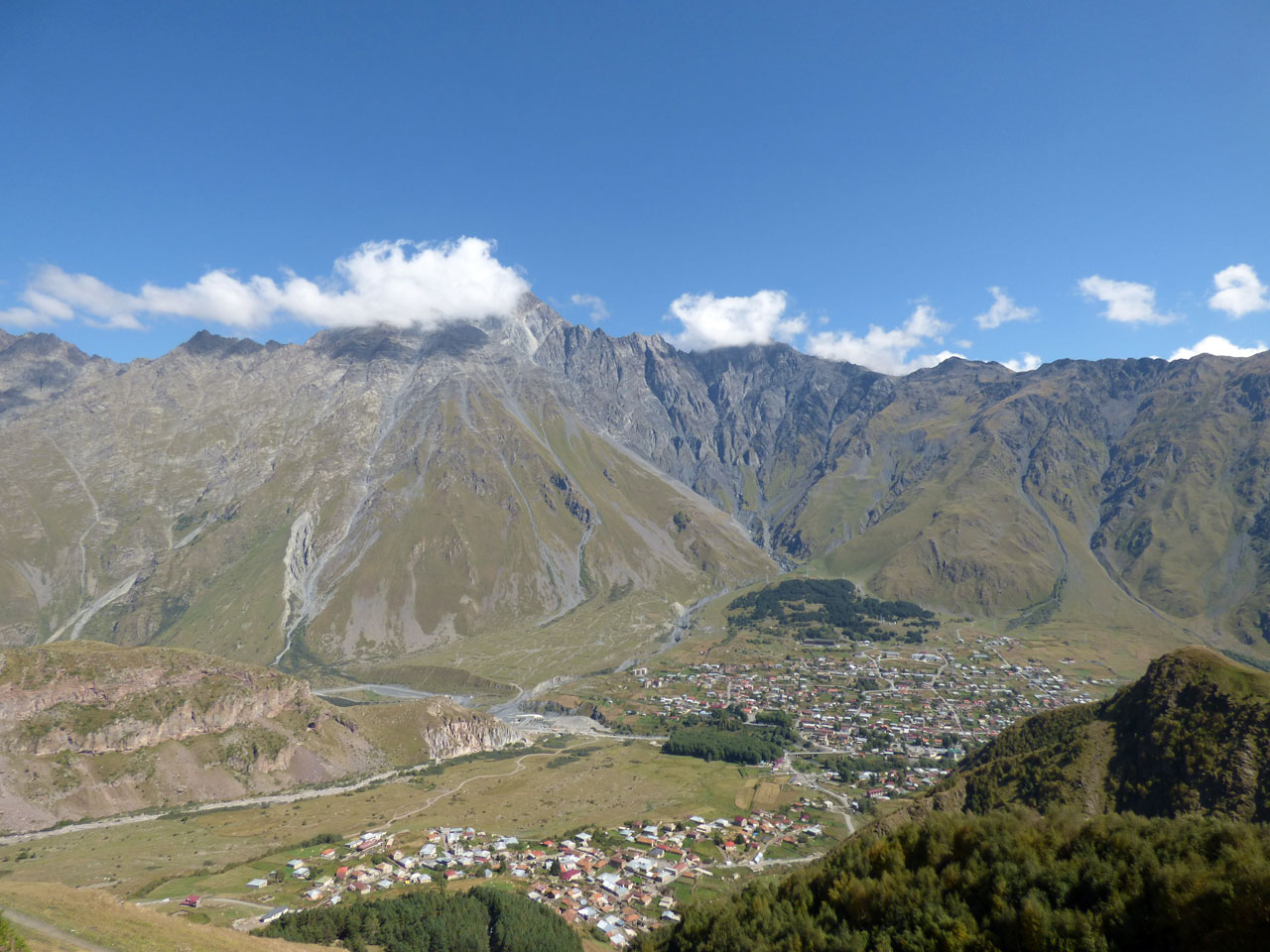 The road topped out at the Jvari Pass, just shy of two and a half kilometres above sea level, before slowly descending to our destination, the village of Stepantsminda. Still commonly known by its old name, Kazbegi, the village is just ten miles from the Russian border, at the foot of the towering Mount Kazbek. From our hotel on the east side of the valley we had a stunning view of the mountain, its summit veiled by thick cloud, and of the hilltop Tsminda Sameba church, Kazbegi’s most iconic sight. 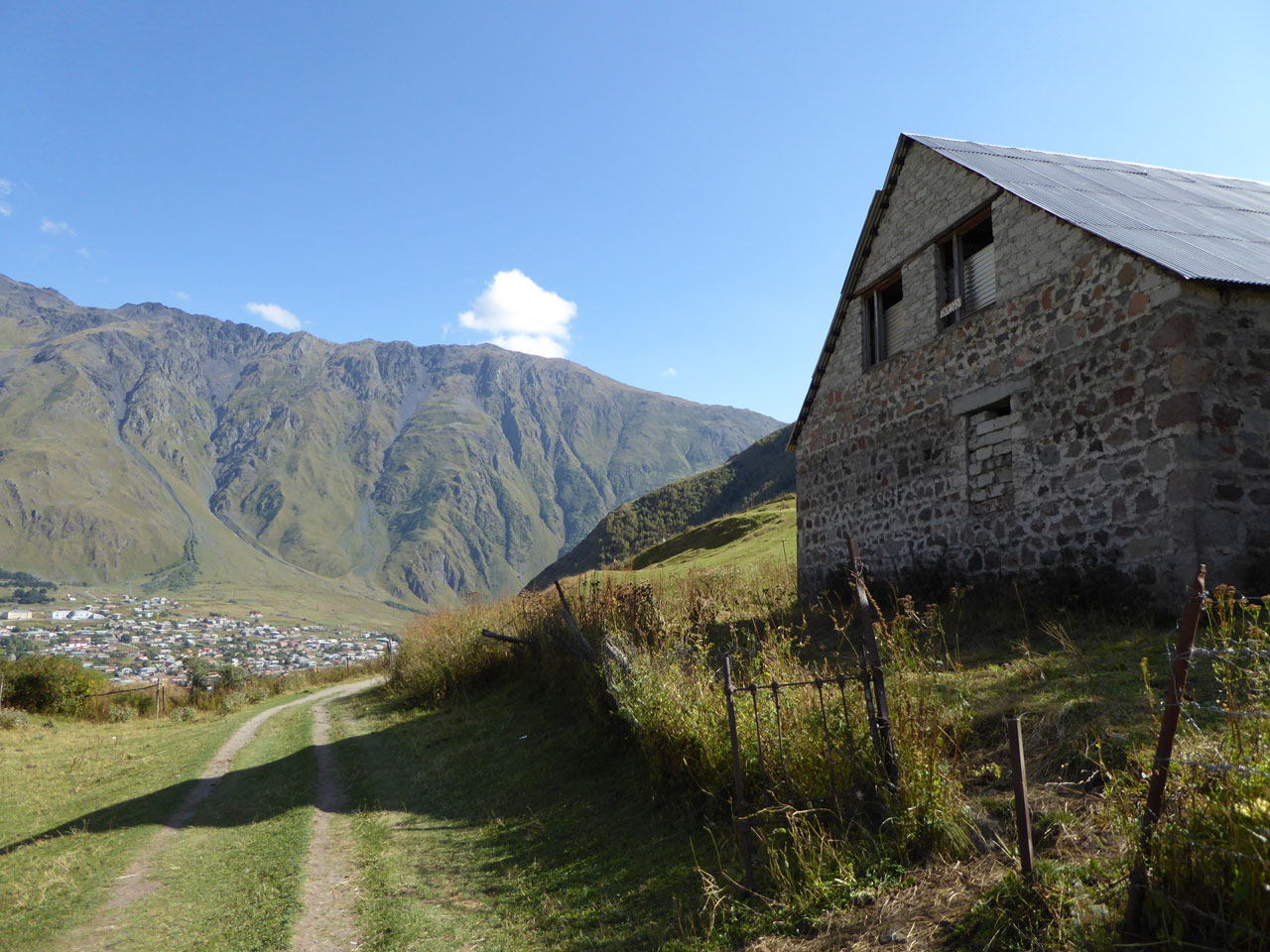 This church, built in the 14th century, is remarkable for both its picturesque setting and the unimaginable effort involved in building it in such an inaccessible location. On our first morning in Kazbegi we decided to take a closer look, and set off across the valley. Stepantsminda itself is nothing special, a slightly shabby place with the feel of a frontier town. Signs for Vladikavkaz and the steady stream of trucks rumbling down the high street were a reminder of our proximity to Russia. 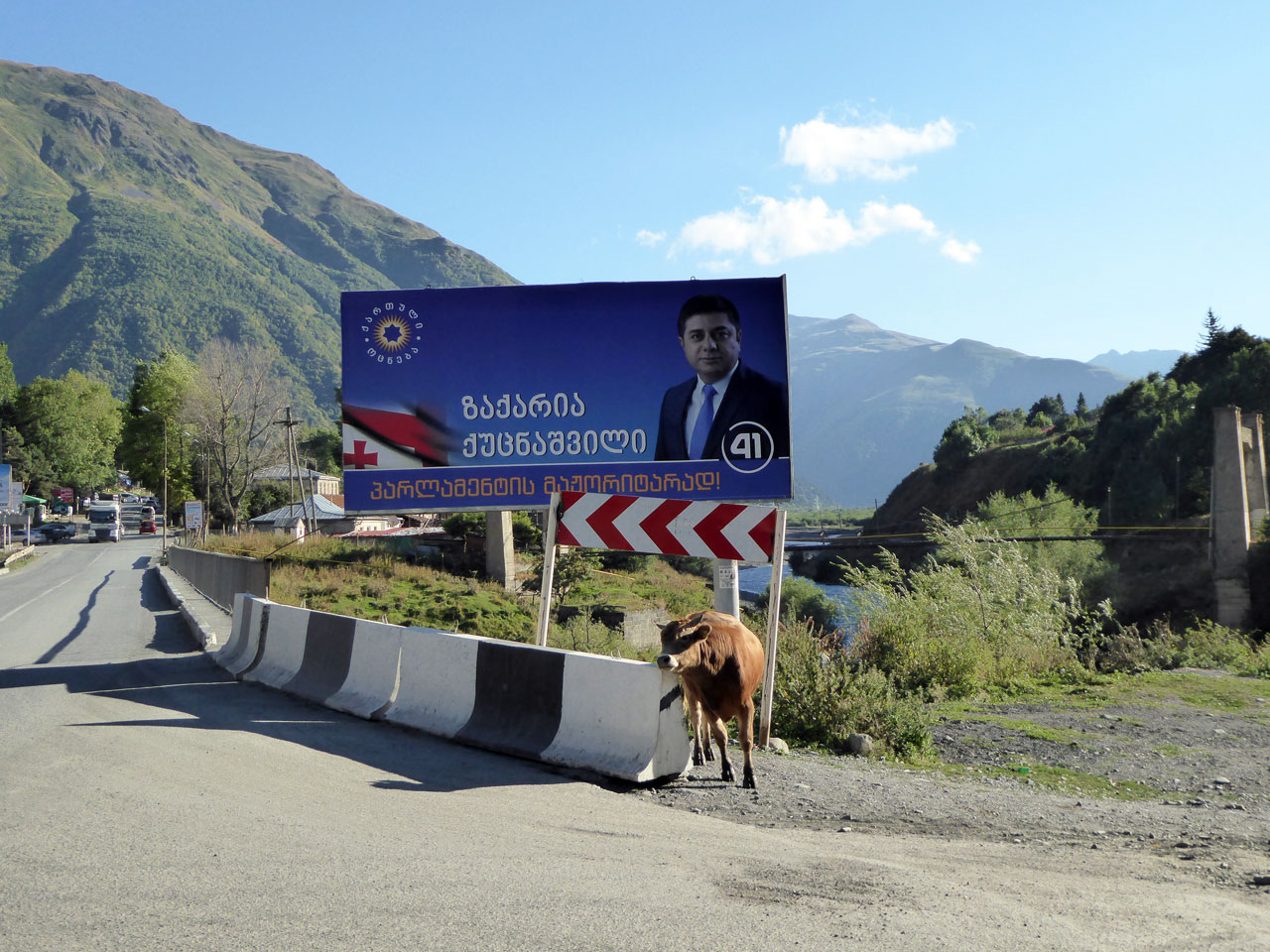 We crossed a narrow bridge over the gushing Terek river, where a lethargic cow rubbed itself up against a wall to relieve an itch, while another stood in the middle of the road watching on. A dusty track curved off from the main road towards the adjacent village of Gergeti, which seemed more traditional and more rural than Stepantsminda. The roads were narrower, the stone houses more primitive, and the countryside seemed to spill into the streets. 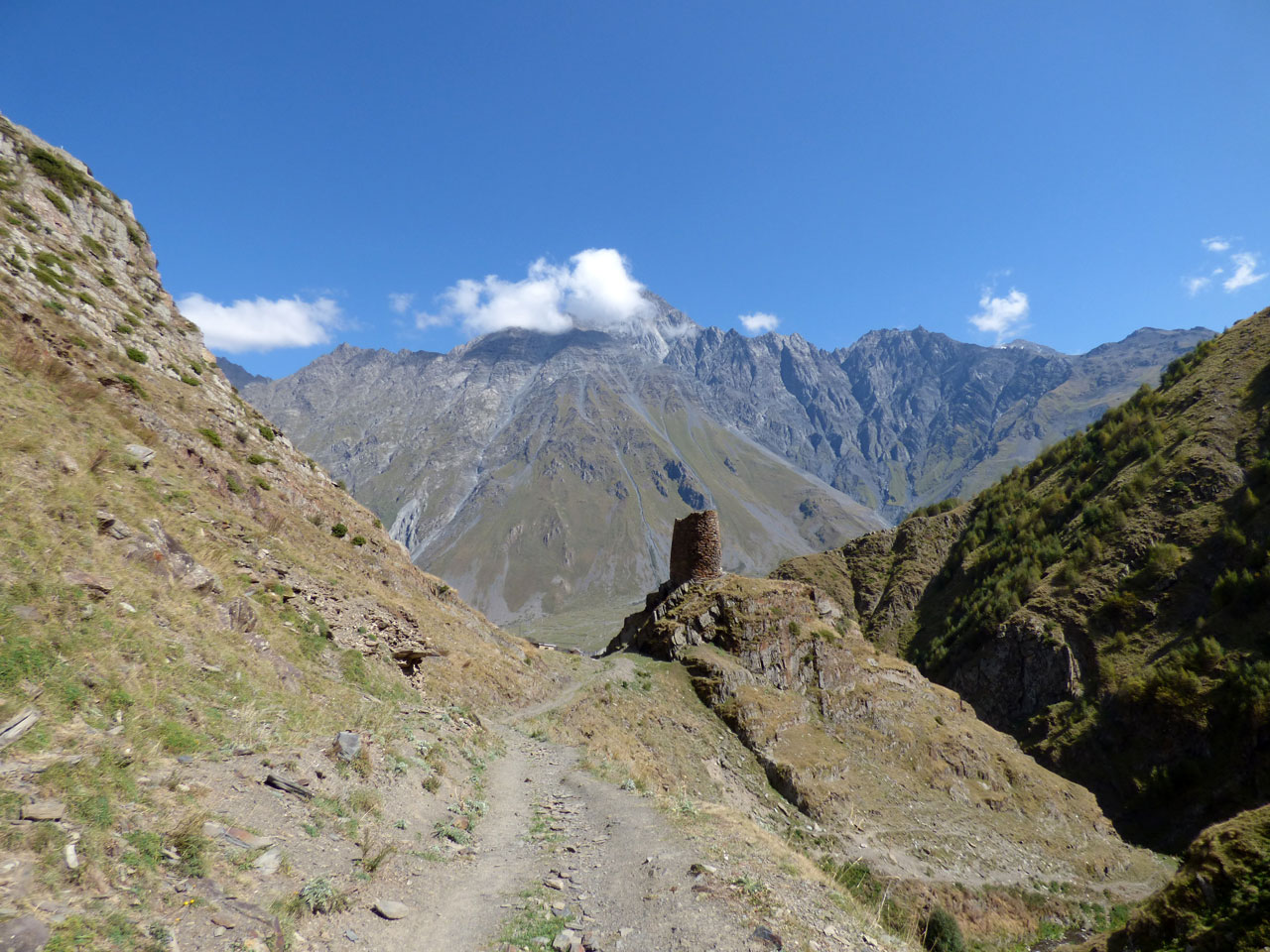 There were several different paths to the church, but we chose to follow a stream on the south side of the hill, up a steep slope past a ruined stone tower. Apart from the stream and the occasional fellow walker crunching along the stone path, there was barely a sound up on the hillside. The air was crisp and fresh, and the sun was warm on the back of my neck. We stopped a few times to catch our breath, and to sit and just take in our surroundings. 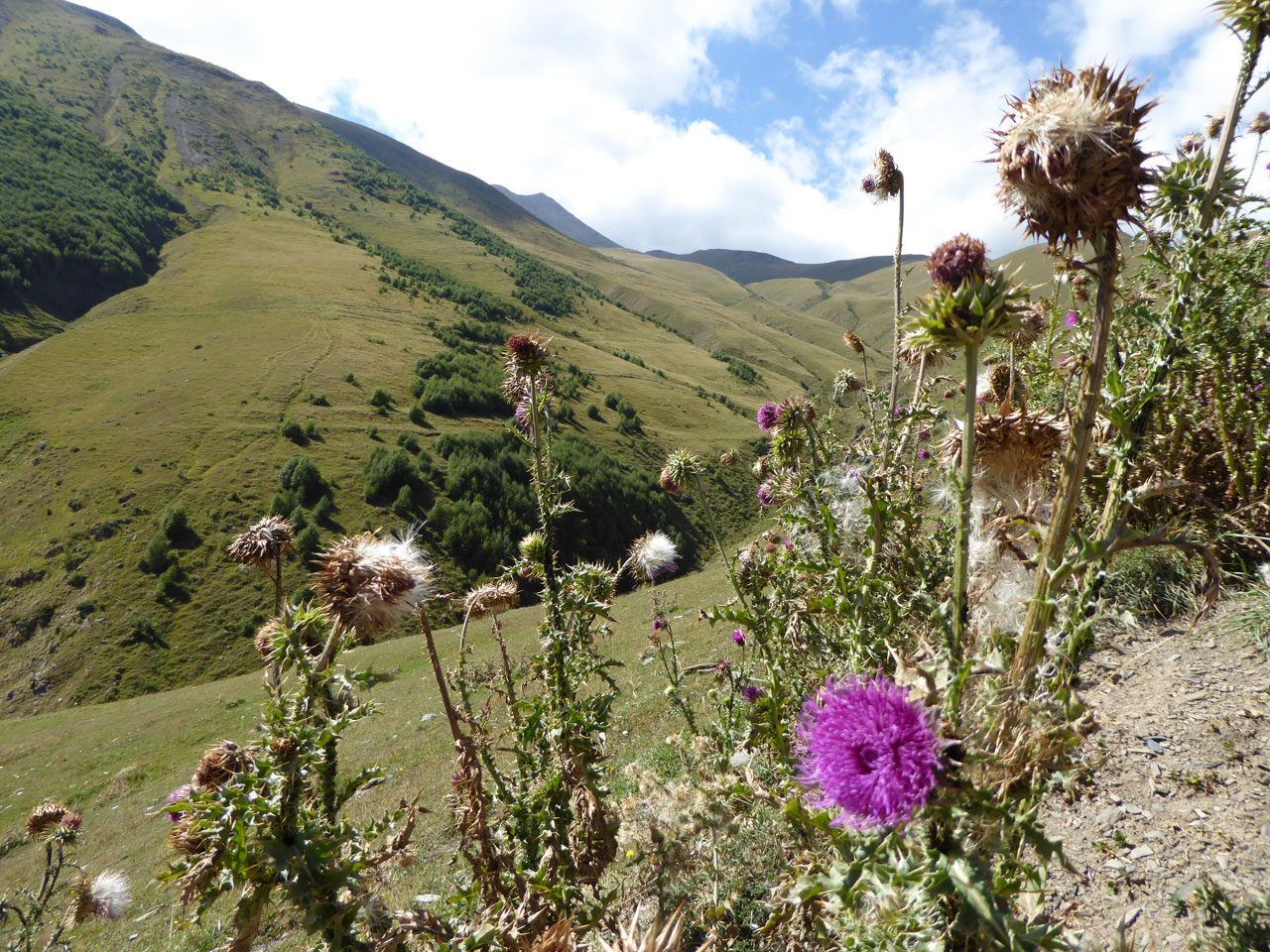 The final push to the top led us up a steep grassy slope, and suddenly, jarringly, we were amongst a throng of people snapping selfies, posing self-consciously in front of the dramatic mountain vistas and the little church. It quickly became clear that most people are ferried up to the church by car or 4×4, cutting out the ascent altogether. Understandable perhaps, given the effort required to reach the church on foot, but I felt like all these people had missed out on the best bit of the journey. 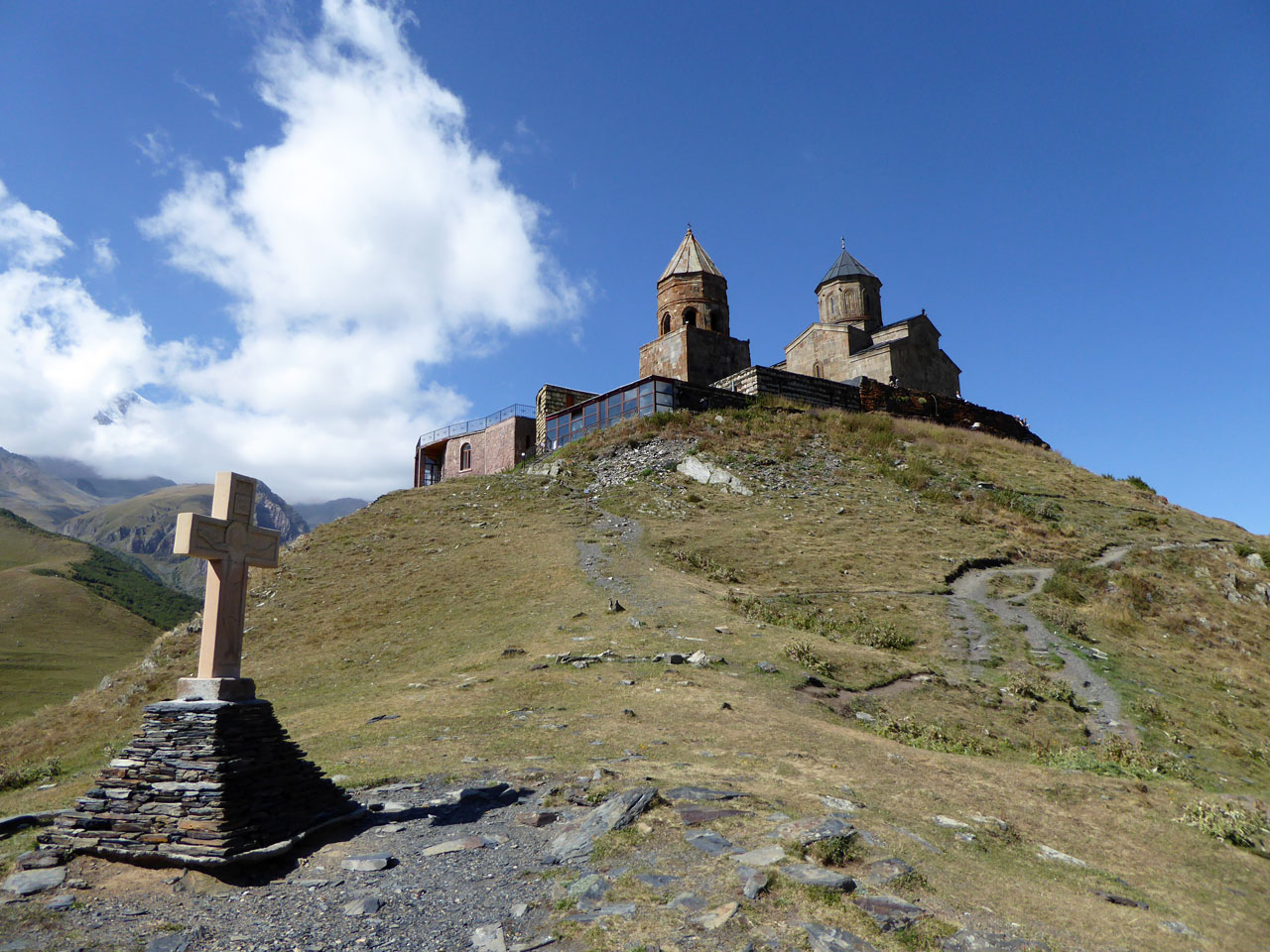 We didn't linger at the church, and descended via a different route, scrambling down the east-facing slope and then along the dusty, zig-zagging road back down to Gergeti. As we walked back up through Stepantsminda to our hotel, past a couple of red-faced old men in their Sunday best reeking of vodka, we looked back across the valley and saw that the clouds had finally cleared from Mount Kazbek. For the first and only time during our stay the snowy peak was fully visible, a sight that many visitors miss out on altogether. 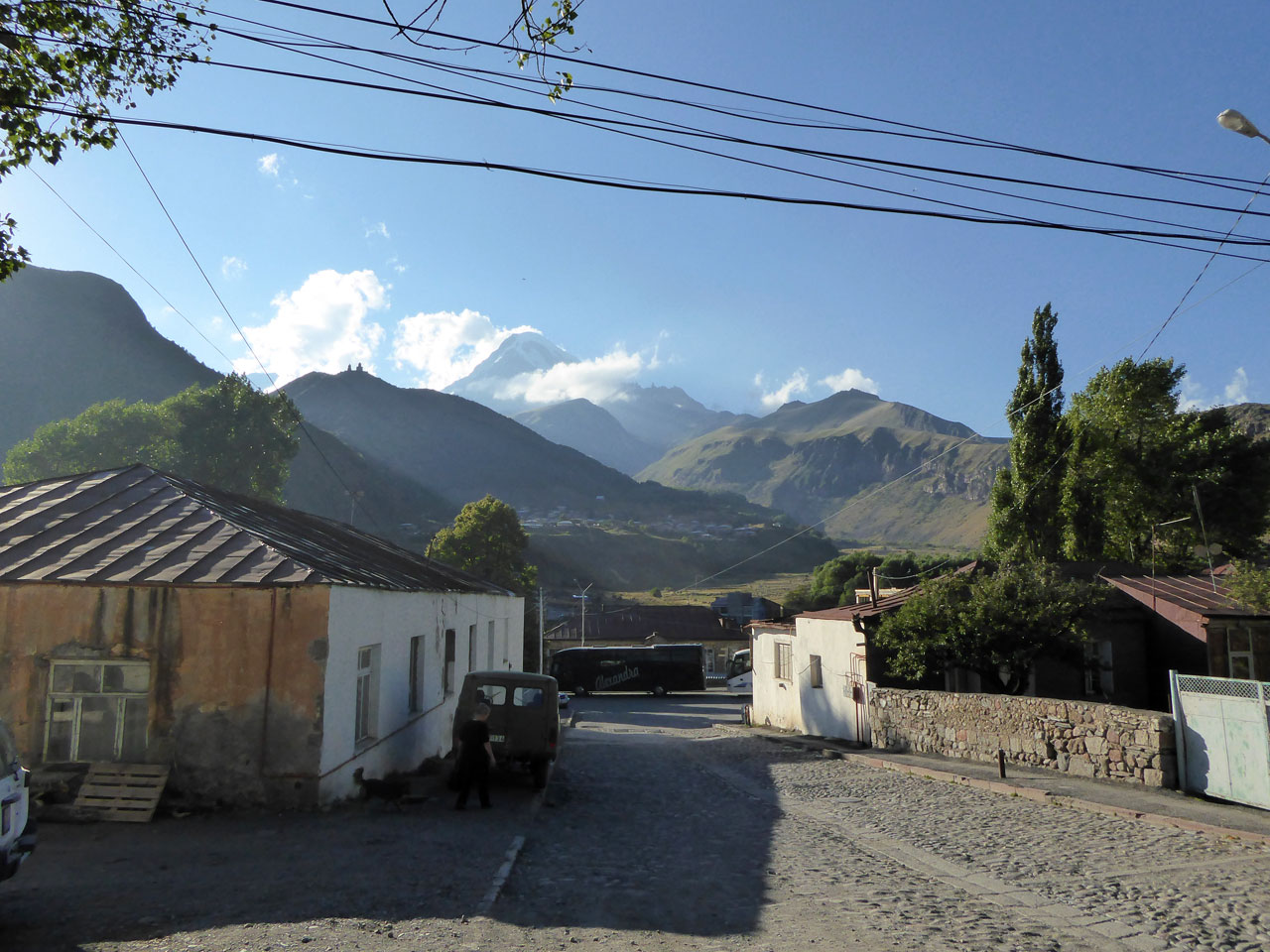 On our final day in the mountains we arranged for a driver to take us to the Truso Valley, which snakes off the Georgian Military Highway to the south of Kazbegi. After turning off the main road we bounced along a rocky track past the abandoned settlement of Kvemo-Okrokana, and followed a Georgian army truck into the valley. 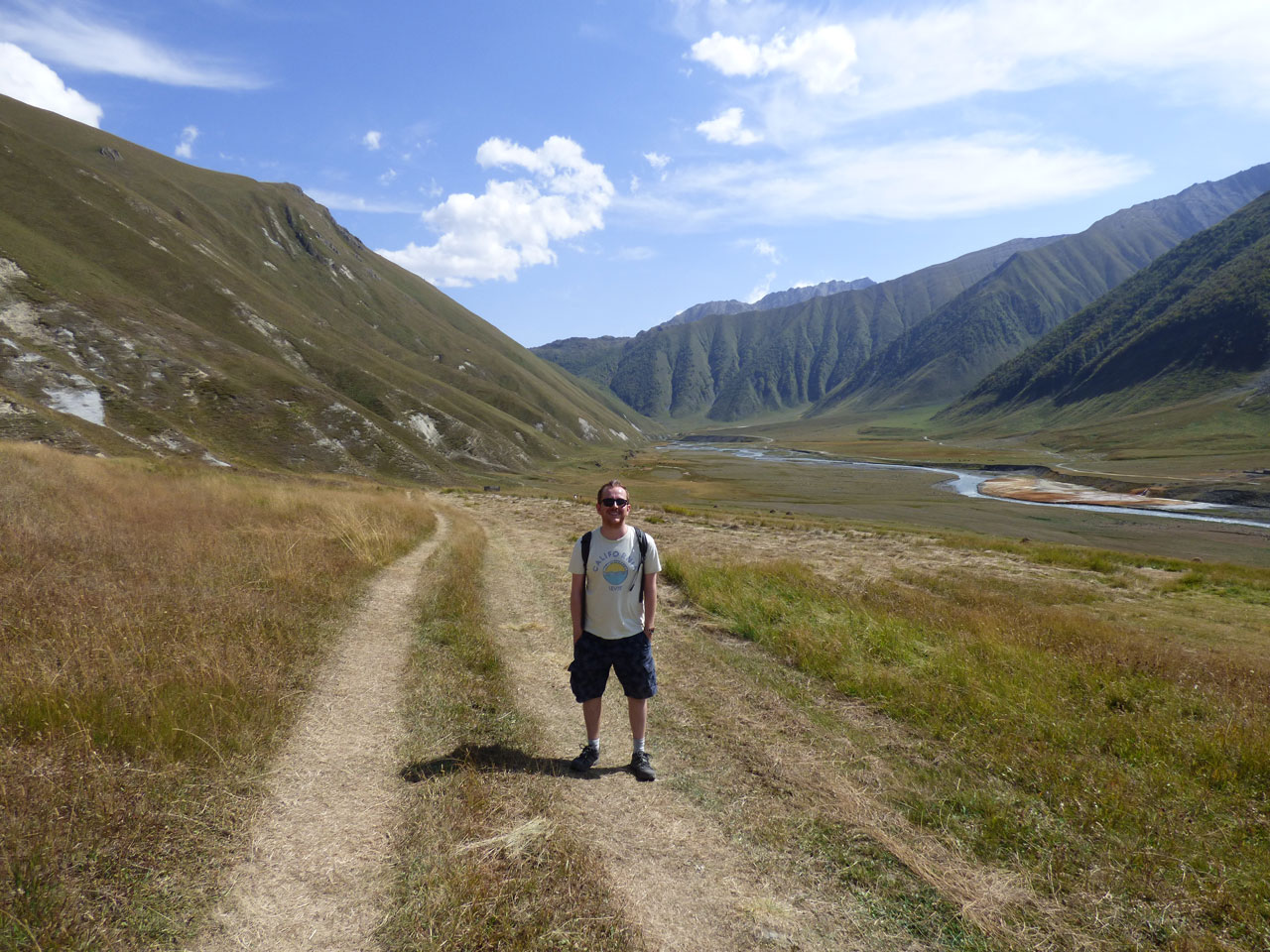 As the walls of the valley began to close in, the road became ever more treacherous. Our driver guided us skilfully over huge potholes and fissures in the narrow road, concentrating so intently that he didn’t even pick up his phone when it started ringing, highly unusual behaviour for a Georgian taxi driver. Eventually the valley flattened out again into a gently undulating landscape of green grass and weird yellow mineral deposits. We forded the river and came to a halt at the village of Ketrisi, abandoned except for one stone house where some washing hung in the garden. Here our driver told us he would wait for a couple of hours while we hiked to the other end of the valley and back. 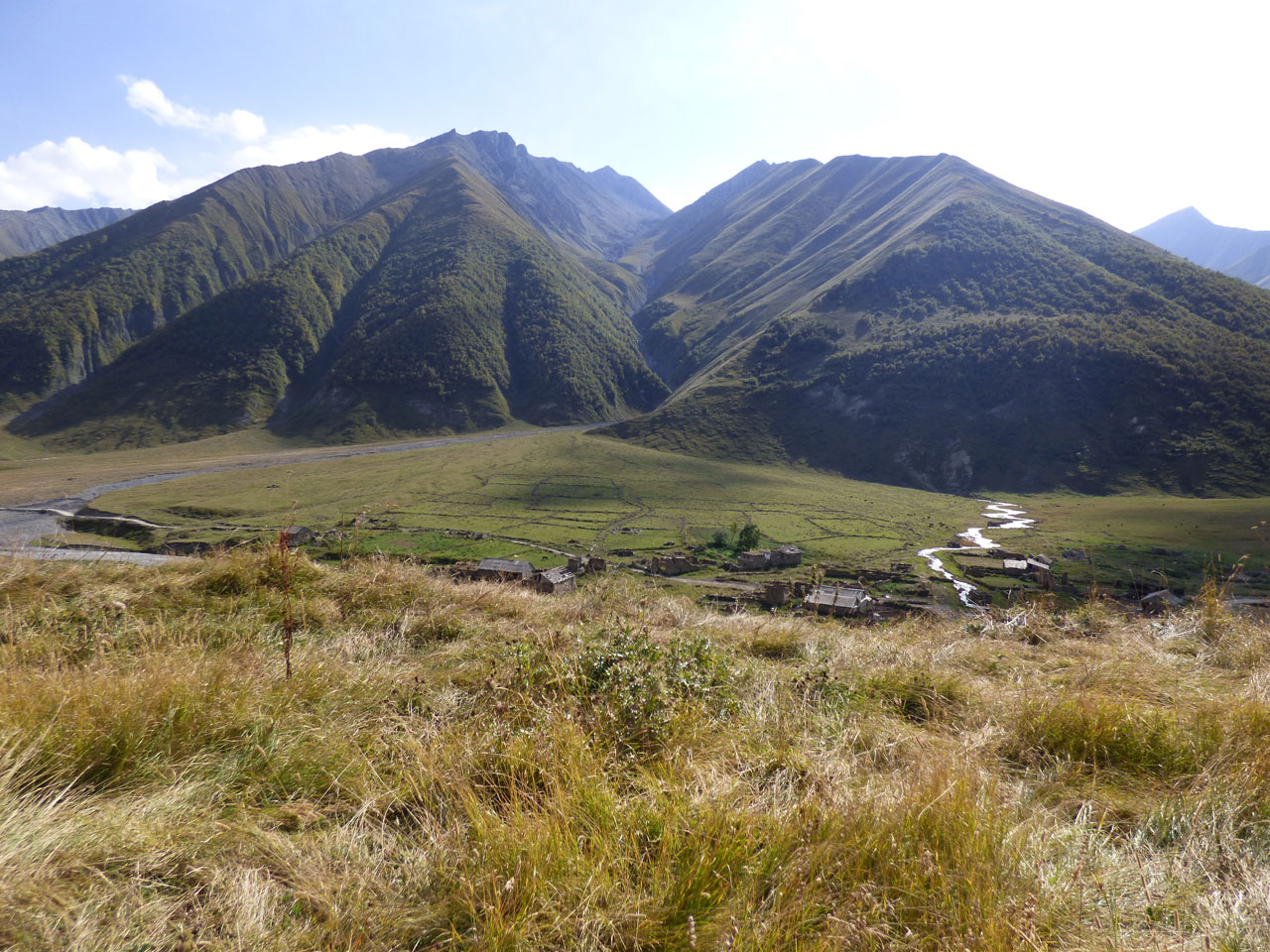 The stillness and tranquility was even more palpable here, though tinged with a sense of sadness and loss. The villages in the valley were mostly abandoned in the aftermath of the Ossetian war, and there was no one here apart from a few farm workers out in the fields, the Georgian soldiers we’d seen earlier, and a handful of other hikers. A few hay bales were dotted around the fields, and herds of cows and sheep mooched slowly along the valley, along with the occasional donkey. As we tramped through the longish grass we disturbed big green grasshoppers and little yellow butterflies, and we spotted lizards and frogs on the banks of the streams that fed the river. Far overhead a couple of big birds circled; eagles, perhaps. 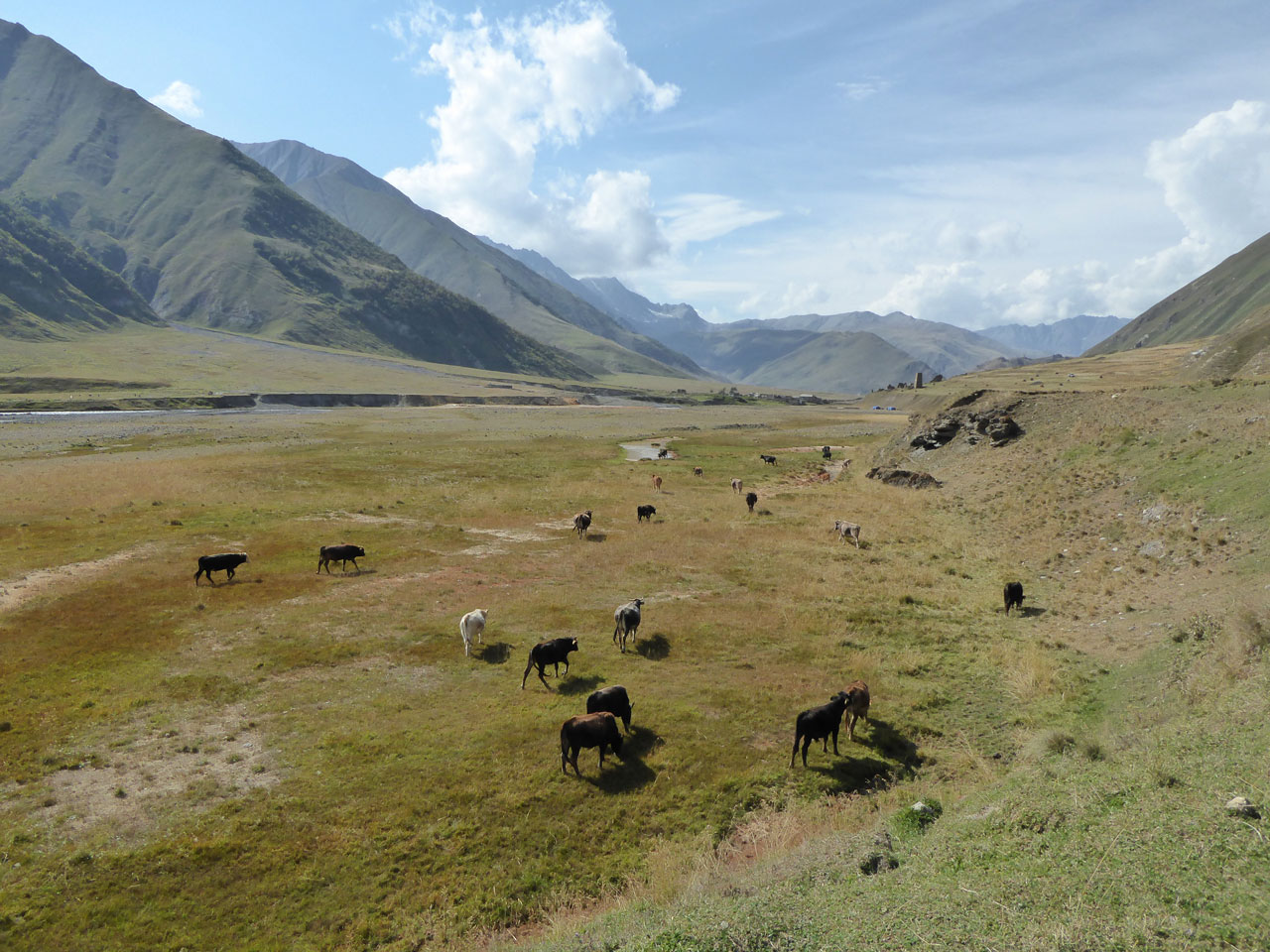 We met a shepherd with a weathered face, a toothy grin and a wooden stick, who tried his best to communicate with us.

“Rossiya!” he said, pointing to the north, one of the few things I understood.

It was one of those frustrating moments when I wished I could communicate beyond just nodding and grinning, but after an awkward few moments of mutual incomprehension we bid him farewell and carried on our walk. We reached the strange little Abano lake, where a constant stream of carbon dioxide bubbles up to the surface. Rusty red streams rich in minerals ran from the lake down to the river, like rivers of blood staining the landscape. Nearer the river there was a sulphurous stink, and yellow mixed in with the red. 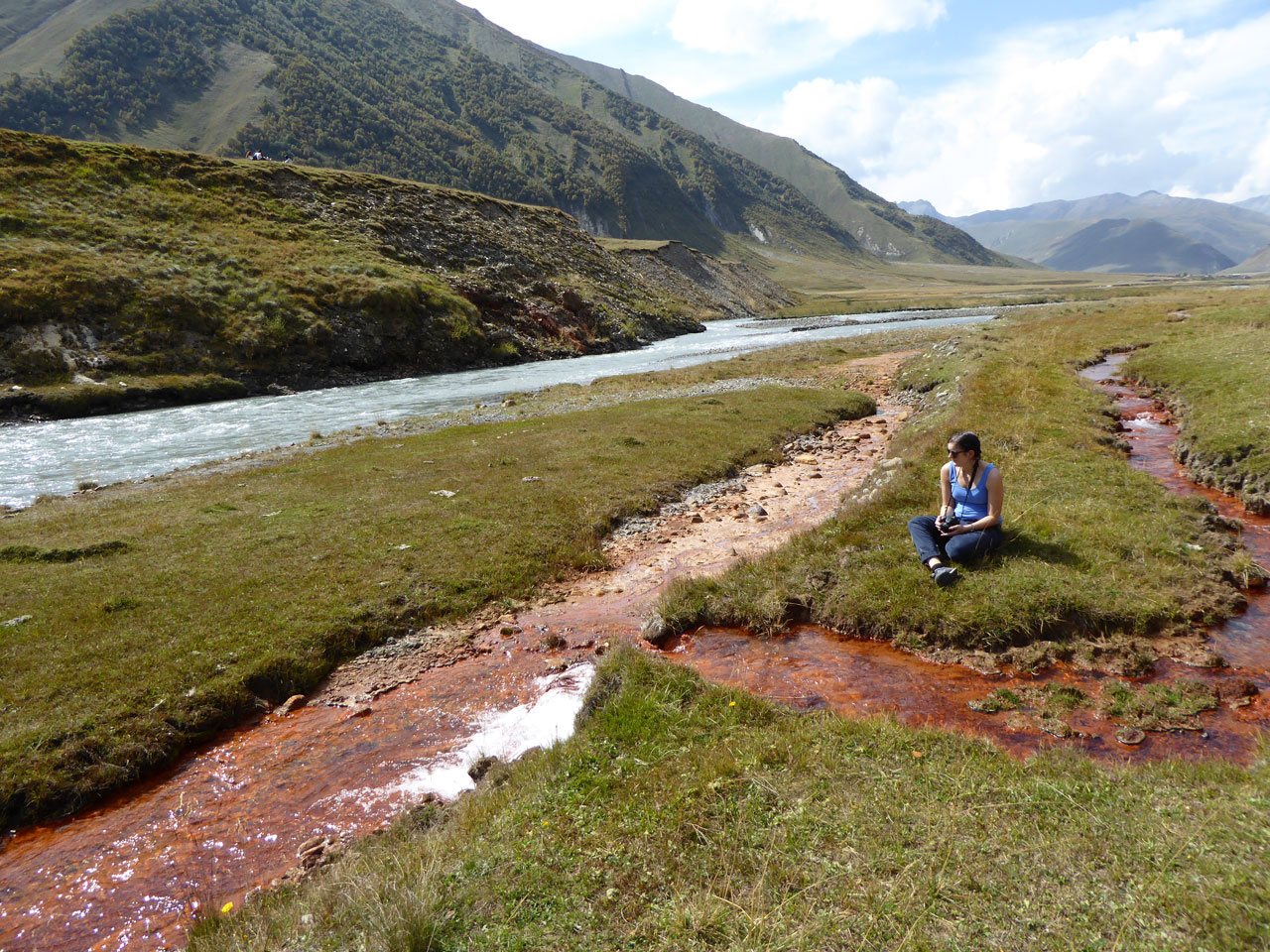 The lake was as far as we could go on this side of the river, so we meandered back, past the ruin of a giant tower, and over the bridge back to Ketrisi, where our driver was waiting. I have no idea what he did to pass the time, in this ghostly village where cows wandered amongst collapsing houses. 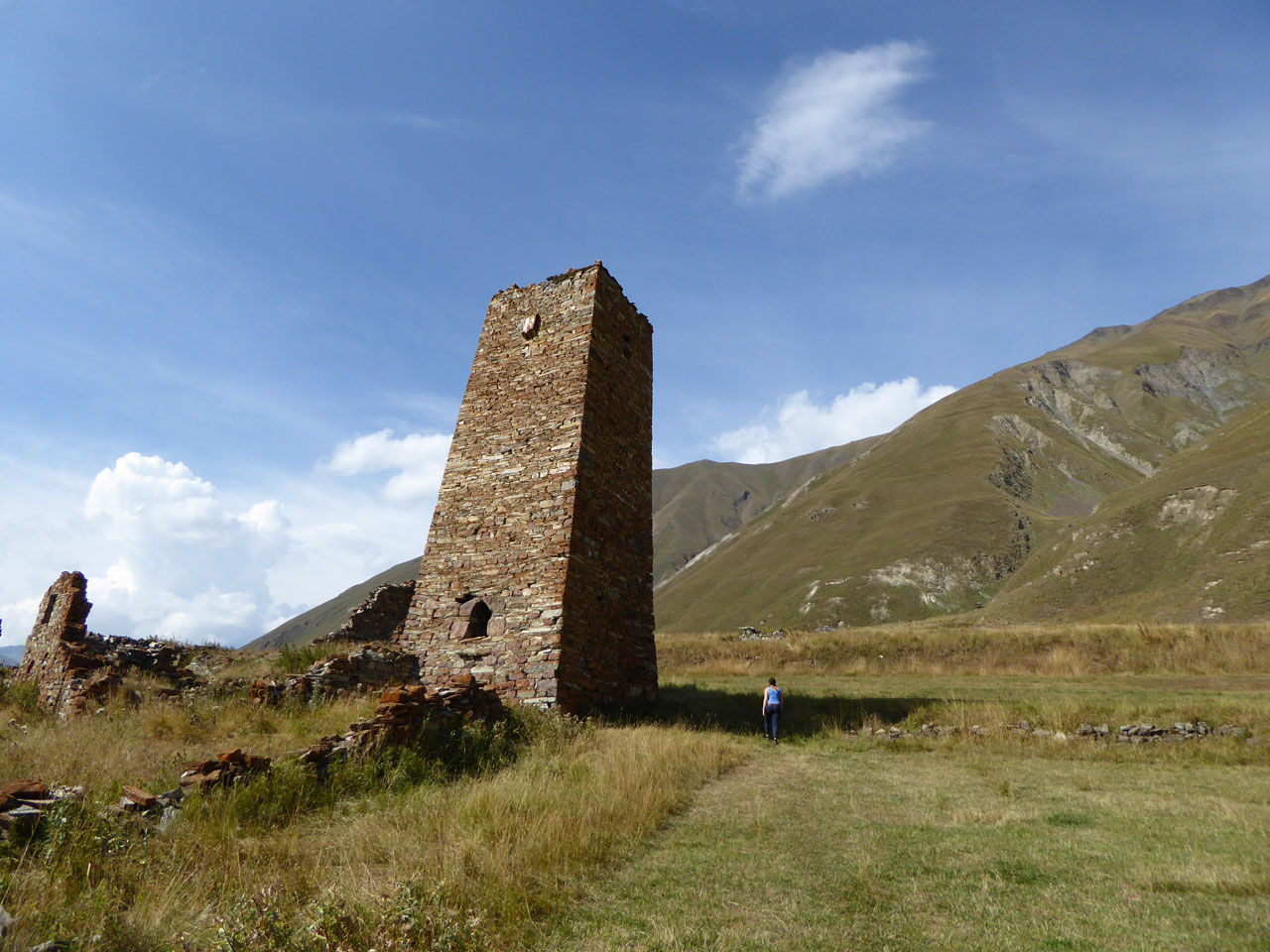 We left the valley by the same way we’d arrived, down the narrow track alongside the gorge, then back out onto the Georgian Military Highway. Ahead of us loomed the mountains again, and that well-trodden road to Russia.

Imagine travelling to the little Austrian town of Braunau, which sits by the river Inn on the German border, and arriving in the main square to find people smiling and posing for photos

Where does Europe end and Asia begin? If you look at a map, the idea that Europe and Asia are separate continents doesn’t really make sense. It’s always been a hazily

Not Here
—
Kazbegi & The Georgian Military Highway
Share this