The Capital Ring Walk is a 78-mile long route around London that connects up many of the capital’s lesser known sights, broken up into 15 smaller sections. This post follows on from my previous account of Sections 12 and 13, running from Highgate to Hackney Wick.

We found ourselves back at Hackney Wick on a dismal afternoon, one of those monochromatic London days where everything is smeared with grey. It’s an odd part of town, where several different types of East London seem to rub up against each other: the gritty, bleak industrial remnants, the hipsterish enclaves along the canal, the thrusting regeneration of the Olympic site that still litters the area with vast building sites, and the ‘old Stratford’ clinging on. 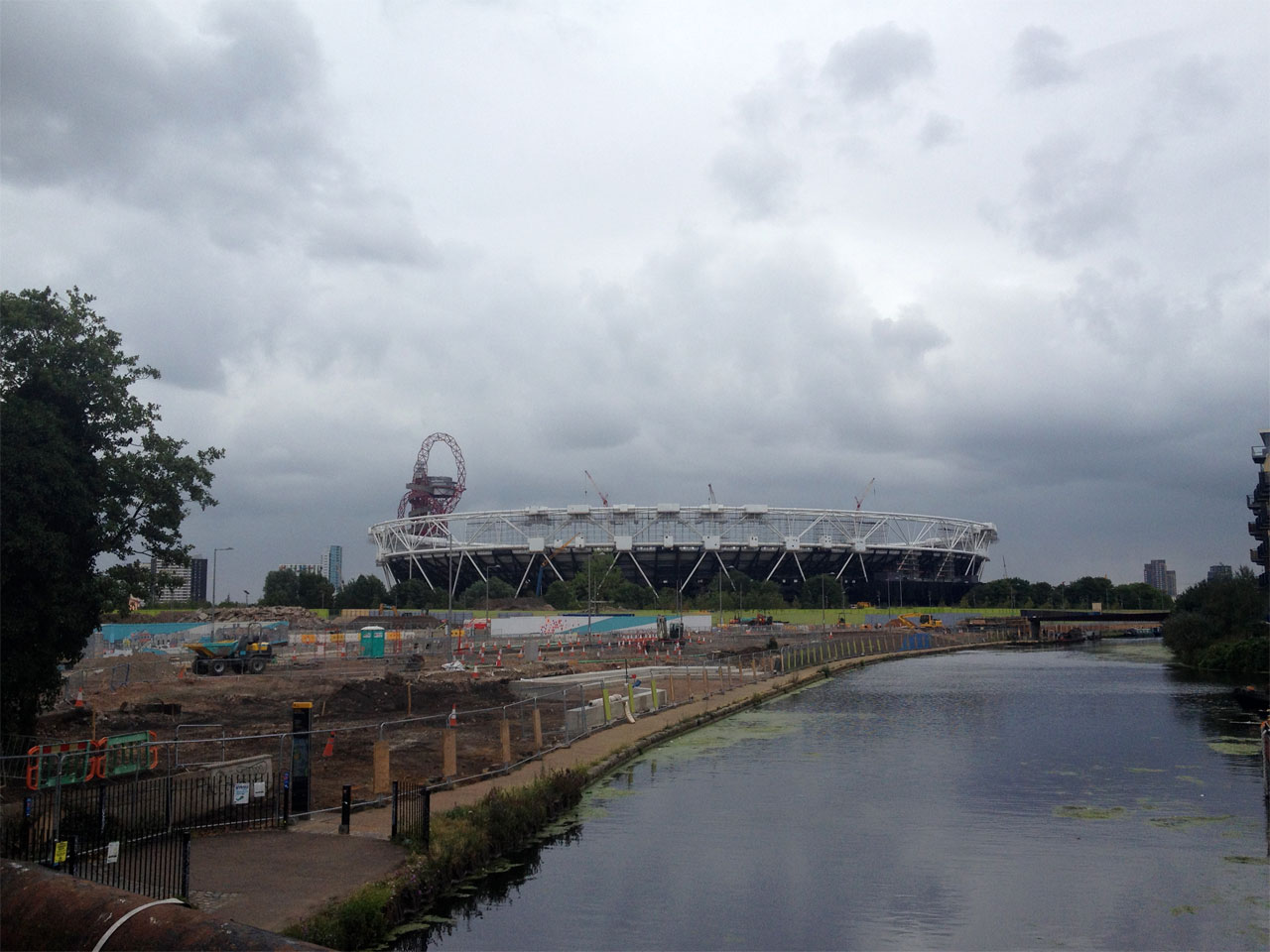 Just to the west of the Olympic Stadium the River Lee Navigation meets up again with its older sister, the River Lea. Here we crossed a bridge and made our way up a slope to the Greenway, which makes up the majority of this section of the Capital Ring. The Greenway is a pretty impressive piece of euphemistic re-branding, since it is basically a 6-mile-long grassy embankment built over a Victorian sewage pipe, carrying vast quantities of effluent from North London down to the treatment works at Beckton. Every so often along the path a vent rises up from the pipe, and, as you would expect, it doesn’t smell good. This part of the walk was already pretty bleak, and the heaving stench of shit didn’t help.

There were still surprises along the way, however, such as the Abbey Mills pumping station. Nowadays it’s hard to imagine a local authority building anything other than an functional grey bunker for the purposes of siphoning London’s poo out to sea, but Abbey Mills is a product of the Victorian era, when even something as mundane as a sewage pumping station was deemed worthy of extravagant, Gothic architecture. It was an impressive and incongruous sight, a rare highlight during a fairly monotonous few miles of walking. 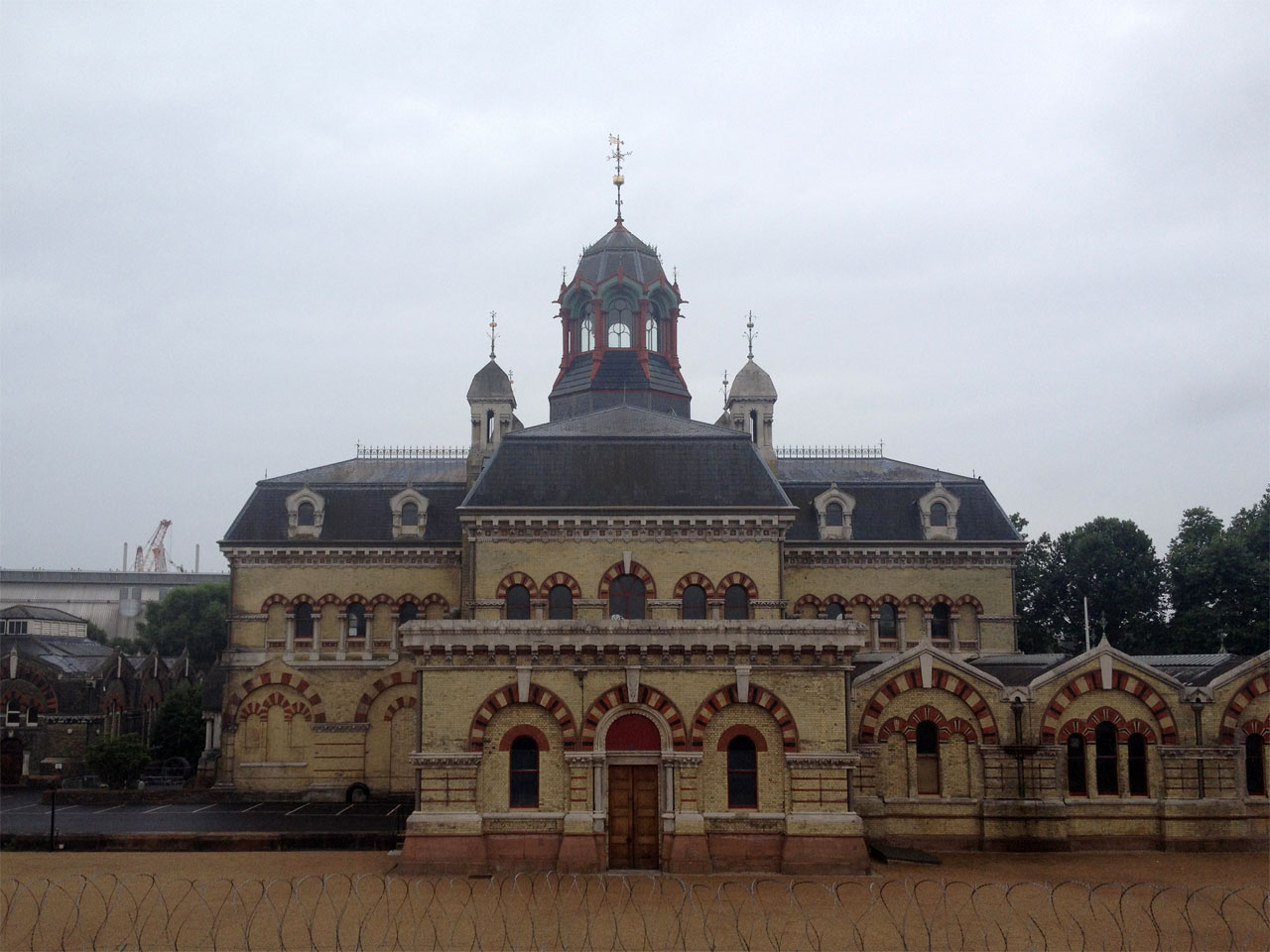 Eventually we left the Greenway, and I think we were both glad of the change of scenery, with the route taking us down a residential street as far as a footbridge straddling the A13. One of the surprising things about the Greenway was how quiet it was, almost rural in places, with only a dull rumble in the distance. As we crossed the bridge it became apparent where that rumble had been coming from, with six lanes of traffic thundering along the road underneath us. 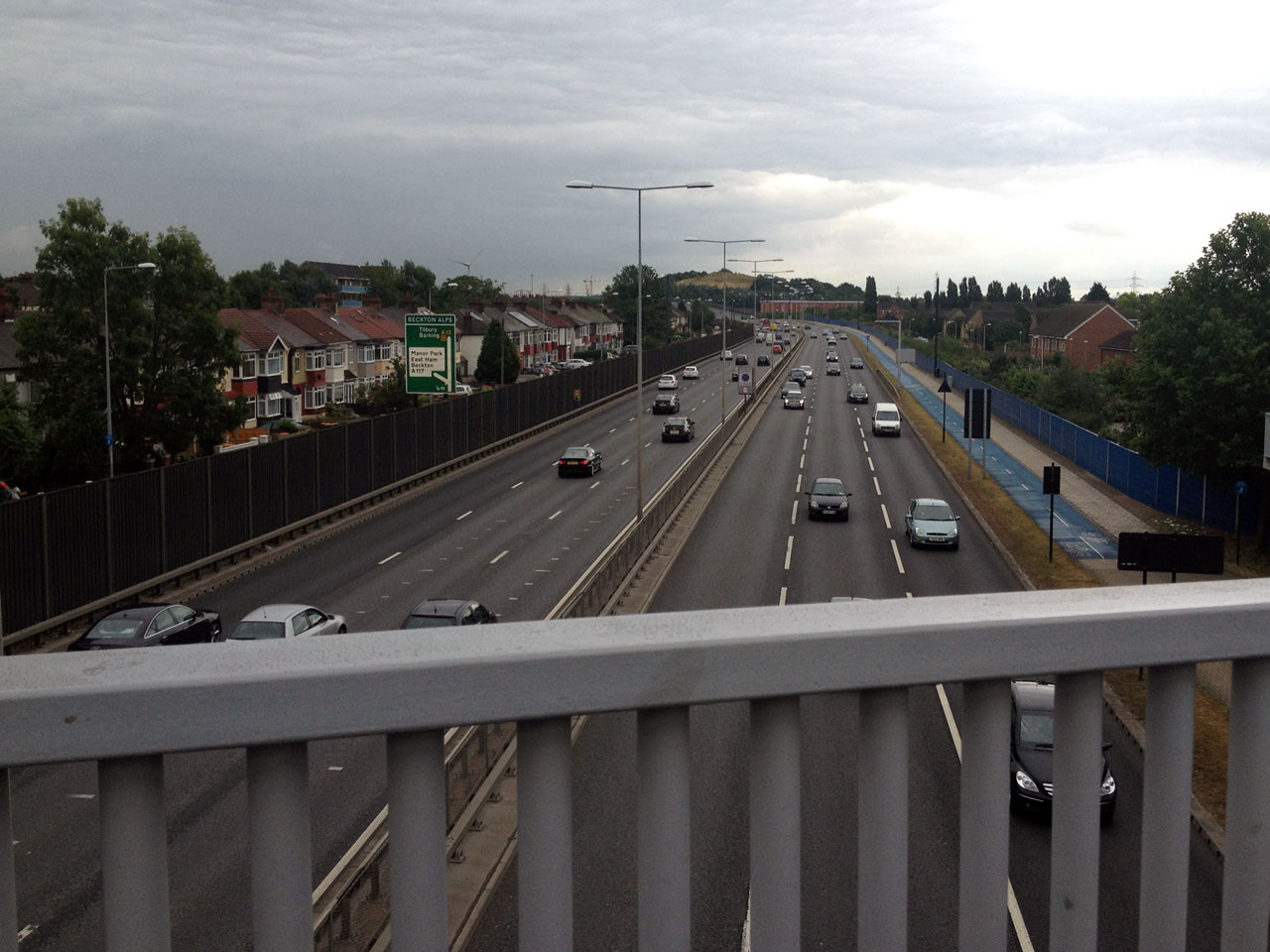 On the other side we reached Beckton District Park, a large yet faintly oppressive green space marred by towering pylons. The park was mostly empty, the stillness only disturbed by a kid hurtling up and down on a motorbike with an air of menace. We hurried on our way, emerging on the south side of the park, and we walked down to Royal Albert DLR station, where this section ends.

We returned to Beckton a couple of weeks later, on a summery day that went some way to imbuing the more desolate sections with a little humanity. We crossed New Beckton Park, where a lone horse galloped around its paddock, then wandered through Cyprus DLR station, an unusual circular construction that you could imagine doubling up as a missile silo, or perhaps a hangar for a UFO. Straight ahead was the University of East London campus, which ends abruptly at the gleaming waterfront of the Royal Albert Dock. I guess during the week, in term time, this area is probably bustling with students, but when we passed through on a balmy Saturday afternoon in July the place was virtually deserted. The Docklands area often seems eerily post-apocalyptic at the weekend, and here was no different. Across the water we could see planes taxiing along the runway at City Airport, but they seemed somehow distant and alien, part of a different city entirely. 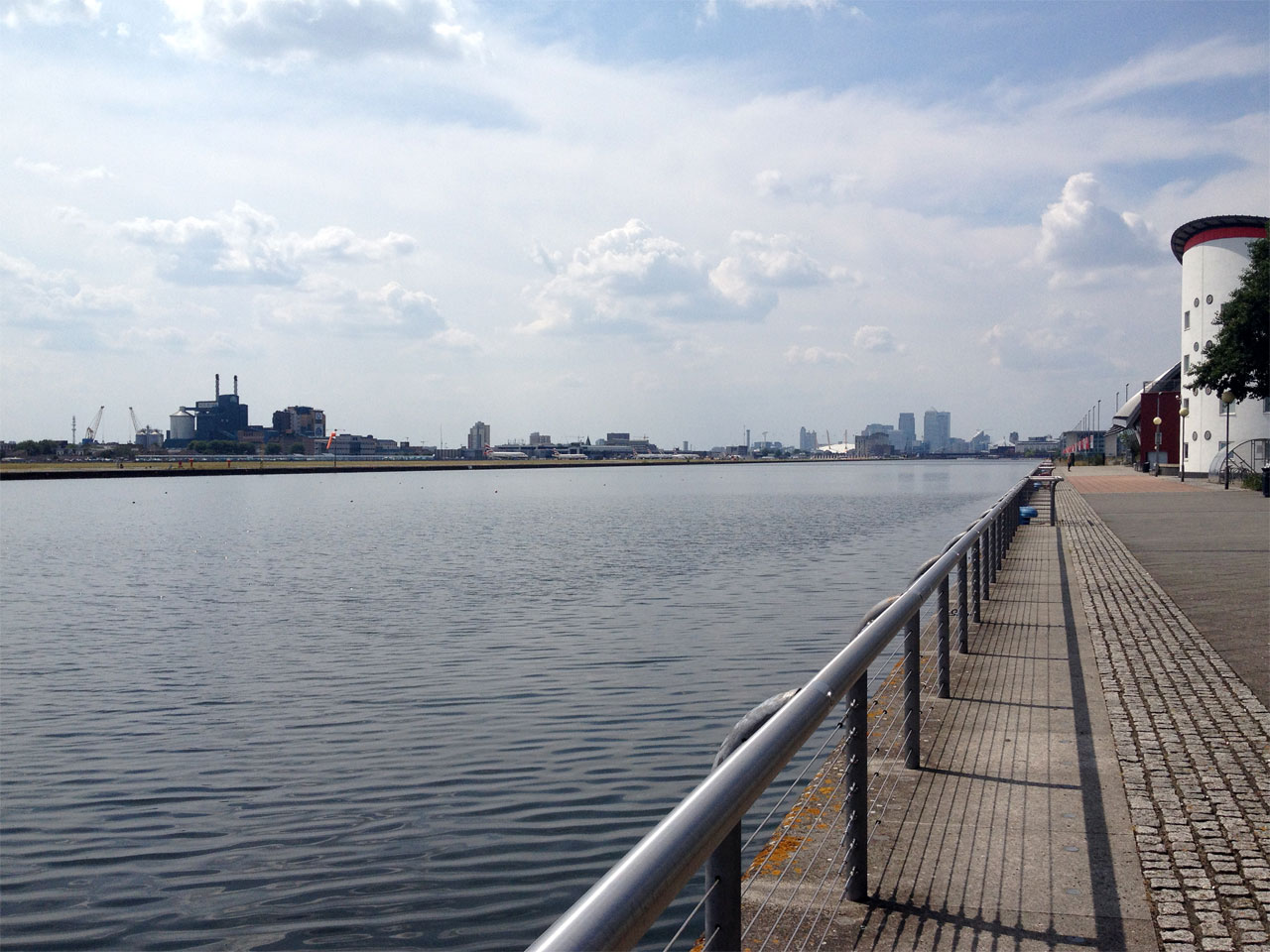 The path cut back inland at Gallions Reach, one of those barren landscapes where the city seems to just break down; a dead space where you feel on the edge, in the margins. Warehouses stood silent and still, trains rattled through an empty DLR station, grass sat fenced off and unbuilt on, and a dusty road led to a dead end where a radio mast leered like some ageless sentinel. Atlantis Avenue, the road sign said, and it seemed apt for this boulevard of nothing, a place that had sunk almost without trace on the map of London. At the end of the road was a concrete expanse with a few benches, looking out on a stretch of the Thames devoid of landmarks. 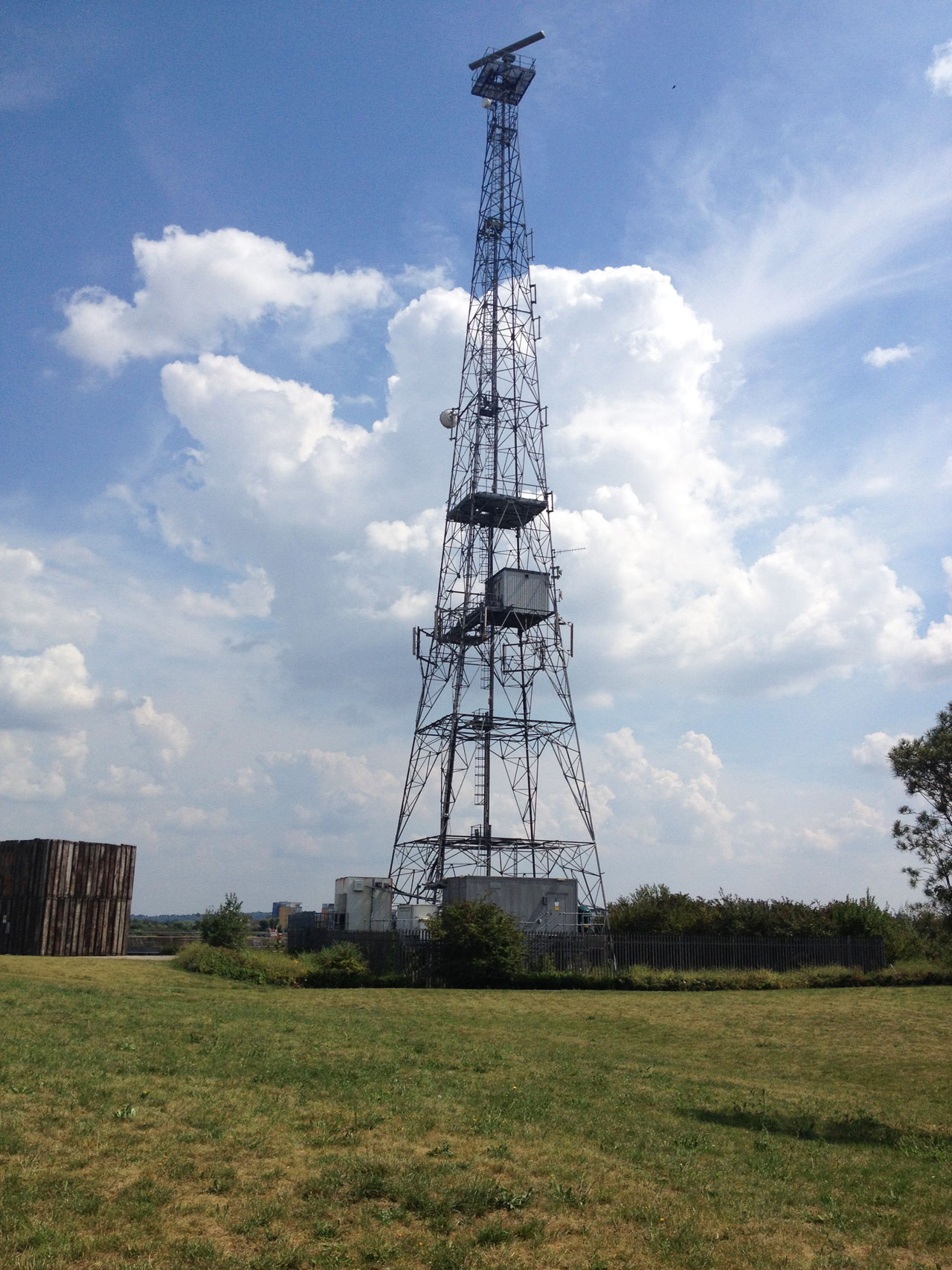 Yet even here, amongst seemingly sterile surroundings, there was life. This is London, after all, a place that ten million people call home. A narrow path ran alongside the river, where we passed a man collecting blackberries from the plentiful bushes that grew there. Here the river bank was of earth and grass, sloping naturally into the water, rather than the sheer concrete walls that encase the Thames further upstream. We walked across two sets of lock gates, and passed what appeared to be an evangelical church in the most unlikely of settings, perched on the edge of the marina, where a party was in full swing. Soca music rang out across the deserted car parks and barbed wire fences, like an echo of the empire on which these docks were built. 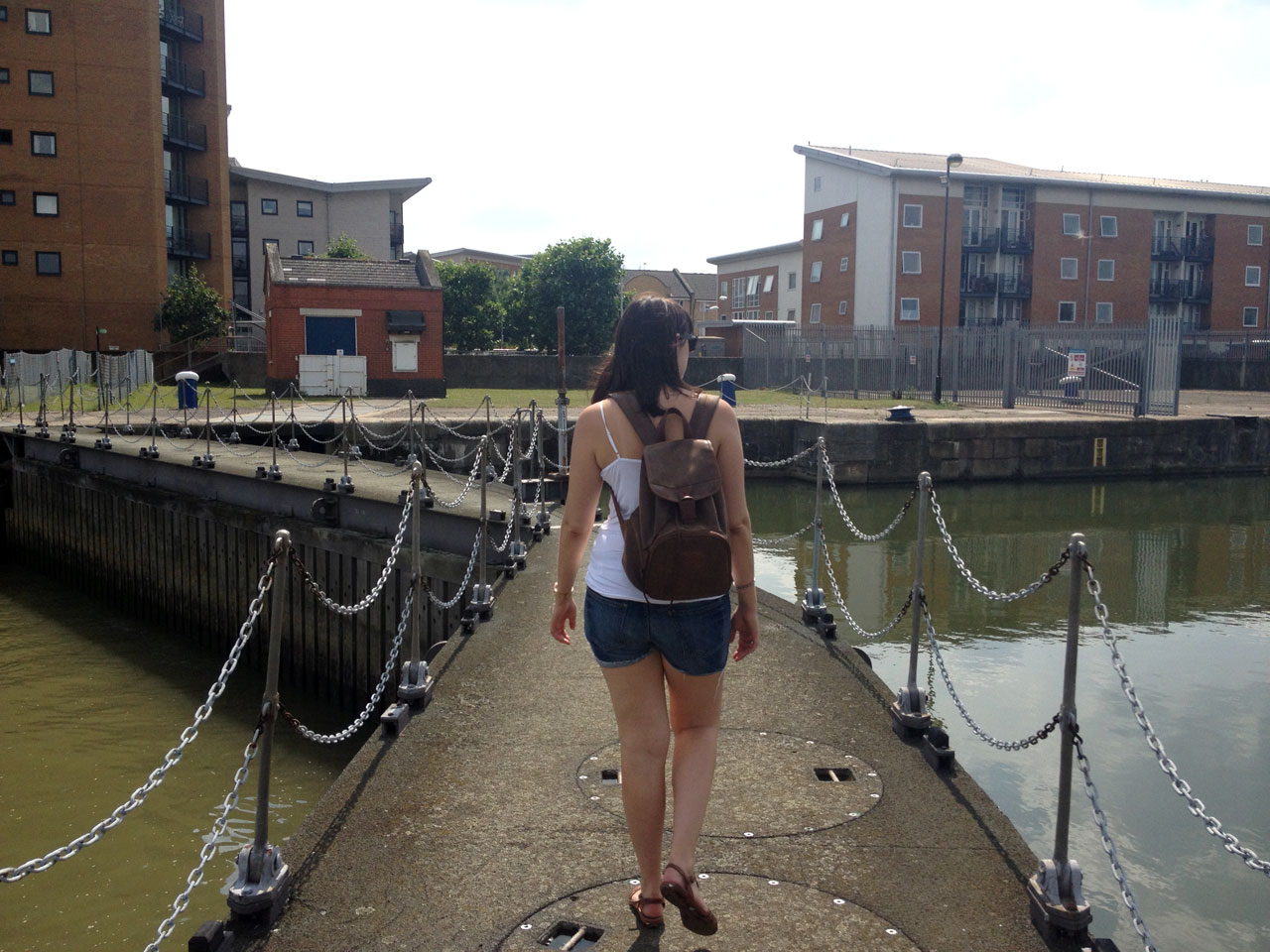 After the second set of gates we were back in a residential area, though it was another one of those new build estates that feels bleached of personality, an airbrushed place that looks nice in a brochure, but where you couldn’t imagine living. It was a gated development, and here the riverside path was only open to the public during the daytime, typical of the creeping privatisation of public space that is happening all over London. I felt like a trespasser, and it was a minor relief when we exited the gate on the other side. From there, it was a short stroll through Royal Victoria Gardens and along the road to the little brick turret that serves as the entrance to the Woolwich Foot Tunnel. 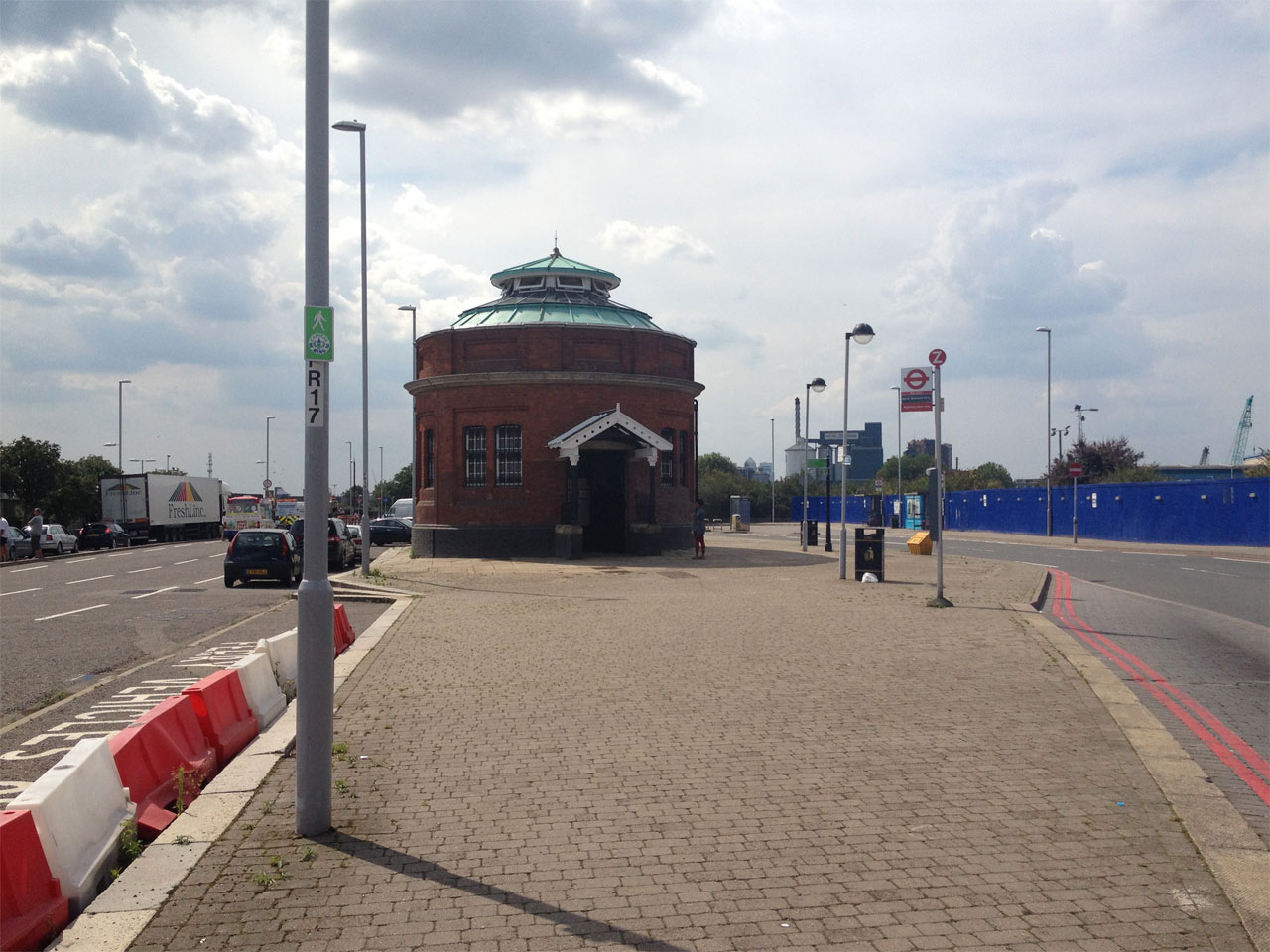 This passage under the river, which first opened in 1912, was certainly not the most pleasant way to cross the Thames. Dank and dingy, with water drip-dripping from the ceiling as if the river was about to come crashing through, the tunnel had an unnerving quality to it, like an inner city underpass late at night. There was hardly a soul down here on this particular afternoon, and every sound echoed along the whole length of the tunnel, distorting distances and playing tricks with perspective. 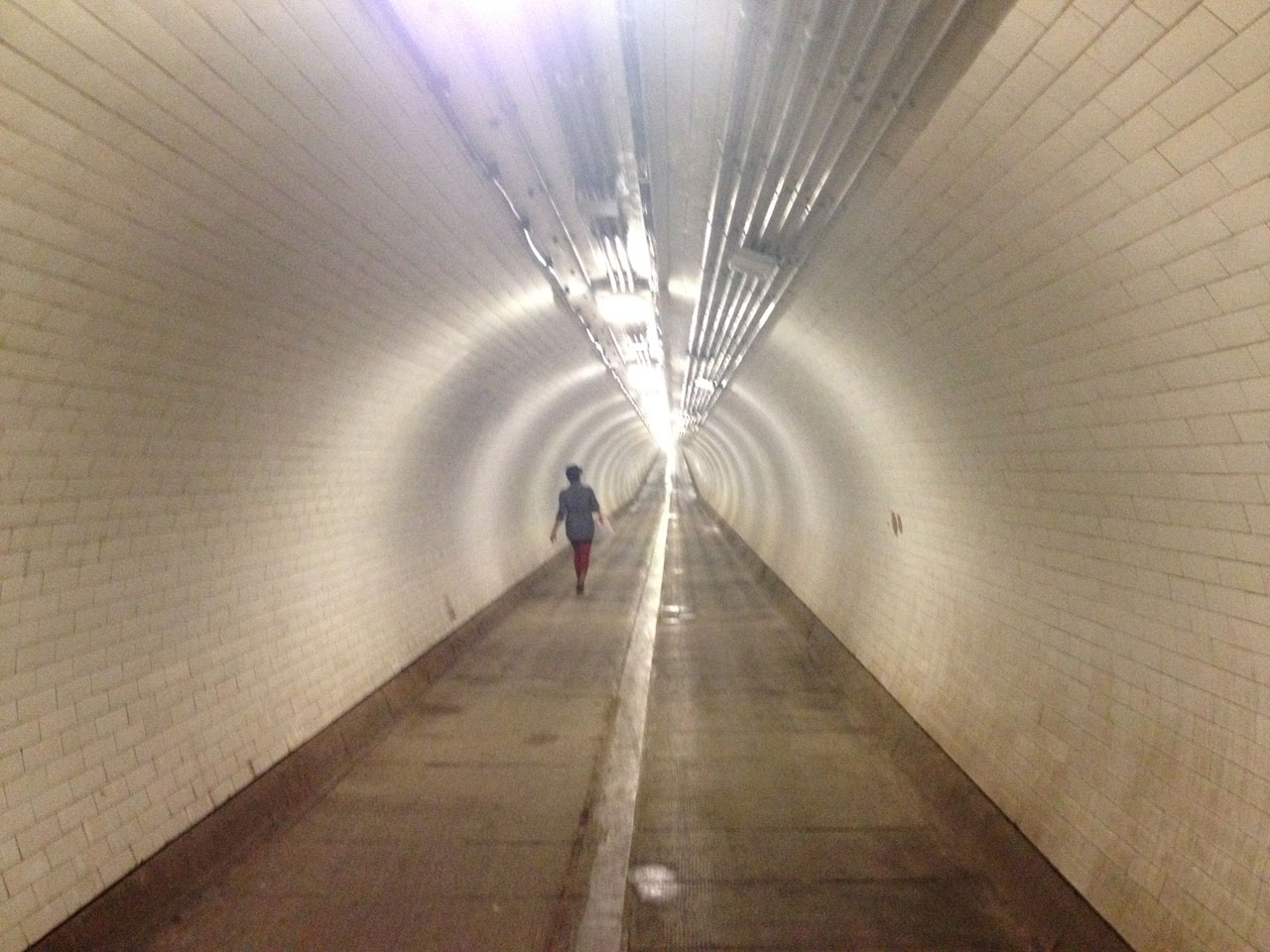 Eventually we emerged on the other side of the river, and arrived at the signpost that marked the end of this section. The stretch from Hackney Wick to Woolwich may not be the most attractive section of the Capital Ring, but it was the first time I’d really been able to connect up the dots between Hackney, Stratford and the post-industrial landscapes of the Docklands. The wave of gentrification rolling east through the city hasn’t quite reached this far yet, but rapid change was still afoot everywhere we looked. Olympic regeneration projects have turned a huge swathe of Stratford into a construction site, while down by the docks new riverside developments are springing up everywhere, reshaping and redefining neighbourhoods that would have seemed hopelessly peripheral even five years ago. The next stages of the walk would take us even further into terra incognita, into the deepest reaches of South London.

Belgium enjoys a peculiar place in the British collective imagination, pilloried as a flat and featureless non-country stuffed full of joyless Eurocrats. It’s a divided nation that looks, Janus-like, towards the Netherlands

Gap-toothed, pink-eyed and docile-looking, perhaps dulled by the sun or maybe just stoned, the old man, beaming, offered up his hand for a fist bump. “Welcome to paradise, brother.” It sounds contrived now,