It was a sunny, hangover-free Sunday in June when we decided to embark on the Capital Ring Walk, a 78-mile long route around London that connects up many of the capital’s lesser known sights. The walk is broken up into 15 manageable sections, and we kicked off with Section 12, which runs from the leafy north London neighbourhood of Highgate east to Stoke Newington High Street.

The route begins with the Parkland Walk, a nature reserve that was once a railway line running from Highgate to Finsbury Park. The railway tracks are long gone, and as we headed down a slightly muddy wooded path, horseflies flitting about in the dappled sunlight and the occasional squirrel scampering up a tree, it was hard to imagine trains ever rumbling through here. An old station lies abandoned at Crouch End, where the crumbling platforms are overgrown with weeds and the station building is daubed with graffiti. 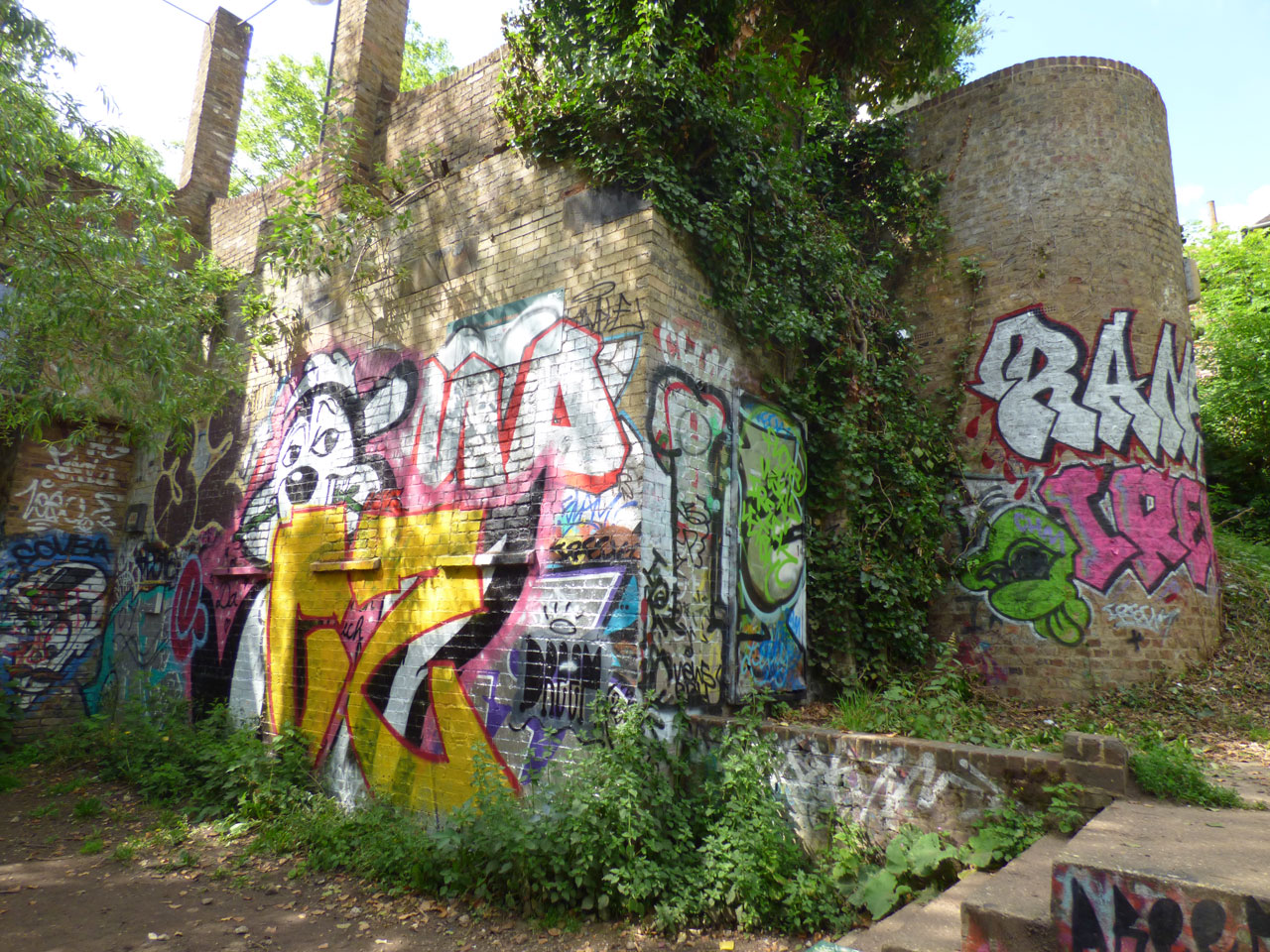 A little further along the railway line, clinging to a brick wall high up on the left hand side of the embankment, is a metal sculpture depicting a goblin-like creature known as a spriggan. Spriggans originate from Cornish folklore, and the Capital Ring guide to Section 12 has this to say:

“Spriggans were grotesquely ugly, found at old ruins guarding buried treasure and generally acting as fairy bodyguards. They were also said to be busy thieves. Though usually small, they had the ability to swell to enormous size – they’re sometimes speculated to be the ghosts of the old giants. They were said to steal human children and leave baby spriggans in their place.” 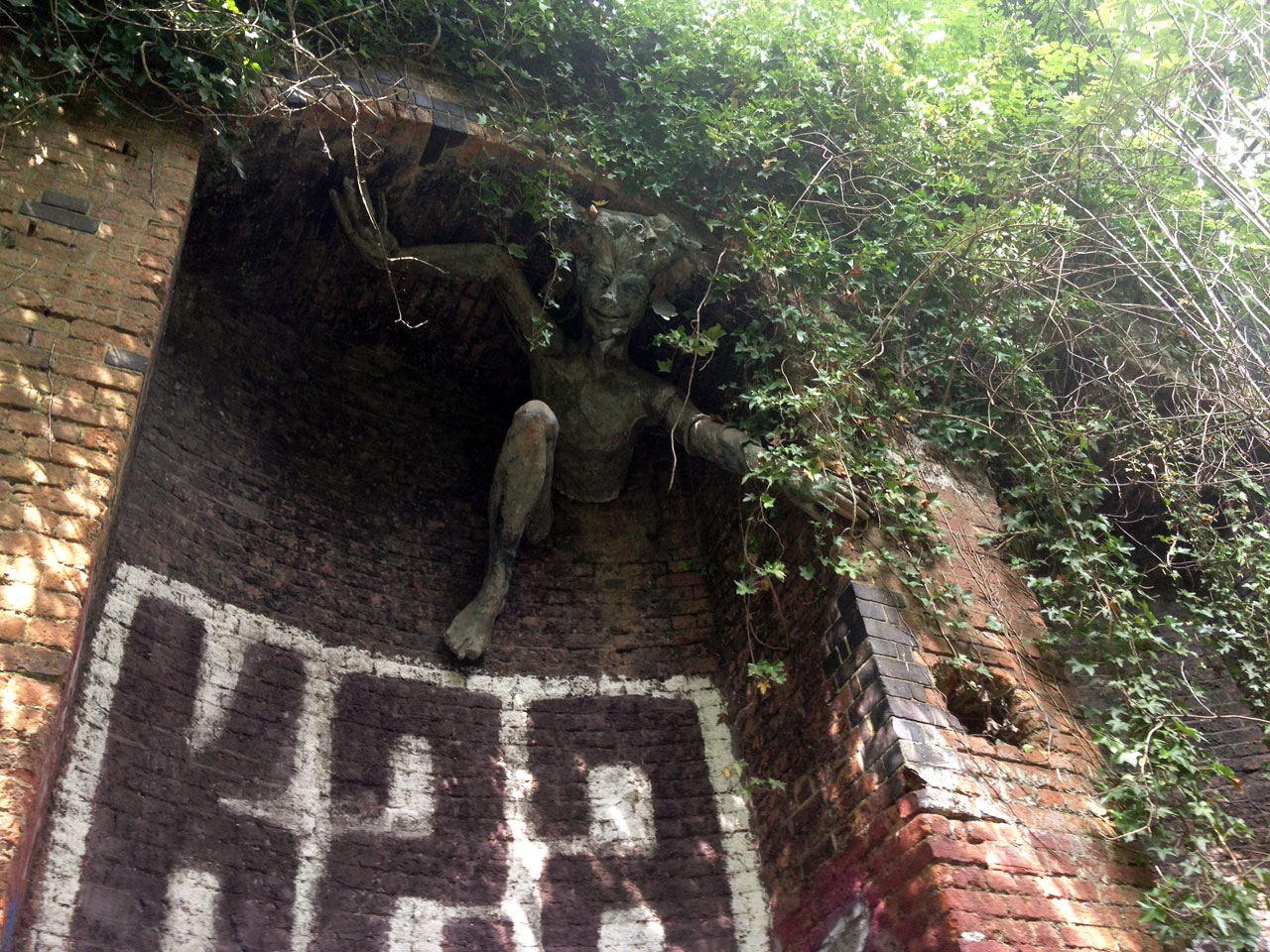 Even though the sculpture is only about 20 years old, it seemed imbued with a suggestion of something much older within the woods, something a little unsettling. If it wasn’t for all the other people walking along the path that afternoon it would have seemed quite eerie, surrounded as we were by the decaying remnants of human civilisation, the trees, and the Tolkienesque spriggan staring down at us.

We crossed Finsbury Park, full of the laughter and languor of a summery Sunday afternoon, and the natural gave way to the artificial as we followed the course of the New River, a 400-year-old man-made channel that was built to bring water down from Hertfordshire into London. The river still performs this function today, feeding the East and West Reservoirs in Stoke Newington, though it’s not the most attractive stretch of water. 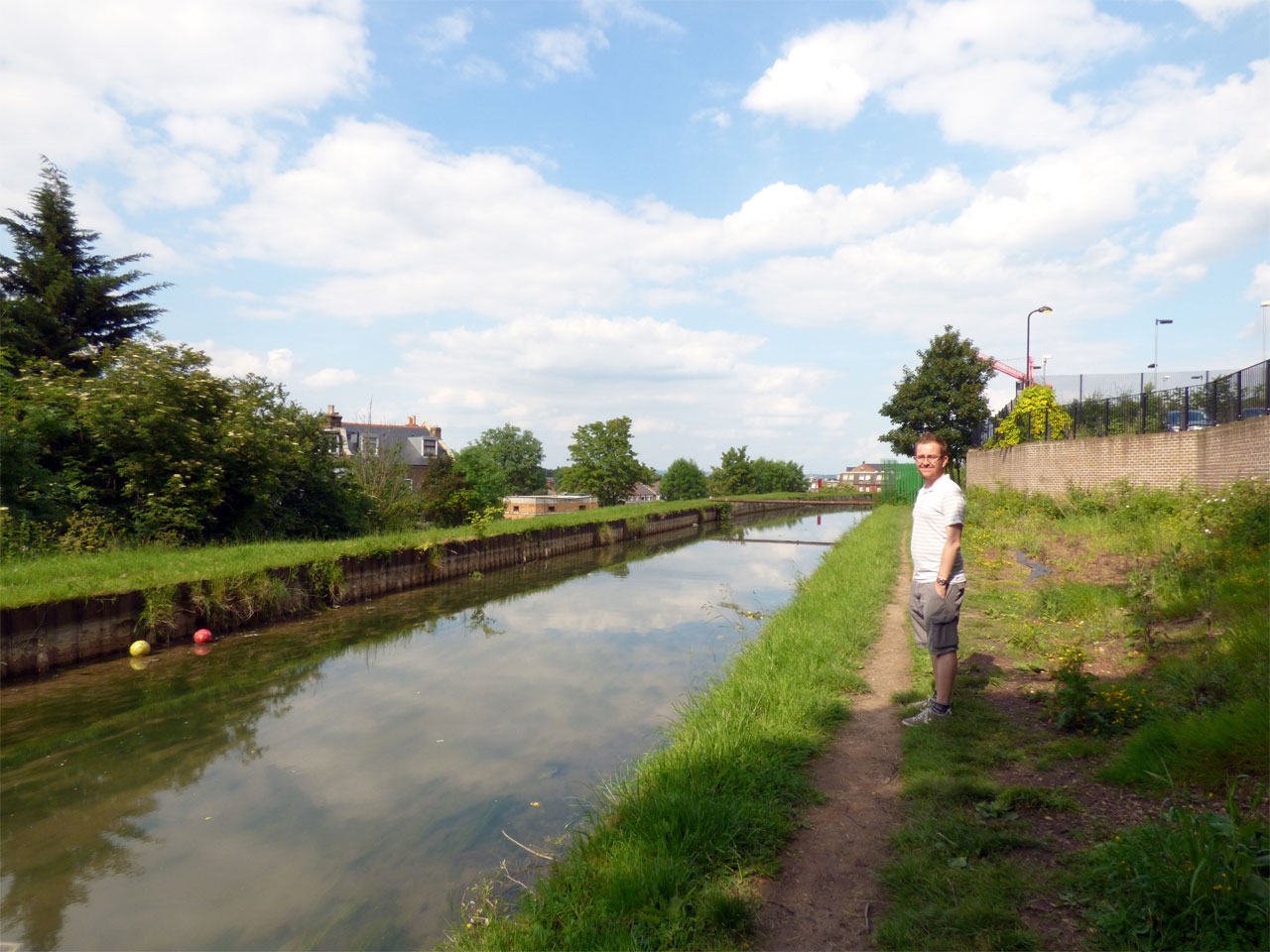 The river passes through the huge Woodberry Down estate in Manor House, where a controversial 25-year regeneration project is currently underway. The newly built part of the estate, overlooking the West Reservoir, seemed completely incongruous, all gleaming towers, meticulously trimmed lawns and straight-out-of-the-marketing-brochure fountains. It didn’t seem quite real, like some pamphlet on the ‘housing estate of the future’ brought to life, and everything looked a little bit too perfect, a little bit false.

The character of nearby Stoke Newington has also undergone massive change over the last decade or so, though in a slightly more organic fashion than the dramatic remoulding of Manor House. Once a gritty corner of Hackney, Stoke Newington is now yummy mummy central, packed full of artisan bakeries and vintage boutiques, with house prices to match. We stopped on Church Street for a well-deserved cold drink and a cake, before wandering through the overgrown Abney Park Cemetery, last resting place of Salvation Army founder William Booth, and down to the junction of Stamford Hill and Cazenove Road, where this section of the Capital Ring ends.

A couple of weeks later, on another scorching Sunday afternoon, we carried on where we left off, heading east along the residential streets where Stamford Hill bleeds into Clapton. This area is home to the largest Hasidic Jewish community in Europe, a very visible presence thanks to the distinctive dress of the men. On such a sweltering afternoon their long black coats looked unbearably hot, and I found myself wondering, not for the first time, why God, if he existed, would care about something as trivial as the clothes we wear. 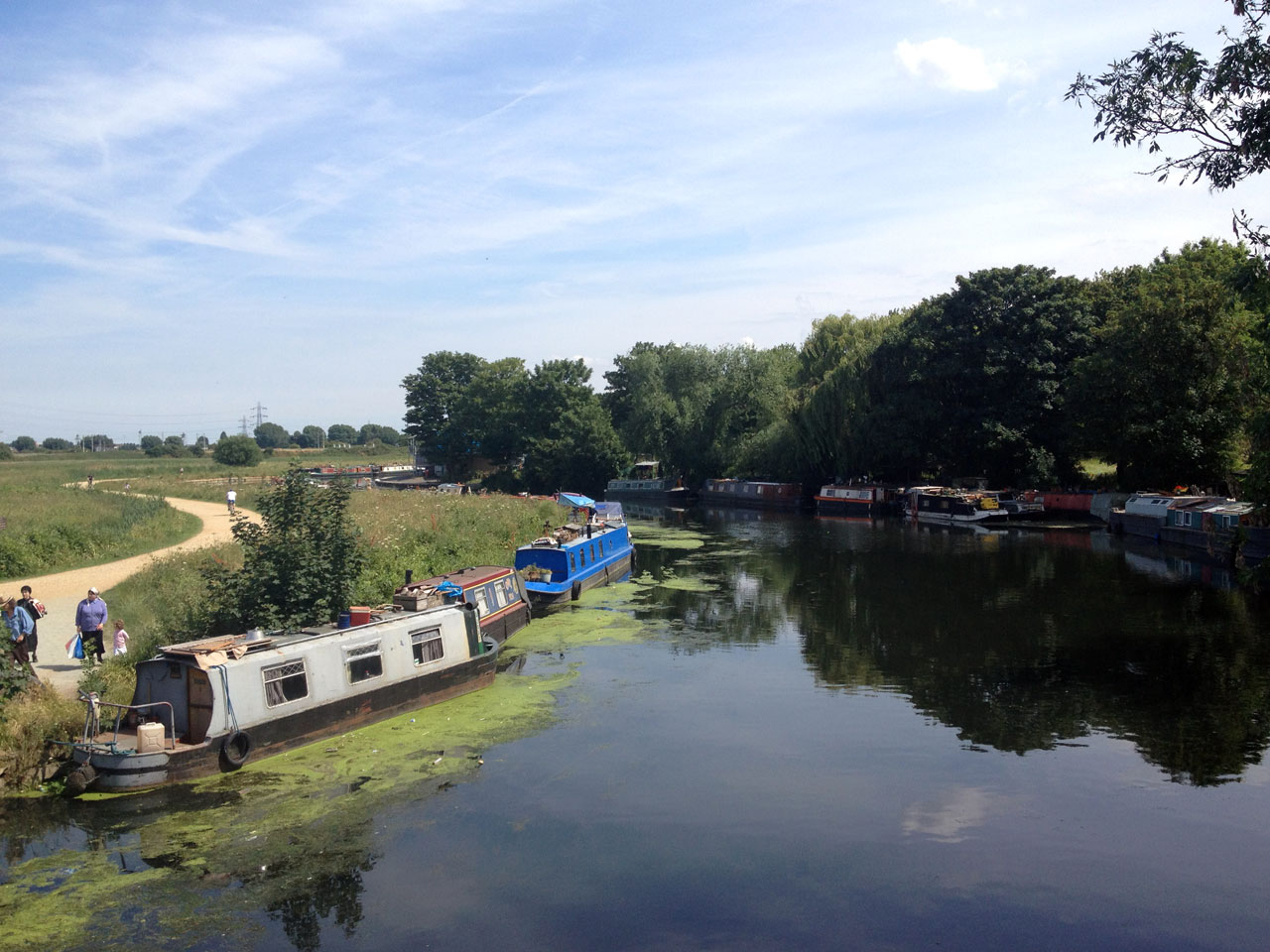 We crossed the rapidly gentrifying Upper Clapton Road, once part of Hackney’s infamous ‘murder mile’, and made our way across Springfield Park down towards the River Lea, whose course we would follow for the rest of this section of the Capital Ring. Suddenly we found ourselves in a landscape that didn’t look much like London, and certainly felt far removed from the densely populated Hackney streets that we’d just left. Stretching out to the east was Walthamstow Marsh, a nature reserve that’s more reminiscent of the Essex countryside than the inner city, and the path running alongside the river was impressively well maintained, a clear beneficiary of the money that was thrown at this area to clean it up for the Olympics. 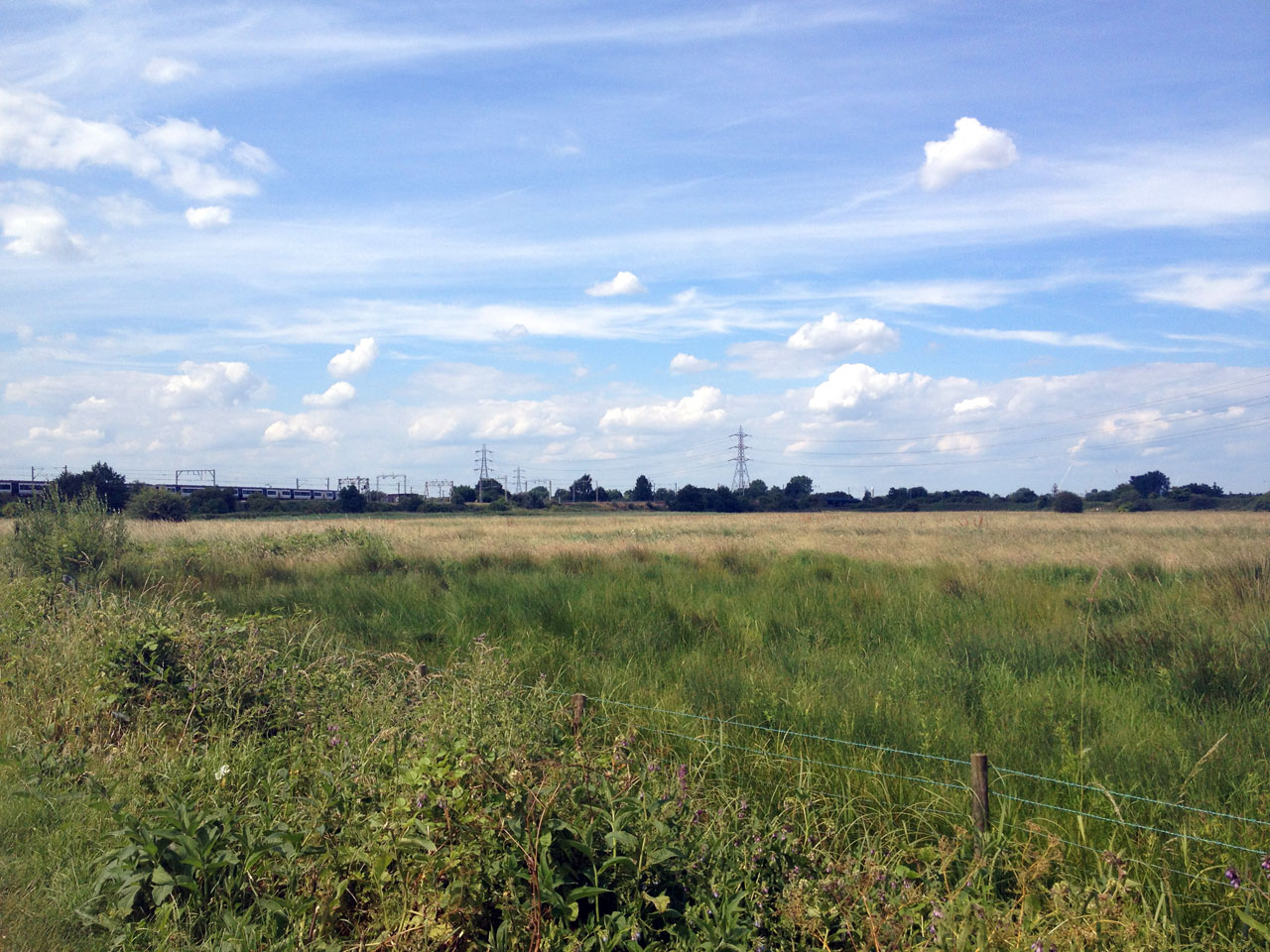 There was a bucolic sort of buzz to the riverside, with houseboats bobbing in the water, Sunday cyclists meandering along the path, and people sat out on the grass verges enjoying a cider in the sun. At Millfields Park the river split in two, and the slightly confusing naming conventions of the river began to make a little more sense: the old, natural section of the river is called the River Lea, while the man-made canal section is known as the River Lee Navigation. 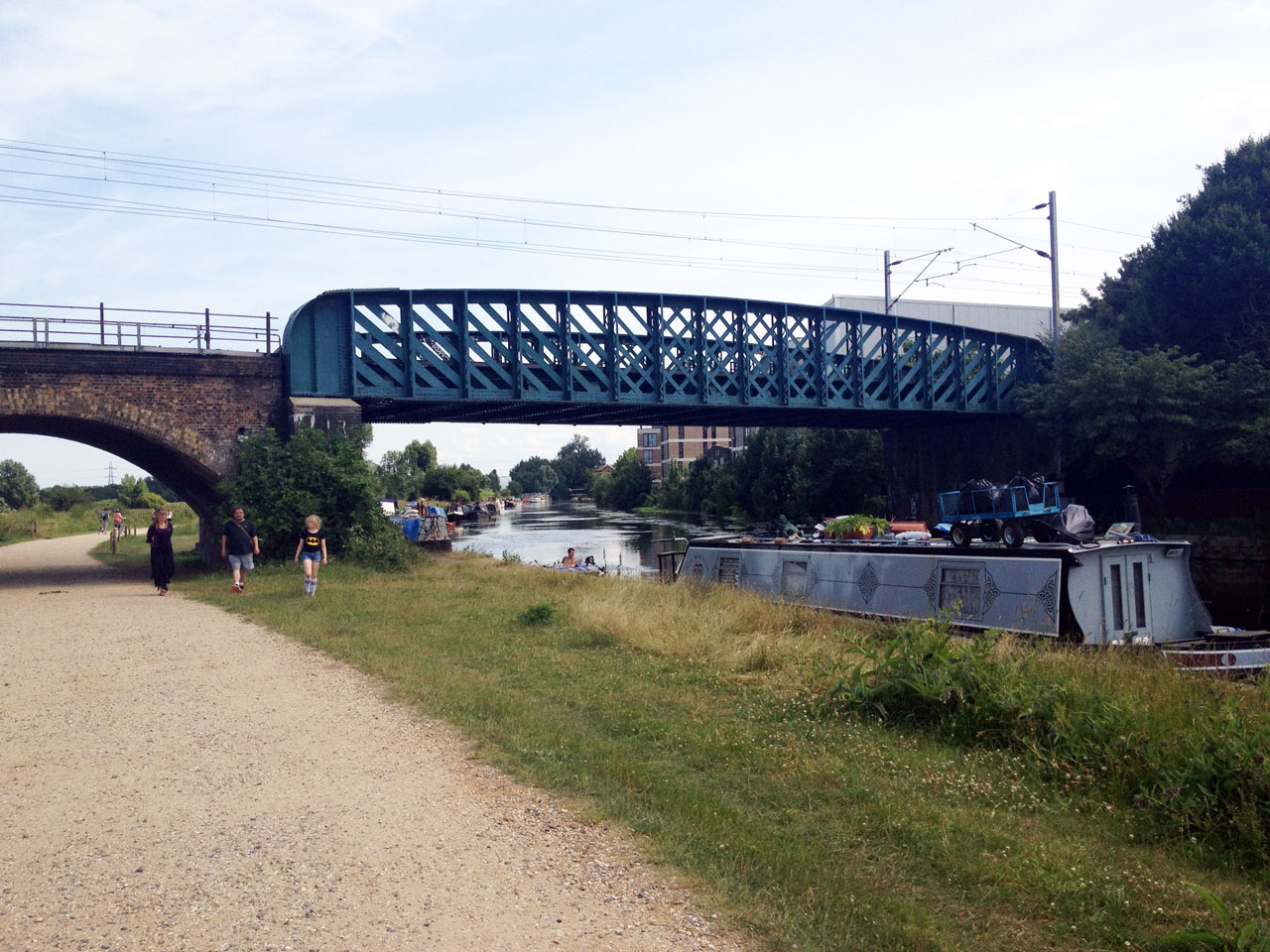 It was the latter that we now followed, stopping for a rest at a canal boat that had been converted into a travelling café by an old hippie type, who tried to persuade us to finish off the cheesecake that sat sweating under a plastic cover in the boiling bowels of his ship. We politely declined, and sat out on his tiny deck with a cold drink instead, reflecting on our circumnavigation of the Capital Ring so far. We talked about the rapid changes that so many London neighbourhoods are going through, and speculated on how places like Woodberry Down might look a few decades from now.

Once refreshed we carried on along the towpath, and our surroundings became increasingly industrial in character as we reached the end point of this section at Hackney Wick, another formerly neglected area of east London that’s changing fast. It was a place, and a theme, to which we would return later in the summer, as we continued on our way around the Capital Ring. 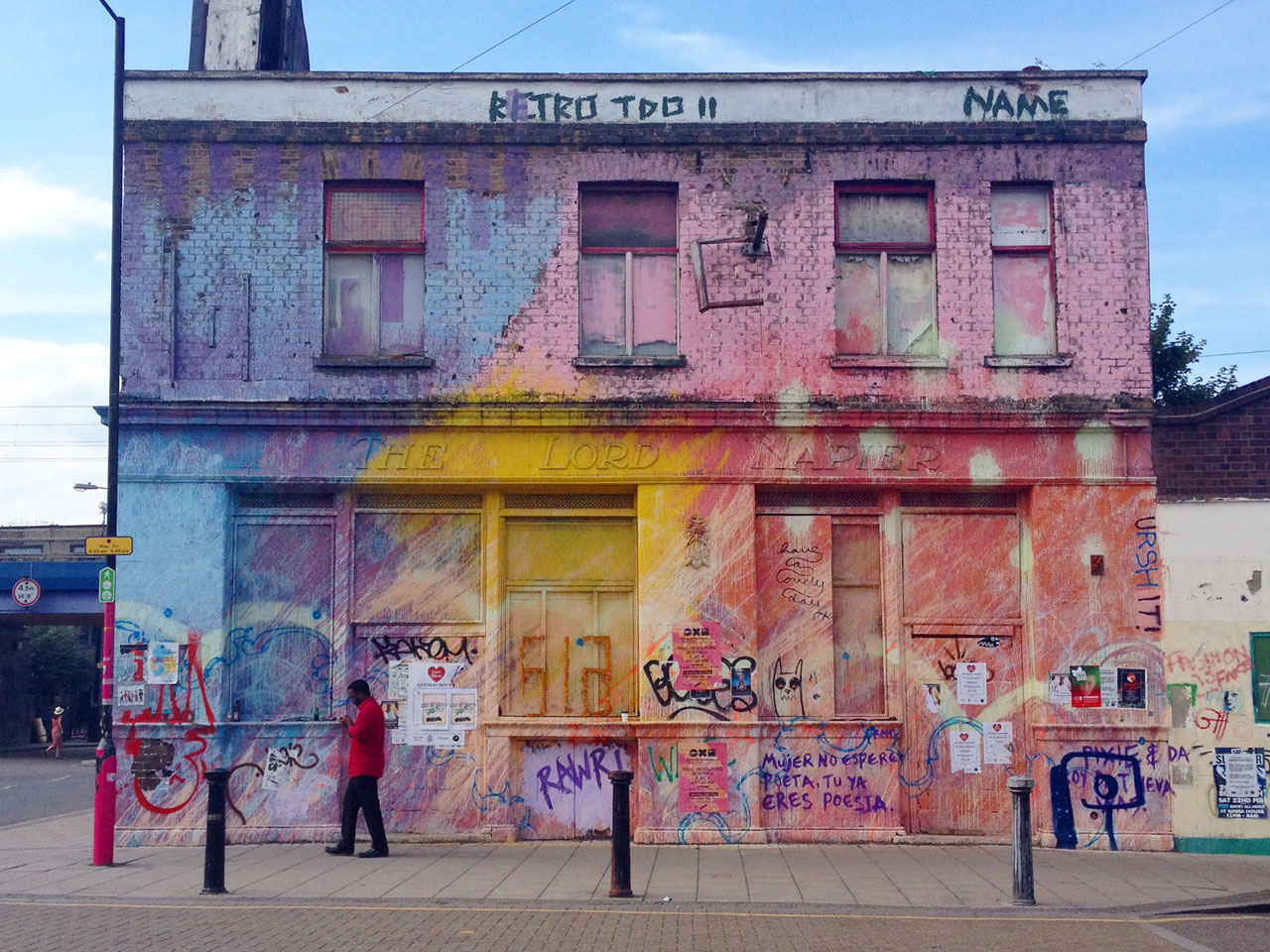 There’s an election on in the UK, in case you hadn’t noticed, and questions of national identity are swirling around like never before, from the resurgent Scottish nationalism of the SNP

It was only a couple of weeks into December, but already Riga was bitterly cold. The Daugava river had begun to freeze around the edges, and the air stung my ears, numbed my