The Capital Ring Walk is a 78-mile long route around London that links together many of the capital’s lesser known corners, broken up into 15 smaller sections. This post follows on from my previous account of Sections 14 and 15, running from Hackney Wick to Woolwich.

One thing I’ve noticed so far on the Capital Ring Walk is the number of places you pass through that don’t really feel like they’re in London. Maybe it’s just my Zone 2-centric view of the capital, but it’s an impression that keeps returning as we circumnavigate the city, from the swaying bulrushes of Walthamstow Marshes to the suburban slumber of the housing estates around the Docklands. Woolwich town centre was another case in point, with a high street that could just as easily have belonged to a provincial town in Essex or Kent. A fire and brimstone preacher paced back and forth outside Superdrug, commanding the crowds to repent of their sins or face eternal damnation. The Saturday shoppers seemed apathetic, however, unmoved by the threat of a fate worse than Woolwich. 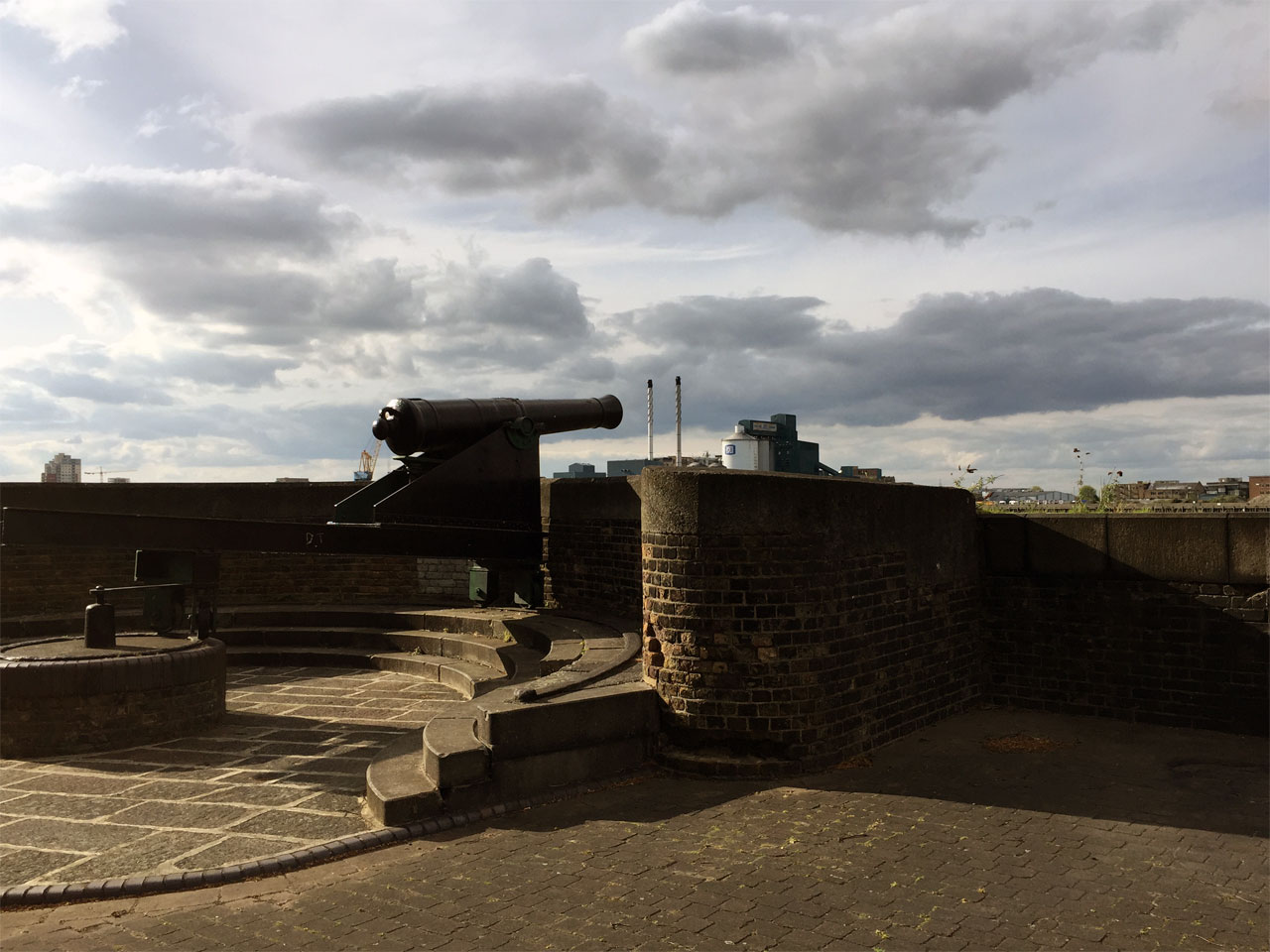 We picked up the Capital Ring where we left off back in July, at the southern entrance to the Woolwich Foot Tunnel. We followed the path along the river, past a couple of old cannons that linger on from the time when this was a naval dockyard, and up on to a viewing platform overlooking the Thames Flood Barrier and the towers of Canary Wharf, silhouetted against the washed out late afternoon sky. This was to be our last sight of the Thames on the Capital Ring for some time; we won’t meet up with the old brown river again until we reach Richmond at the end of Section 6, whenever that may be. 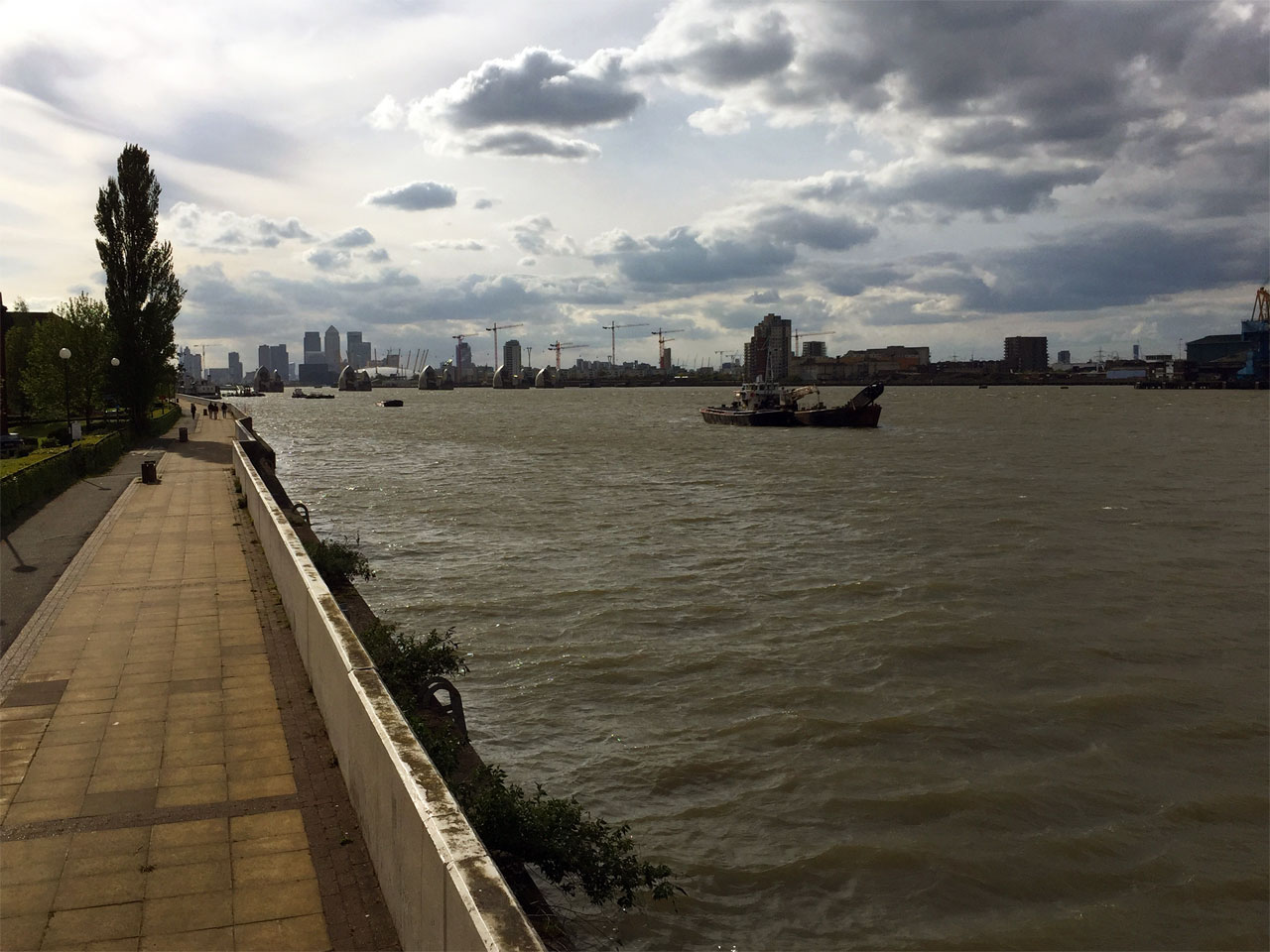 We headed south away from the river and through a housing estate, past a derelict warehouse and out on to the busy Woolwich Road. A solicitors’ office was adorned with a large sign asking passers-by and traffic: “Been arrested?” It didn’t seem like the best advert for the area, though the character of the route started to change as we entered Maryon Park, a leafy enclave that was to set the tone for the rest of this section of the Capital Ring.

Up a flight of shaded steps was a children’s zoo of sorts, home to a scattering of sheep, chickens and a few deer, and the corridor of greenery carried on into Charlton Park. Here we were met by the surreal sight of a cricket match in full whites taking place against the backdrop of Charlton House, a 17th century Jacobean mansion. This quintessentially English scene seemed utterly jarring so soon after the post-industrial blight of the riverfront around Woolwich, typical of the way in which London seems to layer juxtapositions on top of contradictions. 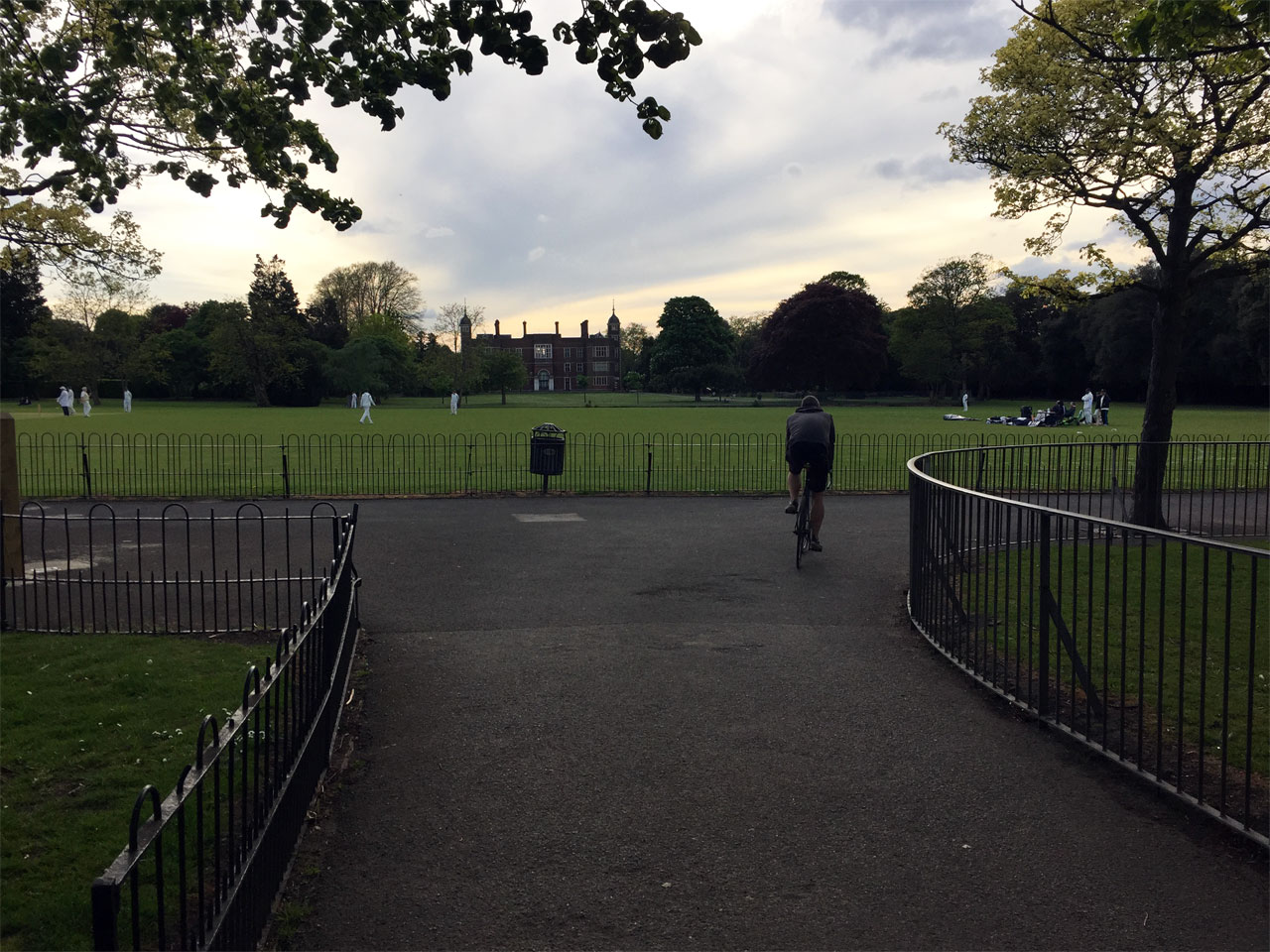 Neighbouring Hornfair Park was more stereotypically south London, overlooked by stubby tower blocks and echoing with the sound of kids pelting around on a motorbike they were almost certainly too young to ride. On Woolwich Common the foliage closed in around us again, and once more there was that feeling of ‘not London’ about it. It wasn’t quite the idyllic, summery meadow that I initially supposed, however: for reasons which were difficult to fathom, one particular bush opposite a park bench had become a sort of dog shit Christmas tree, the branches adorned with dozens of little plastic bags full of canine excrement, hung like filthy baubles. 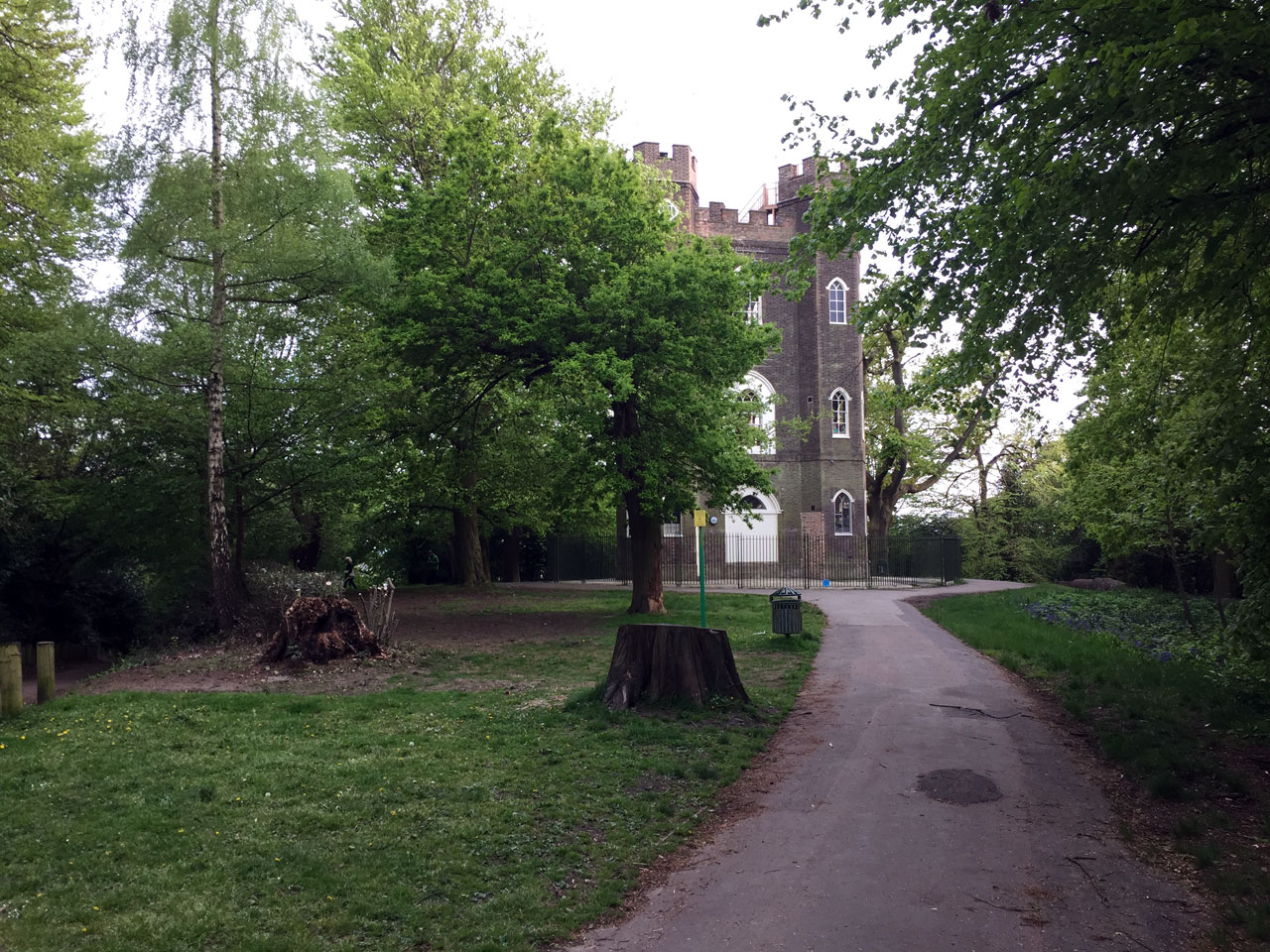 We emerged on to Shooters Hill Road, and crossed into yet another area of parkland, Eltham Common. Eltham was, infamously, the place where Stephen Lawrence was murdered, and up until now that was all I really knew about the area. Happily, it also turned out to be home to some of the most picturesque spots on the Capital Ring so far. The hilltop Castle Wood hides within it the unexpected Severndroog Castle, a small, triangular tower built in the 18th century and named after a fortress in India. 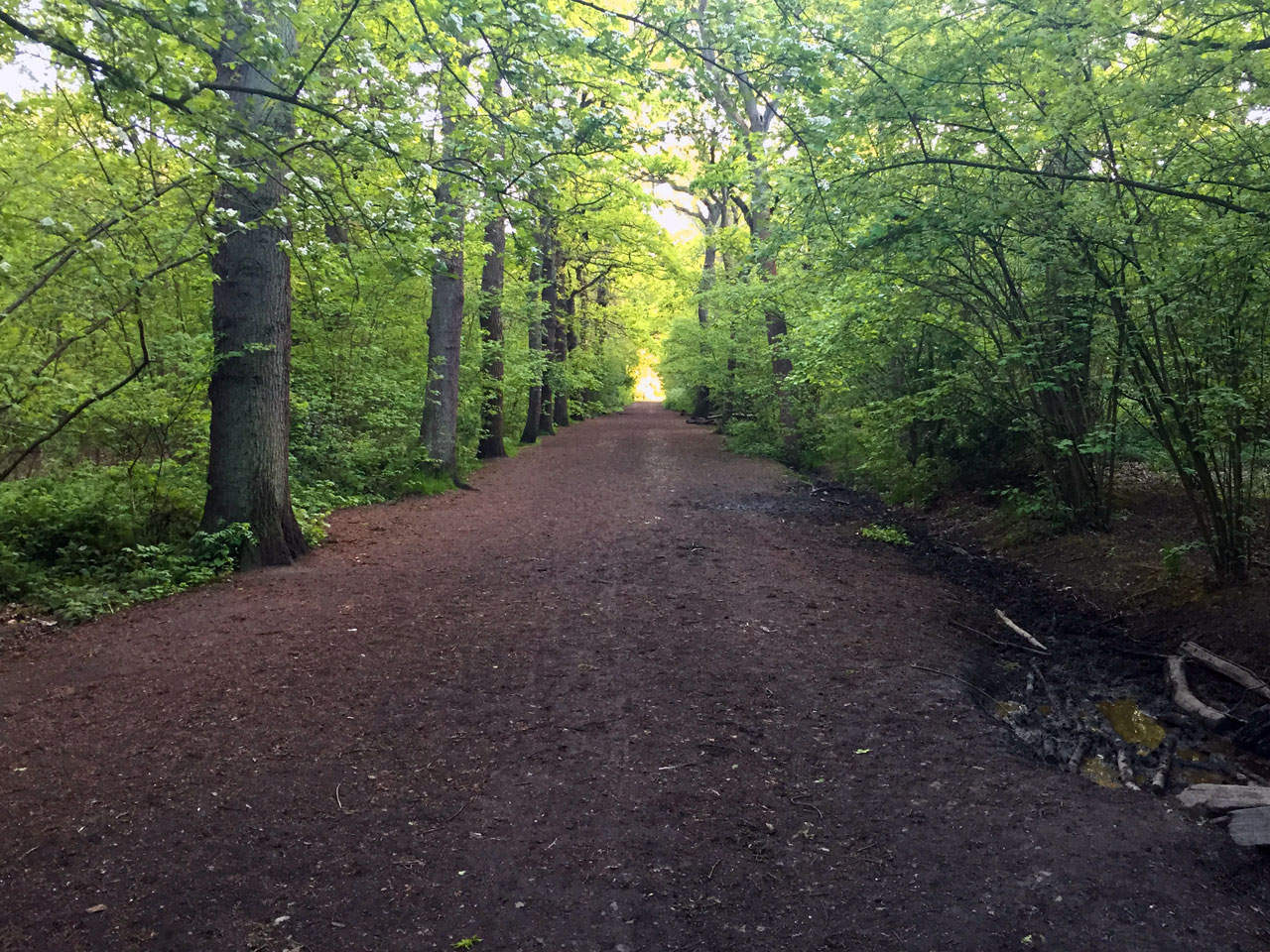 The ancient Oxleas Wood sprawls out around the castle, and amongst these hushed, shady pathways we managed to get a little lost, with the light starting to fade as evening settled in. Our tempers began to fray after what was quite a lot of walking; this is one of the longer sections of the Capital Ring at around seven miles, and we’d started late in the afternoon. Luckily a combination of GPS and arrows painted on trees helped us find our way out onto Oxleas Meadows, where we enjoyed a fine view out towards the fringes of south east London. 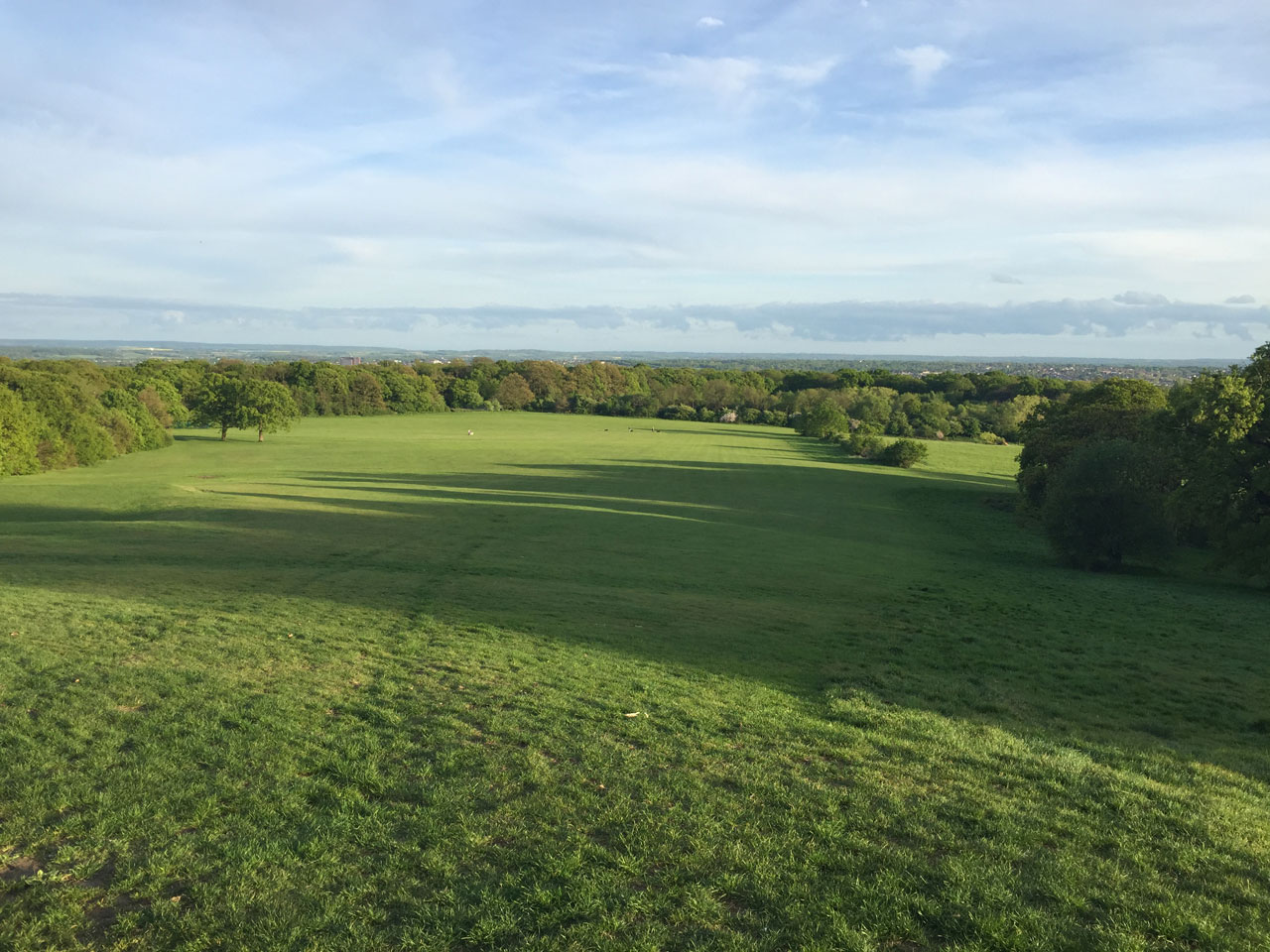 From here it was a relatively short walk through Shepherdleas Woods, another virtually deserted thicket carpeted with bluebells, to reach Falconwood train station, where this section of the Capital Ring ends. After the stretch between Hackney Wick and the Thames Barrier, which was at times pretty grey and cheerless, it had been nice to return to leafier surroundings. And it was another section of the walk that had surprised me in its diversity, with a real contrast between the urban centre of Woolwich and the centuries-old woodland to the south. 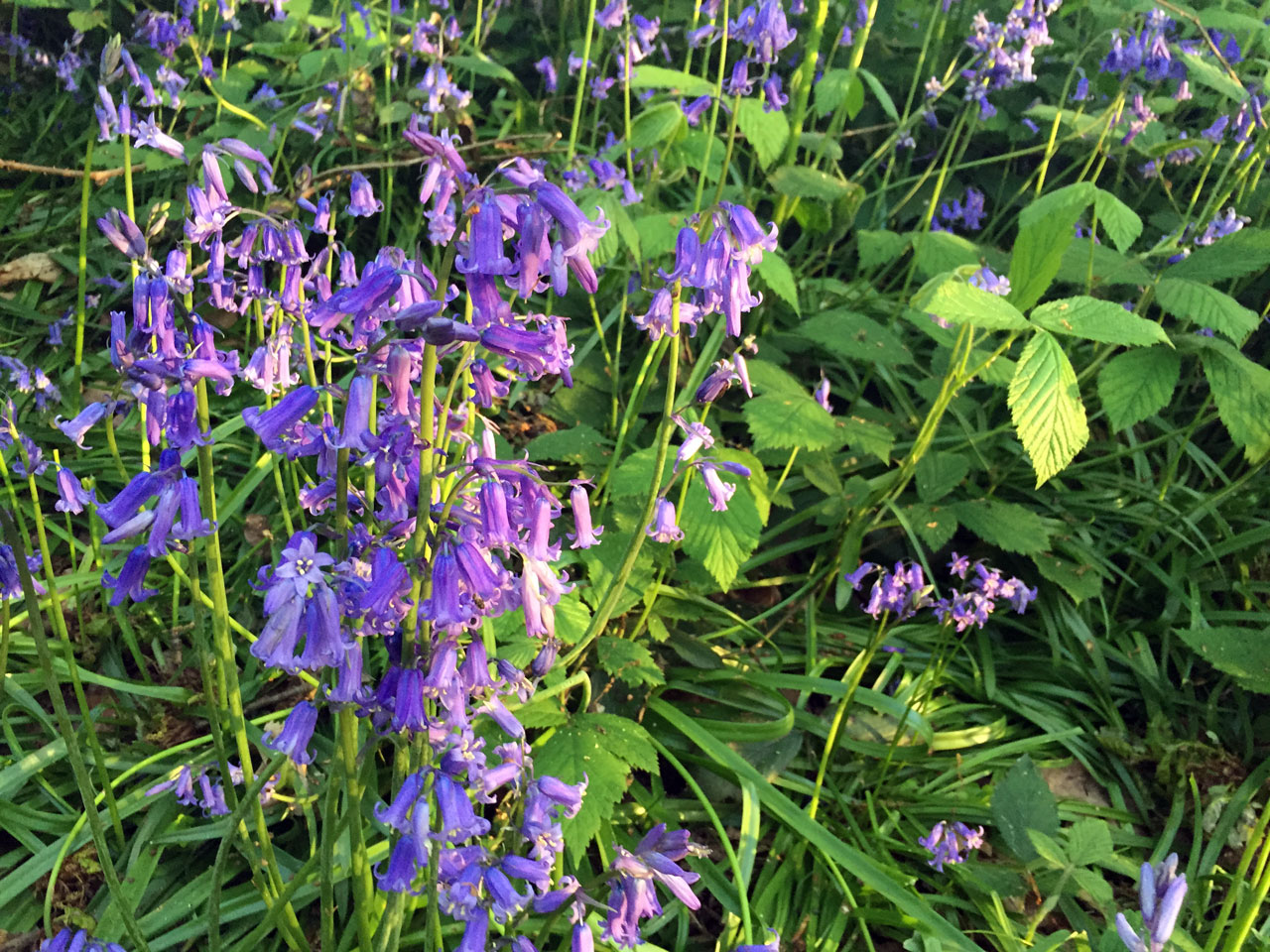 “We look for a split second and then we look away. Or we look but then turn it into a joke (“more signs of the Apocalypse!”). Which is another way of looking away.

Alighting the bus in the centre of Shkodër, our feet had barely touched the pavement before a swarm of taxi drivers was upon us, all shouting the same thing. “Montenegro taxi? Montenegro taxi?

Not Here
—
Capital Ring Walk: Woolwich to Falconwood
Share this