On 25 April 1966, Tashkent was flattened by an earthquake. The city that stands today is largely the creation of the Soviets, who rebuilt the Uzbek capital as a model socialist metropolis; this meant plenty of concrete, but also verdant parks, canalside paths and wide roads designed for ostentatious military parades. My first impression was one of surprise; here, in the centre of what is so often a chaotic region of the world, stood what seemed like a pleasant, orderly, laid back city. Not only that, but a modern and cosmopolitan place that serves as a hub for the whole of Central Asia, just a short distance from the borders with Kazakhstan, Kyrgyzstan and Tajikistan. 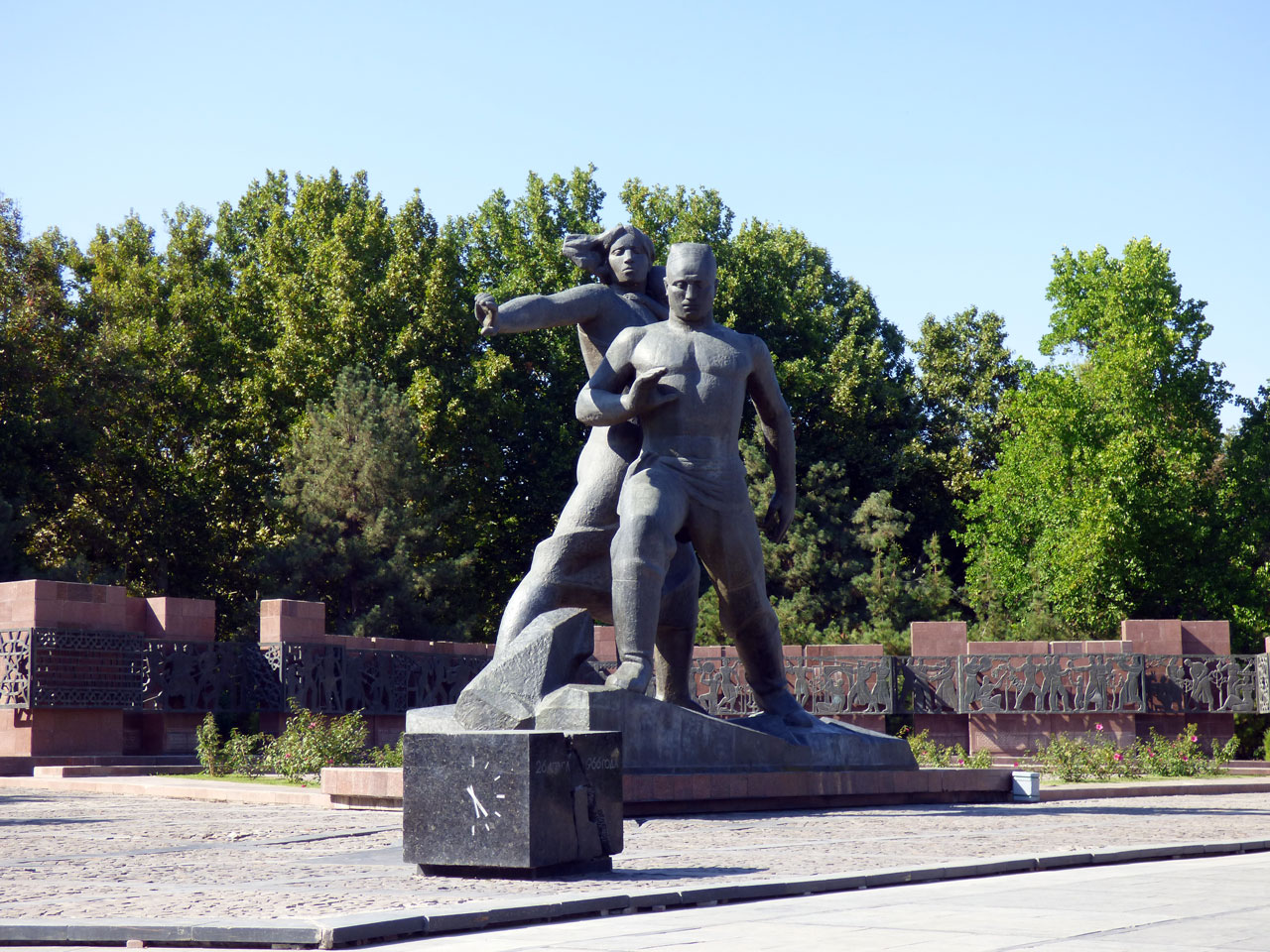 In Tashkent, however, all is not what it first seems, and the longer we spent in the city, the more that the everyday reality of life here started to make its uncomfortable presence felt. Uzbekistan has been ruled for 25 years by Islam Karimov, one of the world’s most unpleasant dictators. His regime consistently ranks as one of the world’s most corrupt, and its human rights record is appalling. While he doesn’t maintain a visible personality cult in the same way as his erstwhile neighbour, the notorious President Niyazov of Turkmenistan, you can nevertheless see Karimov’s fingerprints all over Tashkent, and the city has been adorned with the same sort of ugly, narcissistic baubles that scar the capitals of despotic regimes the world over. 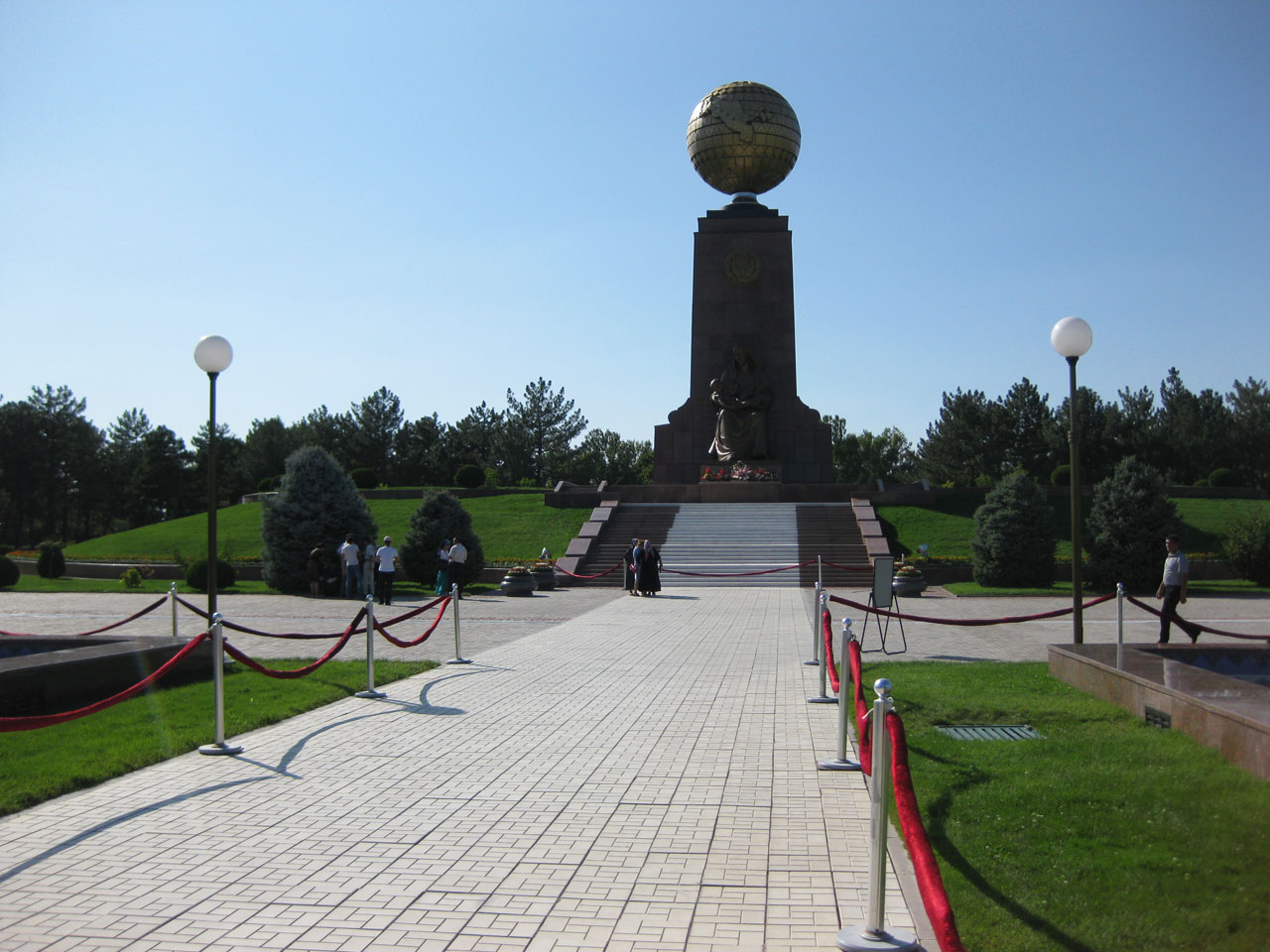 In Mustaqillik Maydoni (Independence Square) a plinth that once supported a statue of Lenin is now crowned by a giant golden globe, on the surface of which a hugely enlarged Uzbekistan is the only country. A short walk away, Amir Timur Square is dominated by a statue of the eponymous 14th century warlord on horseback; since independence, Timur has been adopted as the official state-sanctioned national hero, despite being neither Uzbek nor a particularly pleasant individual. The parallels with Karimov, a man of uncertain ethnic origin who only learned the Uzbek language after independence, and who is reputed to have dished out punishments including the boiling alive of opponents, are not hard to discern. 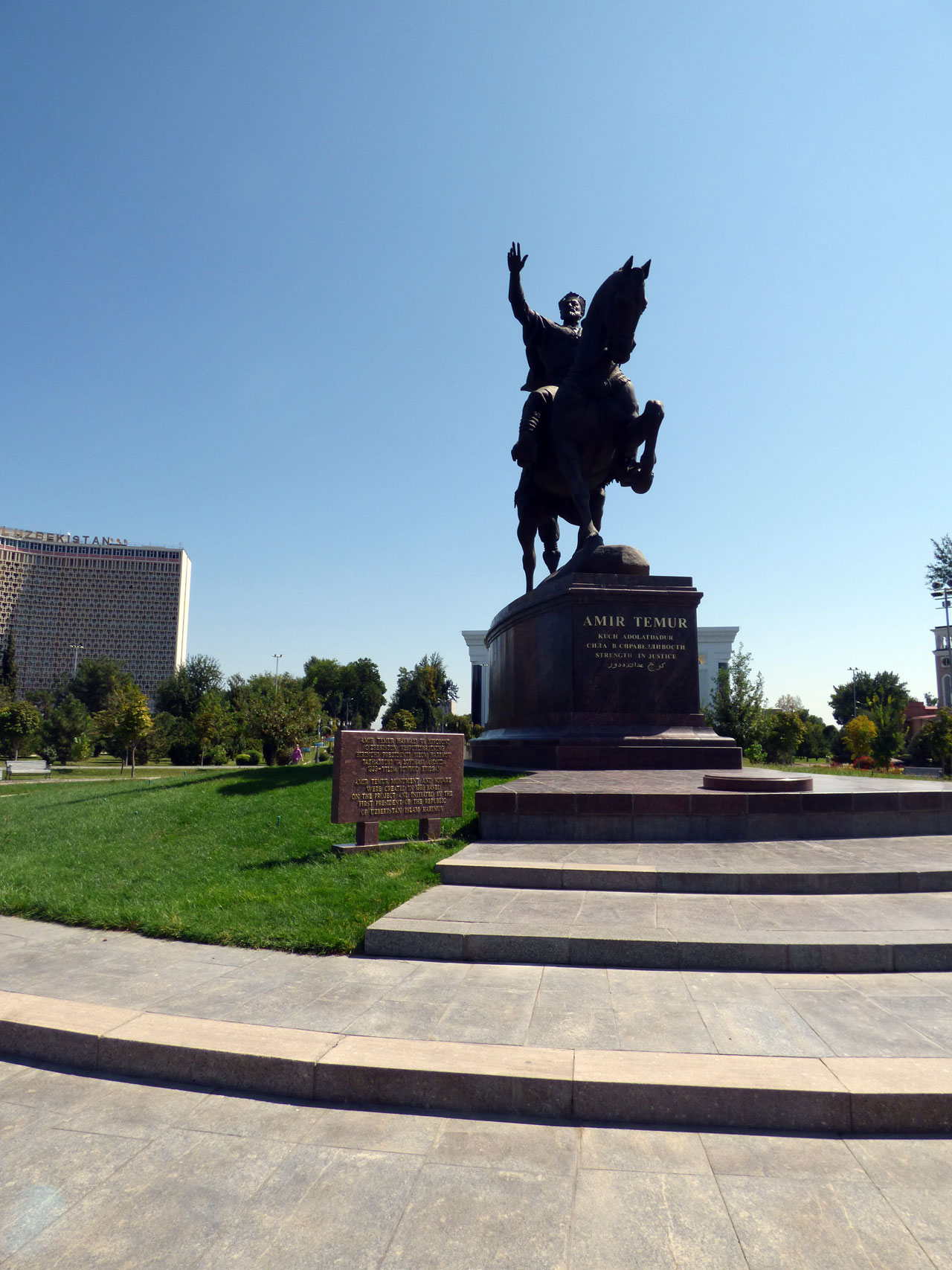 In Tashkent I really felt that I was in a repressive police state, in a way that wasn’t quite so obvious elsewhere, or at least not to us as foreigners. The city was crawling with green-uniformed police, especially below ground on the city’s metro system. Tashkent’s metro stations are stylistically spectacular, adorned with elaborate murals and lit by dazzling chandeliers, but sadly it’s against the law to take photos down there, since the metro is considered a vital part of the nation’s military infrastructure. And it’s not just the metro that’s been militarised; the more you walk around above ground, the more you realise that the streets themselves have been turned into defensive fortifications, the work of a paranoid dictator who fears his own people. 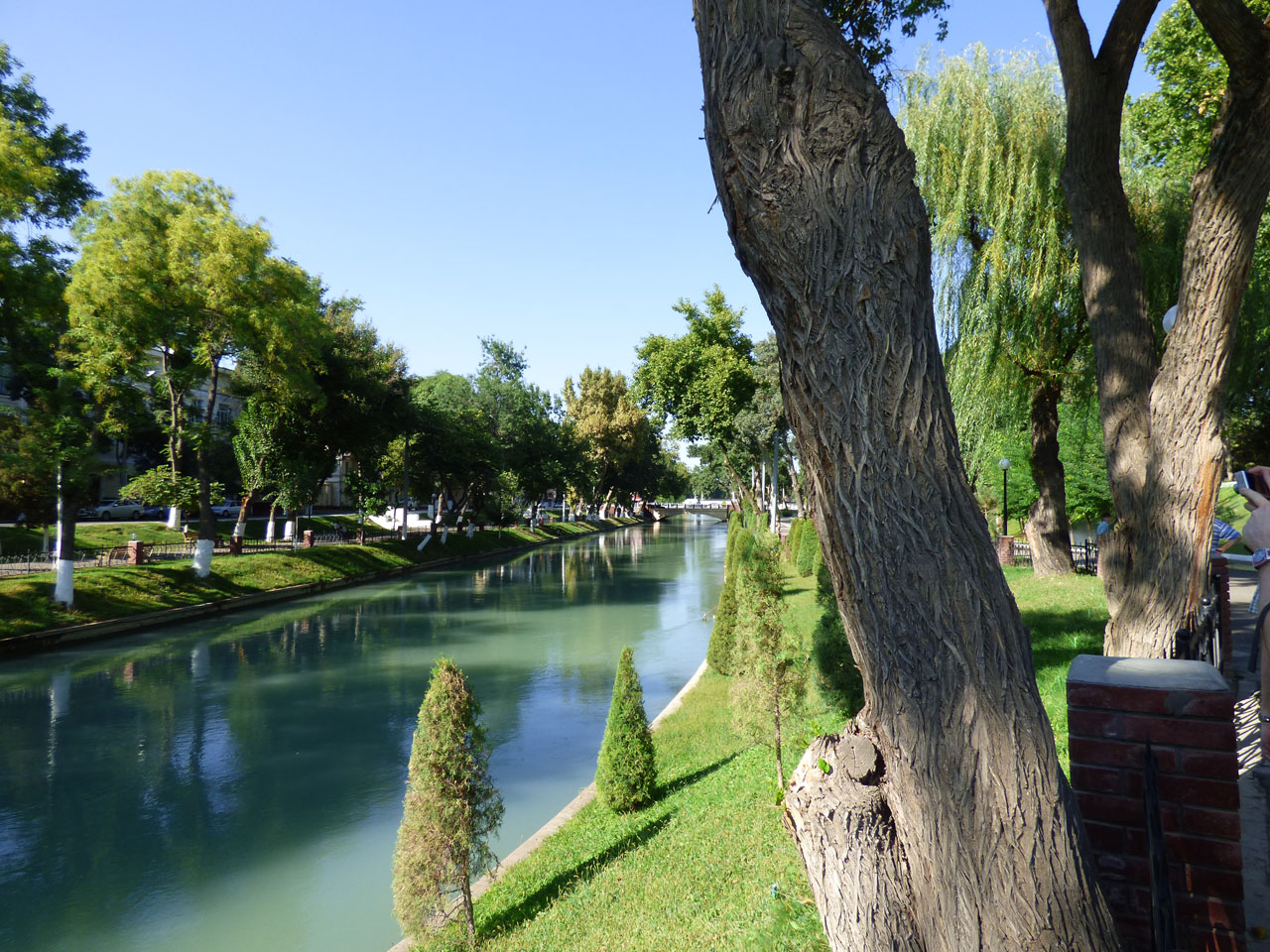 The pedestrian footpaths that converge on the huge Amir Timur Square are mostly contained behind a sturdy marble fence, which seems to have been deliberately designed to stop a large crowd of people rushing the square in the manner of Tahrir Square in Cairo, or the Maidan in Kiev. Motorcycles are banned in the city centre due to a fear of drive-by assassination attempts on Karimov, and roads in sensitive locations around the city have been turned into parks. The biggest illustration of Karimov’s paranoia is the so-called ‘President’s Road’, which his motorcade drives along as he makes his way to and from work in the city centre. This entire road is closed off to traffic twice a day, snipers are posted on the rooftops, and anyone walking along the pavement is ordered to turn their back while the president passes. If you’re foolish enough to wander into the road, you’re shot dead. 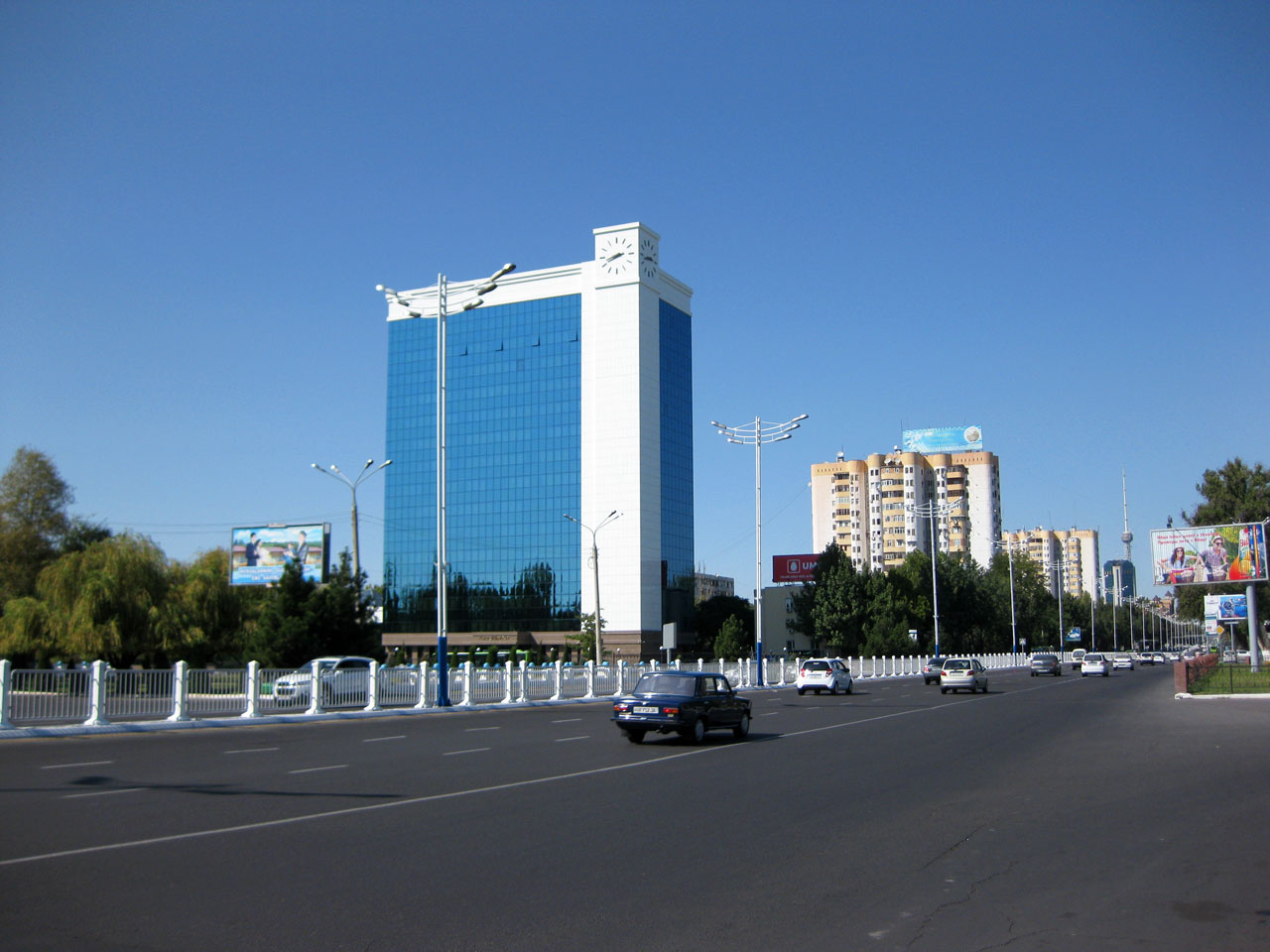 We learnt a lot about Tashkent from a couple of Polly’s friends, who’ve been living in the city for several years teaching English. They were able to give us an unvarnished account of life in Uzbekistan that you just wouldn’t get from an Uzbek tour guide, and their stories of life under Karimov’s crooked regime ranged from the absurd to the chilling. Like everyone else in Uzbekistan, they’re paid their salaries in cash, and due to the worthlessness of the national currency, the som, this means that they’re handed carrier bags literally bulging with wads of cash at the end of every month. When they go to a restaurant and pay for their meal with a debit card, they simply hand their card to the waiter and he does the rest, since everyone in Uzbekistan has the same PIN number. And when they first moved to the country, their flat was bugged and they were followed by a (not very inconspicuous) undercover policeman for three months. 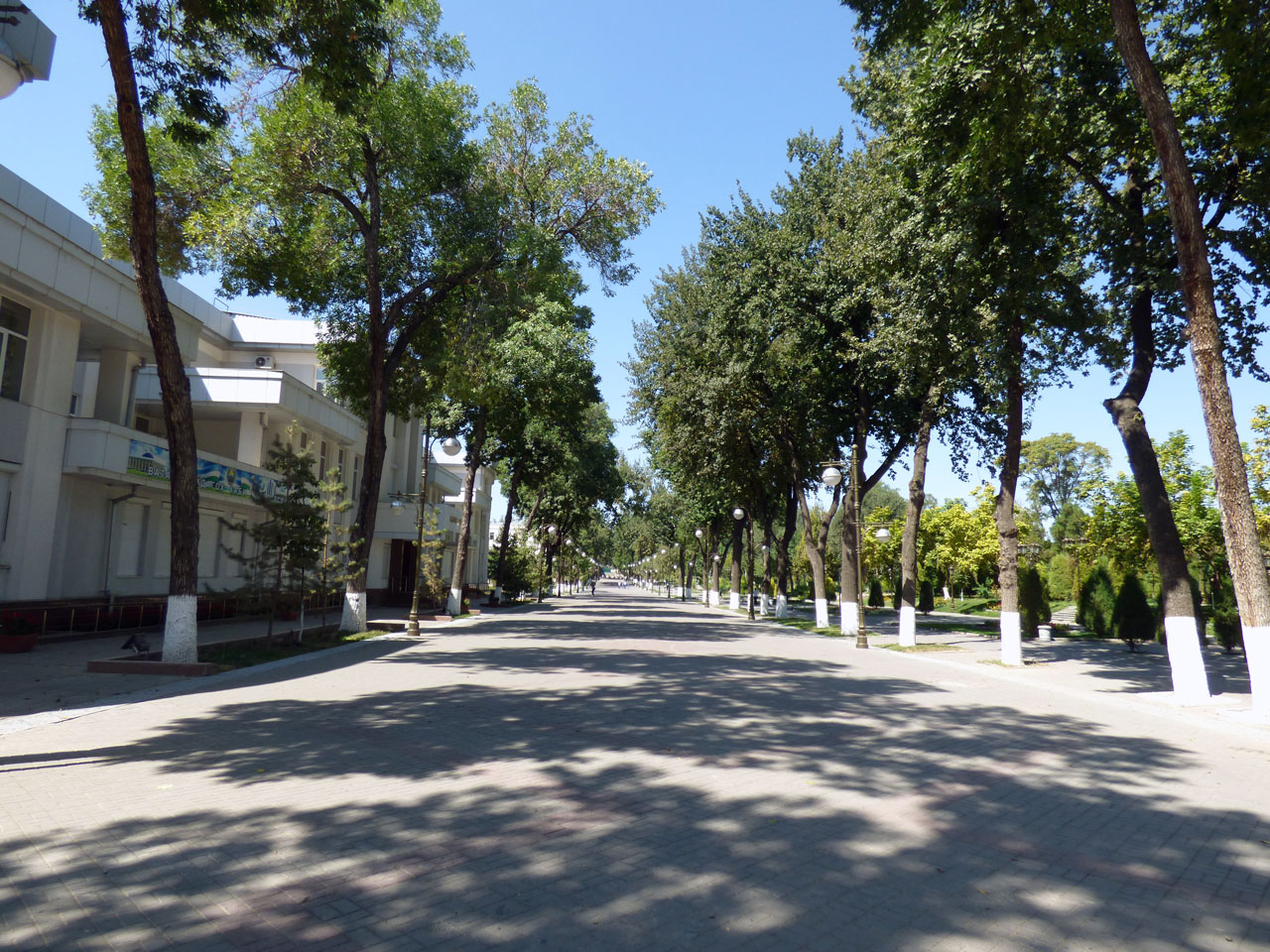 It sounds like a something from the Cold War era, and at first it was hard to reconcile this account of life in Tashkent with the seemingly relaxed city we saw around us. But after a while, you start to notice little things that unnerve you. Wide, tree-lined boulevards, which in any European city would be thronging on a summer’s evening with pensioners going for a stroll or young lovers walking arm in arm, are often completely deserted. People aren’t allowed to congregate in large groups, and the big cities in particular seemed to be stalked by a sort of silent, invisible but very tangible fear. More disturbingly, after a while you realise that you haven’t seen a single disabled person, a single drunk lurching down the street, a single homeless person or beggar; there’s no graffiti and very little litter, no signs of civil disobedience and certainly no political opposition. 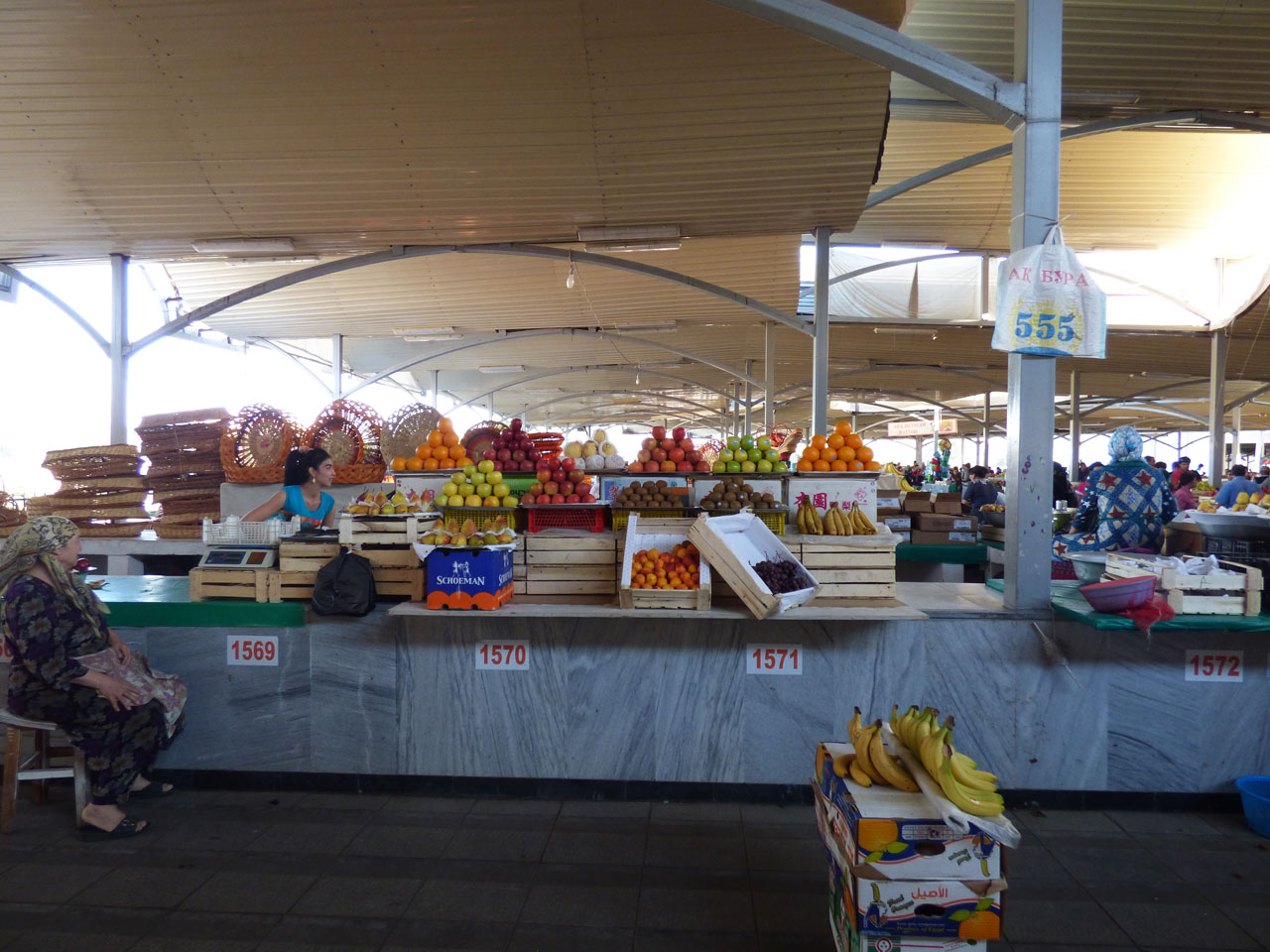 The only places in Tashkent that seemed genuinely animated were the bazaars. The biggest, Chorsu, was great for wandering around and people watching. Stall after stall was stacked high with a kaleidoscope of fresh fruit and vegetables, gold-toothed men in skullcaps invited us to inspect their huge bags of spices, and old babushkas in vibrant headscarves heaved around trolleys piled with circular loaves of bread. Bazaars in Uzbekistan sell just about everything, from old Soviet medals to sanitary towels to plastic bottles filled with dark and putrid-looking cotton oil. Amongst the Turkic and Persian faces we also saw a lot more Europeans than anywhere else in the country, mostly Russians and Ukrainians who decided to linger on after their compatriots fled in the 1990s. 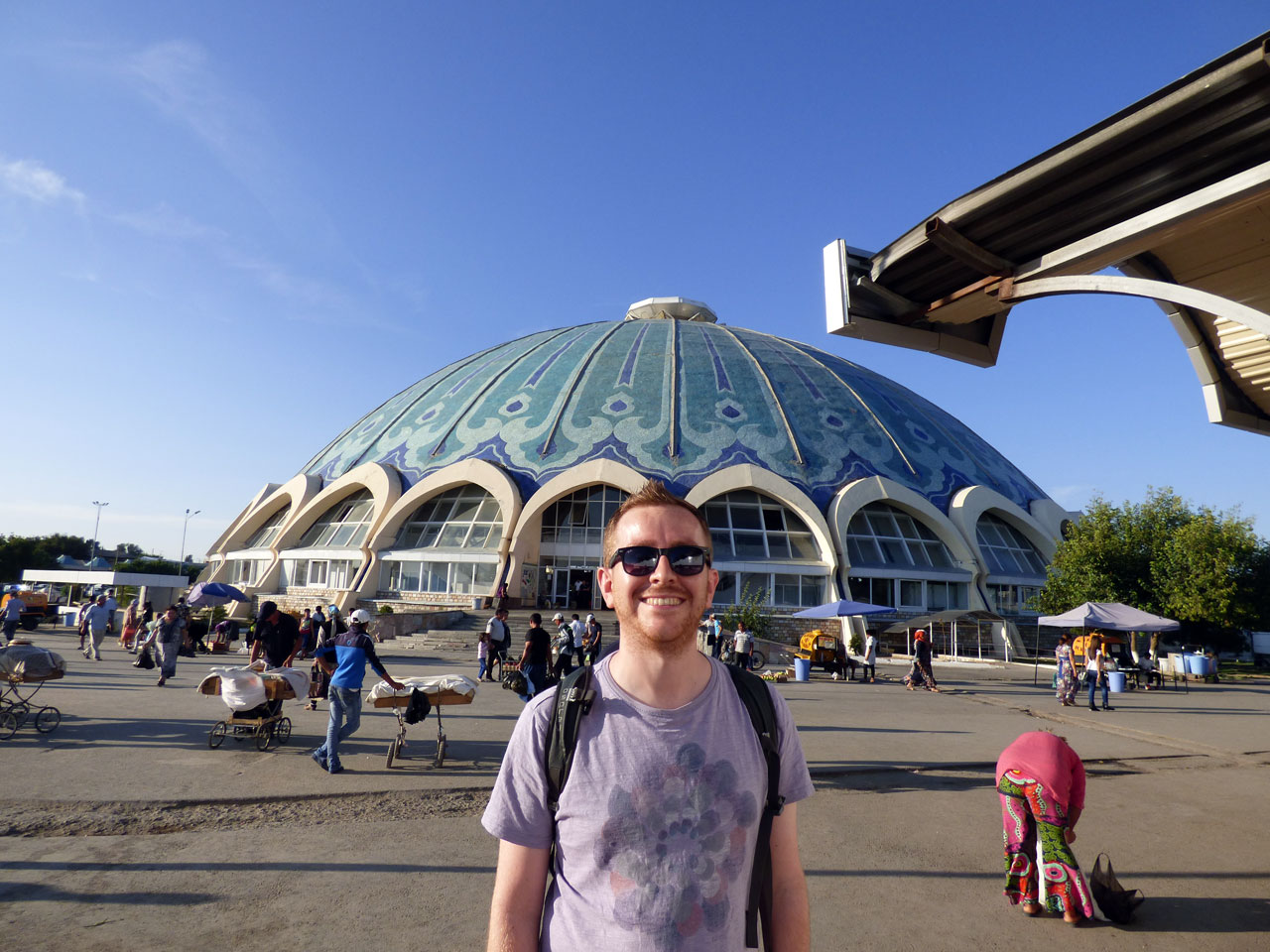 Where the bazaars felt alive and authentic, Tashkent’s modern veneer often seemed flimsy and false. Foreign businesses are virtually non-existent, thanks to the prohibitive import/export tariffs and the endemic corruption. Instead there were shops selling fake western brands like ‘Victoria’s Surprise’, or bizarre enterprises such as the fake H&M store selling genuine H&M clothes which had been purchased overseas and brought back in a suitcase. This lack of international brands isn’t such a bad thing for the foreign visitor, of course – it’s nice to visit a country free from golden arches and tax-dodging coffee chains – but I couldn’t help feeling that the regime was unnecessarily retarding its own development.

Perhaps Tashkent’s most visible manifestation of the corruption rife in Uzbekistan is the grotesque Dom Forum building on Amir Timur Square. In 2010 the hundred-year-old plane trees that used to provide the square with shade were chopped down, supposedly because Karimov wanted to make sure views of this marble monstrosity were unobstructed. More recently, however, the story of this building has taken a grimly comic turn. The building is linked to the Forum of Culture and Arts of Uzbekistan, a vehicle of Gulnara Karimova, the President’s eldest daughter and one-time heir apparent. Over the last year or so Gulnara’s relationship with her father has gone seriously sour, and she is currently reported to be under house arrest in Uzbekistan, accused of pocketing an astonishing $1bn of bribes from the telecoms industry. So now the Dom Forum stands empty, fenced off and rarely used, tainted by its association with the President’s wayward daughter. As a symbol of the Karimov family it’s pretty apposite, symbolising as it does their corruption, their petty feuding and the way in which they continue to squander the nation’s wealth on absurd vanity projects. 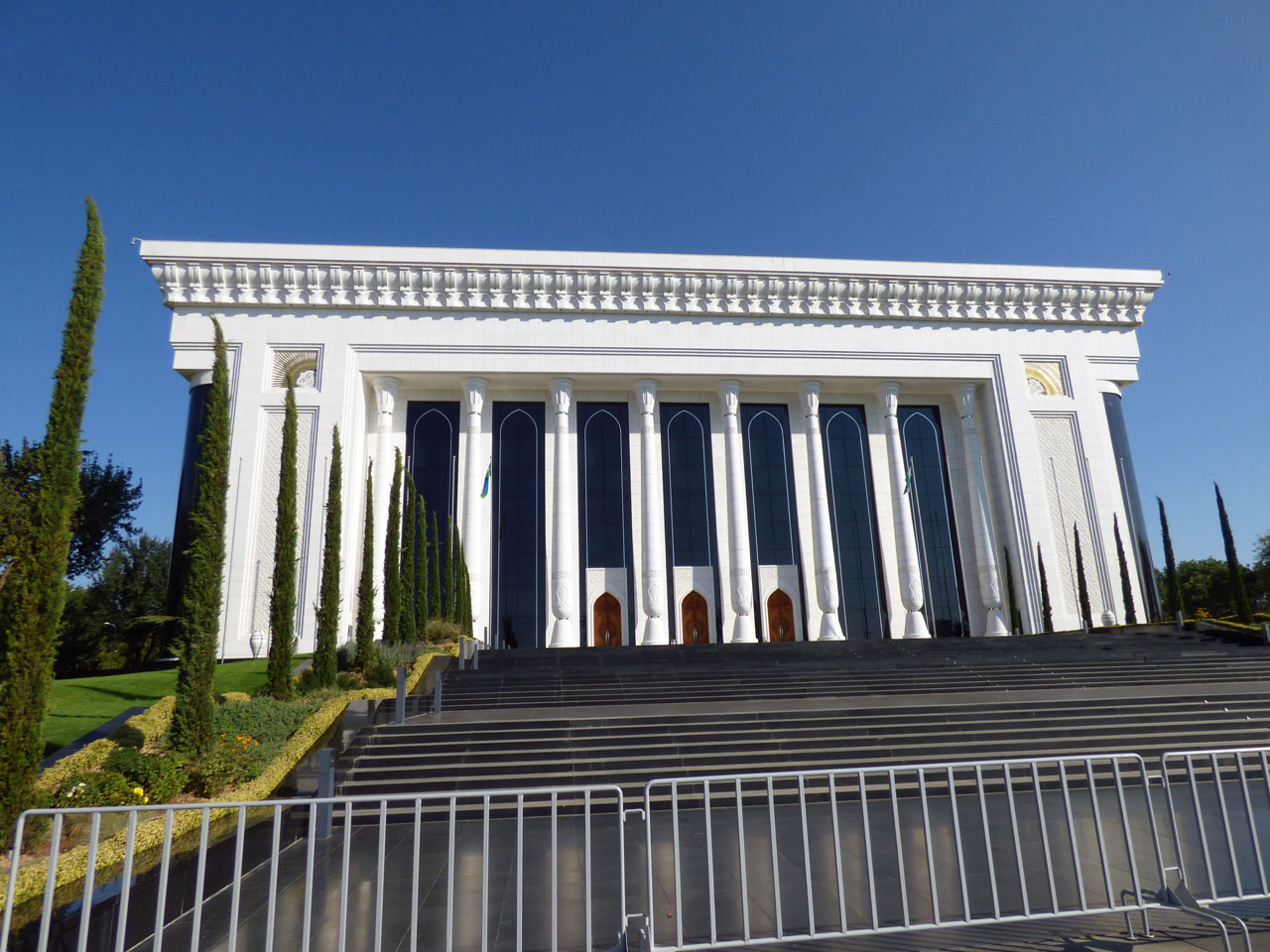 Tashkent was both the first and last stop on our trip around Uzbekistan, and my opinion of it had evolved considerably after travelling to Khiva and back. Away from the capital, the grip of Karimov’s police state felt looser, the streets less heavily militarised, the people less fearful. I have no doubt that this was largely an illusion, but in Tashkent the apparatus of the state just seemed to be more in-your-face, growing denser as we neared the epicentre of the President’s paranoia.

The big worry, however, is what happens next in Uzbekistan. Karimov is 77 years old and said to be in poor health, with no obvious successor. The justification he has often used for his harsh methods is the fear of infiltration by Islamic fundamentalists, who continue to wage insurgent warfare in neighbouring Afghanistan. As we travelled around Uzbekistan, it felt improbable that political Islam could ever take hold amongst a people with such a laissez-faire attitude towards their religion, but admittedly we didn’t visit the Fergana Valley, the country’s most populous and most conservative region. Here, fundamentalism has a foothold, as it does over the border in the increasingly unstable republic of Tajikistan. Significant numbers of Central Asians are reported to have travelled to Syria to fight for the Islamic State, and the parlous state of the Uzbek economy risks driving others towards extremist ways of thinking.

I hope, for the sake of all the lovely people we met in Uzbekistan, that sanity prevails. As we left the country, I found myself reciprocating the sentiments of the slightly alarming sign that greets you outside Tashkent airport, which reads, simply:

La Palma, one of the lesser known Canary Islands, seems at first glance as if it must be a piece of the Caribbean that’s come loose, a wayward isle that has somehow

If you’ve only ever heard of one place in Central Asia, it’s probably Samarkand. This ancient city, one of the most important stops on the old Silk Road, once shared the