Our driver, a surly and uncommunicative brute of a man, lit another cigarette, cradling his mobile phone between ear and shoulder as he swung out into the path of the oncoming traffic. The engine growled and strained as he accelerated past the car in front, before ducking back into the right hand lane just as we reached the apex of another blind bend and a lorry thundered past in the opposite direction. We all winced. Back in Sofia it had seemed like a good idea to hire this taxi after our bus had failed to show up, but at this rate we’d be lucky to make it out of Bulgaria in one piece.

At the border the Macedonian police peered into the car and quizzed us on what we were doing, where we’d come from and where we going. Evidently they were suspicious of our chain-smoking chauffeur, but they let us on our way, and we motored on towards Skopje, hurtling along breathtaking mountain roads past battered old Ladas and trundling Yugos.

On arrival in Skopje, our driver decided that the price agreed in Sofia had now gone up. We told him we’d paid him what we owed and tried to walk away, but he was having none of it, and started pursuing us down the street, shouting at us.

Ever eager to avoid confrontation, I eventually caved in and offered him a few euros in change, which he grudgingly accepted. We said goodbye to the German couple we’d shared our white knuckle ride with, and we jumped in another taxi to the main square, Ploshtad Makedonija, where we checked into our apartment before heading out to explore the city. 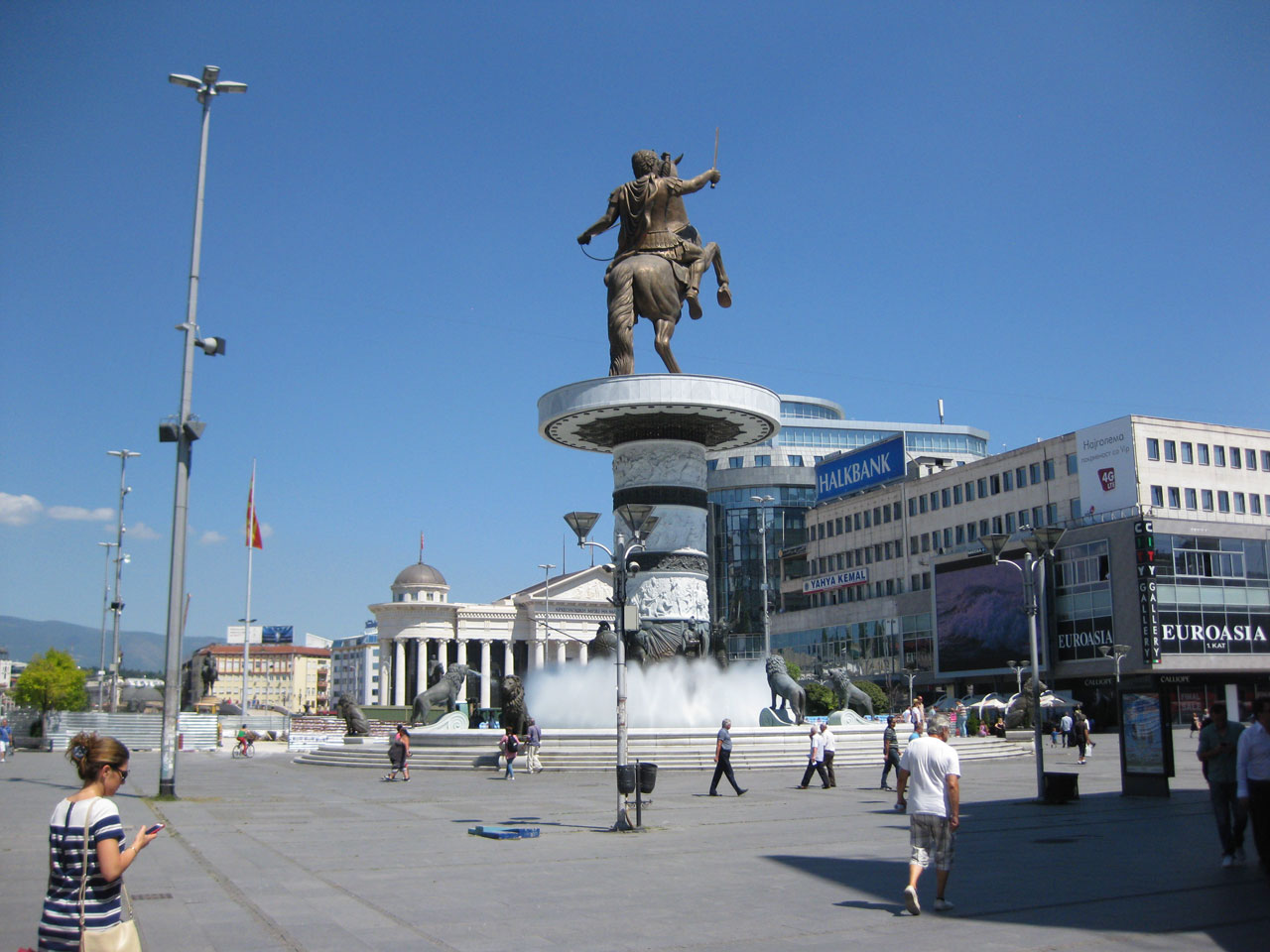 Central Skopje sparkles with an unexpected lustre, the grandiose main square leading down to a pleasant riverfront promenade that runs along the west bank of the Vardar. In fact the gleaming marble of the neo-Classical buildings and the burnished bronze statuary is a little too pristine, and the majority of these monuments are actually very recent additions. A controversial building spree has seen the government pump a lot of money into smartening up what was, by all accounts, a pretty drab Eastern bloc city up until a few years ago, and it’s hard not to feel that they may have gone a little overboard. I’ve honestly never seen so many statues in my life: every building, every wall and every bridge along the riverfront seemed to be absolutely covered in the things. 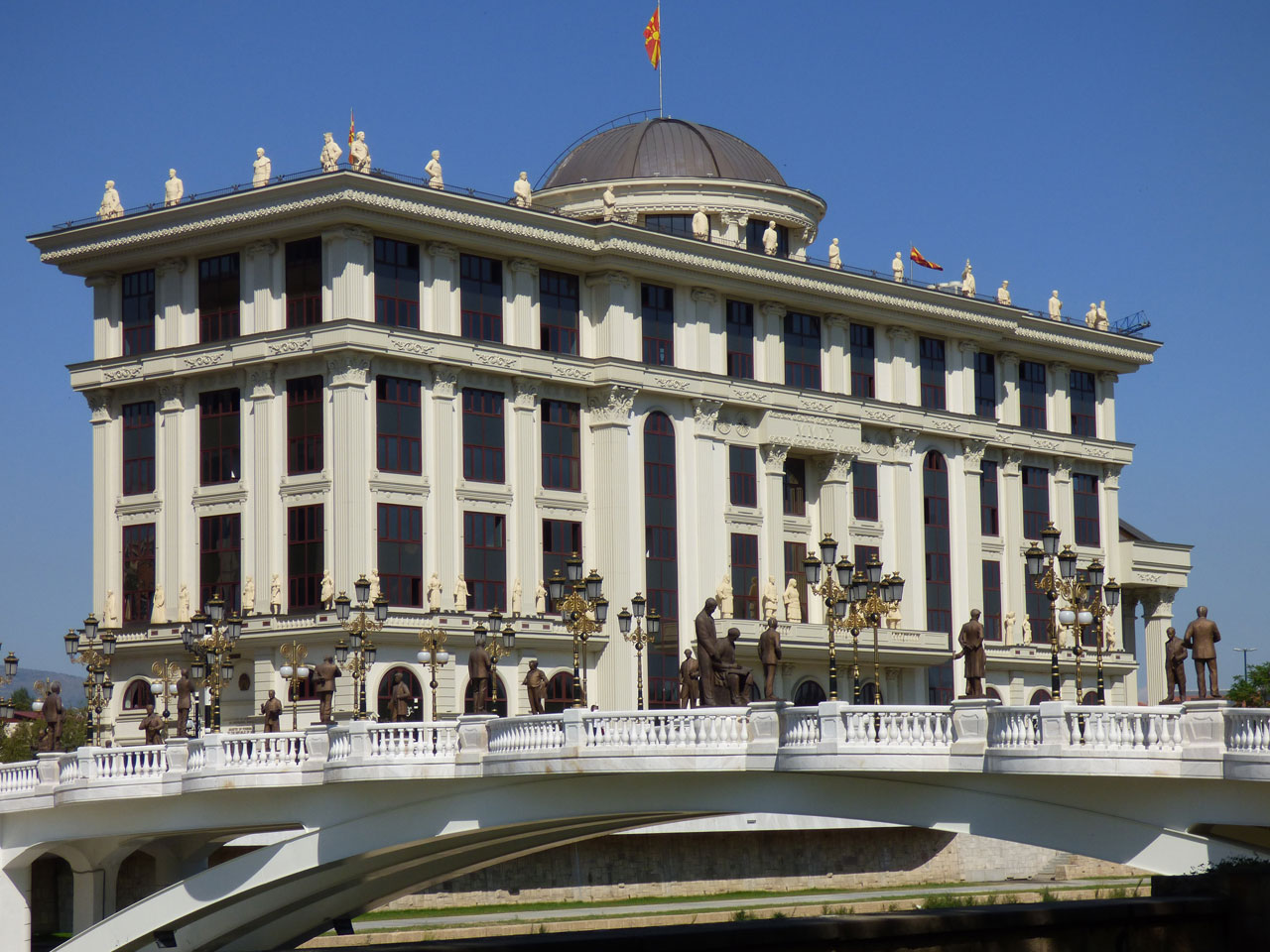 Crossing Kameni Most, the stone bridge that spans the river, we reached the old Turkish bazaar, the Čaršija, a rather more authentic quarter where minarets poke out above the cobbled streets and the shops sell everything from traditional carpets to tacky tourist jewellery. Skopje was first captured by the Turks in 1392, remaining under their control for most of the next 520 years, and this part of the city still has a tangible Ottoman feel to it. 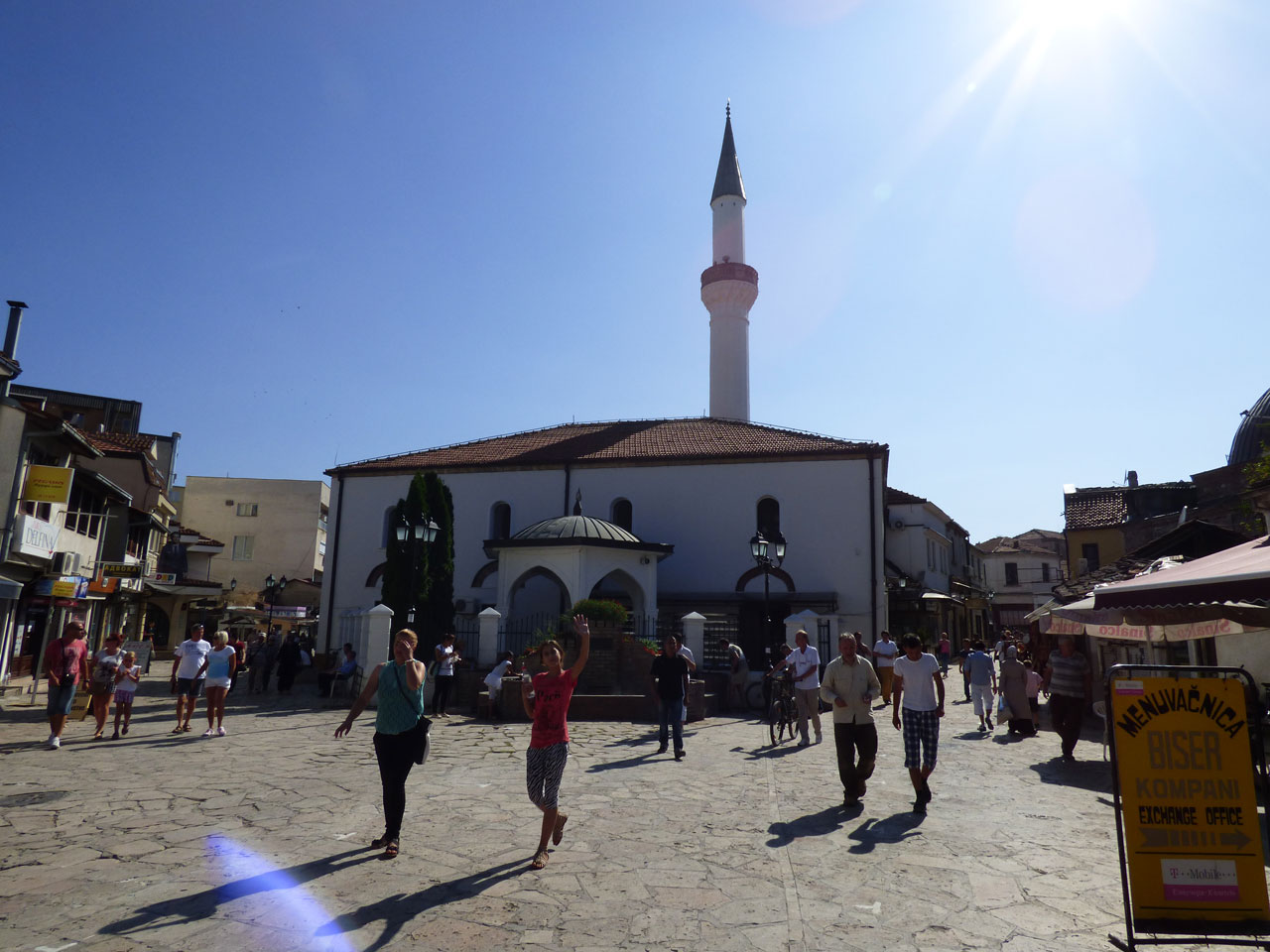 We climbed the hill behind the Čaršija up to the Kale fortress, a brooding structure that dates back even further, originally built by the Byzantines in the 6th century. From the top the views unfurled beyond the city limits to the edges of the surrounding countryside, where pine green mountains sat shimmering in the August heat. Skopje may not be the most beautiful city in the world, but the setting is certainly spectacular, and we were a little sad that we couldn’t spend more time here. We had intended to stay two nights in the city, but thanks to a mix-up at Luton Airport the previous day we had missed our flight here, which is how we’d come to end up taking a detour via Bulgaria.

Now the sun was already going down on our fleeting visit to the Macedonian capital, and it was time to think about moving on once again. 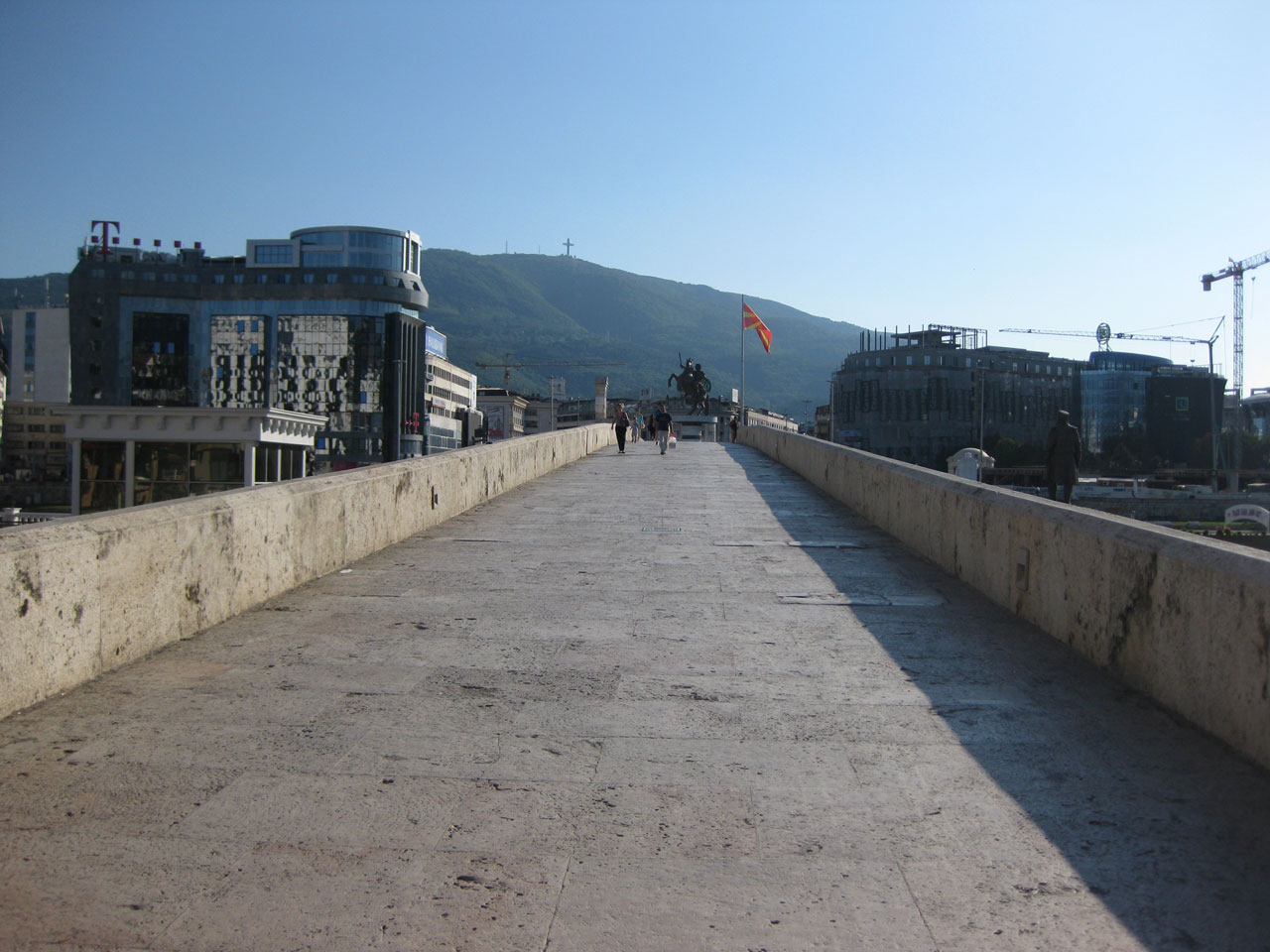 Albania is a fascinating place, quite unlike anywhere else I’ve been in Europe. Having suffered years of isolation and hardship under a particularly harsh dictatorship, nowadays this friendly country is rapidly developing

The Shard is, depending on who you ask, a visionary addition to the skyline of a dynamic 21st century metropolis, or a vulgar display of Qatari oil wealth that’s out of kilter