The Macedonian city of Ohrid sits on the lake of the same name, a vast expanse of impossibly blue water that straddles the mountainous border with Albania. I was immediately struck by the seaside feel of the place, a little unexpected given that Macedonia is a landlocked country, the nearest saltwater some 150 miles to the west. Ohrid’s medieval old town, a warren of cobblestoned streets and Byzantine churches, tumbles down a hill towards the rocky shores of the lake, and it was one of the real highlights of our trip around the Balkans. 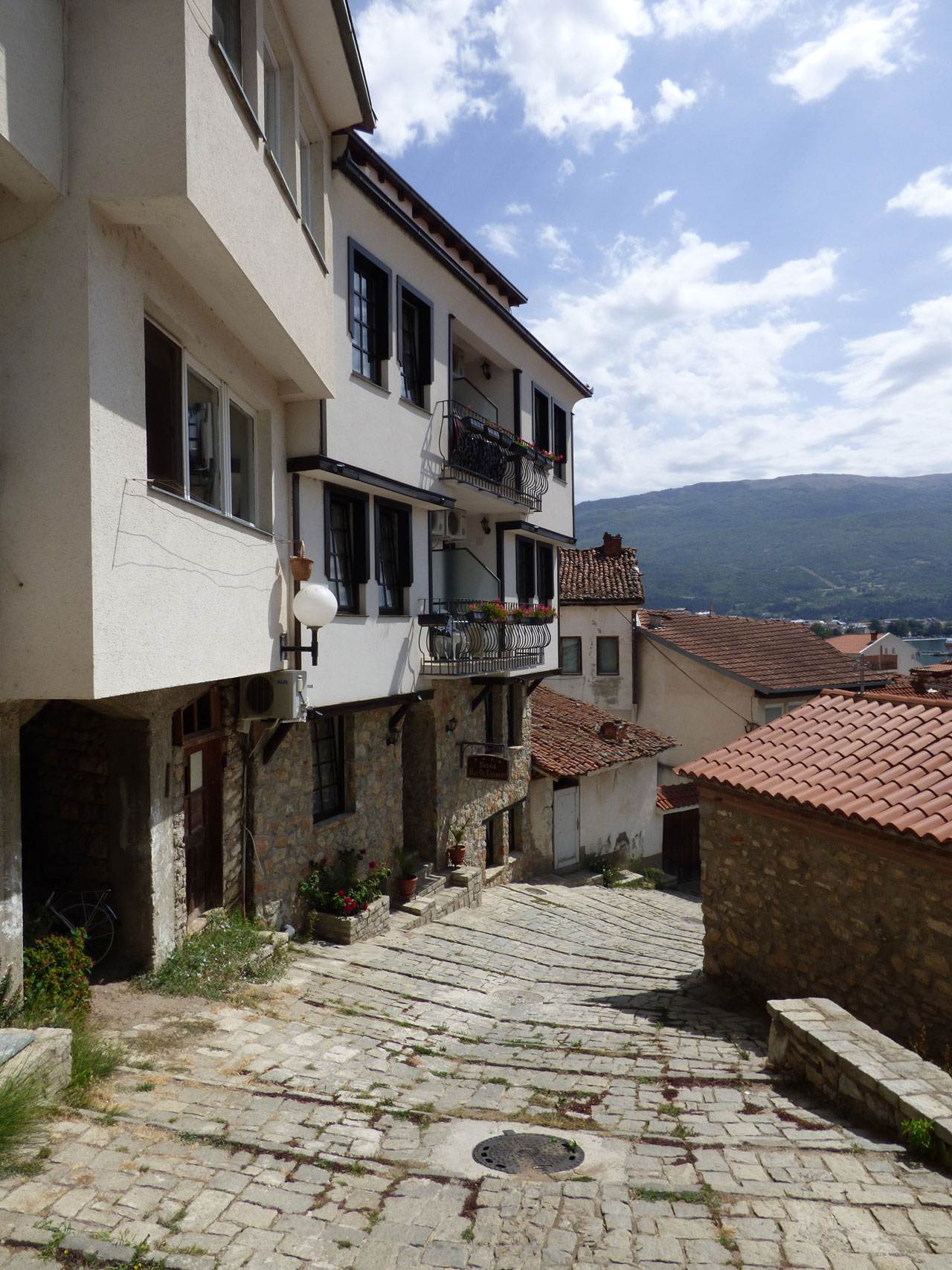 Although touristy by Macedonian standards, the town still felt undiscovered and unspoilt, even at the height of summer. We barely heard a single British accent, and most of of our fellow tourists seemed to be from Holland, Belgium or Macedonia’s Balkan neighbours; I even saw a couple of cars with Ukrainian number plates. We spent our first full day in Ohrid stretched out on one of the town’s beaches, a steep, pebbly bank covered in rapidly pinkening Slavic flesh. Even here, in one of Europe’s more far-flung corners, the baffling continental penchant for the men’s Speedo swim pant is alive and well, but the water was clear and refreshingly cool, and it was great to finally relax after a frantic first few days of our trip, when we had ended up in Bulgaria by mistake. 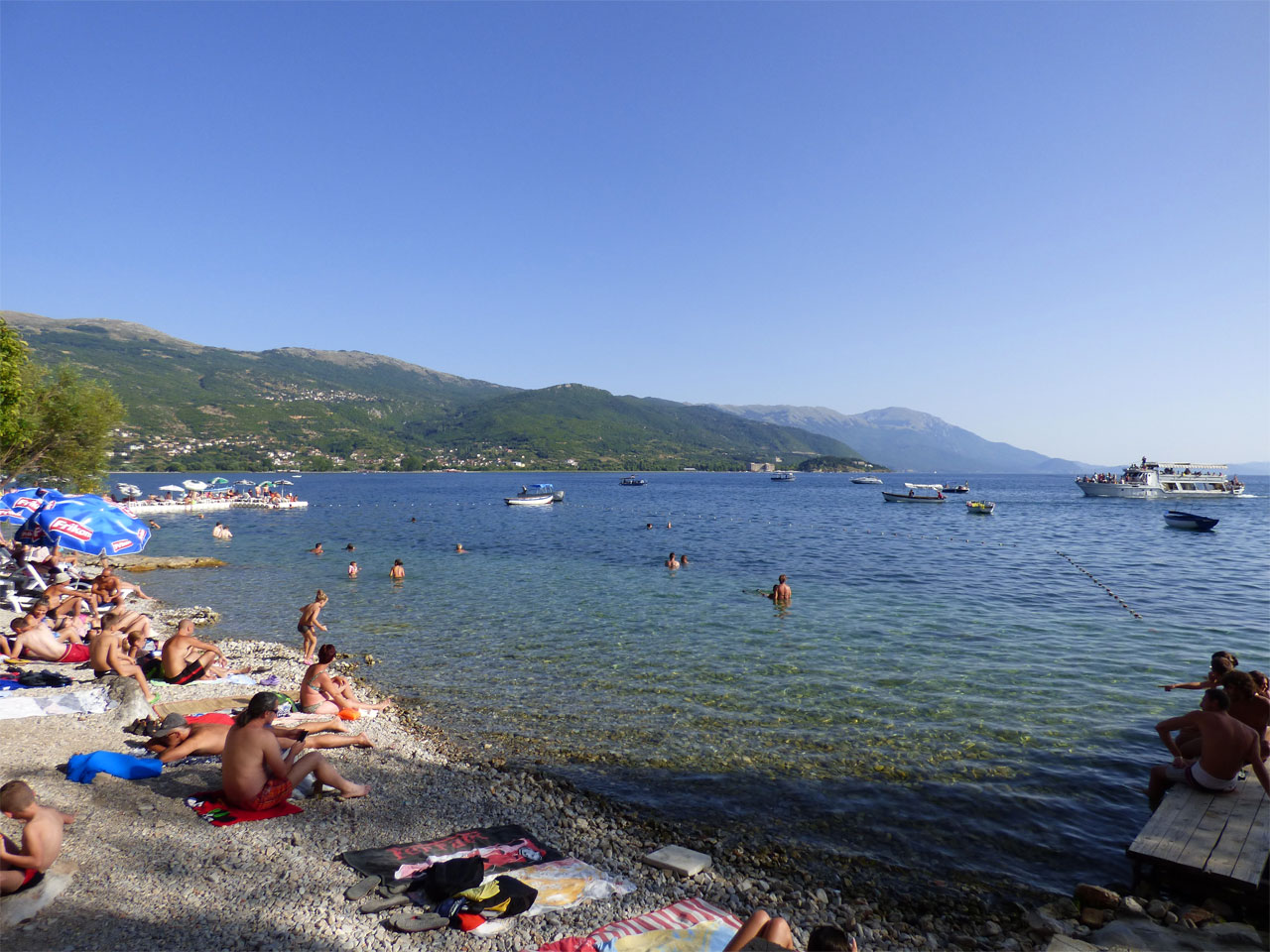 The old town itself is fairly small, so it didn’t take us long to learn our way around. There seems to be a church hiding around every corner, most of them built in the Byzantine style with little domes and turrets, and the top-heavy townhouses that overhang the streets are unmistakably Ottoman in their design. We made our way up a steep road to the top of the hill, which is dominated by the imposing fortress of Tsar Samuil, ruler of the Bulgarian Empire from 997 to 1014 AD. A sweaty ascent of the ramparts in the midday sun was rewarded with panoramic views of the city, the lake and the mountains of Albania in the distance. 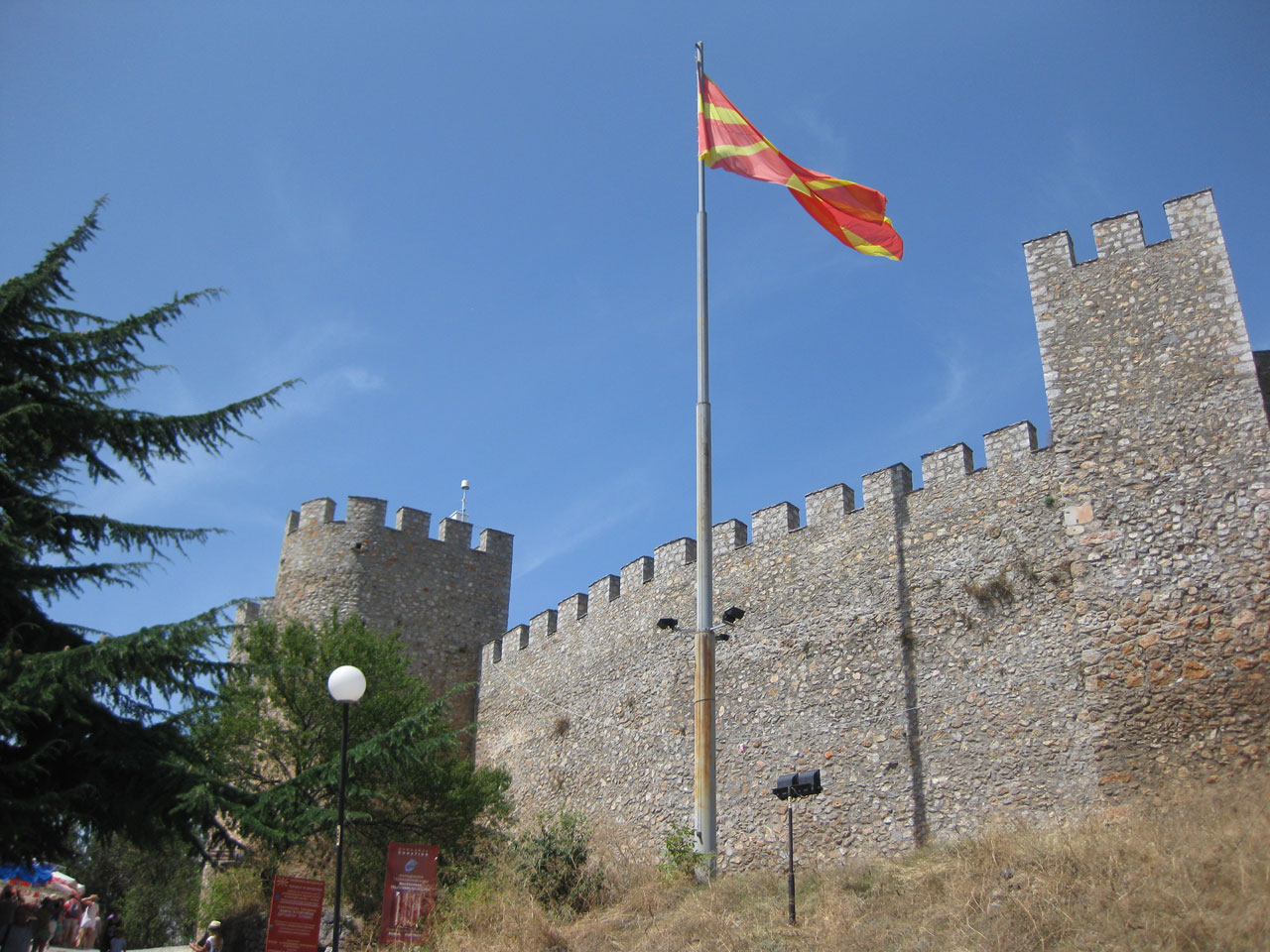 Ohrid occupies an important place in the history of the Slavic people; it was here that Saint Clement is said to have devised the Cyrillic alphabet, the writing system used in much of the Balkans, the Russian-speaking world and beyond. Perhaps Ohrid’s most iconic historical site, however, is the 13th century church of Sveti Jovan Kaneo, which stands on a promontory looking out across the lake. This being the Balkans, there are no namby-pamby safety railings, and you can tiptoe right to the edge of the cliffs and stare down into the deep indigo of the lake, just as the medieval Macedonian monks would once have done as they pondered God, the universe and the meaning of life. 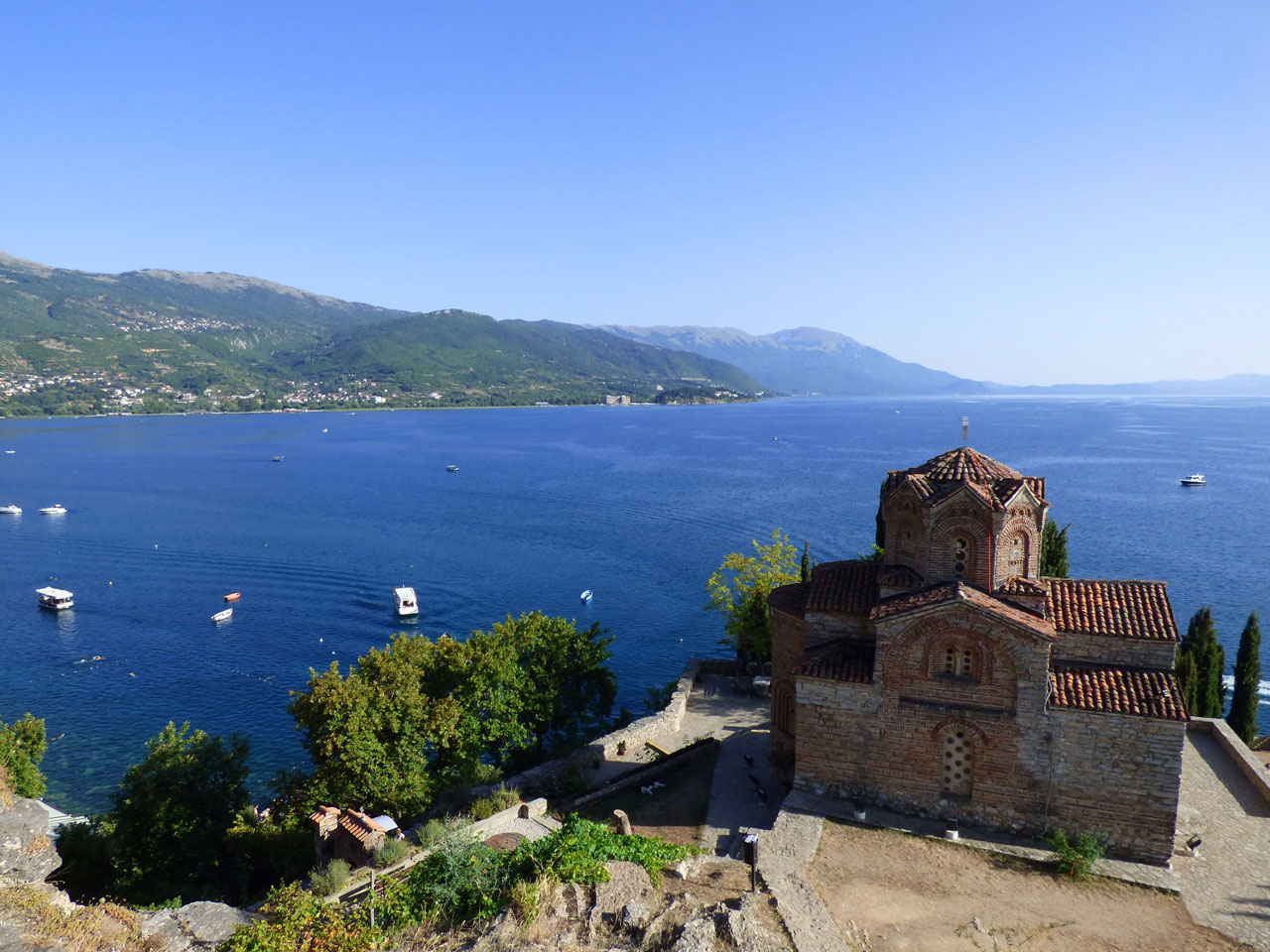 Ohrid isn’t all about quiet contemplation and profound existential questions, however, with plenty of lively bars and restaurants along the lakeside, many with a wooden deck that sits right above the water. There is also a bazaar of sorts, a long street flanked by shops selling all the normal tat you’d see on a Mediterranean holiday: fake football shirts, fake designer handbags, ‘local’ souvenirs that were probably made in China. There were also, for reasons still unknown to me, three girls sat by the side of the road with live snakes coiled around their necks, all three of them looking incredibly bored. 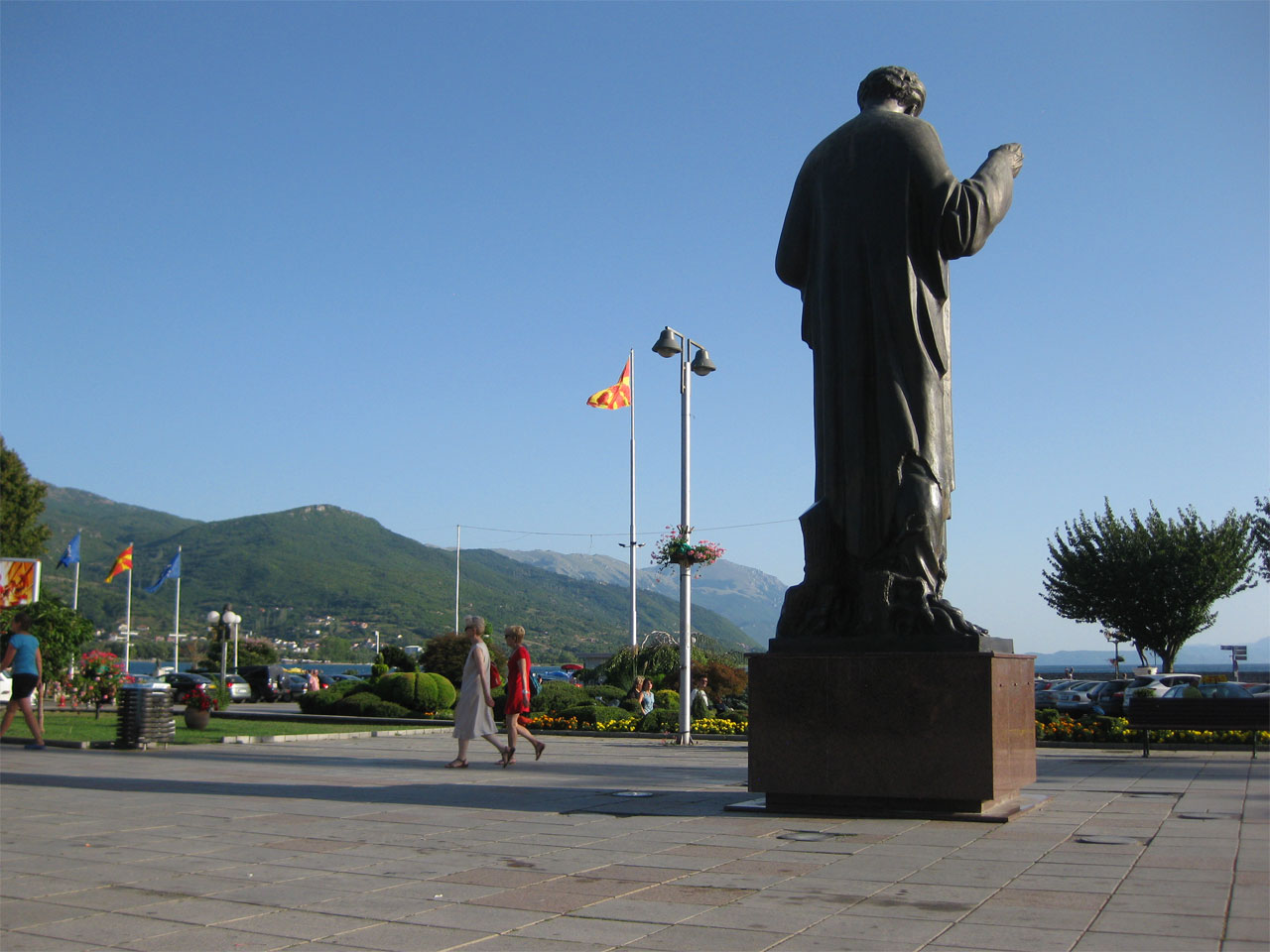 The central Sveti Kliment square, at the southern end of the bazaar, is where you’ll find most of the captains-for-hire who loiter around the little harbour trying to cajole you into their boat. We decided to take a trip out on the water on our last day, so we negotiated a ride with a Speedo-clad sailor, who took us on a small loop of the northeastern corner of the lake in his incredibly slow and rather precarious little boat, insisting that I drive for a bit while he took pictures. 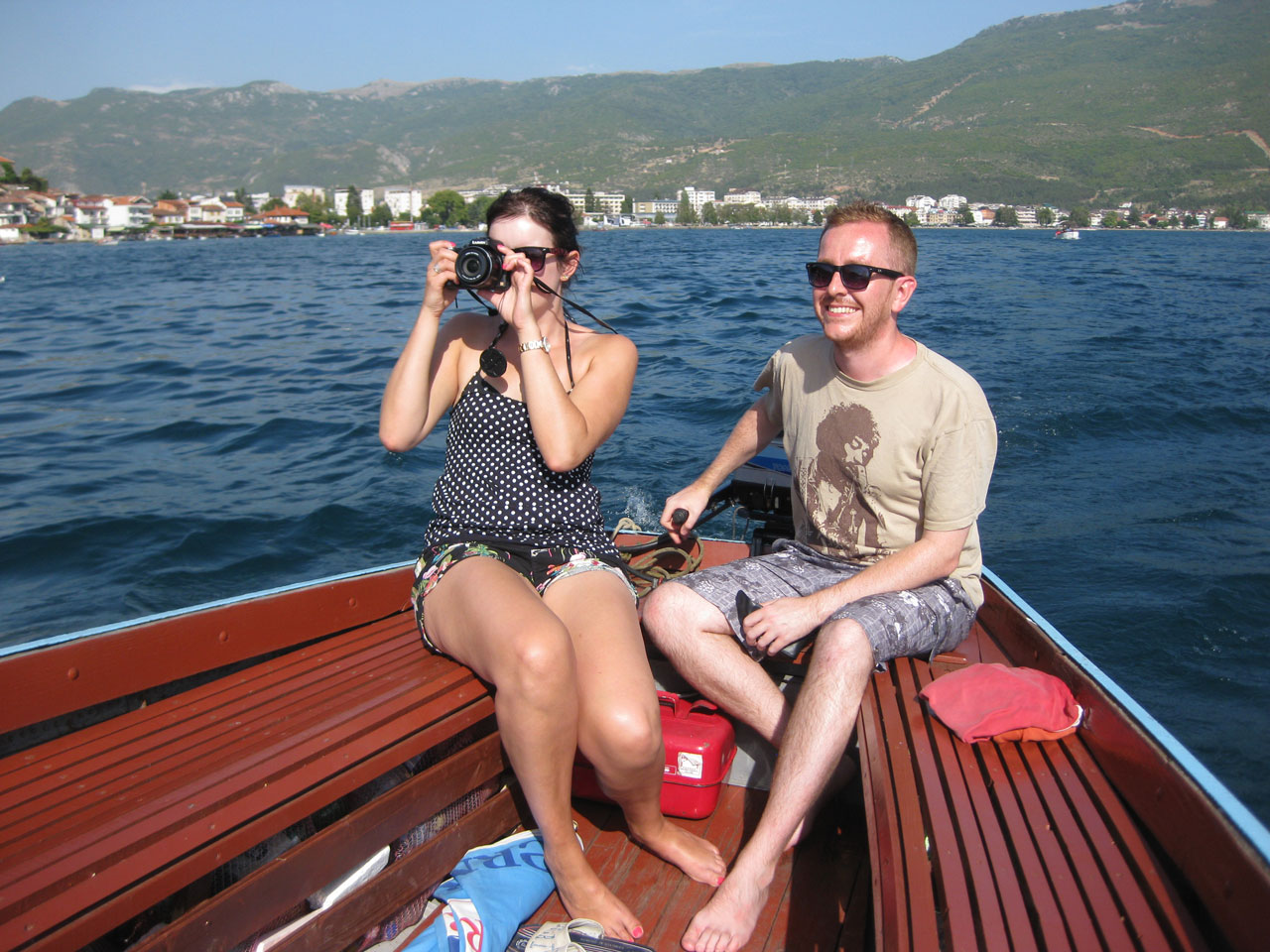 As we chugged pathetically around the lake, he quizzed us on our trip, asking us where we’d been, where we were going next, why on earth we would want to spend three whole days in Tirana, and in particular how much money we were paying for everything. To us, our jaunt around the Balkans was a relatively cheap way of having a two week holiday in the sun, but for him I suppose it sounded like a pretty extravagant itinerary. He was an entertaining and somewhat eccentric companion, quoting Hemingway, warning us of the “catastrophe” that awaited us in pricey Dubrovnik, and gleefully shouting “Poseidon!” when the wind started churning up the lake and bouncing the boat perilously from side to side. Thankfully we made it back to the shore safely, where he dumped us on a concrete jetty, before sailing off, incredibly slowly, into the distance. 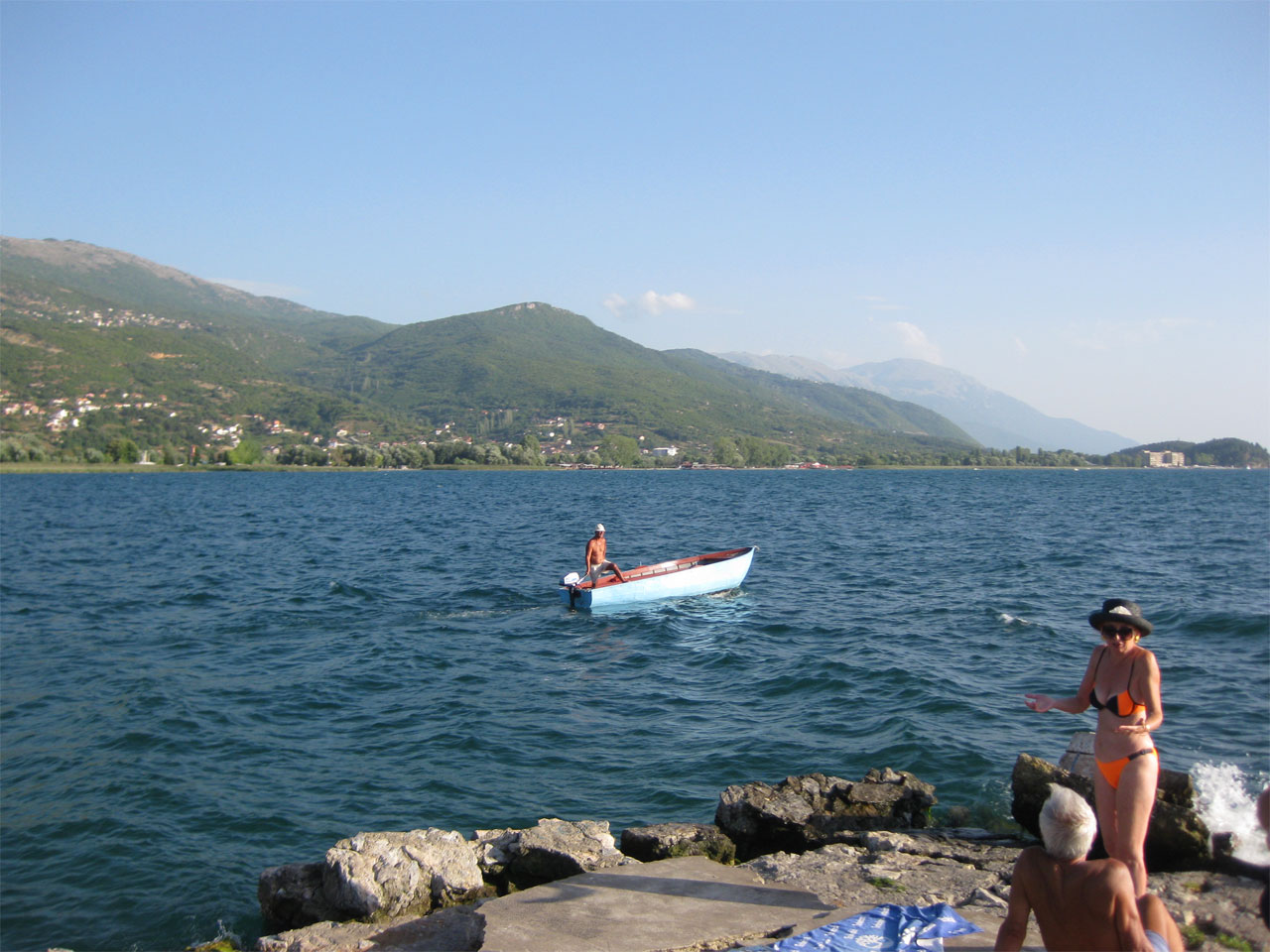 It was an aerial photo of the Bay of Kotor that first really piqued my interest in Montenegro, and I’m sure many other travellers have been lured here in the same way.

When you live in London it’s easy to take your surroundings for granted. I’ve lived here for five and a half years and I still haven’t been to some of

Not Here
—
On the shores of Lake Ohrid
Share this