The row of drivers yelled out their destinations in staccato bursts, eyeing us hopefully as we walked hesitantly towards where their minibuses were parked, along the edge of the sprawling Zogu i Zi roundabout.

We were looking for a ride to Krujë, a town 20 miles to the north of [Tirana](GHOST_URL/welcome-to-tirana/" target="_blank), and our hotel receptionist had told us to come to this roundabout and ask around until we found a furgon, one of the battered, privately owned minibuses that pass for inter-city transport in Albania.

It took us a while but eventually we found a van parked in a shady alleyway behind a petrol station, with a handwritten cardboard sign for Krujë in the front window, so we got in and waited for the seats to fill up. Once we set off it soon became clear that this was very much a ‘hop on, hop off’ service, stopping every few hundred metres as we crawled along the road out of Tirana. At one point there were so many passengers crammed in that some were standing up, bent double due to the lack of headroom, and the driver had a unique mechanism for closing the side door after each pick-up, accelerating then slamming on the brakes so that the door slid violently shut. 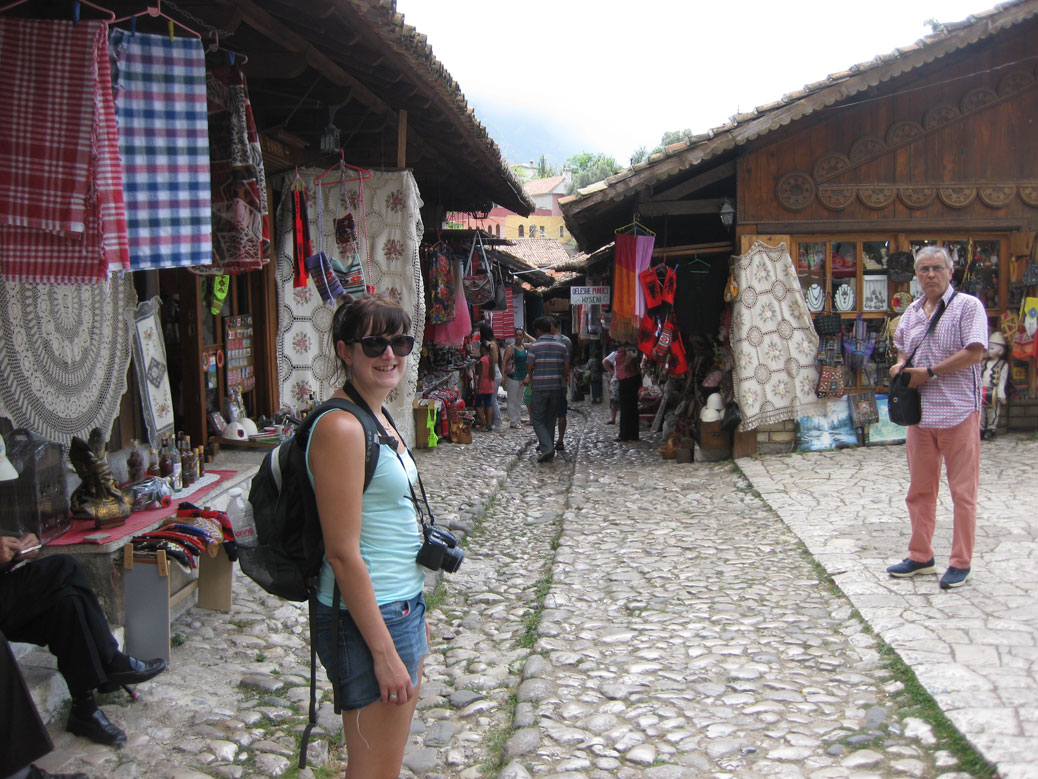 Krujë is the birthplace of Skanderbeg, Albania’s national hero, and it was the only part of Albania we visited that felt at all geared up for tourists. The cobbled bazaar was lined by shops selling communist memorabilia, hand-woven rugs and every kind of Skanderbeg souvenir imaginable: Skanderbeg mugs, Skanderbeg ashtrays, even Skanderbeg brandy. There were also lots of vendors selling ‘silver’ jewellery, who made a big show of weighing each trinket on their digital scales before quoting a price, and there was a café where I managed to lock myself in an exceedingly grim squat toilet for three terrifying minutes, before a waiter came to my rescue, much to my excruciating embarrassment. 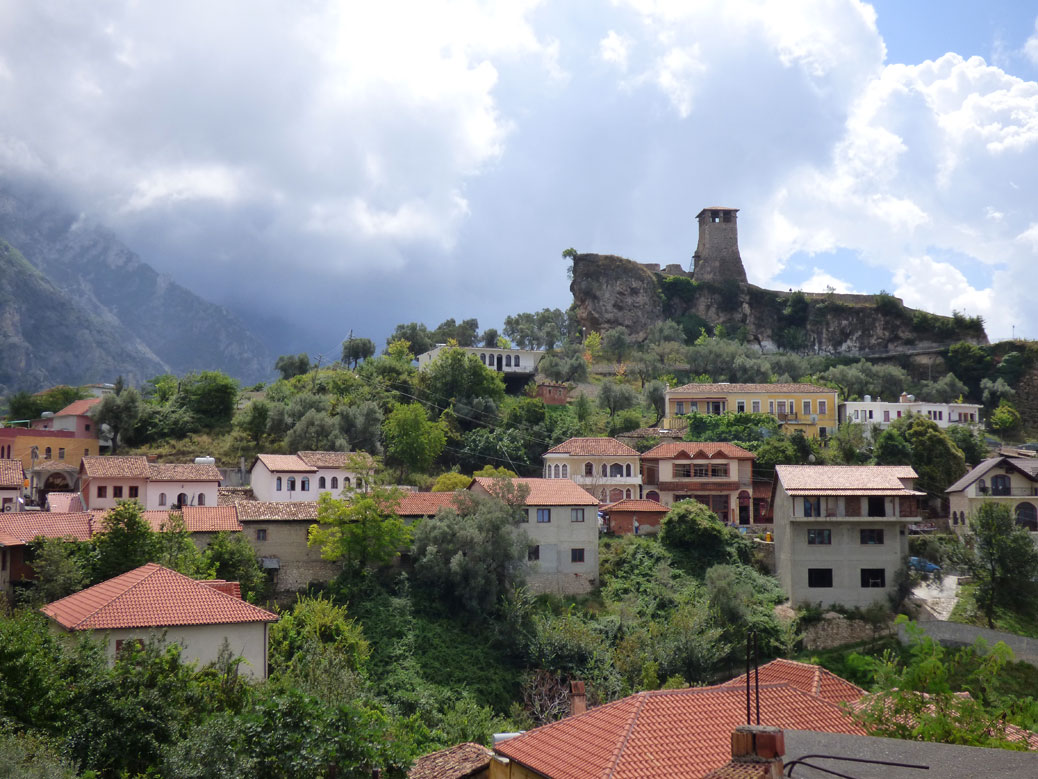 The bazaar winds its way up to the castle that crowns the hilltop, and there are actually still people living within the castle walls, which is something I’d never seen before. The castle also houses the Skanderbeg Museum, a multi-storey shrine to Krujë’s most famous son, though it’s not a particularly rewarding experience if you don’t speak Albanian. Skanderbeg, real name Gjergj Kastrioti, was a soldier in the Ottoman army who led a rebellion against the Turks, and was a constant thorn in their side until his death in 1468. The endless portraits and statues of the big man quickly became tedious, but then I guess you have to remember that Albania’s national identity, and indeed its existence as a modern nation state, is bound up with this one man in a way that can be hard to relate to as an outsider. We certainly don’t have that same sort of definitive ‘father of the nation’ figure in Britain; it’s something more akin to Gandhi in India, or Kemal Atatürk in Turkey. 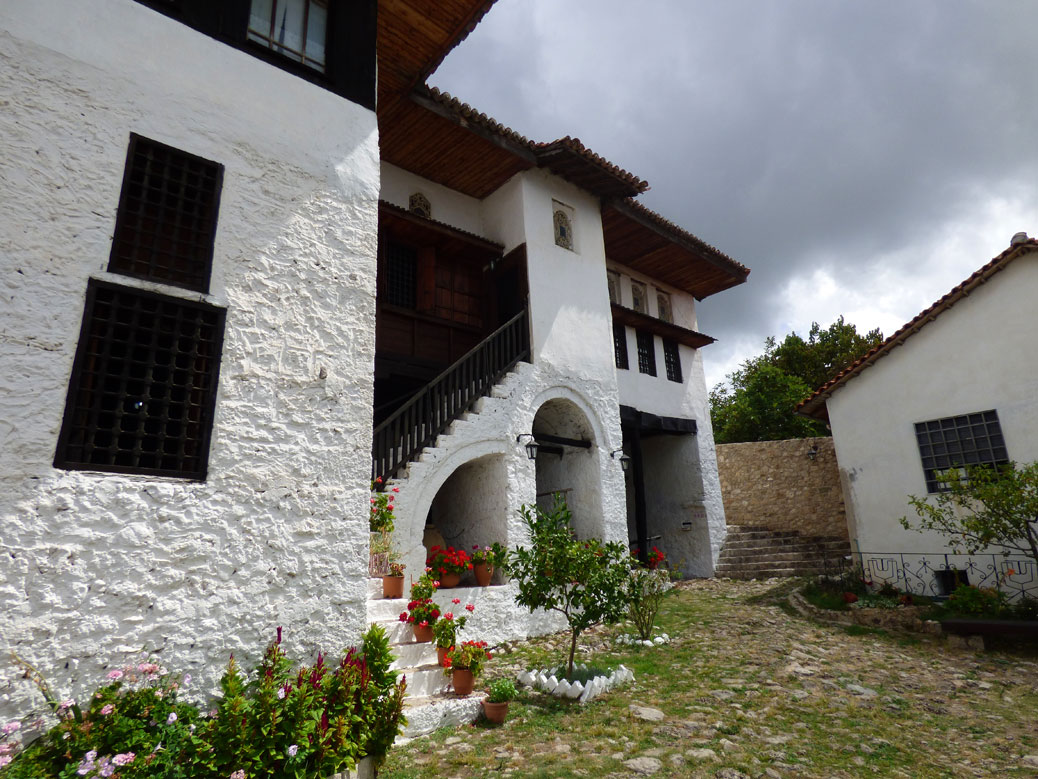 Much more interesting in my opinion was the Ethnographic Museum, a preserved 19th century house that gives you a real flavour of what life was like for the well-off family that lived here. The influence of the Ottomans, who ruled Albania for over 500 years, is very obvious, from the traditional clothing on display to the hammam at the rear of the house. We also had a look round a teqe, a type of mosque peculiar to the Bektashi order of Islam, a Sufi sect that is particularly prevalent in Albania. The guardian was a very friendly chap, and despite the fact that he didn’t speak any English he did his best to tell us about the history of the building and the *babas *whose photos adorned the walls, our stilted conversation proceeding in a sort of cod Italian. 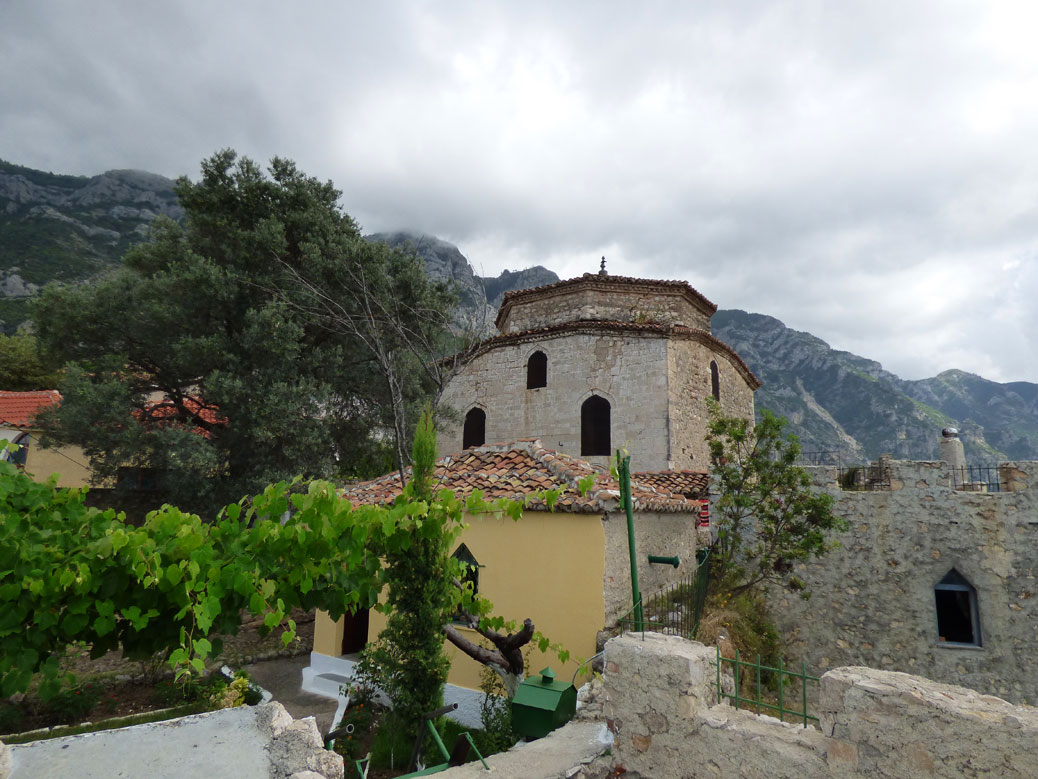 After a hearty lunch we wandered back through the bazaar and found another furgon that we thought was going to Fushë Krujë, the town at the bottom of the hill where most of the buses back to Tirana depart from. Instead, the driver abruptly terminated his route at the bottom of a motorway sliproad. He barked something at us in a mixture of Albanian and Italian, which I didn’t really understand, then motioned for us to get out of the bus.

“Er… Autobus per Tirana?” I asked him, a little confused as to what was going on.

He nodded his head, which in Albania normally means ‘no’, but could also have meant ‘yes’ if he was familiar with western cultural norms, and he muttered something about Tirana and the autostrada, which I knew meant ‘motorway’ in Italian. Unsure what else we could do other than trust that he’d brought us to a legitimate bus stop, we paid him, got out, and then watched him speed off. 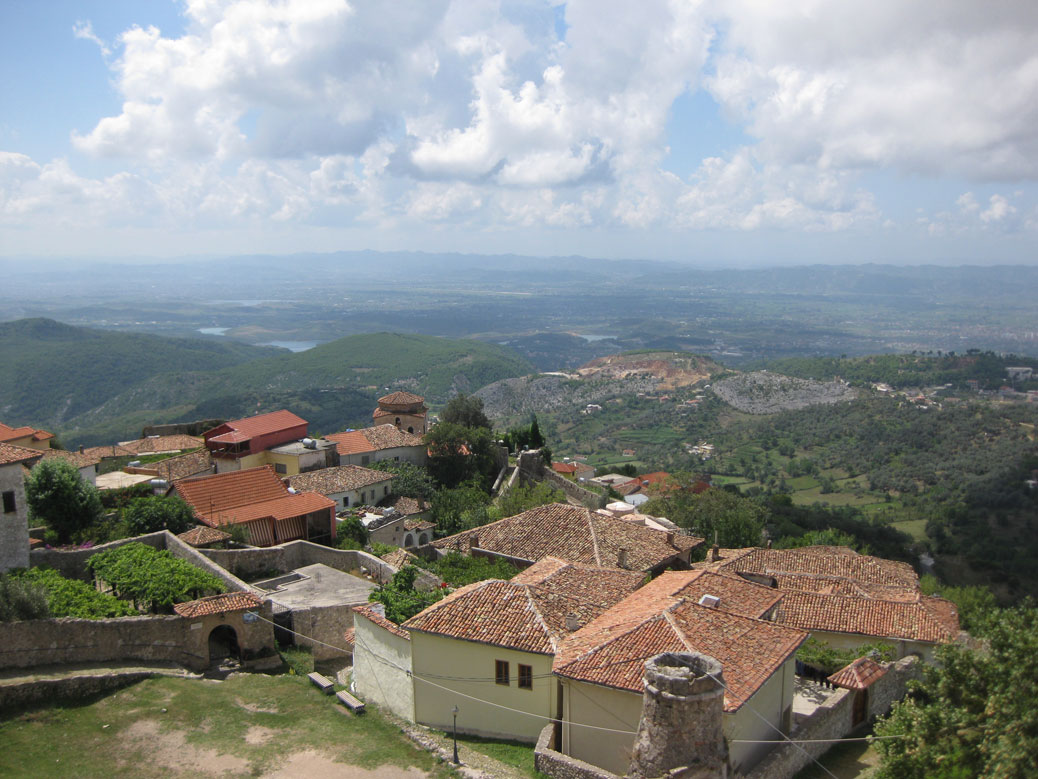 It was the middle of afternoon and the sun was blazing, with little in the way of shelter by the roadside. As we tentatively made our way up the embankment towards the main drag we noticed two old men and a younger woman heading in the same direction, so we asked them for help. They didn’t speak any English, but beckoned us to follow them, and they led us across the main road to a gravel lay-by. It wasn’t long before a Tirana-bound minibus came to a halt at the side of the road, and we all jumped in. Once we arrived back in the capital our new friends took it upon themselves to make sure that we were dropped off in the centre of town, and we waved goodbye as we disembarked near the Zogu i Zi roundabout in something of a daze. Not for the first time, the kindness of strangers had helped us find our way in this wonderfully confusing country. 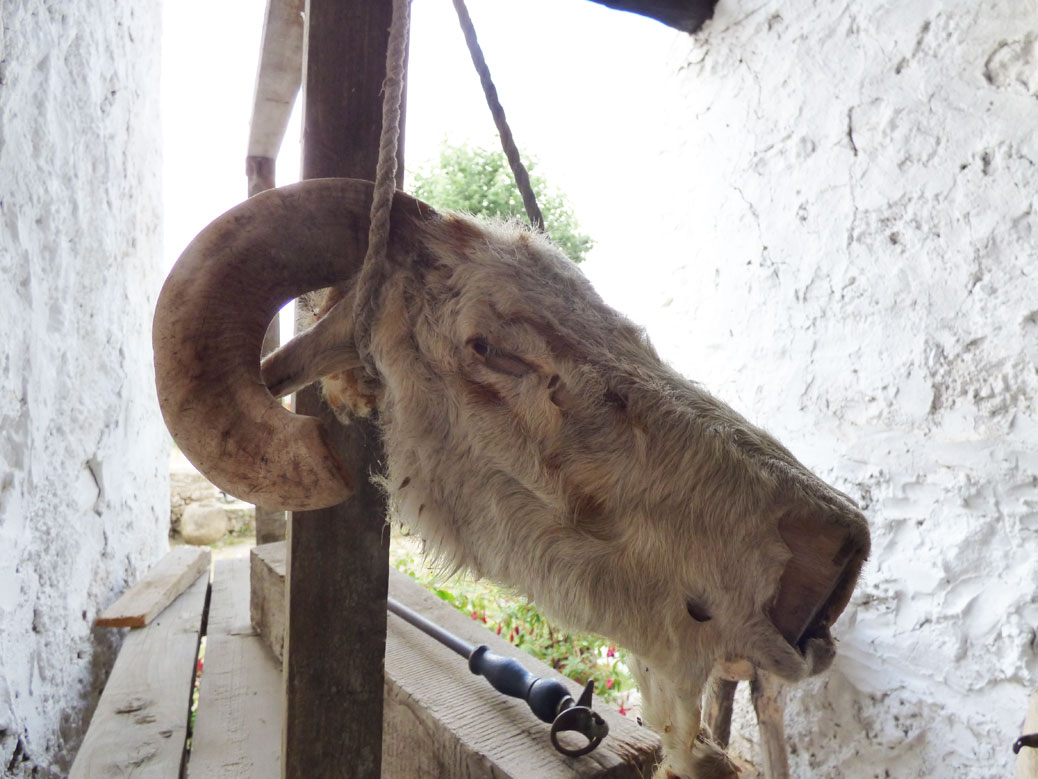 It was only a couple of weeks into December, but already Riga was bitterly cold. The Daugava river had begun to freeze around the edges, and the air stung my ears, numbed my

It was an aerial photo of the Bay of Kotor that first really piqued my interest in Montenegro, and I’m sure many other travellers have been lured here in the same way.