Belgium is home to some 180 breweries, producing hundreds of different beers in myriad styles and strengths. A typical pub offers the adventurous drinker a choice of cloudy wheat beers with a hint of coriander, fruity farmhouse-style saisons, lemon-sour lambic beers, foaming golden ales and deceptively strong Trappist brews, to name but a few. The most obvious place to start is whatever the locals are drinking, and in Antwerp, Belgium’s second city, this is usually De Koninck, a malty amber ale that’s brewed locally. But asking for a De Koninck is a surefire way to mark yourself out as a tourist; the locals call it een bolleke, a reference to the bowl-shaped glass in which it’s served. 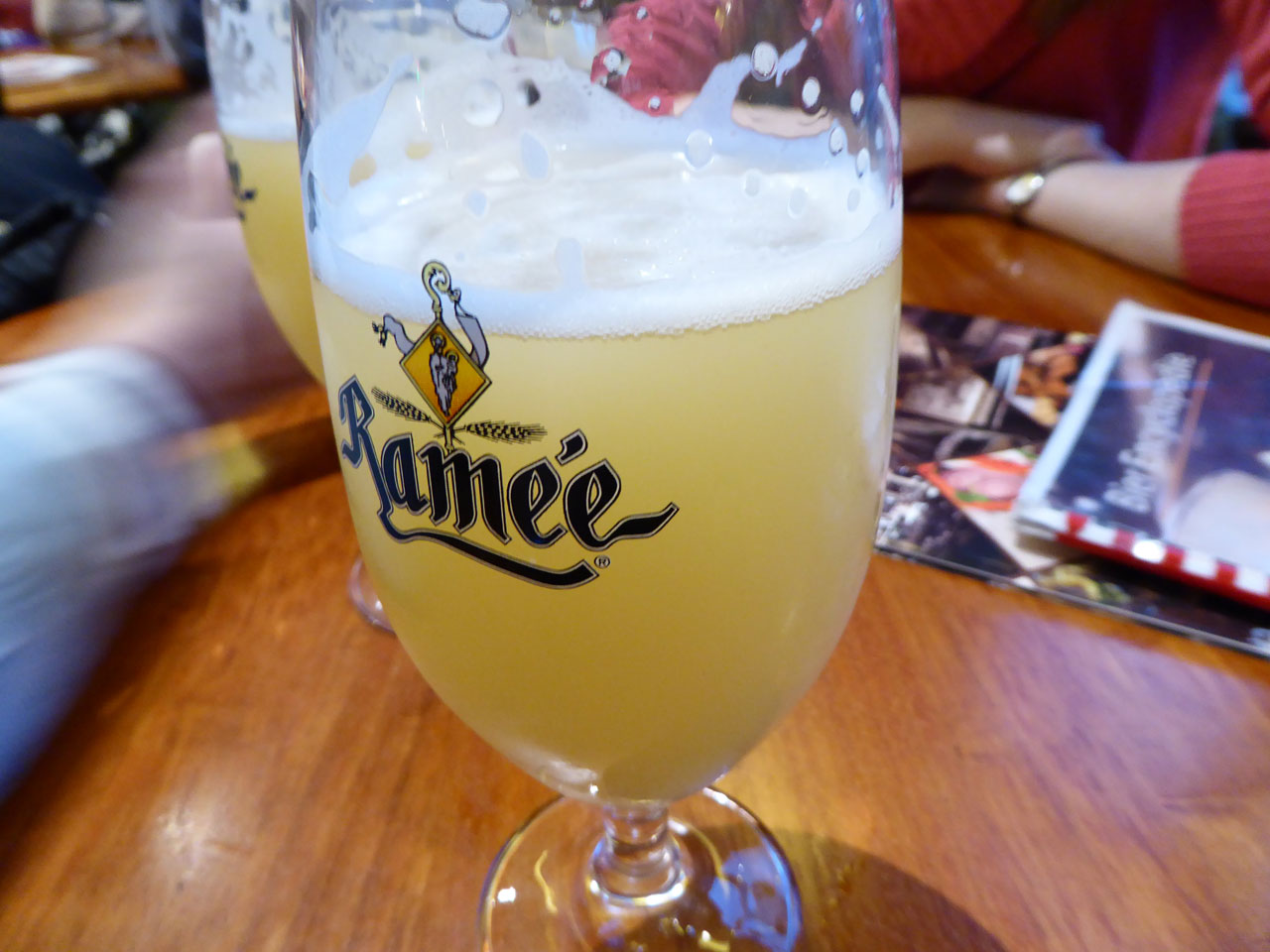 Our first night in Antwerp, drinking and chatting with the friends who we’d come to visit, inevitably spilled over into the hours beyond midnight, and when we emerged from the cosy warmth of the pub we found ourselves on a chilly street where the trams had stopped running. The walk back to our hotel took us along a road parallel with the main inter-city railway line, on the eastern edge of the city’s Jewish quarter. Instead of drunks staggering home, we mostly saw families with young children out walking, dressed in the distinctive garb of the ultra-orthodox Haredi community; the women in long skirts and wigs, the boys with their hair in ringlets, and the men sporting the shtreimel, a wide, circular fur hat worn on the Sabbath. 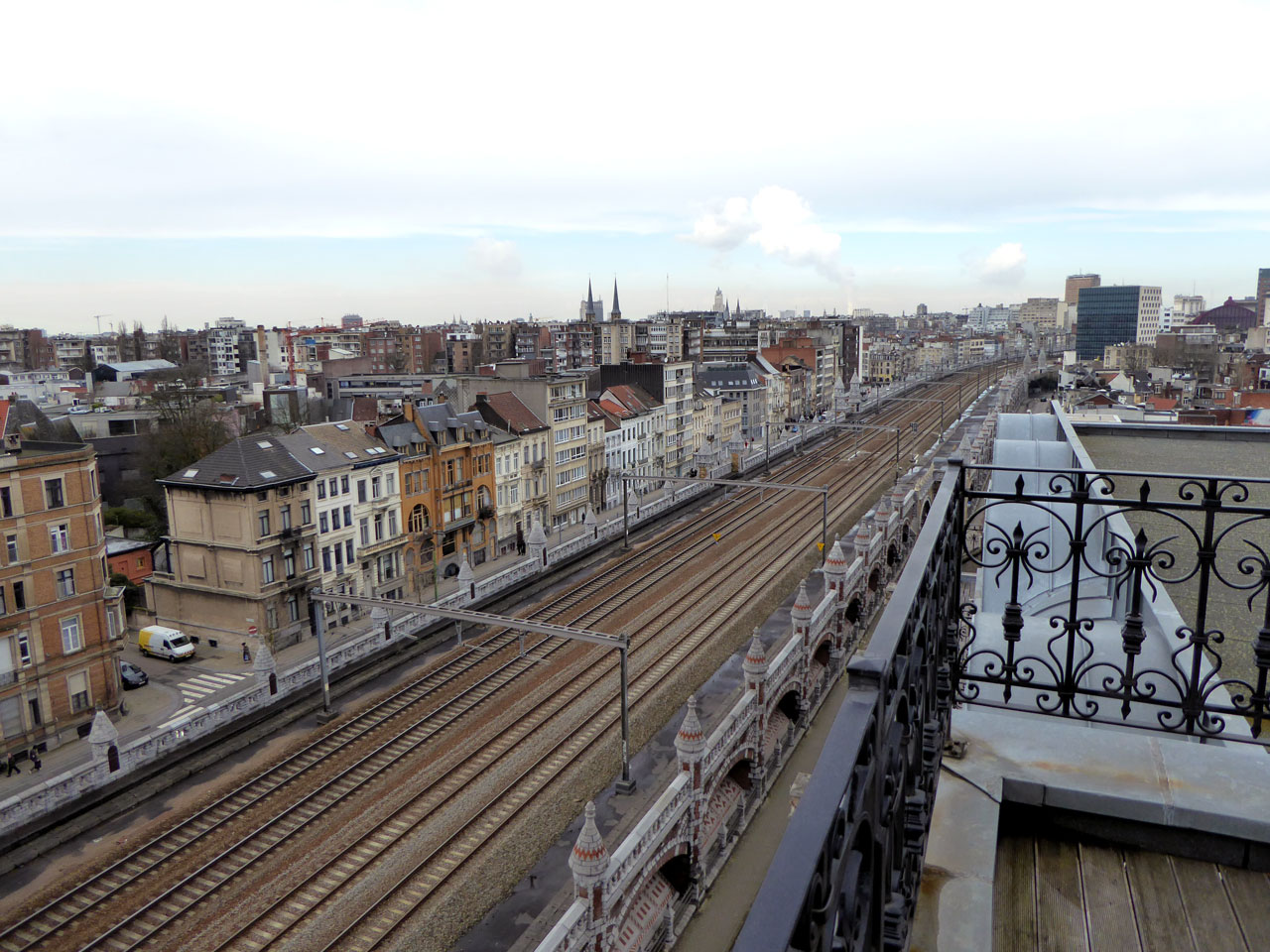 There has been a Jewish presence in Antwerp for at least 800 years, and their story is a familiar one to any student of European history. Over the centuries the level of discrimination has waxed and waned, but it has never completely disappeared, and it’s estimated that 65% of Antwerp’s Jews were killed during the Second World War. In spite of this, many European Jews who survived the Holocaust settled in the city after the war, and there are currently around 20,000 Jews living in Antwerp, many of them still involved in the city’s famous diamond trade. In some ways Antwerp is evocative of an older Europe, a time when Jews played an important and visible role in the commercial life of cities across the continent.

But there are also stark reminders of 21st century Europe’s dark side. Belgium remains on high alert following last year’s terrorist attacks in Paris, and the army is still on the streets. We saw soldiers patrolling several locations in the city centre, and the army is also guarding Antwerp’s Jewish community. In May 2014 a gunman killed four people at the Jewish Museum in Brussels, and there have been numerous attacks on Jews across the border in France. Indeed anti-Semitism appears to be on the rise across Europe, with Jewish communities finding themselves targeted by both Islamic extremists and resurgent neo-Nazi groups. 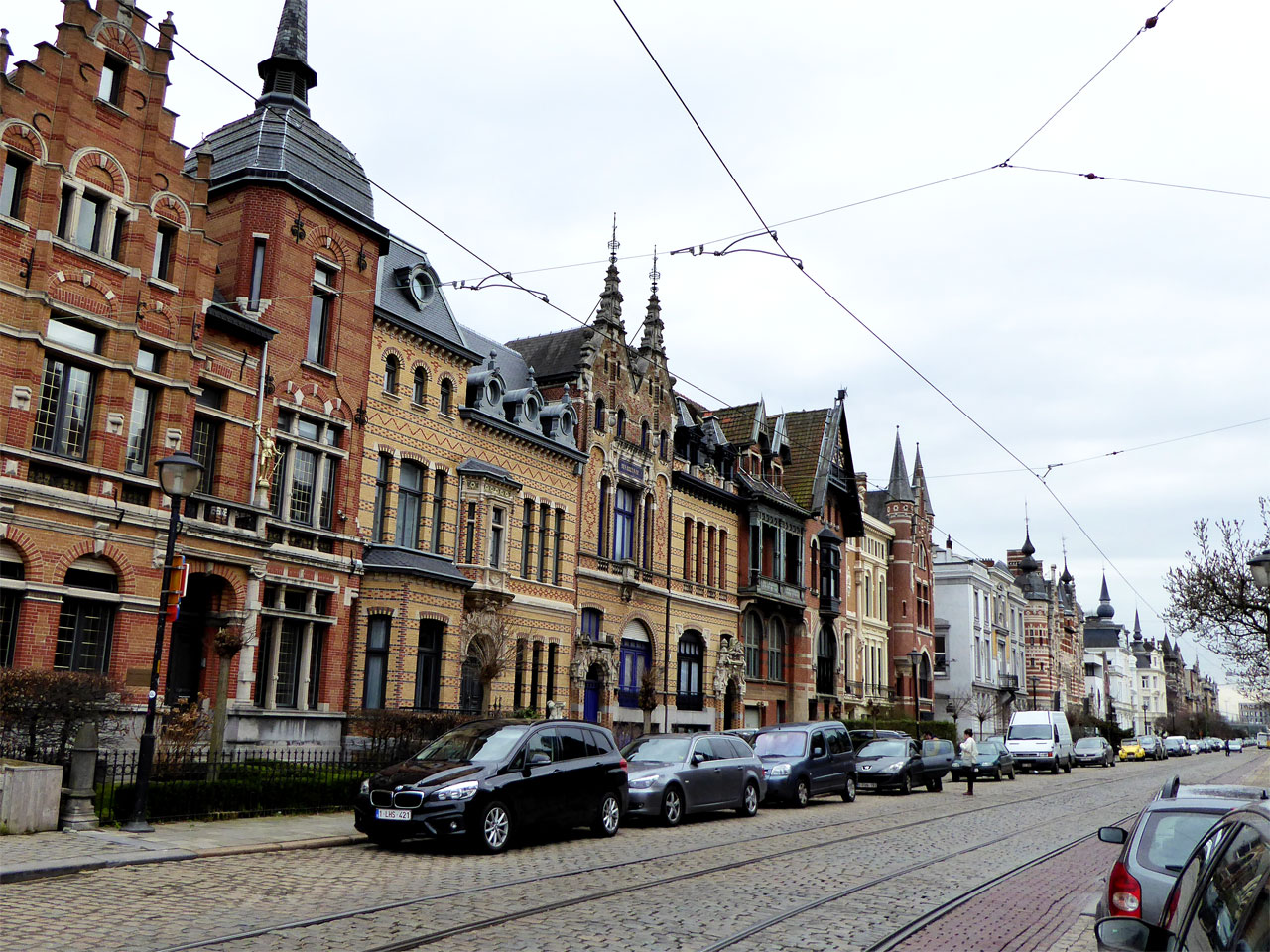 The following morning we passed through the Jewish quarter again on our way to Zurenborg, the district to the south of the city centre where we’d been drinking the night before. In the daylight Zurenborg reveals itself as something more than just a sleepy suburb, an open air museum of fin-de-siècle architecture so grandiose as to border on the absurd. One street in particular, Cogels-Osylei, is lined by towering Art Nouveau townhouses crowned with fairytale turrets, alongside mansions adorned by bulging organic forms that reminded me of Gaudí’s creations in Barcelona. 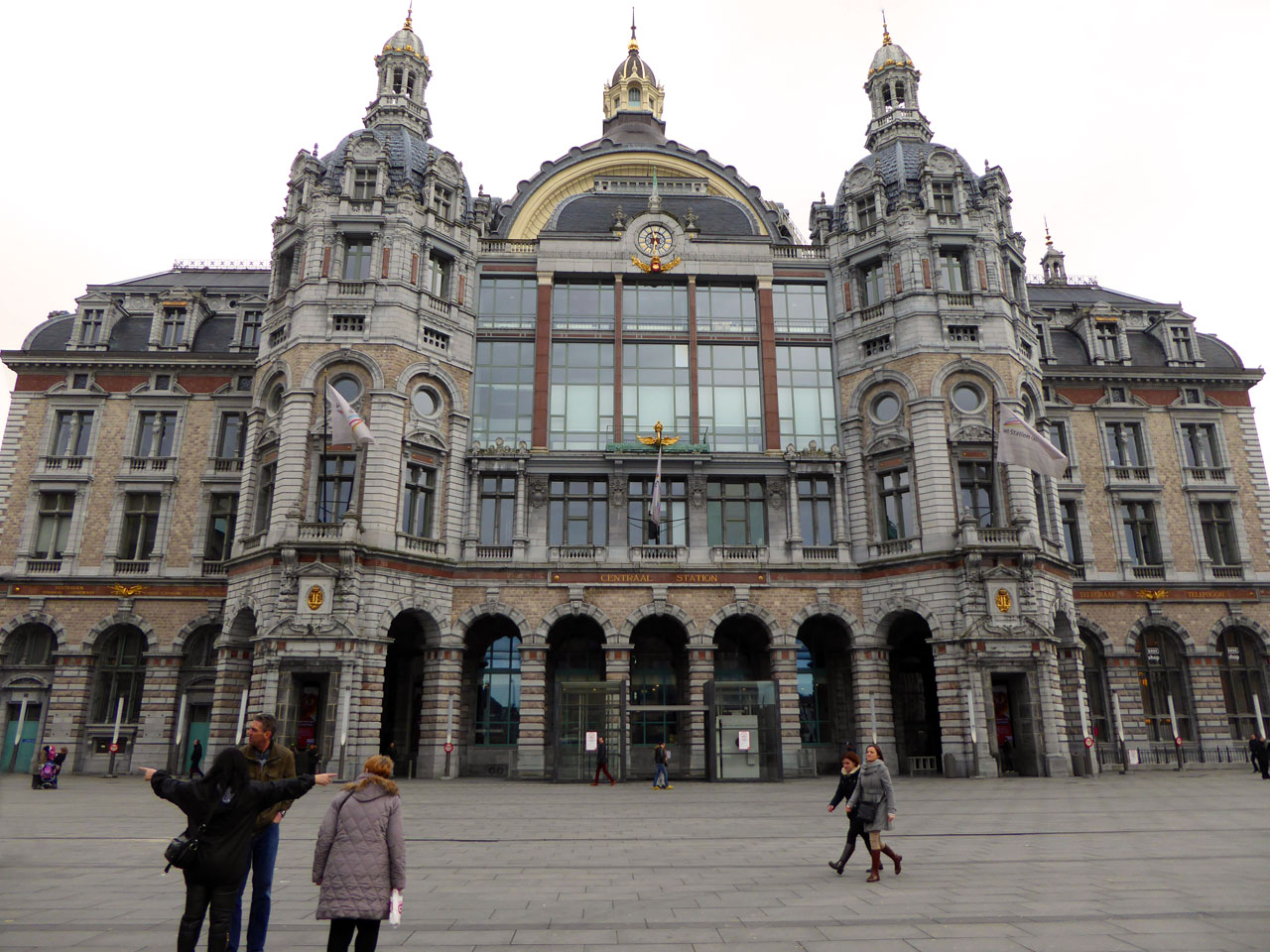 Although Antwerp may lack the stylistic harmony of somewhere like Bruges, the city is nevertheless home to some truly stunning architecture. Our hotel was right next to Centraal Station, which is surely Europe’s most spectacular railway terminus. Trains run through the station on three of its four levels, the tracks stacked one on top of the other in a way that doesn’t quite make sense when you first see it. This modern feat of engineering is encased within a staggering exterior, a cavernous domed hall of stone and glass that soars high above the station concourse. 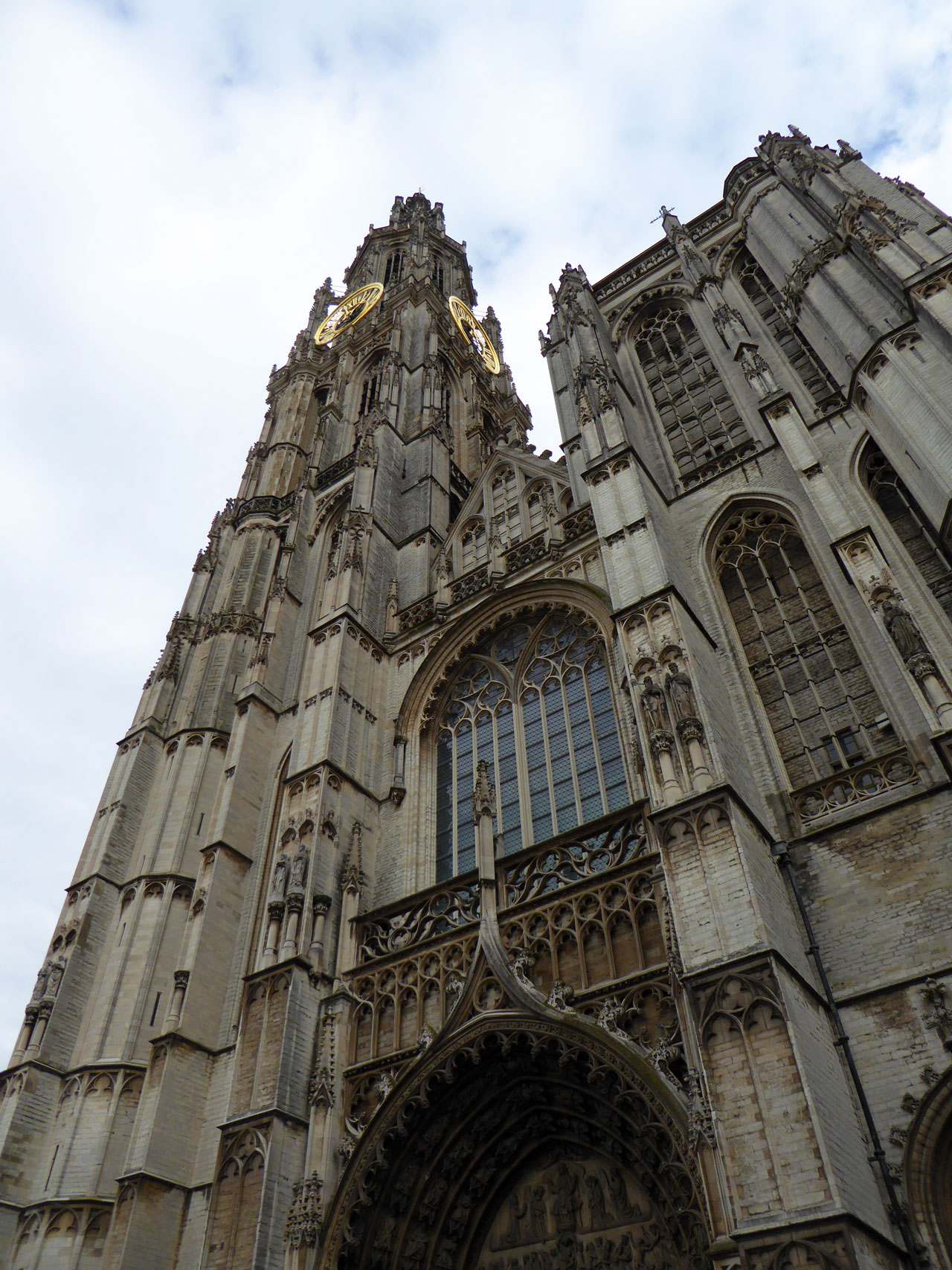 From the station we walked west to Antwerp’s historic centre, a quintessentially Flemish quarter filled with quirky cafés and carefree cyclists, and dominated by the slender Gothic tower of the cathedral. A small stage had been erected in the centre of the main square, the Grote Markt, along with a row of numbered animal pens and what appeared to be some sort of weighing apparatus. There seemed to be little in the way of explanation, and many of the locals watching on looked as confused as we did. Later that same day we returned to find that each pen now contained a hefty white bovine, and the ground was scattered with hay and cowshit. Evidently a prize of some sort had been awarded to one of the animals that stood before us, wrapped in a special coat and a sign that read ‘Quality Food’. We later discovered that we had missed the ‘weighing of the fat ox’, a tradition said to date back to the time of Napoleon Bonaparte. 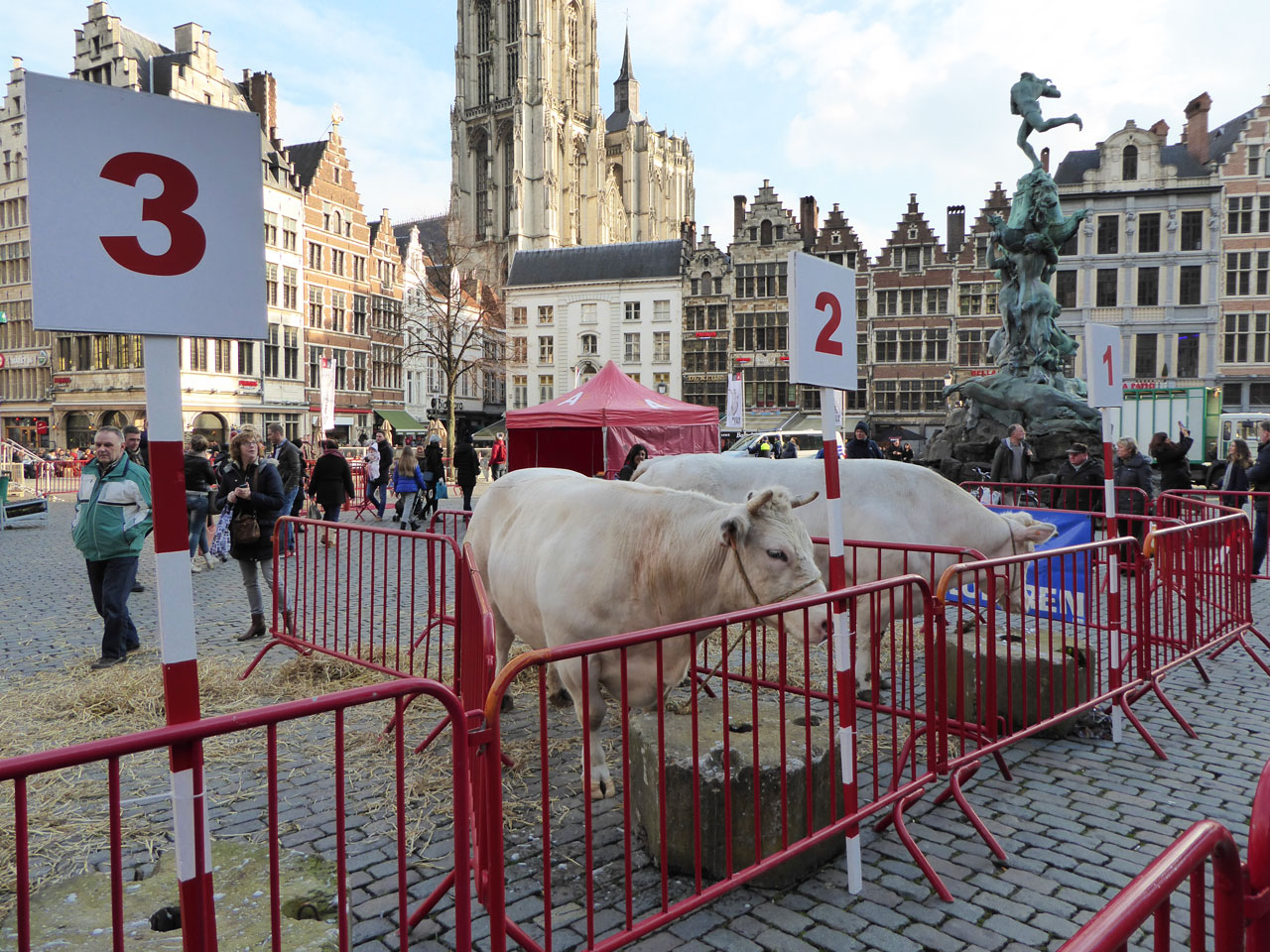 The overweight cattle were not the only females being sized up that afternoon. To the north of the Grote Markt is Het Eilandje, where Antwerp’s port was situated before it moved further up the river Scheldt towards the North Sea. Like disused docklands all over Europe, this area has had plenty of money invested in its regeneration, but there is still a seedy side, not least in the Red Light District around Schipperstraat. This street was flanked by Amsterdam-style shop windows where scantily dressed women sat on stools looking bored, transfixed by their smartphones, occasionally beckoning to the scuzzy-looking middle aged men leering at them outside. 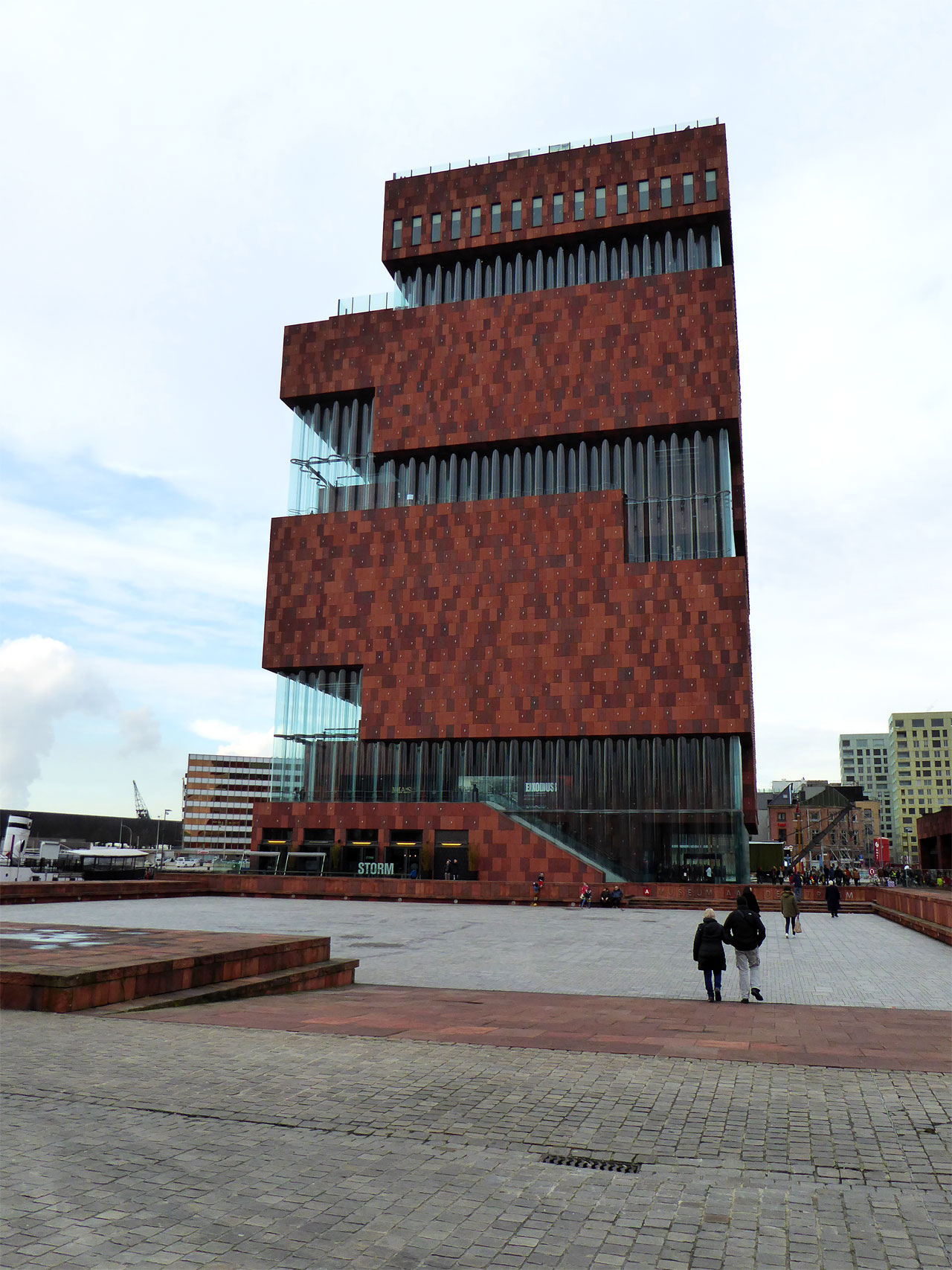 The most striking symbol of the area’s regeneration is the Museum aan de Stroom (MAS), a building resembling a giant game of Jenga built from red sandstone. The museum’s roof terrace, which is free to access, gives you a panoramic view of Antwerp old and new. On one side, the elegant spires and gabled roofs of the city’s medieval heart are visible amongst the more jarring post-war architecture, while on the opposite side the smouldering chimneys of the modern port stretch away towards the Dutch border in the north. MAS is not quite a history museum, but neither is it an art gallery; it seemed to be about everything and nothing at the same time. The current temporary exhibition is centred around body modification, with exhibits including a working tattoo studio where you could watch people being inked. Other exhibitions dealt with symbols of power, the nature of life and death, and the history of Antwerp’s port. It seemed a bit disjointed, lacking any unifying theme; I certainly can’t think of many other museums where you could be learning about the economic impact of container shipping one minute, and looking at a photo of a man with a metal bolt through his penis the next. 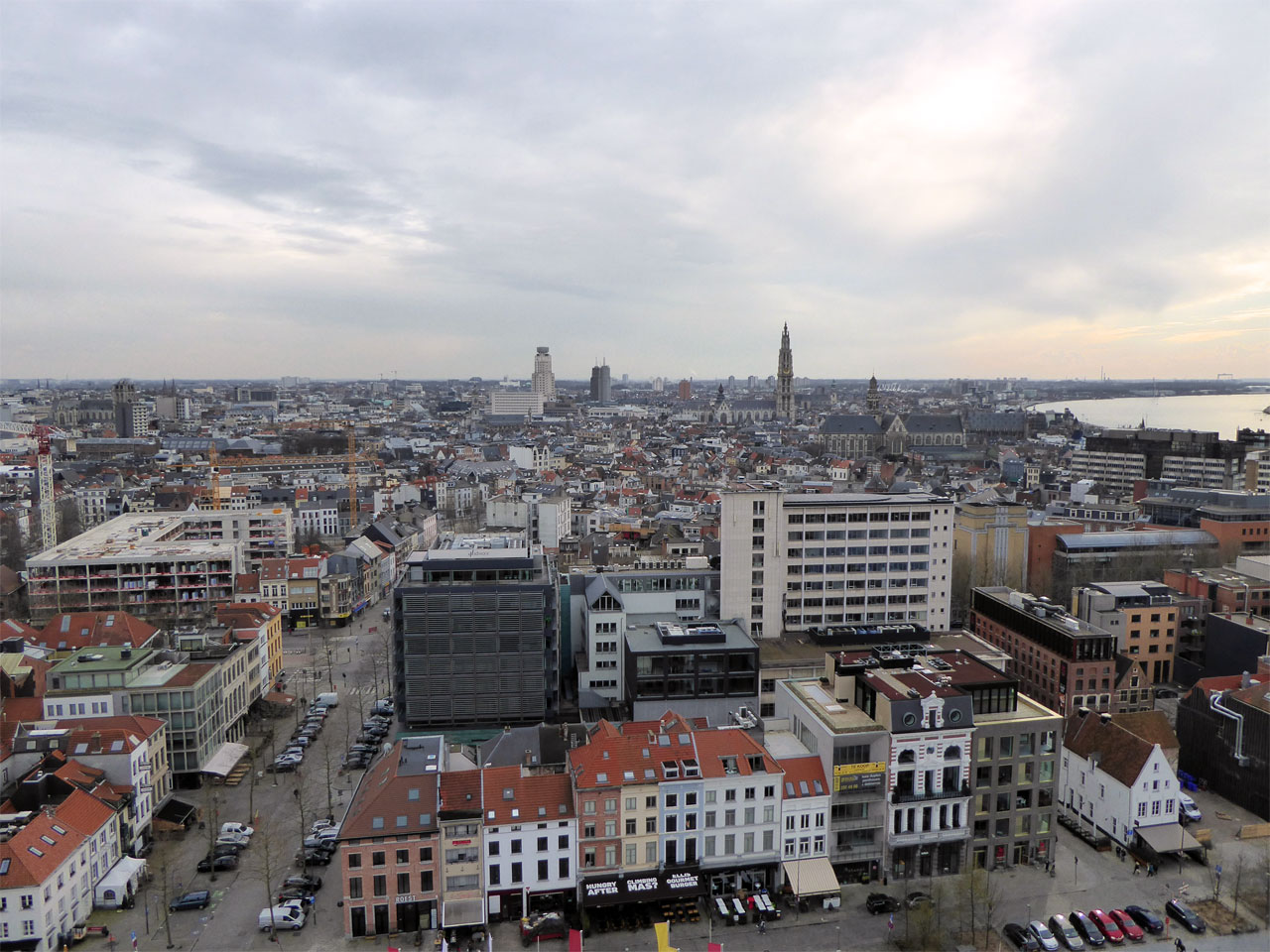 The most thought-provoking exhibition was a collection of photos documenting the plight of the many thousands of refugees who fled Belgium during the First World War. The German invasion and occupation was so savage that it has become known as ‘The Rape of Belgium’, with civilians executed en masse and their homes razed to the ground. Around a million Belgians escaped to the neighbouring (and neutral) Netherlands, and another 250,000 crossed the North Sea to the UK, which remains the biggest single influx of refugees in Britain’s history. Those seeking shelter were initially welcomed, but tensions began to build as the numbers mounted. Belgian refugees in Britain were accused of cowardice for fleeing their country, of stealing British jobs and houses, and even of being German spies. I hardly need to point out the parallels with Europe in 2016. 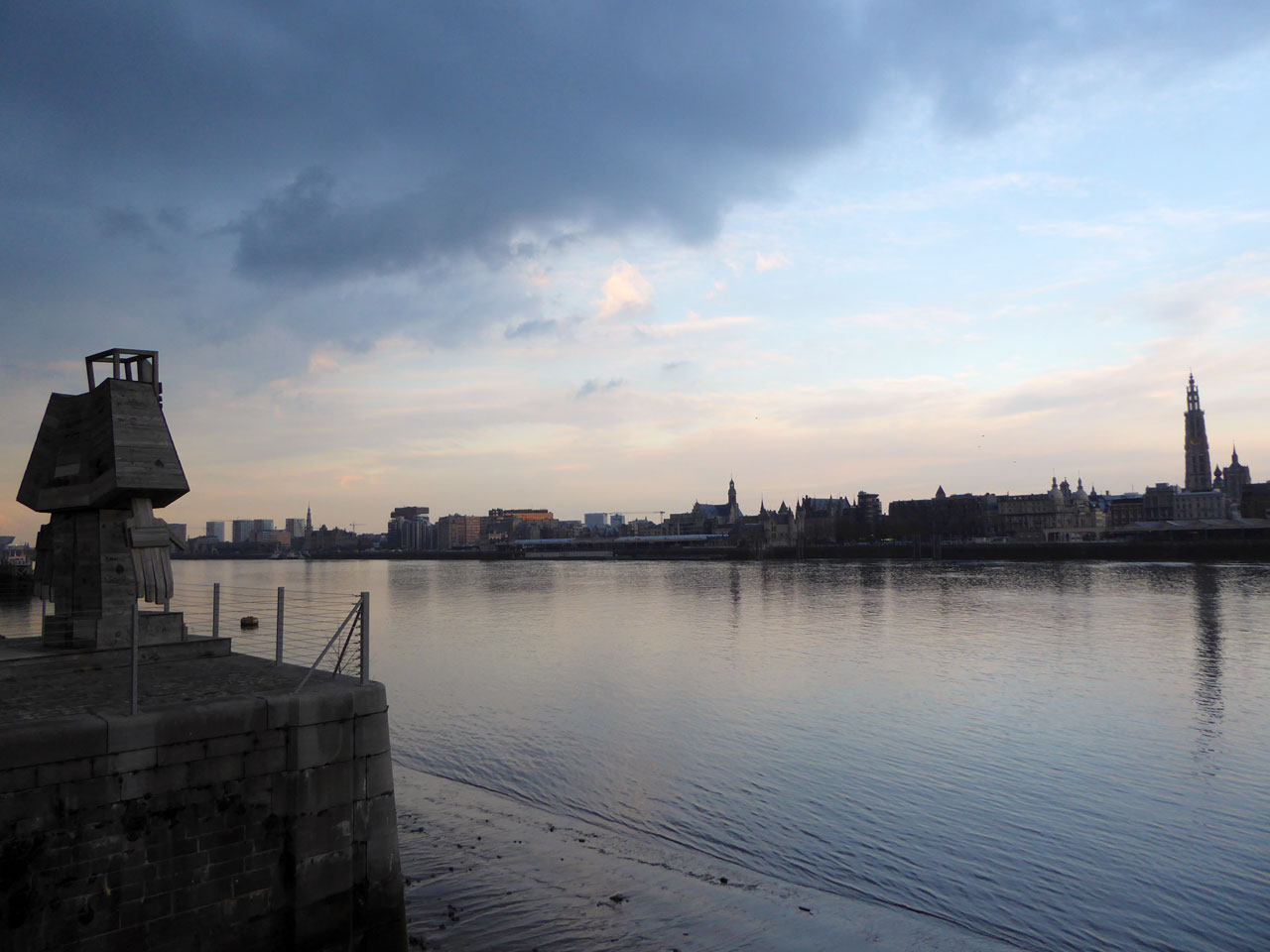 In October 1914, as the Germans laid siege to Antwerp, thousands of refugees fled across the Scheldt using a temporary pontoon bridge, supported by a flotilla of boats. In 2014 a replica pontoon was built to commemorate the centenary of this famous event in Antwerp’s history, but it has since been dismantled. Instead we crossed the river through the Sint Anna pedestrian tunnel, a 572 metre long passage that links central Antwerp with the Linkeroeve, the left bank of the Scheldt. As we looked back across the river at the silhouette of the city against the fading afternoon sky, it was tempting to view Antwerp itself as a bridge between the old Europe and the new.