Each day in the Valle de Viñales, at around two in the afternoon, the sky would start to bruise and darken. Fat thunderheads reared up above the mogotes, the lumpy limestone mountains that define the horizon in this part of Cuba. Broad-winged, black-feathered turkey vultures began to circle high up in the sky, and the sun’s light would slowly fade as the first distant rumbles echoed across the valley. When the tension finally exploded into rain, it was heavy and intense, lasting anything from ten minutes to an hour. Then, as quickly as it had arrived, the storm would dissolve and the blazing sun would return, rapidly drying the dripping palm fronds and rusty red puddles. 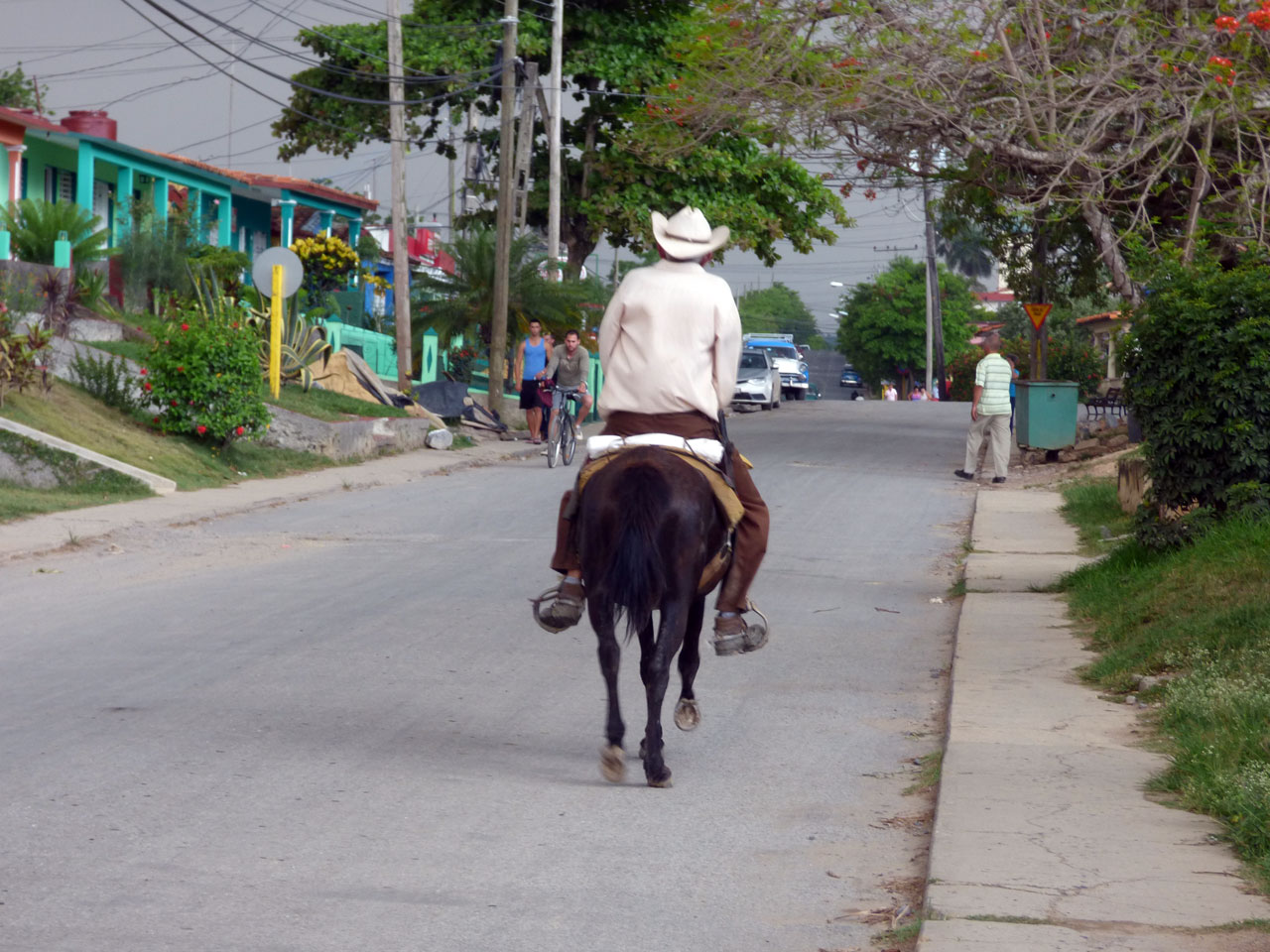 This climate, sun-kissed and rain-drenched, combines with the fertile soil to create the perfect conditions for the cultivation of tobacco, the cash crop for which this region is famous. The village of Viñales itself is a place that retains the feel of a working agricultural community, in spite of the fact that 90% of the houses seem to have been turned into casas particulares for tourists. Farmers trundle down the road on an oxcart, or clip-clop along on horseback, their weather-worn faces shielded by wide-brimmed hats. The sound of hens clucking and cattle lowing is ever-present outside of the small concentration of bars and restaurants that serves as a town centre, including in the family compound where our own casa was situated. 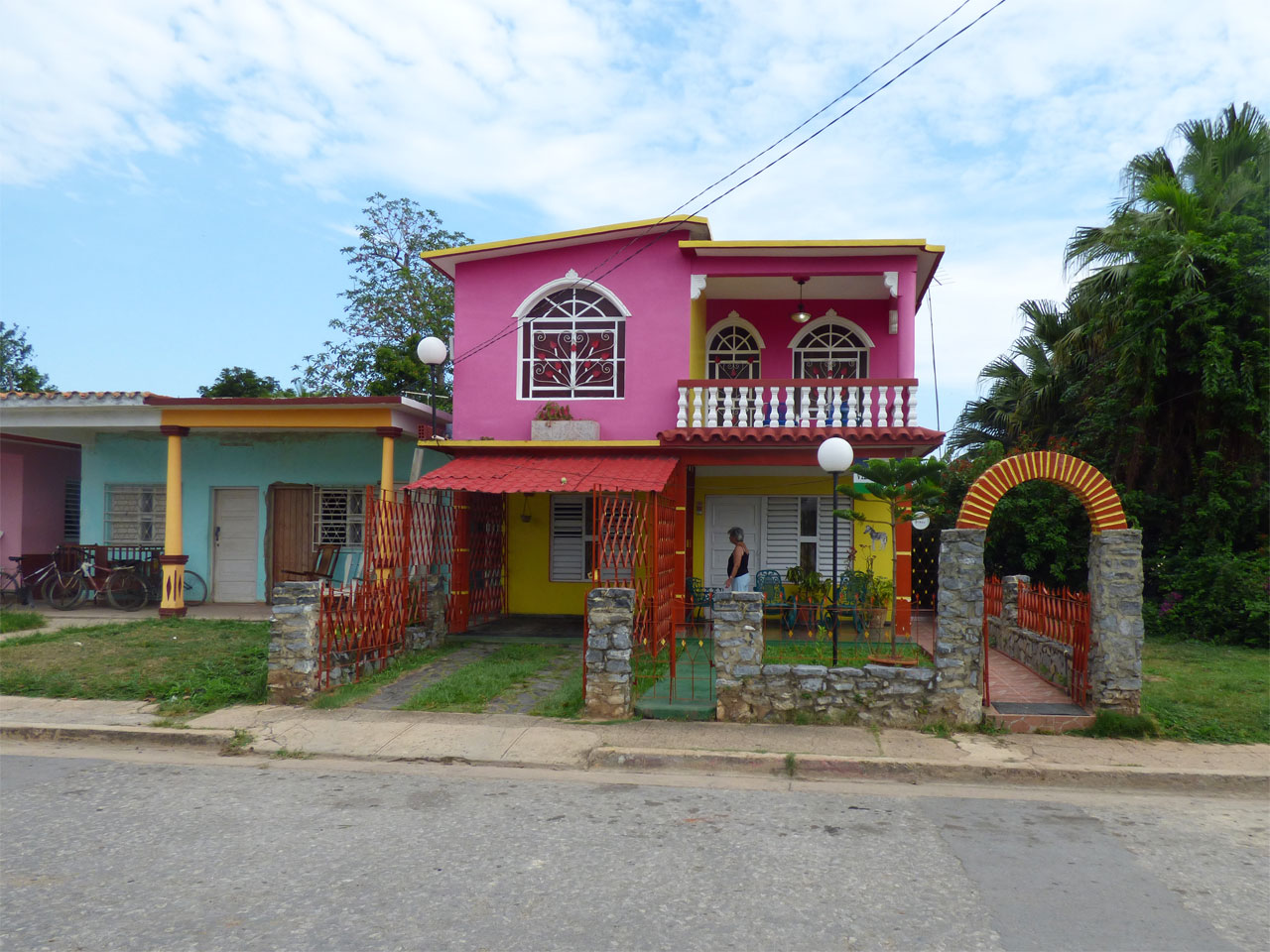 On our first evening we ate at our casa, a simple dinner of chicken, rice and vegetables cooked for us by our genial host, Maikely. So much is written about the rights and wrongs of Cuba’s communist system, and it’s true that many people are forced to live a frugal existence, our hosts in Viñales included. But equally the subsidised housing, free healthcare and free education provided by the government means that you don’t see the same sort of poverty that exists on many other Caribbean islands. Cubans by necessity have a ‘make do and mend’ mentality, but they also enjoy some of the highest living standards in the Americas.

After dinner we ruminated over this on the roof terrace, with a carton of red wine we’d bought in town earlier. As night enveloped us the chickens fell silent, their clucks and squawks replaced by the rhythmic croaking of frogs, and the occasional dog barking in the distance. It took us a while to realise that the little dots of light zig-zagging around in front of us were fireflies, and we speculated about the strange, reddish glow of the moon. We wondered if it might be the soil from the fields, hanging in the air. 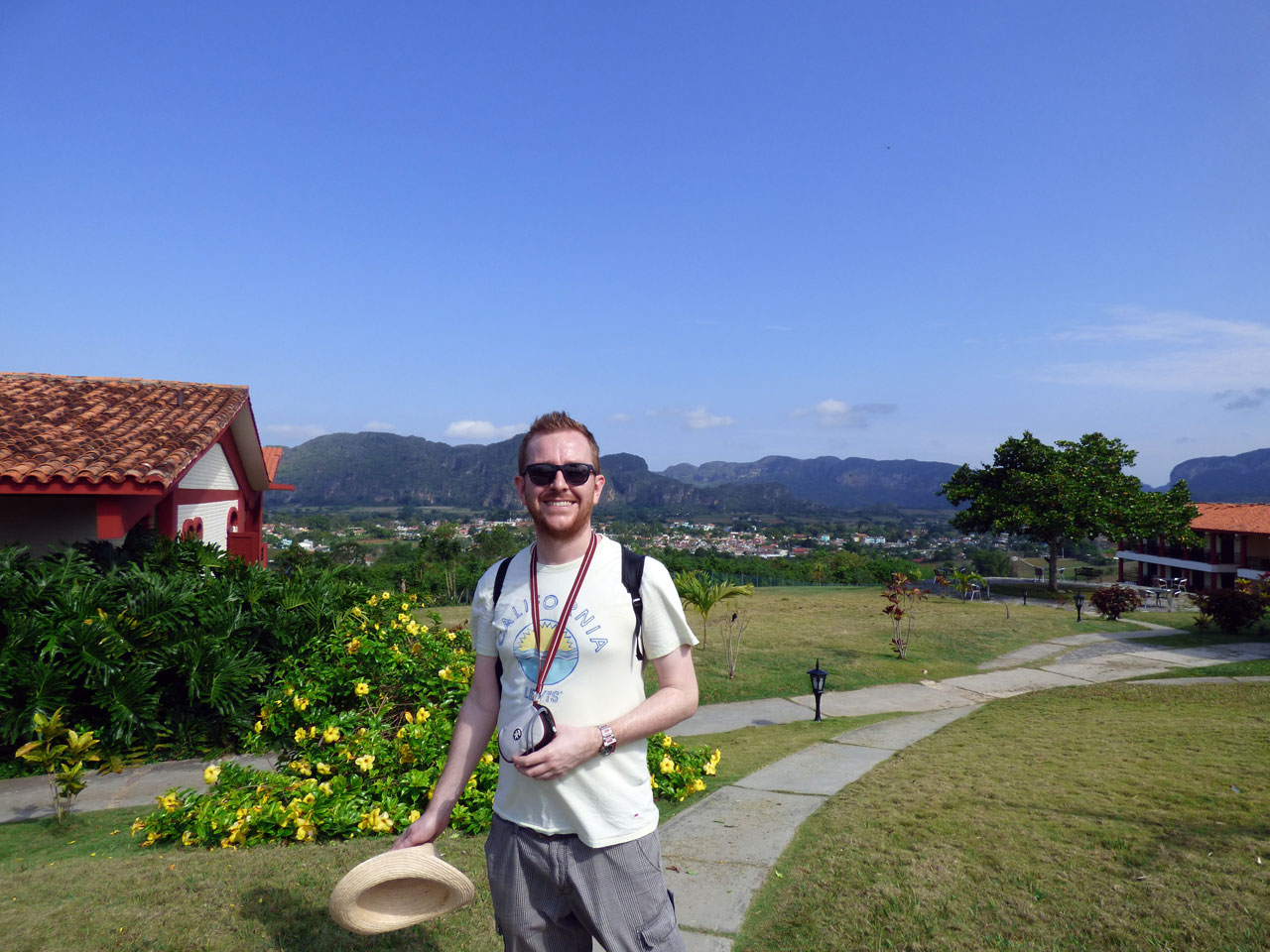 The next day we walked up a hill in sweltering sunshine to the La Ermita hotel. The hotel was nothing special, but the views across the valley were pretty spectacular, and we made a note to come back for a swim in their pool later in the week. From the hotel we took the bus that runs on a loop around the town’s small selection of tourist sights, to try and get our bearings. One of the ‘attractions’ served by the bus was the staggeringly ugly Mural de la Prehistoria, which resembles something a small child might paint, daubed on the side of a mountain at a size that’s well out of proportion to its artistic merit. 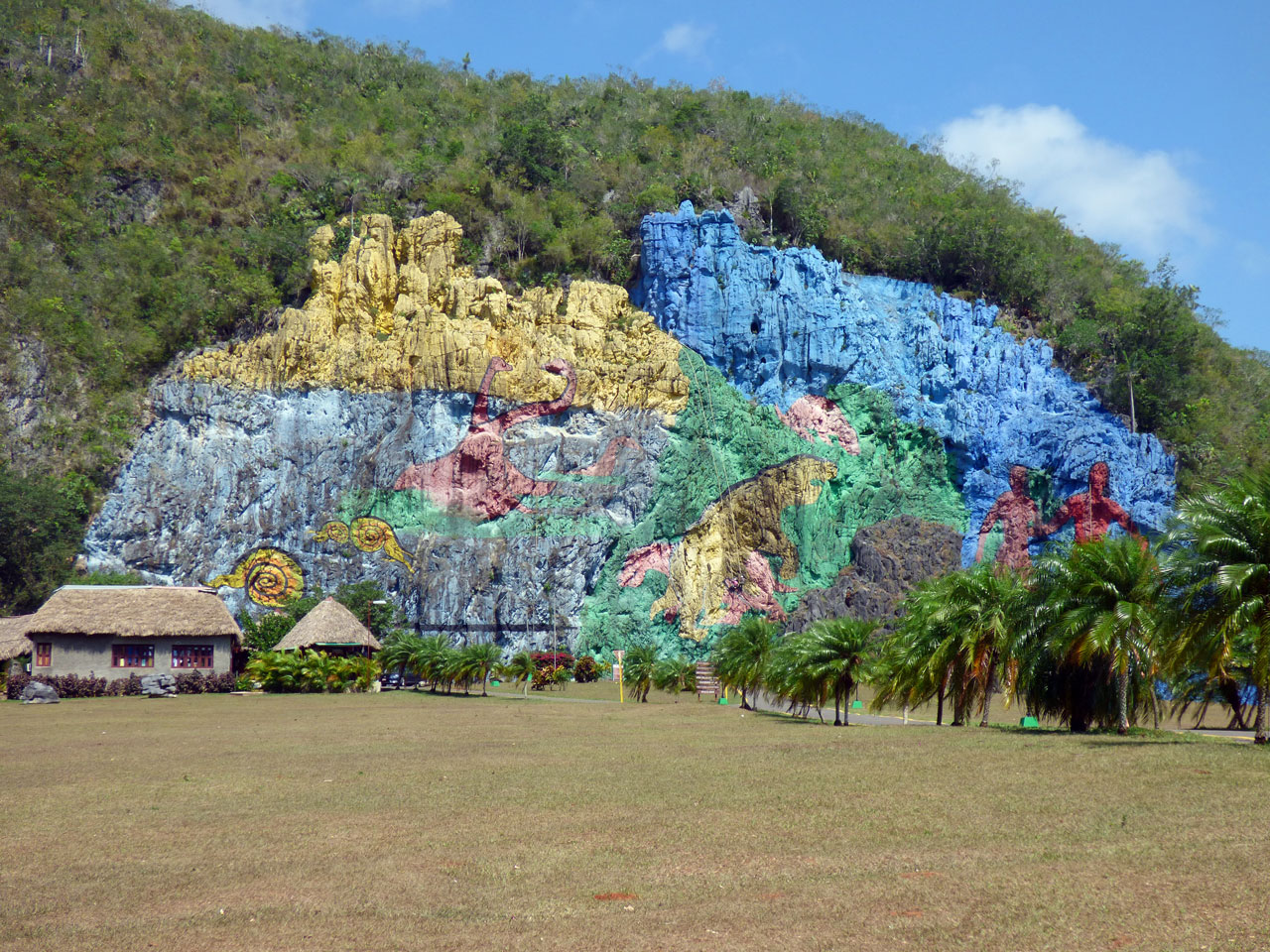 We decided to skip the mural, alighting instead at the marginally more interesting Cueva del Indio, a cave that leads down to an underground river. I feel I may now have reached the point in my life where I’ve seen enough caves, but the freshly mixed piña colada we had afterwards made our visit worthwhile. It was delicious in a way I had never realised piña coladas could be, setting off a mild obsession with the drink which lasted for the rest of the holiday. 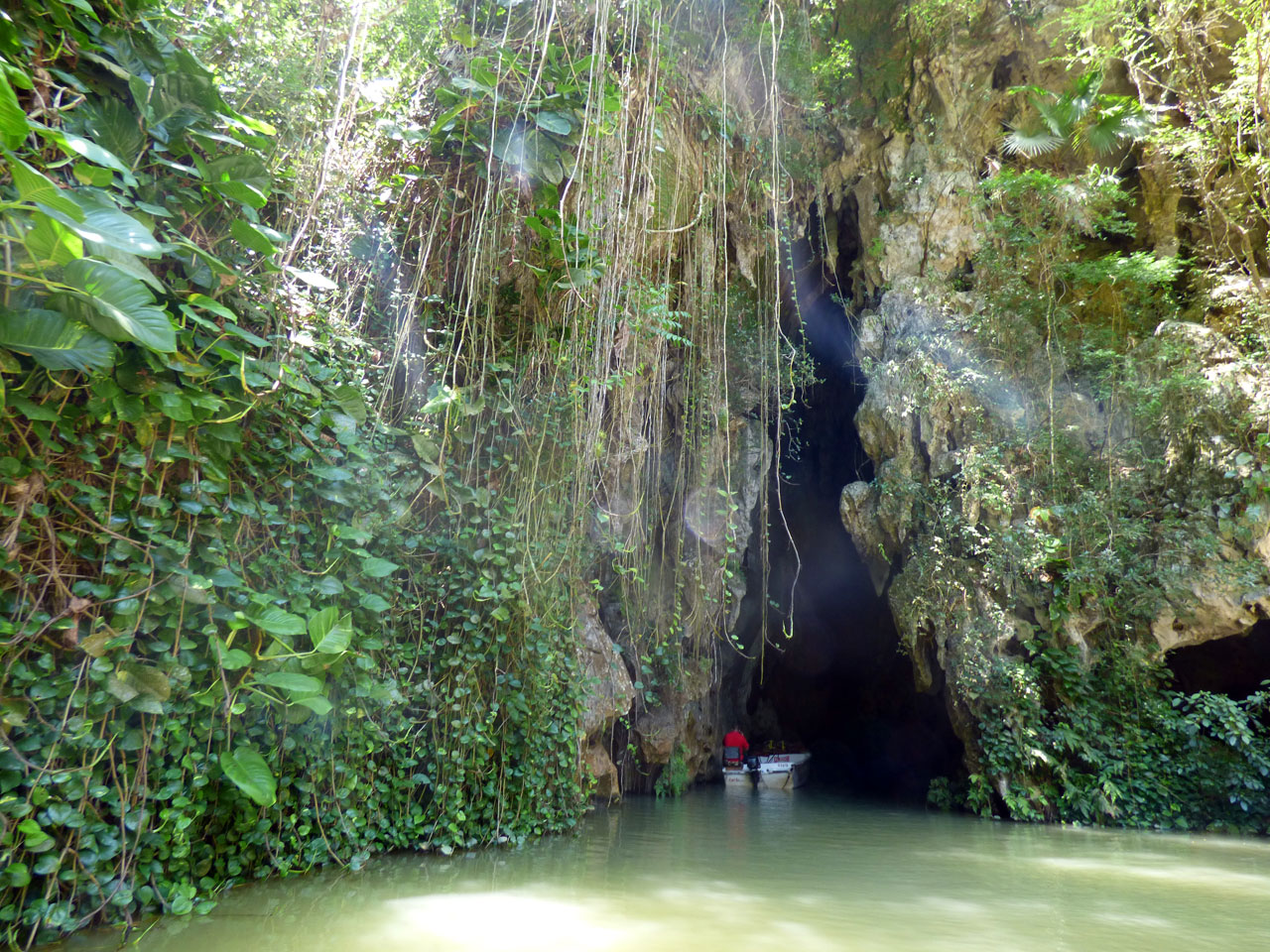 After the cave we headed back to the village, and had lunch at a deserted restaurant near La Ermita. Again the early afternoon storm clouds broke over the valley, and this time the shower lasted a lot longer. We sat under a thatched roof watching the water cascade down the hill, sheltering with a couple of iridescent green lizards. When the rain eventually cleared we walked to the Botanical Garden, an unexpectedly impressive collection of towering trees and tropical plants that has been here for almost a century, and we were shown round the garden by members of the family that live in the little cottage at its centre. Just about every fruit you can imagine grows here, and several I’d never even heard of, as well as cocoa, coffee and a host of spices. 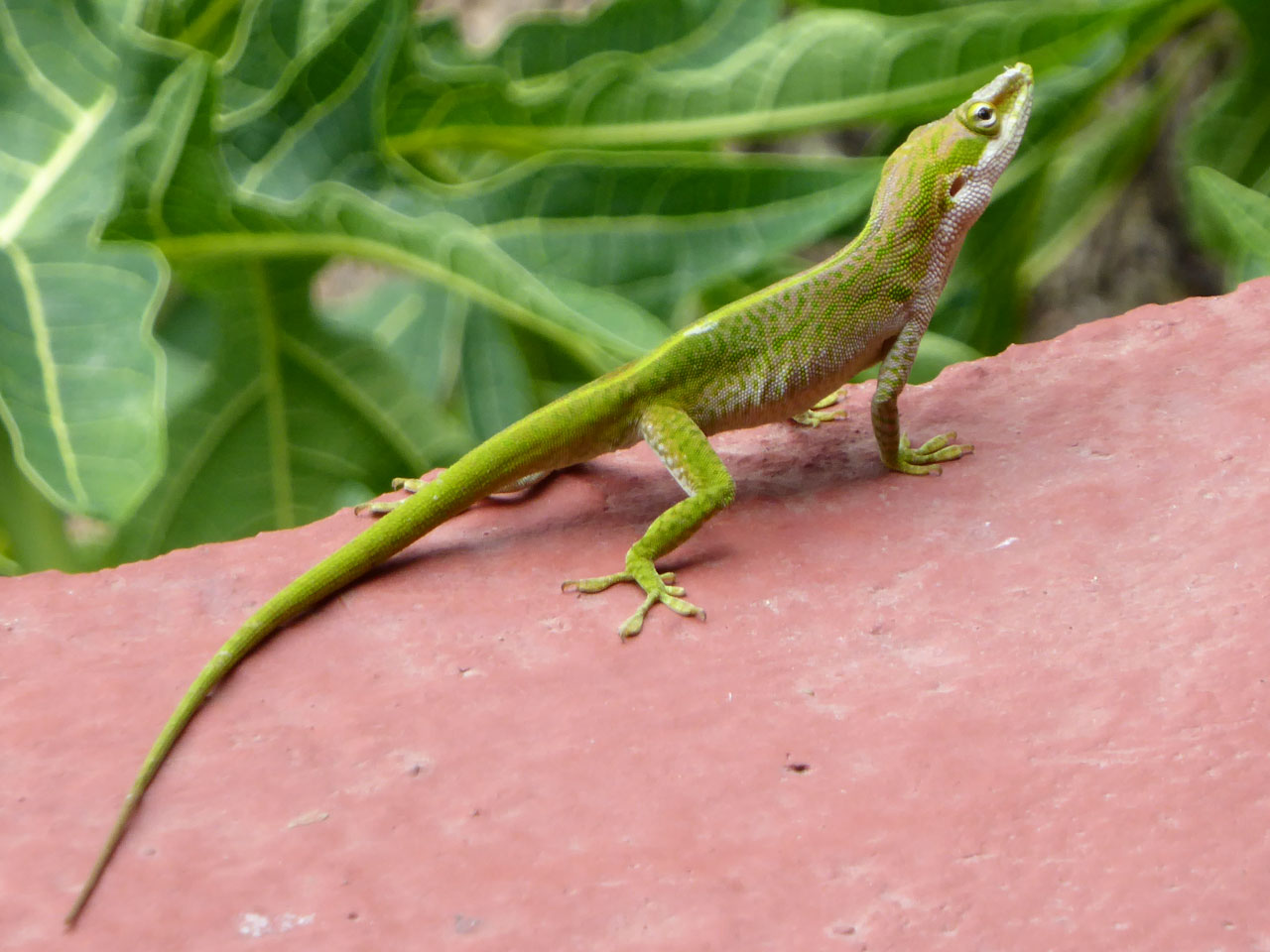 On our final day in Viñales we set out on a leisurely hike to the dramatic-sounding Valle El Silencio, and were led by our guide through rust-red tobacco fields and verdant pastures. Heading away from the road, the noise of sputtering old cars quickly faded, replaced by the sound of braying goats, yapping dogs and the ubiquitous chickens. In the fields stood thatched barns where tobacco leaves were hung up to dry; peering in through the door, the smell was overpowering. This plant that has millions of people around the world addicted to nicotine, that kills thousands upon thousands of people every year, seemed somehow more innocent here, rustic and natural, providing an honest living for Cuba’s campesinos. Ethically I wasn’t quite sure what to make of it, though as an ex-smoker it was interesting to see the origins of that straggly brown plant matter that I used to roll up and puff on. 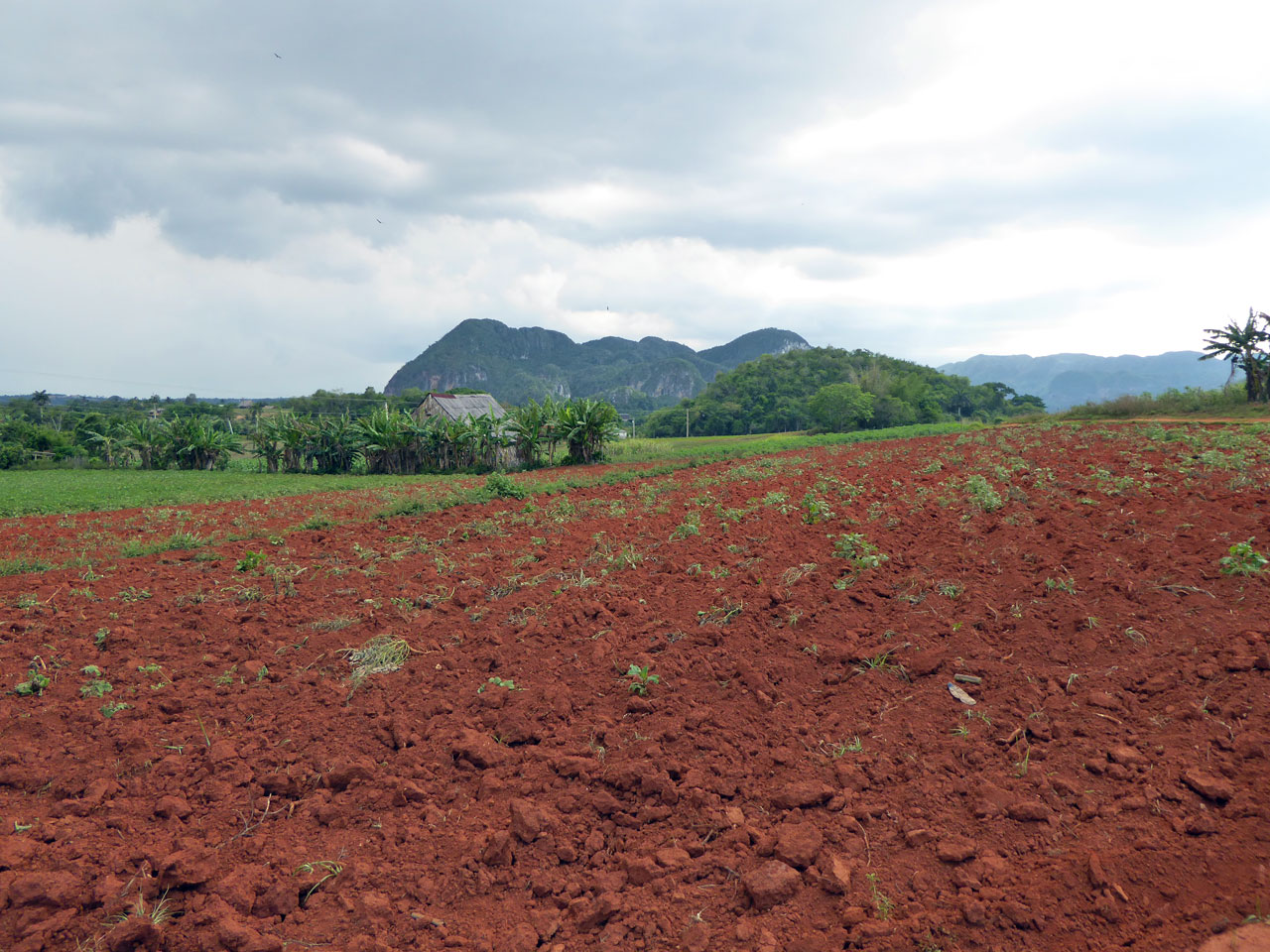 We had set out on our walk just after lunchtime, and, right on cue, the clouds were gathering again over the mogotes. This time we were caught out in the open when the rains broke, and we dashed for cover, taking shelter in a muddy pigsty, the resident hogs eyeing us suspiciously as they snuffled around in the muck, unbothered by the rain. 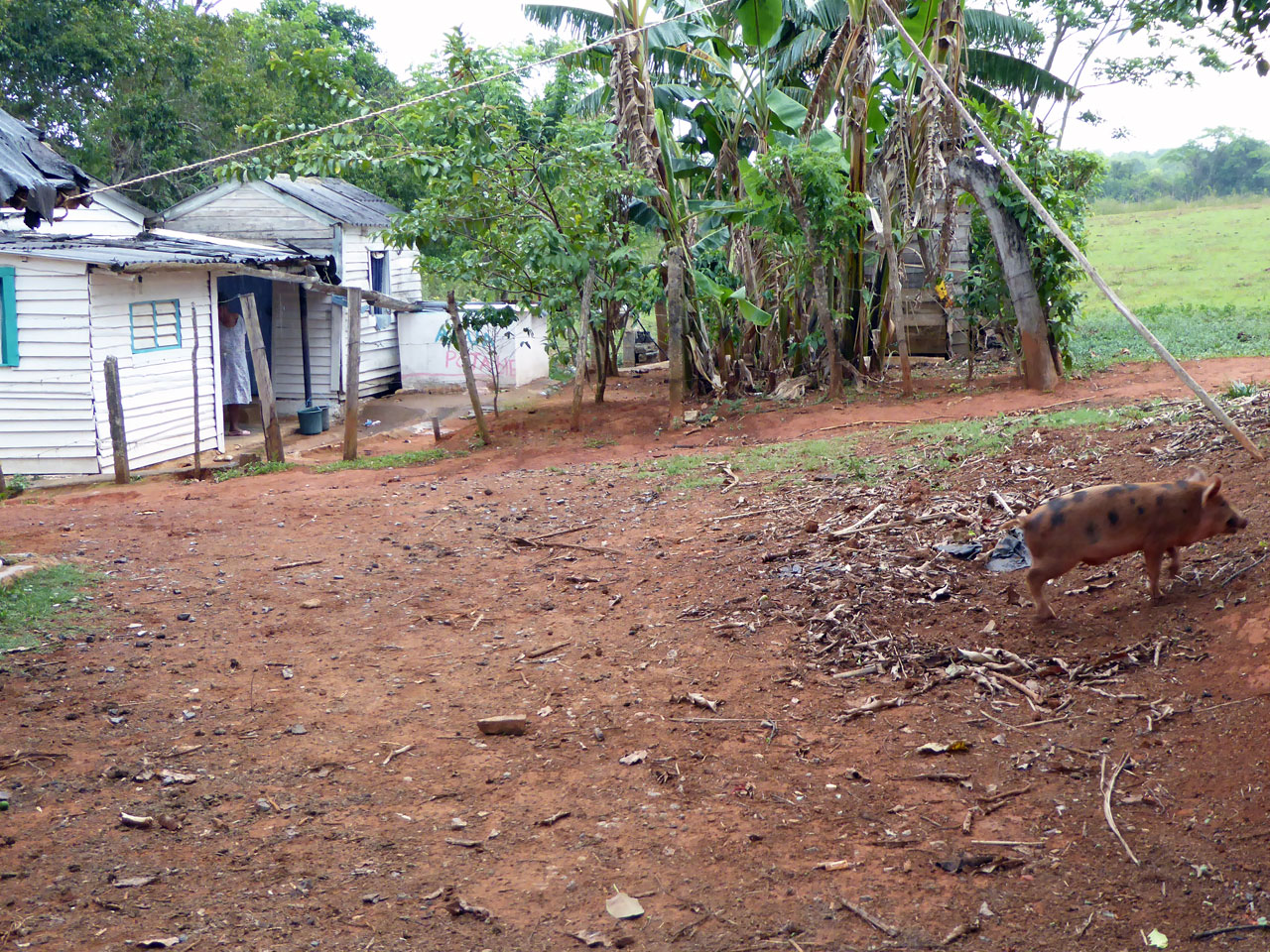 A gap in the rain allowed us to reach another farm, where we stopped for a drink. The oppressive humidity had returned, so I opted for a refreshing guarapo (sugar cane juice) and Polly had a cocktail in a coconut. All around us chickens clucked and turkeys gobbled, the ambient backing track to the Cuban countryside. 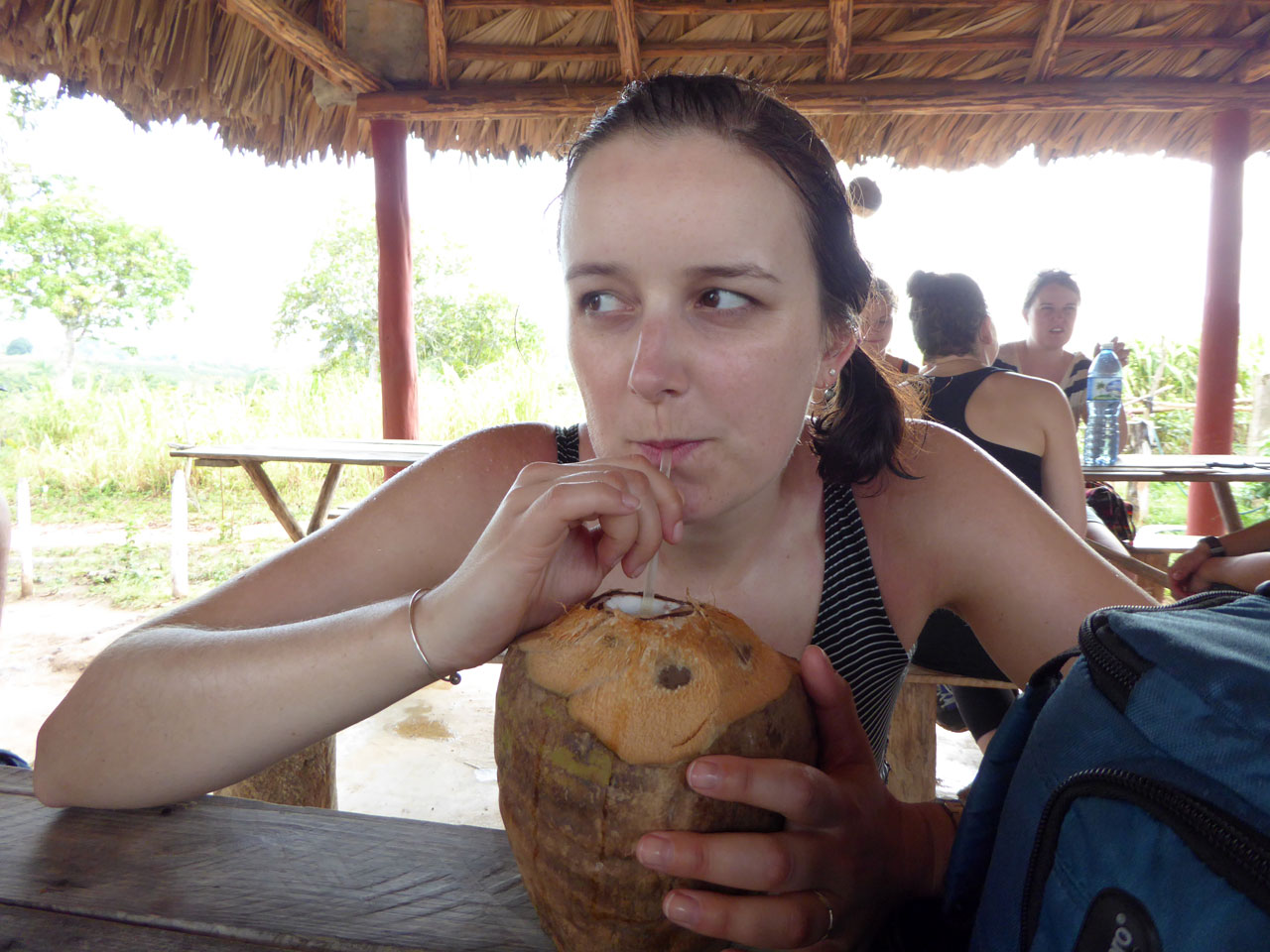 The last stretch of our hike took us past a lake and along a muddy trail to a tobacco farm with a great view across the valley. Here a rotund farmer sporting a cowboy hat explained to us how the tobacco is harvested and then separated out into different grades. The lowest grade is used for cigarettes, while the top notch cuts are flavoured and rolled into cigars by hand. Although I’m not much of a cigar aficionado, I could hardly come all this way and not try one. The farmer handed me one of his homemade habanos, with a dab of honey on the end to add a touch of sweetness. The taste was smoother and less cloying than cigars I’d tried before, perhaps helped by the honey. 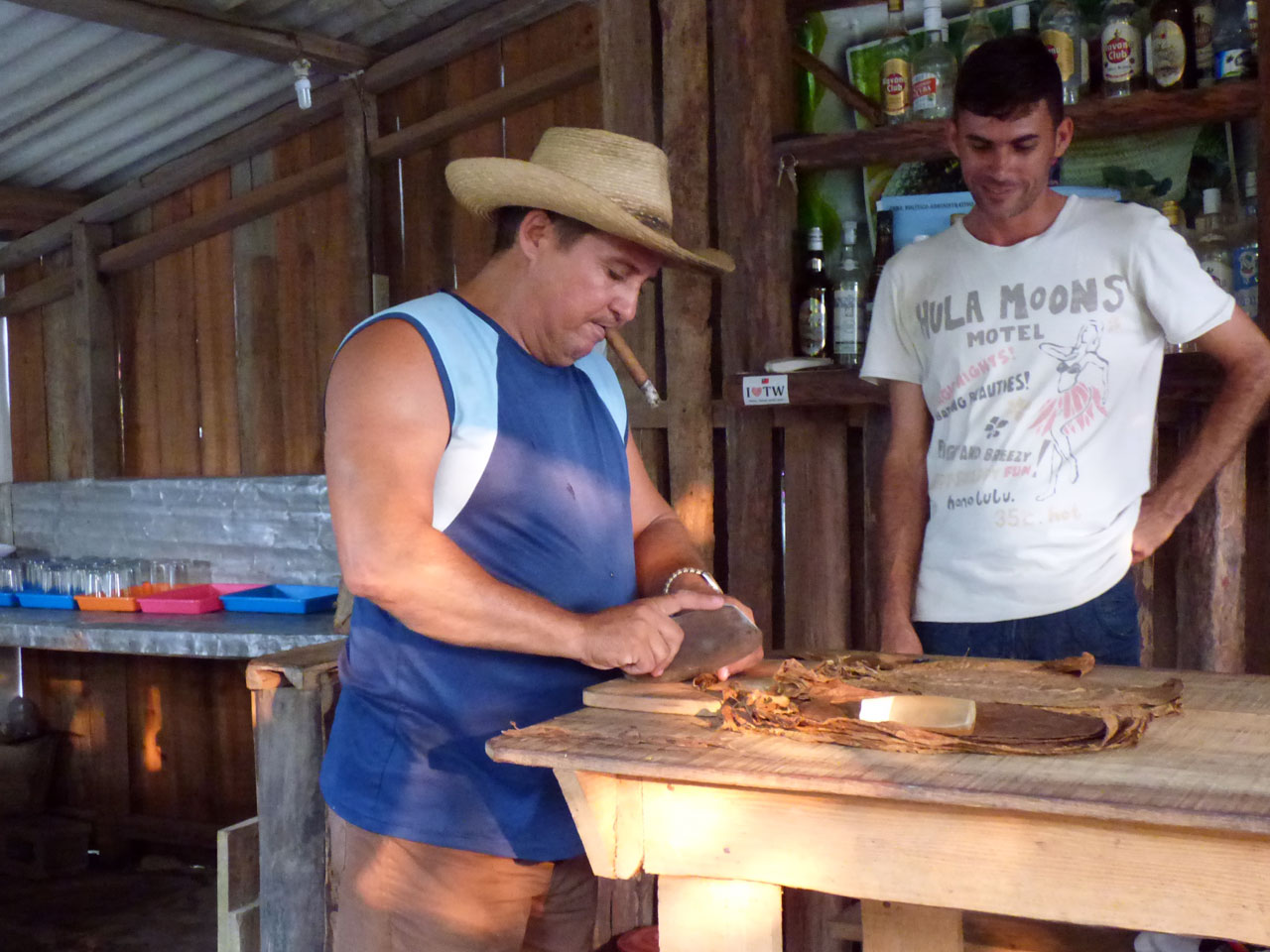 Sat there watching the sun set over the mogotes, cigar in one hand, mojito in the other, I suppose I must have ticked off just about every Cuban tourist cliché in the book. But in a way I think that’s what’s special about Cuba: it really is how you imagine it to be, it’s mint and rum and sugar and honey, it’s cigars and chickens and Che Guevara, it’s guitars and guajiros and growling engines. There’s nowhere else quite like it.

Arriving in Trinidad was like walking into a postcard. The Unesco-listed casco histórico, centred around the elegant Plaza Mayor, was a photographer’s dream, all pastel facades, cobbled streets, iron caged windows and

Havana is often described as a city stuck in a timewarp, and perhaps that was true once. For me, however, the label didn’t quite fit; the Cuban capital was more like one