Gap-toothed, pink-eyed and docile-looking, perhaps dulled by the sun or maybe just stoned, the old man, beaming, offered up his hand for a fist bump.

It sounds contrived now, but at the time it seemed profound. It was the middle of the day and the atmosphere in Gros Islet was soporific, barely a car on the streets. This little fishing village on Saint Lucia’s north west coast sits on a broad bay of staggering natural beauty, a panorama of saturated technicolour where fine golden-white sands back on to rolling green hills.  Life here seemed to eddy and swirl, the rhythms barely perceptible, like the light sea breeze that petered out just yards from the shore or the sluggish ebb of the Caribbean Sea. 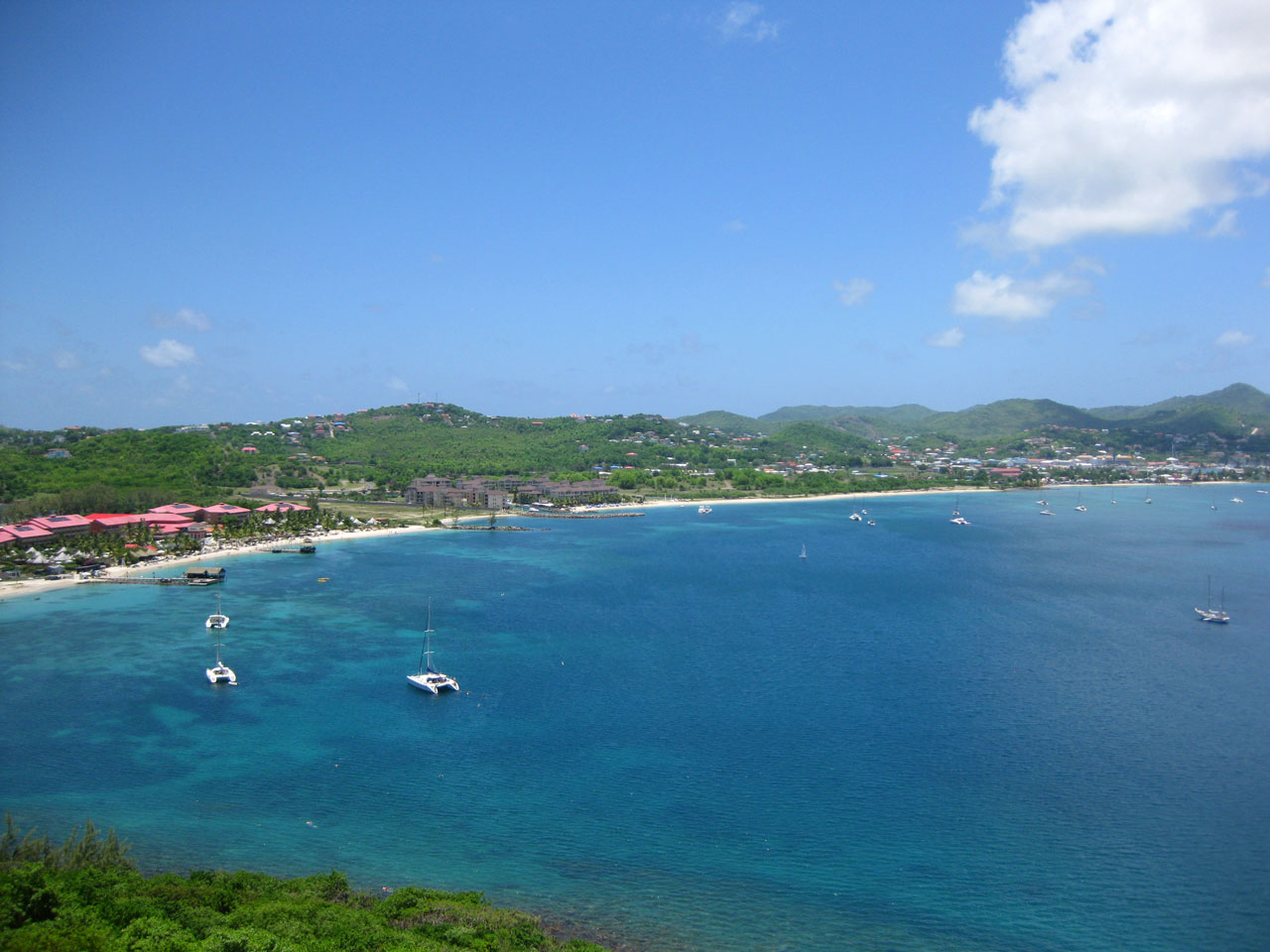 A group of youngish lads were sat round a table under the shade of a corrugated iron roof, smoking and playing cards. They spotted us, the lone outsiders tentatively tiptoeing around this dusty backstreet, and called us over. They asked where we were from, then tried to sell us some cheap perfume in boxes covered with Arabic writing. We politely declined, but the pungent pong of the ‘free sample’ lingered on my skin for hours. As in much of the Caribbean, many locals have little to show from the influx of rich tourists, and opportunities are limited for those who’ve missed out on the more lucrative jobs in the hotels. We had lunch in a little restaurant on the crossroads at the centre of the village, where the ceiling fan struggled to lighten the thick tropical air and many of our fellow diners wore the pristine uniforms of the nearby Sandals and Rex resorts. The food was deliciously heavy – jerk chicken, mac and cheese, plantain, rice and peas – and we ambled our way back to our hotel feeling pleasantly drowsy in the afternoon heat. 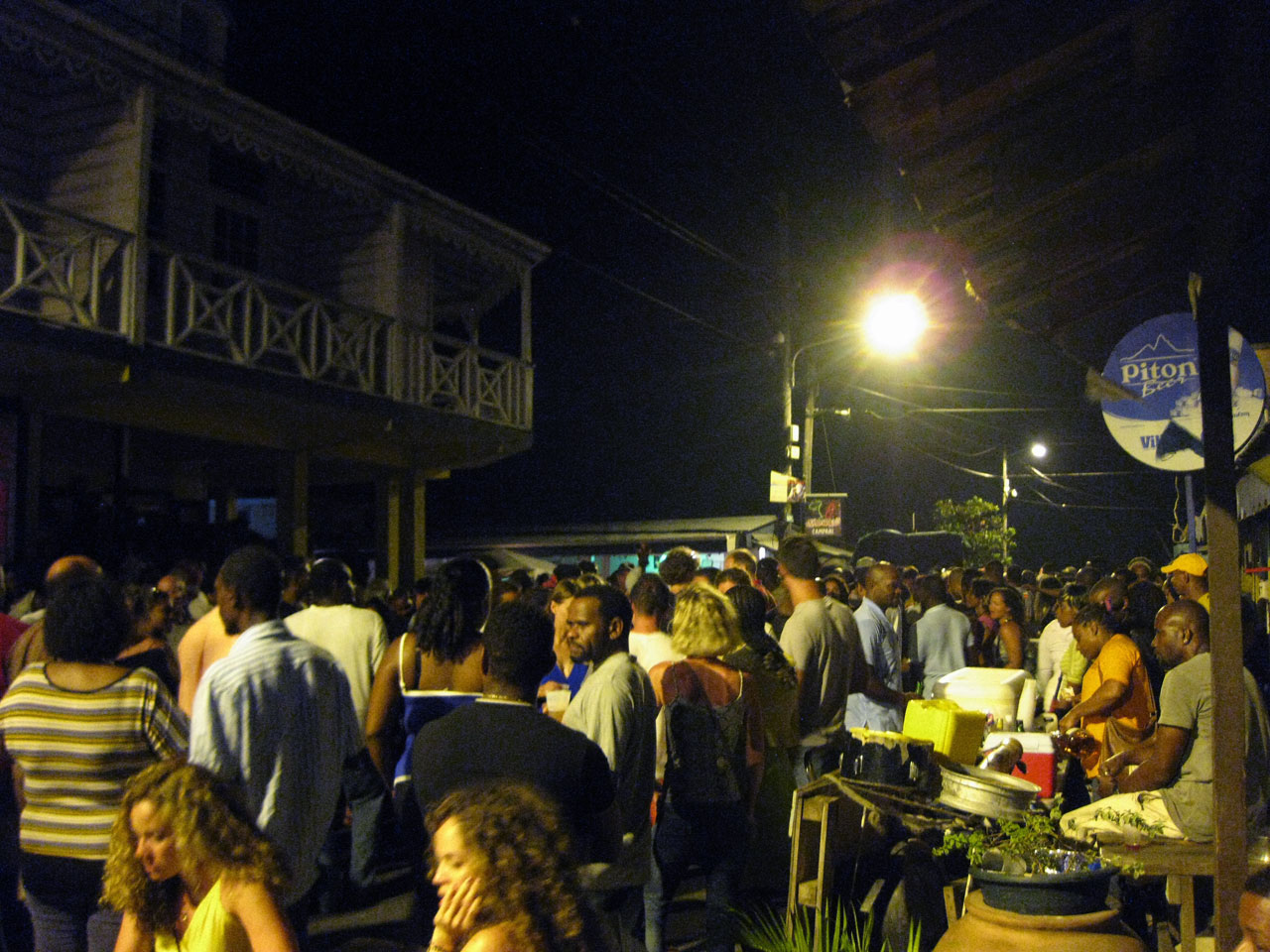 The scene at this sleepy crossroads couldn’t have been more different when we returned on Friday night for the weekly ‘jump-up’, a cacophonous party where the houses, hotels and yachts empty into the streets. Huge speaker stacks were set up on the corner, the pavements lined with stalls where plump little ladies dished out plastic cups of potent homemade rum punch, and the smell of chargrilled chicken wafted across the crowded streets. The assembled congregation was an eclectic mix of islanders and tourists, many of whom already looked pretty far gone on the punch, flailing around, red-faced and shameless, winding and grinding to the music. The soundtrack ping-ponged from frantic soca to languid reggae to the same cheesy dance-pop you get in every holiday resort where Europeans gather. We stayed a couple of hours, long enough to get a flavour of the evening without drinking away our dignity like some present. Our taxi driver back to the hotel thought our decision wise.

“Things get a little rowdy later on,” he informed us, with what I suspect was a hint of understatement, before launching into a detailed and unprompted analysis of Alex Ferguson’s retirement, which had been announced a couple of days earlier. Whatever you think of professional football, the Premier League is surely one of our most successful cultural exports, and invaluable as the universal language of taxi driver small talk. 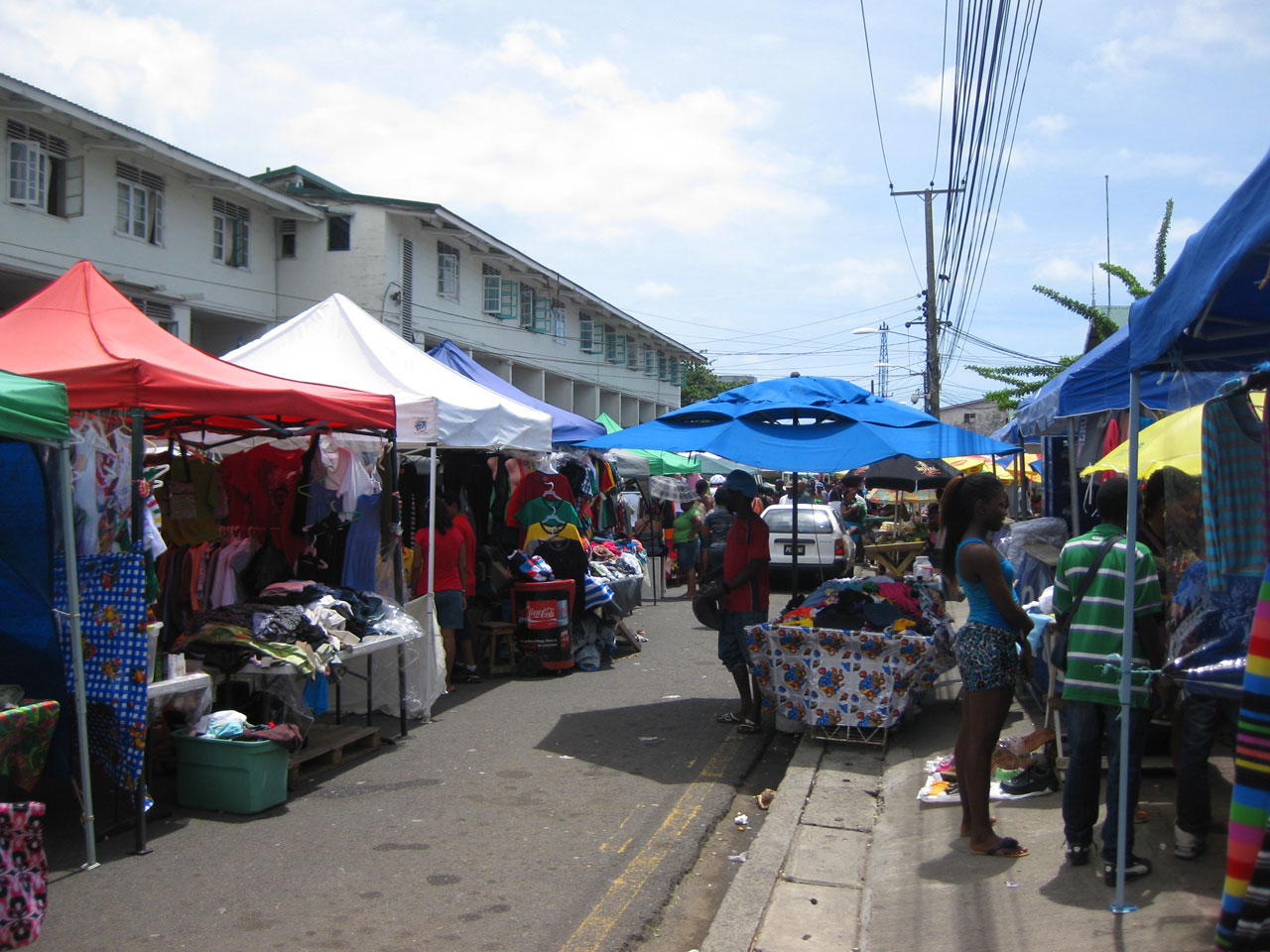 Caribbean capital cities always seem to come as something of a surprise to me, and I sometimes wonder if they’re really necessary. It seems a little sacrilegious to sully the air of the tropics with traffic fumes, to cover the lush green hills with heat-absorbing tarmac. Nevertheless, I found Castries, Saint Lucia’s petite capital, to be a pleasant enough place. It was another sweltering day, especially inside the market hall, where I soon tired of the stalls selling postcards, spiced rum and pepper sauce. The humidity pushed me back outside, where I waited in the shade for Polly to finish browsing, and I pondered over why the city council had painted a sign on the wall telling me not to piss on it. 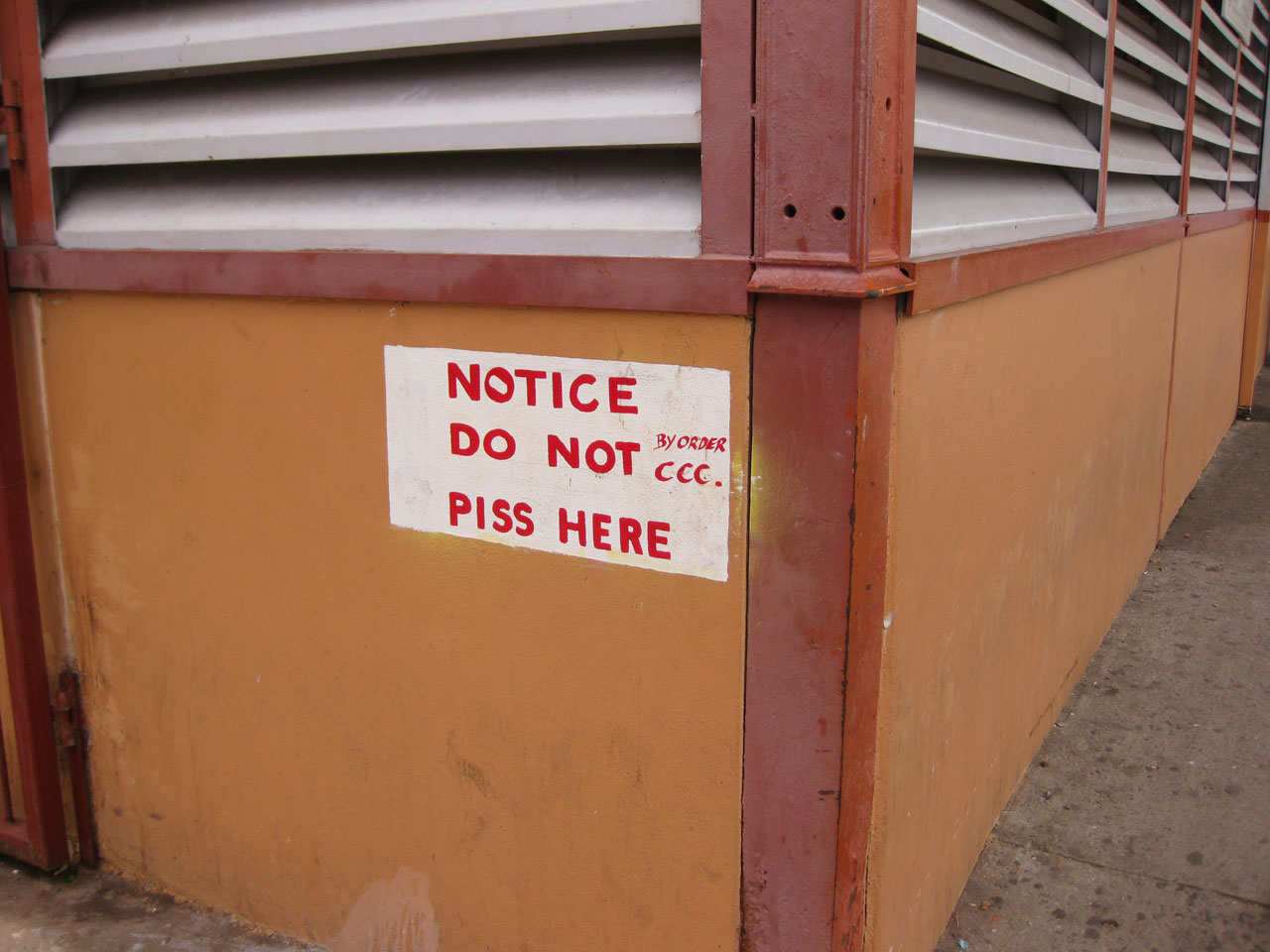 Our visit to Saint Lucia coincided with the annual [Jazz & Arts Festival](http://stluciajazz.org/" target="_blank), and there was a real buzz around the island, with a big influx of visitors from neighbouring islands. We caught some of the ‘fringe’ performances in Rodney Bay Village, but decided we couldn’t justify paying the £60 price tag for a ticket to the main event on Pigeon Island. The headliner was, as one Castries market seller we spoke to put it quite charmingly, one “Robert Kelly”, he of [Trapped in the Closet](https://youtu.be/zFosUj6A22c" target="_blank) fame. The same market trader, a silver-dreadlocked rasta peddling assorted Bob Marley tat, then launched into a bizarre but endearing monologue about the nature of love and his reflections on the institution of marriage. Everywhere we went in Saint Lucia people assumed we were on our honeymoon, and then expressed bafflement when we told them we weren’t married – I copped some considerable flak for this – but this guy was the exception, wistfully imparting his opinions on the spiritual and physical dimensions of love, and the need to follow your own path in life. Or something along those lines – by this point the midday heat was starting to boil my brain, and I was increasingly preoccupied with thoughts of the pool back at our hotel. 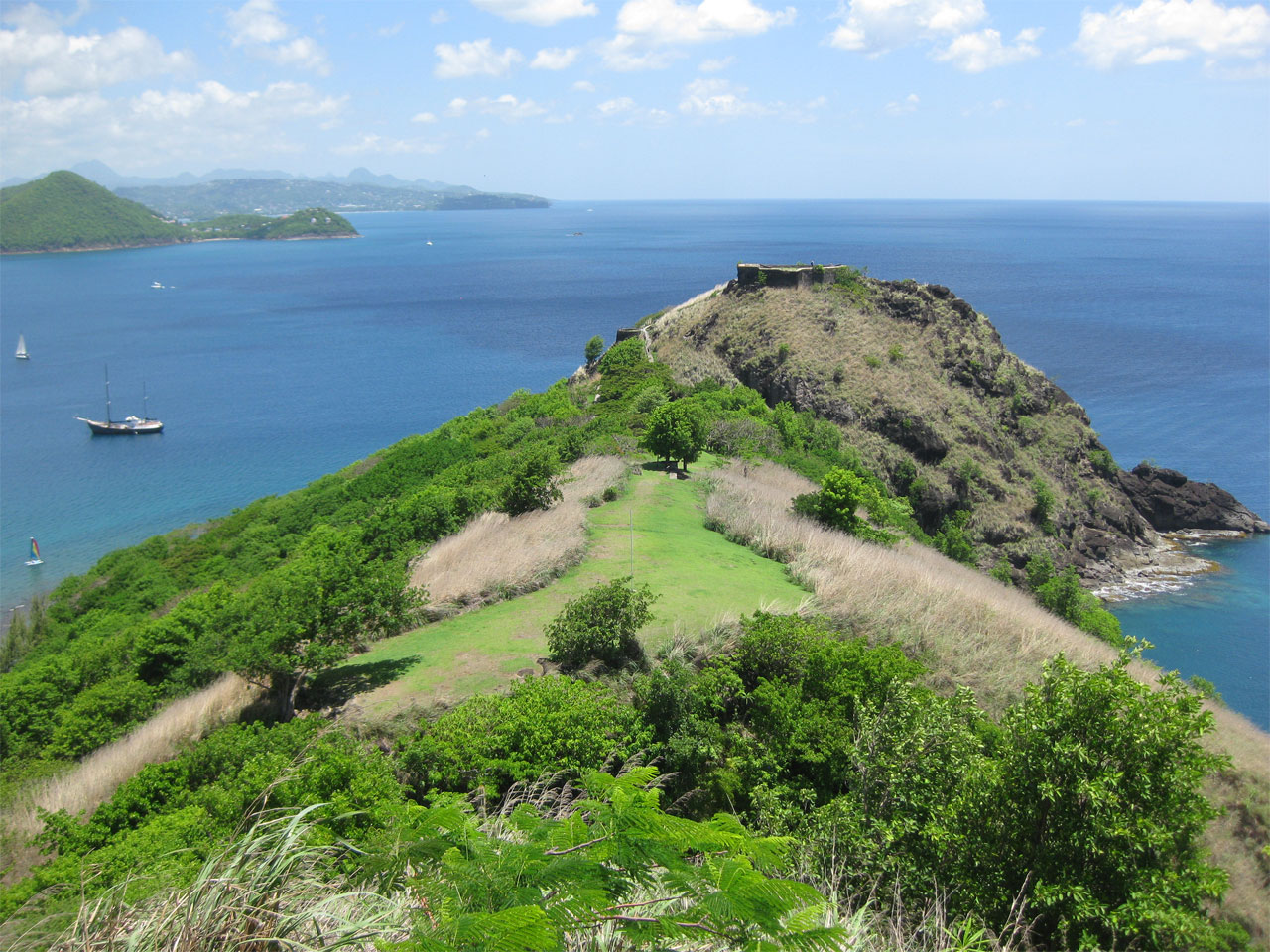 I found it hard to do anything in the Caribbean without breaking a sweat; even reading a book under the shade of a poolside parasol seemed like hard work. And yet, in spite of our morning overheating in Castries and that well-known refrain about mad dogs and Englishmen, we found ourselves a couple of days later climbing to the top of Pigeon Island National Monument, a lumpen island connected to Gros Islet by a man-made causeway, just as the sun was reaching its apex in the sky of another 30 degree day. Rather than settle for the more gentle climb to the base of Fort Rodney we picked our way up the rocks to the island’s summit, and I took in the view across the bay while bent double, sweaty locks of hair dangling in front of my face and my forehead pulsating with a prickly heat. 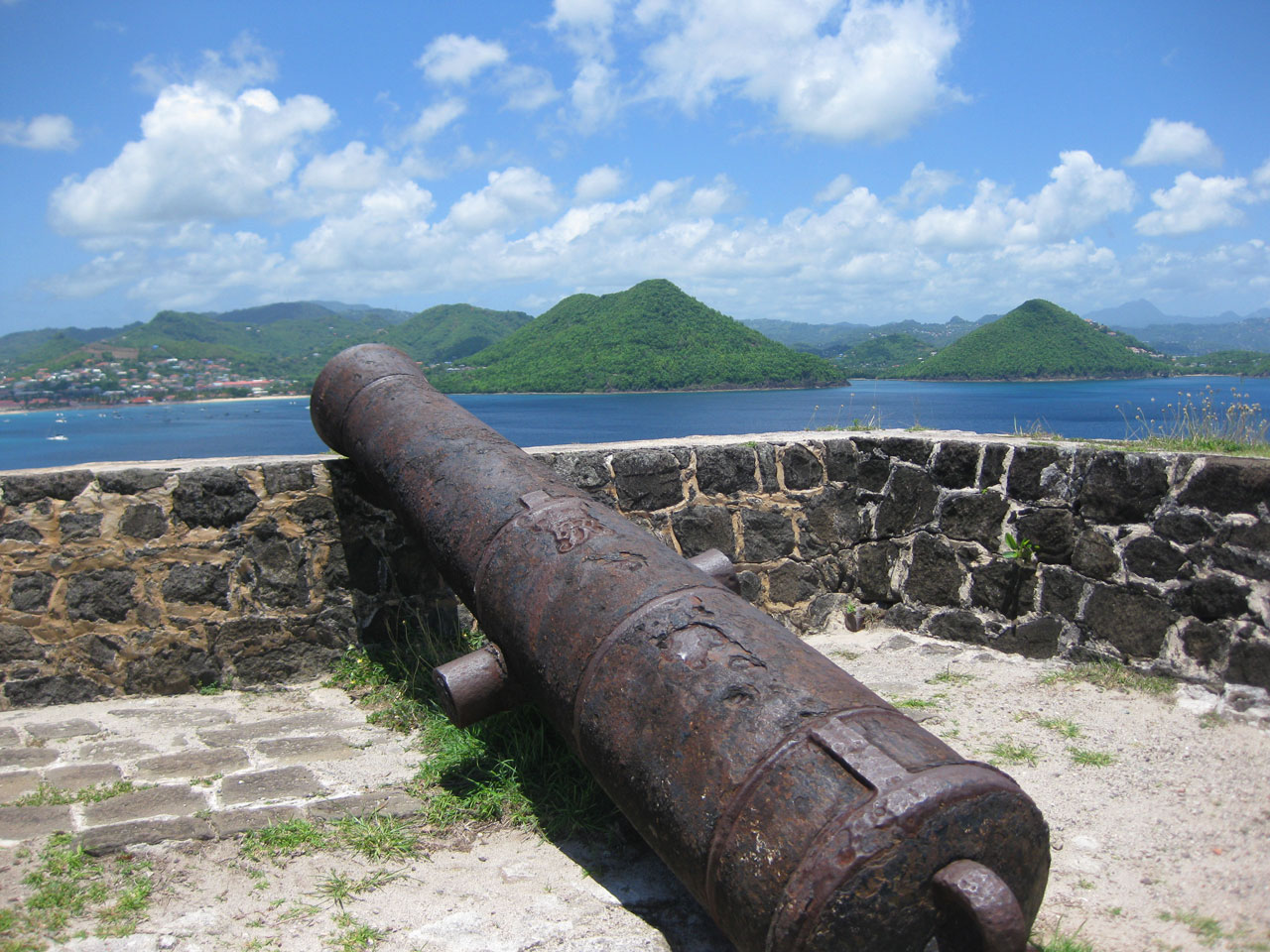 Later in the week we headed south into Saint Lucia’s rainforest-clad hinterland, and I increasingly got the sense of the island as a chunk of South America that had broken off and floated out to sea. All holiday we had been joking about the ‘majestic Pitons’, since these jagged peaks never seemed to appear in print without being prefaced by a suitably grandiose adjective; majestic, magnificent, towering, but never simply ‘the Pitons’. And finally, as our taxi rounded a bend overlooking Saint Lucia’s second city, Soufrière, these famous twins took centre stage. Majestic they certainly were, one of those sights that still impresses no matter how many times you’ve seen it in the brochure. 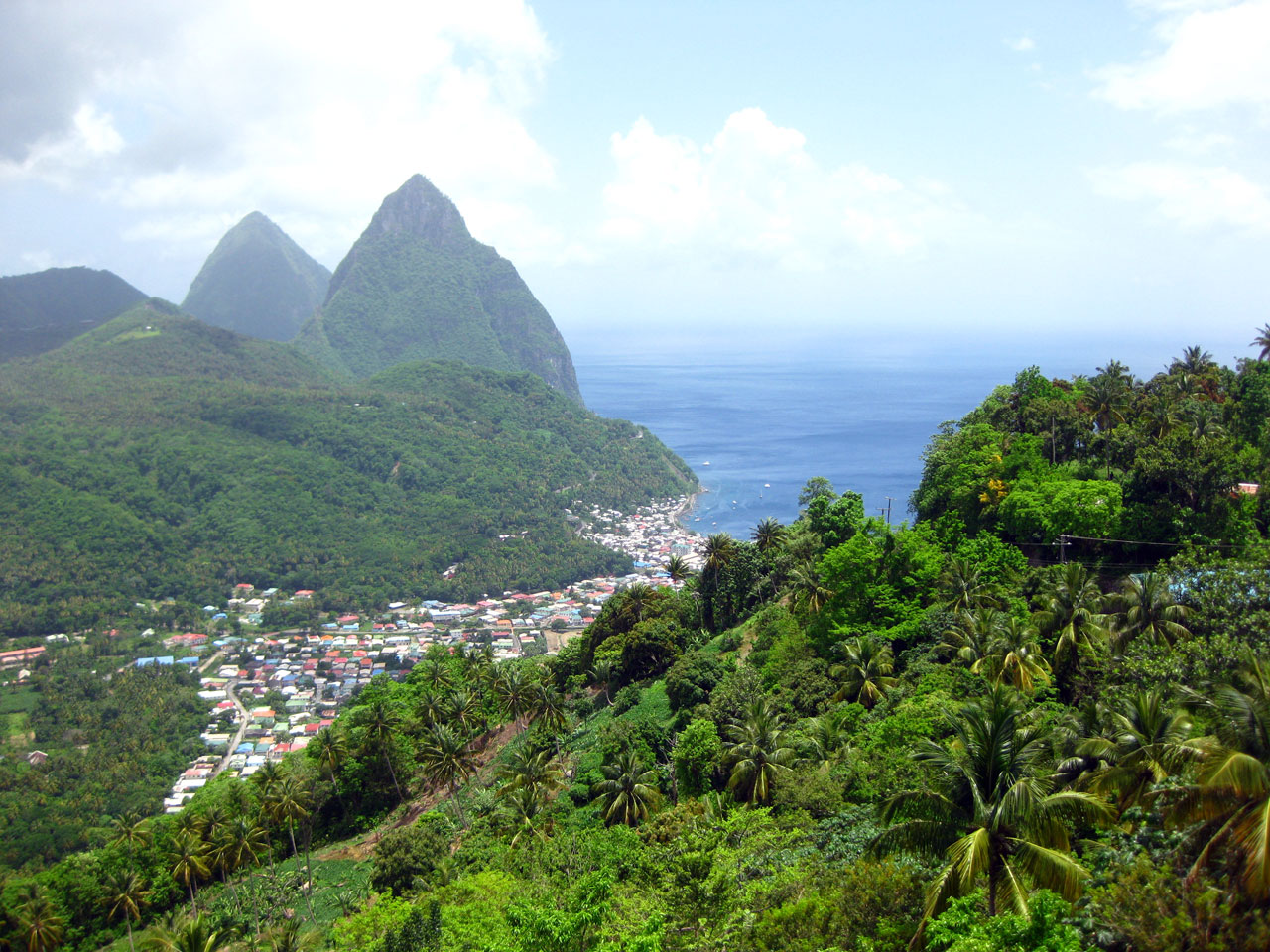 Not far from the Pitons is Saint Lucia’s ‘drive-in volcano’, sadly a little less thrilling than it sounds. The attached visitors’ centre was interesting and informative, explaining the geological processes that sculpted the island’s distinctive topography, but the crater itself was a a bit of a let-down visually, a smelly, sulphurous basin of steaming rock and bubbling water. You would be a bit disappointed – though admittedly also a bit stupid – if you arrived expecting to drive through a towering, Etna-like cone spewing molten lava. 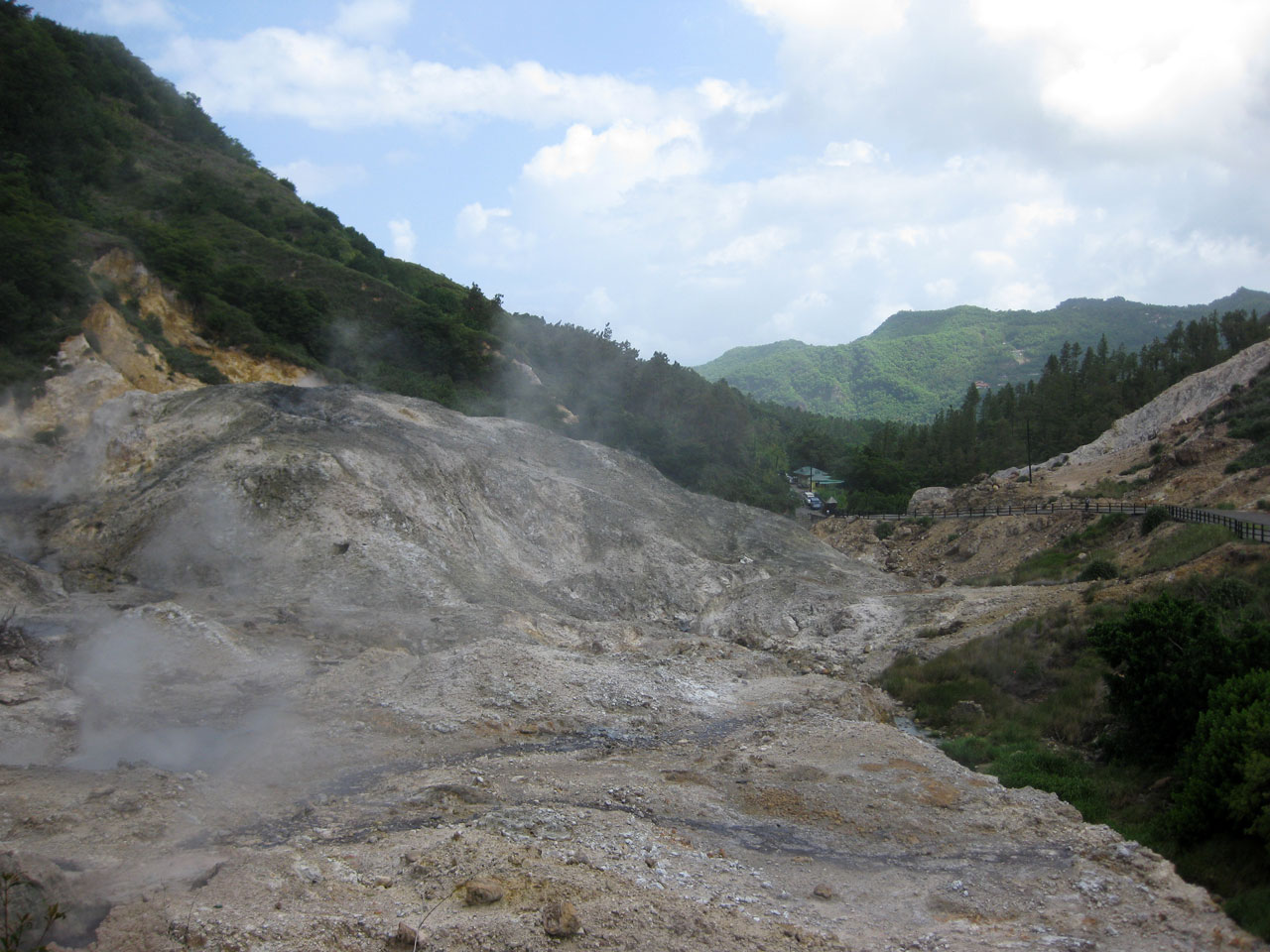 Our driver for the day was a smiley old fellow whose eyes misted over as he told us about the time he visited London, where he rode on the top deck of a bus and fulfilled his lifelong dream of travelling on a train. From the volcano he took us to the Diamond Falls Botanical Gardens, where we were shown round by perhaps the Caribbean’s worst tour guide. His tour involved leading us around the gardens at a needlessly frantic pace, sharing such insightful nuggets of botanical knowledge as “this plant looks like a face” or “this plant looks like hair”. Although, to be fair, his tour was so comically bad that it probably ensured that the half hour or so we spent learning absolutely nothing would linger longer in the memory than anything useful he could have told us about the local foliage. 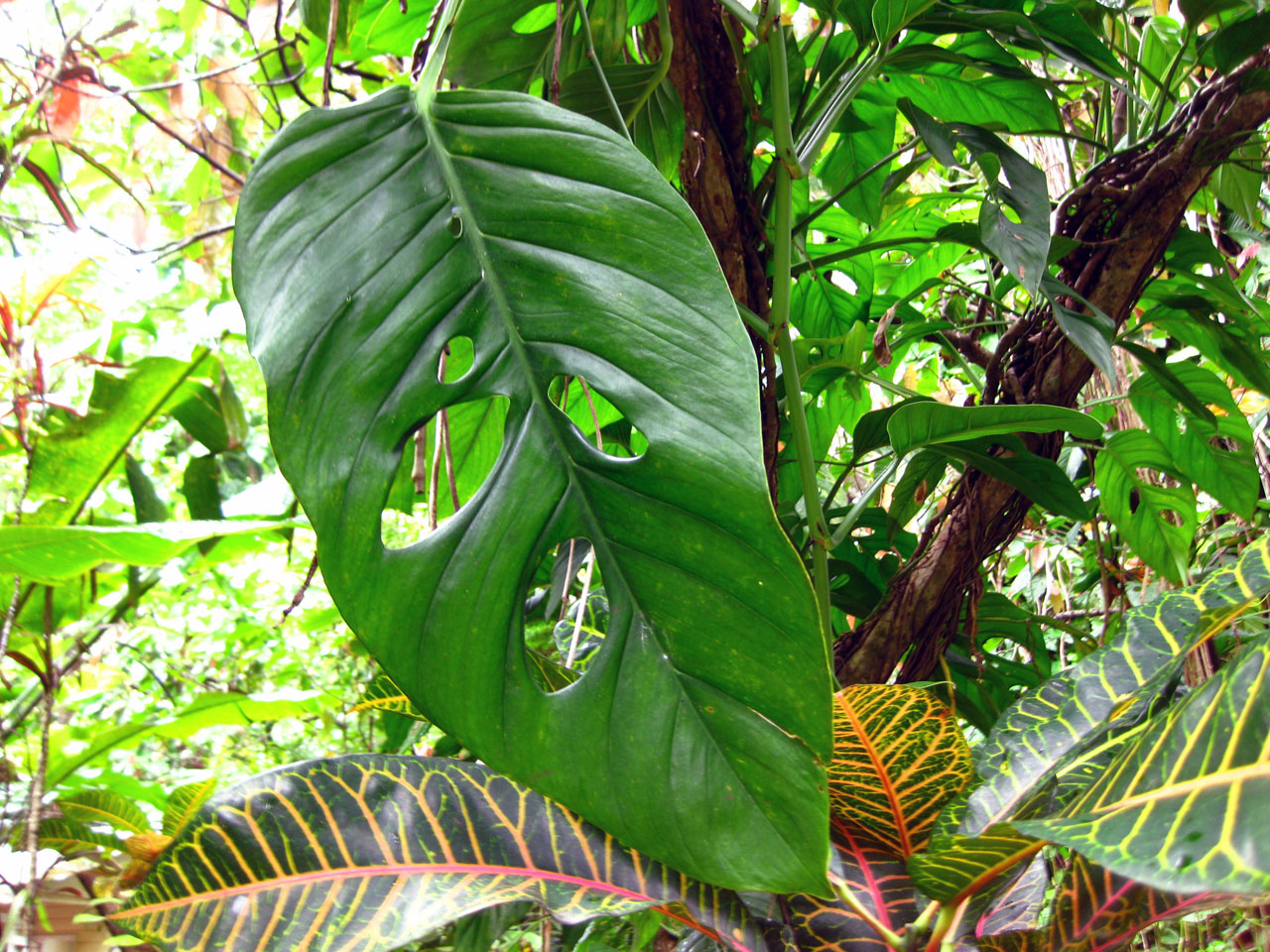 It would be easy to treat Saint Lucia as a sort of drive-through postcard, a pretty backdrop to a holiday spent cosseted in your luxury resort, but what I loved about the island was precisely that there’s so much more to it than just the beaches. I wouldn’t claim to have done any more than scratch the surface of the ‘real’ Saint Lucia, and I think that the way tourism is often set up in the Caribbean, the prevailing ‘fly and flop’ model centred around the resorts, can sometimes make it harder for more adventurous travellers to get out and connect with local people in a meaningful way. These islands are so incredibly dependent on tourism that one little bit of negative press, one robbery or accident or outbreak of disease, can cause untold damage to a small country’s brittle economy. There is almost an incentive to keep the tourists in the resorts and keep contact with the local population to a minimum, in case something goes wrong. But, on the other hand, a model of tourism that is more inclusive of local communities, and that shares the spoils more fairly, is in my opinion a more sustainable and equitable way for this region to share its undeniable treasures with the outside world.

Visiting another country is a privilege, an opportunity to learn about the culture and the people who live there; as it says on that sign outside the market in Castries, we shouldn’t piss it up the wall.

The Capital Ring Walk is a 78-mile long route around London that connects up many of the capital’s lesser known sights, broken up into 15 smaller sections. This post follows on from

There’s an election on in the UK, in case you hadn’t noticed, and questions of national identity are swirling around like never before, from the resurgent Scottish nationalism of the SNP

Not Here
—
Saint Lucia: Beyond the beach
Share this