One of the many misconceptions informing the current debate around migration and the Syrian refugee crisis is the idea that the presence of Islam in western Europe is a new phenomenon. Even a cursory glance at the history books shows that Islam has been an important part of our culture for over a thousand years, ever since the arrival of the Moors in the Iberian Peninsula in 711 AD. Eighth century Spain and Portugal were ruled not by a king in Madrid or Lisbon, but by the Ummayad Caliph in Damascus, and it wasn’t until the fall of the Emirate of Granada in 1492 that Muslim rule in Iberia came to an end. There are still plenty of reminders of Spain’s Islamic heritage scattered around the country, and not just on the mainland. The Balearic islands of Ibiza, Mallorca, Menorca and Formentera were all ruled by the Moors, and earlier this month we found ourselves in Mallorca’s capital, Palma, a city once known by the Arabic name of Madina Mayurqa. 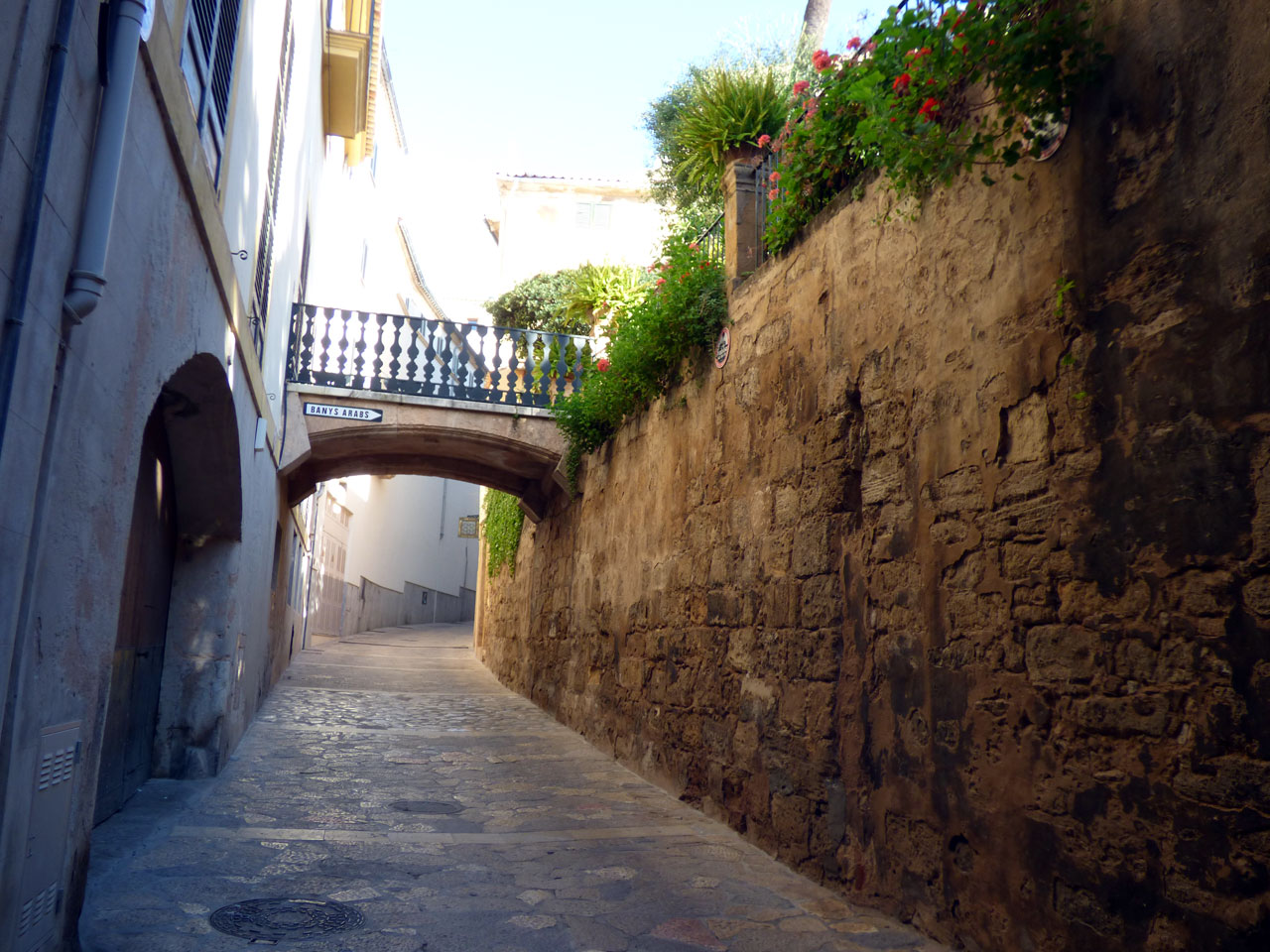 The narrow streets and ochre facades of Palma’s old town still have a discernible Moorish feel to them, and it’s here that you can find one of the few surviving examples of Muslim architecture on Mallorca, the old Arab baths. An unremarkable door in a stone wall leads off a quiet street into a tranquil courtyard, which we more or less had to ourselves on the day that we visited. The bath house itself dates back to around the tenth century, and the arches and doorways are clearly Islamic in style, the domed structure reminiscent of a Turkish hammam. In the entrance hall a badly translated video playing on a loop attempted to contextualise the cold stones around us and bring Muslim Mallorca to life, but really the place is no more than a lingering ghost of the civilisation that once held sway here. 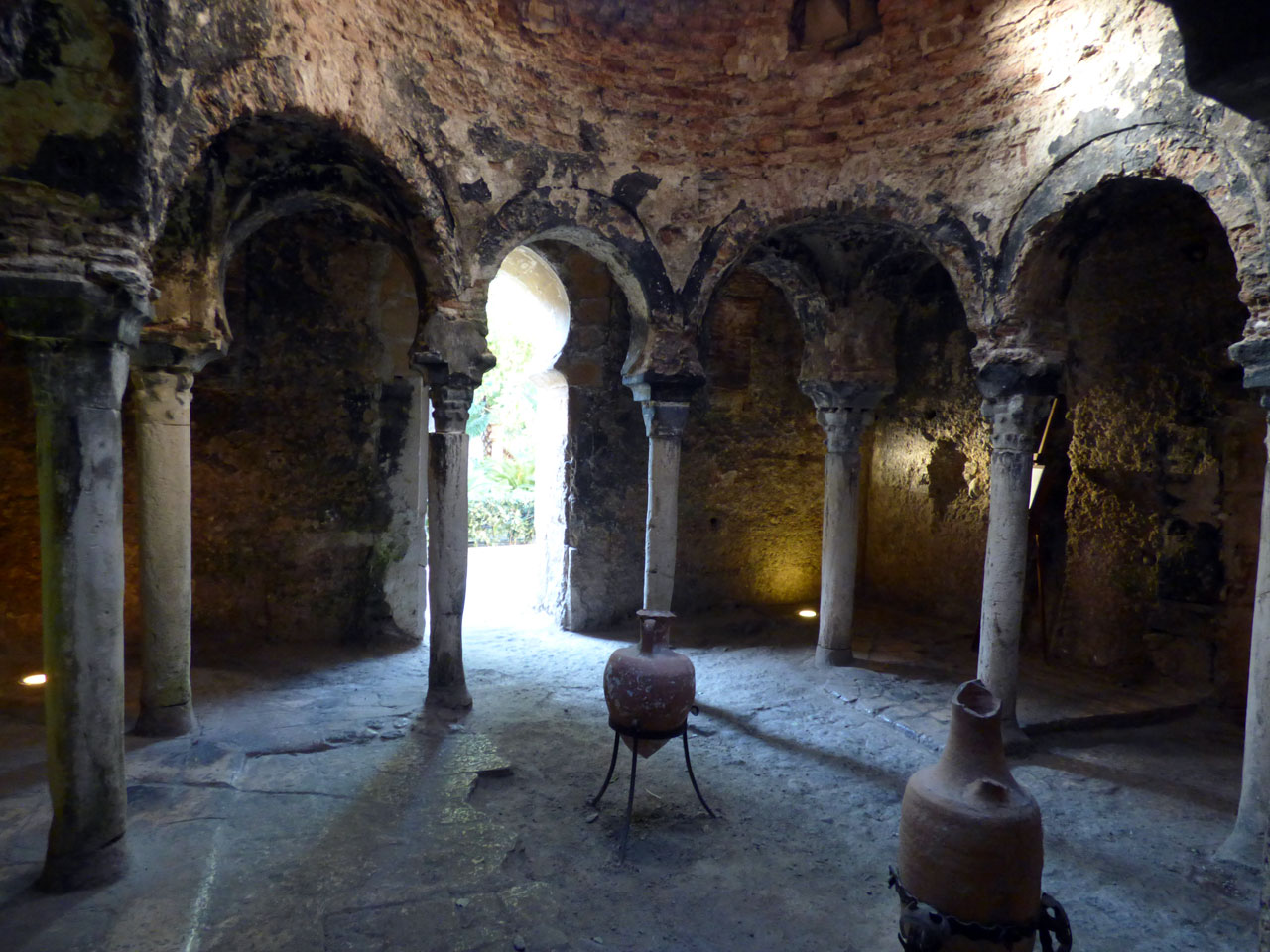 Thoughts of Islamic Spain receded as we zigzagged north towards the Plaça Major, the streets widening out a little and Christmas decorations glittering overhead. A delicatessen lured us in with an enticing array of Spanish sausage, a panoply of pork products that wouldn’t have gone down too well with the caliphs of old. We tried tiny morsels of Manchego cheese, chunks of chorizo and bread topped with sobrassada, a type of cured sausage particular to the Balearic islands which is soft enough to use as a spread.

Spread across the Plaça Major itself was a Christmas market; not quite the cosy, wintry scene you might find in the squares of Central Europe, but interesting to browse nonetheless. My eye was quickly drawn to the stalls selling the figurines that are used to populate nativity scenes, scanning the rows of shepherds and wise men for one character in particular. Sure enough, there he was: the caganer. I had first become acquainted with this peculiar Catalan tradition while living in Barcelona as a student, and I’d wondered if we’d find them on Mallorca too, given the historic links between Catalonia and the Balearic islands. 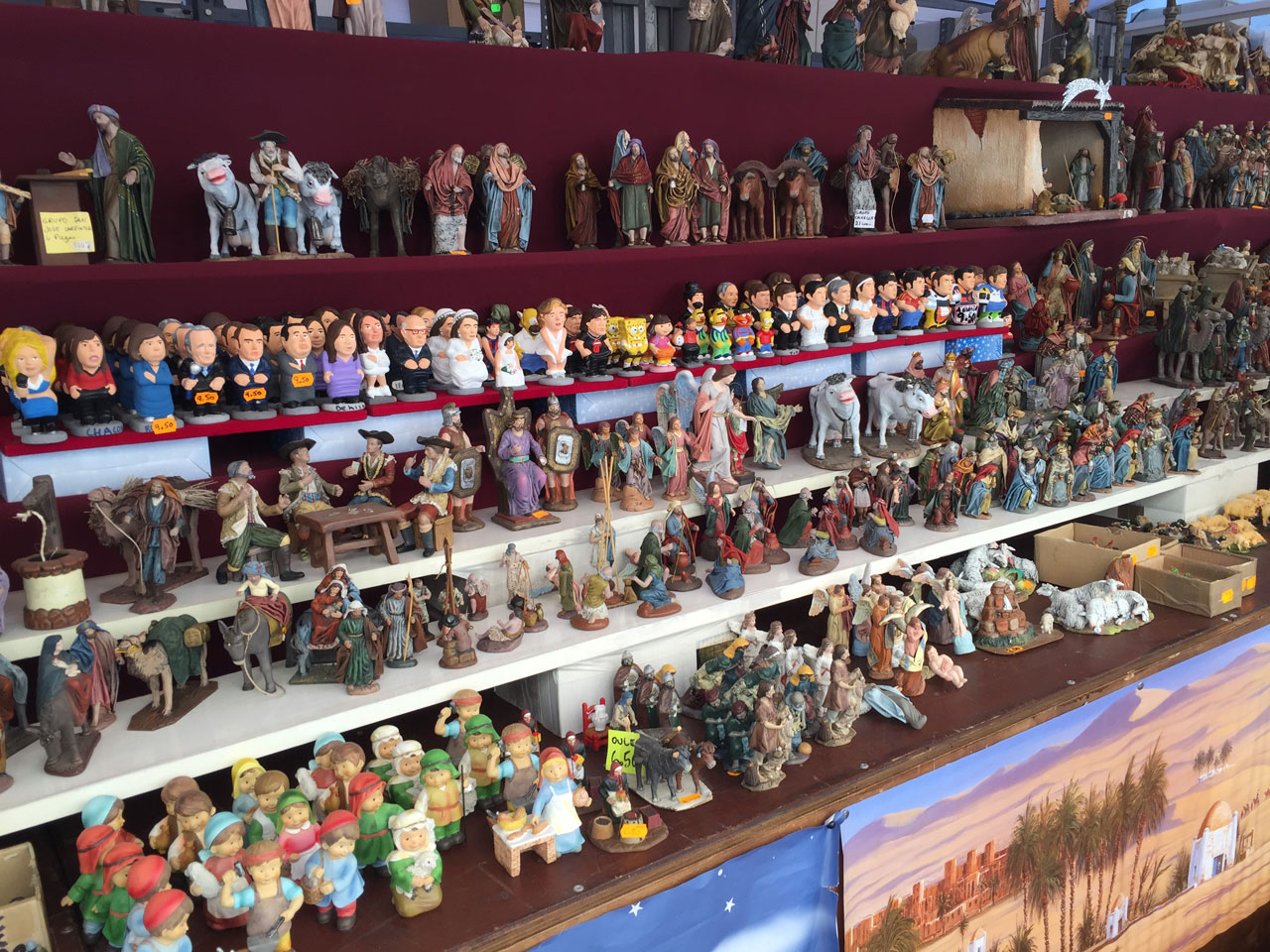 For the uninitiated, the caganer, literally the ‘shitter’ or ‘crapper’, is an additional figure included in Catalan nativity scenes, usually portrayed as a peasant squatting down and defecating on the floor. Most Catalans don’t consider this to be blasphemous or offensive, and the tradition is tolerated by the Catholic Church. While the origins of the caganer are uncertain, one explanation is that it represents the act of giving back something to the earth, fertilising the holy ground of the nativity scene. It’s just one of several scatological peculiarities to be found in Catalan culture, and at Christmas time Barcelona is full of shops and stalls selling caganers, including less traditional versions depicting Spanish celebrities, famous footballers, the Spanish royal family and even the Pope curling one out on the floor. We found a stall in Palma with a similar line in irreverent shitting figurines, and I asked the stallholder, a gruff, craggy-faced man puffing on a roll-up, whether Mallorcans share that other famous Catalan Christmas tradition, the caga tío, or ‘shitting log’.

Yes, that’s right, the ‘shitting log’. In many Catalan family homes in the weeks leading up to Christmas, a little log with a face and two spindly legs is ‘fed’ each night, covered over with a blanket to keep him warm. On Christmas day, the kids gather round and hit the log with a stick, singing songs imploring him to defecate, then they leave the room to pray for a decent haul of presents. In the meantime, the parents bring out various treats and hide them under the blanket, giving the illusion that this little anthropomorphic log has crapped out a collection of sweets, nuts and dried figs. I tried my best to explain all of this to the bemused stallholder in my rusty Spanish, a task that would have been challenging enough even if he’d spoken English, but my garbled description came out as something like “a piece of a tree in Catalonia that shits”. He looked utterly perplexed, maybe even a little bit disturbed. I can only assume that the caga tío is yet to catch on in Mallorca. 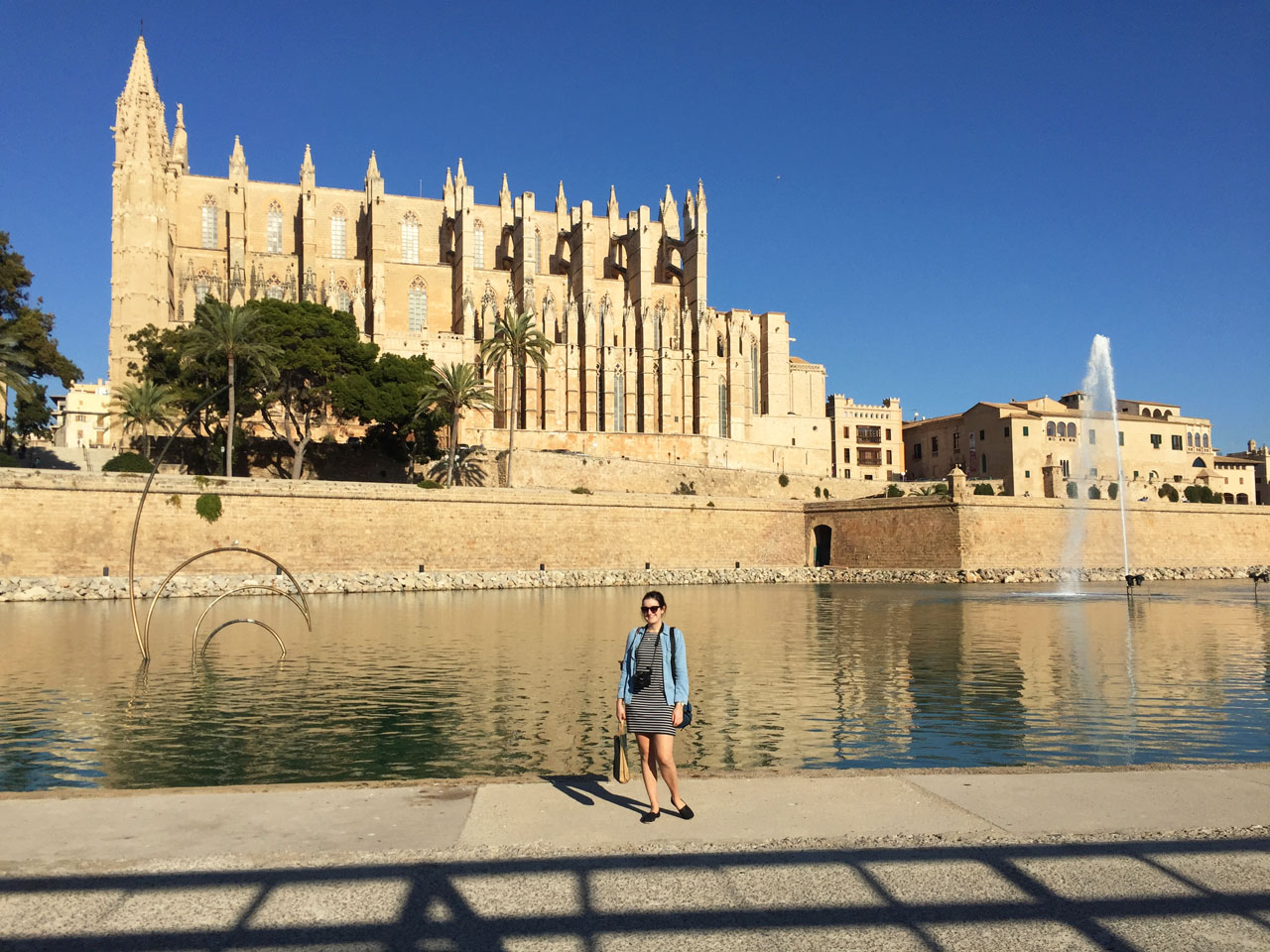 Our brief foray into the many-layered history and unusual traditions of Palma ended by the seafront, at the famous cathedral of La Seu. This vast Gothic structure seemed almost too big for a little island like Mallorca, like it should belong to a grander, more bombastic city like Barcelona or Madrid. The construction of the cathedral began in the early 1300s under King Jaume I of Aragon, and it was built on the former site of the city’s main mosque, intended to symbolise the victory of Christianity over Islam after the reconquest of the island. However, in one of the great historical ironies, the orientation of the building means that anyone kneeling to pray at the altar is not facing Jerusalem; instead, they’re facing Mecca.

As something of a compulsive travel planner, it’s not often that I turn up in a city with no idea of what to do when I get there. But Cartagena was the

I’ve been lucky enough to do quite a lot of travelling this year, but the list of places I want to visit only ever seems to get longer. I find that one

Not Here
—
Palma de Mallorca: Echoes of Islam
Share this