My first fashion faux pas in Milan was going outside without a coat on. It may have been a sizzling 25°C in the early April sun, but I felt pretty silly in my T-shirt amongst the Milanesi in their coats and scarves. To compound the matter, I'd left my sunglasses in our hotel room. Everyone in Milan wears sunglasses, from classic Ray-Bans to Harry Potter specs to bulging bug-eyed goggles. I'd always imagined Milan to be a soulless city of commerce and high fashion, looking down its nose at everyone else, and first impressions seemed to confirm my worst fears. 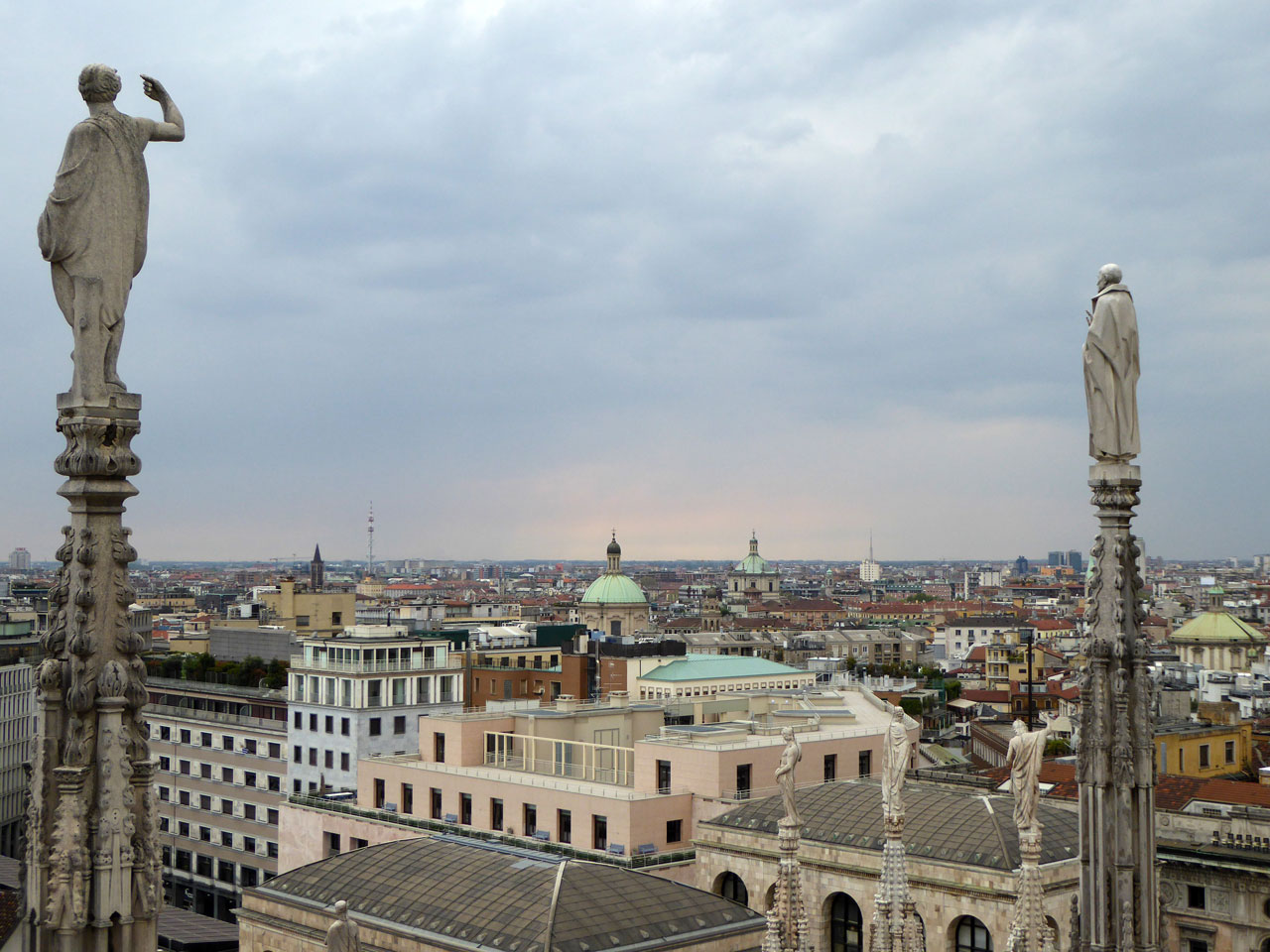 But Milan surprised me. Sitting just 20 miles to the south of the Swiss border, it's a self-assured and cosmopolitan place that feels closer to the capitals of northern Europe than the crumbling, sun-baked towns of the Mezzogiorno. The eclectic mix of architecture, with influences ranging from Neoclassicism to Fascism, reminded me of Barcelona, and the city is rich in historical significance and cultural treasures. Even the Quadrilatero della Moda, Milan's fashion district, had something to teach me - who knew that such tiny handbags could be worth so much money? 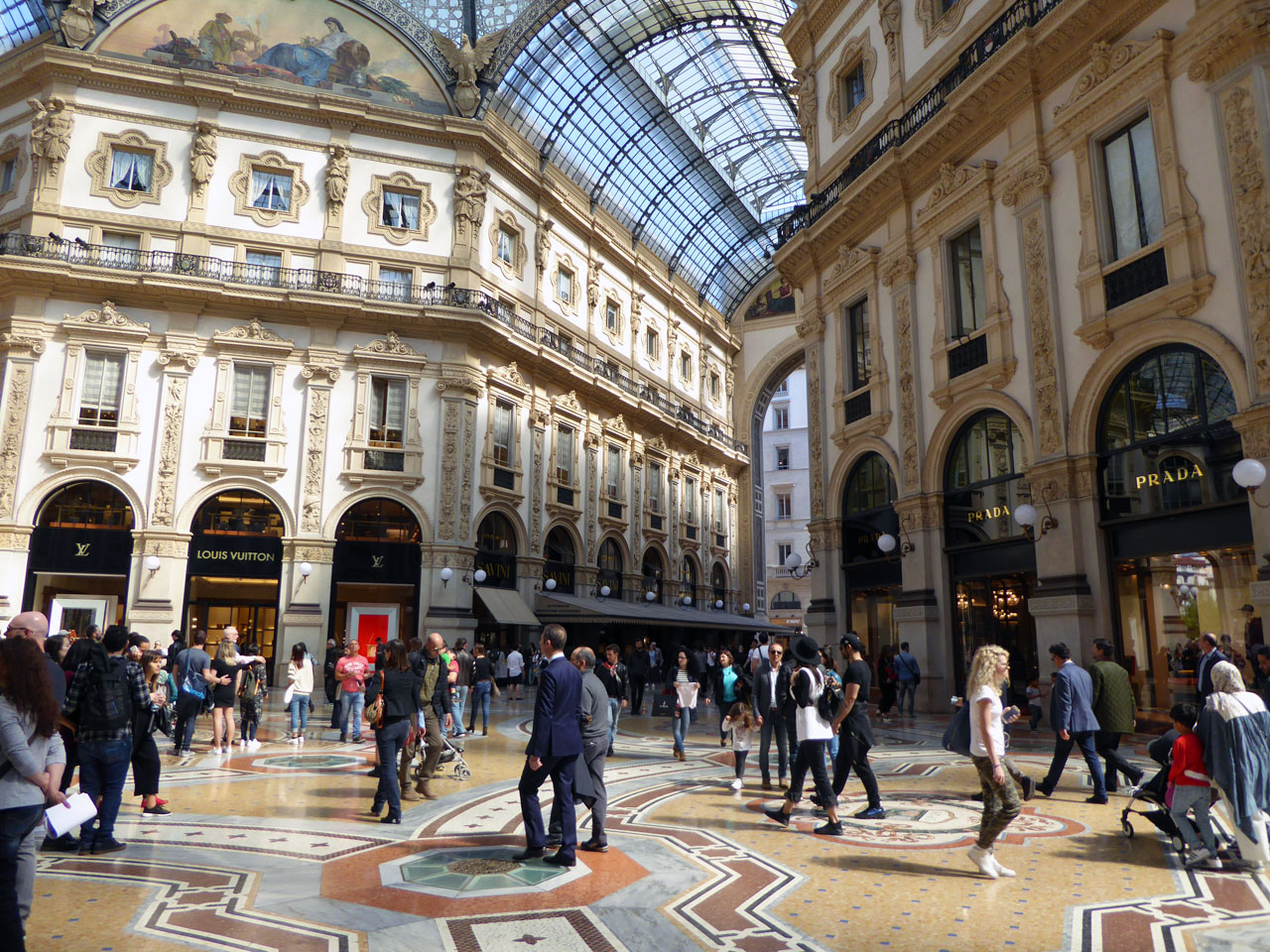 Milan's most famous shopping area is the Galleria Vittorio Emanuele II, one of the world's oldest malls. Built in the 19th century and named after the first king to unite Italy, it's a visually stunning arcade sheltered under an arched glass roof. This is prime real estate, occupied by brands including Gucci, Prada, Versace and Louis Vuitton, though it seemed like most people were there to gawp at the prices and pose for photos rather than to actually buy anything. 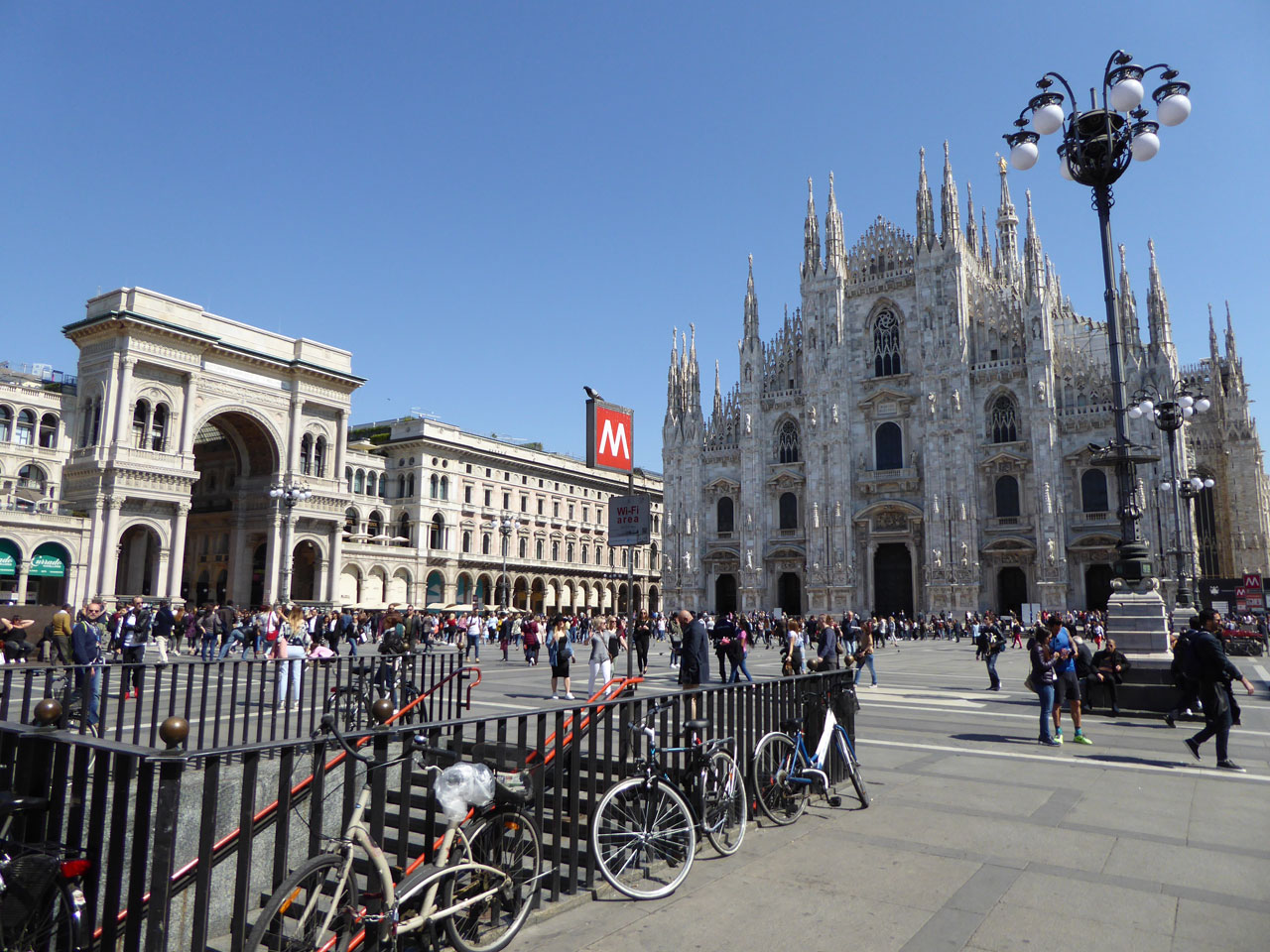 I've never understood the appeal of shopping as a leisure activity, but the Galleria is worth visiting for the architecture alone, and the arcade also connects two of Milan's most iconic squares, the Piazza della Scala and the Piazza del Duomo. The former is home to Milan's famous opera house, while the latter is the site of the Duomo, one of the most striking cathedrals I've ever seen. This brilliant white Gothic masterpiece took nearly 600 years to build, only completed in 1965, and the level of detail is mind-boggling. There is a lift that whisks you up to the roof, but we opted for the cheaper option and took the stairs, a dizzying and claustrophobic ascent. 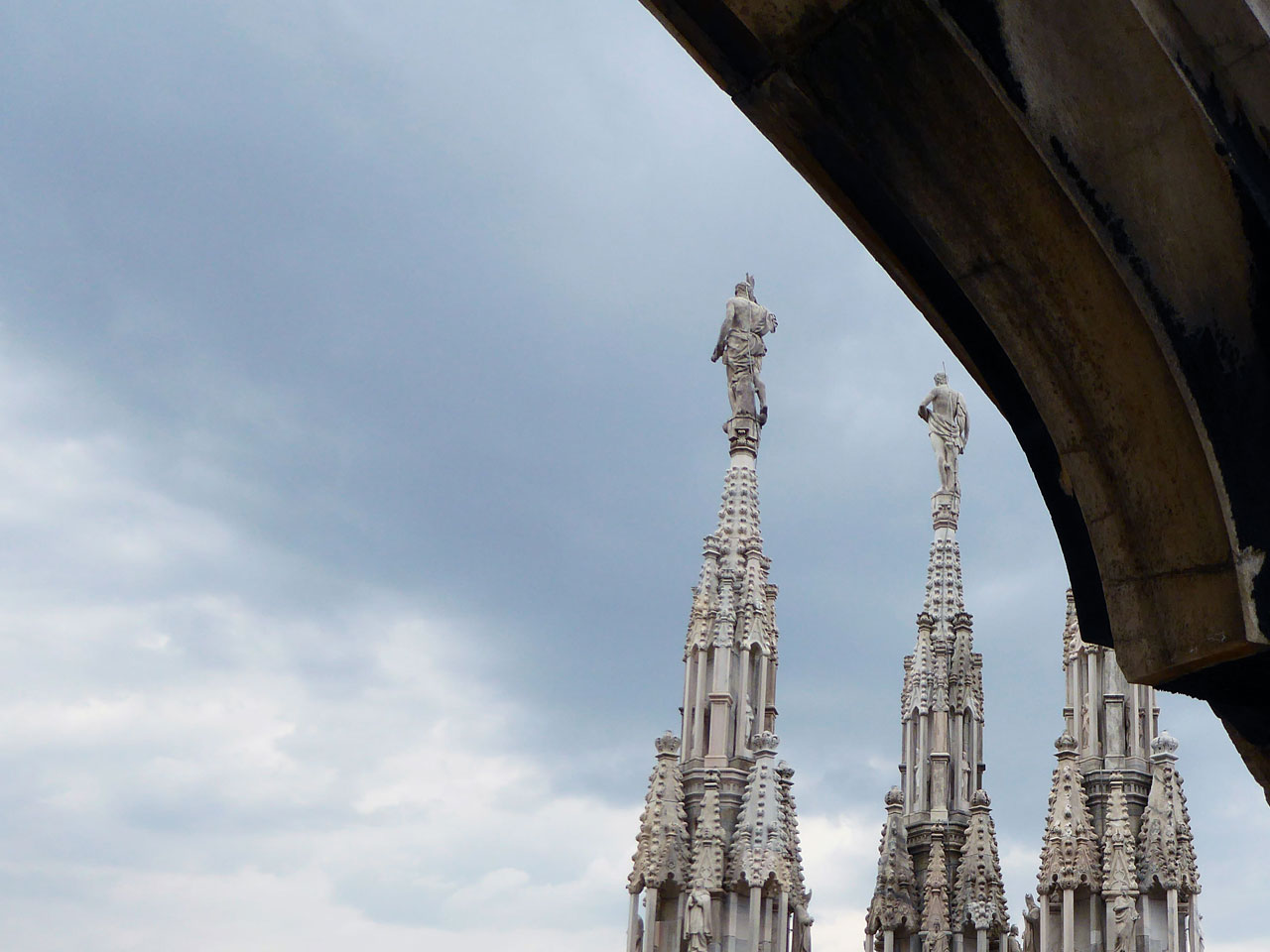 It was only once we were up on the roof that we realised that each spire and pinnacle was topped with a statue, a forest of petrified martyrs and saints, and the buttresses were embellished with organic forms rich in religious symbolism. From the northern edge of the roof we had a fine view of Milan's skyline both old and new, the shining skyscrapers of the financial district framed by the centuries old spires of the Duomo. 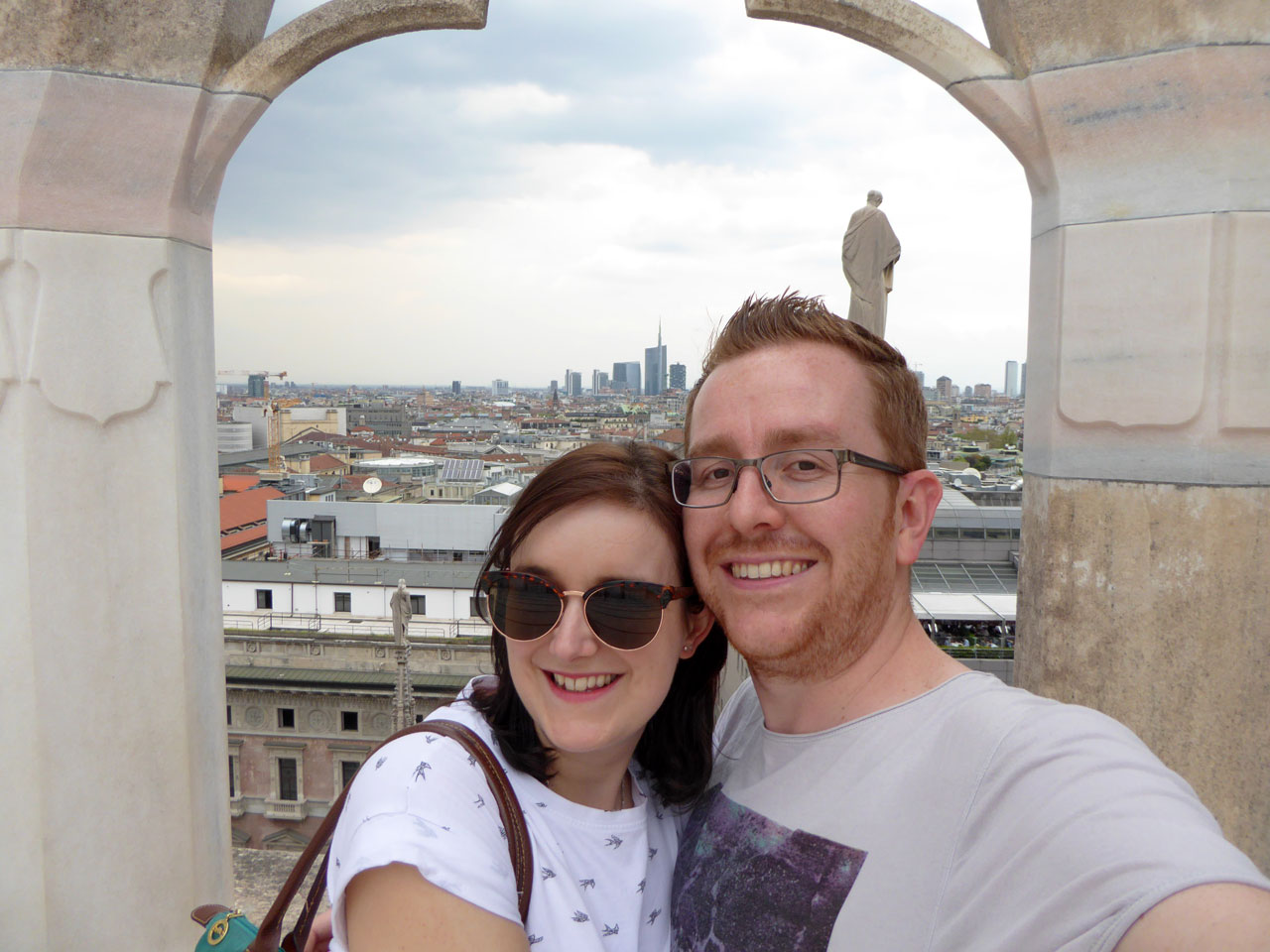 Political and economic power in this city has often been expressed through the arts, and nowhere is this more apparent than at the Pinacoteca di Brera, the city's most famous gallery. Originally a Jesuit college, this handsome palazzo was established as a cultural centre by the Austrian Empress Maria Theresa in the 18th century, though many of the artworks now on display were plundered from churches and monasteries by the armies of Napoleon. There is a nude statue of the great general himself in the palace courtyard, depicted as 'Mars the Peacemaker' by the sculptor Antonio Canova, complete with staff, toga and a fig leaf covering his Bonapartes. 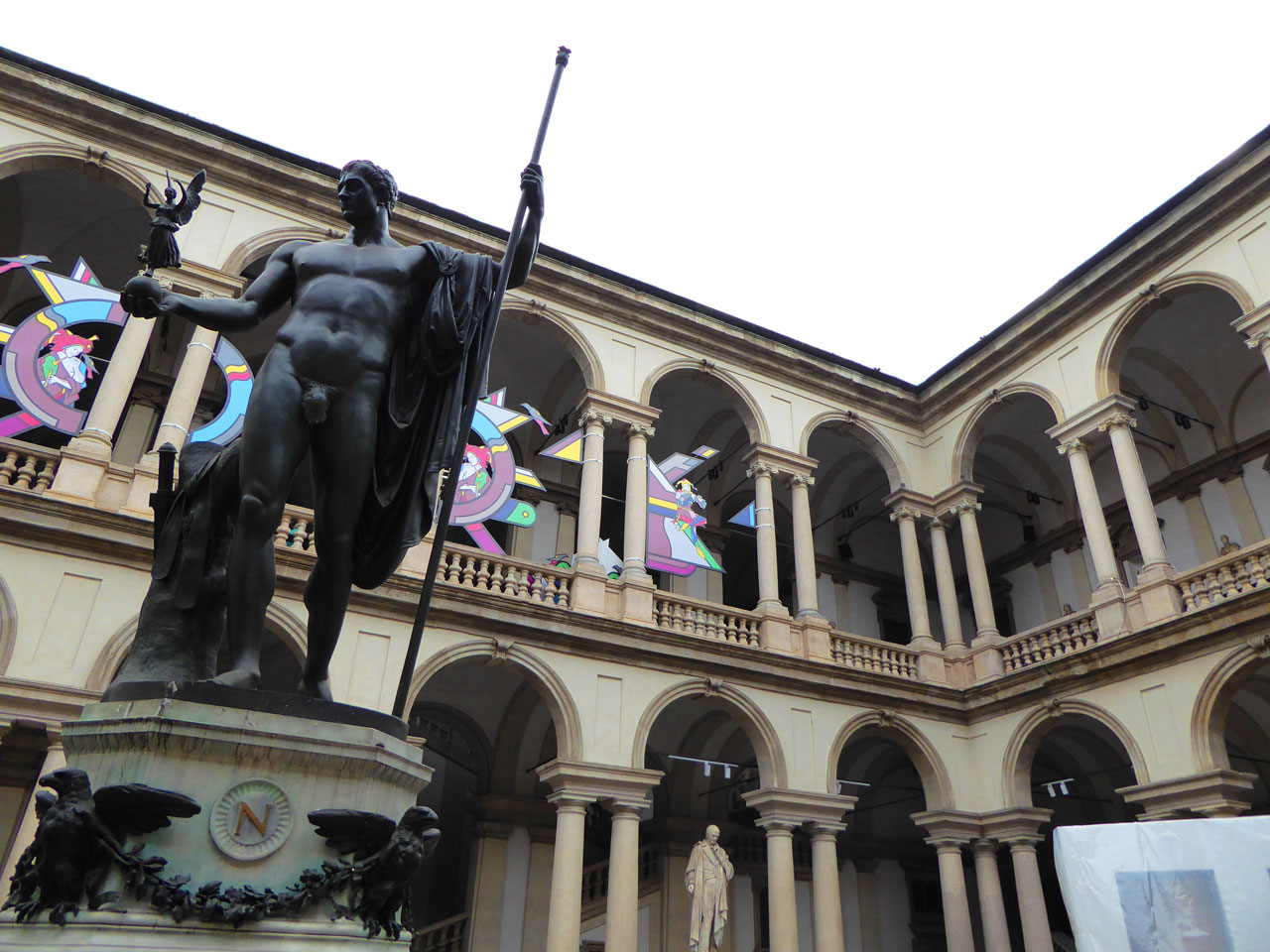 The Pinacoteca is home to masterpieces by artists including Raphael, Caravaggio and Reubens, as well as works by countless Italian painters that I'd never heard of. The most striking thing about the collection is the overwhelmingly religious nature of the subject matter. Although this is not surprising given that most of the paintings were looted from the Church, there was a numbing quality to the endless Bible scenes and depictions of Jesus. After a while I began to filter out the subjects of each painting and found myself focusing on the subtle background details instead, often heavy with symbolism: the lily representing purity, the pomegranate denoting wisdom, or the ostrich egg as a metaphor for Creation. 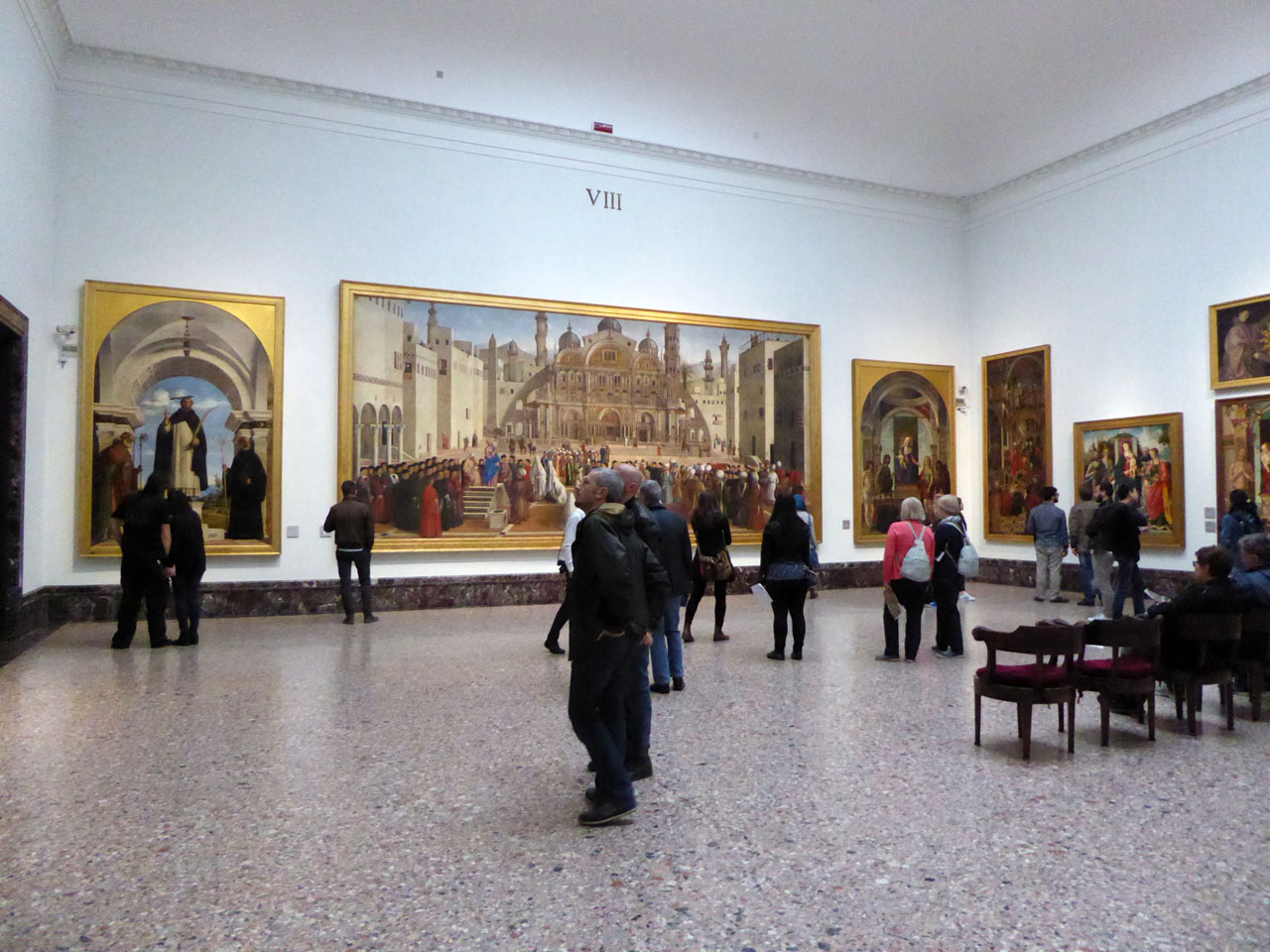 The surrounding neighourhood, Brera, was my favourite part of the city. The narrow pedestrianised streets off the Via Brera were filled with cafés and restaurants spilling out into the sunshine, and there was a friendly buzz that was far removed from the aloof and haughty city that I had expected to find. Brera bills itself as the 'Design District', and there were plenty of quirky boutiques and stalls selling everything from artisan chocolates to bathroom fixtures. 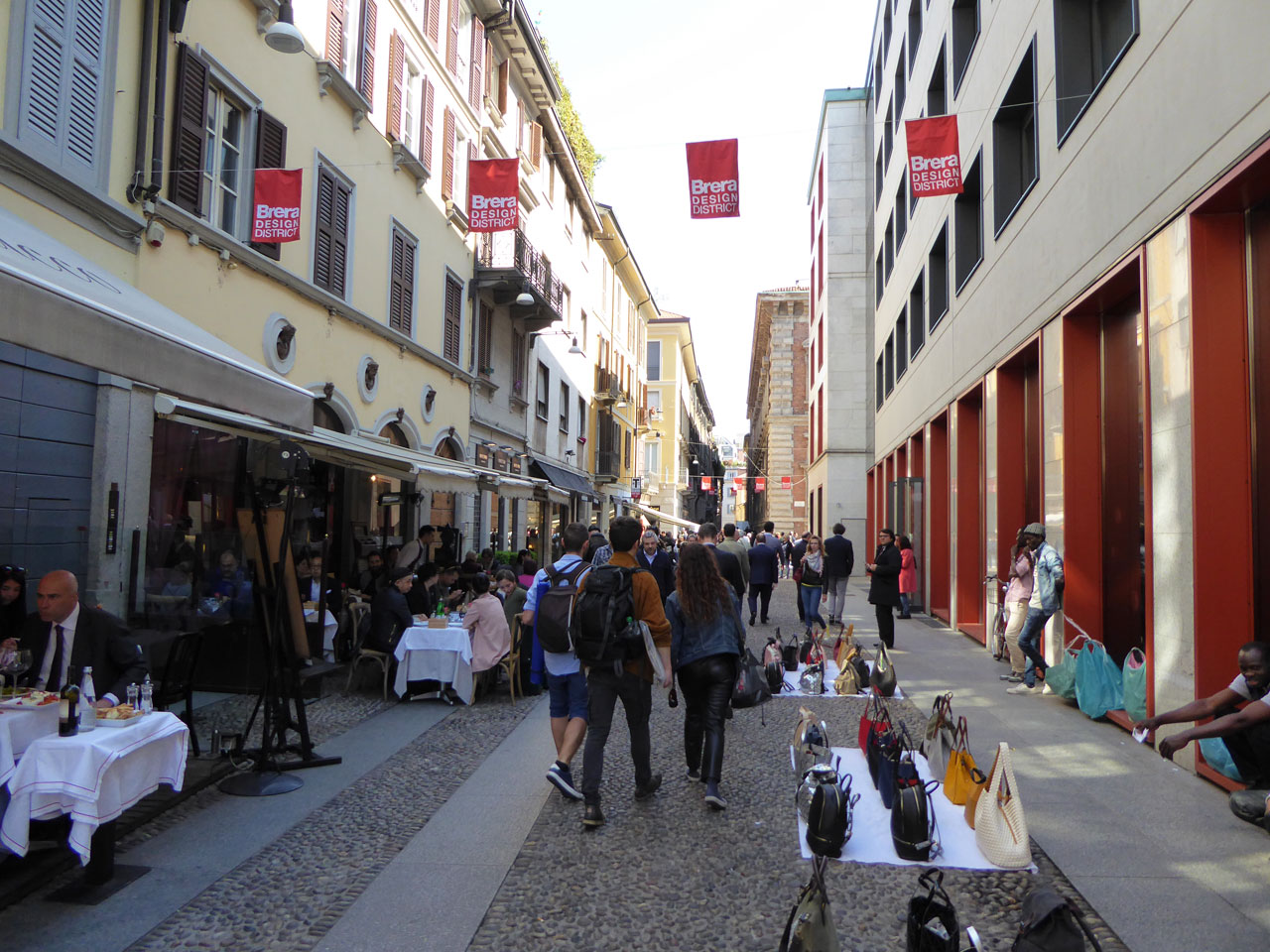 At the western edge of Brera is the sprawling Castello Sforzesco, named after the Duke of Milan, Francesco Sforza, who built it in the 15th century. Over the years the castle has been renovated, redesigned and enlarged by various occupying powers, with the input of artisans including Leonardo da Vinci, and it was one of the many grand buildings in Milan that took me by surprise. Perhaps this says more about my own ignorance than anything else, but I just hadn't expected Milan to be such an attractive and interesting city. 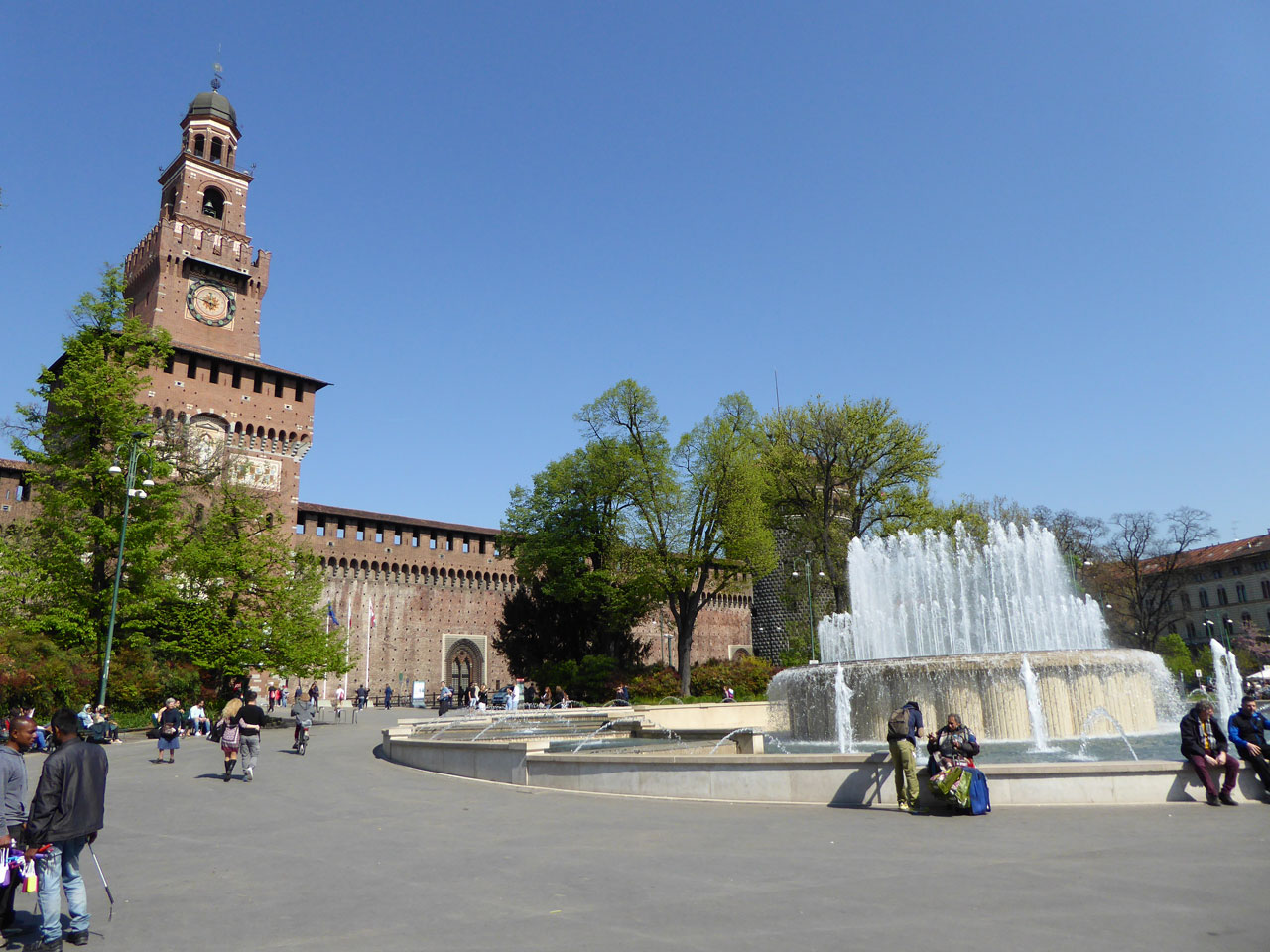 On our last morning in Milan we headed south to the Navigli district. The Navigli was originally a system of five navigable canals, radiating out from the city centre. Much of the canal system was filled in at the beginning of the 1930s, but the neighbourhood around the two surviving canals is undergoing the sort of hipster-driven urban renewal that will be familiar to residents of most large European cities. We went for a walk along the Naviglio Grande, and while it's not exactly Venice, the old canalside buildings and cobbled streets still looked pretty picturesque in the morning sunlight. The area had a grittier character than the spotless streets to the north of the Duomo, and the young Milanesi sat by the canal sipping on their morning coffee were a different sort of stylish to the fashionistas with their Gucci handbags. 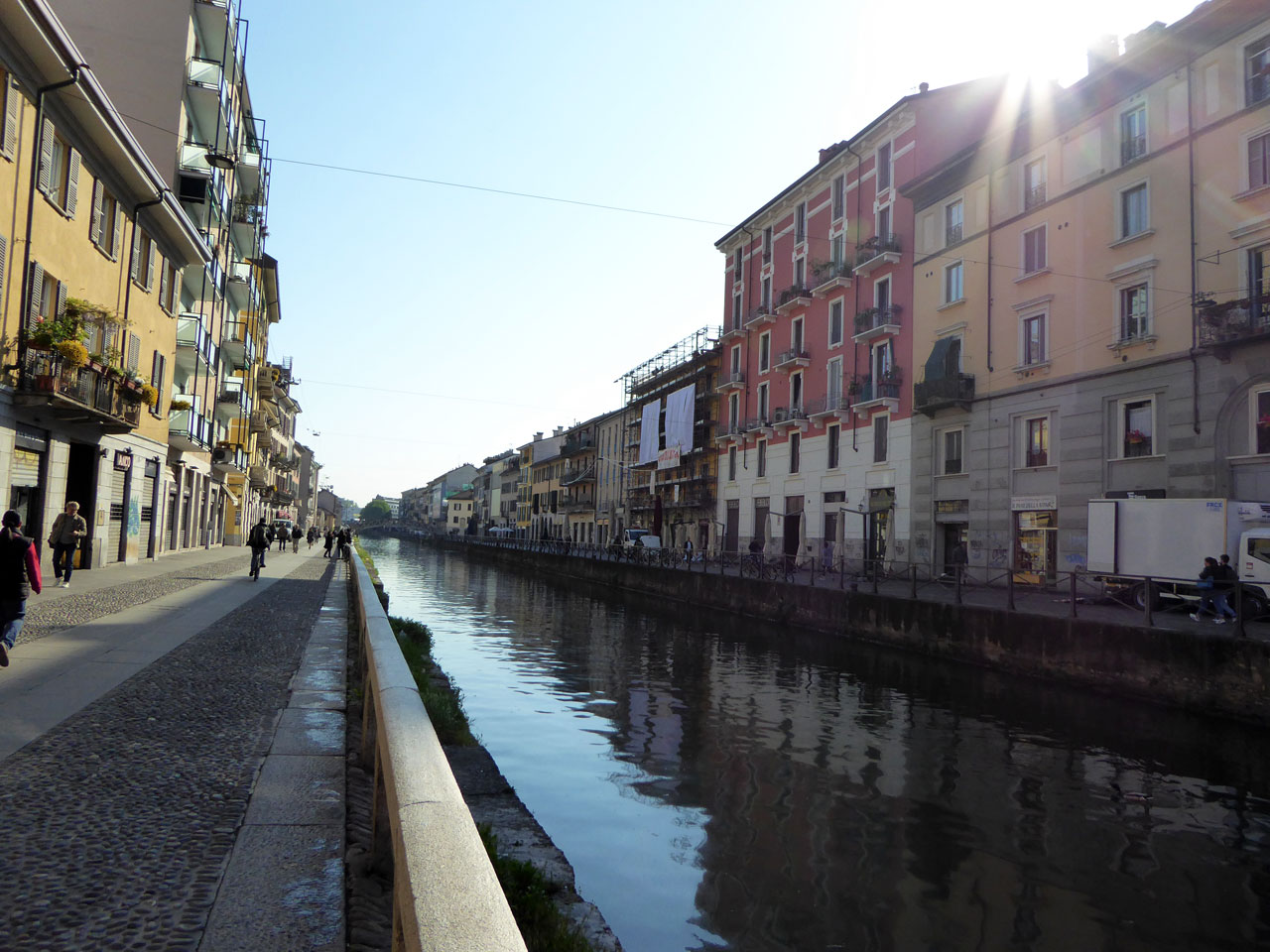 Navigli is a popular spot for the evening aperitivo, a daily ritual in Milan. As the sun goes down, the tables fill with locals enjoying a glass of wine or an Aperol Spritz, munching on snacks and catching up with friends. And as the sun set on our own brief stay in Milan, I was left with the feeling that we had barely scratched the surface of this surprising city, and that we would have to come back for another aperitivo soon.

Making the most of Milan

Here are a few tips we picked up during our weekend in Milan, including some money-saving ideas to make your budget go further in what can be a pretty pricey city...

"I'm sure she's there somewhere," said Kaizer ruefully as the jeep bounced down the dusty road, heading south away from the river. "I think maybe we'll see her later."

It was a crisp and ruddy-cheeked Friday afternoon, the last weekend before Christmas, and Ghent was glowing with that cosy chocolate box cheer that British cities are never quite able to replicate. It

Not Here
—
Milan for the fashion unconscious
Share this