Kilometre zero. In Spain, all roads lead to this one point, the axis around which this fractious kingdom of independent-minded regions turns. The spot is marked by a paving stone inlaid with gold on the south side of the Puerta del Sol, Madrid’s busy central square. In many ways this stone slab represents the story of Madrid, which became Spain’s capital in 1561 for the precise reason that it lies at the geographical centre of the Iberian Peninsula. 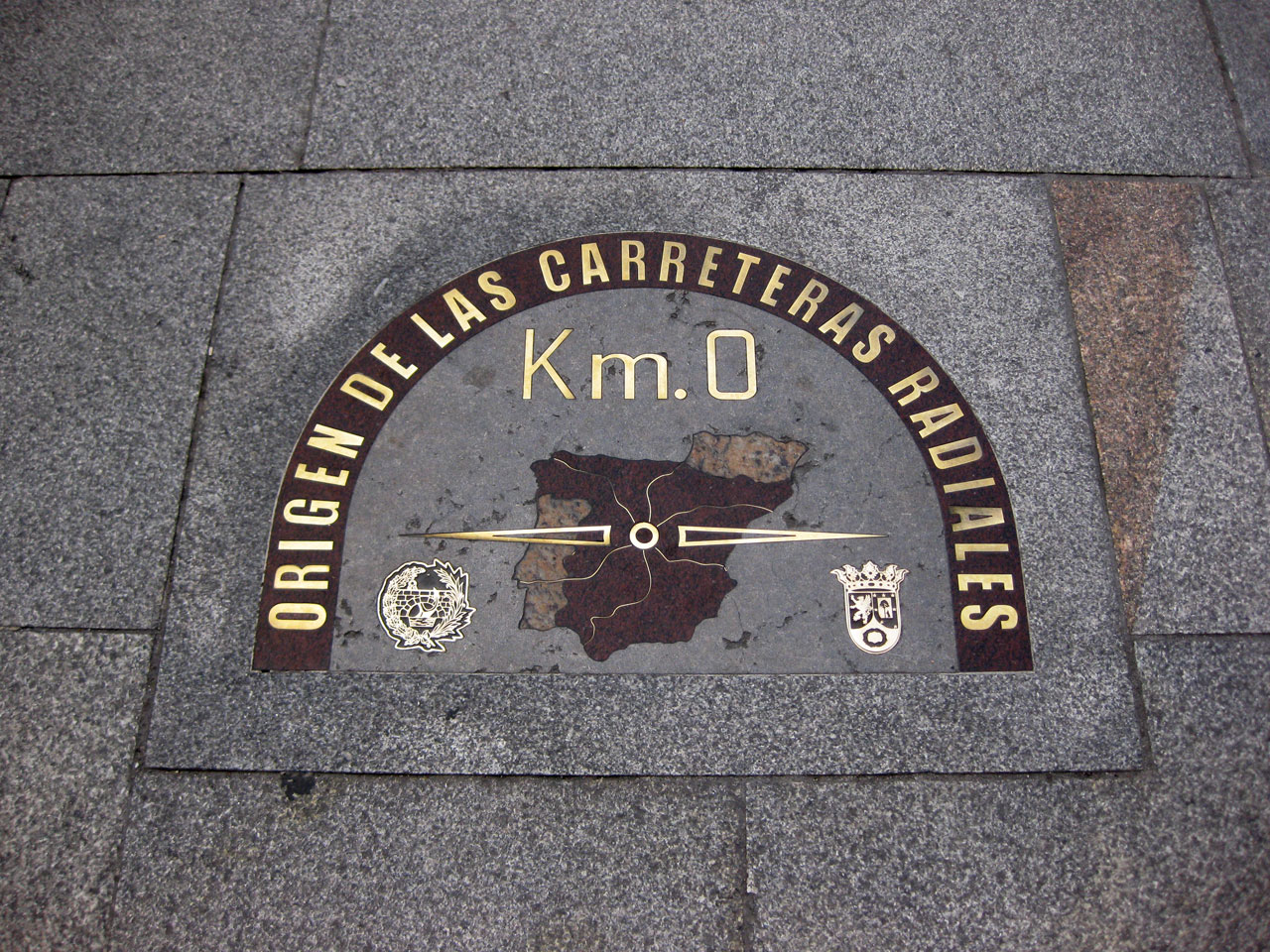 I arrived at the Puerta del Sol on a warm April day in the midst of a crisis. Battered by the global economic crash, with unemployment skyrocketing, Spain seemed diminished since my last visit. Glum-looking little men in fluorescent tabards stood holding signs reading Compro oro (‘I buy gold’), and under-employed twenty-somethings mooched about, harbingers of the Indignados protests that were to erupt just a month later.

The air of stagnation and decay was at odds with the bombastic Bourbon grandeur of central Madrid. Outside the brilliant white Royal Palace, guards on horseback trotted back and forth, resplendent in their navy blue uniforms and white feathered helmets, while tourists poked their heads through the wrought iron fence and tried to catch a glimpse of a king or queen hiding behind the curtains. 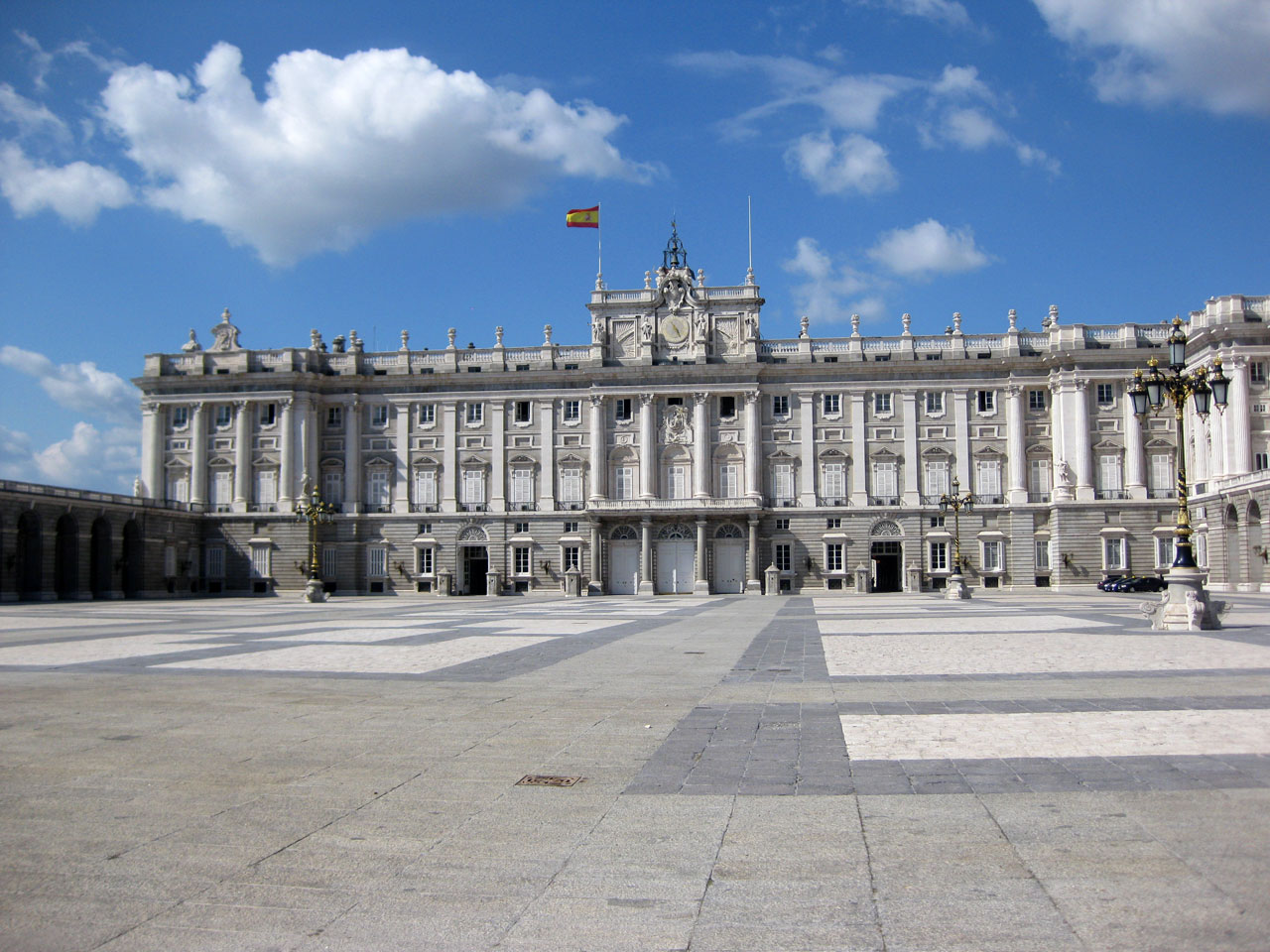 A short stroll from the palace is the Plaza Mayor, one of those glorious arcaded squares at which European cities excel. A lot of Madrid’s history has played out in this square, from the ‘trials of faith’ of the Spanish Inquisition to the coronation of kings, although the main thing that sticks in my mind is the eccentric assortment of street performers. In one corner, a glittery donkey-like creature snapped its beak at passers-by, while a portly Spanish Spiderman, something of a local celebrity, posed for photos with his lycra-clad gut bulging and quivering. Little toy helicopters buzzed overhead, the latest mass-produced crap to be shipped over from China and peddled to tourists by the city’s South Asian street sellers. 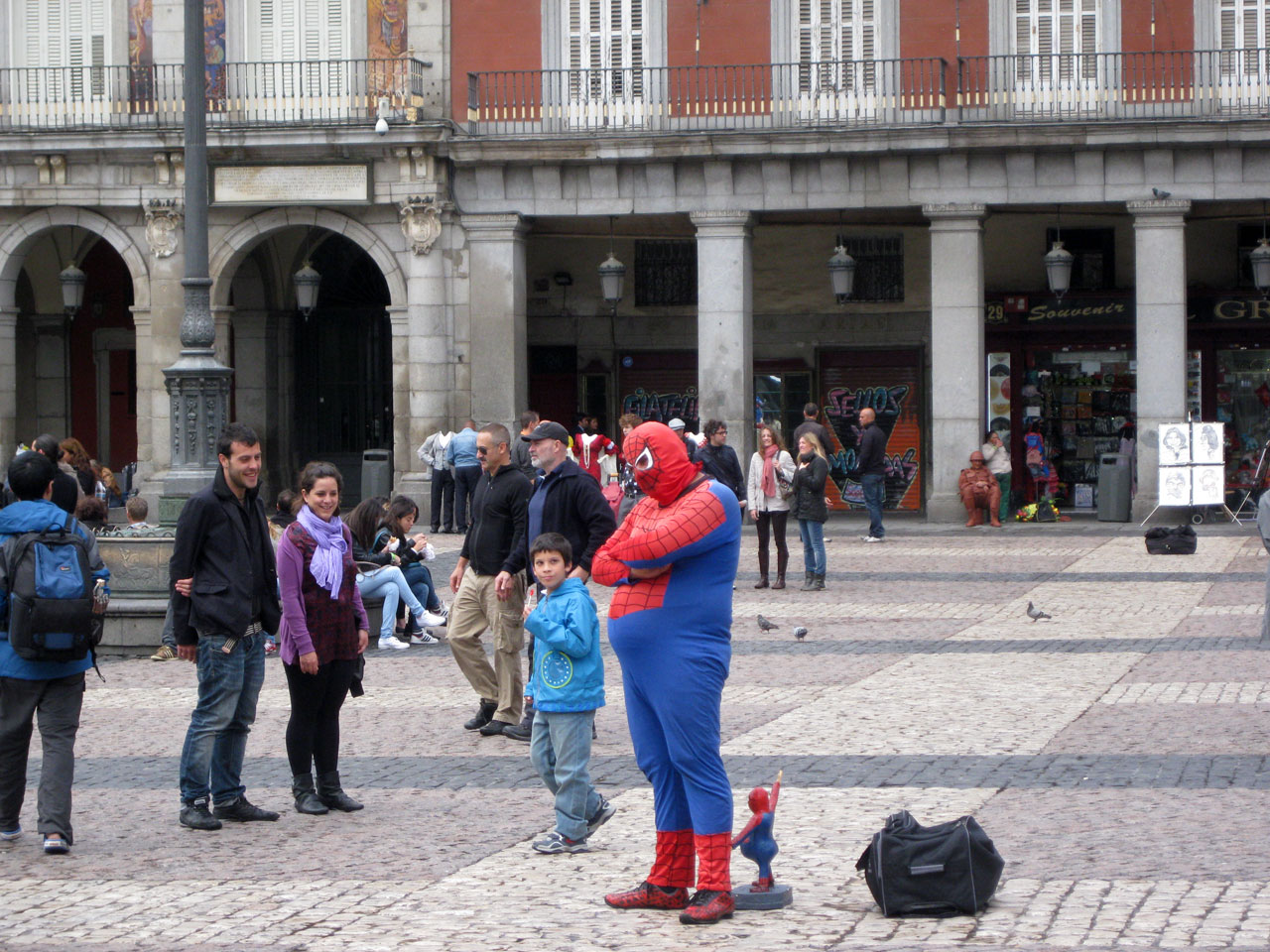 A short walk east took me from cheap crap to priceless art, and I finally got to see two paintings that had fascinated me for years. At the Museo del Prado, one of Europe’s great art galleries, I spent a long time absorbing all the warped and terrifying detail of Hieronymus Bosch’s famous 15th century triptych, The Garden of Earthly Delights. There’s a surrealist quality to the painting that seems way ahead of its time, and the longer I stared at it, the more weird and unsettling little details I noticed.

Later that day, at the Centro de Arte Reina Sofia, I found myself stood before perhaps the most famous Spanish painting of the modern era, Picasso’s Guernica. The sheer size of the canvas took me by surprise, utterly dominating the space in which it hangs, and lending the piece an oppressive air that it lacks when you see it in a book or on a website. The event which the painting depicts, the bombing of the village of Guernica by German and Italian warplanes in 1937, is significant in part because it was one of the first high profile examples of aircraft being used to indiscriminately bomb a civilian population. The significance of the painting only seems to grow over time; the tortured faces of the victims could just as easily be wartime residents of London or Dresden, innocent casualties of a drone strike in Pakistan or Yemen, or the besieged inhabitants of Homs and Aleppo. 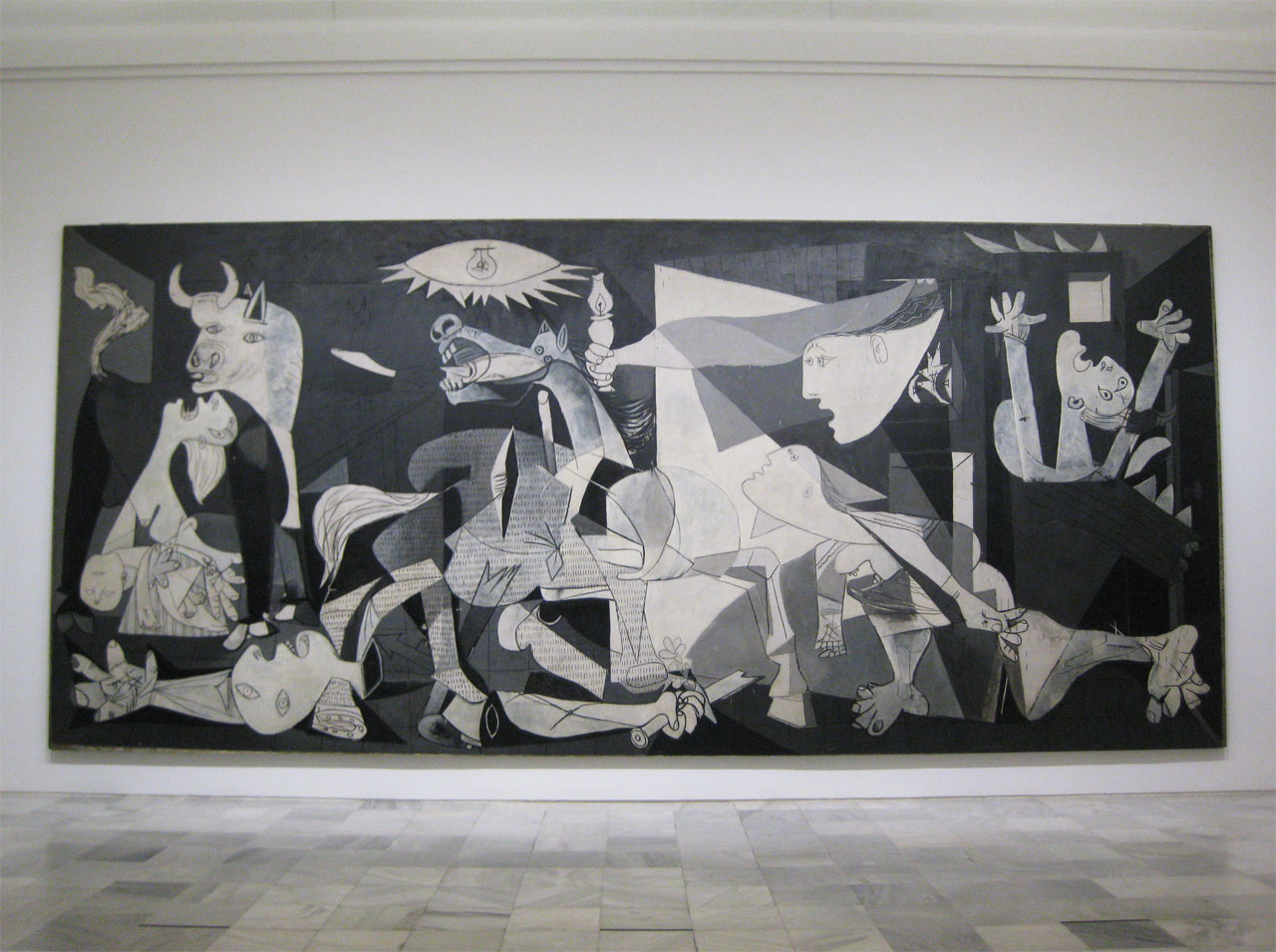 Darkness gave way to light in El Parque del Buen Retiro, the sprawling park where Madrileños come to escape the city heat. At the centre of the park is a lake where you can take a rowing boat out under the watchful gaze of King Alfonso XII, whose statue sits on horseback supported by a curving colonnade. One of the things I found strangest about Madrid was the lack of a major waterway running through the city centre, presumably because the city didn’t grow up organically alongside a river or harbour in the same way as most other European capital cities. There is a river that runs around the western side of the city, the Manzanares, but really it’s no more than a glorified stream. This lack of a central spine, of a clear focus to the city, seemed to contribute to the stifling air of Madrid’s central streets, and made the cool air around the lake all the more refreshing. 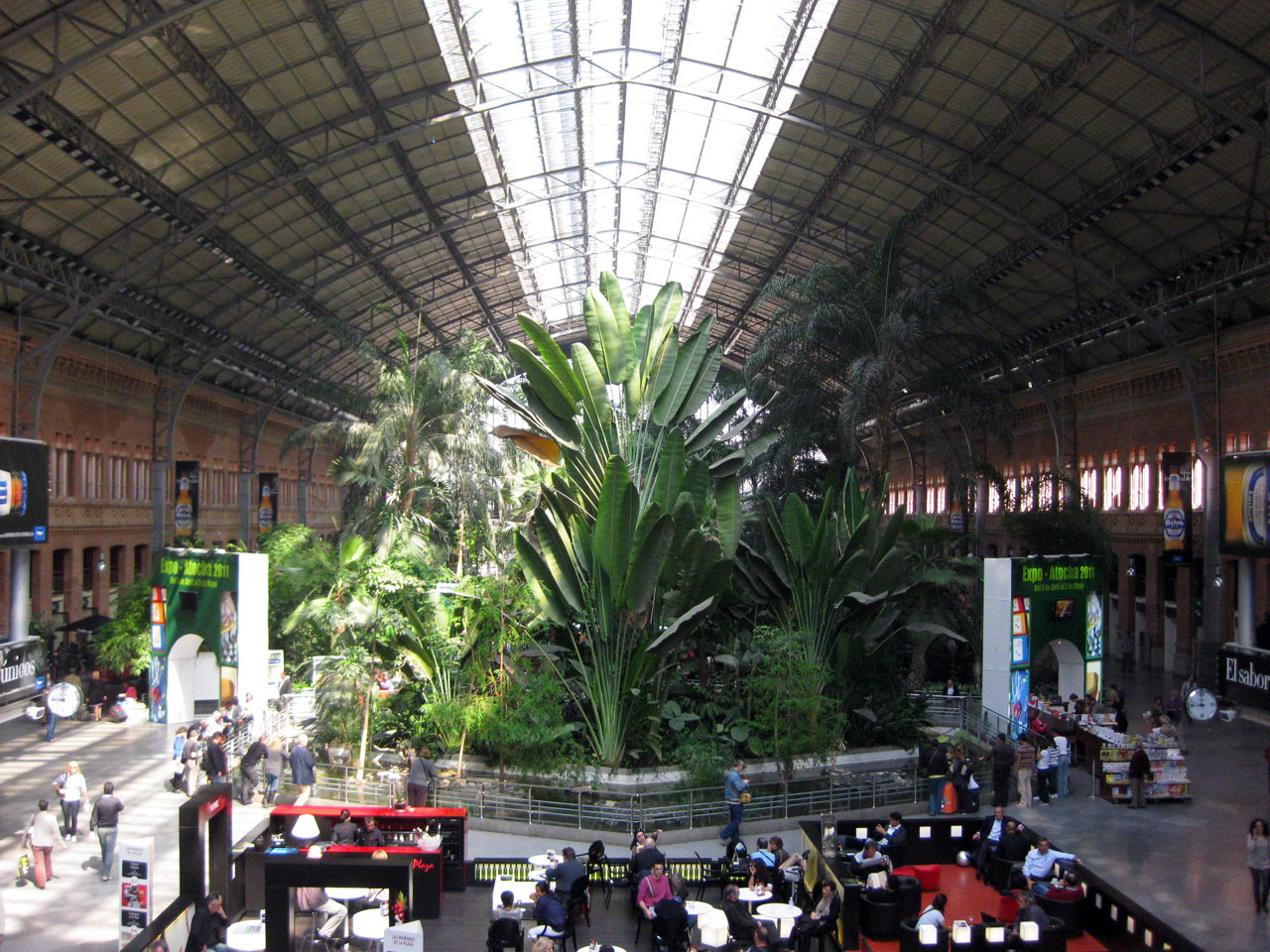 Madrid’s greenery is not limited to its parks, however, as I discovered the next day. The main railway station, Atocha, has the feel of a giant greenhouse, with tropical vegetation reaching almost to the ceiling, and pools of water filled with hundreds of little turtles. I was here because I’d decided to get out of the city for the day, and spend a few hours exploring the old Castilian capital of Toledo. 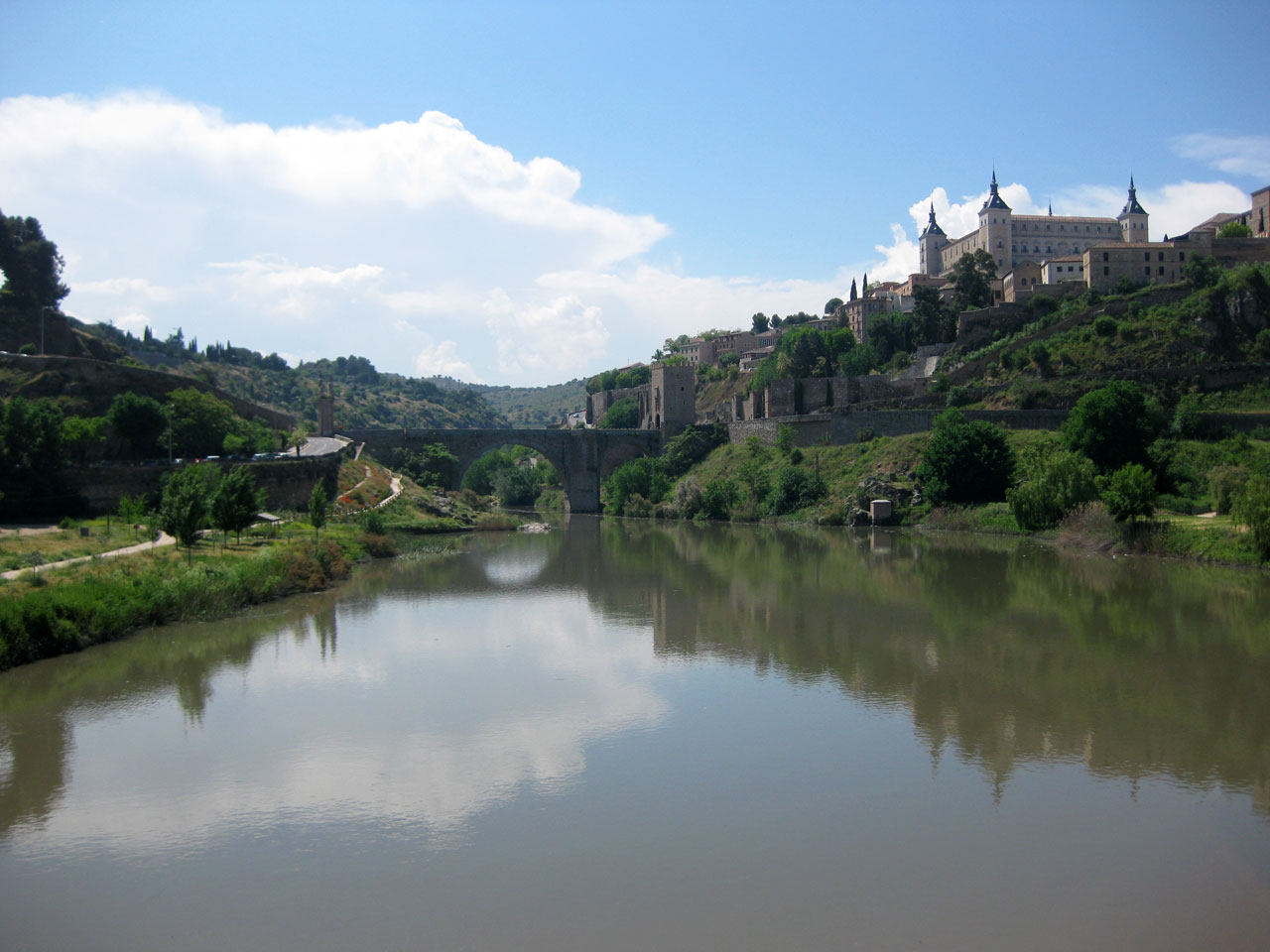 Situated about 50 miles south of Madrid, Toledo sits on a hill surrounded on three sides by a bend in the Tagus river. The stone bridges that cross the river and the huge, cube-like Alcázar fortress at the top of the hill lend the city a fairytale quality, and I could almost picture the knights of Old Castile battling with the Moors in the cobbled streets. Toledo is known as the ‘City of the Three Cultures’; during the Middle Ages, the city’s Christians, Jews and Muslims are said to have coexisted peacefully for many years, and this cultural heritage can be felt everywhere within the walls of the old city. I squeezed down shady alleys hemmed in by honey-golden walls that seemed almost to touch high above me, still intact from the days when Toledo was a Muslim city. The cross-pollination of architectural styles was bewildering, a muddle of mosques that were actually churches, synagogues that looked like mosques, and churches that looked like mosques that in fact used to be synagogues. 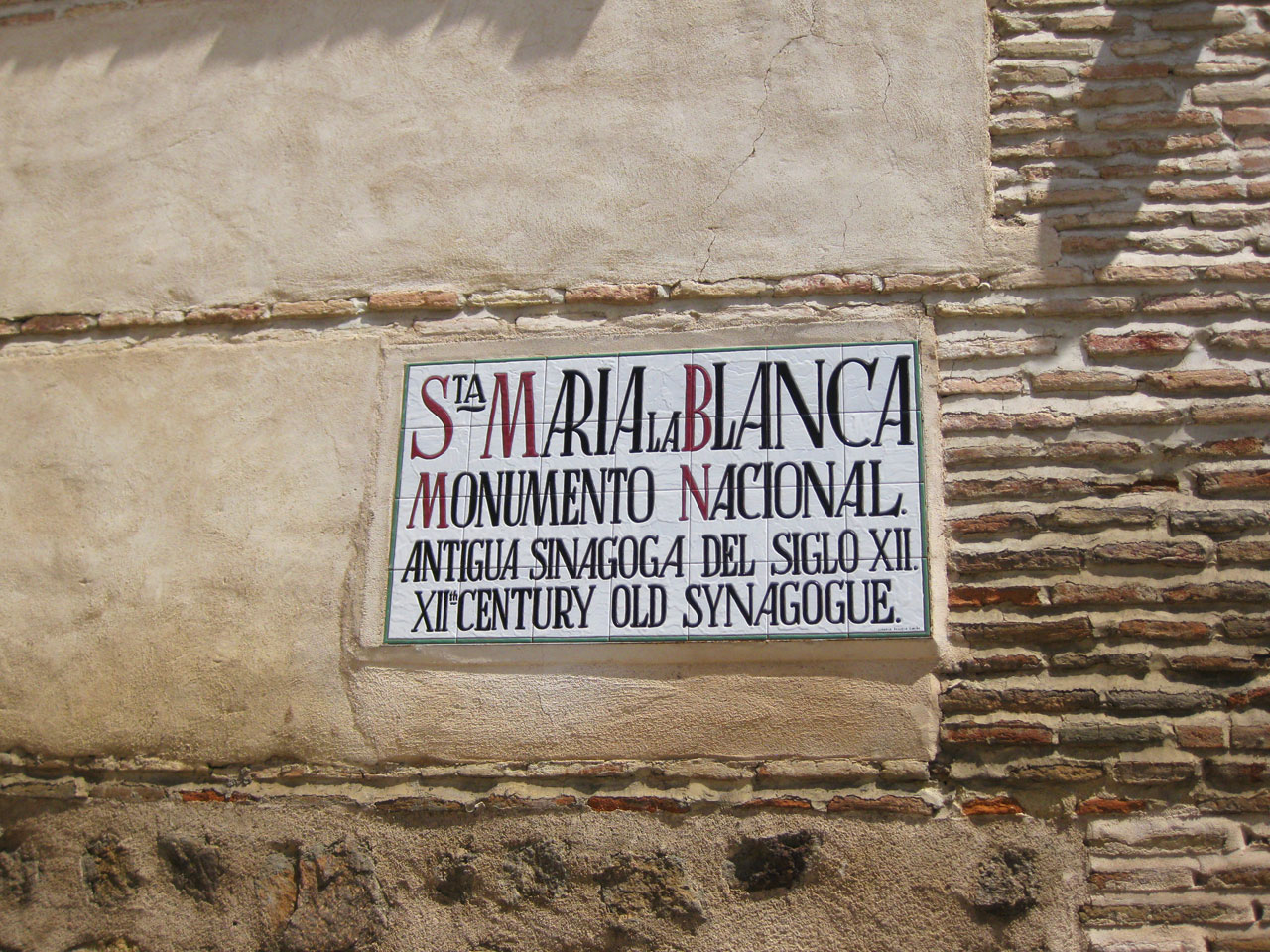 Toledo was the first major city captured from the Moors during the Reconquista, falling to the Christian kingdoms of the north in 1085, and in 1492 all practising Jews were ordered to leave Spain. This meant that the cultural diversity of the city was already greatly diminished by the time Toledo became the capital of Castile in the 16th century; it was not long before the Spanish court moved to Valladolid, and later to Madrid. Toledo fell into economic decline, while the new capital blossomed to the north. If you want to understand modern Spain, and the vast empire forged by the Habsburg and Bourbon kings, then you need to visit Madrid; but the heart of old Castile still beats in Toledo. 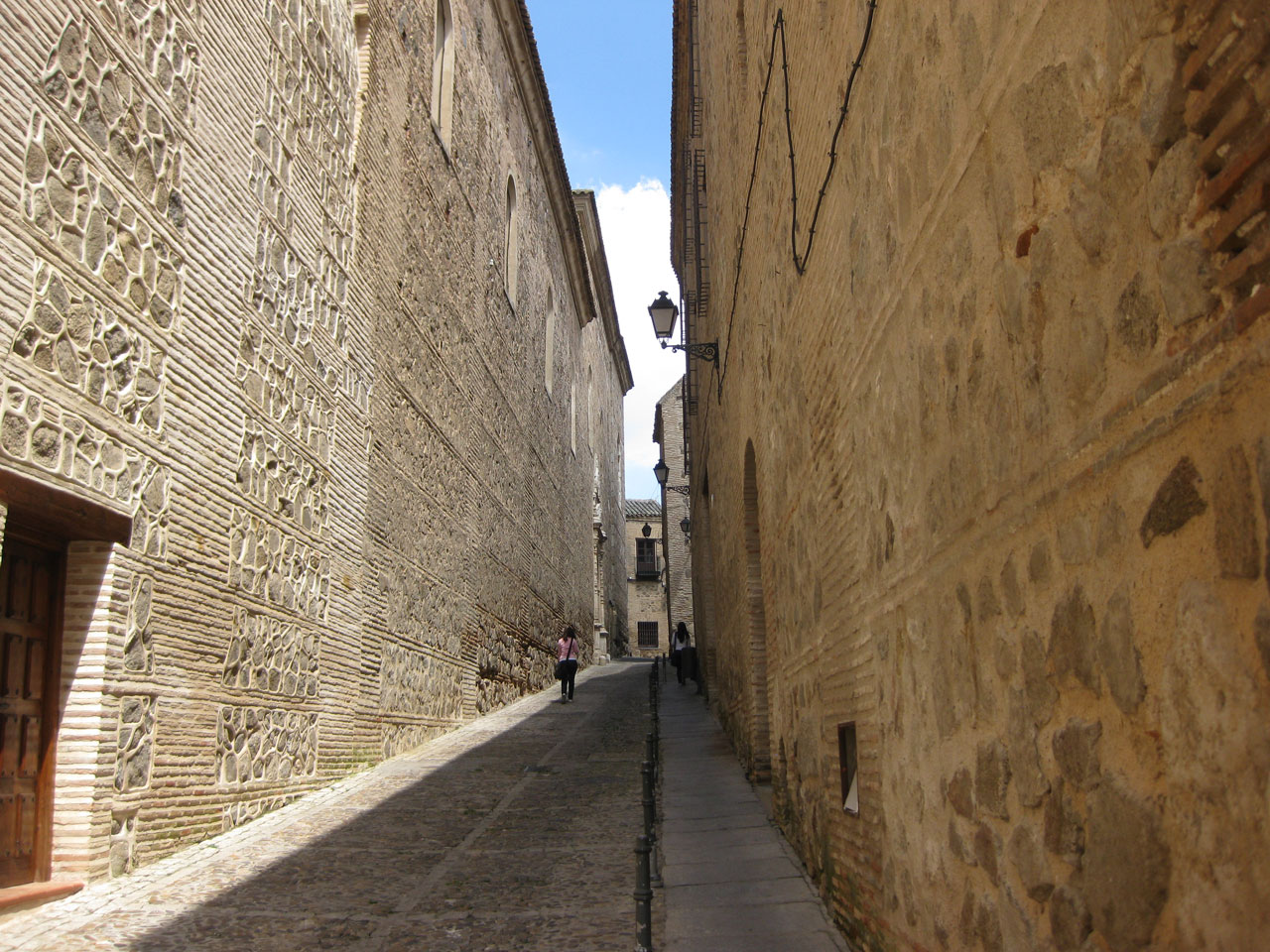 In March 1637, an episode in Dutch history that has come to be known as ‘tulip mania’ reached its feverish zenith. The price for the most coveted varieties of tulip had skyrocketed; the

Belgium is home to some 180 breweries, producing hundreds of different beers in myriad styles and strengths. A typical pub offers the adventurous drinker a choice of cloudy wheat beers with a hint

Not Here
—
Madrid & Toledo: The heart of Spain
Share this