The Karpaz Peninsula is long, longer than you think. Often described as the ‘panhandle’ of Cyprus, this thin strip of land protrudes from the eastern side of the island like a spindly finger, reaching out towards Turkey and Syria. Renowned for its unspoilt natural beauty, the finger beckoned to us with promises of sweeping, deserted beaches and off-the-beaten-track adventure.

So we set off from our base in the hills above Girne, three sunburnt lads in a Mazda Demio with an automatic gearbox, heading out on to the smooth highway that skirts the north coast of the island. This road is punctuated by under-developed coves where turtles come ashore to nest, though the only leather-skinned creatures we saw on the beaches were German pensioners, sun-ripened and Speedo-clad. We passed a power station sitting incongruously amid the Mediterranean idyll, belching smoke out of its fat chimneys at the end of a rocky promontory, and every now and again we would spot bored Turkish soldiers sat in little roadside huts, waiting for the invasion from the south that never comes. 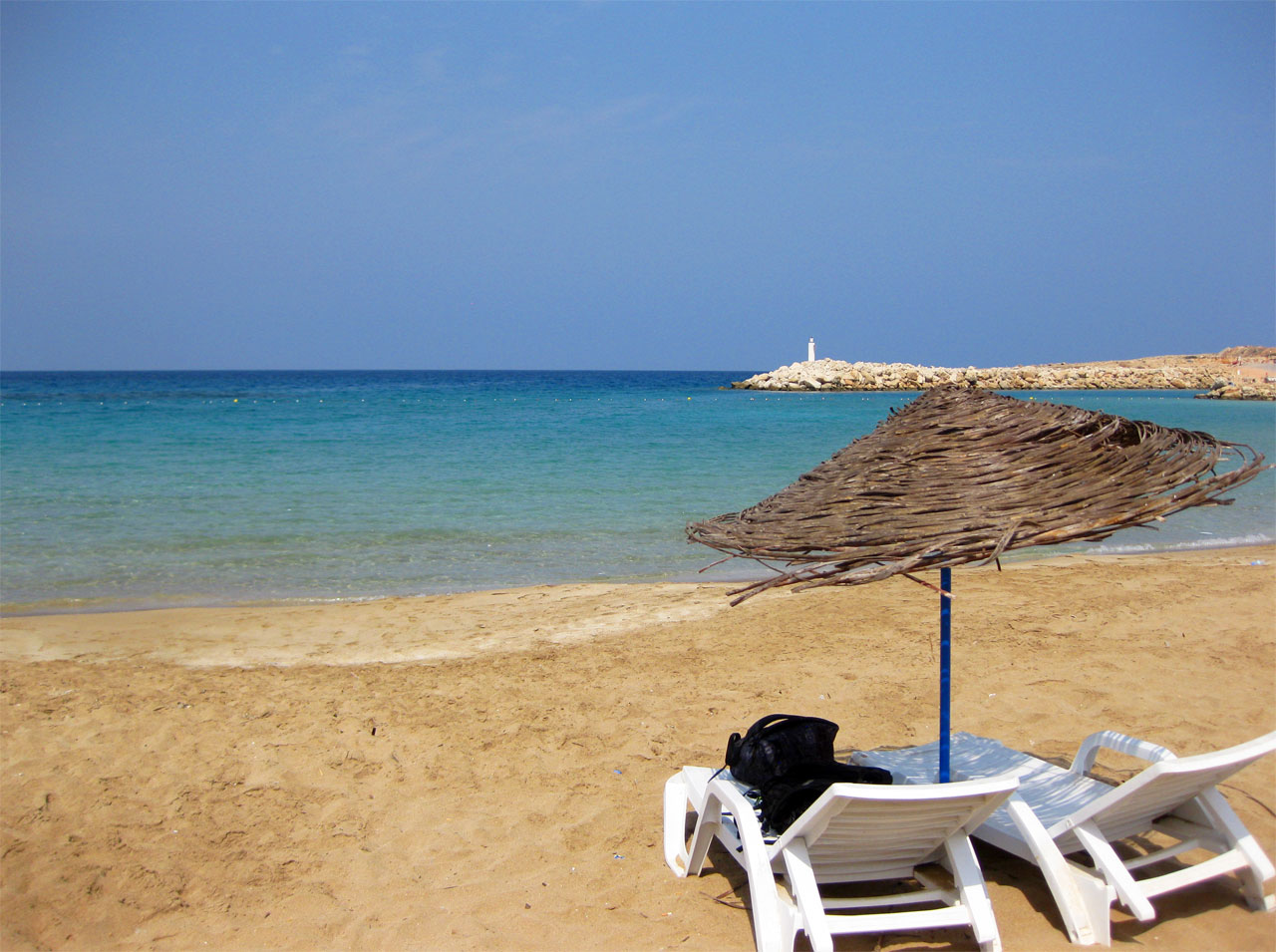 We pulled over at a beach somewhere to the east of Girne for a beer and a swim, before striking out into the Karpaz proper. As the peninsula slowly thinned, so the quality of the roads became more patchy, the terrain more mountainous. The road signs warned us to beware of falling boulders, precipitous drops and excessive speed. As we climbed towards the central spine of the peninsula, a widescreen view of the deep cobalt sea opened up on either side of us. Loose herds of cows ambled across the road in barren patches of open countryside, and we passed through the occasional slumbering village, clustered around a squat little mosque.

The road slowly descended again as we approached the southern edge of the peninsula, and we stopped for lunch at a small, sleepy-looking hotel with a large and empty outdoor restaurant. We were attended to by a Karpaz woman who spoke no English, and who simply jabbed her finger at the menu with a smile and recommended the fish. Soon a mouthwatering smokey aroma began to drift across the courtyard as our host prepared the food in a traditional stone oven. After the best part of an hour she returned with a sizzling earthenware dish containing the best fish that I’ve ever eaten, a succulent grouper smothered in tomatoes and herbs, served with home baked garlic bread. 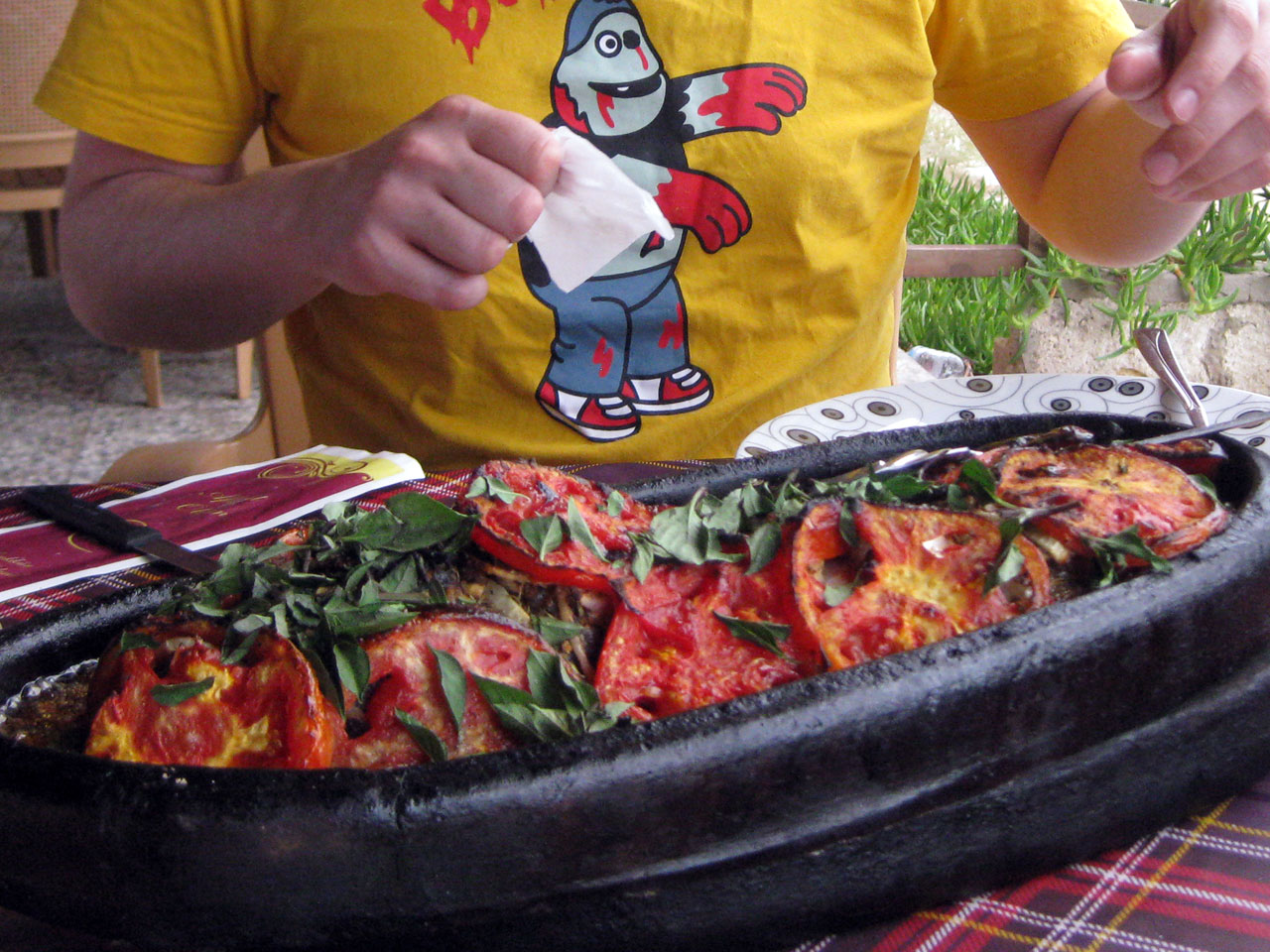 Swollen with lunch, we continued east. The land began to flatten out again on either side of the road, and the signs of civilisation became ever more thinly spread. Cruising along the empty country roads was exhilarating, in a way that I’ve seldom experienced while driving in the UK. We stopped at the side of a field for a photo opportunity with a herd of wild donkeys, who eyed us with suspicion from a distance. 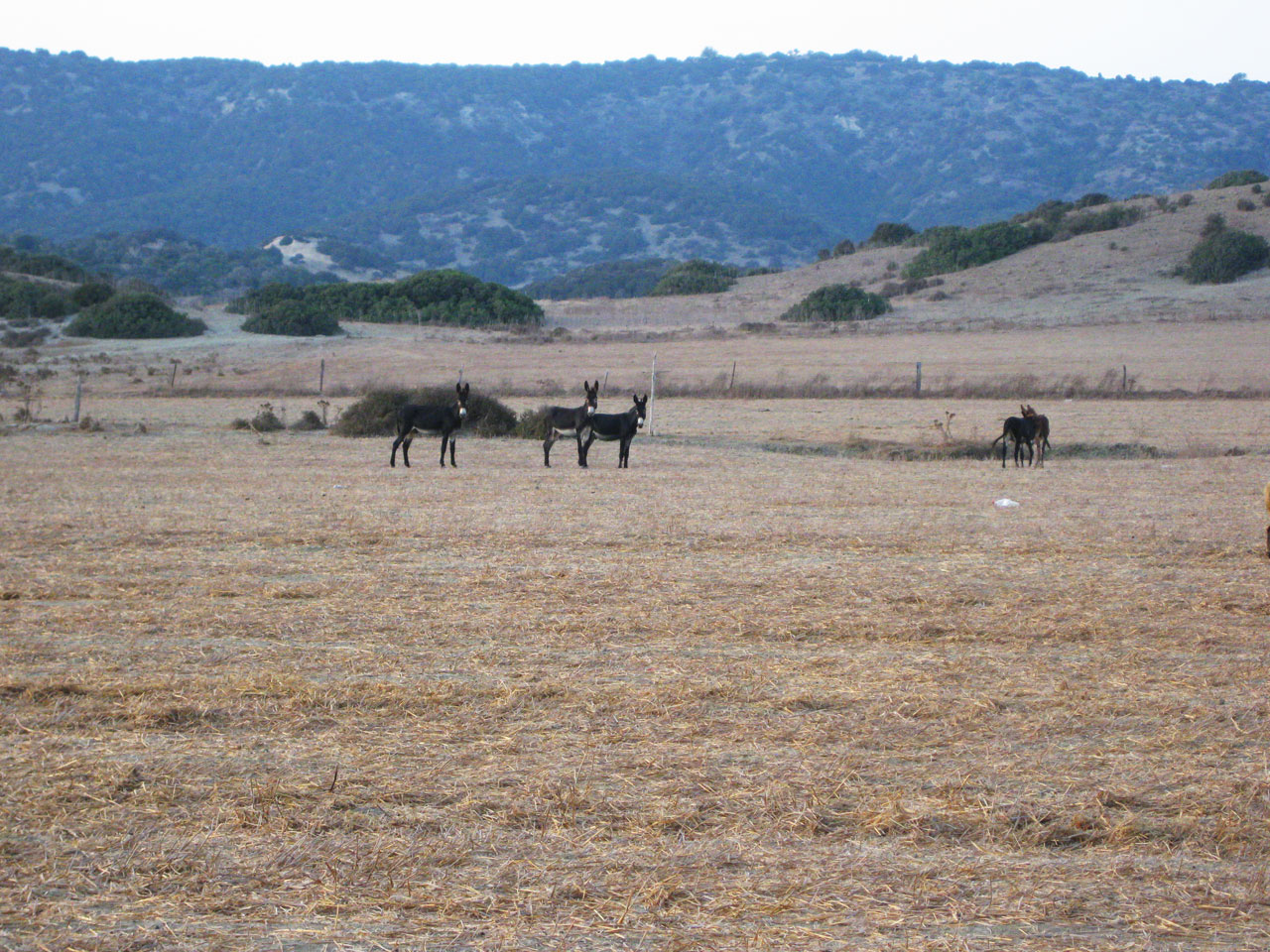 By this point we had lost all reception on the car radio, a respite from the melodramatic Turkish pop music that seemed to dominate the airwaves. It really did feel like we were at the distant edge of a country here, and we still hadn’t reached the tip of the peninsula. Indeed we were now debating whether it was worth carrying on all the way to the end, with darkness not far off and a long drive back to Girne still to come. Then suddenly we were there, climbing up another steep road past one of those majestic golden beaches that we had come in search of. The road petered out to gravel as we reached the isolated Apostolos Andreas monastery, which sits on a clifftop facing out towards the Middle East.

We decided to turn the Demio round and head back to the beach we had just passed, the aptly named Golden Beach. The dunes seemed to stretch all the way to the western horizon, bathed in a fragile orange glow as the sun began to set. This disintegrating daylight allowed us half an hour to enjoy what we had come all this way to see, before we trudged wearily back to the car. We had a long return journey ahead of us. 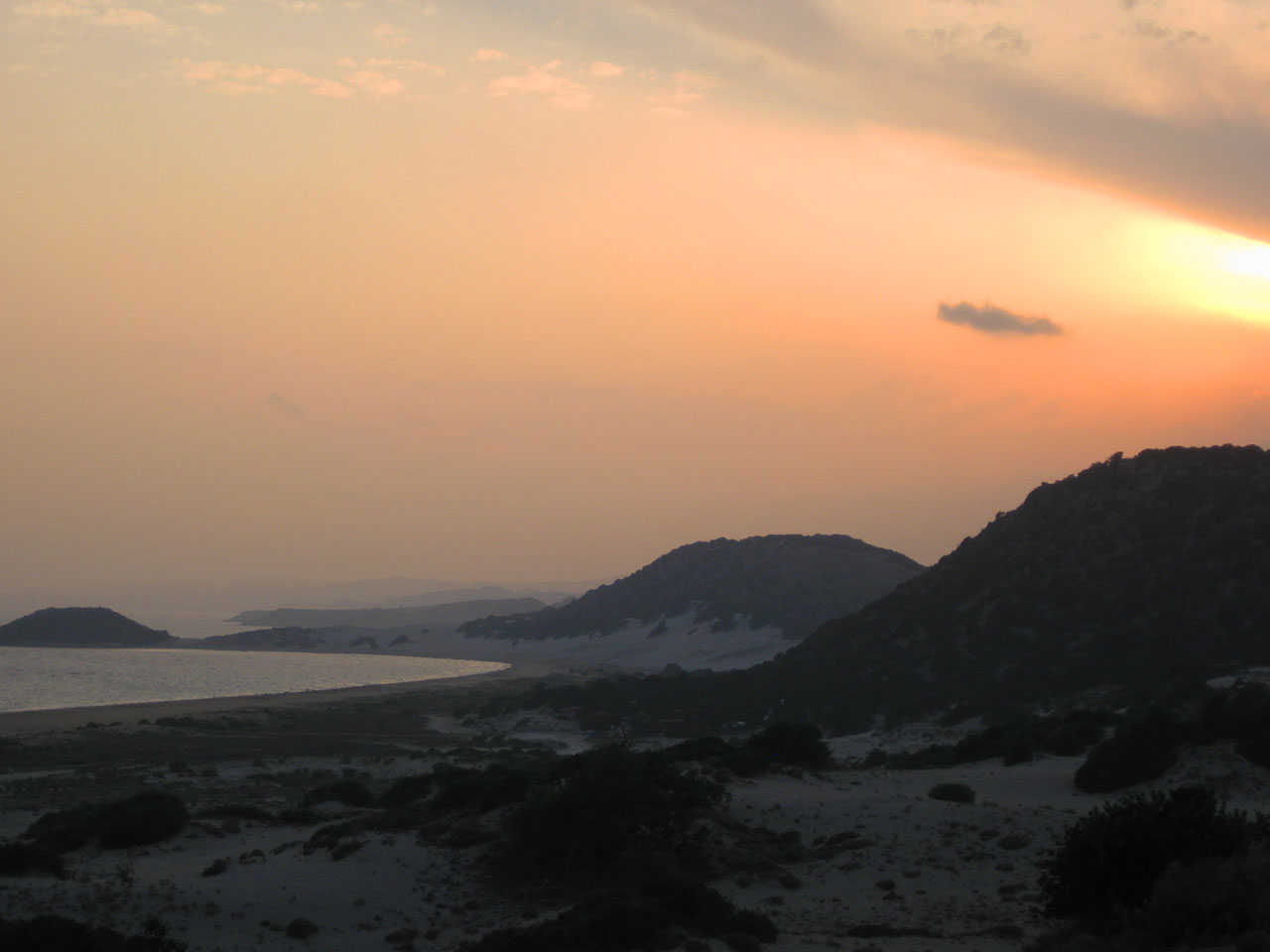 Last year, when I mentioned that I was going to Uzbekistan for my summer holiday, a few people quizzed me on the ethical implications of travelling to a country governed by such a

It was a miserable grey smear of a December day in ‘Gib’. After several days travelling the coast of Spain in splendid sunshine, we arrived in this little British enclave to find British