Stuffed into a battered old cardboard box at my parents’ house, where I’ve been staying over Christmas, is a veritable treasure trove of childhood holiday memories. Hundreds of photos document the tortured evolution of my haircut and fashion sense against a backdrop of Spanish beaches, Swiss mountains and French campsites. Not a single photo exists, however, of my earliest travel memory, which dates back to a holiday in Portugal when I was four years old. A day or two after we’d arrived, the hotel maid was in our room cleaning, and I showed her a drawing I’d done of one of the Ghostbusters, a minor felt tip masterpiece that had taken quite a long time to produce. Perhaps unaware of how important the Ghostbusters were to me at that point in my life, she then proceeded to ruin it by grabbing one of my pens and adding the crude outline of a donkey.

“Burro”, she explained, smiling, apparently oblivious to the act of cultural vandalism she’d just committed. It was quite possibly the first piece of non-English vocabulary I ever learnt.

A few other words of Portuguese have stuck with me since that holiday: frango (chicken), escudo (the pre-Euro currency), supermercado (I’ll let you work that one out yourself). I don’t remember much about what the country was actually like though, and the photos I unearthed earlier this week didn’t do much to jog my memory. The sweeping golden beaches could just as easily have come from the pages of a faded ’80s holiday brochure as from my own childhood. 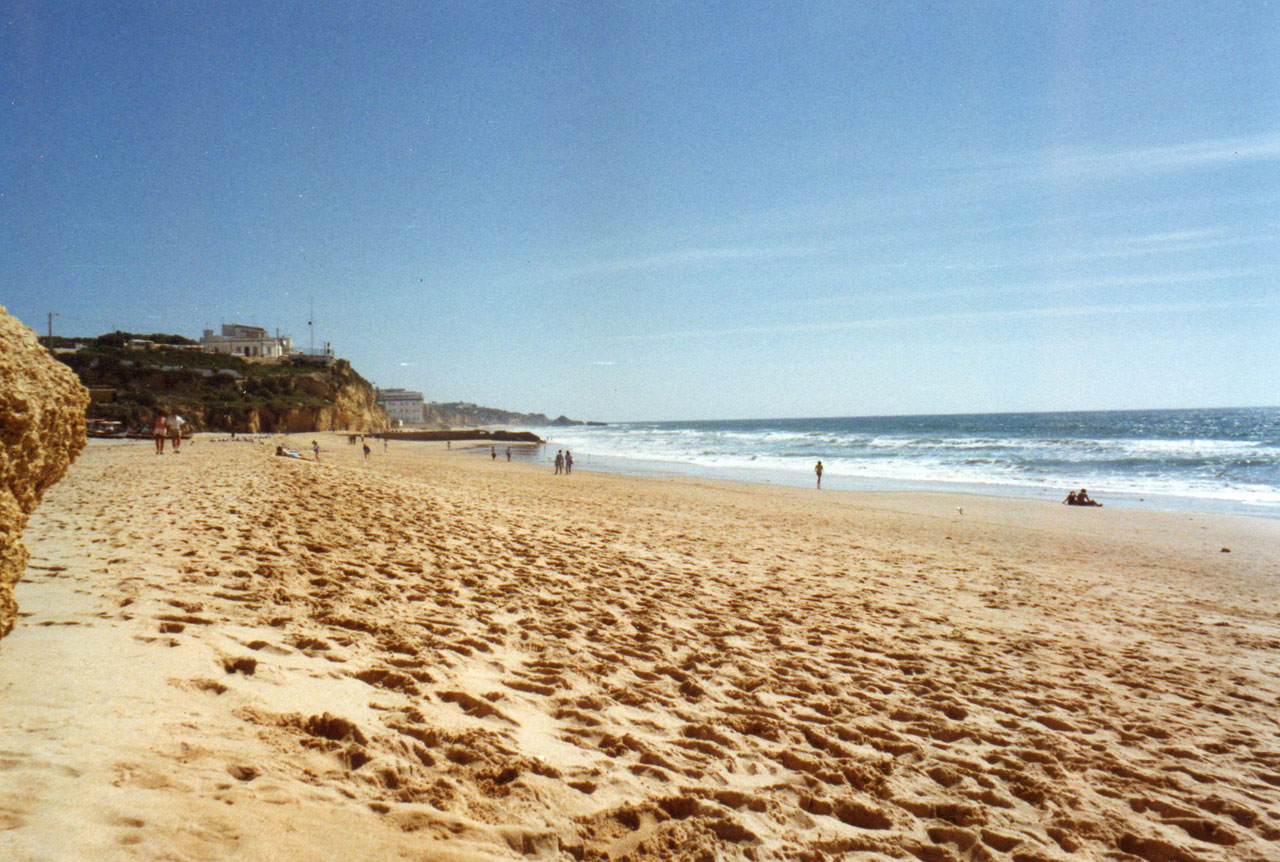 Other pictures capture quintessentially Portuguese scenes of which I have no recollection at all. Crowds throng around fishermen bringing in their daily catch in photos imbued with a hint of the exotic, of a Europe that is somehow more authentic, more rustic. Though of course tourism was hardly new to the Algarve in 1989; other pictures from the same collection are blighted by towering cranes looming in the background, timeshare apartments sprouting up like an ugly fungus. 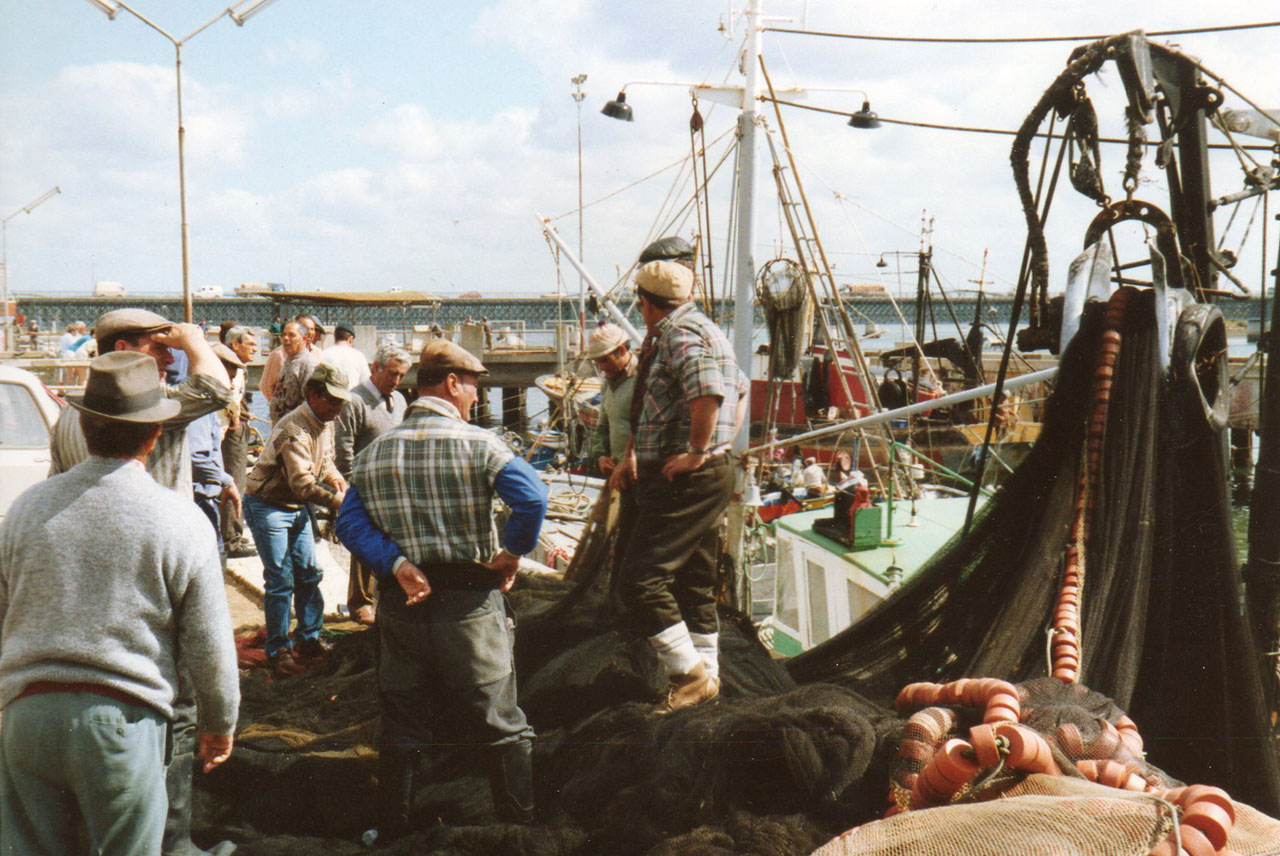 A photo can also serve as a snapshot of a particular moment in history. We went to Croatia (then still part of Yugoslavia) in 1991, just a couple of months before the country was torn apart by war. At six years old I was, of course, entirely unaware of the rapidly deteriorating political situation. What I do remember is running around the hotel grounds trying to catch lizards, the flabby old Germans walking around naked on the nudist beach, and my little brother throwing up all over my shellsuit during a coach journey to Postojna Cave, in what is now Slovenia. The photo below, of the entrance to the cave, is not a particularly great shot, but I find myself wondering what the two women in the foreground were talking about. The political troubles that were about to bubble over, perhaps, or just what they were planning to eat for dinner? They could even have been tourists themselves. 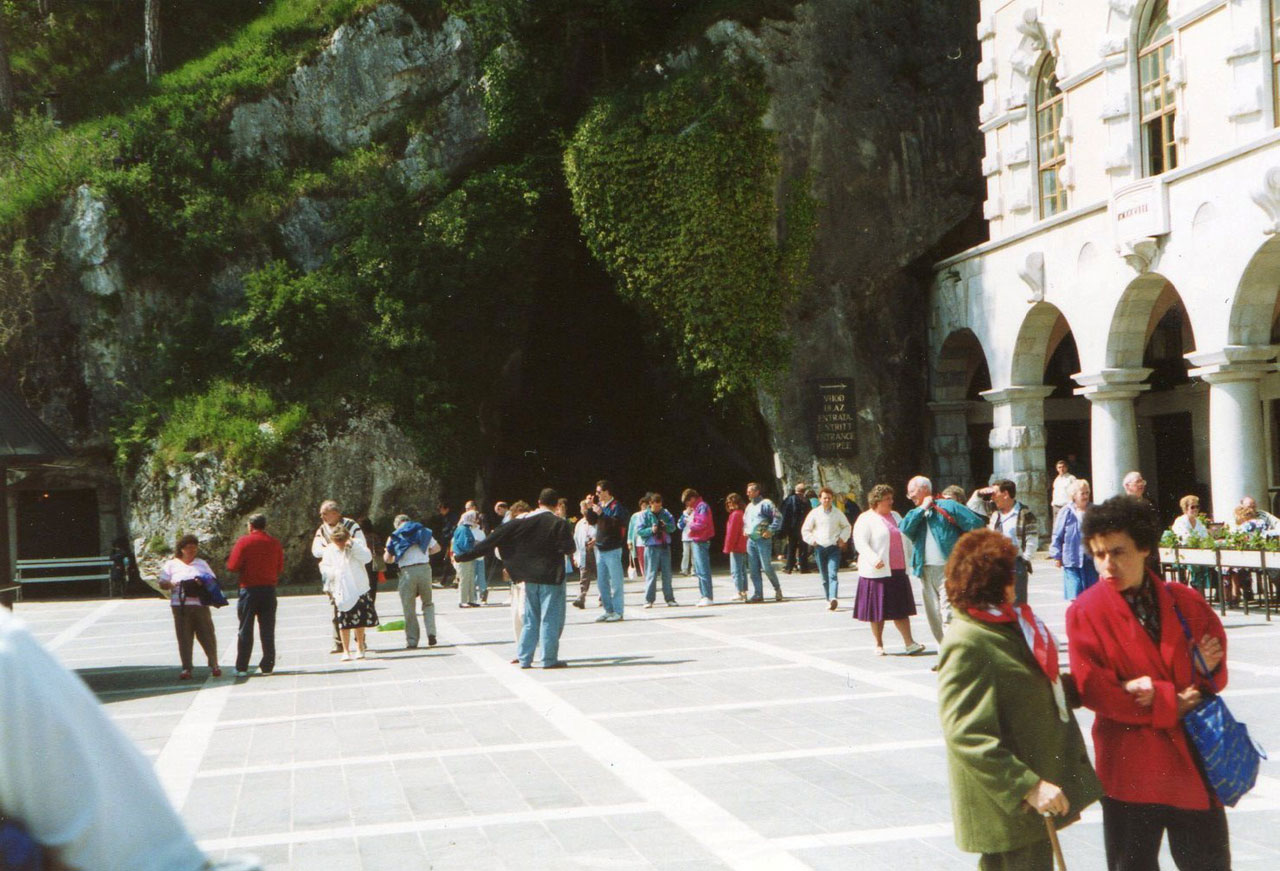 During the same holiday, we took a day trip across the Adriatic to Venice, where I remember feeding the pigeons in Piazza San Marco and riding in a gondola along mucky canals; I especially remember the ripe stench of the water. When I returned to the city last year, there was very little that felt familiar; it seemed smaller, cleaner, more colourful. Looking now at our photos from 1991, perhaps some of my perceptions were accurate: the Venice of the 1990s looks a decidedly grimey place in comparison to today’s city. 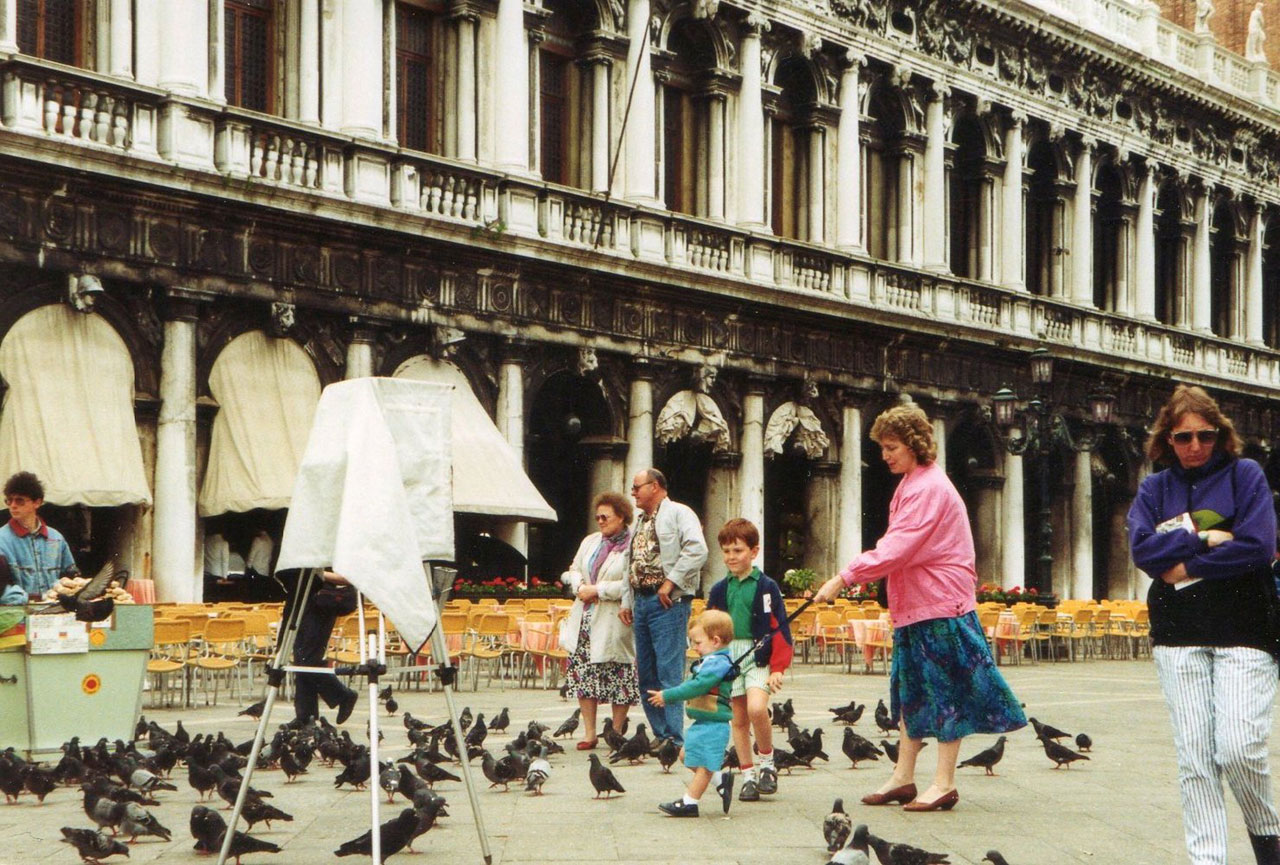 Over the last decade or so, I think it’s fair to say that digital photography has fundamentally changed the way we think about holiday photos. Mine is the last generation that will remember what a Quality Control sticker was, and indeed the majority of holiday photos these days will never even exist in physical form. The boxes stuffed under the bed and lost in the depths of my parents’ garage represent a discrete period in time, an era of terrible clothes and badly taken photos which ends abruptly in the early 2000s. 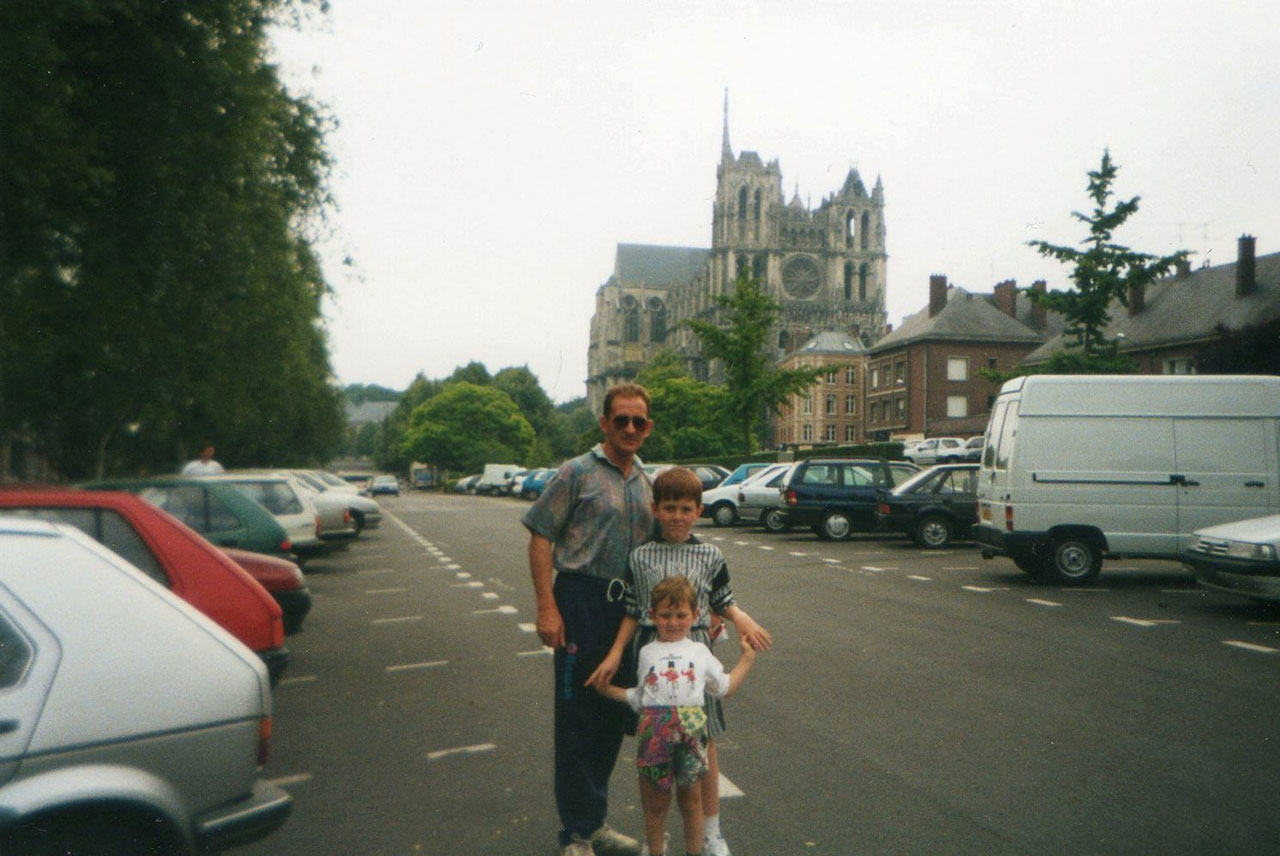 Social media has also had a big impact on how we think about our holiday photos. Although the reasons why we take photos on holiday remain fundamentally unchanged – to record moments in time, both for ourselves and for others – the potential audience has now grown way beyond our immediate circle of family and friends, up to and including anyone in the world with an internet connection. At the same time, we tend to be more selective on social media, to ‘curate’ a more polished presentation of each holiday, designed to maximise our friends’ jealousy. All of this, I think, makes great photos taken in the pre-Instagram era seem all the more special. I found some real gems amongst the blurry Eiffel Towers and overcast days at the beach, such as this shot of two old Dutch men walking through a campsite in Germany sporting clogs. 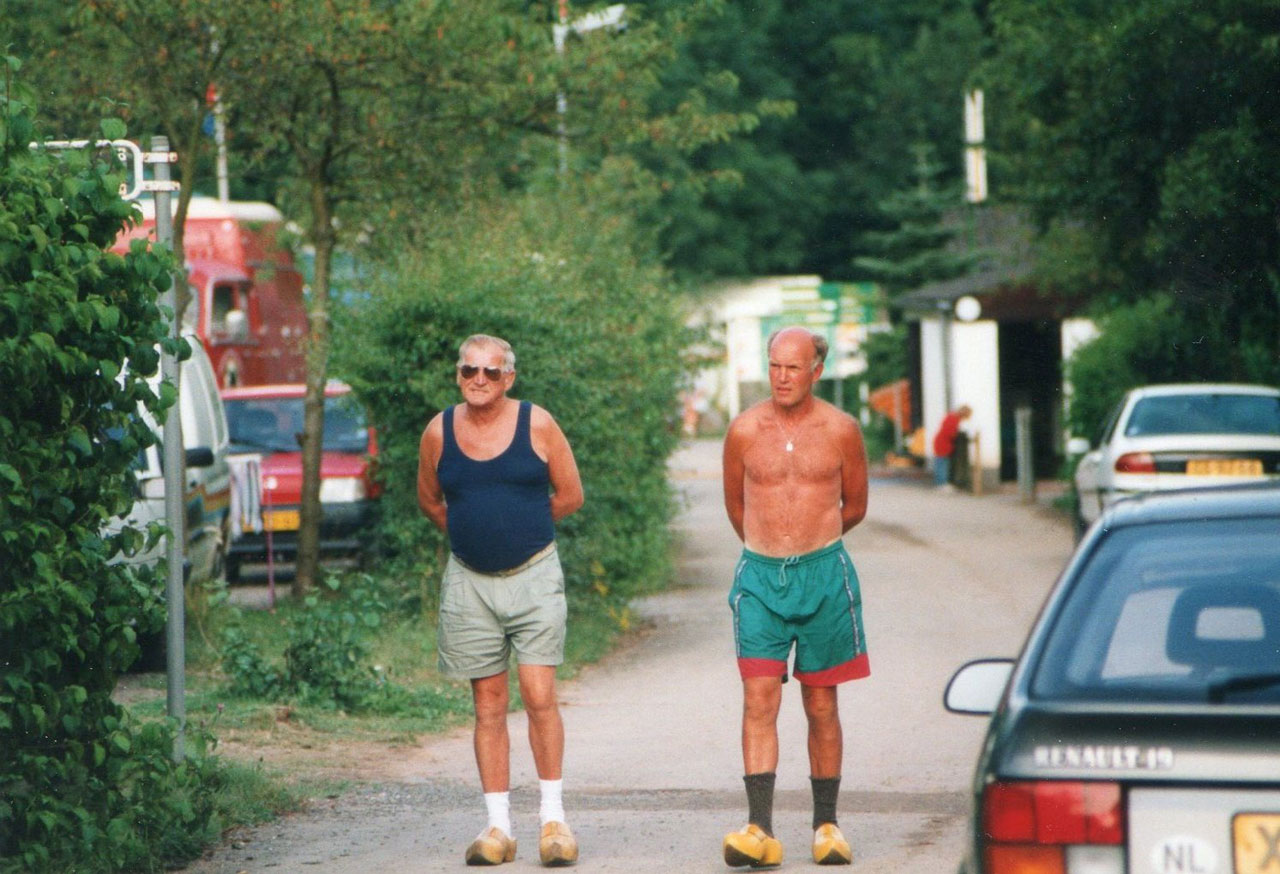 One of the most evocative photos that I found, however, was a fairly unremarkable picture taken from our hotel balcony in Rhodes in 1998, of the view across to Turkey as the sun is setting. I remember being fascinated at the time by the fact that I could see a little bit of Asia, another continent, sitting there just across the sea, hazy on the horizon. I took several photos trying to capture that view, and I even remember attempting to draw it. It would be another 14 years before I eventually set foot on the continent for the first time, thousands of miles to the east in Malaysia, but I like to think that there is a thread running all the way back to that first glimpse of the Orient, from a hotel balcony on the fringes of Europe. 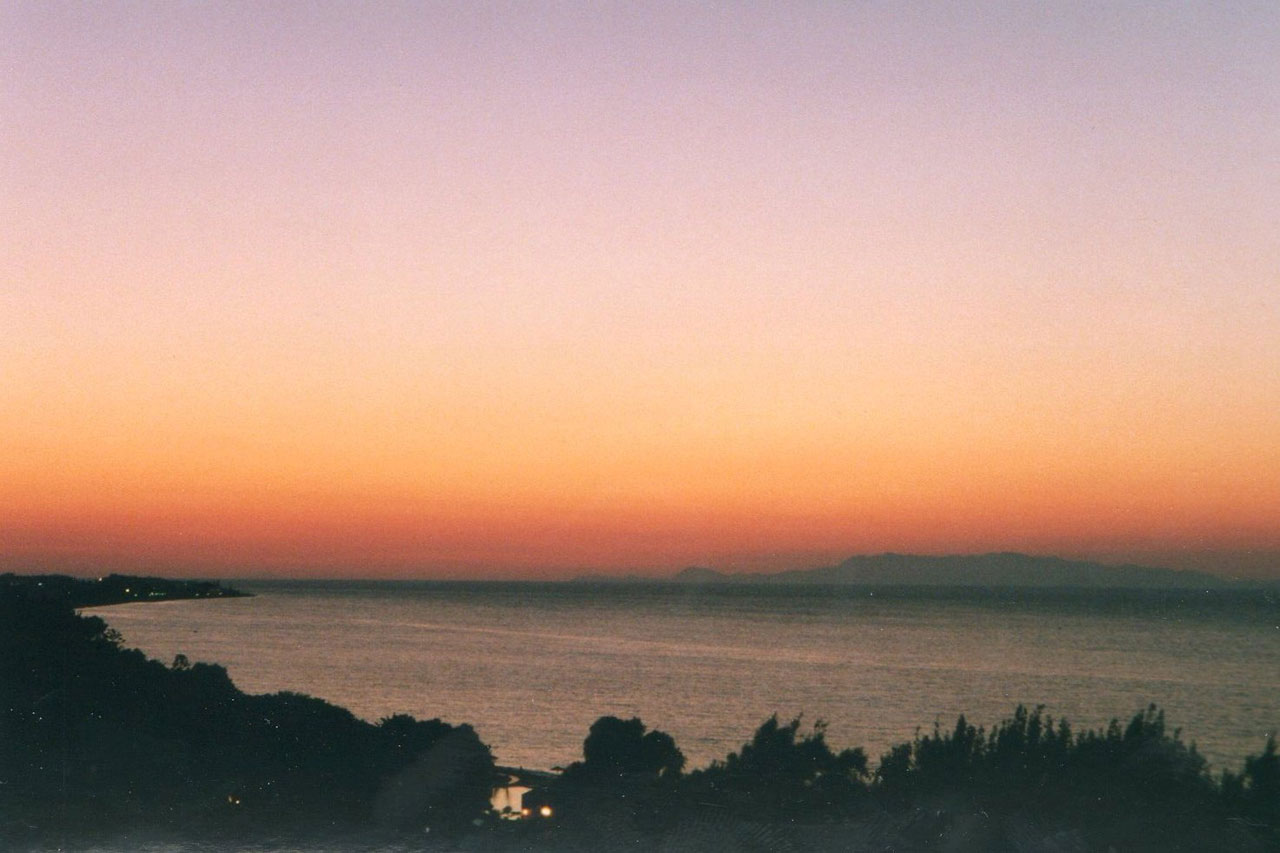 The Shard is, depending on who you ask, a visionary addition to the skyline of a dynamic 21st century metropolis, or a vulgar display of Qatari oil wealth that’s out of kilter

The traffic honked and screeched and beeped and buzzed, a seething mass of organised anarchy. A constant stream of motorbikes, carrying up to four people at a time, wove in and out of