Havana is often described as a city stuck in a timewarp, and perhaps that was true once.

For me, however, the label didn’t quite fit; the Cuban capital was more like one of those composite photos, two identical shots of the same street taken 50 years apart and overlaid. A horse and cart rumbles along the cobbles while reggaeton blares from a window up above; people queue outside the government ration shop to collect their tray of eggs, while round the corner teenagers sit bathed in the glow of smartphone screens in a newly installed WiFi hotspot. The assorted ephemera of modernity intruding into each street scene quickly dispel quaint and patronising notions of ‘old world charm’, and remind you that this is a country where many are straining at the leash to catch up with the world. 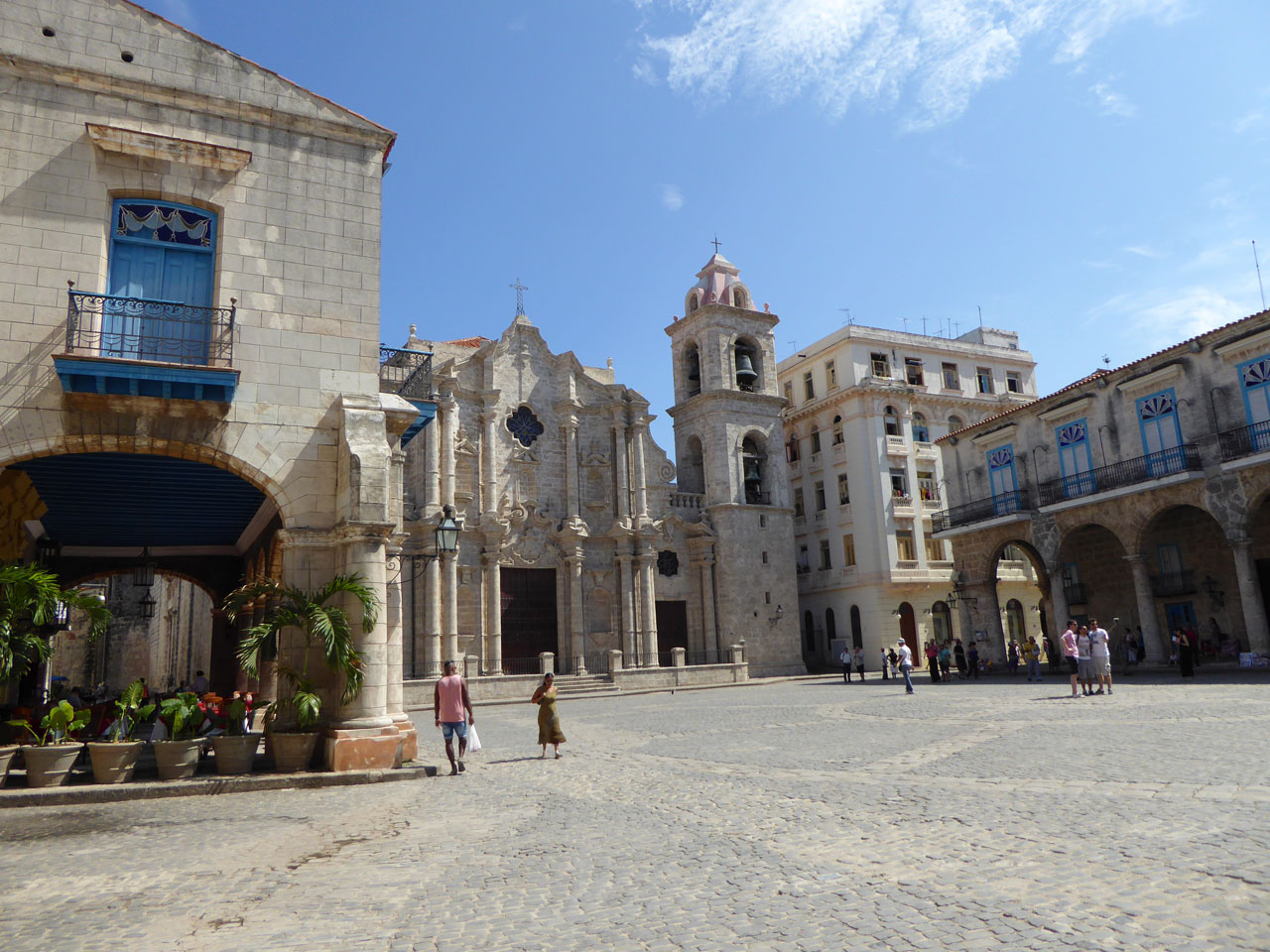 We arrived at a significant moment in the nation’s modern history, hot on the heels of Barack Obama. It’s impossible to write about Cuba right now without talking about the thawing of relations with the USA, and it was a topic on everyone’s lips in Havana. In spite of years of crippling sanctions, and the murals decrying the blockade as ‘the longest genocide in history’, there seemed to be a palpable lack of animosity towards Americans and American culture. Everywhere we came across taxis with American flags fluttering, or Apple stickers slapped on their windows; virtually the first thing we saw on arrival at the airport was a huge advert for Lucky Strike cigarettes. We even saw the odd gaggle of American tourists, trying not to look too conspicuous. 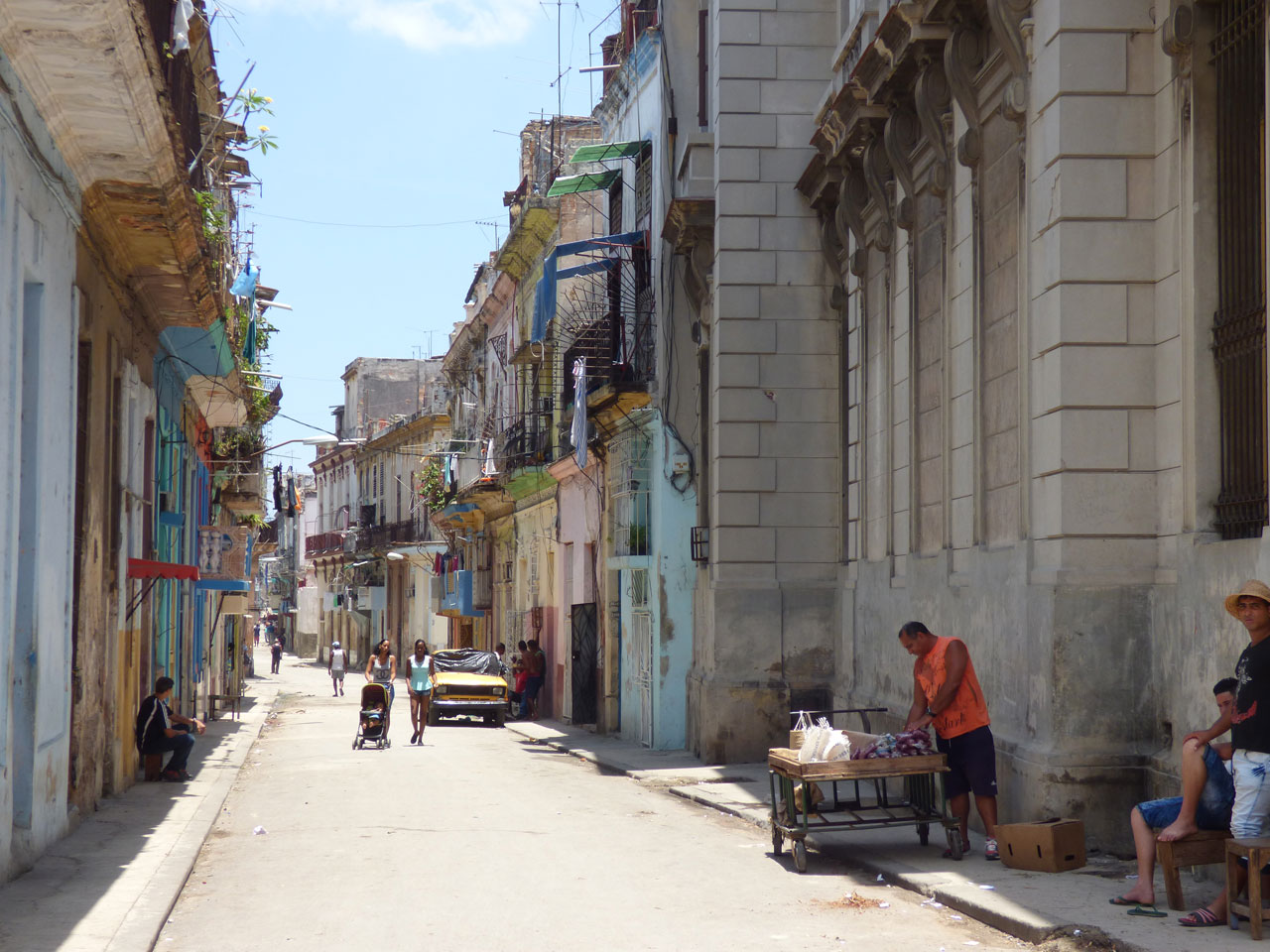 The tourist centre of the city is Habana Vieja, the beautifully restored colonial old town. In some places the colourful buildings are in pristine condition, the cobbled streets gleaming, and we could just as easily have been in mainland Spain or the Canary Islands. But there is still plenty of decay and decrepitude in Havana; this is particularly acute in Centro, the sprawling residential district that marches west from the old town. In places it looks like a war zone, with apartment blocks in various states of collapse. It might look picturesque to tourist cameras, but life is precarious for the people who have to live in such structurally unsound homes. It’s perhaps no wonder that life often seems to take place out in the street; we ambled past cycle taxi drivers fixing their ramshackle rides, kids playing football, women sat on their front porch looking weathered and weary. The odours of hot drains, cigar smoke and horseshit wafted across sun-scorched pavements, the midday stillness disturbed by the growling engines of 60-year-old cars or the blare of a TV behind a shuttered window. 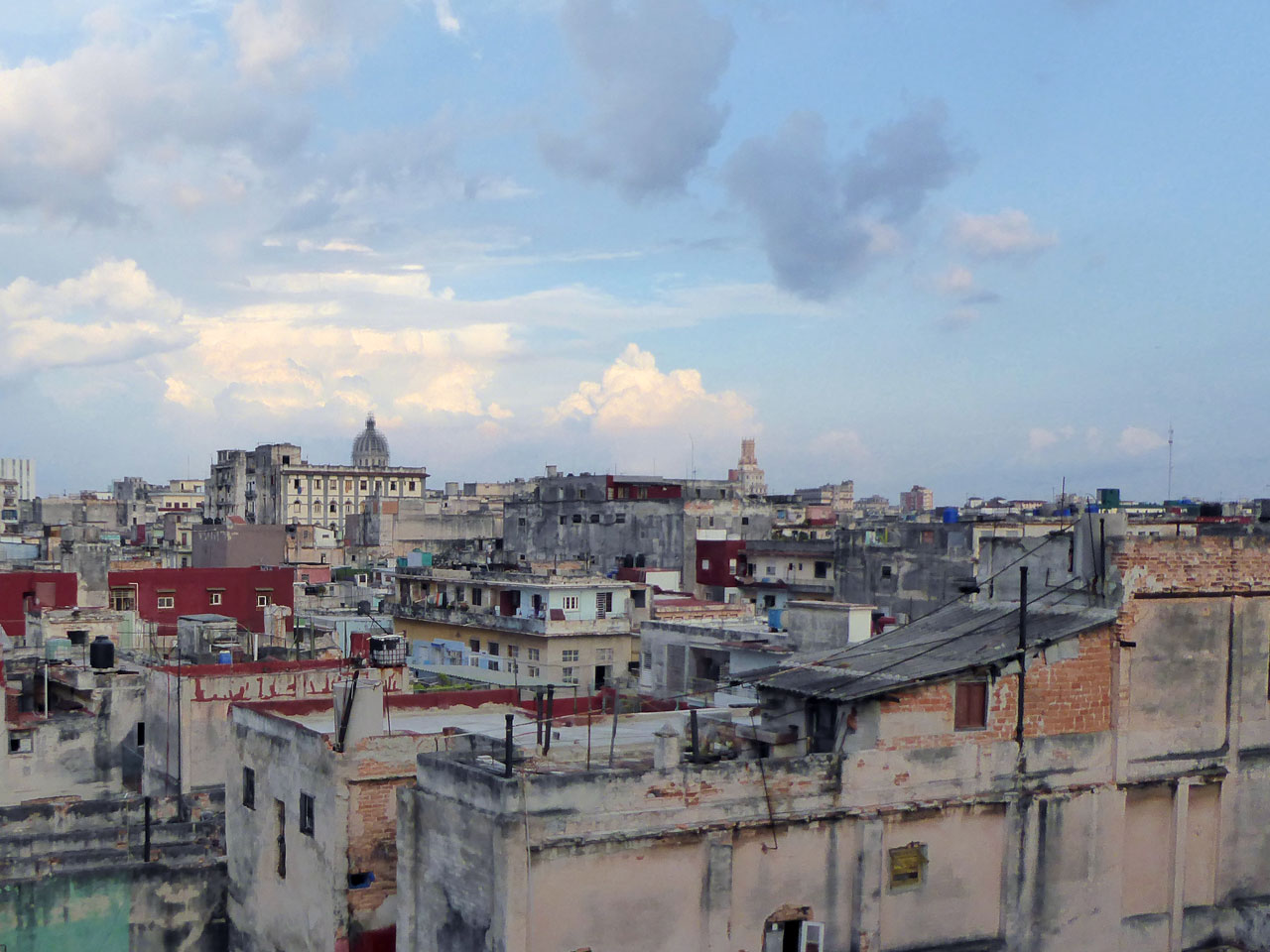 We returned to Centro on our second evening to have dinner at one of Havana’s most famous restaurants, La Guarida. Eating out in Cuba is not a straightforward affair, and a little bit of pre-planning is recommended; an often bland national cuisine is exacerbated by shortages, rationing and the largely poor quality of government-run restaurants. But there are plenty of places serving excellent food if you’re prepared to be a little picky, a situation that has improved dramatically since Raúl Castro relaxed the laws on private enterprise in 2010. I don’t normally write about restaurants on my blog, but our evening at La Guarida was particularly memorable; not just because of the atmospheric setting, on the top floor of a half-derelict apartment building, nor the excellent food, but because this is the place where I proposed to Polly, and where she said yes! The evening was a bit of a blur after that – blame emotions running high, or perhaps the mojitos – but there’s no doubt that Havana will always be a special place to us. 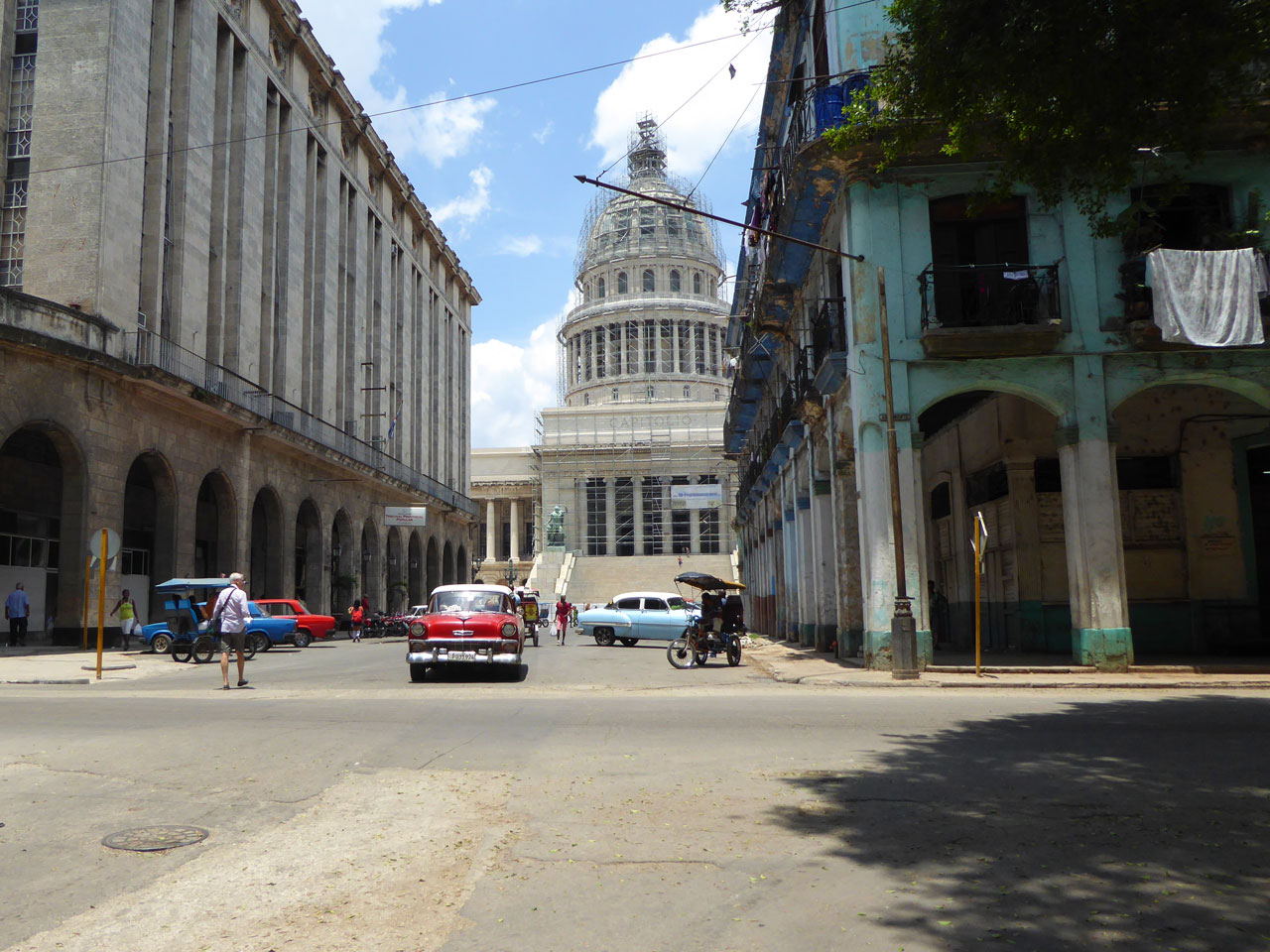 It’s a pretty special place already, and the all-pervading sense of history is a big part of that. We took a trip back to the 1950s at the Revolution Museum, a typically communist affair with its surfeit of minute detail and meaningless statistics, the display cases filled with everything from blow-by-blow maps of military campaigns to the bloodied trousers of felled revolutionaries. The way the story was presented was perhaps more interesting than the artefacts themselves, with frequent references to the ‘imperialists’ and a highly uncritical portrayal of Fidel Castro and his 50-year reign. The man who Castro replaced, the US-backed dictator Fulgencio Batista, was the last incumbent of the museum in its previous incarnation as the presidential palace, and one of the more interesting rooms was his old office, complete with gold-plated telephone left in situ to illustrate the extravagant excesses of the man. 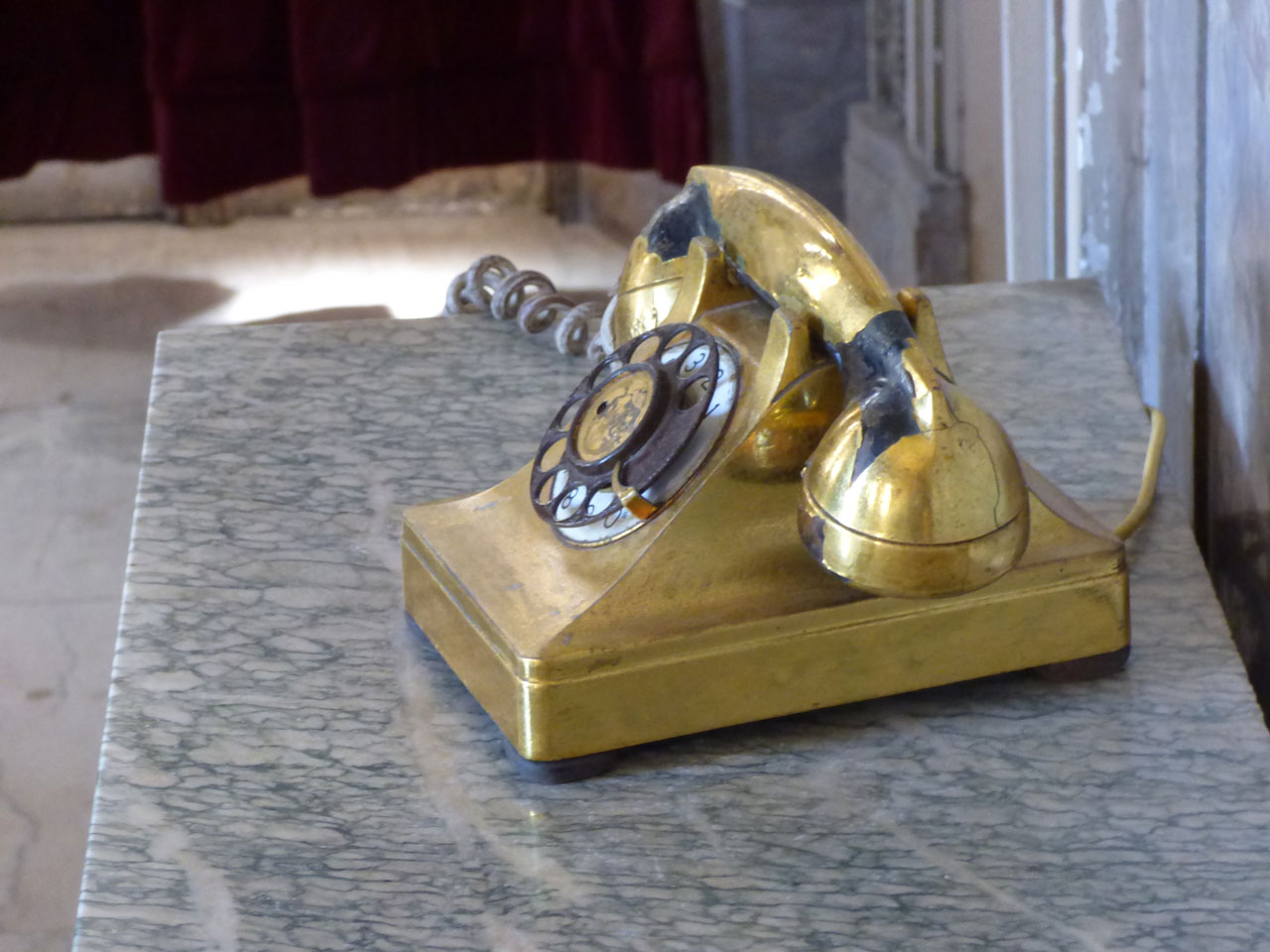 Outside the museum, attitudes towards the US were more nuanced. At the Taller Experimental de Gráfica, an artists’ workshop and gallery near the cathedral, Barack Obama featured frequently in the work on display; sometimes in scenes that projected optimism about the future of the US-Cuban relationship, other times laced with more scepticism. Several people grinned as they told us that the Capitolio, though similar in appearance to the Capitol building in Washington, is actually 12 feet taller than its American counterpart. The building is spectacular in spite of the renovations currently taking place, and together with the old cars driving past invited a certain cognitive dissonance; here we were in the capital of a country that was supposed to be the mortal enemy of the USA, and yet all around us where echoes of Uncle Sam. 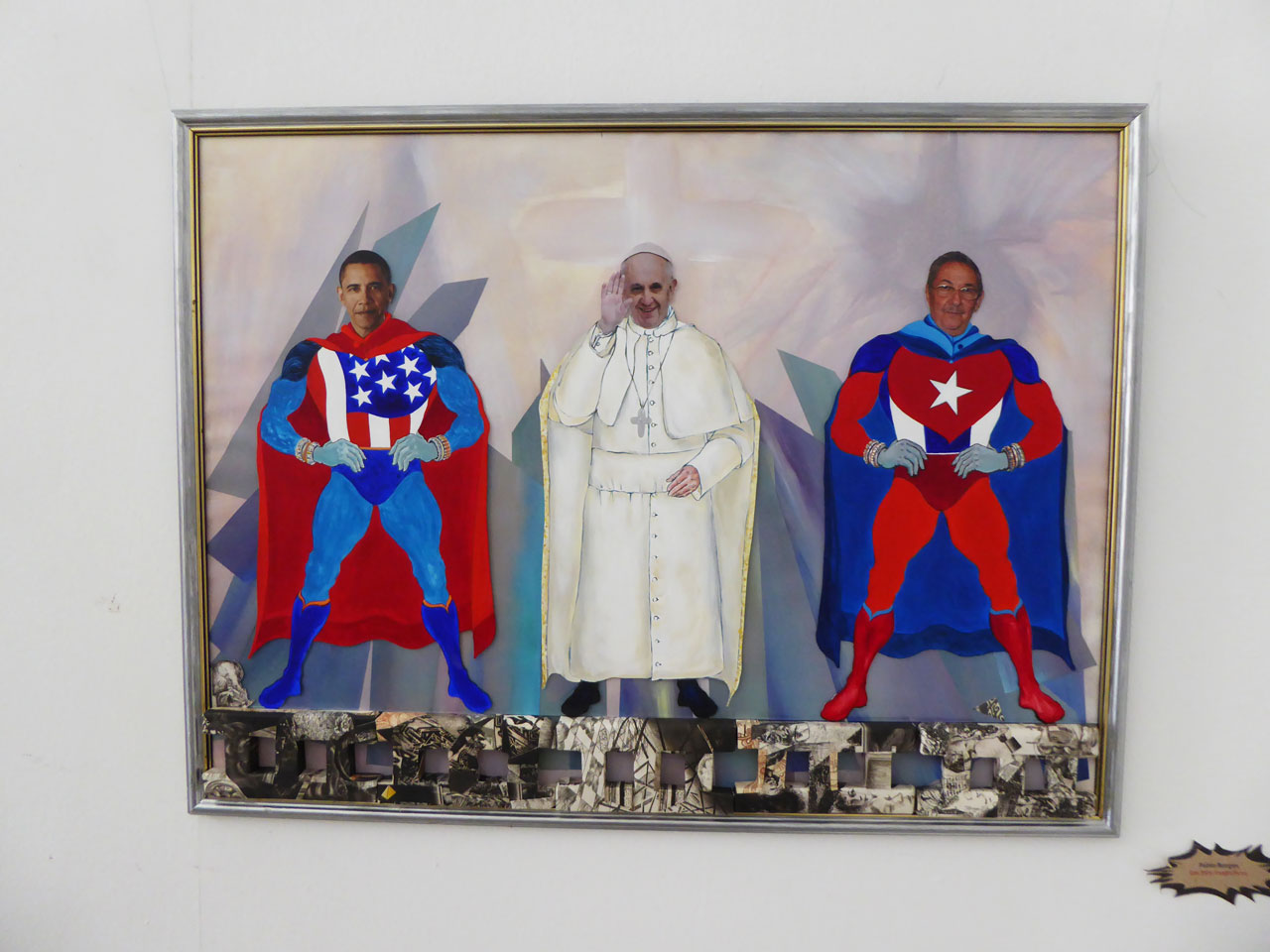 Riding in one of the aforementioned classic cars may be a Havana tourist cliché, but it has to be done. Just opposite the Capitolio, on the broad main thoroughfare known as the Prado, is the best place to choose your ride, where a rainbow of immaculately waxed motors compete for your custom; cherry reds and hot pinks, lime greens and ocean blues. We chose a red Dodge convertible, driven by a friendly chap who looked the part in his cowboy hat and aviators. 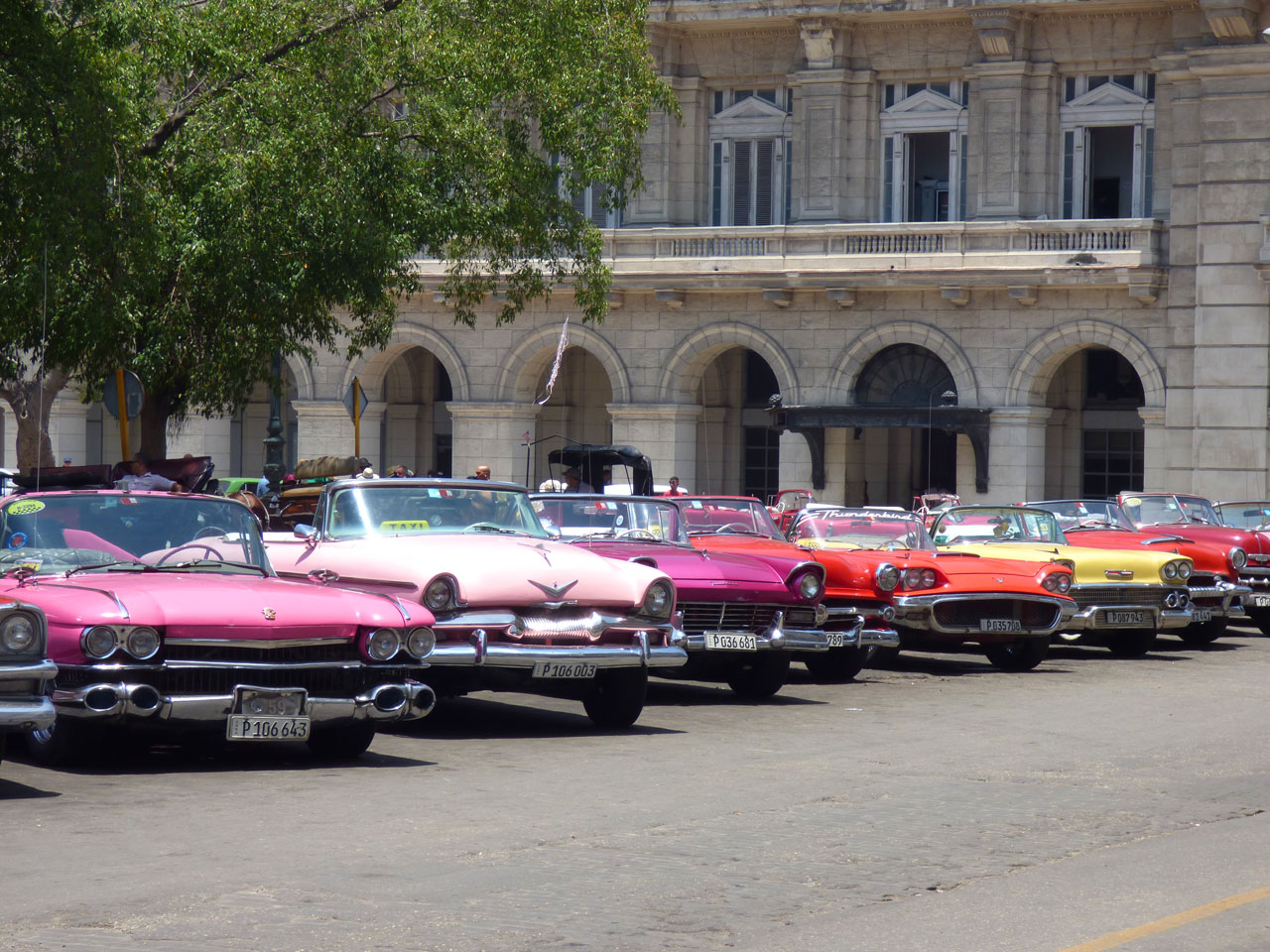 We rode in several old cars over the course of our stay in Cuba, of varying roadworthiness; it’s fairly common for the doors to be un-openable from the inside, meaning that you have to reach out of the window to let yourself out. We even got in one taxi where starting the engine involved touching two wires together. Our ride in Havana was in relatively good nick, however, and we growled our way through Centro to Revolution Square, a featureless expanse of concrete where the famous murals of Che Guevara and Camilo Cienfuegos adorn the side of two ugly apartment buildings. Other than the standard photo opportunity in front of Che, the square isn’t terribly interesting; its vast dimensions are ideally suited to military parades and rallies, but not much else. 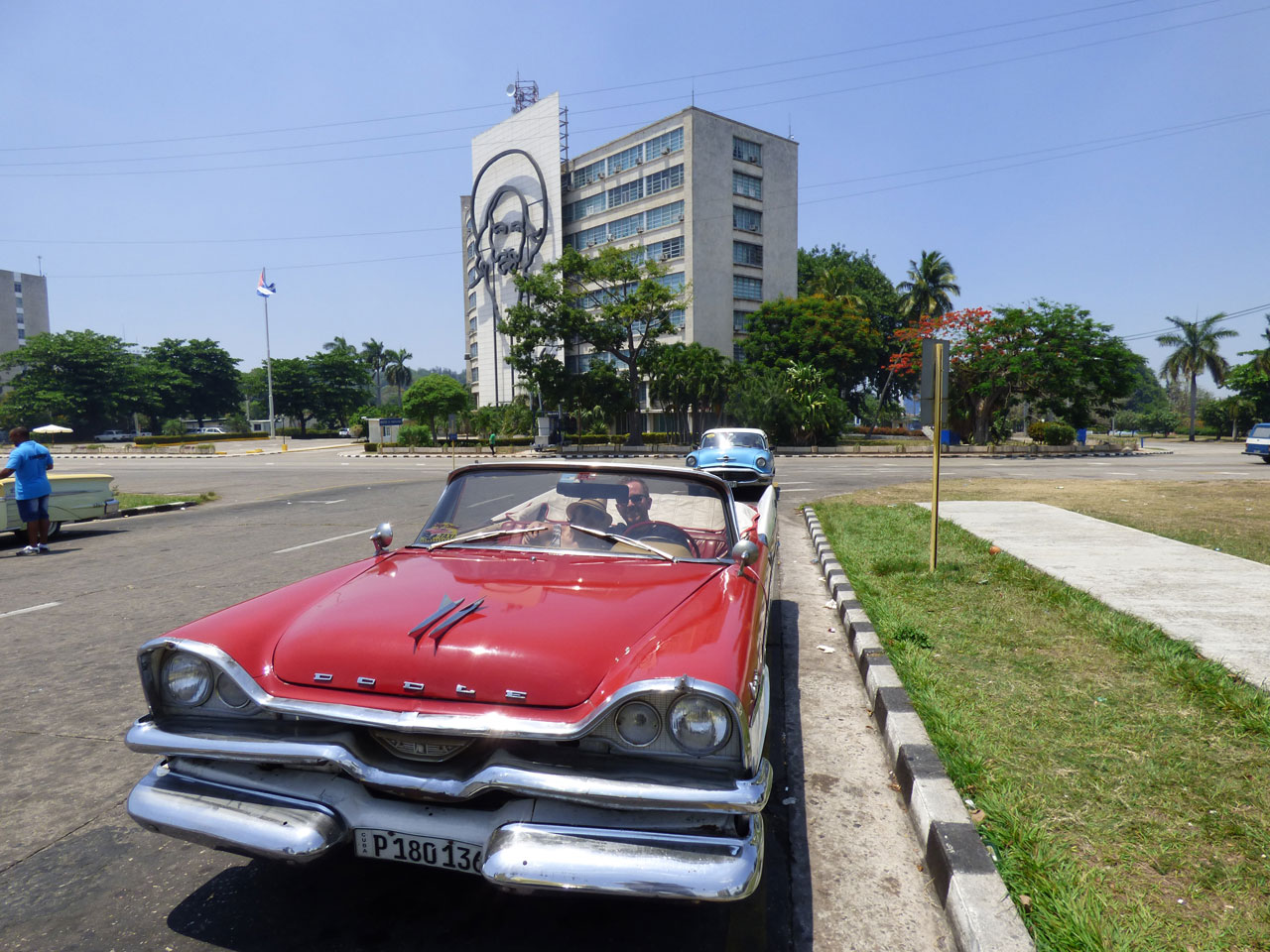 From the square we cruised through the leafier neighbourhood of Vedado, where Havana’s moneyed elite lived back in the pre-Revolution days. The main road through Vedado, Quinta Avenida, is lined by foreign embassies housed in old colonial mansions, and it felt like a completely different city to the dusty streets of Centro. We asked our driver to carry on a little further than the standard classic car circuit, however, out to a suburb on the far western fringes of Havana called Jaimanitas. 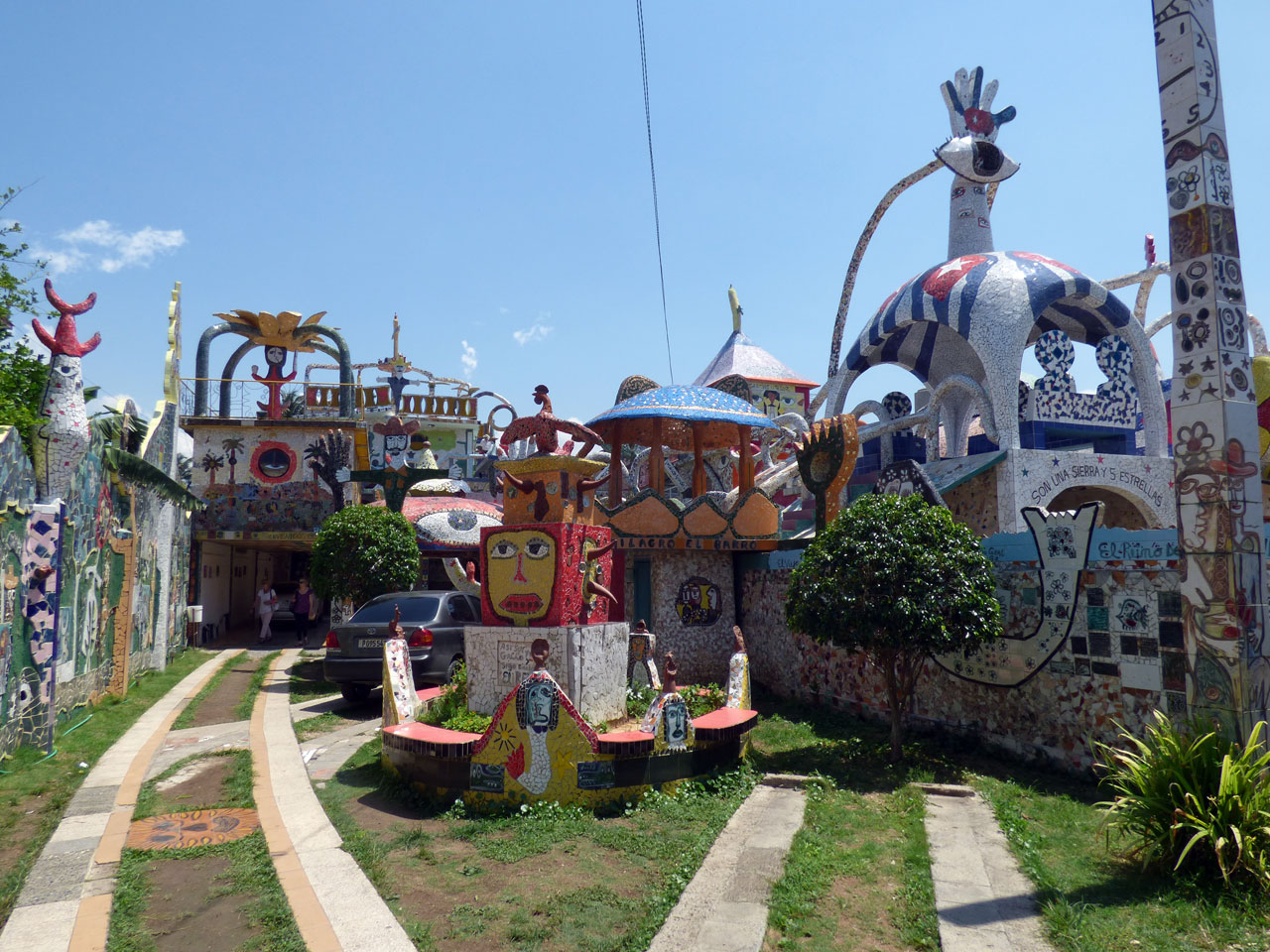 This otherwise unremarkable district is famous as the home of the Cuban artist José Fuster. Over the years Fuster has transformed both his own house and the surrounding streets into a giant work of art, reminiscent of Gaudí’s Park Güell in Barcelona. The house is adorned with bulbous domes and surreal sculptures, covered in mosaics depicting the Cuban national flag, giant love hearts, and even a mural of the late Venezuelan president (and friend of the Castros) Hugo Chávez. The effect is pleasingly bonkers, and the work has an organic, unplanned quality that suggests a bathroom tiling project that got spectacularly out of hand. 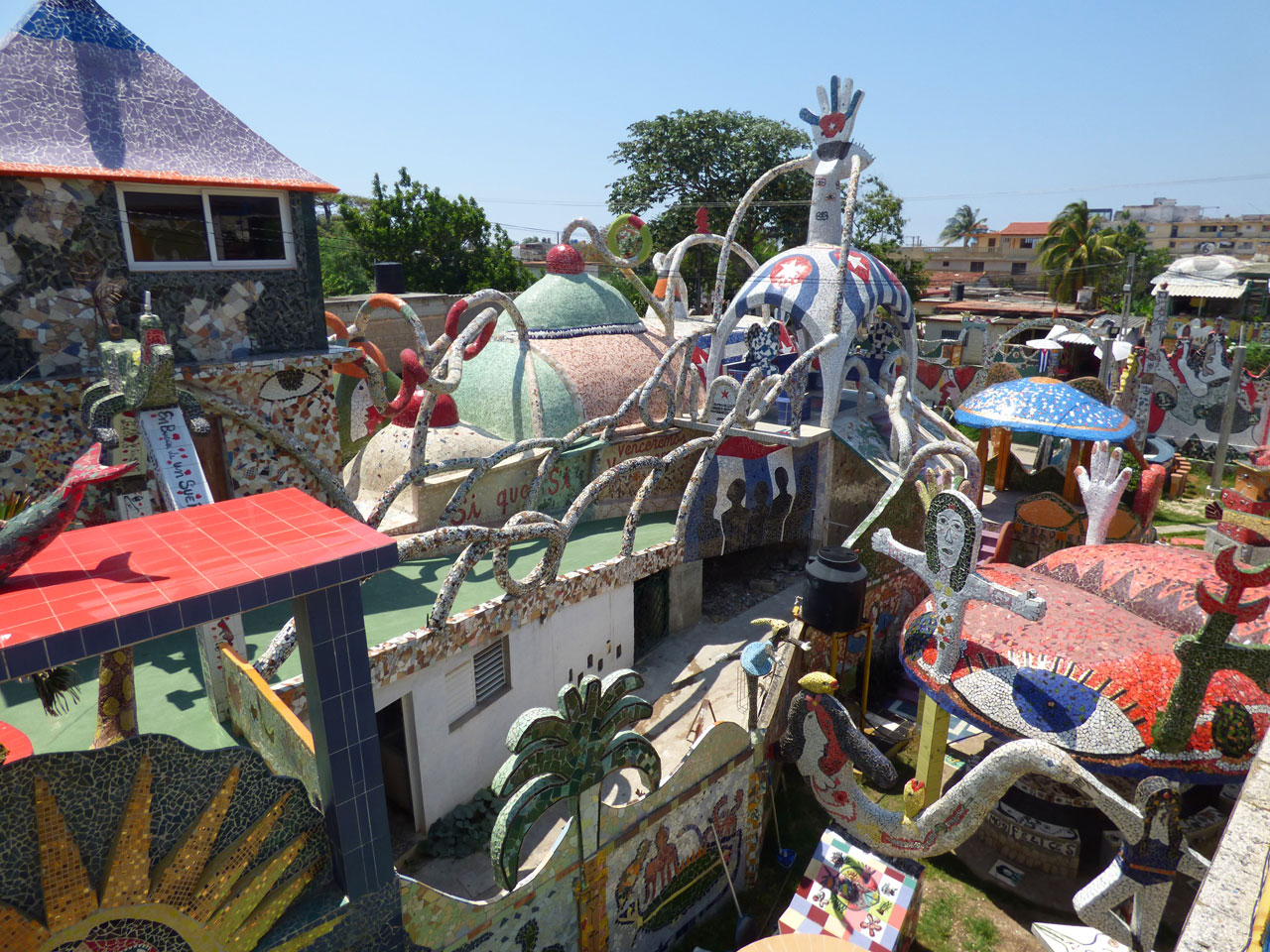 From Jaimanitas we drove back down Quinta Avenida and along the Malecón, Havana’s famous seafront promenade. This stretch of road is flanked on one side by dilapidated buildings turning to dust in the salty air, old hotels falling apart as new structures take shape in anticipation of the coming tide of American tourists. On the other side is the sea wall, where men stand fishing, kids dive into the water to swim, and half of Havana comes each evening to hang out. This iconic stretch is also home to the newly reopened American Embassy, a sturdy concrete pile of a building where the stars and stripes now flap again in the sea breeze. 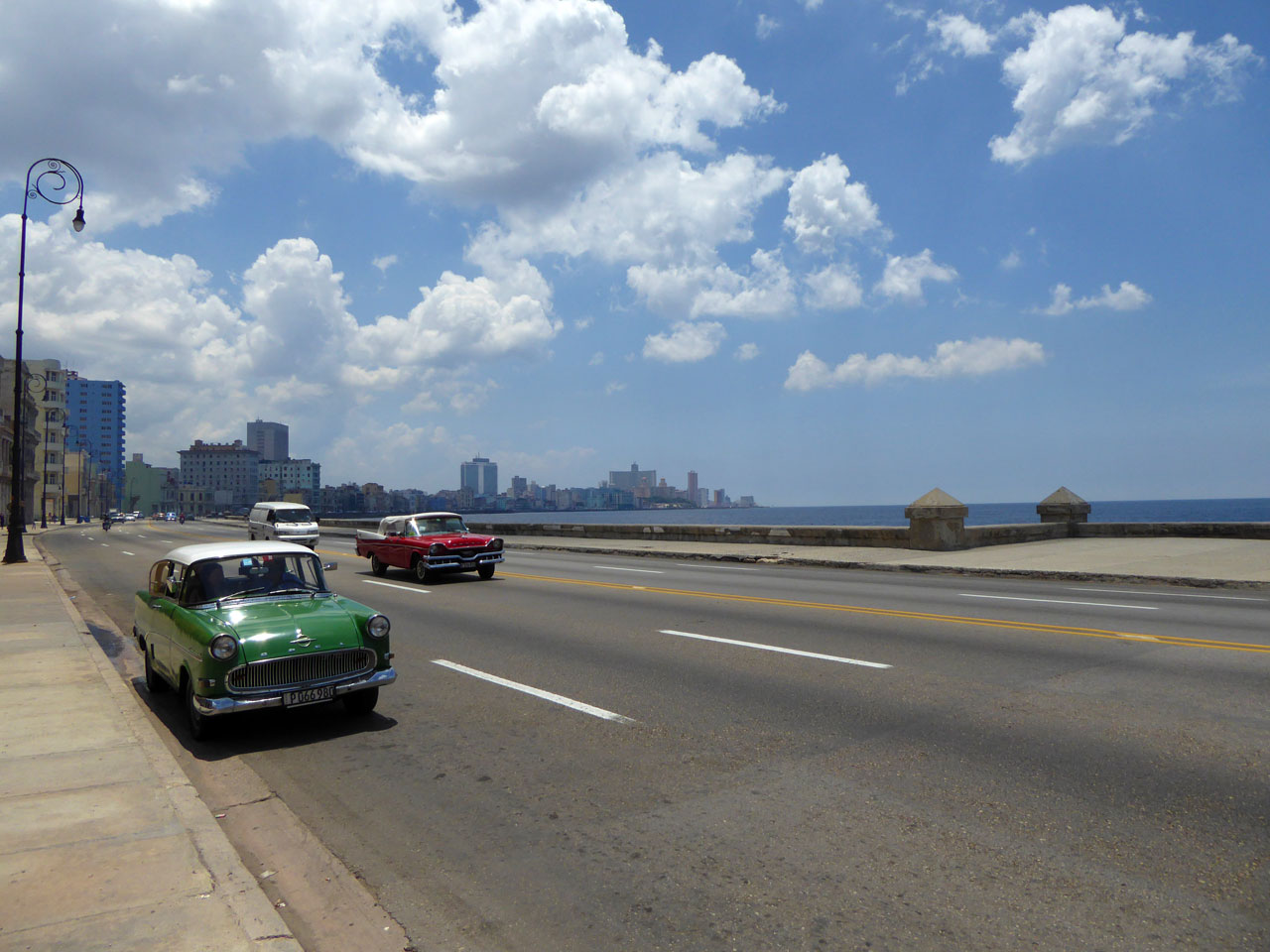 We only spent a few days in Havana, barely time enough to even scratch the surface, and certainly not long enough to accurately gauge how the city might change once the last remaining restrictions on American tourists and investment are lifted. But I really don’t think that things are going to change overnight, in the way that so many people seem to be predicting. People have been saying ‘go to Cuba before the Americans ruin it’ for at least as long as I’ve worked in the travel industry, but it’s an attitude that seems wrong-headed for several reasons. The most obvious is that the end of the economic embargo on Cuba has the potential to transform the lives of ordinary Cubans significantly for the better, and the relaxation of rules on private business is already helping many (though by no means all) to make a decent living from tourism. 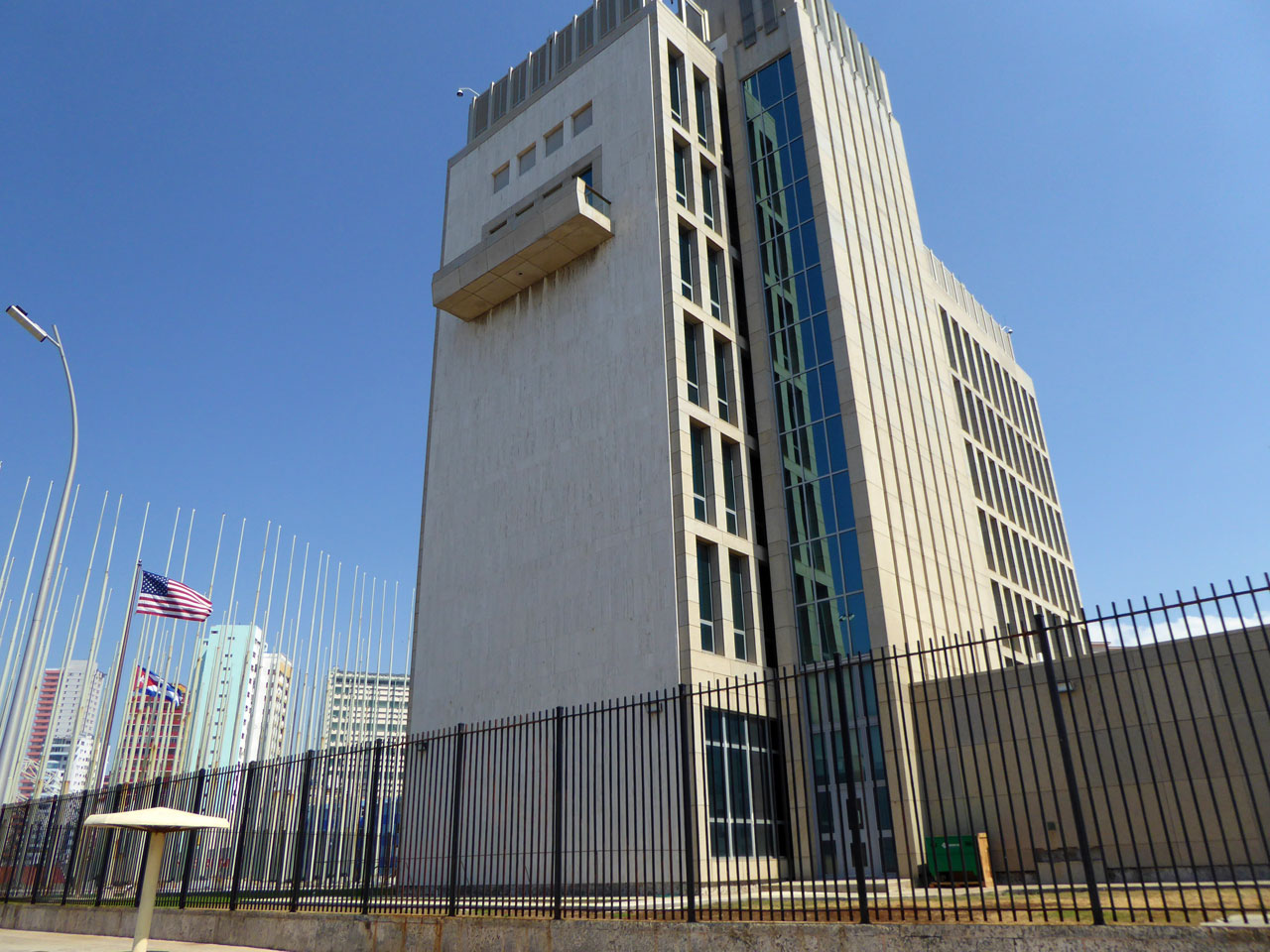 But it’s also an attitude that, as well as being patronising to the many American tourists who are perfectly capable of travelling somewhere without ‘ruining’ it, puts very little faith in the resilience of Cuban culture, and of a political system that has resisted the US for nearly 60 years. By all means go and see Havana now – it’s a fascinating time to be in Cuba – but I think it’s going to be a little while yet before there’s a McDonald’s on the Malecón.

Each day in the Valle de Viñales, at around two in the afternoon, the sky would start to bruise and darken. Fat thunderheads reared up above the mogotes, the lumpy limestone mountains that

In March 1637, an episode in Dutch history that has come to be known as ‘tulip mania’ reached its feverish zenith. The price for the most coveted varieties of tulip had skyrocketed; the

Not Here
—
Havana: The Americans are coming
Share this