It was a crisp and ruddy-cheeked Friday afternoon, the last weekend before Christmas, and Ghent was glowing with that cosy chocolate box cheer that British cities are never quite able to replicate. It was a classic European Christmas scene: the smell of Glühwein and spruce wafting through the air, the twinkling lights, the gabled roofs, the inviting warmth of a centuries-old pub overlooking a glassy canal.

But appearances can be deceiving, and 2016 was not an easy year for Europe. Although the crowds thronging around Ghent's Christmas market seemed merry and carefree, there were reminders of Europe's fragile security. Police armed with machine guns patrolled at the fringes of the fun, and the roads leading into the market were obstructed by heavy concrete barriers. This struck me as sad but probably sensible; the crowds seemed like a soft target. Just a day after we got back from Ghent, a 24-year-old Tunisian man drove a lorry into a Christmas market in Berlin, killing 12 people.

Europe is no stranger to bloodshed in the name of religion, of course, and Ghent lies close to the fault line along which Catholic Belgium split from the Protestant Netherlands in 1830, following centuries of interminable imperial warfare. The city has had its ups and downs, but the grand buildings of the historic centre are a testament to the power and prosperity that has often coursed through these streets. Our first glimpse of the city's famous skyline came as we crossed St Michael's bridge, which straddles the river Leie just to the west of the city centre. From here we had a fine view of the three most famous buildings in the city: the soaring towers of St Nicholas' Church, the Belfry and St Bavo's Cathedral. The river here is flanked by two quays, the Graslei and the Korenlei, where grain was unloaded during the city's medieval heyday, and the buildings along the riverfront looked particularly beautiful against the pastel blue winter sky. Even the kids blasting out dancehall and getting drunk by the river couldn't sully the scene. 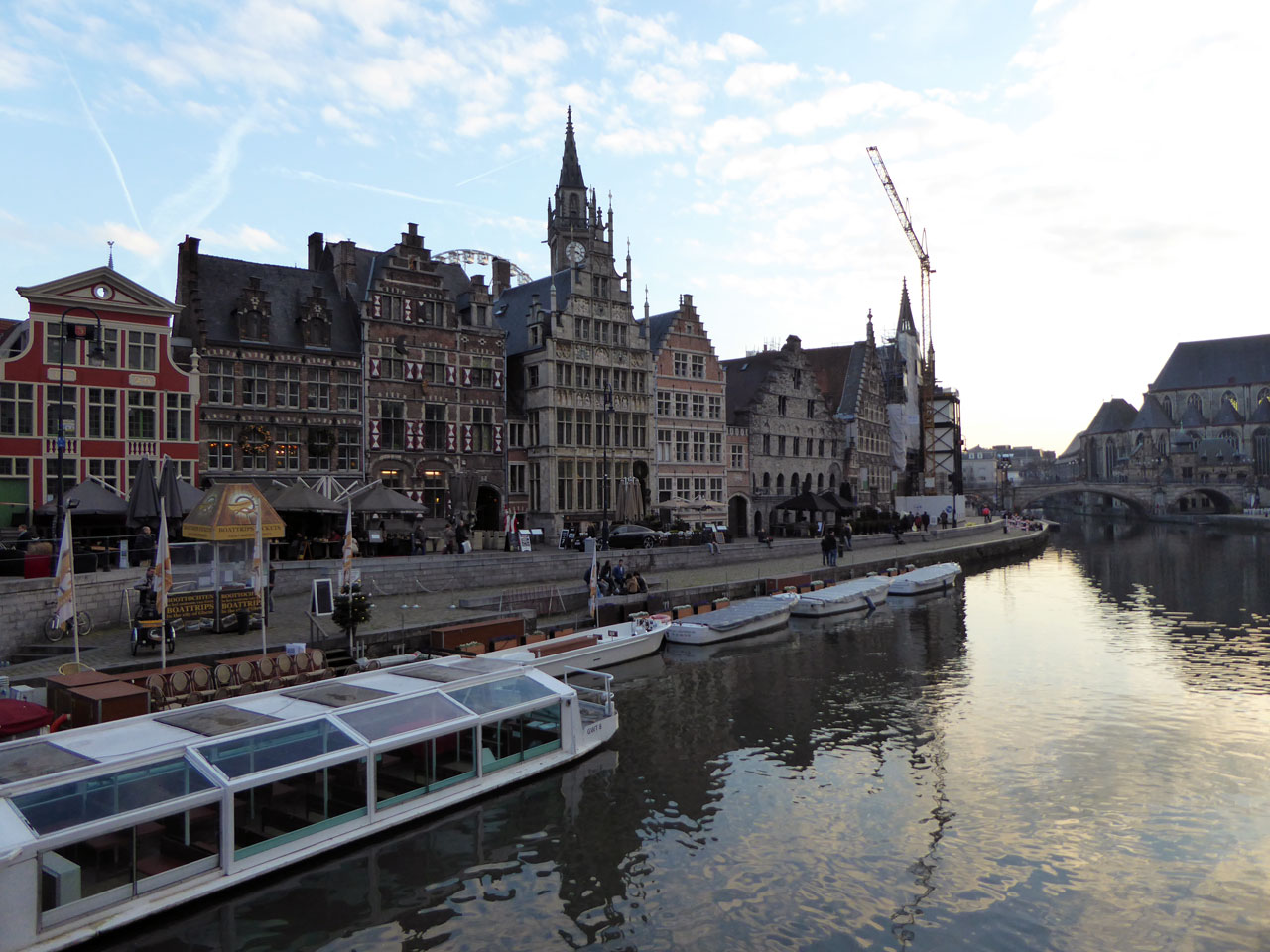 Ghent has a youthful and creative buzz about it, and it felt like a living, breathing city rather than an open air museum geared towards tourists. The old streets were full of quirky cafés and cosy pubs, like the bar we were at one evening where a man dressed as Santa Claus burst in, downed a couple of shots with the bar staff, then disappeared into the night. Later on we found ourselves in a tiny jazz bar packed with beardy types, where the painstakingly dishevelled barman scolded me for ordering a Leffe.

I shrugged a half-hearted apology for my insufficiently obscure choice of beverage. Later on I asked him to recommend something better, and he poured me a more expensive beer that tasted exactly like Leffe. 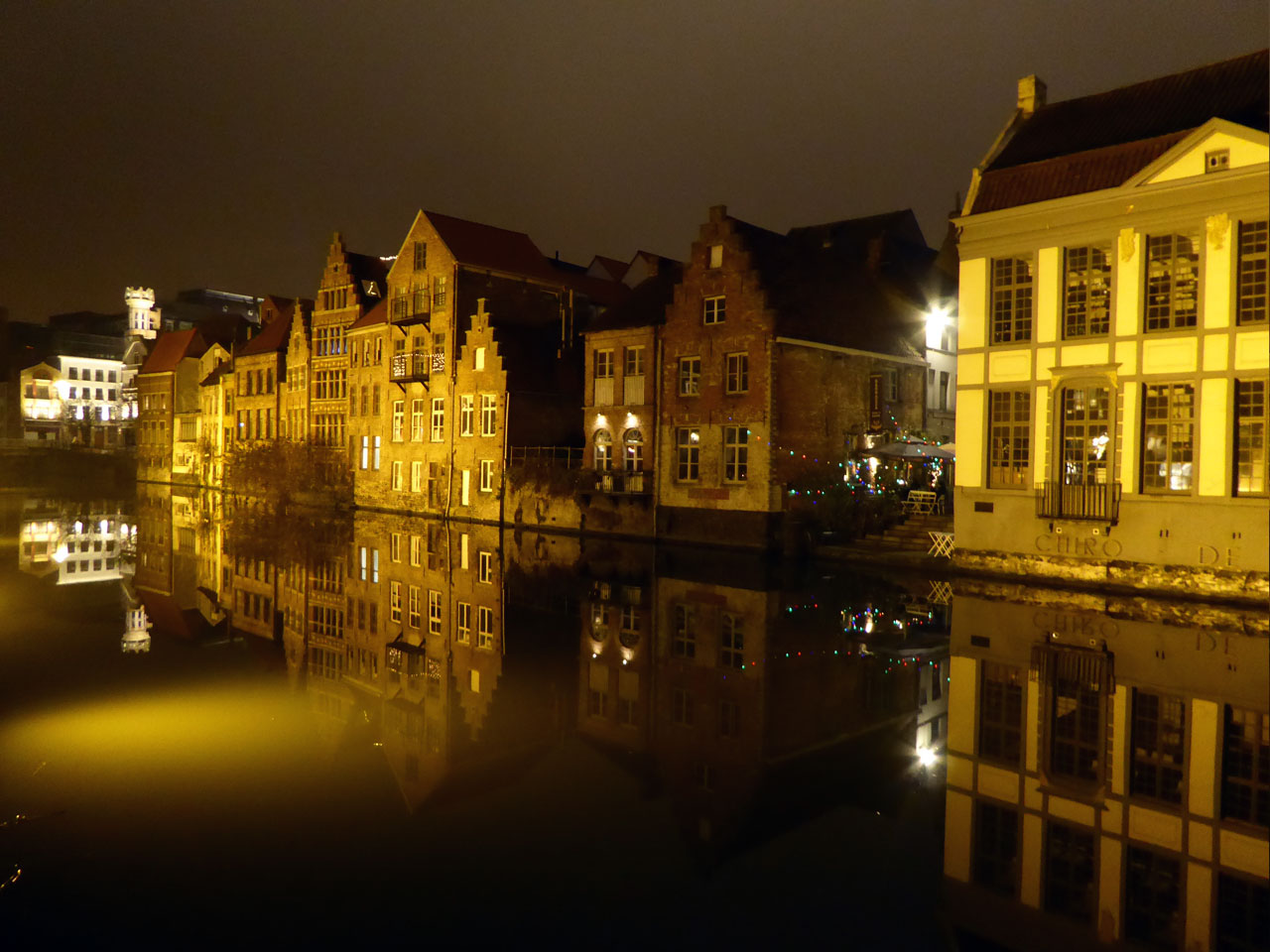 On Saturday morning we walked into town along the northern loop of the Leie, through the picturesque old neighbourhood of Patershol. We stopped at a twee little sweet shop filled with colourful confectionery, including piles of cuberdons, purple sugary lumps that are also known as 'Ghent noses' on account of their unusual shape.

Nearby was the Huis van Alijn, a museum of 20th century Flemish life housed in an old almshouse, where the exhibits ranged from Catholic votive offerings to creepy toys and christening dresses. Towards the end of the exhibition there was a section devoted to various cultural ephemera from the second half of the 20th century, and the 1980s room made me feel rather old, full of toys and games that I remembered from my own childhood. 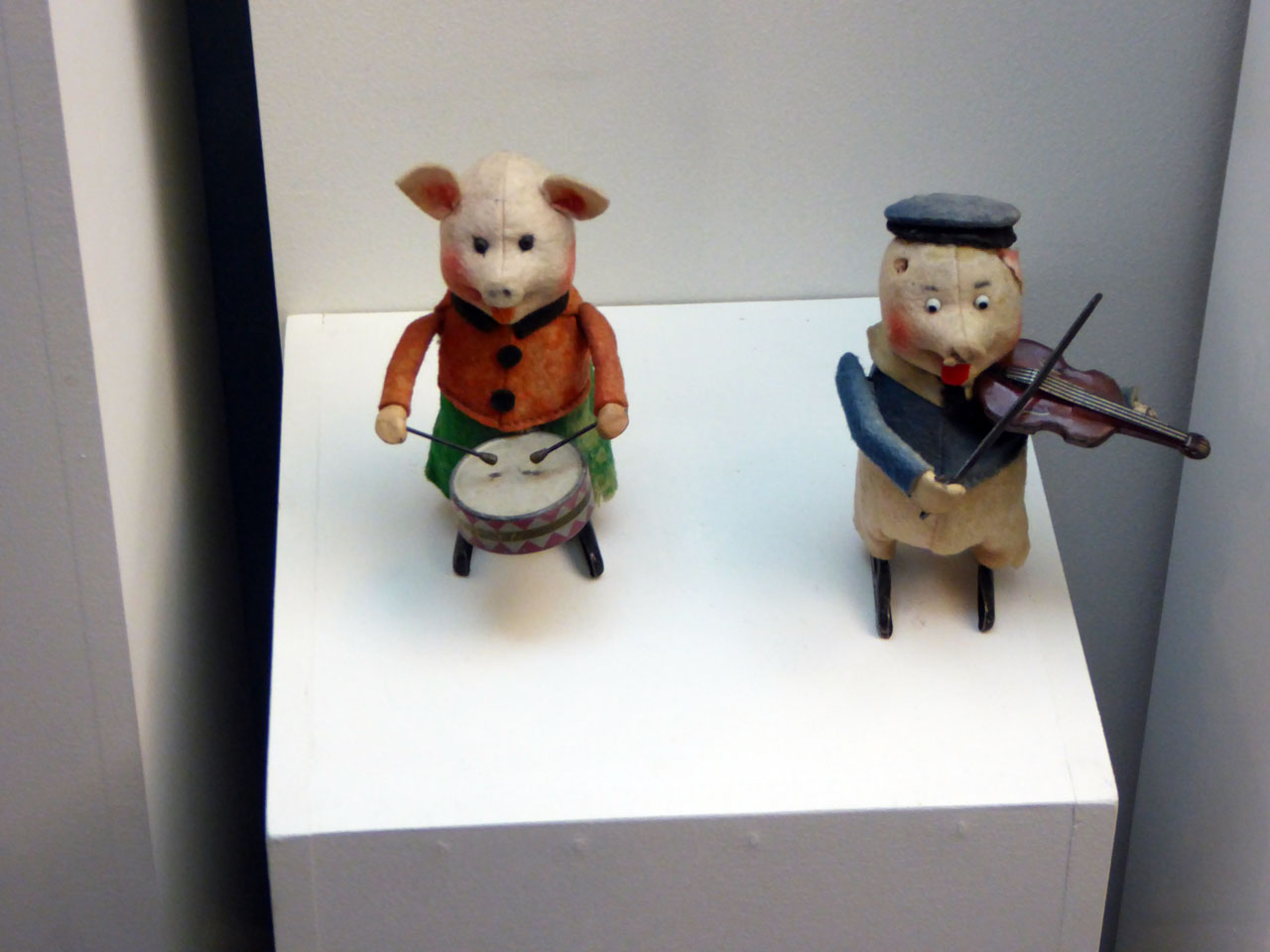 Thankfully there were plenty of much older things in Ghent to reassure me of my youthfulness, such as the 16th century St Bavo's Cathedral. This cavernous building is best known for its famous altarpiece, Hubert and Jan Van Eyck's 'Adoration of the Mystic Lamb', which has often been described as the most influential painting in history. To my untrained eyes it didn't seem that special on first glance, just another ostentatious tableau laden with Catholic iconography. But, with the help of the audio guide provided, I began to appreciate the rich and esoteric details as my eyes adjusted to the dimly lit room.

The altarpiece is comprised of 20 panels in total, although not everything on display in the cathedral is original. In 1934 two panels were stolen, and though one was returned a few days later, the whereabouts of the last panel remains one of the art world's greatest unsolved mysteries. During the Second World War the Nazis dispatched investigators to Ghent to find the missing panel for Hitler, without success. Some people even believe that the panel may be hidden in the cathedral itself. 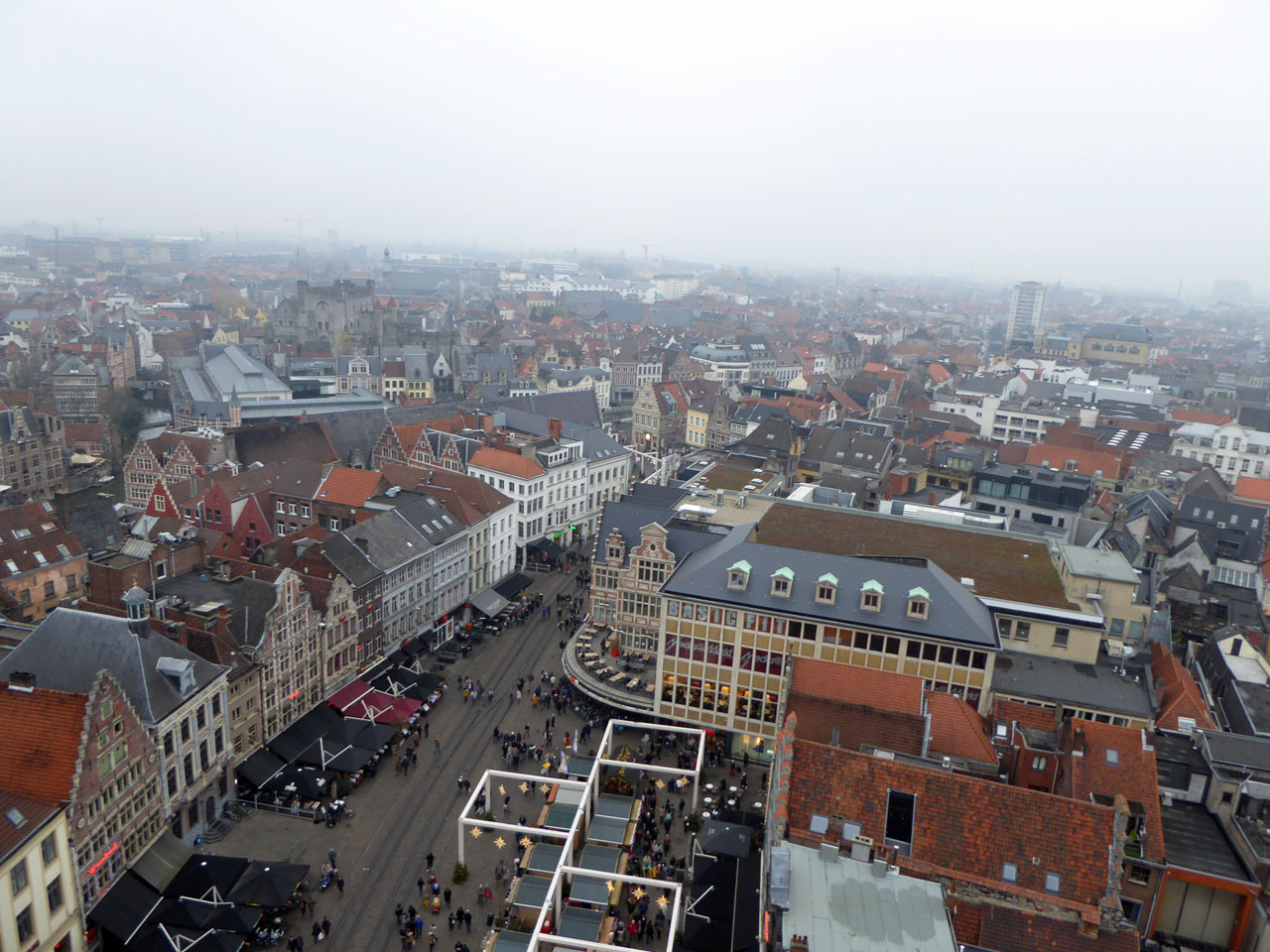 On our final day we paid a visit to the Gravensteen, the old castle of the Counts of Flanders. This hefty structure was like something straight from a fairy tale, the sturdy walls surrounded by the natural moat of the river. I can't recall ever seeing such a well preserved castle right in the centre of a city, but the Gravensteen came remarkably close to being demolished in the 19th century. By that time the castle had become an industrial complex, with much of the original medieval stonework obscured by cotton mills, workshops and housing. It's hard now to imagine such a lack of interest in preserving this handsome old building, but at that time the castle was still considered a symbol of the oppression, corruption and cruelty of the Counts. 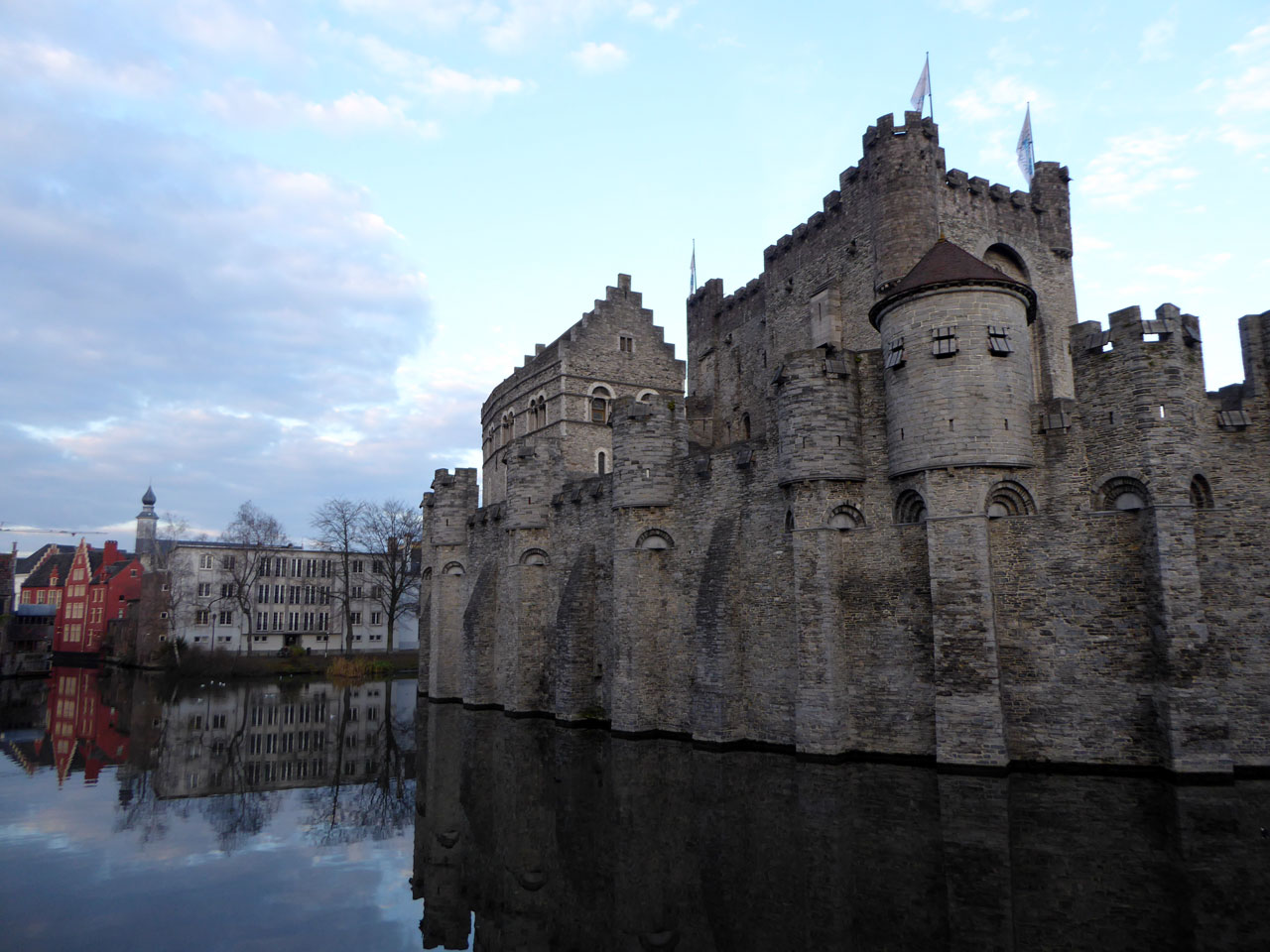 Today, mostly restored to its former glory, the castle houses a museum that recalls those days, filled with medieval weapons, suits of armour and instruments of torture. There were glass cases filled with flails, halberds and massive double handed swords, and on the next floor, after a dizzying climb up the spiral staircase, we saw thumb screws, face shackles and horrific spiked metal collars. Paintings and illustrations showed how these awful contraptions were used to punish criminals, to restrain the mentally ill, and to teach a lesson to anyone who got on the wrong side of the Counts. A reminder that, for all its current problems, Europe has seen much darker days than today.

My first fashion faux pas in Milan was going outside without a coat on. It may have been a sizzling 25°C in the early April sun, but I felt pretty silly in