We shuffled through the Pile Gate, the tourist-choked entrance to Dubrovnik’s Old Town, in something of a daze. After two weeks in the Balkans meandering along the road less travelled, the herd of badly dressed, camera-wielding cruise ship passengers spewing out across the gleaming marble of the Stradun, Dubrovnik’s main thoroughfare, came as a bit of a culture shock. 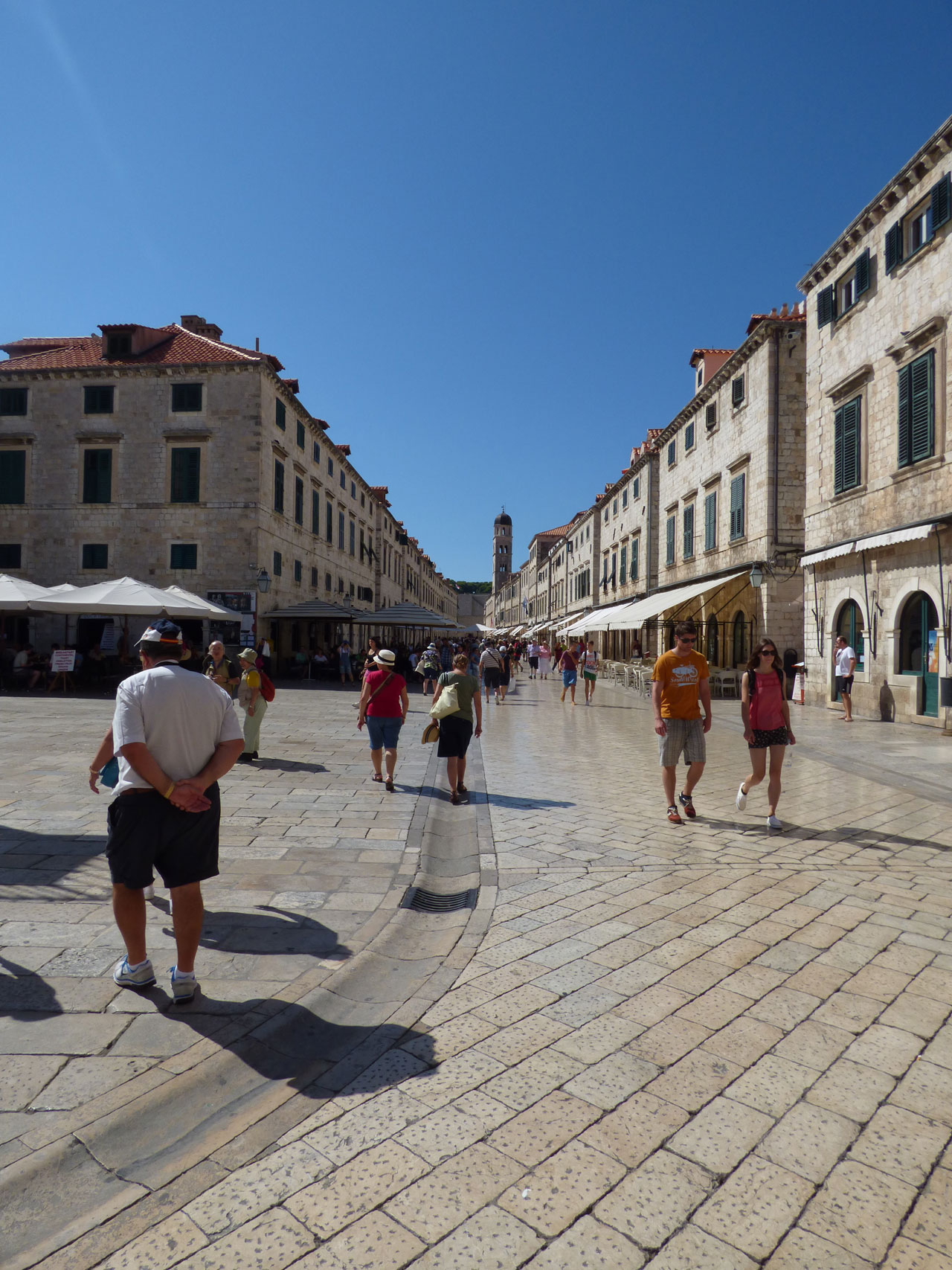 Of course, crowds are to be expected in Dubrovnik in the height of summer. The ‘pearl of the Adriatic’ has been at the forefront of Croatia’s re-emergence as a tourist hotspot since the strife of the 1990s, and the Old Town, a UNESCO World Heritage Site, has been painstakingly restored to its former lustrous glory. Indeed it’s hard now to imagine the scene on 23 October 1991, when the Yugoslav People’s Army commenced shelling Dubrovnik’s historic centre, an act that came to symbolise the senselessness of the ethnic violence that erupted across the region.

We found poignant reminders of the conflict at the War Photo museum, a collection of photography from conflict zones around the world. The sheer futility of war is highlighted again and again, the same stories being played out all over the world: Lebanon, Iraq, the Democratic Republic of Congo, Gaza, Ukraine. Startling images portraying the fear in the eyes of civilians on the front line, the dulled senses of drugged child soldiers, the hope and despair of refugees. For me, however, the most shocking images were those documenting the break-up of Yugoslavia. Having spent the last two weeks seeing the modern face of these newly independent nations, it was sobering to be reminded of those images that flashed across the news every night 20 years ago: sniper fire in Sarajevo, ethnic cleansing in Kosovo, and Dubrovnik on fire. 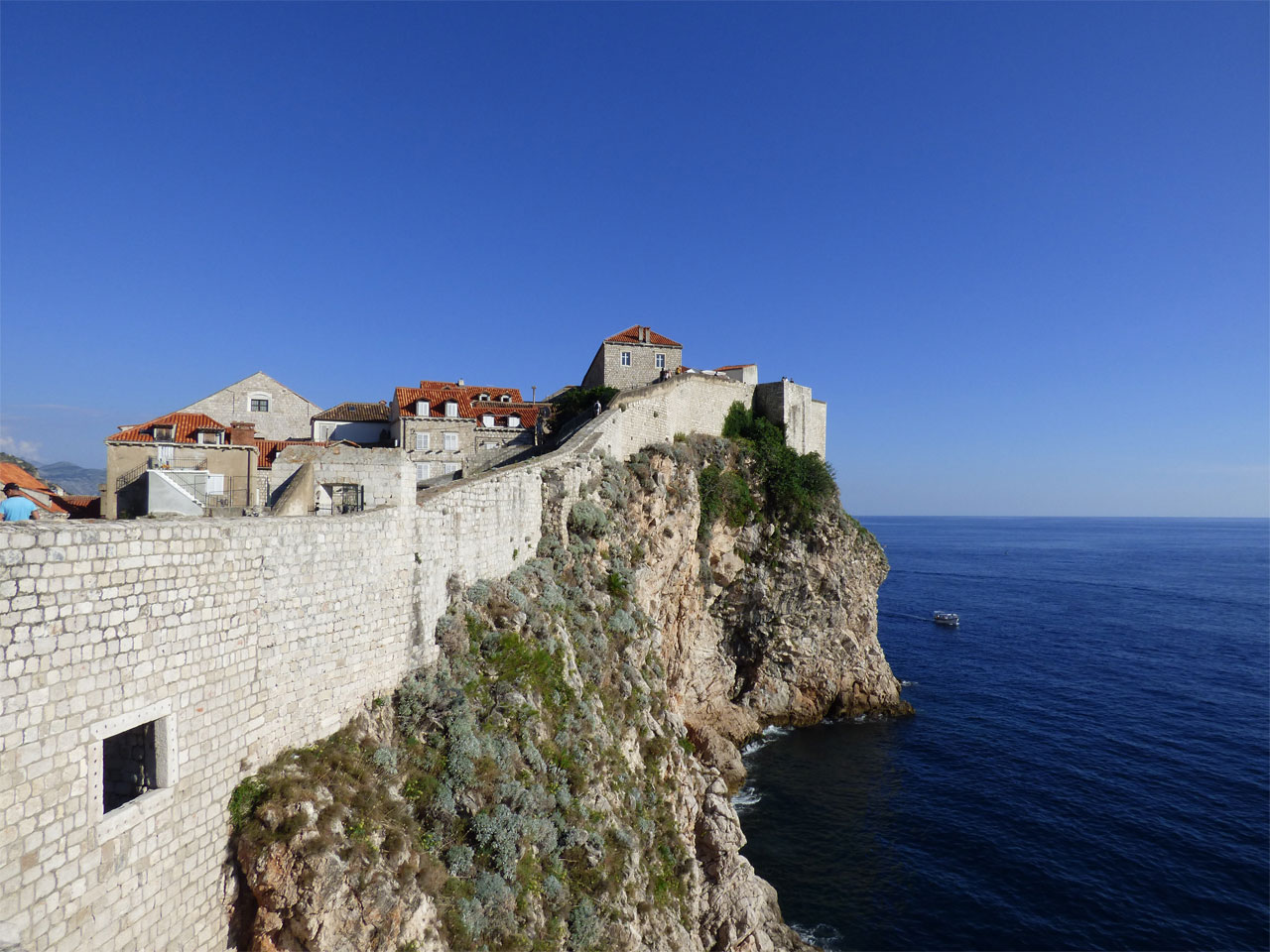 From the darkness of the recent past, we emerged back out into the sunlight and spent an hour or so drinking in Dubrovnik in all its fully restored glory, circumnavigating the top of the city walls. The rusty red of the roof tiles and the deep sapphire of the sea are even more vivid up here, and from above you really get a sense of how perfectly preserved the Old Town is, not a single ugly building within the confines of the walls. The views reach a crescendo at the top of the Minčeta Tower, the highest point of the fortifications, where you have the whole of the old town laid out before you, the same vista that adorns every postcard, fridge magnet and keyring. 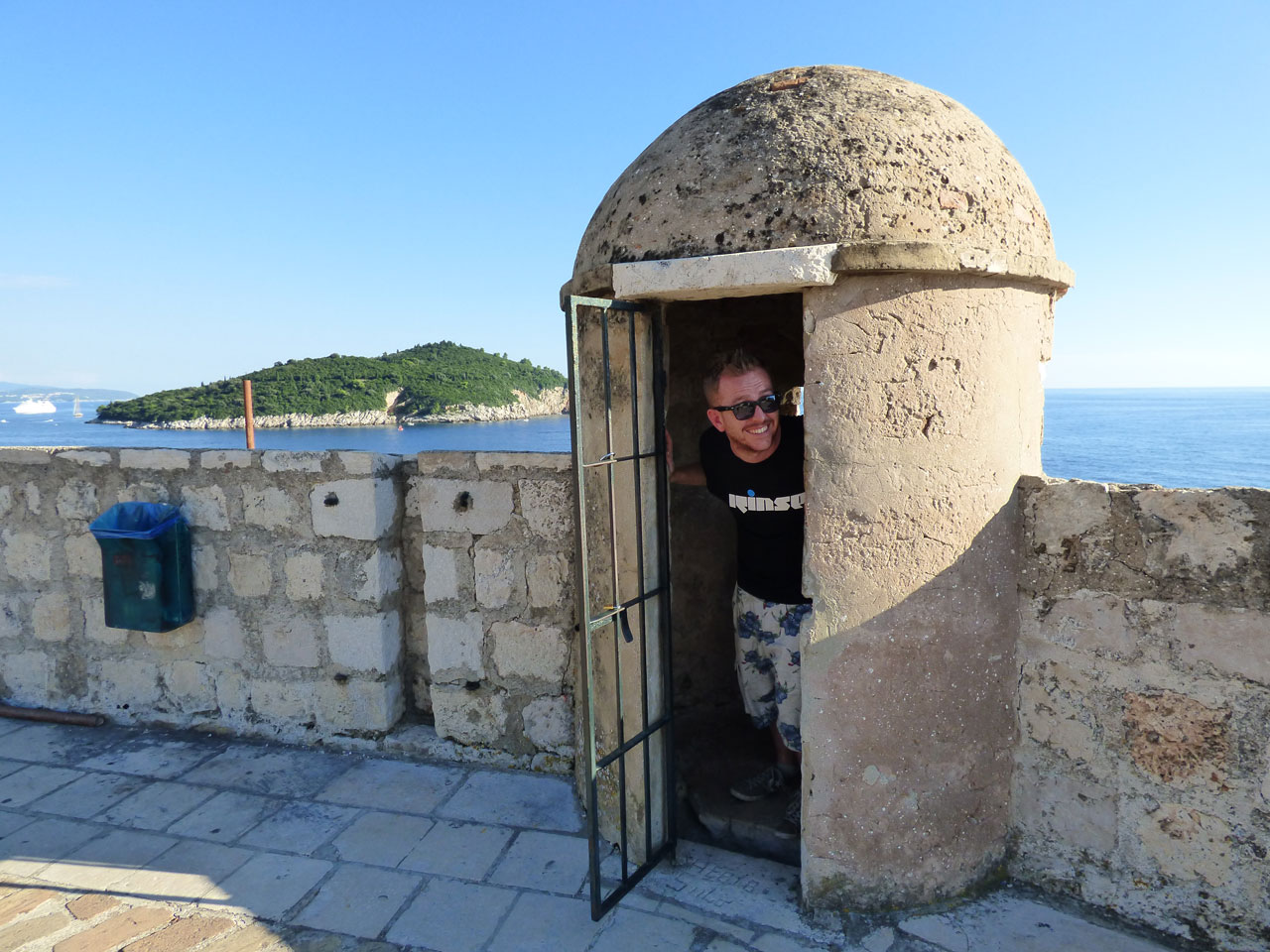 As the sun goes down, the crowds thin a little, and it’s a good time to track down the Buza Bar, a watering hole wedged into the cliffside just outside the city walls. Although overpriced, and no longer quite the secret that it once was, it manages to remain on just the right side of the line marked ‘tourist trap’. And there are plenty of those, as you would expect; it’s worth asking at your hotel or B&B for some dinner recommendations. We had a little taste of a country we didn’t manage to visit on this trip, at a small and very popular Bosnian restaurant called, for no obvious reason, the Taj Mahal. Dubrovnik isn’t far from Bosnia-Herzegovina, and is actually situated on a little strip of land that’s cut off from the rest of Croatia by Bosnia’s 12-mile stretch of coastline. It’s a bizarre situation, which the Croatians are hoping to circumvent by [building a bridge across the sea](http://www.economist.com/blogs/easternapproaches/2013/07/croatia" target="_blank). 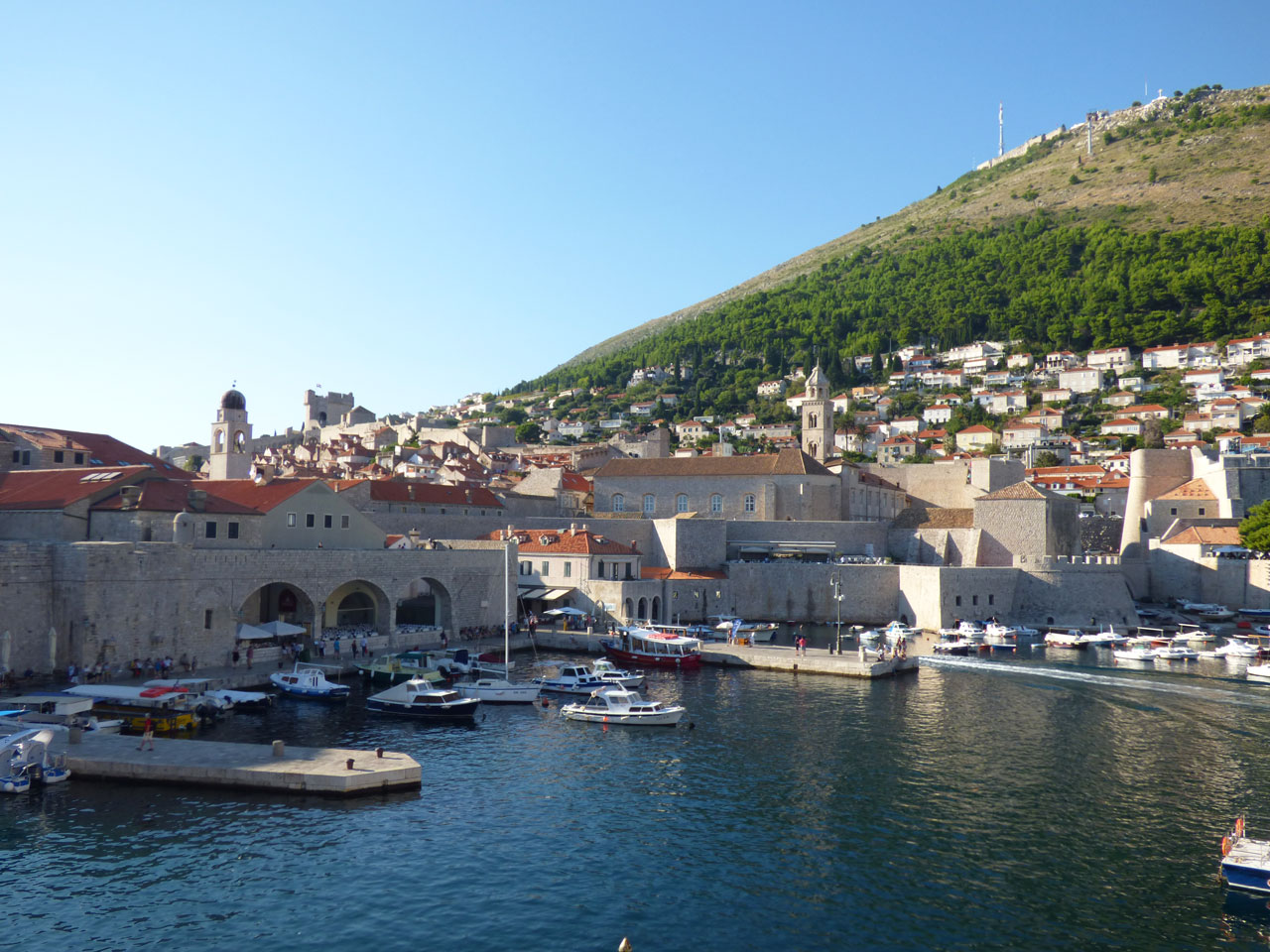 The Taj Mahal wasn’t the only wonder of the world we unexpectedly came across in Croatia; we also swam in the ‘Dead Sea’, a salty lagoon on the island of Lokrum. This forest-clad outcrop, a short ferry ride from Dubrovnik, is a popular day trip destination, but it’s big enough to escape the cruise ship crowds. There isn’t a huge amount to do once you’re there, but it’s home to some pleasantly shady walking trails, several rocky beaches, a derelict monastery and a few peacocks, which were apparently introduced to the island by an Austrian archduke in the 19th century. 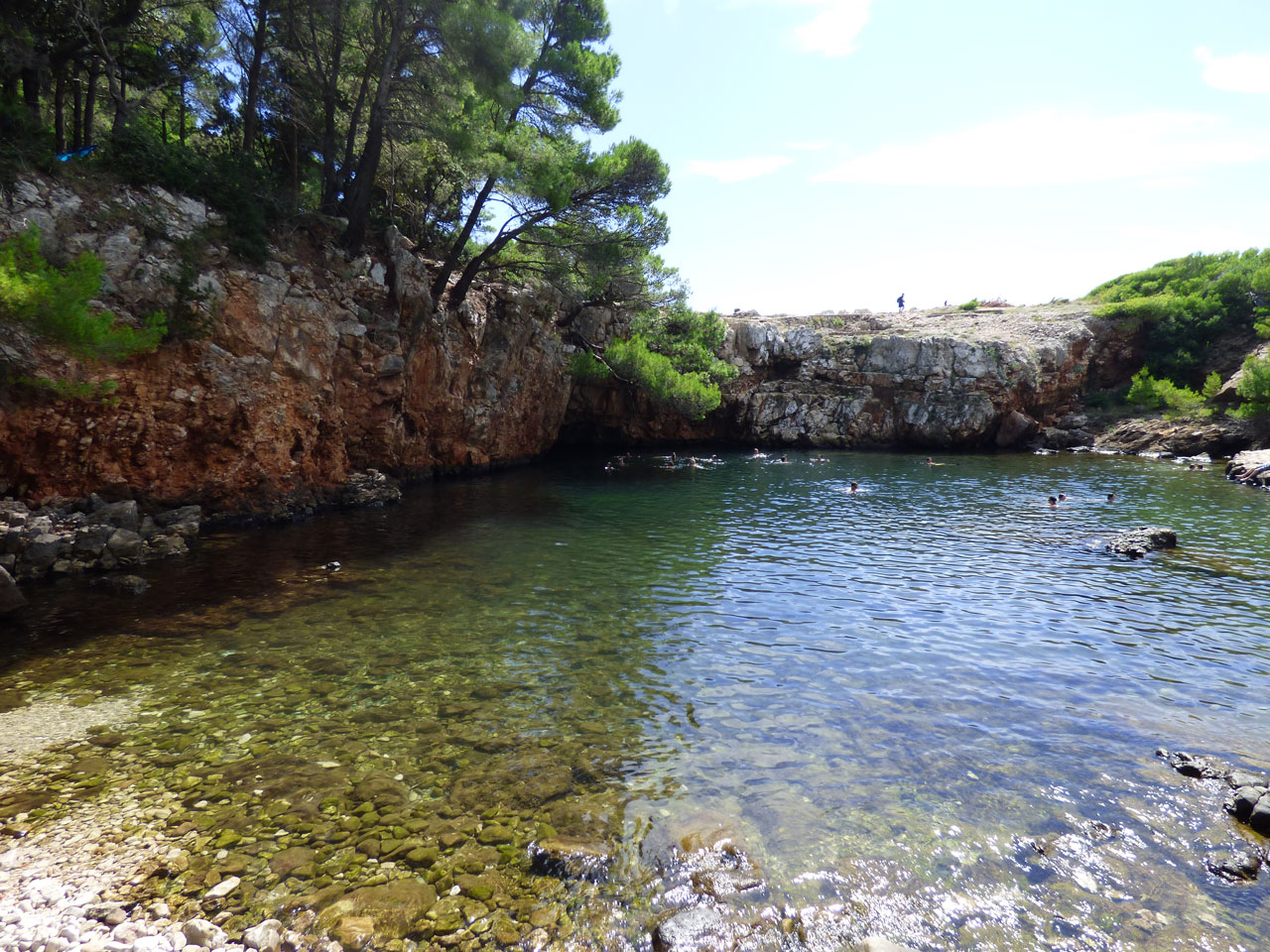 Of course, if you really want to avoid the tourist hordes, then don’t go to Dubrovnik, especially in summer. You’ll never have the sights to yourself like you might in [Tirana](GHOST_URL/welcome-to-tirana/" target="_blank) or [Tashkent](GHOST_URL/tashkent/" target="_blank) or Timbuktu. But then you’ll be missing out on one of the most picturesque cities in Europe, full of friendly people who mostly seem delighted to have tourists visiting again – and who can blame them, given what they’ve been through.