As something of a compulsive travel planner, it’s not often that I turn up in a city with no idea of what to do when I get there. But Cartagena was the exception to the rule, a place I knew very little about before I arrived. Situated about 20 miles from Murcia on a magnificent natural harbour, Cartagena is one of southern Spain’s less celebrated cities; it’s much more likely that you’ve heard of its namesake on the Caribbean coast of Colombia, despite the fact that the Spanish Cartagena has a rich history dating back over 2,000 years. 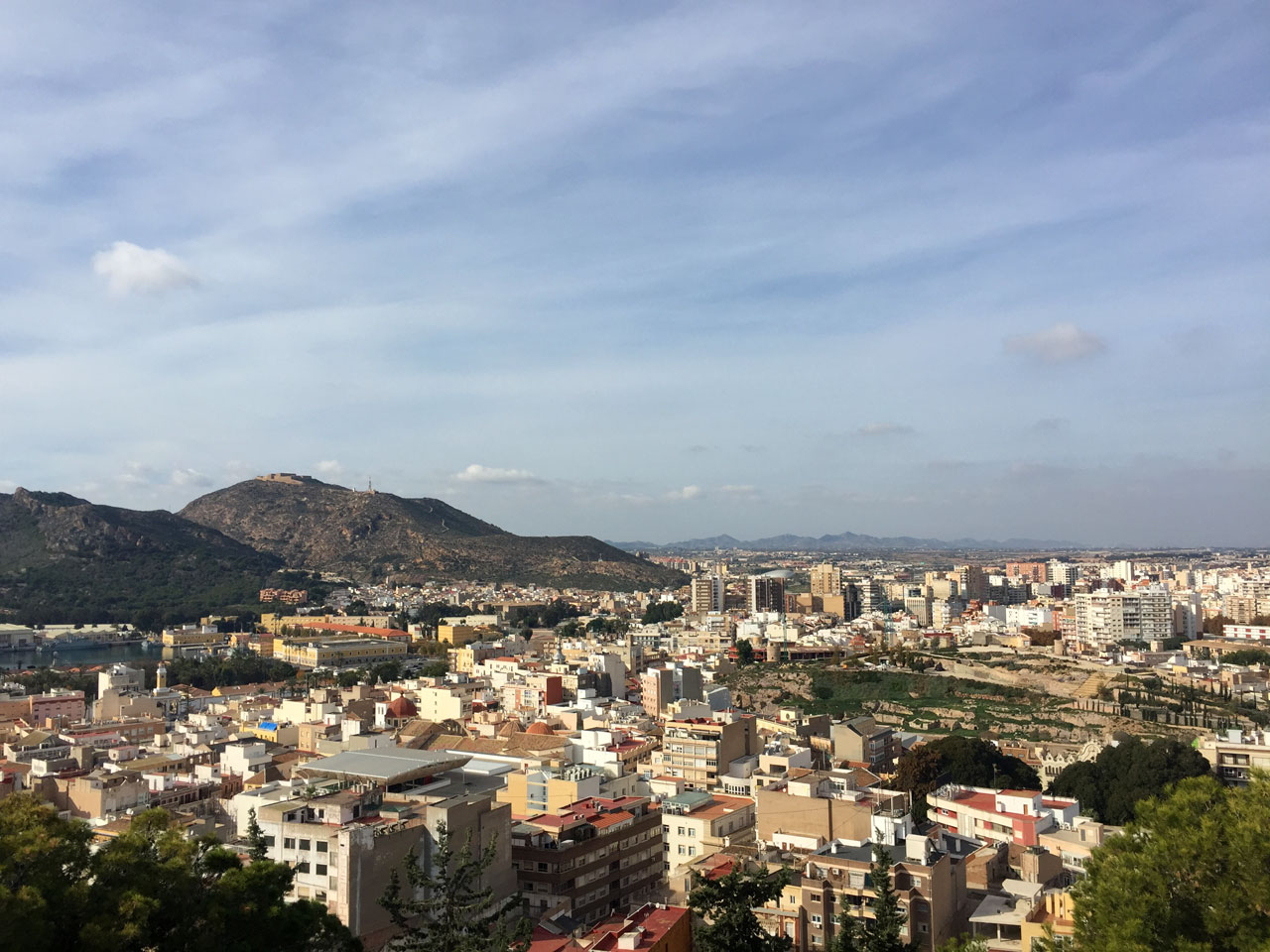 The city was founded by the Carthaginians in 228 BC, who named it Qart Hadasht after their capital in North Africa. The original Qart Hadasht, which means simply ‘New City’, is better known to students of classical history by its Anglicised name of Carthage. The Carthaginians who settled in this corner of the Iberian peninsula were soon overrun by the Romans, who renamed the city Carthago Nova – literally the ‘New New City’! In the fifth century the city was sacked by the Vandals, who then gave way to the Visigoths, followed by the Byzantines. In 714 AD the city fell to the Ummayads, and was ruled by a succession of Muslim dynasties, until 1245 when the Christian armies of the north swept in and reclaimed the city for the crown of Castile. 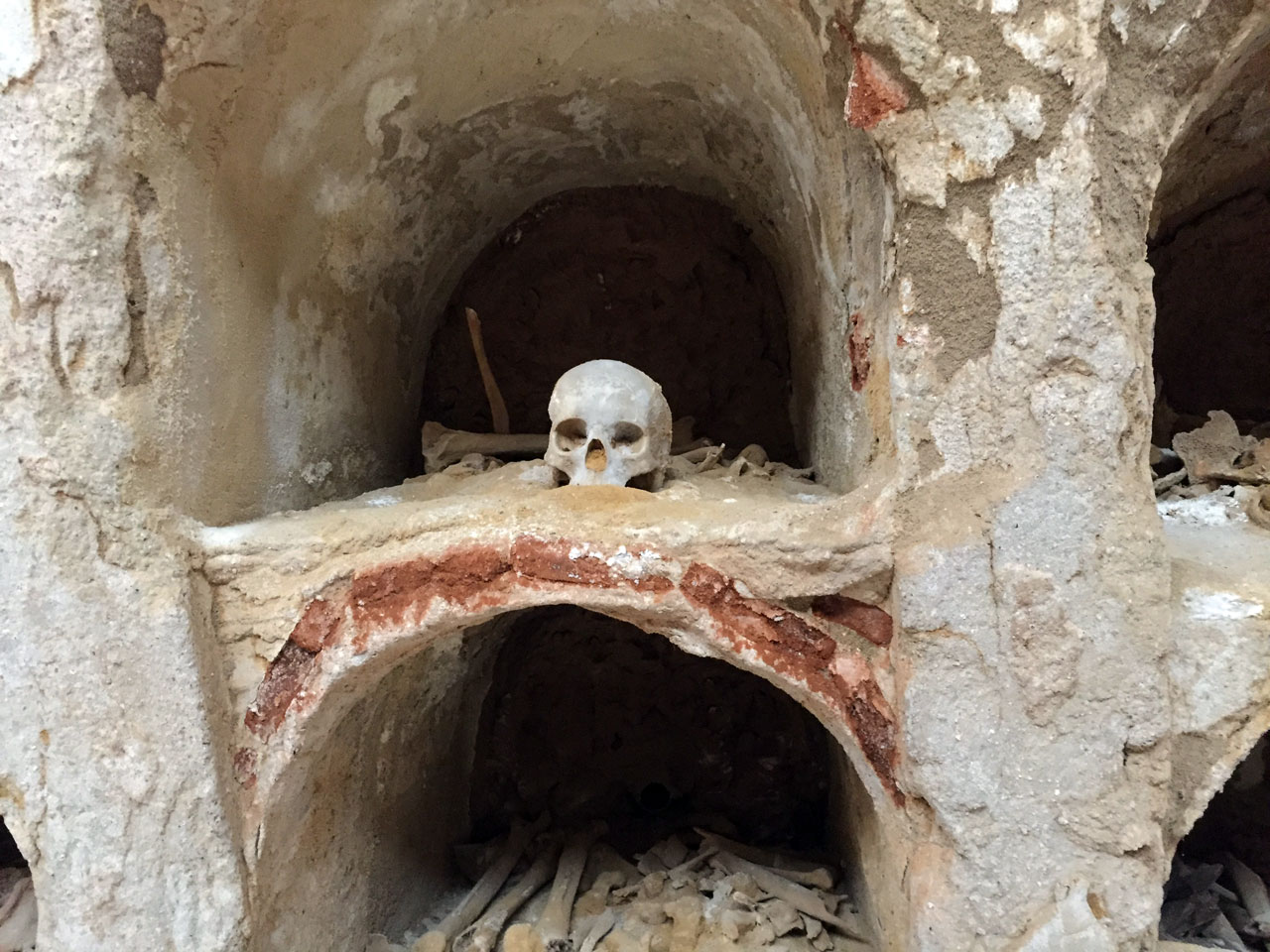 Our exploration of Cartagena began at a museum dedicated to one of the city’s oldest archaeological sites, the Punic Wall. This wall is all that’s left of the fortifications that surrounded the original settlement of Qart Hadasht, and to be honest it wasn’t hugely impressive; the history represented by the bricks on display underneath the glass floor was a lot more interesting than the physical remains of the wall itself. It was hard to visualise the city as it would have been during the time of the Carthaginians, even with the aid of a video reconstruction. The modern streets around the museum seemed run down, and many of the people looked like they were suffering the effects of Spain’s current economic woes. 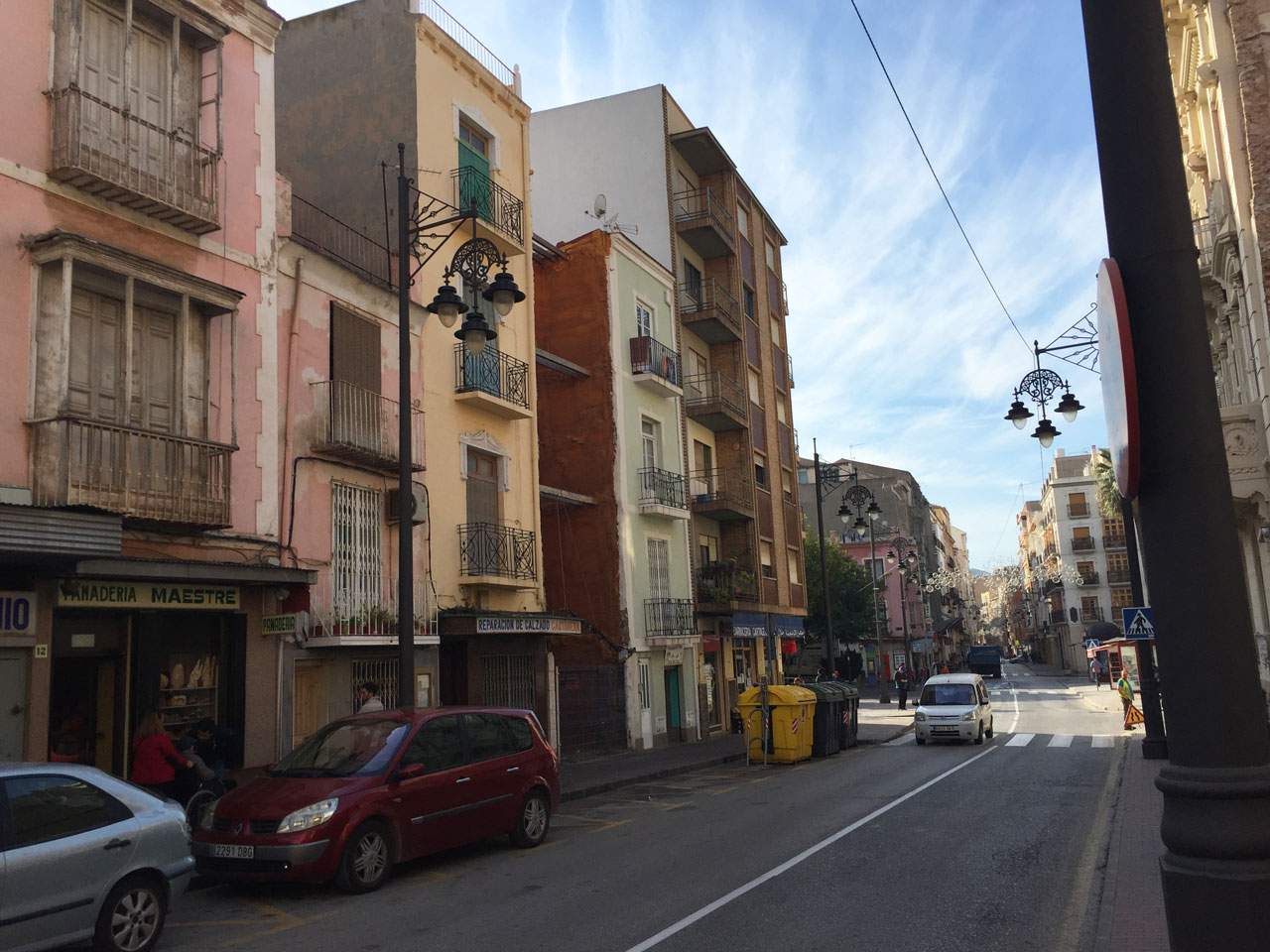 From the Punic Wall we headed to the rather more modern panoramic lift, a vertical elevator that whisked us from street level up the sheer side of a hill. A vertiginous metal walkway led us to the highest point in the city, which is crowned by the medieval Castillo de la Concepción. This castle, a fairly unremarkable box-like structure, contained another slightly disappointing museum, guarded by a pair of mean-looking peacocks. The views from the top made the ascent worthwhile, however, a 360 degree vista with the harbour to the south and a ripple of mountains to the north. Laid out below us we could see Cartagena’s most impressive historical remnant, the Roman theatre, which we decided to head for next. 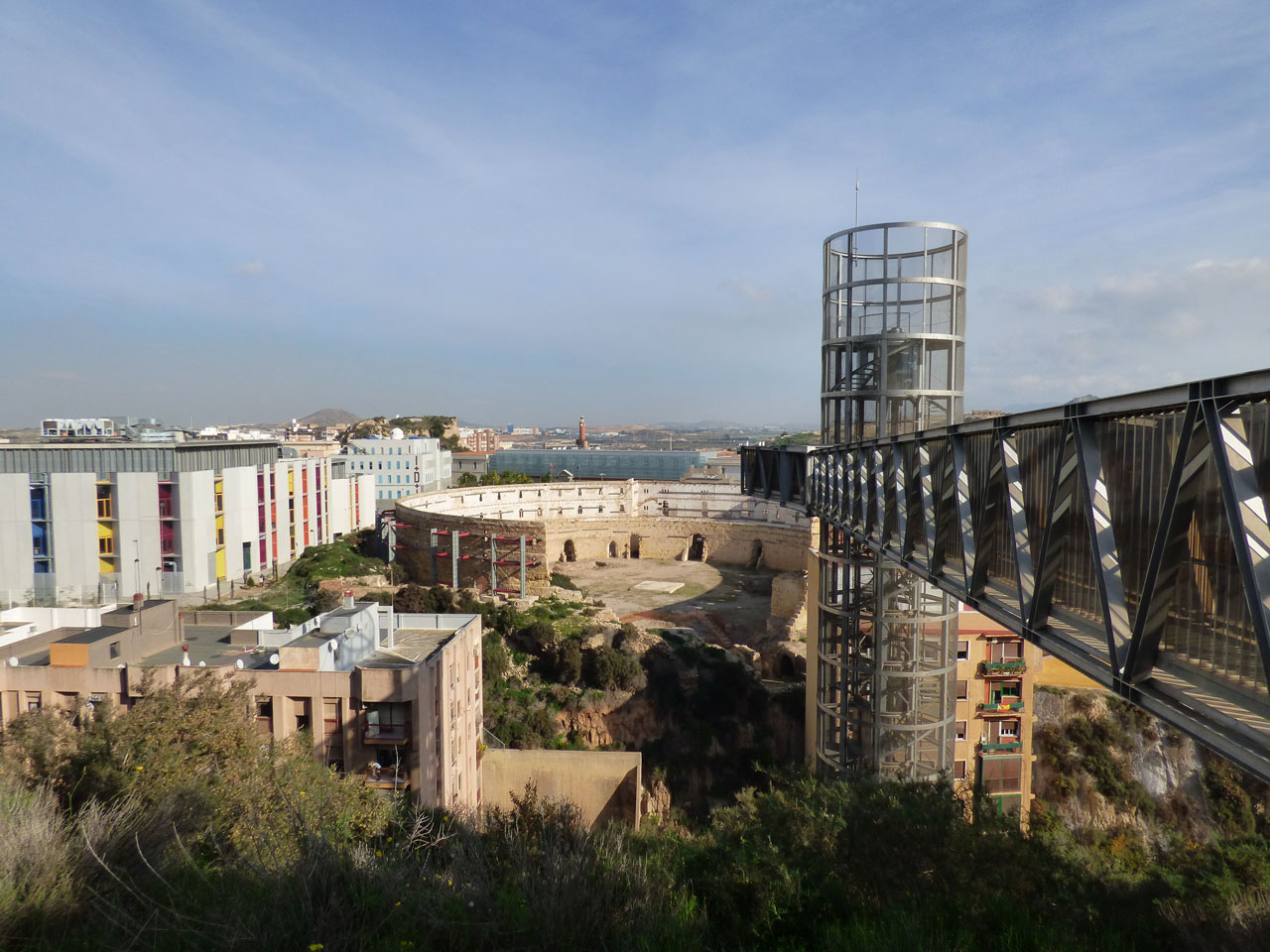 We followed the seafront Paseo Alfonso XII past the Naval Academy and around a corner on to a broad plaza in what seemed like a completely different city. By now we had formed the impression that Cartagena was a slightly grimy port town without much to recommend it other than its interesting history, but here the gleaming marble-paved Calle Mayor was surrounded by some stunning examples of Art Nouveau architecture. Unlike the quieter, more down-at-heel area we’d been in previously, the streets here were thronging with American tourists in badly fitted leisurewear and well-to-do locals dressed in that effortlessly stylish manner at which our continental cousins excel. We stopped at a pavement café for a beer and a bocadillo, watching the world go by in the fresh December sunshine. 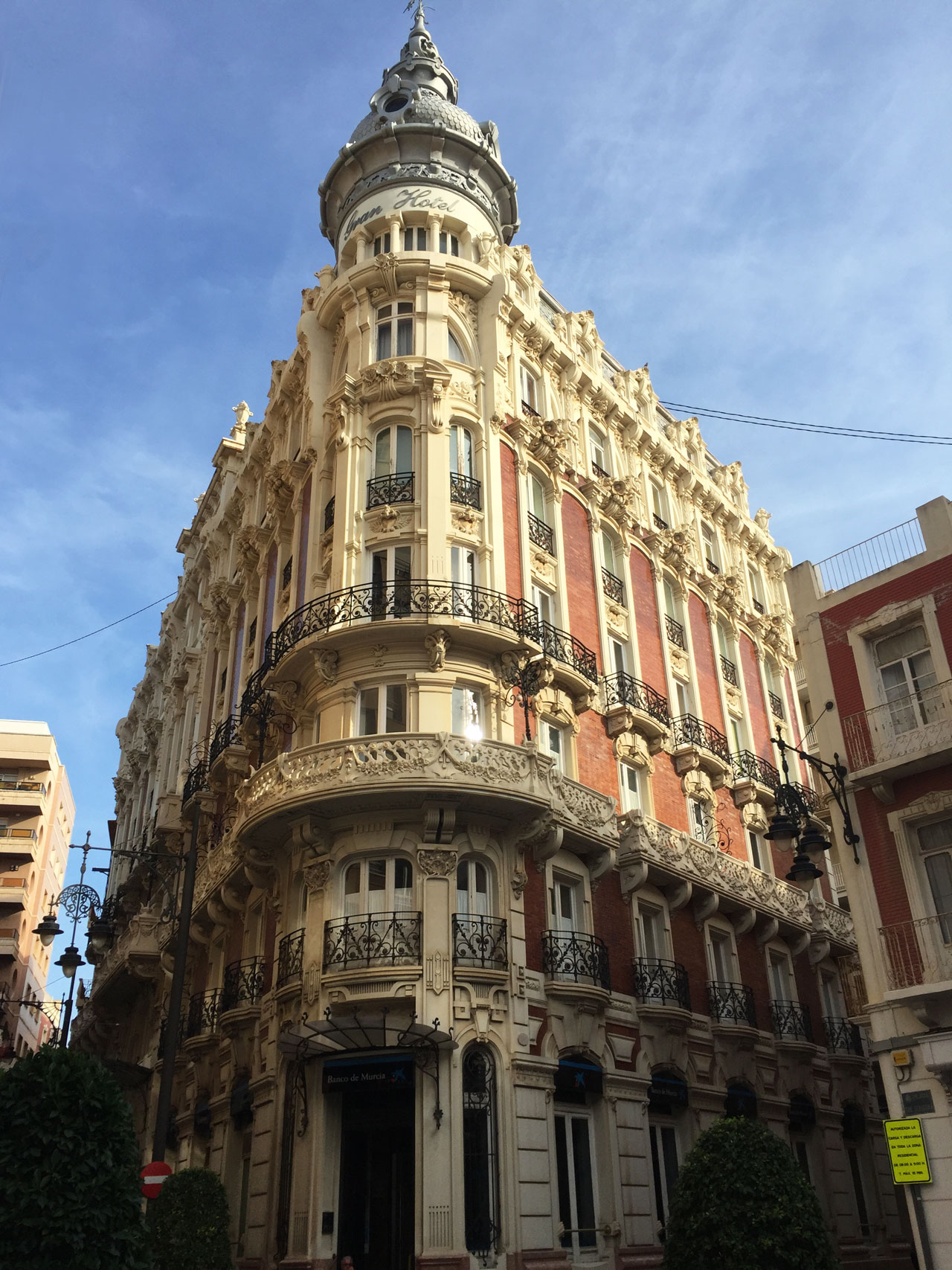 After refuelling we embarked on what we imagined would be a pretty straightforward task, which was to find the entrance to the Roman theatre we had seen from the castle earlier. We followed some steps up the side of a hill and found ourselves above the theatre again, with no sign of an entrance, then back down at ground level, where a fence separated us from the site. A pretty little street called Calle Soledad, where a shrine to the Virgin Mary was adorned with ruby red flowers, led us back to where we’d started, and we eventually realised that the only way to access the ruins was via another museum a couple of streets away. 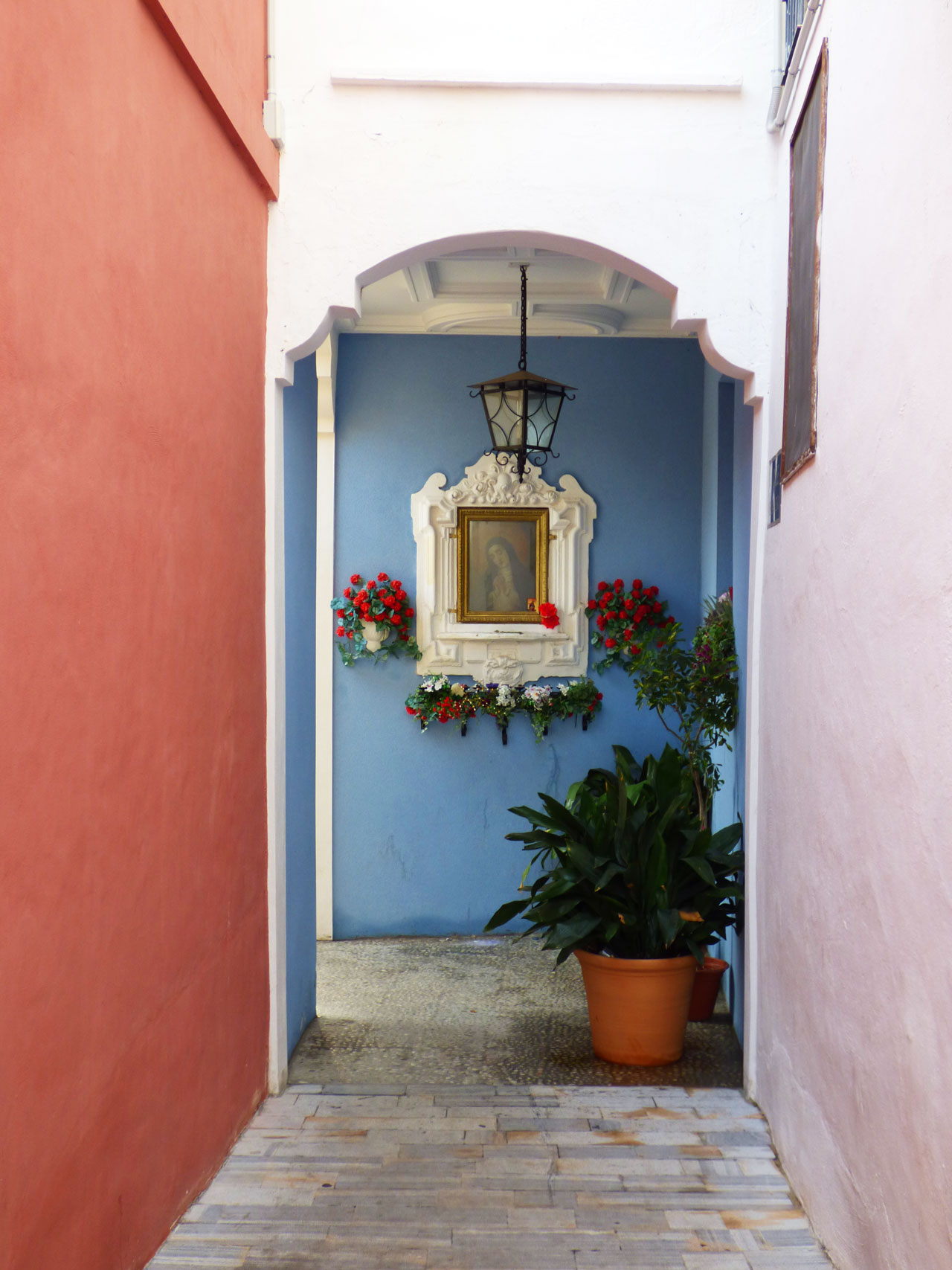 The remarkable thing about Cartagena’s Roman theatre is that it was only unearthed in 1987, having been gradually obscured over the centuries by the old fishermen’s quarter that was built on top of it. Inside the museum there was a fascinating photo exhibition showing how the site looked in the middle of the twentieth century, with no Roman ruins to be seen, just a sprawling barrio of ramshackle houses and a cathedral with its foundations lodged in the upper rows of the amphitheatre. It seemed barely credible that no-one realised it was here; this was not some dusty collection of stones out in the middle of the countryside, but a huge and virtually complete structure slap bang in the centre of the city. It was a powerful demonstration of just how easily history can be forgotten, and a reminder of the transient nature of all civilisations, including our own. It made me wonder how much more forgotten history there is that has yet to be rediscovered, perhaps right underneath our feet, passing unnoticed every day in our own ‘new new cities’. 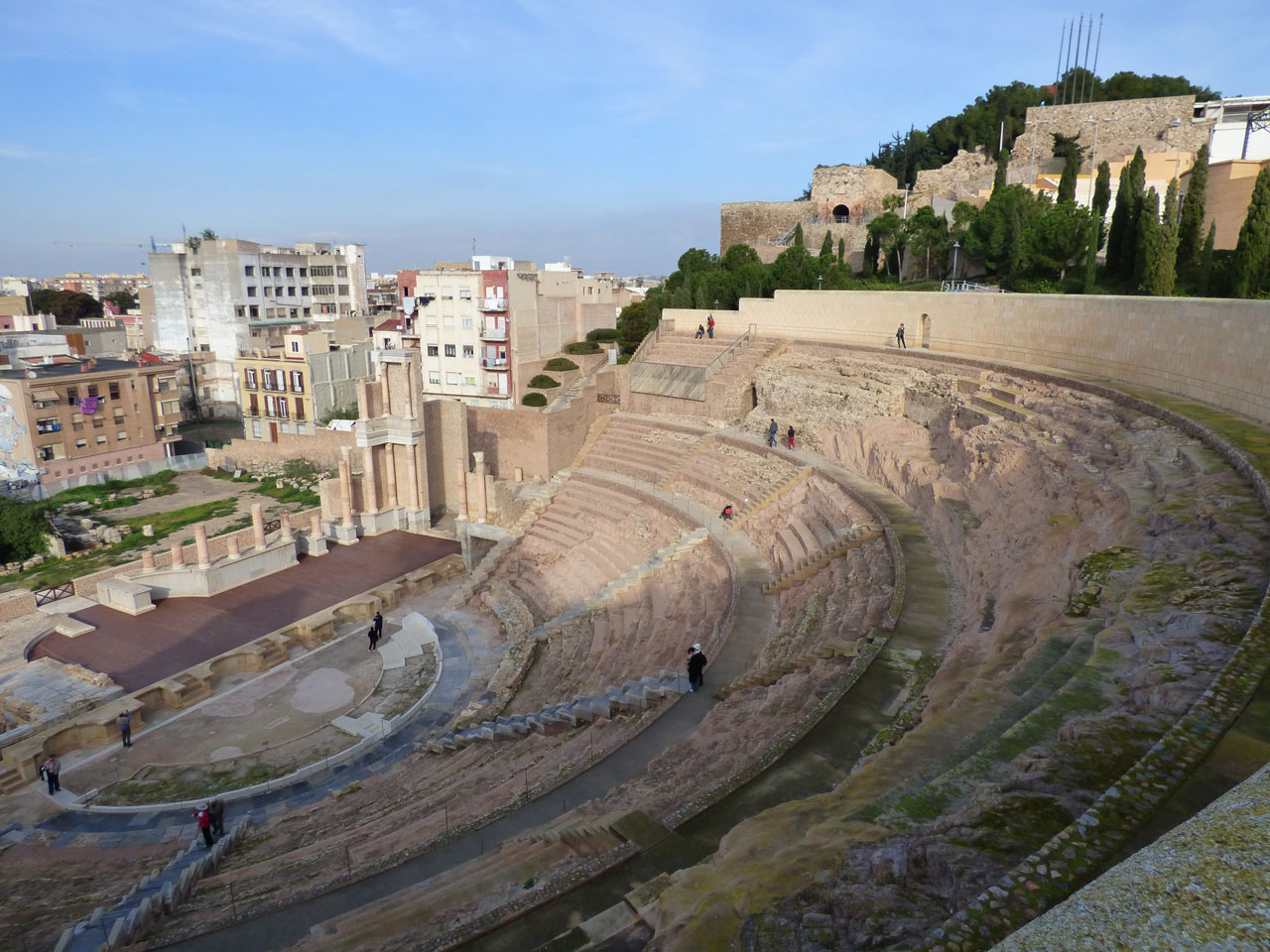 It was a miserable grey smear of a December day in ‘Gib’. After several days travelling the coast of Spain in splendid sunshine, we arrived in this little British enclave to find British

One of the many misconceptions informing the current debate around migration and the Syrian refugee crisis is the idea that the presence of Islam in western Europe is a new phenomenon. Even a

Not Here
—
Cartagena: The new new city
Share this